This was quite a busy week in hanging around in the hospital with Mr. G. He had his first test just to start the week. It was a memory test I didn't want to go in with him but the doctor said yes I could, but after one question she asked me to better go out because he always looked at me for help. I knew ! I quickly left him alone with the doctor, and sat outside in a chair ! After more than an hour he finally came out, still alive, I got a handful of papers to bring to the reception, and had to pay attention not to mix up everything !

After that I had to go food shopping and then I fell on our sofa and tried to relax ! What a day !

The next morning started with the nurse who came at 9 am to help him with the shower and tidy up his room. Of course although he was present and watched like an eagle where she put everything in the evening he complained that he couldn't find anything anymore.

In the afternoon my Scrabble girls arrived we were 4 one was sick and they had forgotten the Scrabble !! We all have lockdown syndroms. Fortunately I had another idea, as we want to start to paint again, but something we had never done, I switched on YouTube on TV and we watched "abstract" art ! This was all new too us and we had a lot to laugh when we saw with what the artists  painted, a barber's brush, wall painting brushes, aluminium foil and even a toilet paper roll ! But when the painting was finished it looked surprisingly very nice ! Mr. G only shaked his head and disappeared in his room.

We had to go again to the neurologist for another memory test. This time it didn't last that long and we could leave sooner. I was so distracted that I first forgot all the papers on my chair and then my purse besides the water fountain ! The reason was that I had a discussion with the girl who took the appointments she wanted to put us end April, but I refused that's far too long. I'll call the doctor directly. More then a"no" I don't risk. But before I had time to call, she had left a message, we have an appointment just beginning April ! Sometimes it's necessary to push people a bit !

Today it's very windy outside and I can see that the first leaves are coming out especially the wheeping willow is getting green ! How nice first spring signs ! 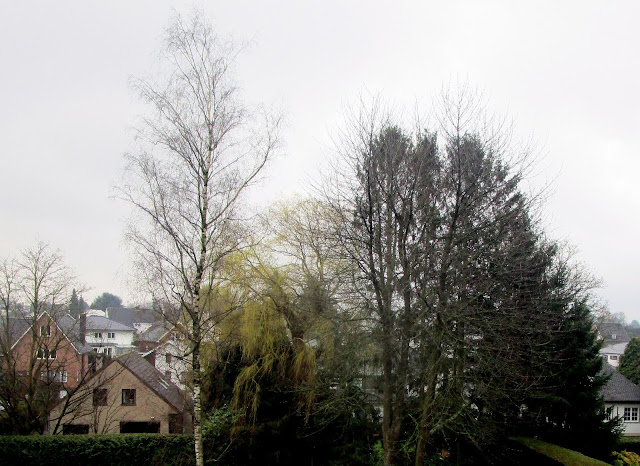 It must have been a very strong wind, because I heard in the news that one of the three 300 years old trees which had seen the battle of Waterloo in 1850 finally fell in the Coronavirus year ! A coincidence ? 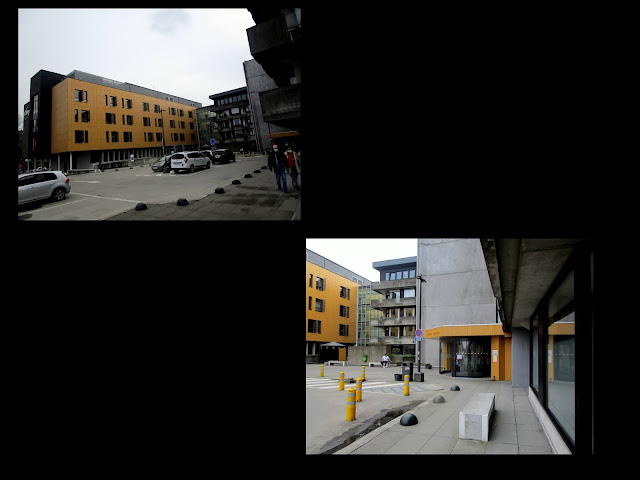 The hospital it's very huge !  here you can only see the entrance.

Mr. G. had invited a friend from his Whist club to play cards. I went shopping because our freezer was empty and I had to fill it up ! Also little Rosie had no food anymore. 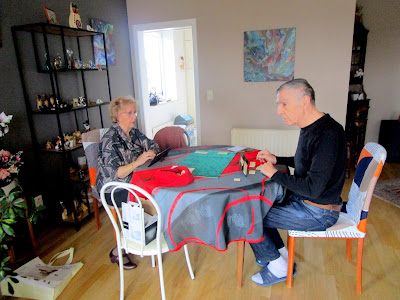 I don't know what they played, I don't like playing games, but these two are besotten ! They played the whole afternoon and were still playing when I came back. 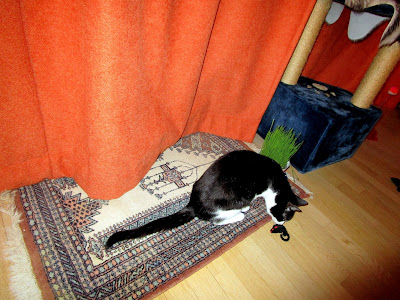 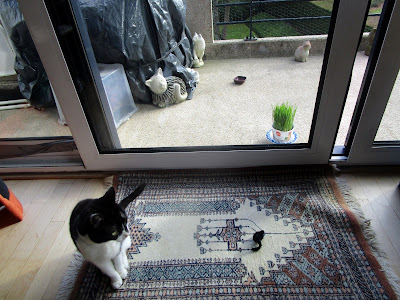 A part from her food I also had bought grass for Rosie as she loves it, probably remembers her the outside times, and also two little mice. I have to keep the old girl busy, she will be 14 in May !

And while the two players still played I surfed through the comments and answered.

It had been a very stressing week for me and I will go early to bed ! Tomorrow no doctor only the nurse in the morning.

more participants at Susanne at Living to tell the Story.
Posted by Gattina at 07:30 8 comments:

1. March 9th is National Get Over It Day...what's something you need to 'just get over already'?

The only thing I wish to get over it very quickly are all the check ups my Mr. G. has to do in hospital and get the results !!

2. Something you're currently 'over the moon' about?

Now ??? in these times where I am still in lockdown although a bit better I am certainly more under the moon than over the moon ! I want my freedom back !

3. What's something you're 'chewing over' these days? (meaning-thinking over carefully)

Nothing, my brain is empty anyway it wouldn't change anything to chew over something, therefore I just wait.

4. The last thing you cooked or ate that was overdone?

I am proud to say that nothing was overdone, everything was always perfect, for the simple reason that I don't cook anymore !

5. In celebration of hitting volume 411 in the weekly Hodgepodge, give us the 411 on something happening in your life in the next 30 days.

First I had to look up what 411 meant. As it is a slang expression and I only learned Queen's English at school, for me it could have been a lottery number. But now I know better and maybe I will see my son and family after nearly a year ! I mean I have seen them on a screen but not life !

I think that each day is the same, the only thing which changes is the weather. Cold, warm, cold, warm etc. If it's warm and sunny you could go for a little walk not a long one because restaurants and cafes are still closed. That's the hardest for everybody.

I let the cats think for me ! 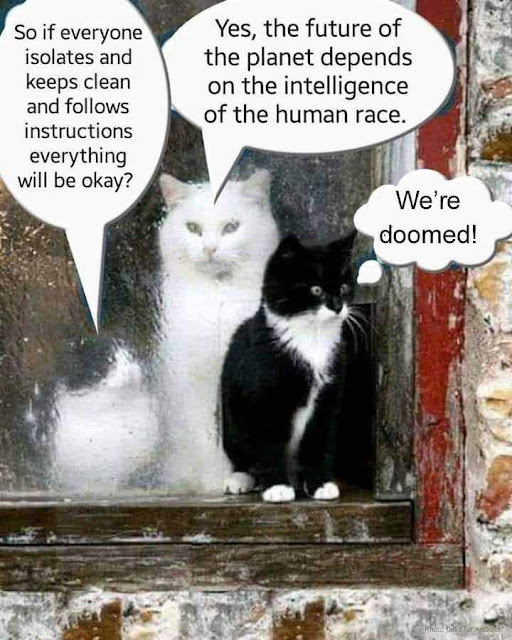 I think so  too 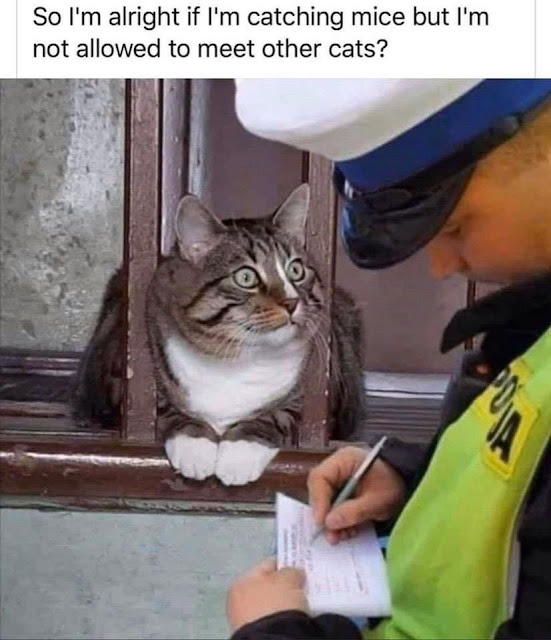 No rules are logical ! 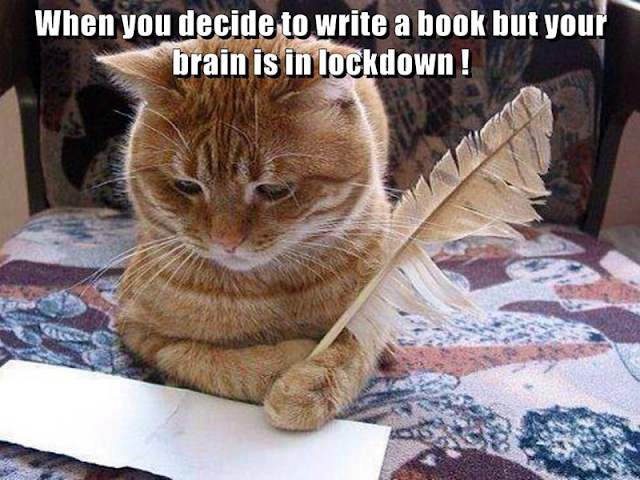 Which is my case

I would have time, but no inspiration ....

The flower carpet and the flower show take place alternately every two years on the Grand'Place in Brussels. 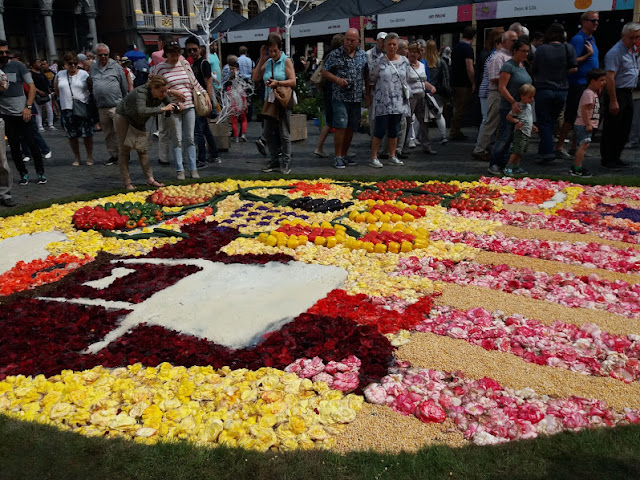 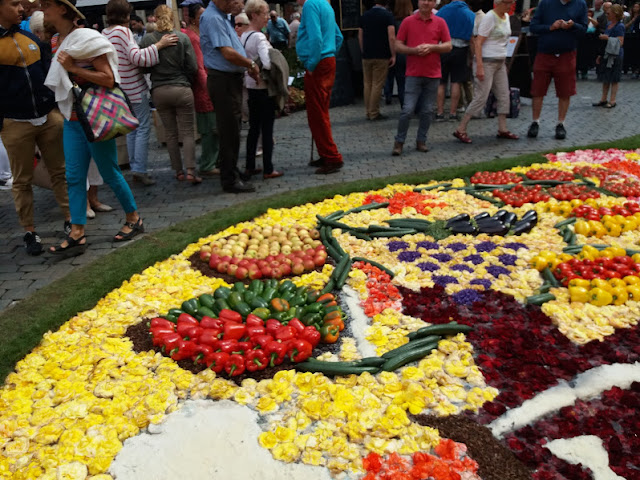 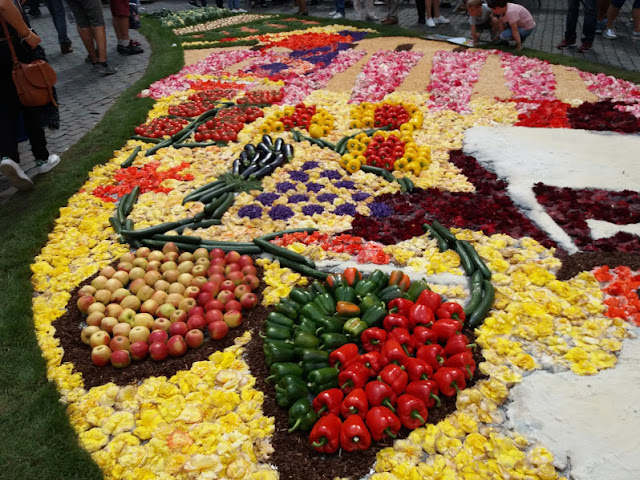 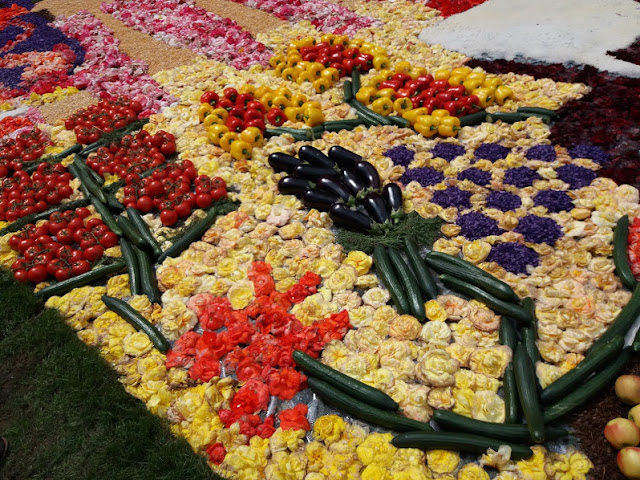 There are also vegetables on display 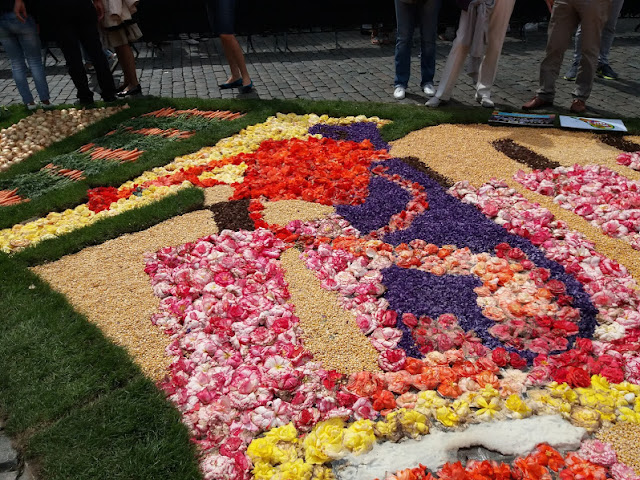 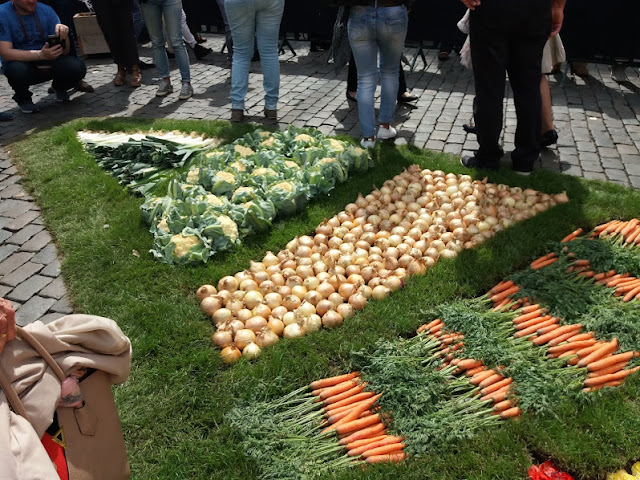 more participants here, and Image-in-ing
Posted by Gattina at 07:00 5 comments:

When our world is normal and without a vicious virus, each year the Chinese comunity in Brussels celebrates it's New Year on the Grand'Place in Brussels. It's always a big event and brings a bit of exotic holiday ambiance.

The dragons and other fancy costumes are so colorful. There are also Chinese specialities which are offered. Not far from the Grand'Place in one street are all Chinese shops and restaurants and is a little China town compared to the once in San Francisco or London.

This year of course it was cancelled so I found a few photos from the years before. 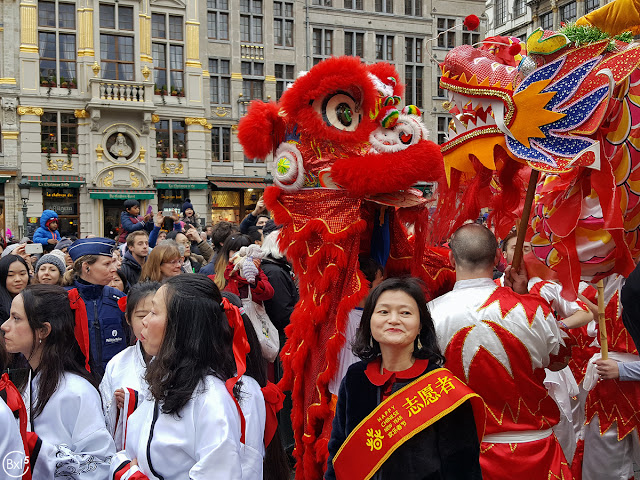 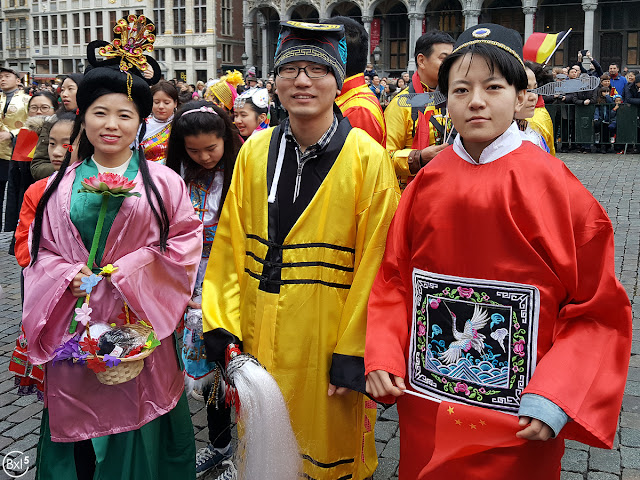 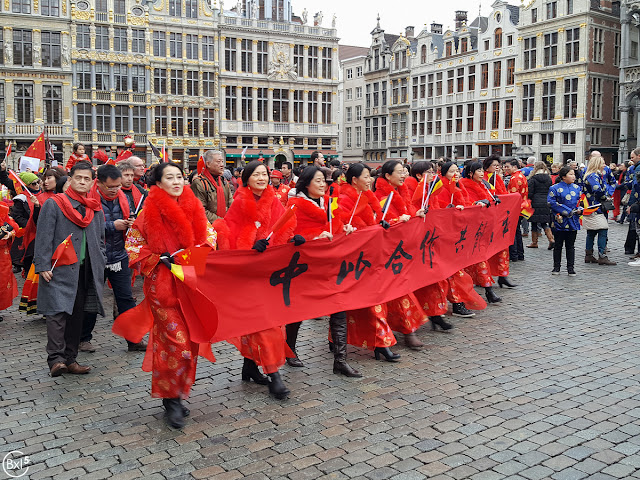 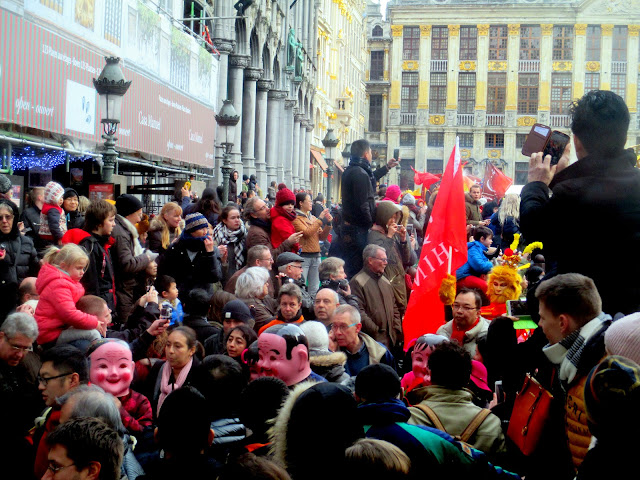 A lot  of people gather 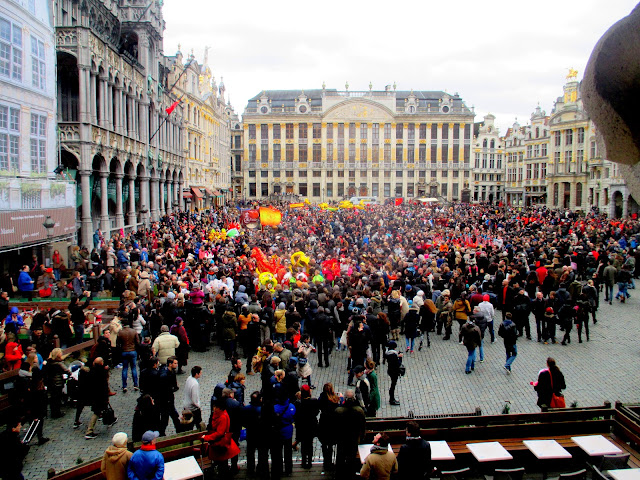 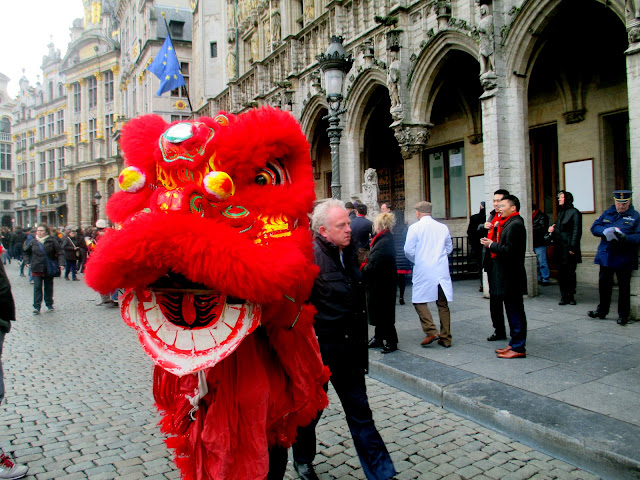 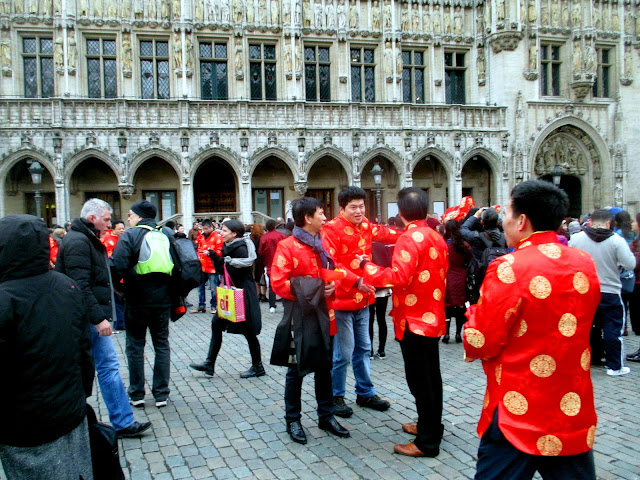 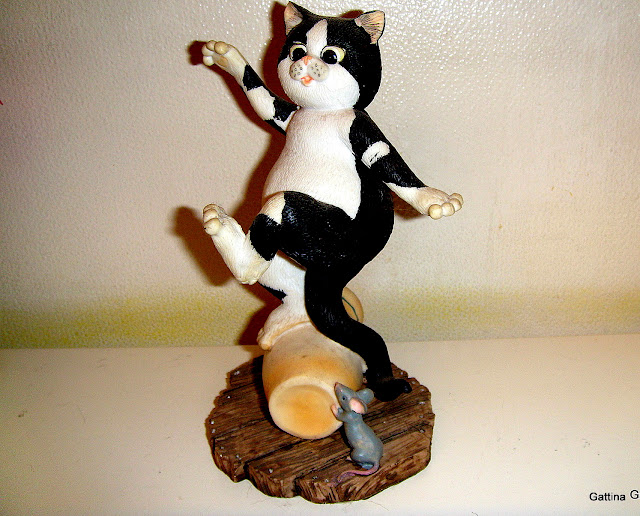 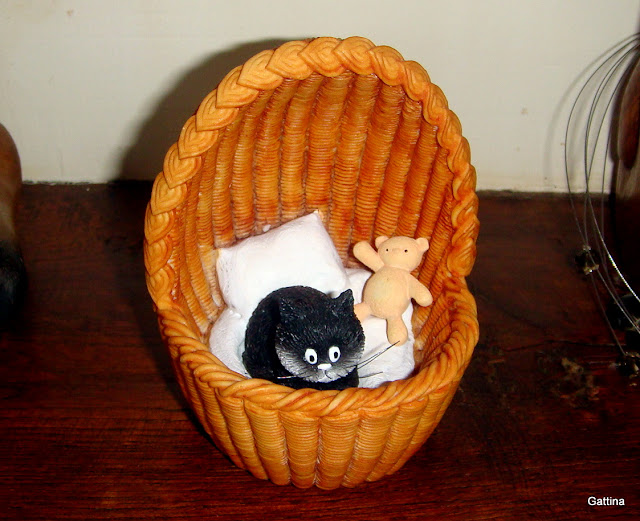 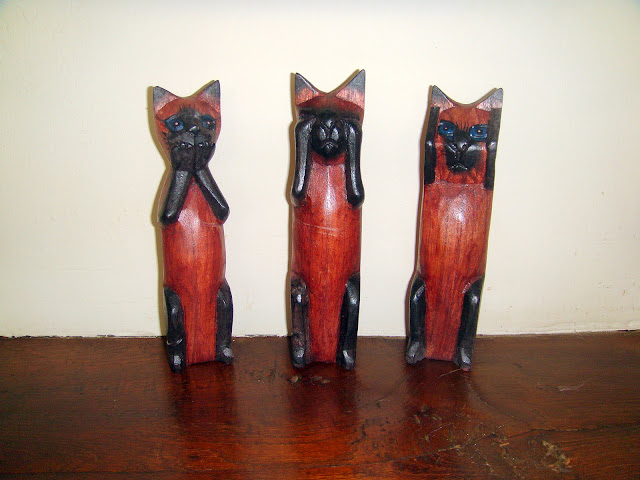 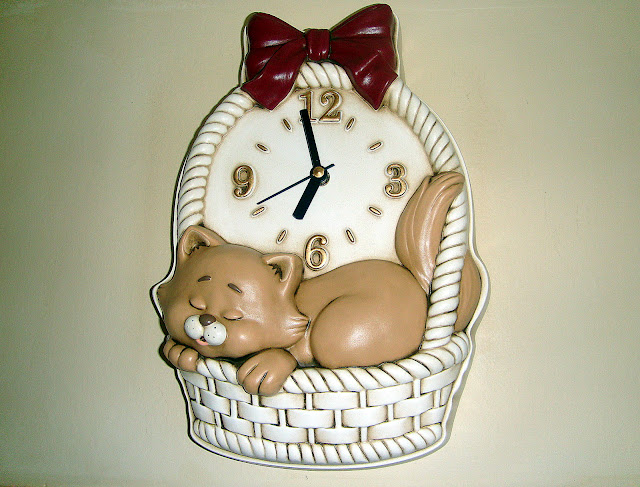 These are some cat figurines out of my cat collection.

Saturday night we went from Africa to the North Pole ! It had been nice on Friday and warm too and Saturday I woke up and looking out of the window saw the park in front of our building in white ! Not snow but the lawn was frozen !

My cleaning lady came as usual and cleaned the house while I didn't know what to do with myself, so I did nothing and surfed on Internet for all kind of things which I needed, would need or perhaps would need  n a few month. Fortunately in the afternoon Mr. G's Whist friend came for a coffee and some chats,  Mr. G. behaved like a robot  and I was worried because he walked so badly and had no force in his hands. I really wait impatiently that he gets through all tests and examinations this month, so that he will finally get the adequate treatment !

Our lockdown hasn't changed much, we are now allowed to meet with 8 people outside of course inside it's still ONE ! But what will you do outside ? Restaurants and cafes are closed and if you have to go to the restroom you have if you are a female to go behind bushes. This proves that only men decide about the new rules. They don't have any problem in this regard, they can even go behind a bin besides a bench !

On Sunday it was rather cold but sunny in the morning. I preferred to stay inside, apparently on our Sunday market there was nothing else then vegetables and food but only clothes which dated from last century, old and ugly. Myriam had called me to tell me it is not worthwhile to go.

Nowhere in boutiques or shops are nice clothes, all probably stems from last year, because as everything is closed why should people buy new outfits ?. The only annoying thing is when you need things for the kids and they don't like the model !

In the afternoon we had our Corona babble meeting, but didn't babble very much, because there was such a nice program on TV concerning an animal shelter in France and as we are all animal lovers we watched the program and chatted at the same time.

Tomorrow the week starts with the first test for Mr. G. and we have to be in the hospital at 9.15 am 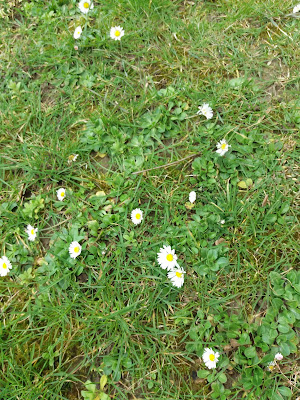 I found the first flowers of this year, just at the front door of Myriam's house ! It lifted my  mood ! Spring says hello ! I wished we would be a couple of month later, because there is hope that the lockdown will be lifted !