On Monday morning I was waiting for our bus which should take us to Malo-les-Bains which belongs now to  Dunkerque in France. From 1891 to 1969, it was an autonomous municipality, before  it merged with Dunkerque.  The main feature of Malo-les-Bains is its 4 km beach on the North Sea, which was one of the sites of Operation Dynamo in 1940 (evacuation of British troops following the German breakthrough).

When we had arrived in Dunkerque, a guide came on board of the bus to explain what munition had been found or still found by children and others on the beach. All things which I had experienced from my childhood in Germany where we also found strange things, and were not allowed to touch them, it could have been a bomb or a grenade, and that was in in 1949, when I started school in Bonn. So I closed my ears and googled for other things about Dunkerque.

We drove by bus around Dunkerque and I could shoot some pictures. There I realized that my phone is not practical at all to make a quick photo shoot, because before I had opened it, gave the code, opened the camera, my object was already gone ! I only could take pictures when the bus stopped. 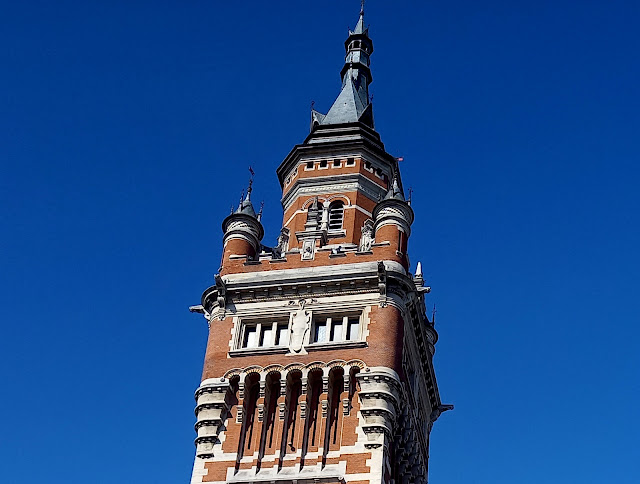 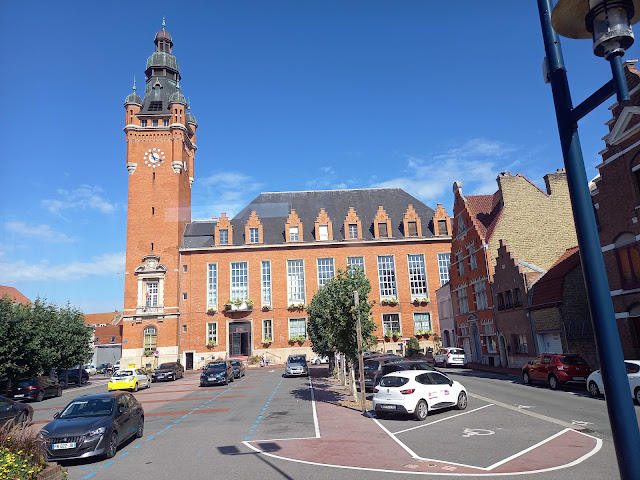 Unfortunately the only picture from Dunkerque was the city hall, because the bus made a halt. 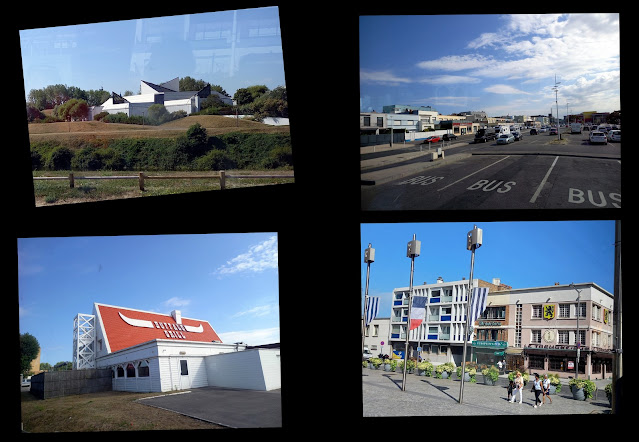 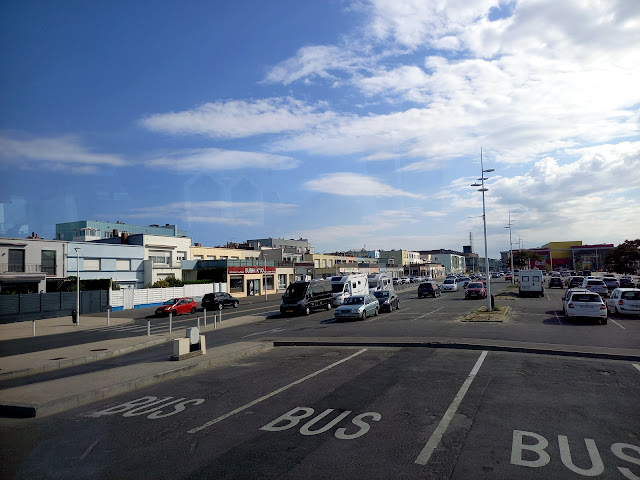 and these modern houses on our way to Malo les bains. 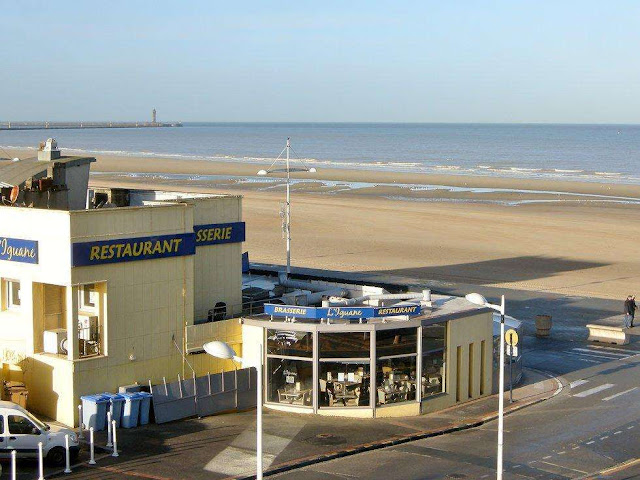 We stopped at the restaurant "L'Iguane" which was located on the beach and from where we could see the sea. There were not many people probably because it was on a Monday. 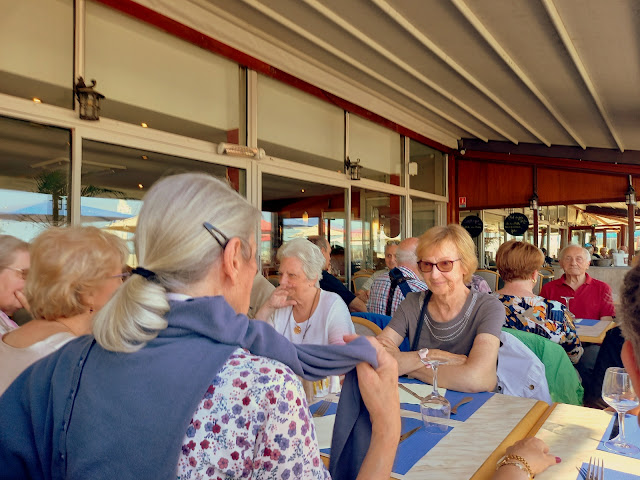 We occupied three table ranges and fortunately I sat with the funniest one. There was a lady and two gentlemen of 90 and 92 who made us laugh all the time, especially when they had two glasses of wine inside ! 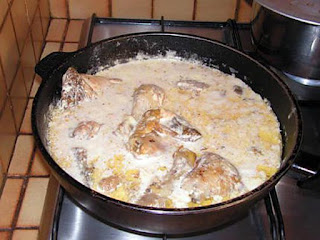 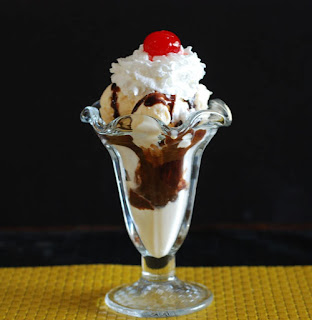 As usual the restaurant lasted far too long, so we had no other time to see something else from Malo or Dunkerque then 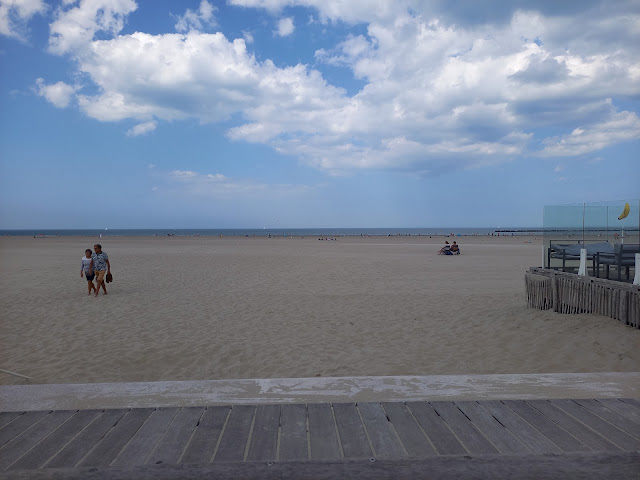 The beach. Honestly I have to say, I was so full from our lunch that I just sat down and watched the people walking by and forgot to take pictures. That has never happened.

Then we returned to our bus direction the Dunkerque port museum. 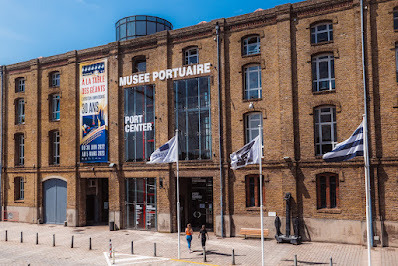 I was a bit reluctant to wander one hour around in a ship museum, with probably again war stories, so I googled and decided that it wasn't interesting for me, but I would follow the others of course.

When the guide started to explain and talked and talked, I was still close to the door and 5 min later I disappeared and went outside breathing the fresh sea air and admiring the huge sailing ship " Duchess Anne" ! I would have liked to see its inside but wasn't sure if I could make it in time, so I made a few pictures and sat a while on a bench enjoying the sunshine. 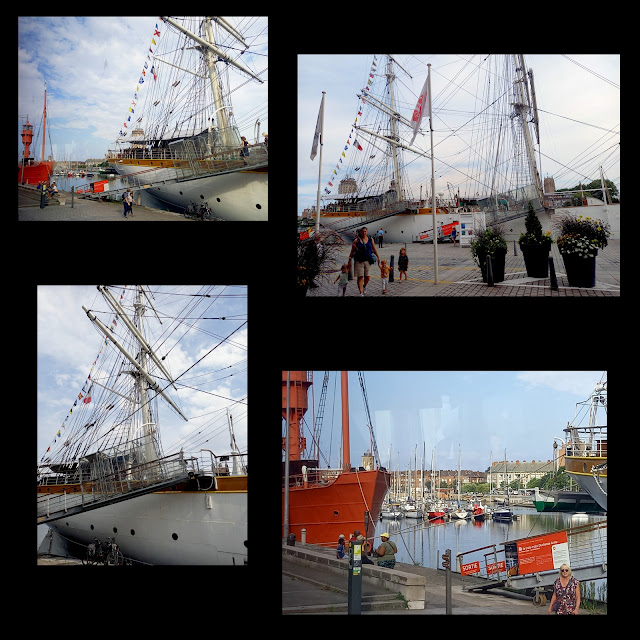 I also saw the habor for the little sailing boats and it looked quite colorful.

When I returned to the museum there were nearly all the people who were with me at the same table outside all sitting on a bench. They also had found it boring. Our two 90 year old oldies entertained us far better and then we all said, you can't keep all that in your mind it's better to google it at home if it is really interesting for the person.

In the restaurant I had met a lady and when we talked about where we were living, it turned out that she is living in the same building as I on the first floor. That was a surprise, so we chatted together and she came with me when we finally arrived in Waterloo and in the garage we exchanged our telephone numbers. I was very tired, was not hungry, but watched a little movie and then I went to bed. I had had no intention to visit Dunkerque, but I had missed the excursion before, so he put me on this trip that way the money wasn't lost.

I didn't know that only now I realize the fact that I grew up amongst ruins and my school was in a metal container, with old wooden benches on which we sat to 3. We were 80 six or seven year old in one class, boys and girls together, but we still learned to read and write. Strange that I had never thought about that until now, when I heard the explanations about Dunkerque. 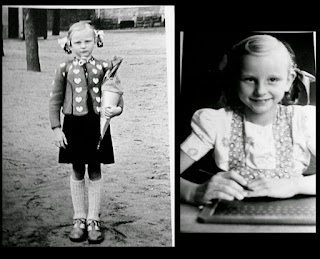 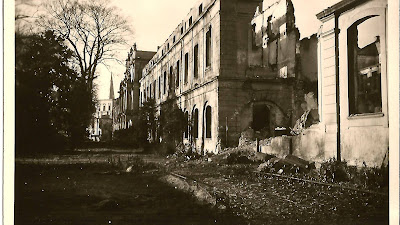 That's me when I started school at 7, and a similar looking street I took to go to school in Bonn where I lived (stolen from the net)

The next day I had to recover, it was again very hot, fortunately for our excursion it had been ideal, 23°,  I had to buy some water and food for little Rosie and then returned home.

I spent my time on the phone, with the pension office, apparently there are papers missing and I had to fill in some questionaries (again) asking the wedding date of my son (??) and his profession. I wonder what that has to do with my pension ?

I also called my friend whom I know also over 50 years, now her husband my has a general cancer, we once used to work together and our husbands were friends. He starts to have the same signs as Rick, I can't help him, but I can help her distracting her and supporting her which she has done with me. All the other "so said friends" have disappeared, it's just like in India where a widow was considered as "dirty", and burned. Fortunately not today anymore, but that's not so sure because on the country side in hidden little villages, there is no control.

The week ended with an internet glitch, that's why I'm so late. Until it worked again, I went to Adeline who couldn't watch TV and we exchanged the latest news!

Probably about the weather, from this theme on you can waffle around the whole world, talking a lot and saying nothing ! 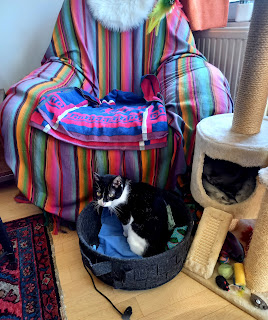 or about my little companion, as she does marathon sleeps, it's easy to waffle on her

To the Waffle day, I live in a waffle country, in fact these two types of waffles are national dishes. Belgium is famous for its waffles 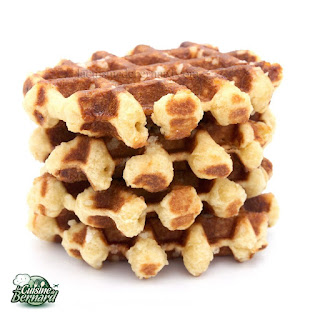 These are the Liege waffles, served usually with powder sugar and whipped cream

2. Do you like waffles? Make your own or 'leggo my Eggo? Any favorite toppings or add-ins? Waffles or pancakes-which do you prefer?

I like both, they are not comparable to me 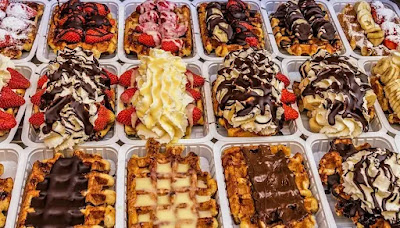 These are the Brussels waffles which you can decorate as you wish there are so many recepes and they are all delicious.

3. Do you have any momentos from this summer (or past summers)? What do you do with them?

No, I have nothing, the last two summers were rather awful for me. Maybe one thing I found in a file and which dropped on my feet, was the wedding band of Rick, which had to be cut off before a surgery, because his finger was too thick to take it off. I didn't know that he had had it repaired but still couldn't wear it, now its me, I found a finger to put it on ! 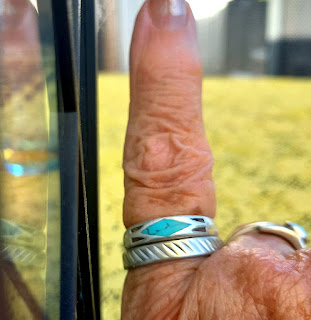 4. One thing you'd like to do before summer ends?

Go to the sea

5. Life is too short ..... to get angry at people who have no behavour  and pretend not to see a person they know very well, just because they are cowards,

Besides the fact that I am still getting letters from different administrations, which I sent per email to my notary, I started to think about my future. I have lots of plans in my mind, but for the moment there are still school holidays and Belgium sleeps. In fact the whole country sleeps for two months and that's probably why I get double and triple administration letters. Reminders of things which have been done it's a shame ! But as you say life is to short ....

If you have difficulties to comment, just scroll down to :
Subscribe to: Post Comments (Atom)
click on it and then you can comment !
I have the same on other blogs and it took me quite some time to find out !
Posted by Gattina at 06:30 4 comments:

Our son (a professional photographer) wanted to make a picture of his parents for the eternity ! During a few hours this was the procedure ! 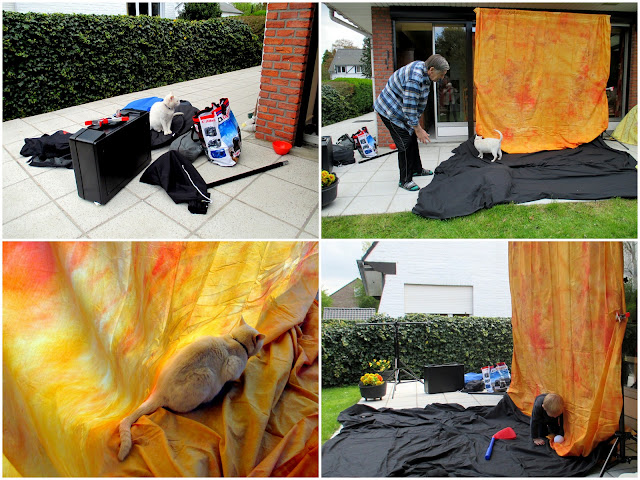 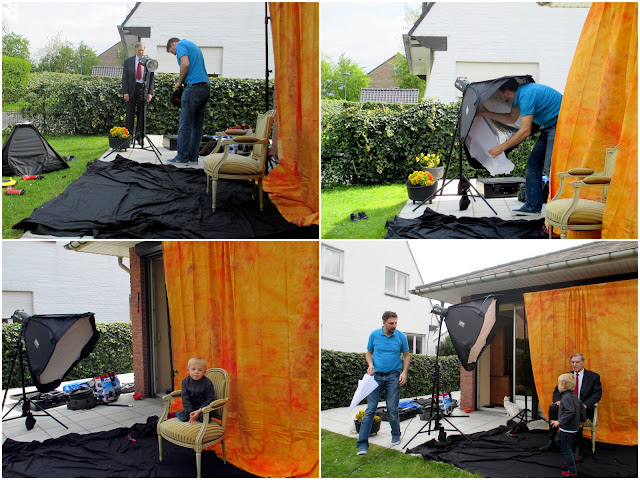 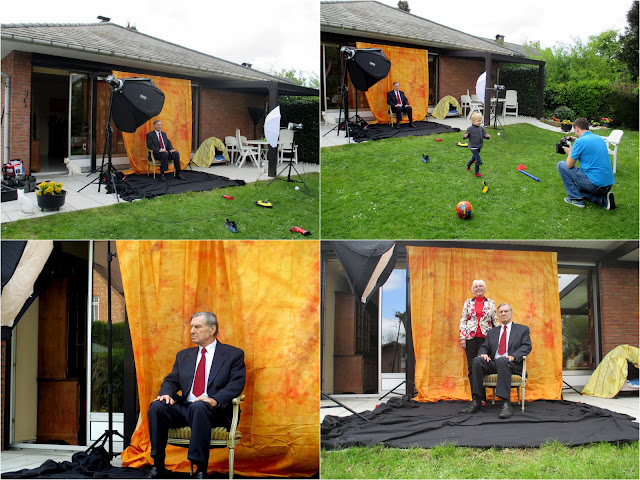 The master of the house sits there and waits, while the photographer fixes his camera for shooting
and the result is hanging on a wall now 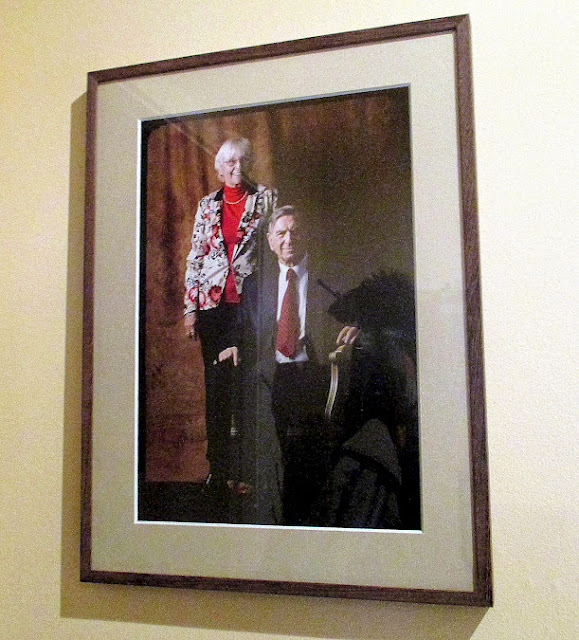 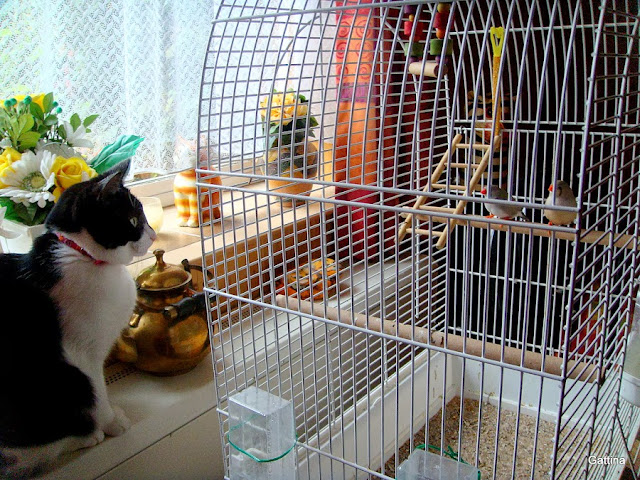 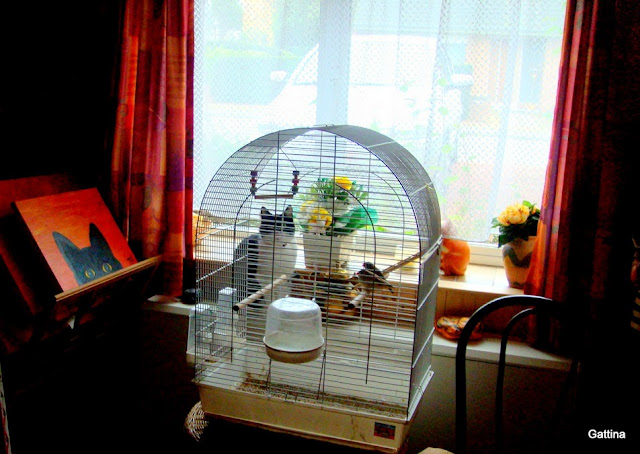 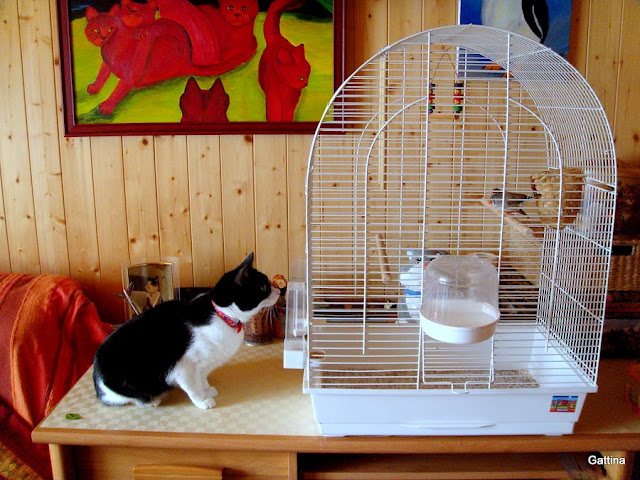 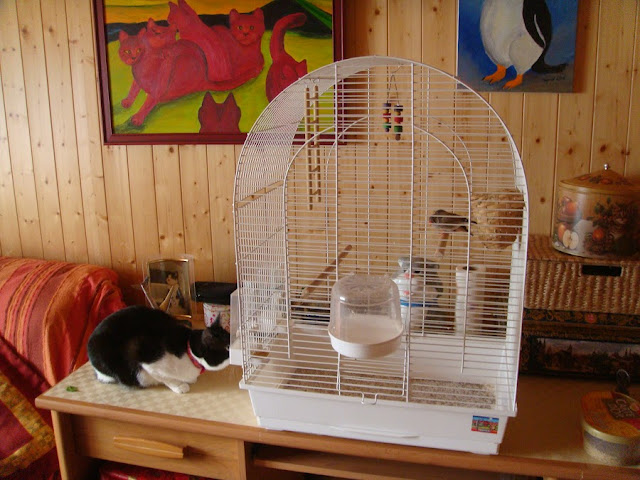 My son had his birthday on Saturday, so I called him to wish him a happy birthday. He told me that I wasn't the first one, which had been Toby who came into the kitchen opened his mouth to say Happy birthday and vomited on his Dad's feet ! I imagined the scene and had to laugh ! Never got such special birthday wishes. Poor Toby was sick, he probably had eaten something which his stomach didn't like ! 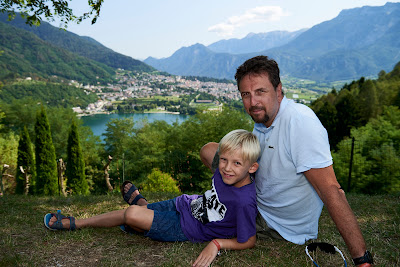 This was the last year for him starting with a 4.. and for me with a 7 ,,, next year we have to celebrate two important birthdays ! 50 and 80  ! Can't believe it ! The picture was taken at the Garda lake, two years ago.

We will celebrate our birthdays together when they come in September.

For lunch I had an appointment with my Facebook friends and of course we all ate mussels with Belgian fries, (wrongly called French fries) and a beer. The mussels were excellent and you could eat as much as you wanted for only 16 € (16 $). The first time I see that the Euro and Dollar have the same value !!

Sunday was a lazy day, on purpose, because tomorrow I have to get up at 6 am, because I do an excursion to  Dunkirk in France, and I will be away the whole day.

So today I made collages and was busy with my photos. It was nice and I could sit the whole afternoon  on the terrace. I also went to Adeline to tell her that I am away, so she can see Rosie which she loves dearly. 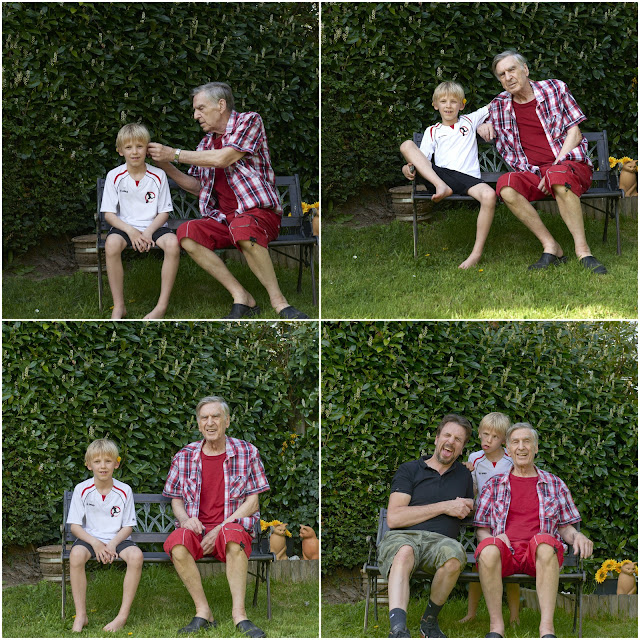 My three men only 3 years ago ! One of the collages I made.