1. Now the week starts nicely with our Scrabble club. We are 5 in total and that is OK. This time we were at Mireille's home. She also lives in Waterloo in a condominium on the last floor. Unfortunately the view is not that nice because it's close to a supermarket. We had a nice afternoon and a miracle happened, I won !

2. After the dermatologist had read the results of my blood test and noticed cat allergy and I don't know what else, that I thought my end is near, I went to my house doctor who is a cheerful lady and very efficient. I like her very much. I told her what the dermatologist had told me and like me she laughed ! She said I don't have to worry about anything, she too is allergic to cats and all the other stuff, that most of people are and as long as I don't suffer from any symptoms I don't have to do anything. We chatted a bit and then I left with a prescription of a crème in case these strange rashes would appear again. So far I had nothing since 3 weeks.

3. Nicole had to go to the Technical Control with her car. Cars are inspected and controlled after 4 years and then every 2 years. She asked me to come with her to "hold her hand" because she doesn't like to drive alone to places she doesn't know, despite the fact that she has a GPS, but it doesn't help, it confuses her, and I can't drive without it !

The weather was wonderful and we arrived problems. I had never been there, because my car is not yet 4 years old and the Contole Technique had moved to another place. 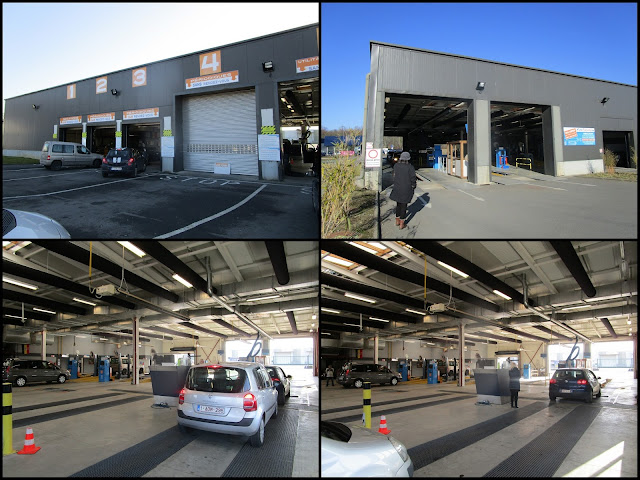 Compared to that what we had before the "Control" was huge and very modern. We didn't have to wait a long time and then the car was driven through and when the inspection was finished Nicole paid and we drove away.

4. For the first time this year it was so warm that we could sit on Nicole's terrace. It's a real sun trap. Of course not yet in shorts, but we had to take off our coats. 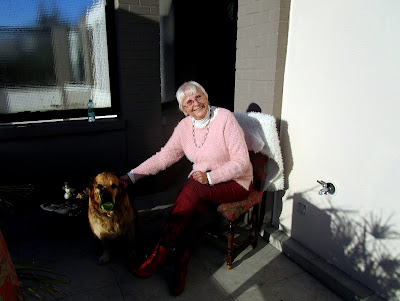 After my aqua gym a sun bath was wonderful ! We spent the whole afternoon there. We took her dining chairs outside, because the garden furniture is still packed for the winter. 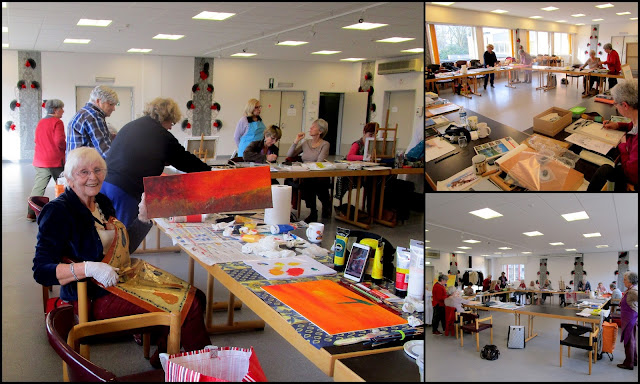 In my painting course I continued to paint with my fingers, and finished the second painting. We were nearly all there and as usual had a lot of fun.

I had to go out in the afternoon and as it was so warm, 13° for February, I did a little window shopping, but without any result.

more participants here at FIVE ON FRIDAY
Posted by Gattina at 07:00 21 comments: 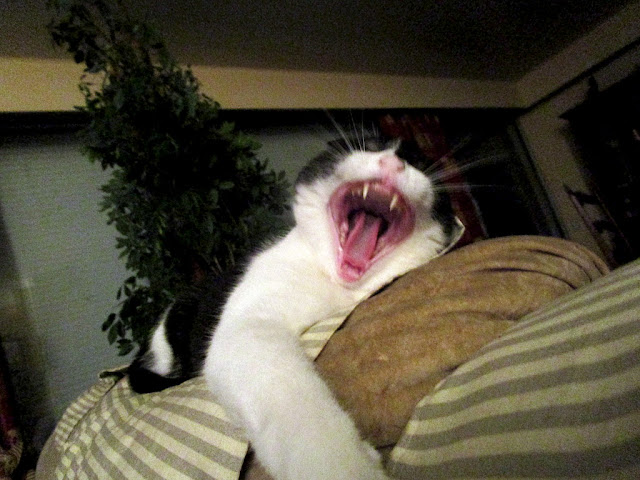 2. Ever taken a road trip along the California Coast? If so what was the highlight of your trek? If not, any desire to do so? If you were to take a trip along the California Coast what's one attraction you'd have on your must-see list?
We did that a long time ago from Los Angeles to San Francisco I think it was in 1994. The last time I have been in the States was in 1997 when my aunt died. Ever since I didn't return and certainly not now.

3. What are three things you don't know how to do?
crochet, knitting, sewing, although I learned it at school !

4. Tom Peters is quoted as saying, 'Celebrate what you want to see more of.' If that's true what will you celebrate and more importantly, how will you celebrate?
It all depends what I am celebrating ! Besides birthdays, Easter and Christmas I don't see anything to celebrate.

5. Thursday (February 16) is National Almond Day. Do you like almonds? Which would you prefer-an Almond Joy or a macaron? What's something you make that calls for almonds?
I like Almonds and the taste of almonds, but it's not my favourite flavour.

7. Share with us a favorite book you've read this winter.
I haven't read a book, but blogs from blogfriends from 2006 on when I started blogging. It was and is very interesting !

8. Insert your own random thought here.
I am planning the day, because the sun is shining (for once) and a friend and I want to go to the next town Nivelles, where a flea market takes place !

When the weather is nice we often have spectacular sunsets or sunrises, I would say even more beautiful then elsewhere. 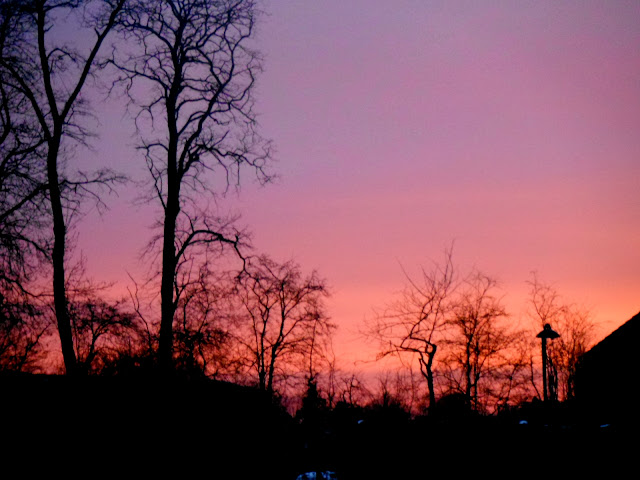 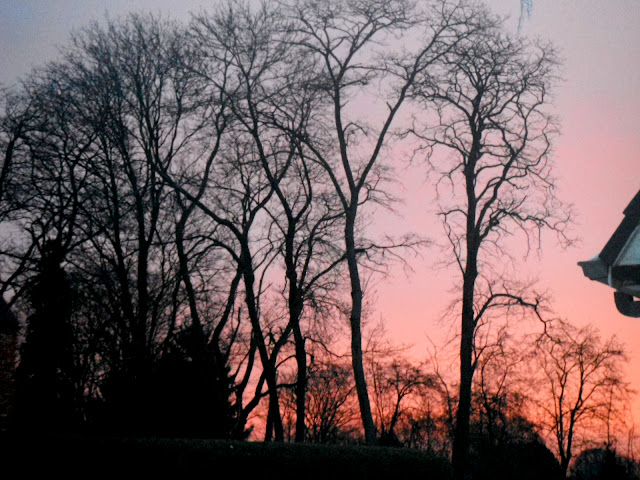 The sky can be from dark red to dark violet and sometimes with golden lines. 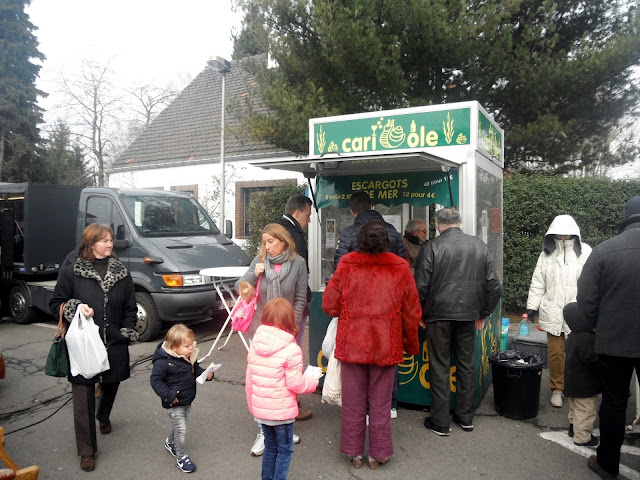 Very much appreciated when it is cold are snails in Belgium. There are stands on the markets which sell them, you get a plate with 6 snails and a garlic sauce. 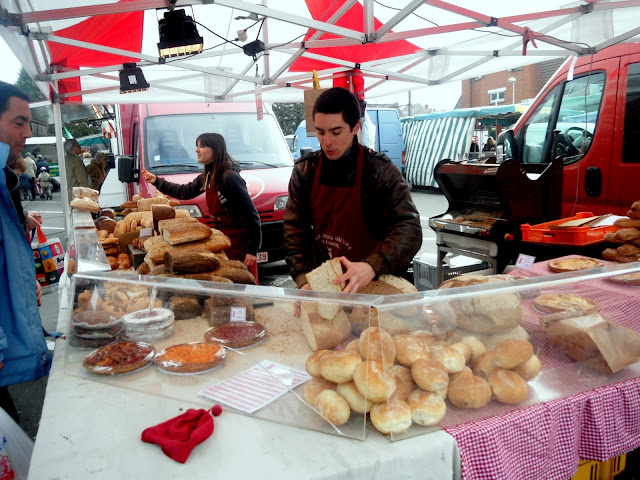 Fresh rolls are called "pistolets" in Belgium. Only later I learned that this name came from a one coin pistol which was the money's name and a roll costed one pistol. Since then the name remained pistolets. 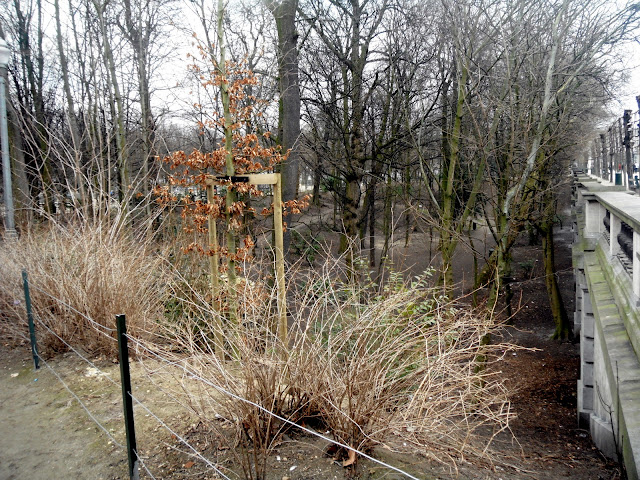 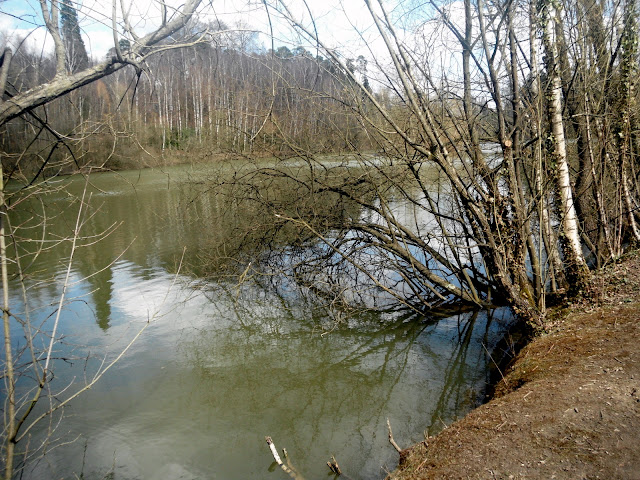 The nature is still naked and the trees and shrubs are waiting for their green dress !

When I opened the shutters on Saturday morning, it was snowing ! Snowing is a big word, a few watery flakes dropped from heaven, but steadily the whole day. In short it was cold and wet outside. Really not a weather to go out if you don't have too. So I did like last weekend, I put myself on "energy saving mode", with a jogging and didn't leave my computer desk and later the TV the whole day.

No, I forgot I spend an hour with Nicole on the phone, she was in the same state on top she is still ill with a cold and would have died for going out. She hasn't discovered the fun of a computer yet, so she doesn't know what to do with herself, if there is nothing to do in the household. In short the opposite of me.

I also googled for an interesting trip this year and found something, a cruise around the British Isles for 10 days ! Now I have to see the details. But dreaming while looking at the pictures, is also nice.

On Sunday it wasn't better ! I had taken a pill against the itches, before I went to bed, because I had got another red patch showing up after at least a month.  I put a cream on it and it went away after about 15 min. These pills apparently made me sleep until 9.30 and I dreamt confused stuff, of people I hadn't seen anymore since ages and places where I had been when I was 20 ! When I finally woke up I felt completely upside down, a strong cup of coffee made me feeling normal again !

I baked a bread, by putting water, oil and flower in the machine and pushed the button and then I folded the laundry I had done yesterday, and that was it.  I disappeared again behind computer and TV.

Mr. G. had been on the market and brought home a roasted chicken with mushrooms and roasted potatoes for our supper, which made cat Arthur sitting in front of the cupboard and meowing for at least half an hour, he smelt the chicken ! This was the only noise in the house (in the morning) ! 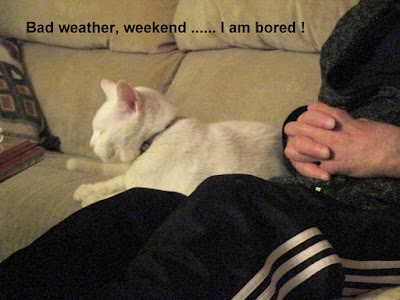