1.As usual now we started the week with our scrabble group. This time it was Mireille's turn. 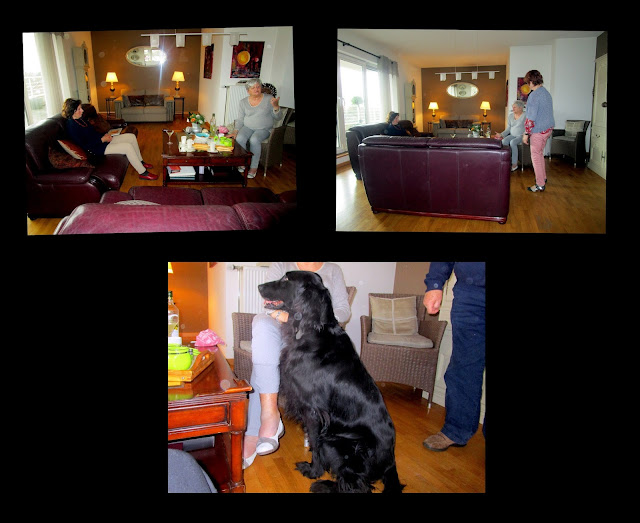 Here we are during the coffee break and her dog Tosca waited for cookies of course. Ilona who had been a beginner and had lost, was now the best ! I am not a real player I don't count, to make the most points so I was not the last but just the second last ! Mireille and Nicole had a glass of Limoncello, which is a very strong liqueur (45 %) with their coffee and they became very joyful and had red cheeks. We laughed a lot. 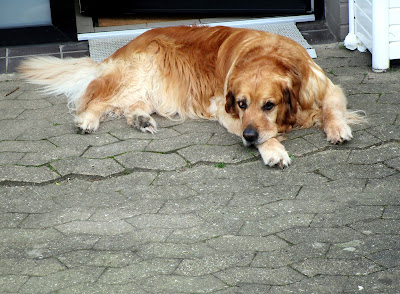 Nicole was very worried about her Charlie because he had like a white skin covering half of right eye. First the vet thought it was conjunctivitis and had prescribed an ointment, but now it turned out that he possibly has a tumour behind this eye ! Nicole was devastated and we all tried to comfort her as Charlie is as usual, plays and eats. On Monday she will get the result. Hopefully it's just an infection !

3. The spring weather continues and more and more flowers come out and the trees start to get green. But still I am not myself, so after aqua gym I decided to go to Egypt, and stay in my "second" home the Sunrise Resort for a week. Unfortunately it was already fully booked and I just could get a week from May 5th on. Now I have something to look forward too ! Sun, see and swimming !

4. The up and downs in the temperatures have caused a lot of colds and flues. 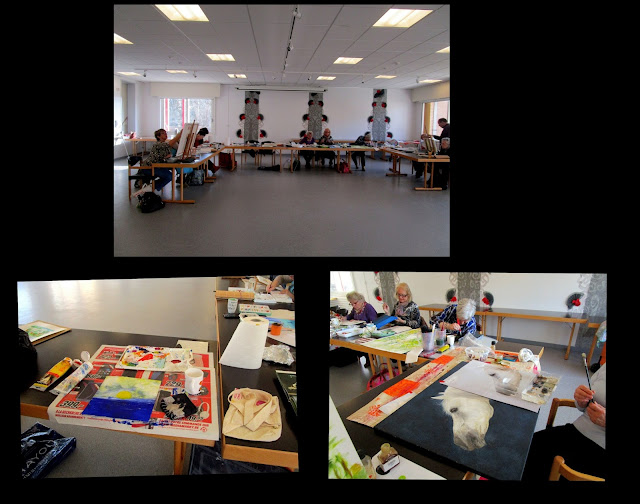 We  were not many in our painting class but had as usual a very nice time.

5. It was a happy day for Mr. G. his new car has arrived, a little Toyota Aygo, which is perfect for what he needs. 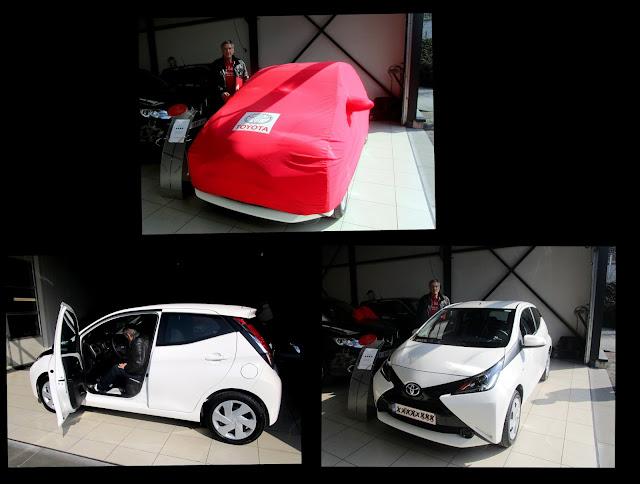 The car was wrapped in a red tissue and looked like a huge gift ! The salesman unwrapped it and explained all functions. I was impressed by the screen on the dashboard which showed the whole street when you went backwards. I had seen that already in big cars but had never thought that such little once were also equipped with these screens and you didn't have to pay a supplement.

As Nicole lives near Toyota, we went to show our new little jewel. She found it very cute and offered us a glass to celebrate the new car. Unfortunately Charlie was not himself at all, he didn't even get up to say hello. I only hope that  he is in this state because of the strong medication he gets and which probably makes him so groggy. 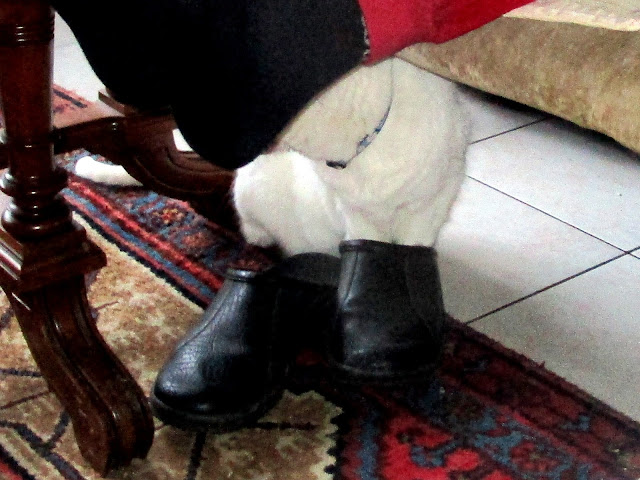 Trying to hide in the shoes 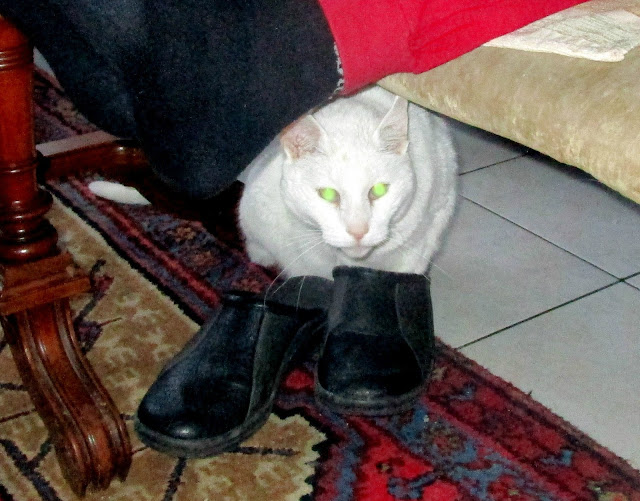 COLOGNE AROUND THE STATION

When I visited my old schoolfriend from 1951 (!) we wanted to make a tour in Cologne. It had been a long time I hadn't been in Cologne which I had known in my childhood. But then it looked completely different as it had been severely damaged during WWII and there were still a lot of ruins around. 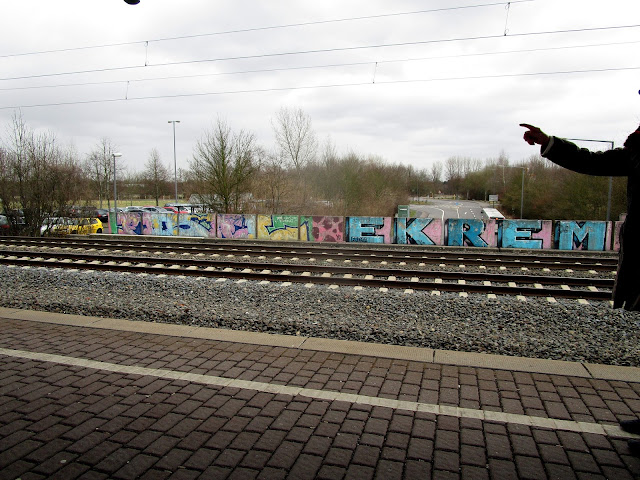 We left the car outside and took the train and as in each city here too street "artists" had done their work. 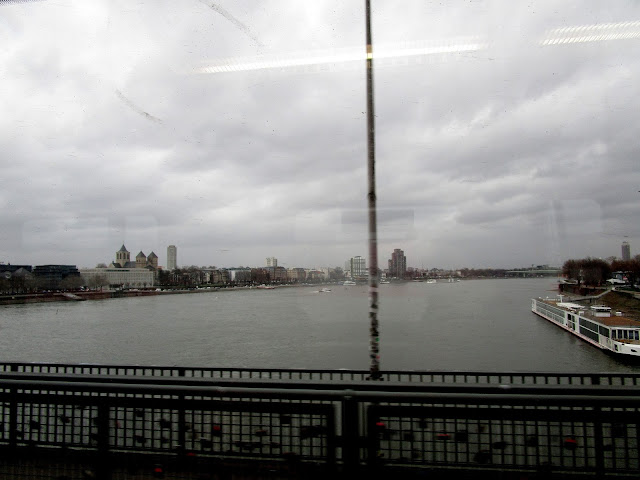 My beloved Rhine looked all grey 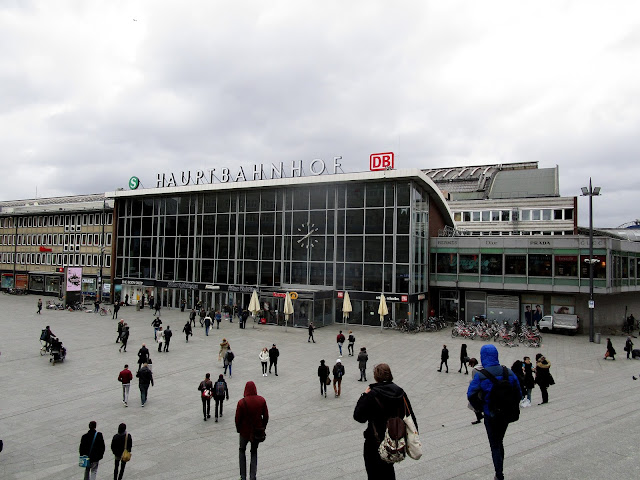 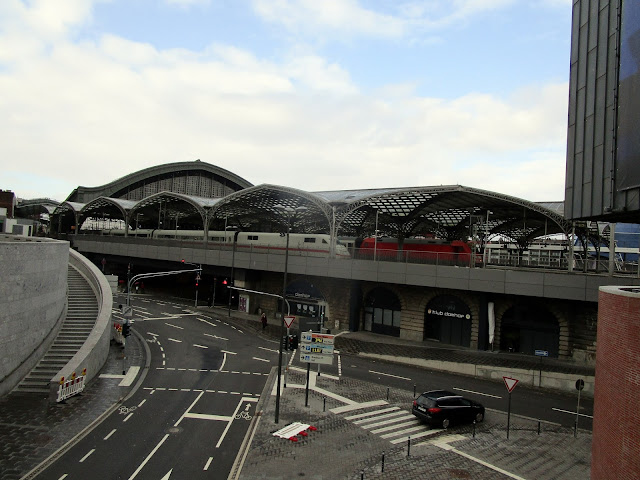 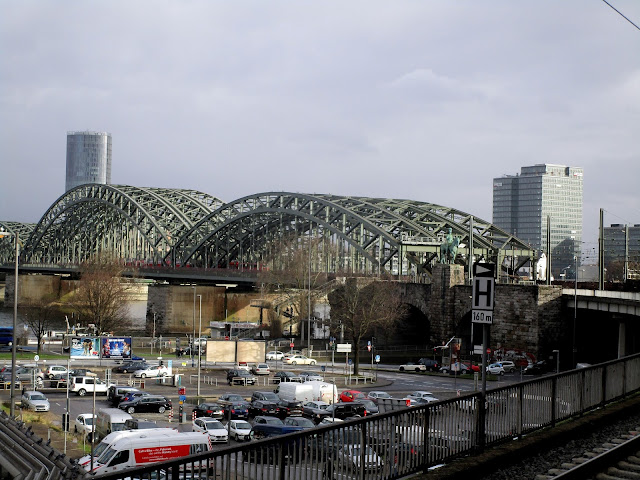 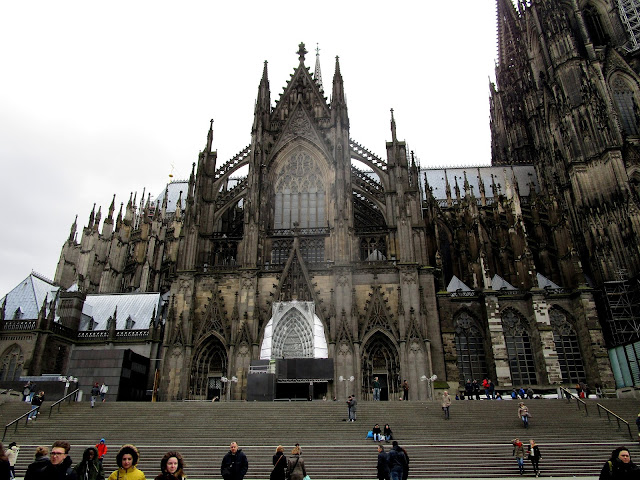 I tried to make more pictures but it was impossible, the wind was so strong that you could hardly walk ! 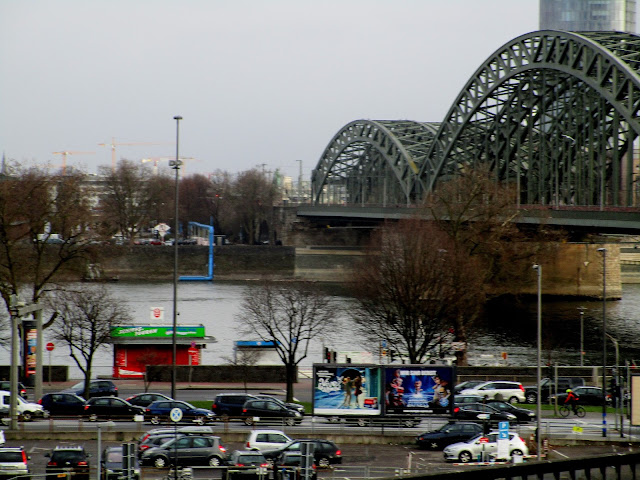 But I could take a picture from the Rhine 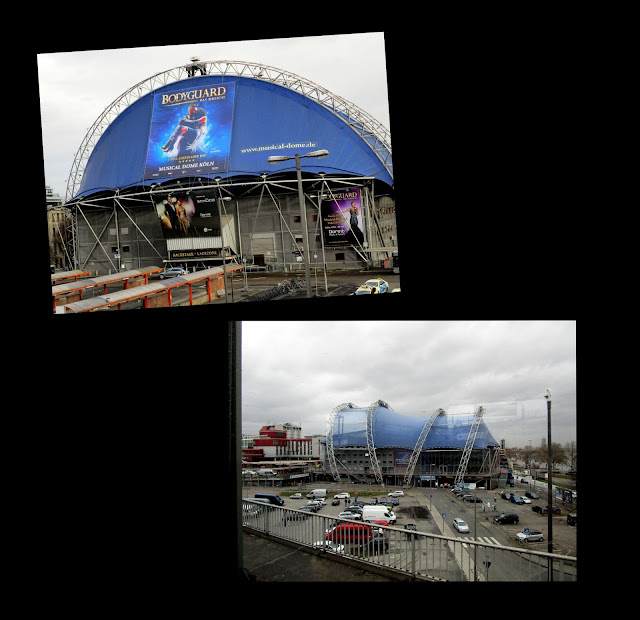 In front of the station I saw this huge "tent" looking like building. It was the Musical Dome which is a unique theater because of its extraordinary glass and concrete construction and at the same time an architectural landmark directly on the Rhine River promenade. 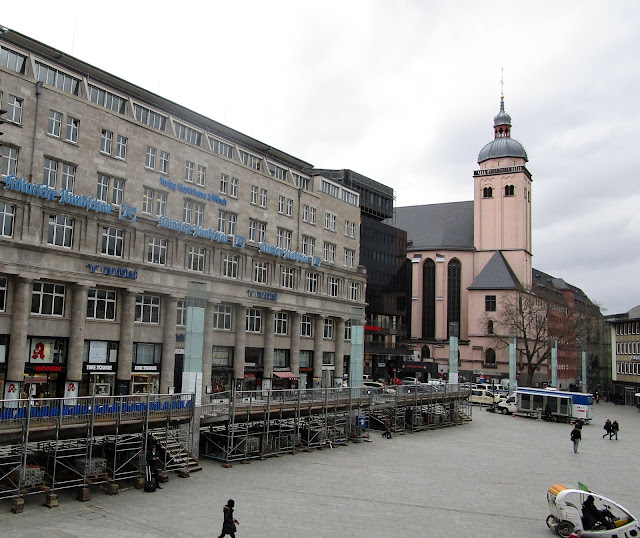 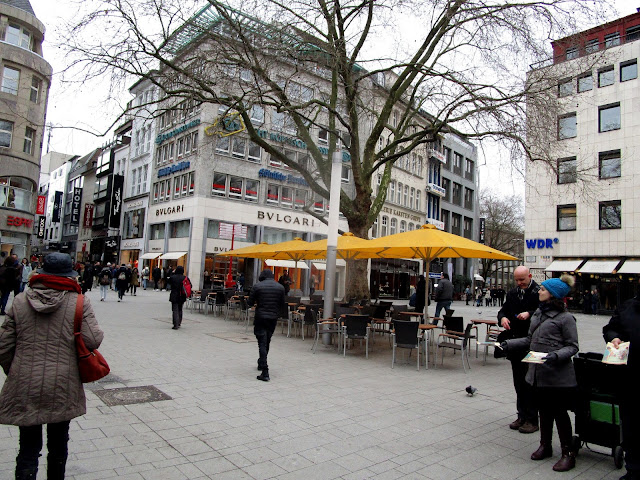 The market  place and the shopping streets hadn't changed 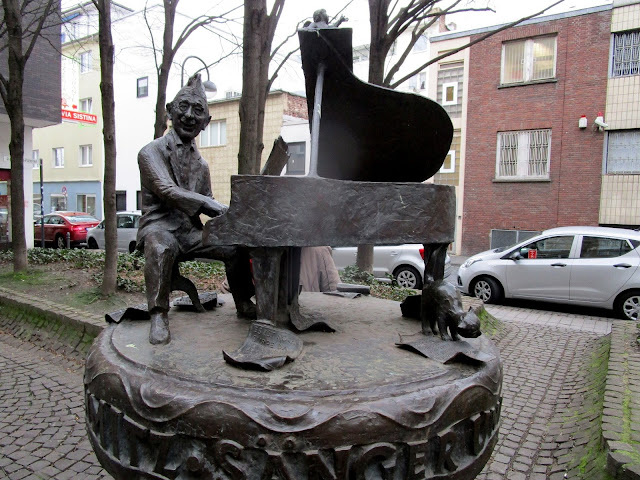 I noticed a new statue of a singer who only sang about Cologne with very funny texts. He also had composed the most famous carnival songs. 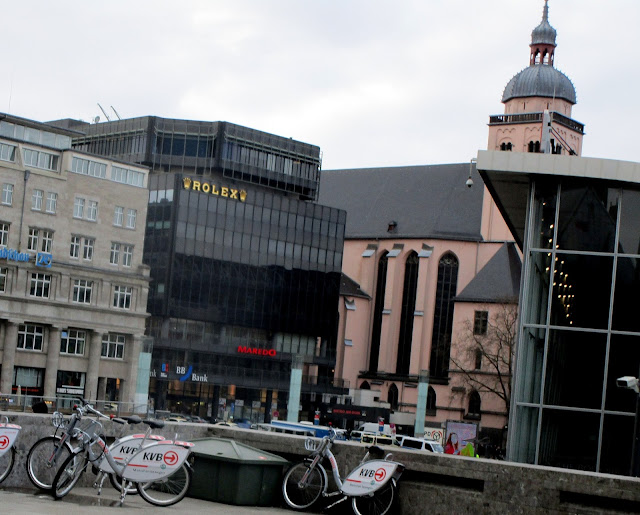 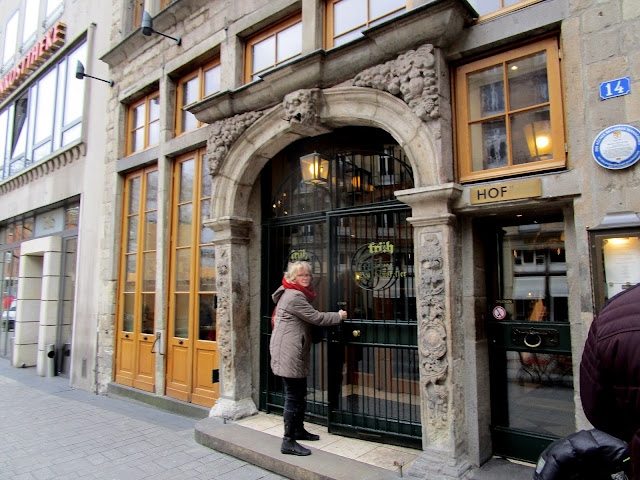 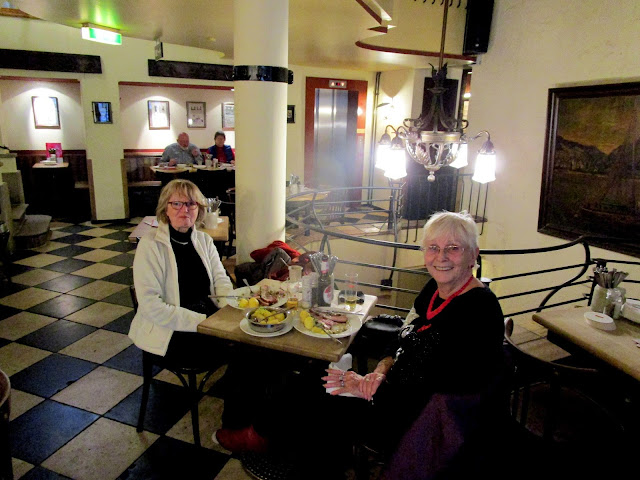 We then had lunch in an old Brewery near the Dome. 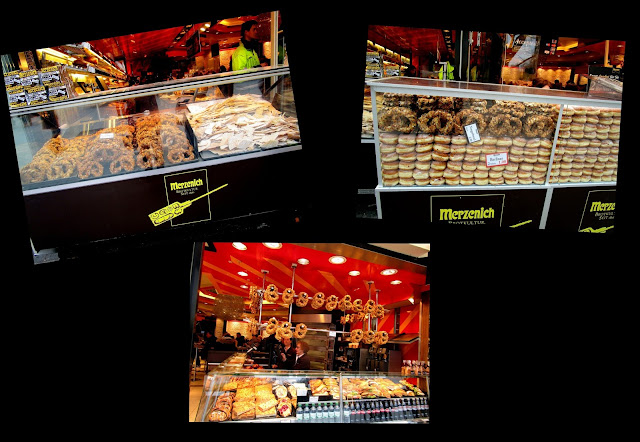 One thing I have to say, I have never seen so many sorts of cake, cookies, or bread like in Germany 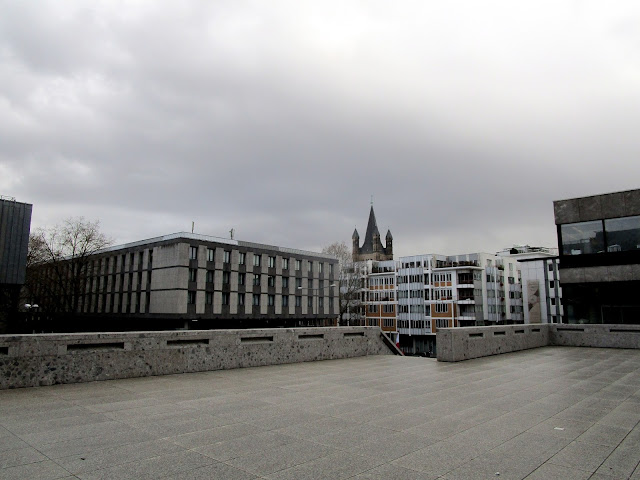 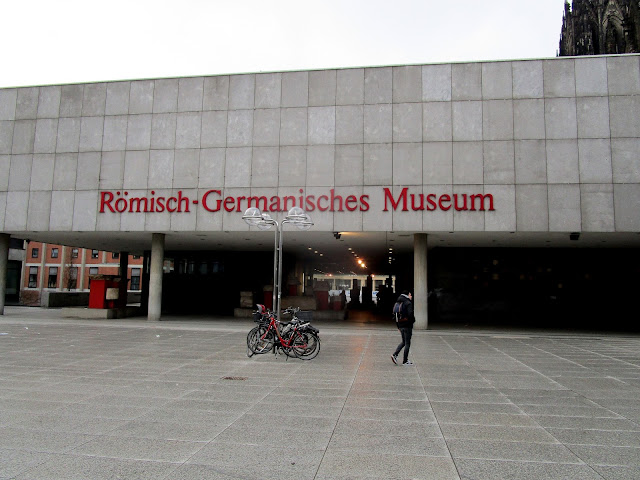 Unfortunately we couldn't do more, it simply was too stormy and cold.

Finally this weekend spring pointed the tip of its nose it was warmer and the sun tried to make holes in the clouds.

A good opportunity to go through the car wash to make my car white again and get rid of the salt they had put on the streets.

With my "new" looking car I drove to a place where new condominiums had been built, again a piece of land gone. A friend of mine had bought a flat there. I found this place terrible, there was nothing not even a tree, just 2 buildings with a view on fields and behind the train. I thought it was not very well thought of her, she is 76 and her health is not the best. There are no shops no public transport, I could have understood if she was 40 ! It was not a question of money, she could have bought something nice and close to shops etc. I haven't seen the flat inside because she wasn't there. 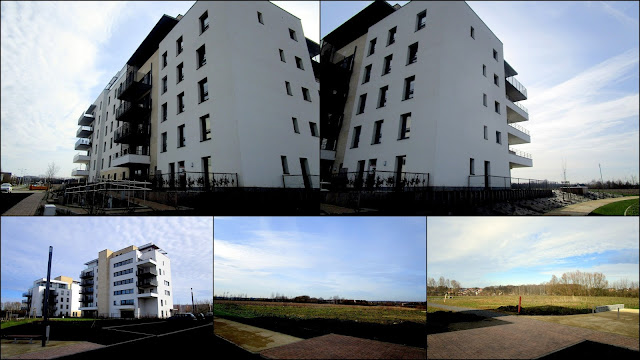 At that age one should think where to spend the rest of their lives in a nice and practical place where you eventually don't need a car ! 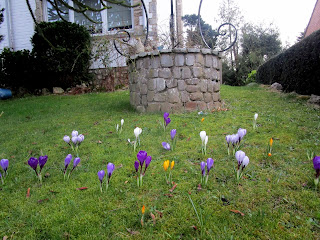 In my neighbor's front yard I saw the first blooming flowers of this year !!

Sunday I went to the retirement home where we have our painting classes. This time the city had organized a "give away", as it does twice a year. People who have too much book a stand and display their things, and those who need things are coming to choose what they need. It's totally free of course. 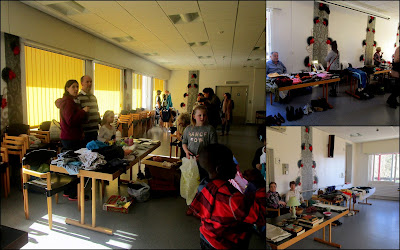 Despite the wonderful warm spring weather there were many people and the clothes, baby stuff, books etc went away quite quickly. I was only there to keep company to my friend Mirella who is also my painting teacher. It was very nice we met a lot of people we knew.

Rest of the afternoon I spent with Nicole, her daughter and granddaughter sunbathing on her patio.
We all really needed the sunshine and the light.
Posted by Gattina at 08:35 5 comments: