WHERE IS THE AIRPORT ?

Usually it should be very easy to go to the small airport Charleroi Brussels South where only Charter flights are landing and where I had to pick up Mr. G. coming back from his holidays with his sister In Italy. But not for me !

My getting old Madame Garmin GPS got suddenly lost when the highway was closed for works and recalculated in all directions. As I had no other choice and am unable to read a map I followed her instructions and got the impression to turn around in cercles with all her recalculating, because in my excitement and anger, I mixed up left with right, as always do when I don't pay attention.


Finally I arrived at an airport looking like place, where I had taken my flight to Marseille a month ago. As the entrance was closed with a barrier and only a few cars standing on the parking, I found this very strange but in my excitement I thought that it probably was the back of the airport building ! Fortunately there was a bell ! I rang and a friendly male voice answered "Yes ?" I told him that I wanted to pick up my husband but couldn't get in because of the closed barrier and that I am already late. 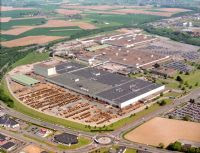 He laughed and said that I wasn't at the airport at all but at the entrance of the big Caterpillar company and that I should make a U-turn, go to the first roundabout and then to the second and then I would see the airport. I had no time to feel stupid, turned around and listened to Madame GPS' "recalculating" voice.

Of course she didn't know anything about roundabouts and therefore couldn't give me other instructions as "recalculating" ! I got more and more angry and almost threw her out of the window ! Finally I saw the sign to the airport and although she insisted to direct me elsewhere I followed the sign and found a freezing Mr. G. waiting there (his plane was in advance) he came from 25°C (77 F) and it was just 11° (52 F) here.

and the real one !

Of course I could update her, but it is so expensive compared to buying a new one, that it is probably wiser to think about a new one as a birthday gift ! 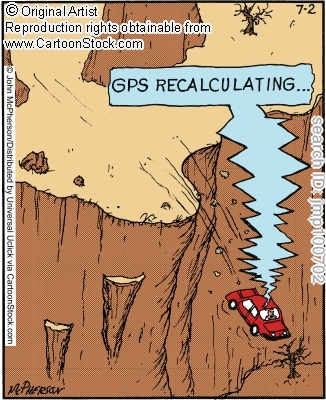 1. After our acqua gym I went with Dominique to a restaurant or rather a Pub, called "La Pomme" (The Apple) where I hadn't been since at least 5 year or more.

The decoration was still the same, but the food had very much improved and we really enjoyed our warm salads. I had a "Salade Paysanne" and Dominique goat cheese salad with honey. The portions were unusually big for Belgium, I think the restaurant had to adapt its portions to the fact that they have a lot of English and American employees who are working just in front in the Industrial zone, and I know that in these countries the food served is a lot more than in Belgium or France.

2. On my way back from shopping I stopped at Chantal's for a cup of tea

and while we chatted her two dogs were listening and apparently we had such nice subjects to discuss if you look at the dogs. Her youngest son was there too, after having studied Chinese, he now switched over to Japonese ! Not because of a girlfriend, she is French !

4. With this early warm weather our garden changed into a jungle and I had to call the gardener to cut all these bushes and hedges ! In the past Mr. G. did it, but as we are not getting younger, he can't do it anymore and I am only a weak woman.

He cut and cut and then had to put all the twigs and leaves in his little truck, poor man worked from 10 am til 4.30 pm !

5. Now that the entrance and the backyard looked clean of course I had to buy some flowers and put them in the pots

which I did and now it all looks clean and nice. I was quiet proud of the result and astonished that I wasn't too tired after all this physical work ! Of course I was supervised by my cats !
Posted by Gattina at 06:00 17 comments:

In the European countries it is the use to hold the fork in the left and the knife in the right hand during the whole meal. Once a bite-sized piece of food has been cut, you eat it. You are not allowed to "carve up" multiple pieces and then munch them. You also have to empty your plate first before you can take another portion.

You eat using both hands, the arms should be held against your body and it is very impolite to lay your ellbows on the table hang your head over (or almost in) the plate and gobble down the food. You should eat and not munch and smack when chewing your food or slurp while eating your soup and do not point to somebody or something with your spoon or fork while talking with a full mouth.

Eating manners are very important because they show if you have had a good education or not and "where you come from" as posh people would say.

Of course you have to use your napkin to keep your mouth clean and not to blow your nose.

In the USA it's completely different, the fork is shifted between the left and right hands and used much like a spoon (tines up), The meat cut into bite sized pieces and the knife is then set down, the fork transferred from the left hand to the right. "The American style is almost completely unknown and considered improper in other countries" (sorry for my American friends, I copied this from Wikipedia). But by own experience I also was very surprised to see how people ate at home or in restaurants, when travelling through the States or living with my aunt in Madison. Of course after a while you get used to and then you do what you want ! At least I did.

But to my knowledge in both ways of eating burping, coughing, yawning, sneezing, or fart at table is not well seen.

The eating way in Asia, and Africa is again completely different, so if you want to know Mr. Google will help you.

Learning to eat properly is a difficult task

herewith demonstrated by my 6 months old Grandson Toby, with his first carrot meal !
Posted by Gattina at 06:00 21 comments:

Scarecrows on Brussels' Grand Place
Posted by Gattina at 06:00 8 comments:

MY WORLD - Scarecrow Expo in Brussels

WHAT DID YOU DO LAST WEEKEND

Helps you to remember what you have done on the weekend of May 14. You never know if you need an alibi ! If you participate please put the little logo on the top of your post and leave your link.

Before Mr. G came back from Italy I was invited by my neighbor and friend Dominique for supper because her eldest son with his little family was there and Lucie the baby girl was born 3 days before my grandson Toby. As I haven't seen Toby since February, I just could see how he probably will be now, only a little taller. Her son had brought Chinese food and we had a real nice supper together. Two year old Charly bravely tasted Chinese sweet/sour chicken for the first time and declared that it was good. While we were eating, little Lucie rolled on the floor and was in a happy mood although she had spent the whole day in daycare. We joked and said that Toby has already a girlfriend in Waterloo.

A cute and cool little family

The next day I picked up Mr. G. at the Brussels' South Airport. It's a small airport only for charter flights. He was very happy to be home with his wife and cats again, and was very tired.

He is not used anymore to the noisy Italian way of life, where everybody shouts at the same time and nobody listens to the other. He said he would never be hungry again, because they fed him so much, twice a day a hot meal and of course everybody wanted to show their cooking talents. Besides eating he didn't do very much. He also missed his computer. There were not a lot of news to tell except that everybody had become older and quieter and he had started to get troubles with closing his jeans. He wasn't even at the Lake of Garda.

Sunday it was cool and rainy, Mr. G. was still tired and slept the whole afternoon and went to bed very early. I spent the afternoon with Ilona, we had a lot of things to discuss. We wanted to do a walk through the woods, but it was so cool and windy that we prefered to stay inside.
Posted by Gattina at 06:00 6 comments:

TAKE IT WITH HUMOR

I usually don't care about politics because I should have done this 30 or 40 years ago, now I am retired, although lots of politicians and even the pope are far over the retirement age and still continue to rule the world instead to retire too and leave the place to younger people with new ideas. A retirement home would be a far better place for them.

But for once I want to announce that Belgium just made a record and should enter in the Guiness book of Records ! It's the first and only country which is without government since ONE year now !

We, the normal citizen live our lives and notice no difference, even we think it's far better without government as with government, at least the language problem is not a problem anymore. Some people from other countries are wondering why the Belgians don't go on the streets and make demonstrations for a new government, but as it is, nobody sees the necessity.

The annual budget had been closed without any language problem and far quicker as usual and the provisory Prime Minister Yves Leterme becomes better and better. Even the French speaking people agree although he is Flemish.

Our two candidates who can't come to an agreement is the fat Bart De Wever (the Flemish), who gains more and more weight and less and less votes and the other one is Elio di Rupo (Walloon) the skinny one always wearing a bow tie. The Flemish one has 4 or 5 children and has married the mother when they were already born, the other one is gaily gay, which is not a critic, because he is very sympathic and stands to what he is. Belgium is a very tolerant country, the private lives or religions of politicians, their wives and children are of no interest to anybody. I don't even know how they look like or if they believe in something or not.

One thing is for sure, once in a blue moon we probably will have a government, but everybody is now so bored to hear always the same discussions and no results, that when it comes to politics on TV, people change the channel.

Don't ask how politics work in Belgium, nobody could explain. We have 53 minister for a country of 11.000.000 inhabitants, one prime minister and a King ! 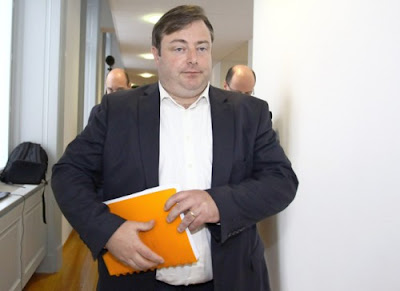 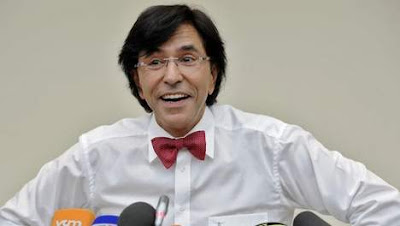 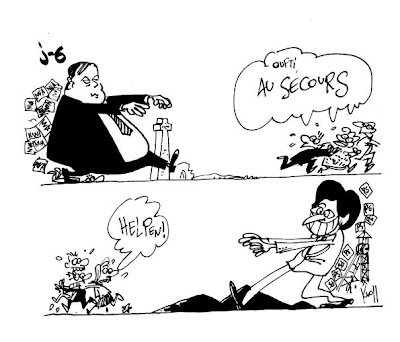 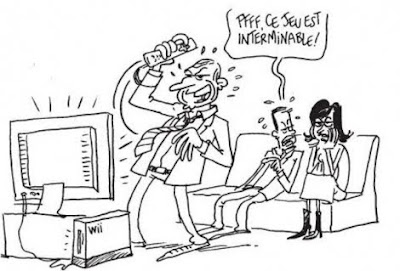