I always thought that a nut is a nut, a dry fruit to eat and eventually break a tooth. Quite a lot of people are very allergic to nuts like my grandson.

Some people also drive me nuts, which has nothing to do with a nut you eat. I wonder why a poor nut drives people crazy. Couldn't find out why, but found another interesting "nut" but not the plural "nuts".

I always thought that since I am blogging I become more and more intelligent.  Looking up for nut, I discovered that one of the oldest goddesses in Egyptian mythology is Nut, the goddess of the sky !  It was believed that the sky is, in fact, a star-covered nude woman arched over the earth in a plank or perhaps down-dog position. Some of her titles include Mistress of All, She Who Holds a Thousand Souls, and She Who Protects ! At least the Egyptians had also women as gods and not only man like in the religions today. 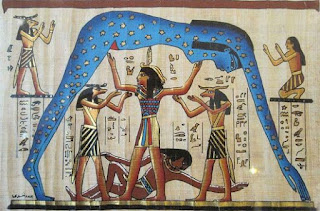 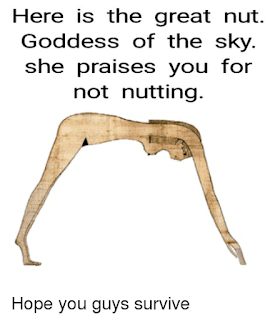 According to the Egyptian creation myth, Atum (the creator) created himself out of the chaotic primordial waters of Nun. By creating himself, Atum created being.

Atum also made the god of air, and Shu, and the goddess of moisture, Tefnut. These two united to create the earth, Geb, and the sky, Nut. 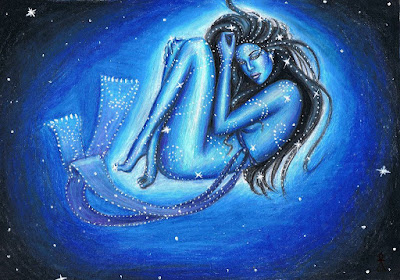 Both Geb and Nut are traditionally depicted without clothes on and it was believed that they were having intercourse continually with Nut lying on top of Geb. This is written in the books and not an invention of me. Eventually, they had to be separated by air but before that Nut gave birth to four gods: Osiris ( the lord of the underworld), Isis (goddess of nature and magic), Set (god of warfare and destruction), and Nephthys (goddess of water and funeral rites). Some legends tell of a fifth god, Arueris, who is generally seen as an Egyptian counterpart to the Greek Apollo.

I hope you all keep in mind these names. Finally our bible is a bit easier.

The birth of Nut’s children did not transpire without a hitch for their coming into existence greatly angered Ra, the sun god.

Some accounts say that Ra is Nut’s grandfather. Others say that “Nut gives birth to the sun-god daily and he passes over her body until he reaches her mouth at sunset. He then passed into her mouth and through her body and is reborn the next morning. Another myth described the sun as sailing up her legs and back in the Atet (Matet) boat until noon when he entered the Sektet boat and continued his travels until sunset”. In any event, Ra the sun god, did not want four new gods to come into the world and compete with him for Nut’s attention. Thus, Ra declared, “Nut shall not give birth any day of the year.” At this point in time in the early history of the world, the year was 360 days long.

It seems to me that in the first part of the old bible, they also all tried by all means to fill the world with humans when you think that we all stem from one couple Adam and Eve.

Nun, god of the waters of chaos, lifts the barque of the sun god Ra into the sky at the beginning of time.

Frustrated, Nut spoke to the god of wisdom, Thoth, in order to devise a plan so that she could give birth to her children. Thoth agreed to help the goddess of the sky. He called to Khonsu, the god of the moon, and challenged him to a game of chance. Khonsu could not resist the challenge, even when Thoth warned him that if he lost, Thoth would get to take part of Khonsu’s moonlight. In those days, the light of the moon rivaled even the light of Ra, the sun. Yet after several games of chance, Khonsu lost so much of his moonlight to Thoth that he became the dimmer orb in the sky. Meanwhile, Thoth used the moonlight to create four (or possibly five) extra days so that Nut could have her children. When Ra found out the trick Nut had pulled, he was so angry that he separated her from her husband-lover Geb for all eternity by ordering their father, Shu god of the air, to stand forever between the two. 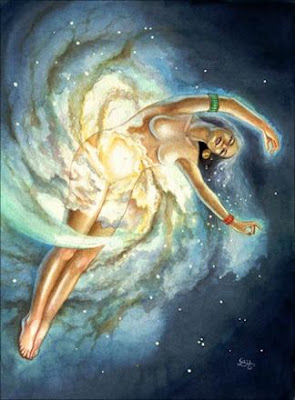 Due to her supposed role in the regeneration of the sun each day, Nut came to be considered a protector of souls as they entered the afterlife. She was a friend to the dead, a mother-like guardian, who would help the souls leave the underworld and join her in the stars. For this reason, the inside lids of many sarcophagi are painted with images of Nut. A prayer often written on ancient tombs reads “O my Mother Nut, stretch Yourself over me, that I may be placed among the imperishable stars which are in You, and that I may not die.”

In a certain way a kind of Saint Mary.

Although this story sounds so pittoresque to us there are many very similar things written in our bible or even in the coran, because at the very beginning this book was the same for all religions.

I hope I didn't drive you nuts with the explanation of the Egyptian version of the world's creation of the population.

Another week went by it seems to me that when I wake up on Monday morning, it's right away Friday afternoon  ! But of  course things are happening.

Like last week I was the forth one in Scrabble or if you prefer the second from the last one ! As one of us had her husband in the way, she brought the cake over to me, mine was away playing Whist.

It's always nice to play together, as we are all different. I don't care if I loose or not I play for fun, but there are 3 of us who are real players and get angry when they don't find the right word, or if somebody (apparently me) is talking while she can't concentrate.

Mr. G. and I had finally found a restaurant, in fact Mr. G. found it and it is even Italian. They do a Brunch on Saturdays and Sundays and not only on Sundays. 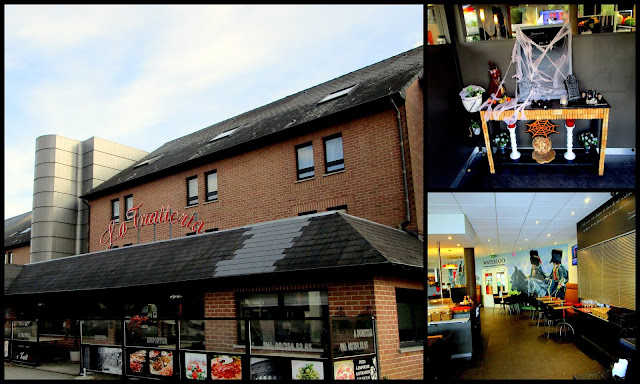 There was even a Halloween decoration at the entrance !

Our golden Wedding will be celebrated on November 16 in the City Hall where the Maire receives all Waterloo couples who are married 50 years. When the celebration is over we wanted to take family and friends for a brunch. So we were very happy to have found one. I just have to bring some decoration the day before.

Nicole who often suffers from back ache had got a device with electrodes (I think so) to try out. The patches are put where it hurts. Another friend in the same case came to try it out too, I just watched because fortunately I don't suffer from back aches. They both were very satisfied and said it helps and that they felt much better. Now both want to buy this machine, which looks like a balance with wires and patches. We had a laughing session for free ! 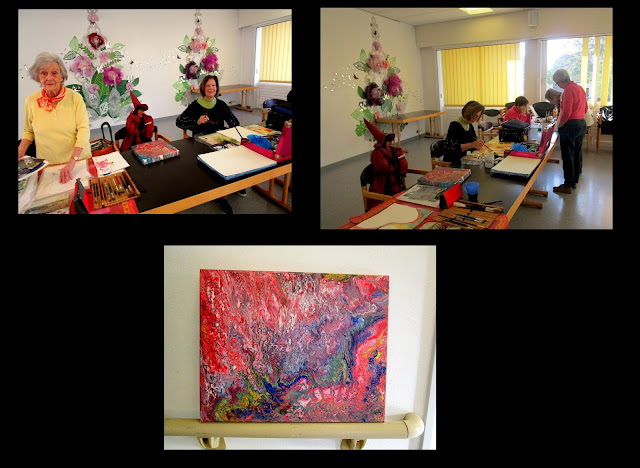 My finished painting from last week which was pink and now fortunately red, and our witch

Although there are one week school holidays in Belgium which is called "All Saint's" holidays, we had decided to continue painting "school" and have our usual classes ! Yes, in this case we are doing overtime. One had brought along a Halloween witch, which we considered as a new student ! We had a lot fun with our pouring and the results ! Sometimes more then surprising and never as you wanted it to be ! 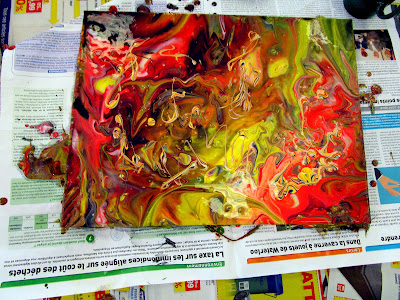 The one I did this week,  now I am curious how it will be once dry !

After class, six of us went together to a nice Greek restaurant and enjoyed a roasted rapid in mustard sauce with of course Belgian fries ! 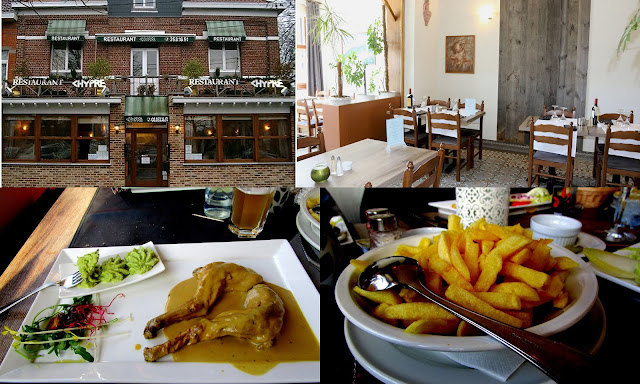 In my corner of Belgium Halloween is not very much celebrated and if only for children. I haven't seen any decoration in shops or malls, but maybe there is some but not much. I have heard that sweets will be given to the children in our very chic and expensive Gallery where all boutiques are located. That's all what Waterloo does for Halloween, but privately 2 days ago in one part somebody had organized a Halloween parade for kids.

Of course there will be Halloween parties in different places but on the street you see nothing not even a pumpkin.

Some years ago there was a big Halloween fest in the city park and everybody liked it there were always a lot of people, but this doesn't exist anymore, apparently the city has not enough money, which is more then strange, because we pay a lot of city taxes compared to others ! Probably our politicians had a salary increase.

No kids ring at the door anymore, so I didn't buy any sweets, last year I had to give them away because we don't eat them and nobody showed up !

But to put you into the Halloween spirit, I found some nice pictures on Internet, how Americans celebrate Halloween. Even more then in Ireland the country from where stems Halloween. It had been brought to America by Irish immigrants and then "made great again" as Trump would say. 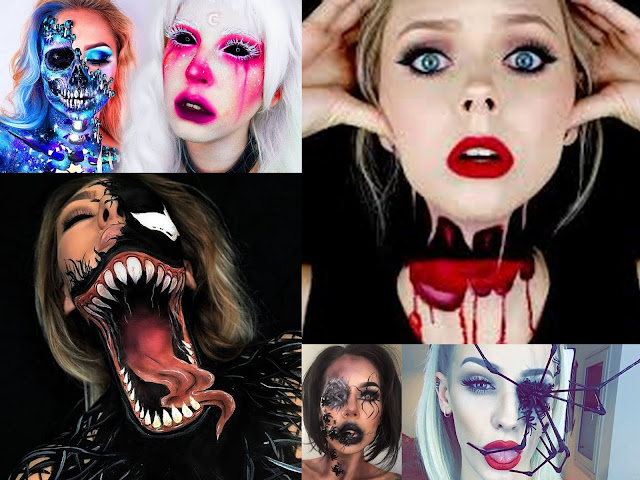 and for the Halloween party some starters 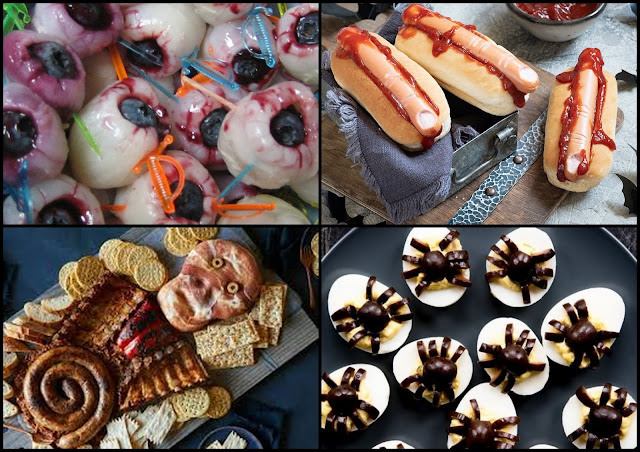 This is now the main course 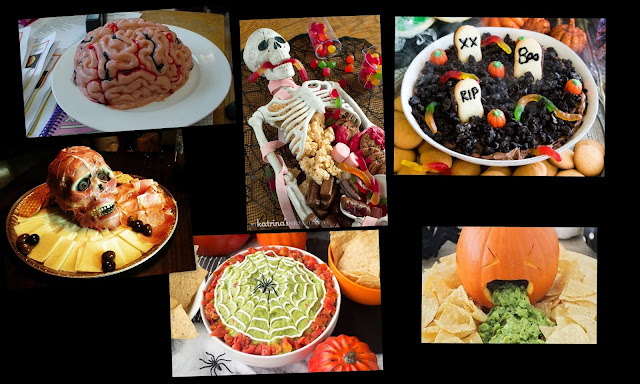 Before of course you have to decorate your house 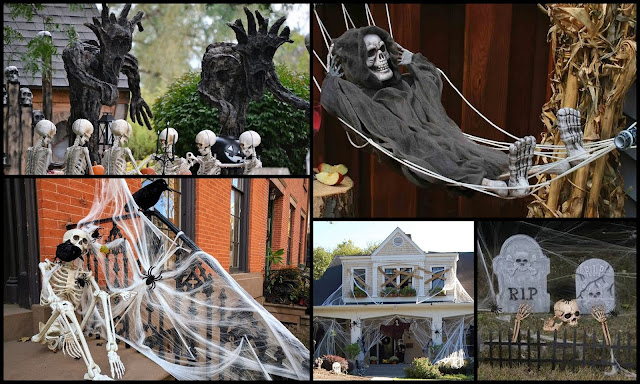 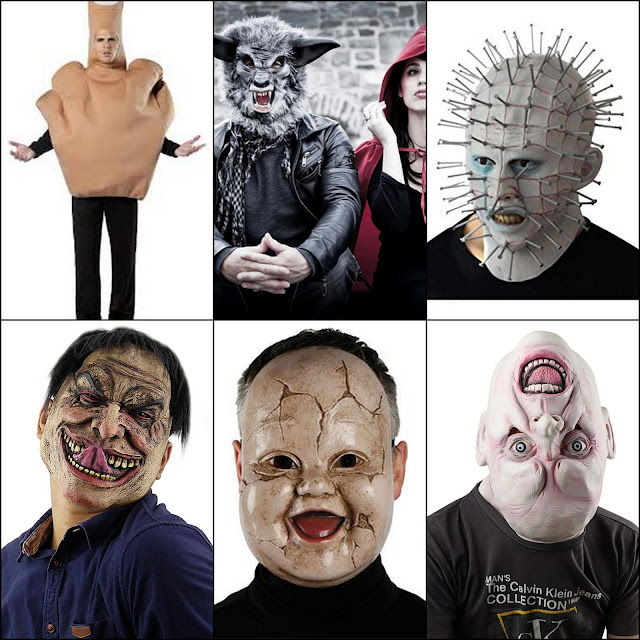 and the drinks of course 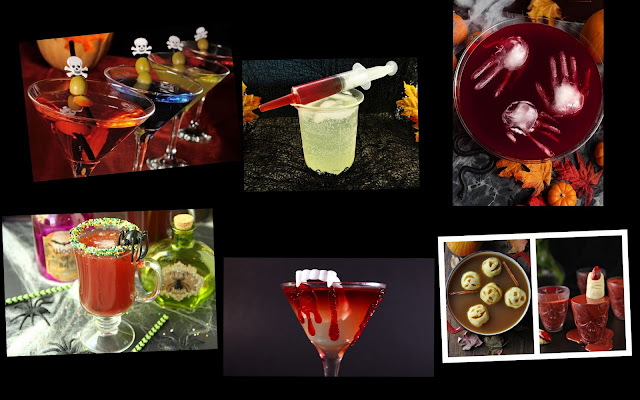 Linking to One liner Wednesday 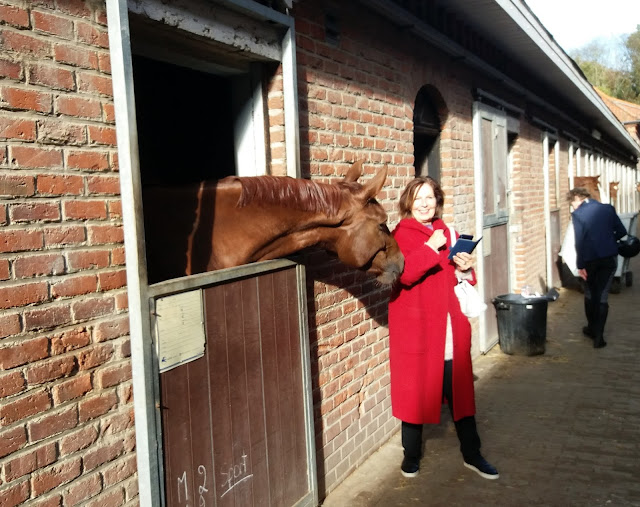 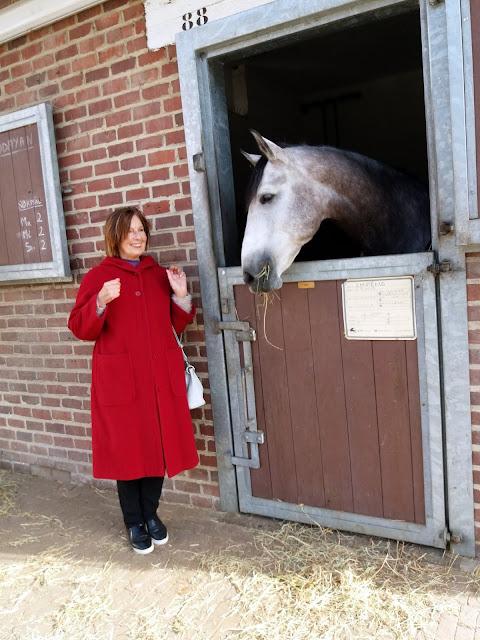 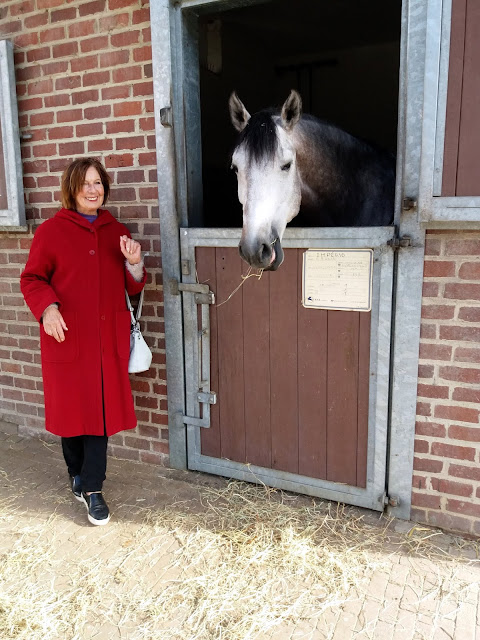 Have  you taken the photos, I am sooo afraid of horses !

Vienna was our last city to visit before we returned to Munich where our tour ended.
Of course in half a day you only get a glimpse of Vienna and you have to decide if you want to come back or not. 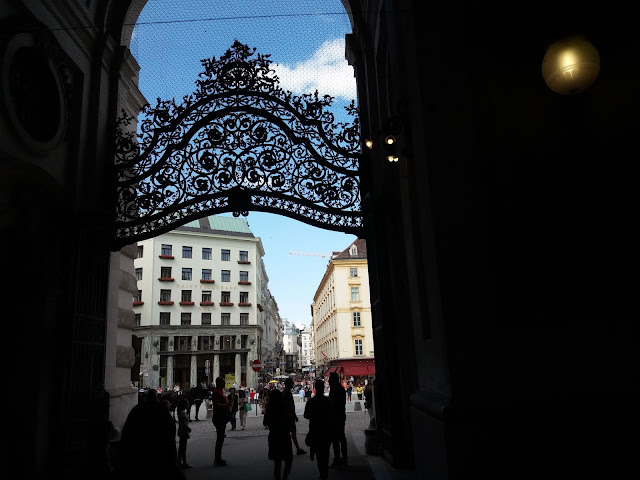 Entrance to the Ringstrasse encircling the Innere Stadt (inner city).