I got these amazing pictures in my email and found it worthwhile to share ! 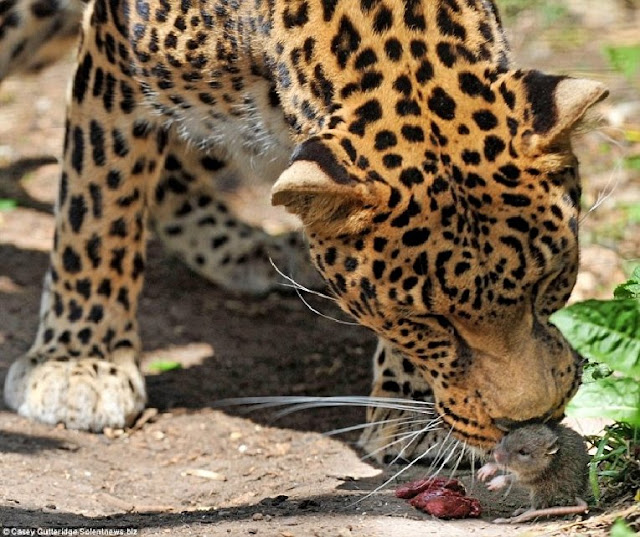 A huge tiger and a little mouse ... 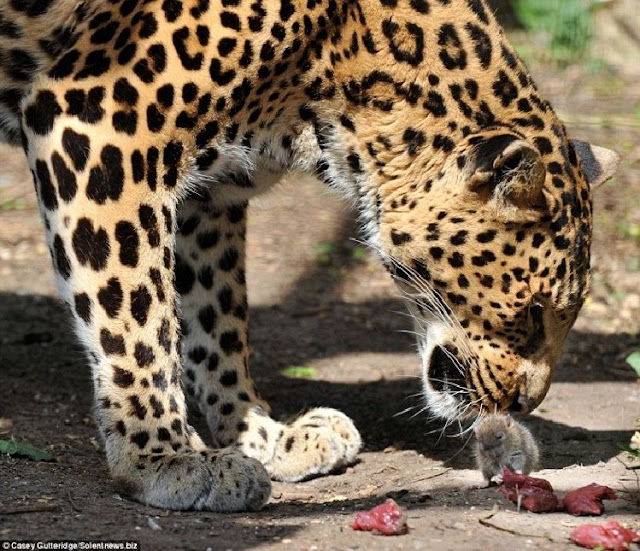 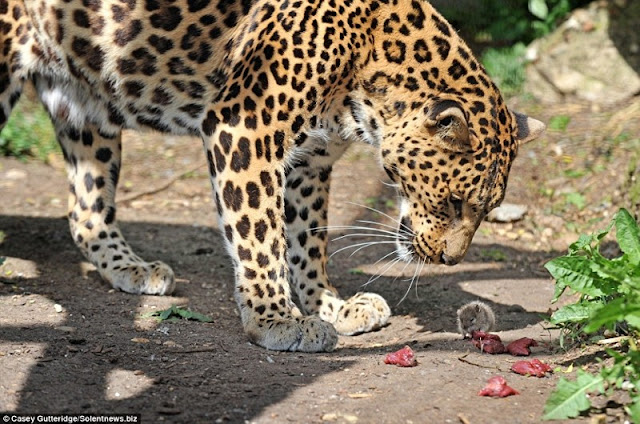 If they can be friends, why isn't it possible amongst people of the whole world ?


1. After acqua gym and our "tea party" I went shopping for cat food. Arthur must have a hole in his stomac !  As it was nice and warm I finally finished my planting in pots, and realized that I didn't have enough earth and also 5 plants were missing ! We didn't eat outside, but other neighbors started their first barbecue.

2. The next day it was cold the temperature had dropped about 10°C ! and then came this 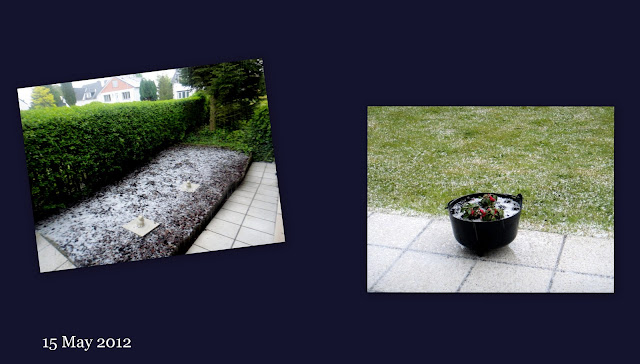 between heavy showers, dark skies, and sunshine, suddenly we got hail, big like peas ! It looked as if it had snowed. My poor freshly planted flowers ! No way to continue my garden job !

3. Next day it still rained so I took the opportunity to create a special birthday photo for our Indian friend, whom I know since 1967 when we worked together in an American company. When he married a French girl, we also became friends, were pregnant at the same time so our sons have the same age and our friendship lasted all over these years 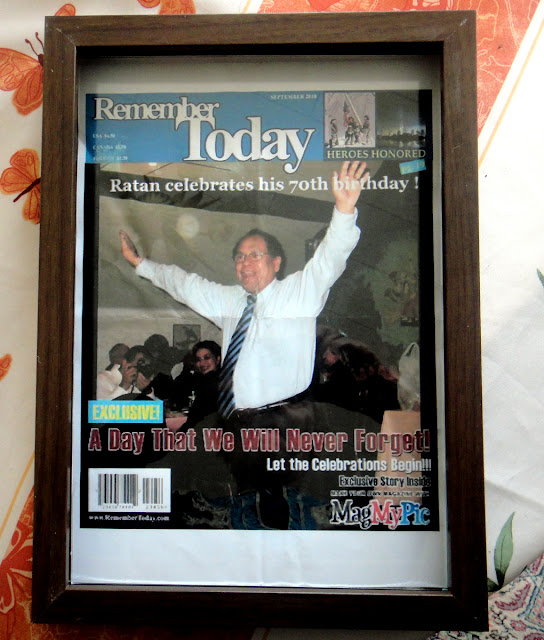 This is the result, then I bought a nice frame and tried it out. I am quiet happy with the result, now I have to print it on photo paper and put it in the frame. It's always difficult to find a nice gift for people who have everything !

4. My son called me to tell me that he wants to come with little Toby over the weekend. Of course we were both happy to have them here. 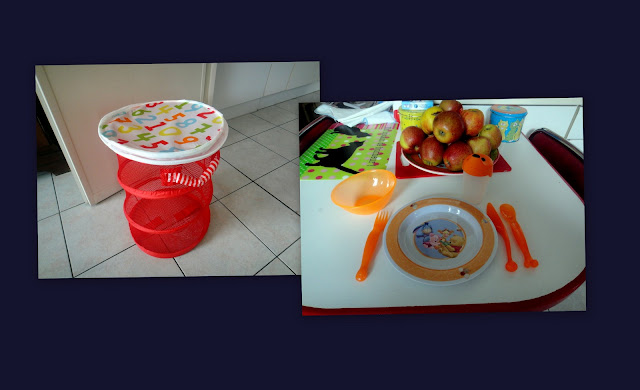 My grandma "equipment" missed some important things, so I went to Ikea where I bought this foldable net box for the toys and a little diner service for toddlers.

5. I also imagined that I was 18 month old and had just learned to run around and discover the world. First thing I would try is to check out the cat figurines of all sizes and materials which are sitting a little everywhere, and of course try to pet the real cats.  As a naughty grandma, I removed all cats which are in reach of a curious little boy. Then I removed little tables and the remote controls, and of course I also invented something to protect my 4 cats from a nervous breakdown, in case a cheerful laughing and screaming mini human runs behind them and eventually even catch their precious tails. So tomorrow before they arrive we will put something in between the door frame which allows the cats to get out of the "sleeping quarters" but won't allow Toby do get in. Life is made of compromises.


Today the word "zen" has become quiet commun. If you are very much excited, nervous, or agitated people tell you to be more "zen" instead of "calm down", "take it easy" etc. Of course even the new word "be zen" doesn't help and makes you even more agitated.

When I looked up to know the origin of this new word in our vocabulary,  (it moved in in all languages), there is so much to read that it would take me a few a days or even weeks, so for those who want to know more when and why "Zen" came to the Western world you can find all about it here.

Although it is difficult to trace back when the West first became aware of Zen, apparently a Japanese Zen monk, started with it in Chicago during the World Parliament of Religions in 1893. But it was only during the late 1950s and the early 1960s that the number of Westerners got a serious interest in Zen which then began to reach a significant level. Especially Japanese Zen has gained popularity in the West.

One way to think of zen is this: "a total state of focus that incorporates a total togetherness of body and mind". I am not sure that I reached this, but at least my head sits on my body. That's already something. Where my mind is depends.

Apparently Zen "involves dropping illusion and seeing things without distortion created by your own thoughts". An example was given :

"Sun is warm, grass is green." So I must be zen, because that I knew. Only sometimes the sun is not warm, then it becomes complicated.

After having studied enough about being Zen, I now feel better and far more wiser !

All of you follow my advice : Be zen, even if your house burns down in front of your eyes ! Then you have reached the perfect "yourself". 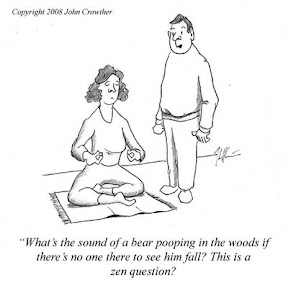 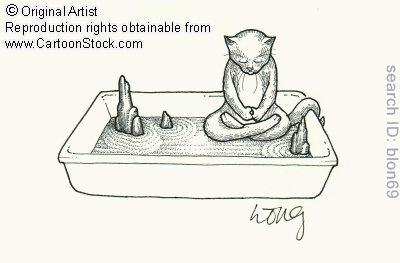 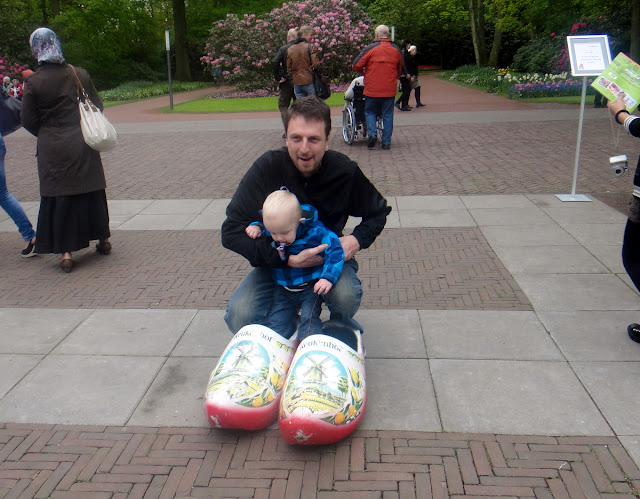 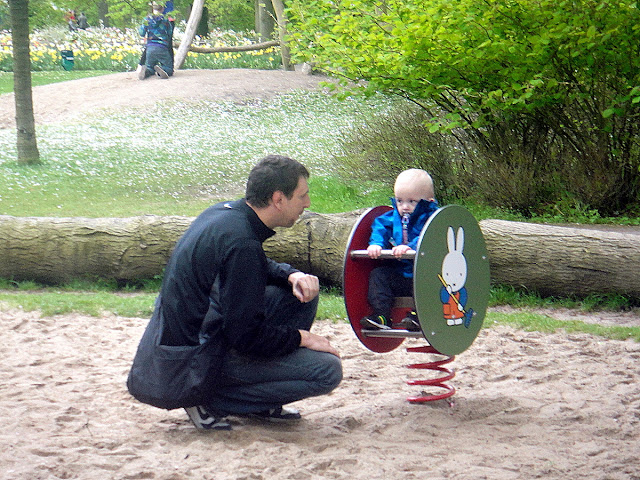 OUR WORLD - THE KEUKENHOF - Netherlands


When I went to Amsterdam last week, my son took me to the Keukenhof  which means "Kitchen garden", and which is also known as the "Garden of Europe". It is the world's largest flower garden situated near Lisse, Netherlands.

On Saturday morning we had a little business meeting in a very beautiful hotel near Brussels airport. 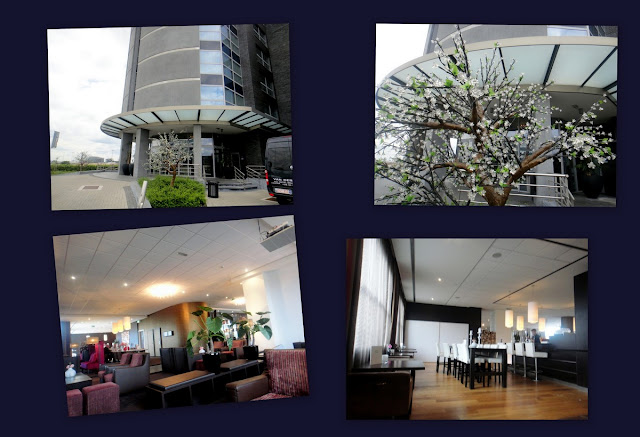 In front of the entrance stood this tree, which almost looked real but was in fact made out of glass. I suppose it's lightened in the evening.

The afternoon I continued with my new garden look. This year it's quiet some work because I had to start from the scratch. Next year it will be better because I now have all the pots and the earth in the pots so I only have to plant the flowers. 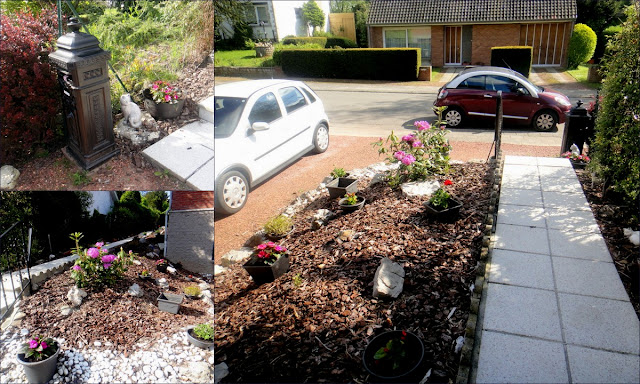 I worked at least for 2 h and then I ran out of earth and plants and couldn't continue. I wasn't sad at all I really had enough. Gardening is not one of my hobbies !

The rest of the day I spent with sorting out the pictures I had taken in Amsterdam, especially those with little Toby 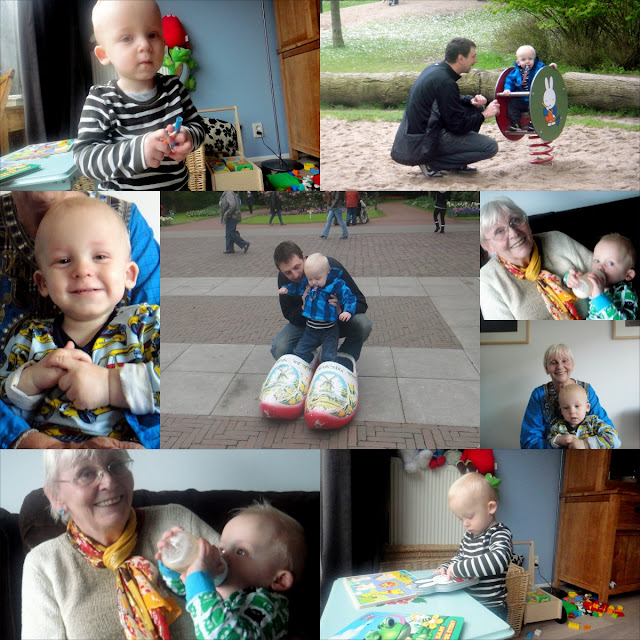 On Sunday morning I went with Dominique to the market in the next little town, because she also needed plants and herbes. There was also a big stand with baby and children clothes, and of course we two grandmas couldn't resist. She bought for her little 3 year old grandson and for her granddaughter who has the same age as Toby, 18 months. 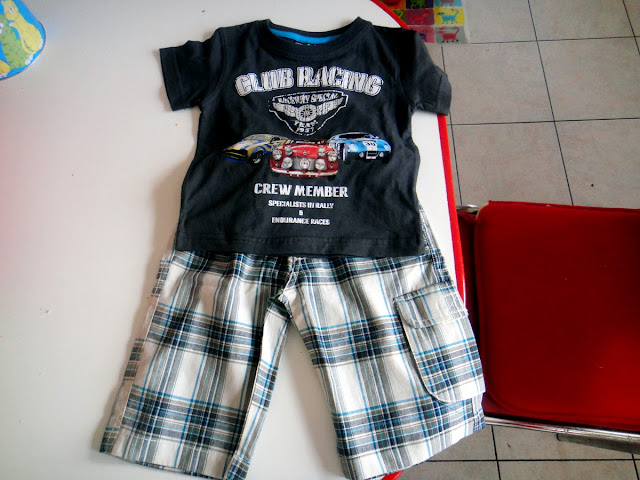 I found this real cute and hope it suits him well. Sizewise I think I bought big enough.

In the afternoon we booked our trip to London on June 11 and Hotel/musical package for "Ghost". 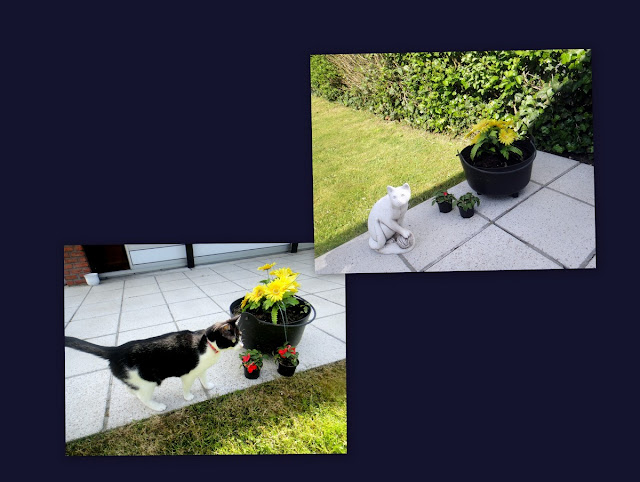 Now I still have  3 pots to fill in with real flowers, these once are artificial which I had put in in autumn, then forgot, so the whole winter we had flowers !

As usual we watched a Midsomer Murder, this time with the new Barnaby. Dominique had brought a box of this year's first strawberries, which were delicious, and while Inspector Barnaby discovered 4 corpses during the movie, we ate our strawberries and chocolate cookies.
Posted by Gattina at 06:00 6 comments:

Labels: babysitting, What did you do this Weekend ? Gardening

AMSTERDAM STATION AND KINGS OF THE ROAD


One of my best friends is polio handicapped and can't walk without crutches,  That's why I started to look in public places if they are also equipped for people with mobility problems. Unfortunately I realize that lots of public places are not adapted at all for such kind of  problems. I always complained about the main station in Brussels, but compared to the Amsterdam station, Brussels is a "paradise" for handicapped people ! 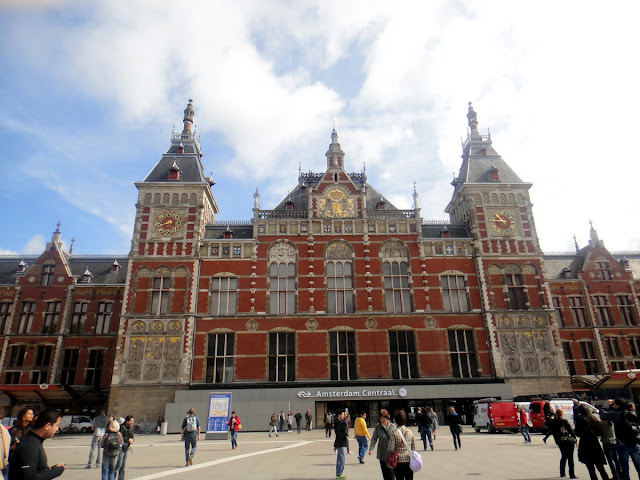 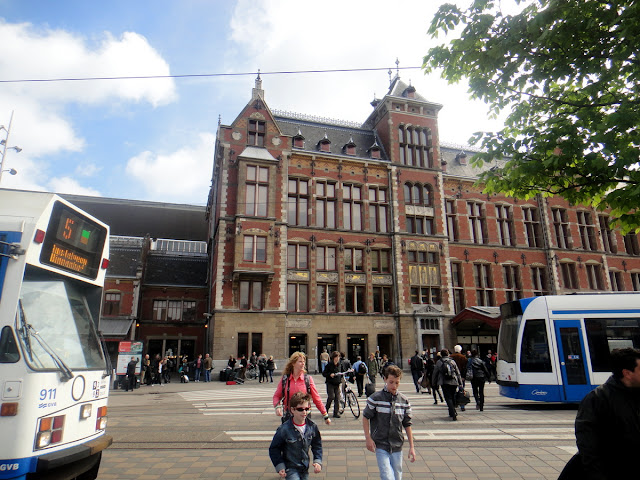 The building itself is beautiful and tourists bombards it with their cameras. But that is only from outside. Inside I couldn't find an escalator, had to carry up my little suitcase a lot of  steps to get to the platform, There were no seats there or only two benches of course occupied by young people or men. Pregnant women or elderly people stood there and waited for the train.

I saw a man in a wheelchair and wondered who had carried him up the stairs when I noticed a hidden lift, not very well indicated at all. In the station there was no official employee who could give you informations where the platforms were and even where you could buy your tickets. Fortunately I had ordered mine via internet and printed out.  After miles of walking around in the huge station hall, without finding somebody, I finally found an information desk ! There, a woman told me that my platform was n° 15b, which I knew from the information signboard, so I asked her where this platform was and she pointed behind her and said, it's there at the exit ! I asked if it was on the left or right side, because it was "b" and she looked at me as if I were handicapped, but mentally.

Finally I found the very well hidden platform, carried up my bag, stand there and waited that I took roots when finally the train arrived. And then nobody told you "mind the gap" as in the UK, and there was a big gap between the platform and the train steps. Big enough to fall in together with your suitcase. Fortunately I had no problems but some elderly people did and the man with the wheelchair were helped by two young men. Again nobody from the Station service was around.

Finally I found this compartment with red plush seats, which looked a little old fashioned but rather cosy and when the ticket controller came by, he told us that this train was almost 40 years old and we were sitting in the first class which now had become the second class. We all laughed ! It reminded me a little of the movie "The orient Express". At least the platform in Brussels was higher and there also were escalators and lifts for the handicapped or elderly people. I was a little surprised that with all the tourists who come to Amsterdam the station is so badly served. I saw works going on building extensions, but they could also do something to modernize the inside for people with reduced mobility.

Besides the old fashioned station, I noticed that

the kings of the road are incontestable the cyclists ! For them everything is there, special riding spaces on the streets, parkings "en masse" and they are all convinced to have absolutely priority and ride everywhere even on the sidewalks. 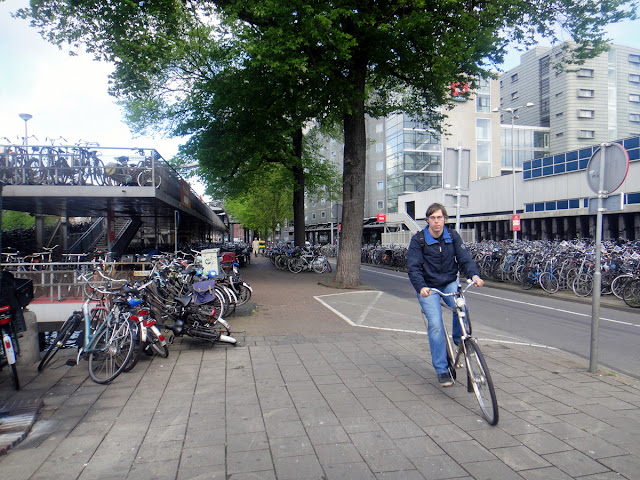 You don't risk to be overrun by a car, but by cyclists who are turning around you coming from all directions. The only thing you can do is jump aside when you hear a bell ringing. Poor tourists who are not used to that like me were jumping around not to be hit by a cyclist. They just don't pay attention and are quiet rude ! 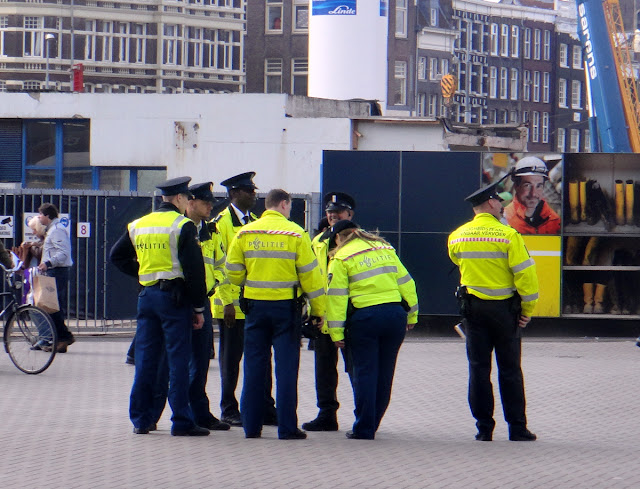 The police cool and relaxed  had a little street chat, while the tourists did their safety dancing to avoid the cyclists.
Posted by Gattina at 06:00 5 comments: