1. Besides doing some housework, I recovered from my weekend and kept quiet, I had caught a little cold and the medication I took made me tired. From a movie I watched on TV I saw the beginning and suddenly the end, I had fallen asleep !

2. We had wonderful weather up to 25° (77 F) ! Dominique my neighbor came for a visit and brought her birthday gift for Mr. G, a beautiful Ferrari key holder, he was very happy as he collects everything he can get from Ferrari ! I have my cat collection he has his Ferrari collection but there is still space in the house. 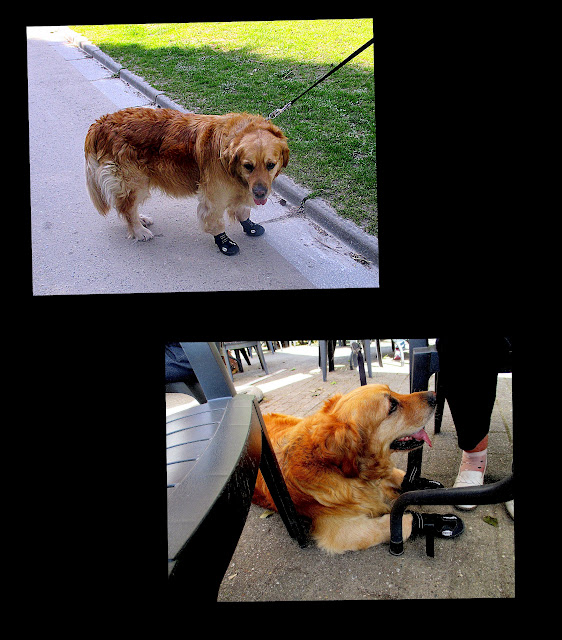 My friend Nicole's dog Charlie had surgery, a claw was taken out, which was crooked and on the other paw he had a nail infection. He looked so cute in his booties but wasn't happy at all to wear them ! 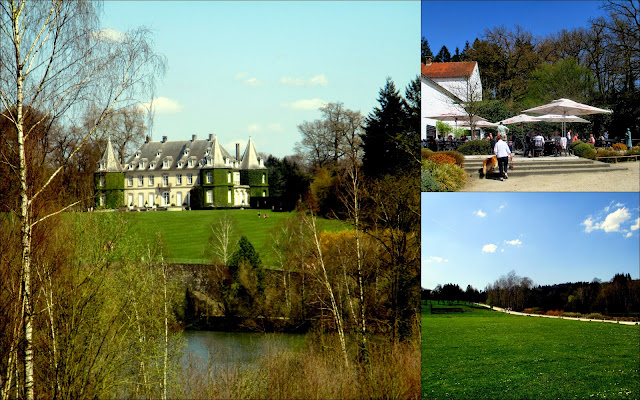 As he couldn't walk so much we went to the La Hulpe castle walked a little around and then enjoyed the sunshine on the terrace of the restaurant. Despite the fact that it was in the middle of the week there were many people there are also spring holidays in Belgium.

5. When we returned to my car, I noticed that I had lost my car keys ! I emptied my purse, looked in all pockets, nothing. Fortunately I always have my spare keys with me just in case ! So at least we could return home. 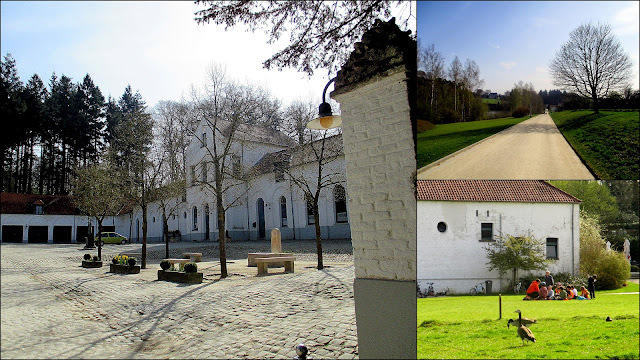 As soon as I was home I called the restaurant and half an hour later they called me back, somebody had found them and given to the barman.

The next day at 10.30 am I walked the long way to the restaurant which seemed to me longer than the day before, as cars are not allowed inside the park and picked up my keys. There was already a school class sitting in the grass and quite a lot of joggers.

It wasn't exactly my time for walking so when I arrived at my car I was tired for the whole day !!

But  I was happy to have my keys back !

THE VACUUM CLEANER MY SAVIOUR

When I was living in my own flat I was 23 ! I had enough to live with my parents where I never was allowed to invite my friends.

I was very happy in my little flat which had a bedroom a living room a kitchen and a bathroom. All what I needed.

One night I woke up switched on the light and saw a very big spider just sitting besides my slippers. I had never seen such a monster ! I got hysterical and didn't know what to do, I hate spiders, they are just so disgusting and I feared them. I got slowly out of my bed, made a big tour around the slippers and the spider, tiptoed into the kitchen, took my vacuum cleaner approached slippers and spider and put it on. The spider was quickly absorbed, but I didn't dare to switch off the vacuum cleaner I thought the spider would creep out again. I sat on my chair and waited leaving the vacuum cleaner on. I was so afraid it would come out again. After at least half an hour, I took the vacuum cleaner into the bathroom, closed the door and rolled up a blanket and put it on the bottom of the door. Then I returned to bed, still thinking the spider would come and creep on my bed.

The next morning there was nothing in the bathroom and I put the vacuum cleaner away before I went off for work.

Just when I left my flat I met my neighbor who lived above me and who was an old witch.

She was very angry and told me that she hadn't slept all night because I had done my cleaning in the night and on top with a vacuum cleaner. I please should clean during the day and not in the middle of the night ! 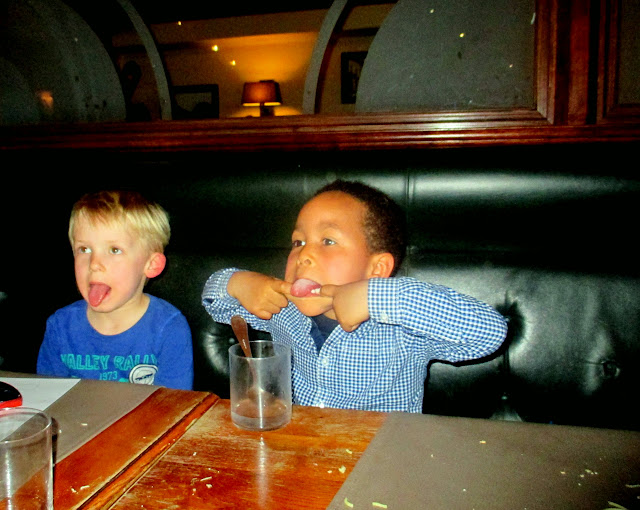 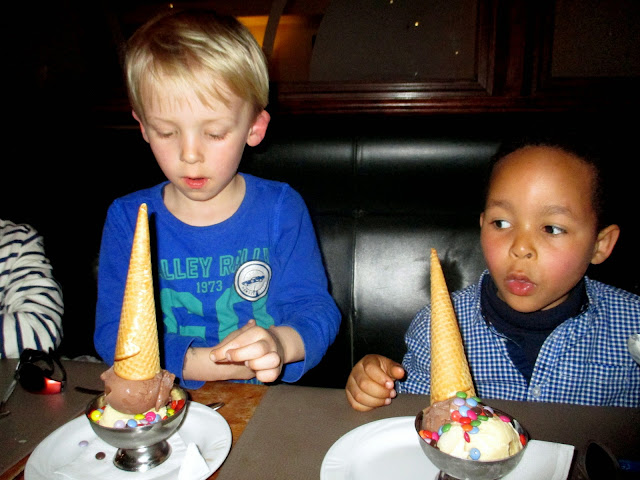 Grandson Toby and his friend
Posted by Gattina at 06:30 7 comments:

The park Cheneau is located in Braine l'Alleud, near Waterloo in Belgium.
The Cheneau park was once a private estate with meadows, small woods and the large castle garden.

Today, this area of 5 hectares has four tennis courts and a playground. The walk through the beautiful  ash and chestnut trees lead your steps to the castle of Cheneau. It is also called Chateau Allard and was built in 1906-1907 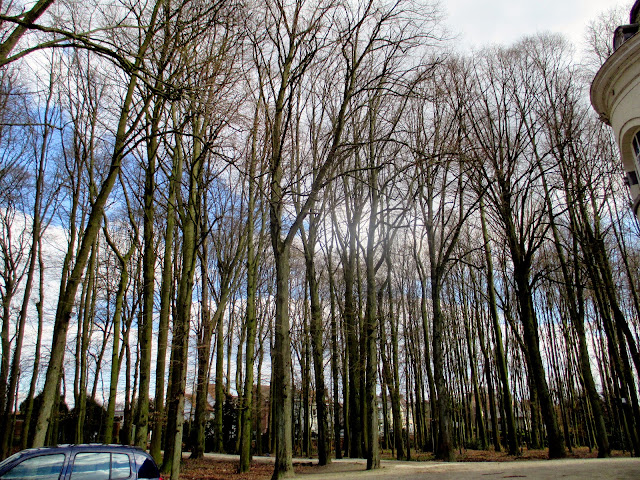 Mother Nature is late this year, so all the trees were still naked ! 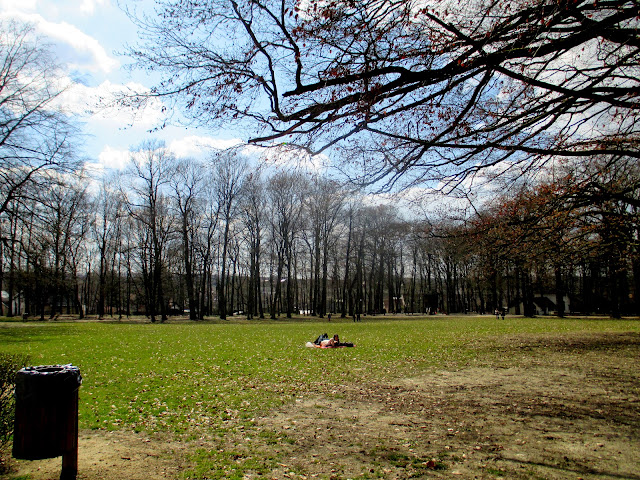 Still some a very courageous couple was laying on the grass 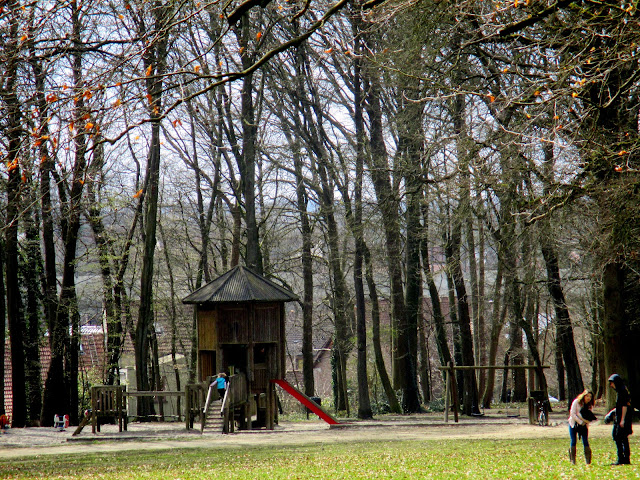 There were only few children playing in the playground 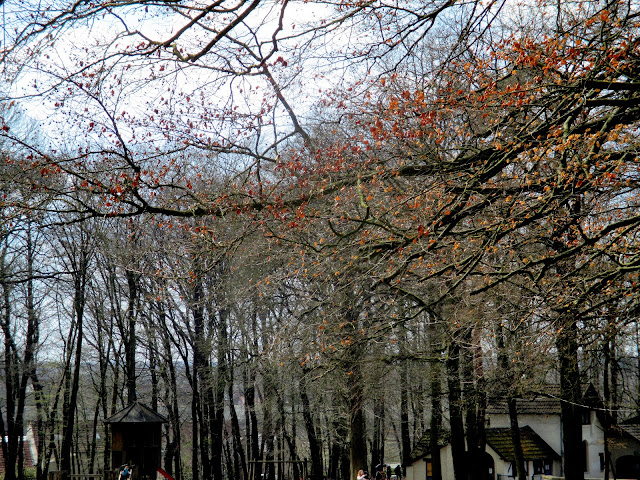 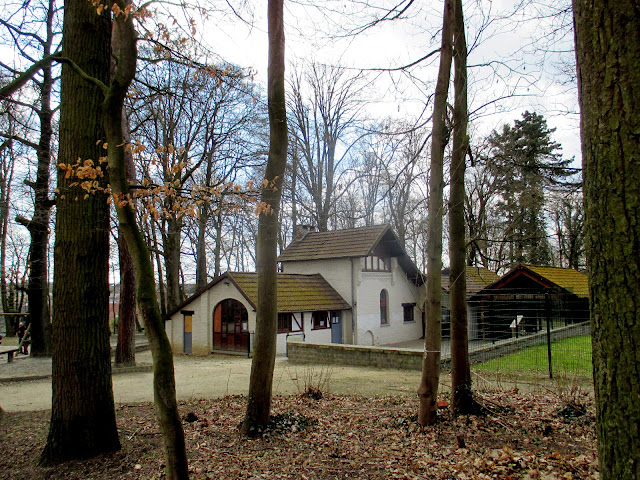 The old farm was closed 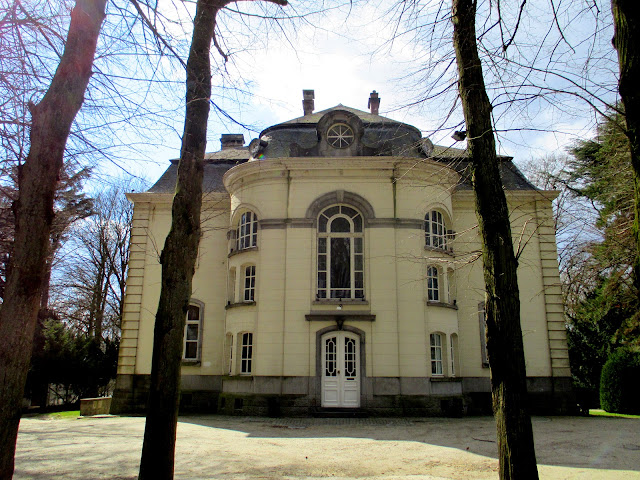 The castle looks more as a manor seen from the front 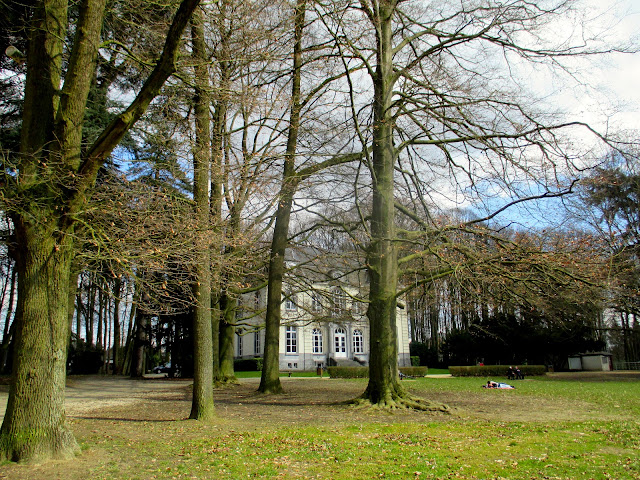 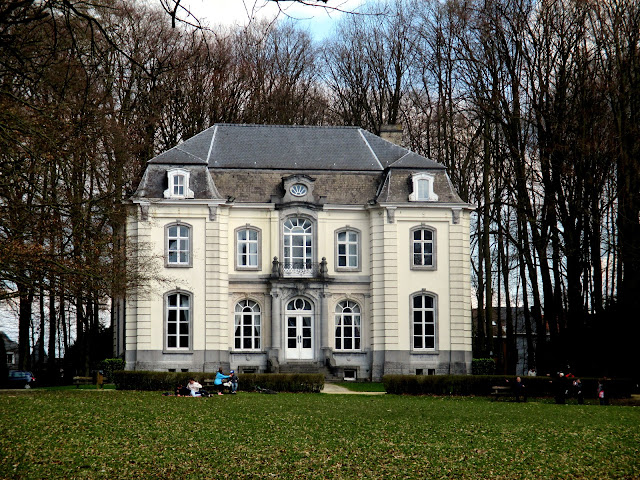 and from the back.

I didn't stay long, it really was cold, I decided to go back in summer !

Our son and family had arrived for the weekend to celebrate Mr. G's birthday. They slept at his best friend's home, so that Toby could play with the little son same age of his friend, to improve his French ! The sun was with us the first day and I went over to see them. Mr. G had his card playing afternoon. 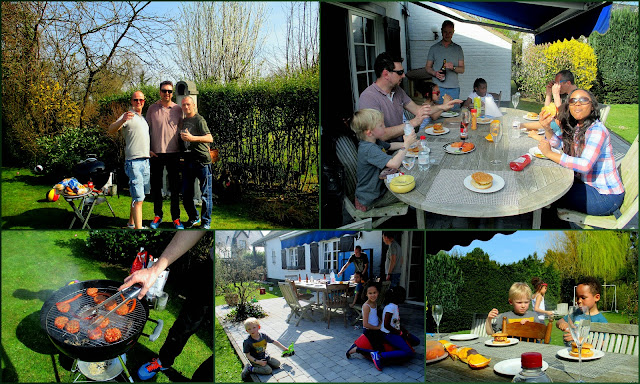 My son had prepared delicious hamburgers and enjoyed to see his friends again, he knew from childhood on. The little boys played together and devoured their hamburger ! I hadn't seen the friend's wife for a long time so we had a lot to chat ! It was a perfect afternoon in the warm sunshine.

The next day it was raining ! My son brought the children over and they played inside, 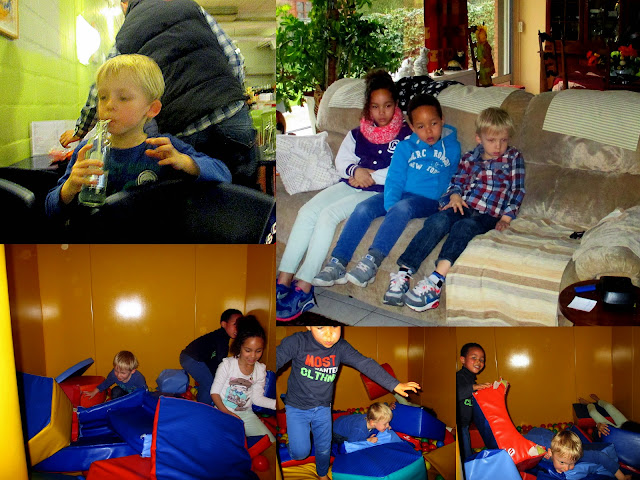 They watched a little TV and in the afternoon we went to a covered playground where they ran around and played to their hearts content, while we adults had a coffee and sat in the bar. 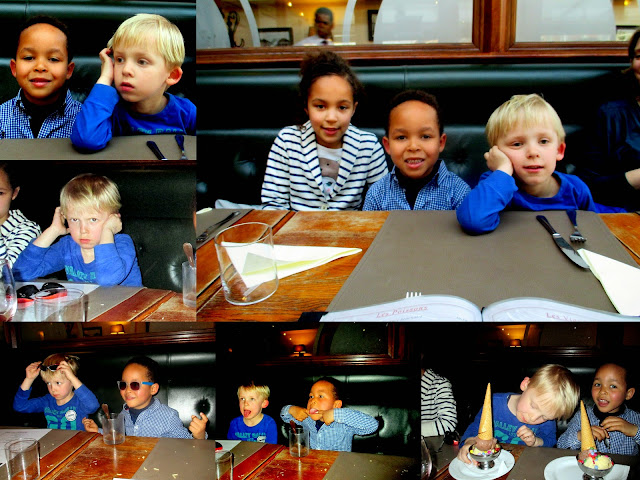 In the evening we went all together to a nice restaurant. Of course it was boring for the children to wait for their Spaghettis, but the ice cream afterwards made the waiting worthwhile.

We returned home alone and fell into our beds ! Not used anymore to have little kids around, but we enjoyed it very much.

The next day we had again a wonderful weather 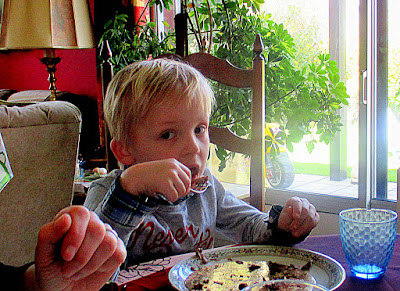 I forgot to take a picture of Mr. G's birthday cake, which our son has brought along, all I could get was the little rest on Toby's plate !

Toby had discovered our croquet game 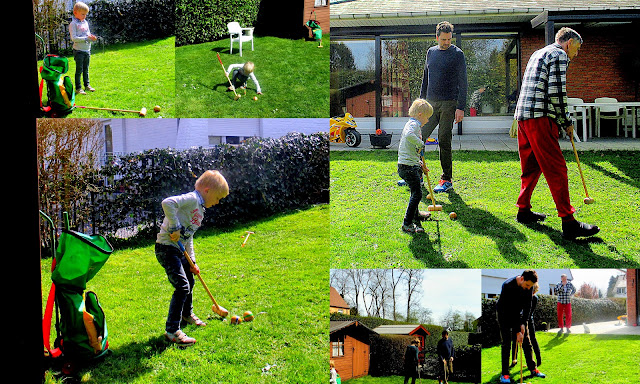 and the whole family played together, except me, I was too lazy and then I had to take pictures ! 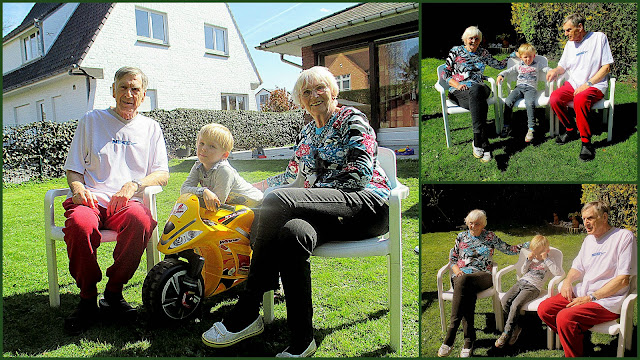 At the end we wanted to make a nice picture of us with Toby, but the sun was so bright that it hurt his eyes and he didn't want to pose anymore, only sitting on the motor bike could convince him to pose.

Time flew by so quickly and they had to return to Amsterdam early has Toby has school again on Monday.
Posted by Gattina at 06:30 13 comments: