1. The week started with rain and storm and the only thing to do was staying home not to fly away. 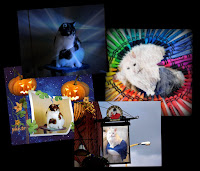 Fortunately I had quite a lot to do with photo creations and the day flew by only too quickly. In the morning I had my aqua gym with another "teacher", the exercises were more hard to do but I managed the result was that after lunch when I watched my little crime series which I fortunately had recorded, I fell asleep and only saw the beginning and nearly the end, I woke up just in time before the murderer was known and quickly did "rewind" !

2. We had to put the heating on again, what a difference to only a few days ago. Besides going quickly out for food shopping I spent the day behind my computer and did street watch. There was not much to see only moody people who had to walk their dogs. I am lucky, my cats walk themselves alone !

3. With the storm a big branch from the rather far away weeping willow which belongs to my neighbor just besides our house, had been blown into our garden ! 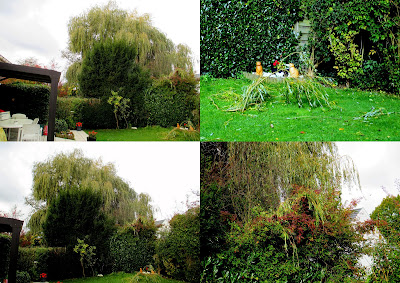 And not only on the grass but on the bushes too ! Our neighbor is the most awkward person in the whole street. He never cuts anything in his garden and it's all growing wildly. To complaints he doesn't listen, he just smiles and walks away. Mr. G. carried the branch over to him, and put it on his entrance.  There was nobody. So far we haven't heard of him, because on top of that he is a real coward ! He and his wife were working in a insurance company, they should know what damage that costs ! It is also illegal to have such a huge tree in your yard, but as long as nobody moves, he doesn't care ! 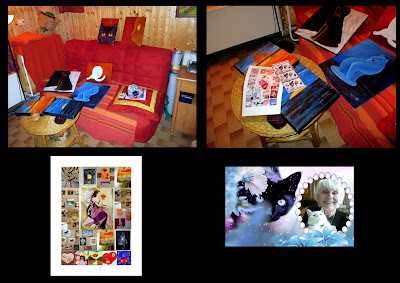 This weekend we have our yearly painting exhibition and I spent the whole afternoon with preparing my paintings, put nails and cords on them, painted the borders I had forgotten to paint and made a label to put on my paintings.

5. It was a lot of work to prepare our exhibition ! 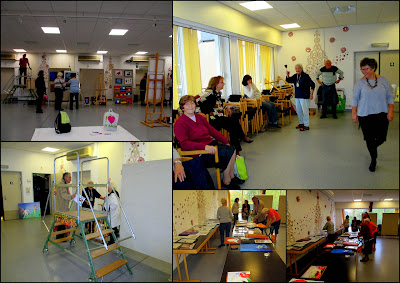 Everybody had brought his master pieces, and we put them all on the table, so that our teacher could select the once which would be selected. Our "administrator" used her bell again, before she gave her instructions. 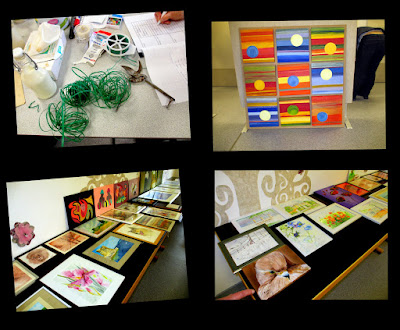 The work tools lay on the table and the paintings too 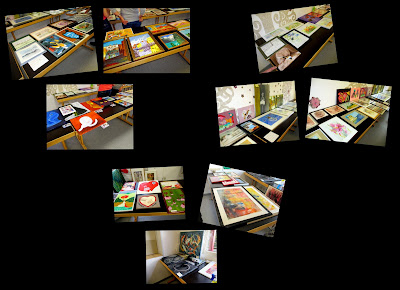 Finally the selection was done, and tomorrow we will hang up the paintings and decorate the tables with the paintings  for  little easels.

I returned home and in the afternoon I drove my friend to the hospital to get her eye shot !

MY FIRST EXPERIENCE WITH WINE

The parents of my best friend when I was about 8 years old, had given a party. For this occasion they had prepared a big bowl of what is known in Germany as "Bowle". The drink contains fruit pieces and white wine and was very much in fashion in the 50th and 60th.

The next morning  just after breakfast, I went over to my friend, her parents were still sleeping and she was busy to clean up the kitchen. I found this wonderful, at home my mother never let me in the kitchen and certainly not doing the dishes ! She was far too afraid that I would break something. My friend as she had to do this all the time, found it less funny and was pleased that I did it ! While doing the washing up, I discovered a big glass bowl, full of fruit pieces. I wondered why they hadn't eaten all the fruits and in order to wash up the bowl, we took a spoon and ate them all. We became more and more cheerful and also very loud and suddenly I couldn't remember anything anymore.

My friend's father woke up from this noise and had opened the kitchen door. What he found were two little girls laying on the floor completely passed out ! The mother screamed the father checked, we were both still very much alive but completely drunken ! The fruits had soaked up all the white wine in which they had laid the whole night and of course were full of alcohol.

He first put his daughter in her bed and then took me in his arms, still unconscious and carried me over to my parents flat. Of course in these after war buildings people lived very close together, so the whole neighbourhood was watching this event.

My mother got hysterical seeing her daughter hanging in Mr. R's arms and screamed, which made all other neighbours in the house open their doors and look what happened. My father took me over and put me to bed, where I stayed until I woke up and wondered why I was in my room and not dancing and laughing with my friend in their kitchen !

I honestly don't remember if I had a hangover or not, but from this day on I didn't like fruits in a liquid anymore ! 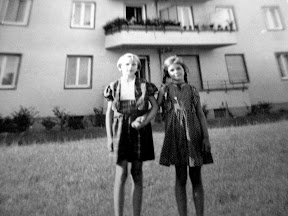 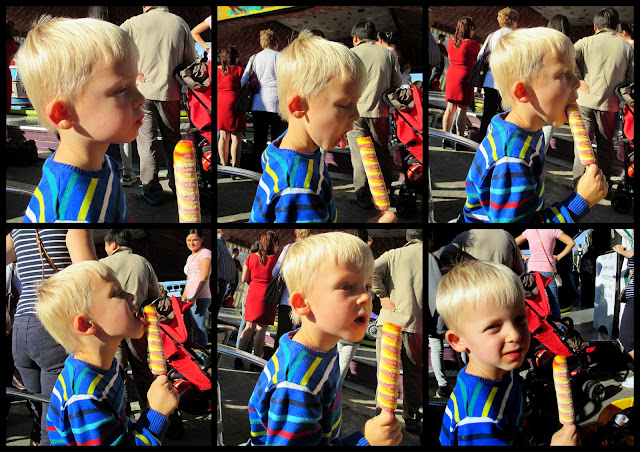 OUR WORLD - A PARK NEAR BRUSSELS

We are approaching the end of October and the temperatures are unusually high, even warmer than some summer days. We had over 25° C (77 F) and with my son and grandson we  took the opportunity to go to the Domain of Huizingen on the outskirts of Brussels. 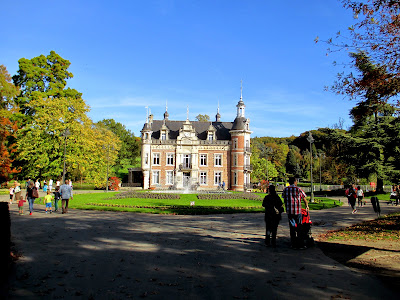 The former castle contains now a restaurant and reception rooms for special events. 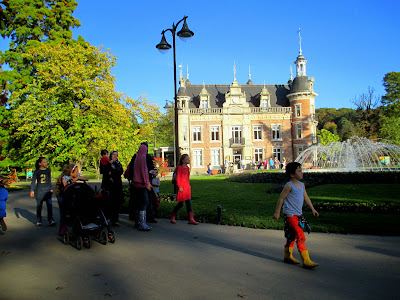 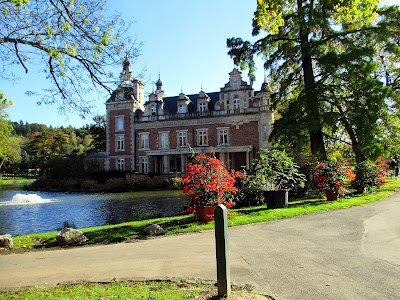 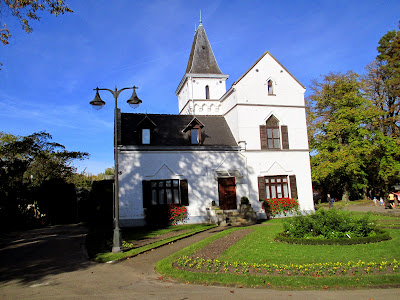 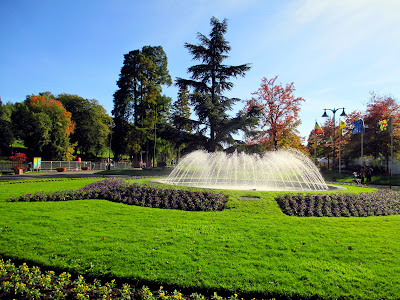 and the fountain in front of the castle 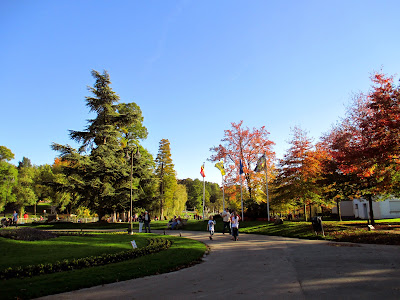 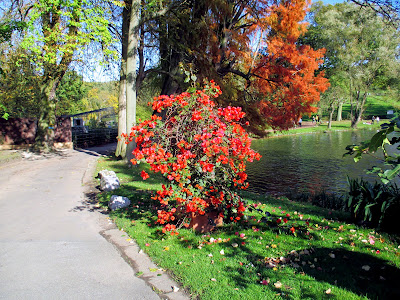 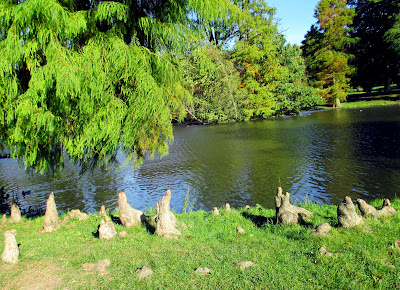 Strange roots coming out of the ground 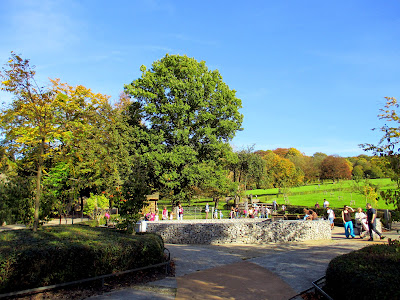 Many people had the same idea as we had 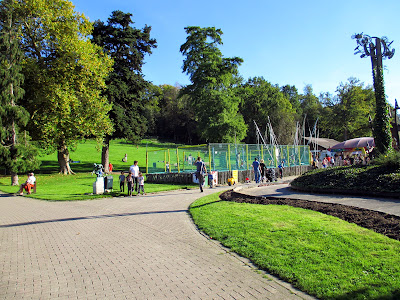 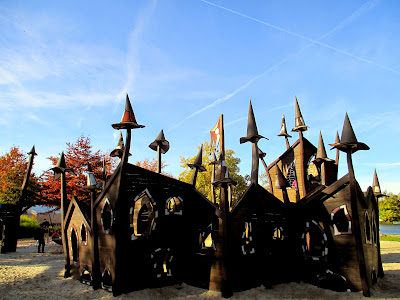 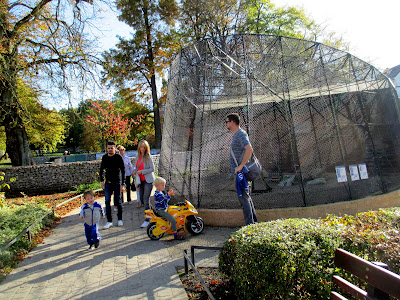 and for the children there is a very nice playground !

MY WEEKEND OF OCTOBER 18

We had our son and grandson here over the weekend. They arrived Friday evening from Amsterdam. 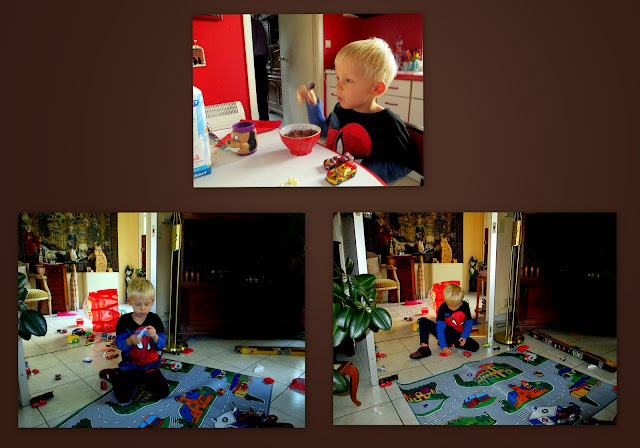 After breakfast, he started to play with the new little cars with an adequate carpet Mr. G. had bought for him, this kept him very busy for a while.

When both men decided to go shopping, he didn't want to go with them and preferred to stay with me. 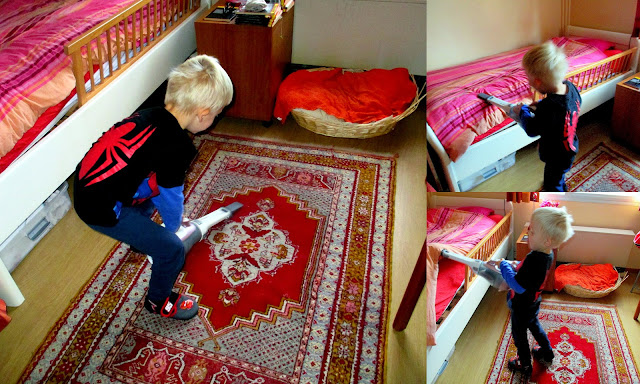 He discovered the little vacuum cleaner I keep in the kitchen and started to vacuum the whole house, especially Mr. G's bed, which apparently seemed very dirty to him. I never had such a good little helper ! 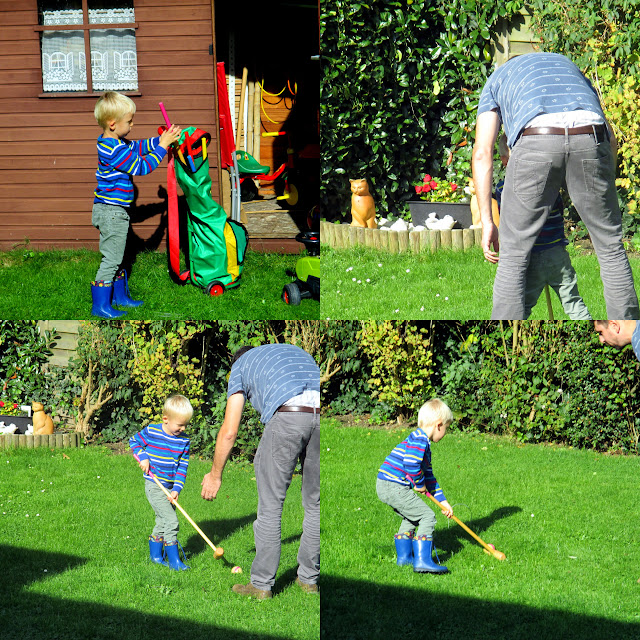 So he could play outside and hadn't forgotten the croquet set I kept in the shed. The tricycle I had bought for him, he didn't like apparently. The croquet game didn't last long as Dad wanted to show him how to really play and he just wanted to shoot the balls. Amazing is, that he put everything back in the bag and tried to carry it in the shed again. His father at the same age would have left everything there were it was !

The little tractor I had bought him, on which he had driven around since he was 2 (now he will be 4 in November) had become far too small but he tried hard to squeeze on the seat and drove around.

When his Dad came back from his shopping, 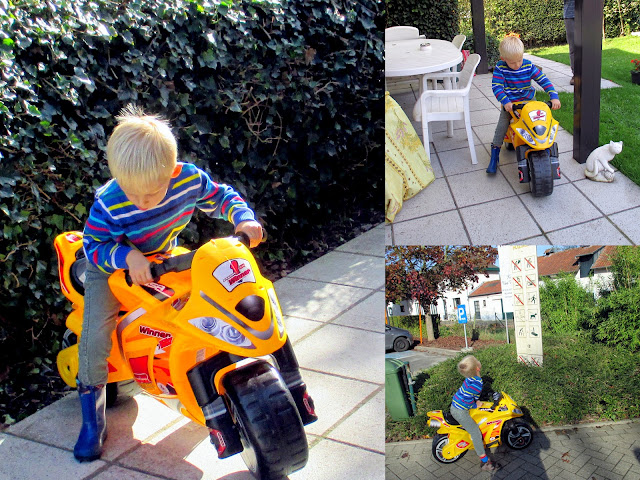 What a wonderful surprise, he had bought at big bike ! Was he happy ! In the afternoon we decided to go to the Domain of Huizingen which also has a huge playground for kids. Feeding little goats, making 4 turns on the carousel and having an icecream, 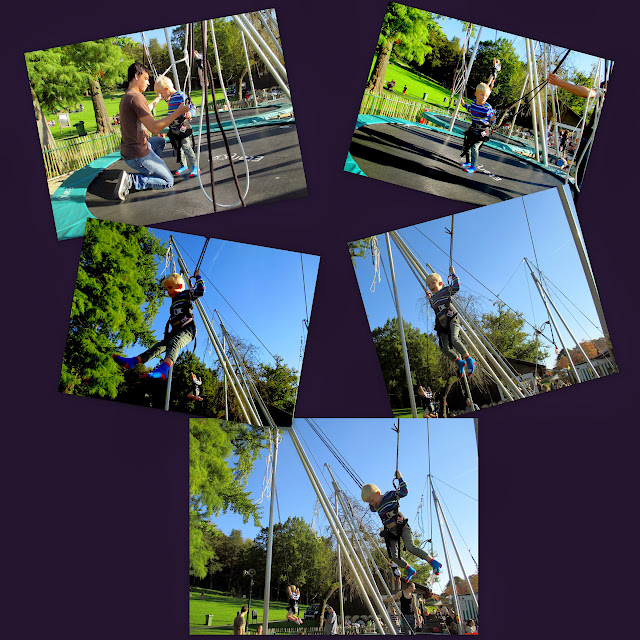 He did some jumping while my son and I watched him "flying". Then we returned home.

I had my theater play in the evening, and went with Ilona and Nicole. It was a very funny play and and we liked it very much. Before we had our supper in the Theater restaurant. The 3 men meanwhile also went out eating. When I came back I found Mr. G. for once not in bed but still up, together with my son and his friend around some glasses of wine and in a very joyful mood ! I went to bed and Mr. G. too, I don't know for how long the two friends celebrated with their glasses sitting outside in the garden !

The next morning, as all little kids do, they get up far too early for the parents, especially when they had celebrated the night before. My son half asleep, handed me over Toby and returned to bed ! It's nice to be for a while without  parental duties !

Toby speaks only Dutch but he understands most of what I say in French. During his breakfast  the words he didn't know I made a little drawing for example a bone, when I told him that dog Charlie eats big bones. That was a lot of fun. After that I put him in front of the TV with his breakfast and he watched Tom & Jerry. The good thing is that grandparents have no educative duties so exceptions are greatly appreciated !

After breakfast and Toby had cleaned his new bike, we took a breeze of fresh air in the Waterloo park. For once Mr. G came with us ! Toby drove and played like a Star, with his two body guards, one of them slightly tired and I as his photographer.

Time flew by and they left after lunch. The rest of the day we spent resting and recovered from this nice interruption of our daily routine as a vintage couple !
Posted by Gattina at 06:30 7 comments: 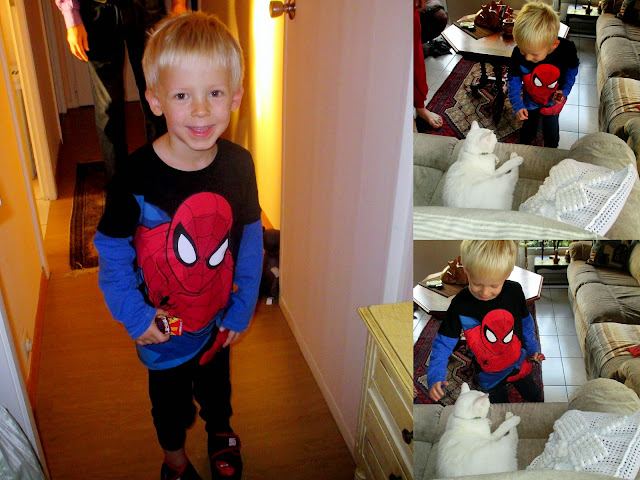 Grandson Toby on visit with bodyguard Daddy. Arthur is happy !
Posted by Gattina at 07:26 6 comments: