The week started me feeling like on holidays, the sun was shining and it was warm, despite the weatherman's announced rain ! 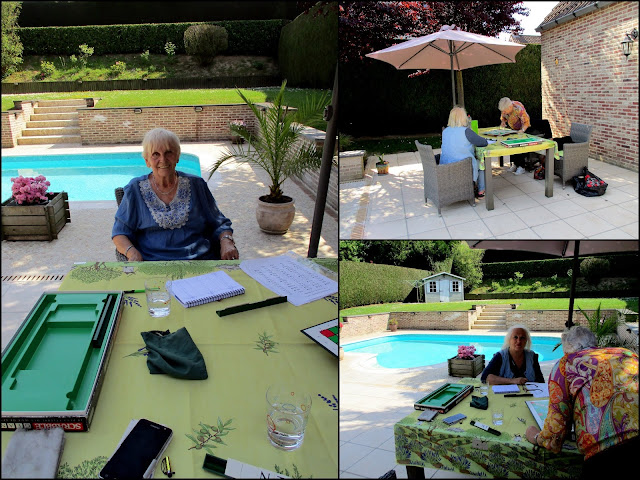 We could scrabble outside. We were only 3 because Nicole is on Holidays in Turkey and the other friend makes a round trip through the USA. It's always nice to get together and after the game we chat over a cup of coffee with cake.

The fake flowers in our front yard got competition 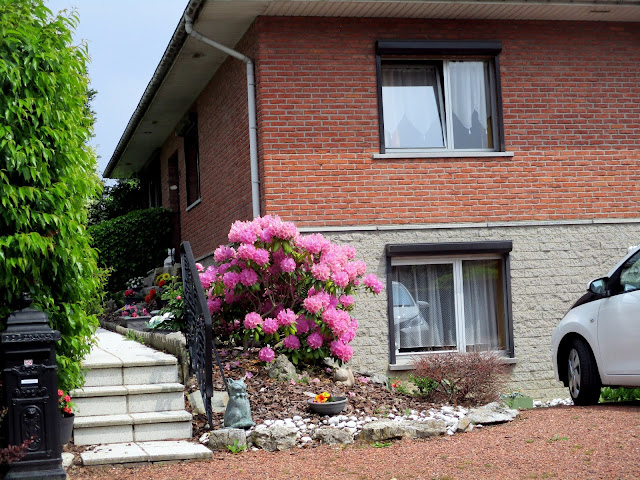 The rhododendron was in full bloom ! Unfortunately now it starts to loose the petals !

This year in August I will make a big trip as you can see below ! I am travelling with my friend Bunny and we had to prepare all documents and papers and whatsoever for the Russian visa ! 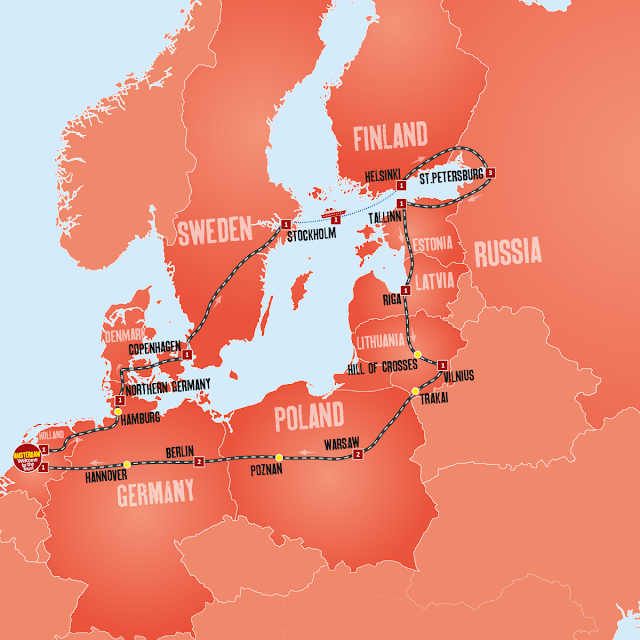 It was so complicated ! Now we have all informations I "only" have to fill in the application form and gather all requested documents. To my surprise when I called the Russian Embassy the guy spoke English and not French. In the past nobody spoke English it was forbidden because of the cold war. The only foreign language which was allowed was French the once official language for diplomats. At the consulate it was the same but I could choose between English and French, but the girl there also preferred English.

Aqua gym was as usual, we were not many people, most of the retired people are on holidays now to avoid the mass with children and expensive prices in July and August, which is high season mostly everywhere. So we had more than enough room to hop around.

It had been over a week that we haven't met Ilona, because she had a lot of work to do in her house, replacing the floors, paint the walls etc. But yesterday we could sit in her garden it was so warm that we moved into the shade under a tree. 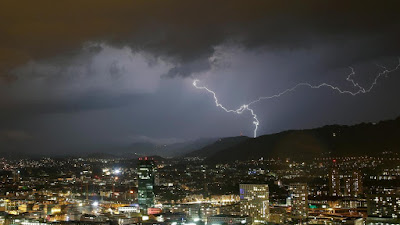 In the evening a thunderstorm started, fortunately apart from very heavy rain we had nothing, but in other parts around Waterloo there were a lot of flooding, and lots of damages ! Poor people who lost all their furniture and the houses are full of mud. 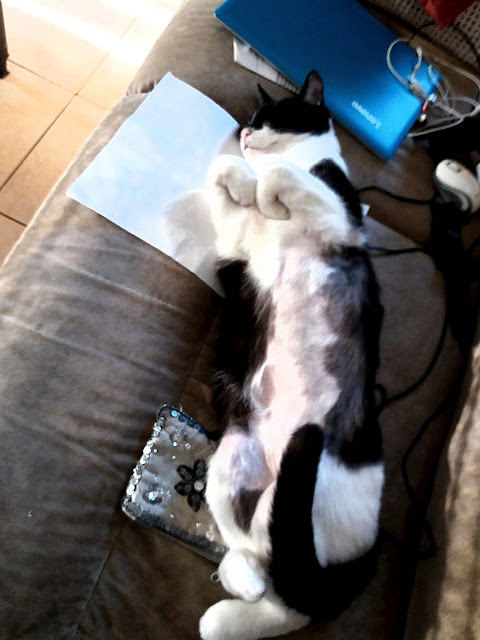 
1. The last place you visited/patronized where you felt like you were given 'the royal treatment'?

2. The last task you completed that was a 'royal pain'?

I never heard this expression : because when I am in pain I always think, now my end is near, so I don't know what should be royal in this situation ?

My faults ?? can't remember that I was hindered by anything in my professional life !  And at home the fault I have is that housework is not my cup of tea and that maybe hinders something in the house ?

4. If you found a remote that could rewind, fast forward, stop and start time, what would you do with it?

If it still looks nice and clean and works I would use it instead of ours because ours becomes old and is a bit used up ! Or maybe I should sell it ? Who needs a remote control ?

5. Any special plans for the Memorial Day weekend? Will you in some way honor or recognize the meaning of this day (remembering people who died in service to their country)? Have you ever been to Arlington National Cemetery? Does your town do anything special to mark the day?

There was no Memorial day this past weekend nowhere in Europe (to my knowledge) .. We celebrated Pentecoste (whitsun) although a lot of people enjoyed the long weekend without knowing what Pentcoste meant or why the day was off. I remember that Jesus went again to heaven according to my 8 year old son who had learned it at school : Jesus died and weeks later he was still alive and went to heaven. I have no idea if my grandson knows that ! We stayed home and enjoyed the nice weather !

6. Insert your own random thought here

I think that I have to call the Russian embassy to ask for a visa and what documents they need.  I hope there is not too much papers to be filled in ! Since I am retired I am allergic to all paperwork !

Each year in spring it is the same when you have a garden (yard) and you have to prepare it for the rest of the year or almost because the seasons have changed. At least that's my believe !

This year we also had to "repair" the damages our internet provider had done by digging a deep hole in our garden by mistake !! This part of the garden had to be completely redone.

I don't have a green thumb and reduce garden work to a minimum  and Mr. G. never had.

This part of the garden had to be covered with a thick plastic which doesn't allow weeds to grow and then covered with barks. 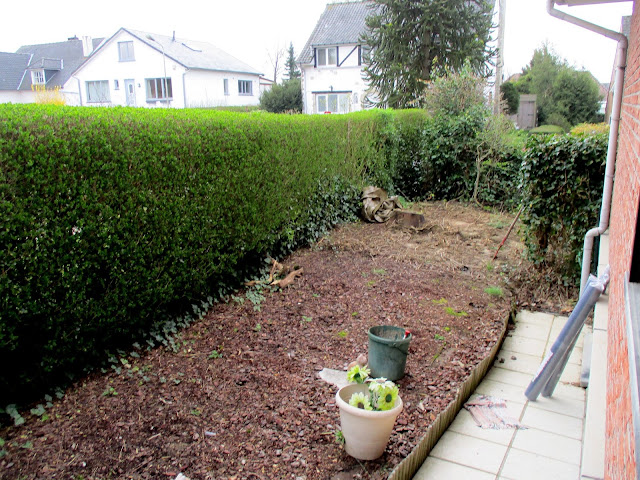 Of course Mr. G. couldn't do that anymore and I hired a gardener 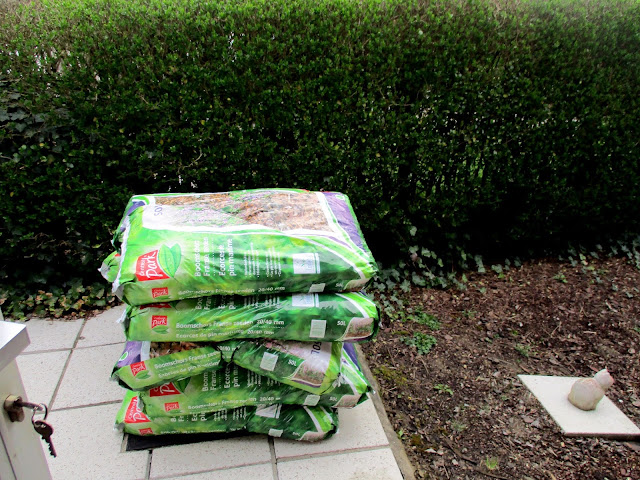 it was quite some work  ! 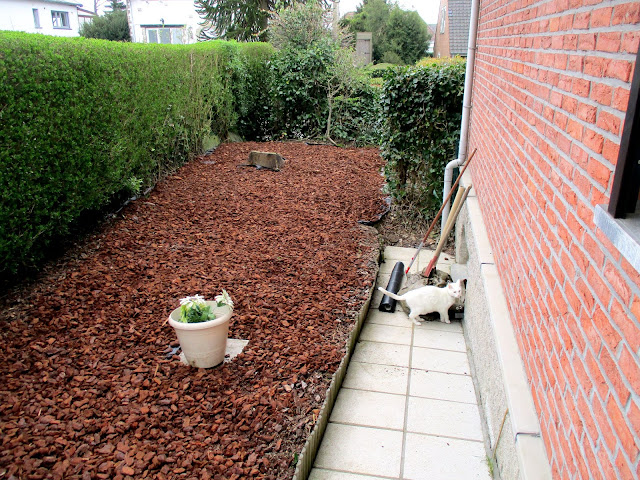 Now it looks nice and clean 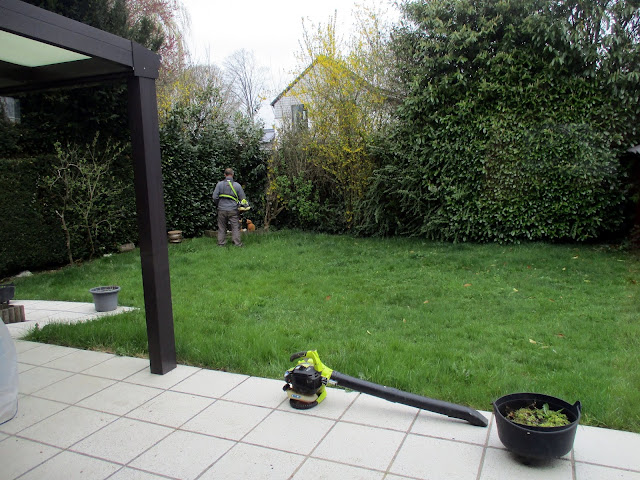 He also cut what had to be cut in the shrubs 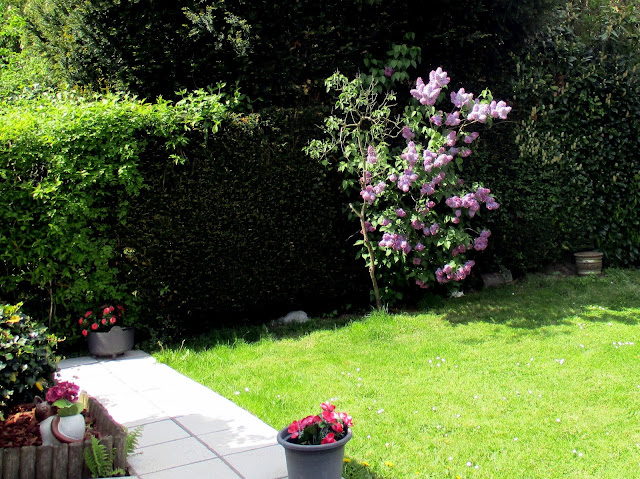 Now it's nice to look at the blooming lilac 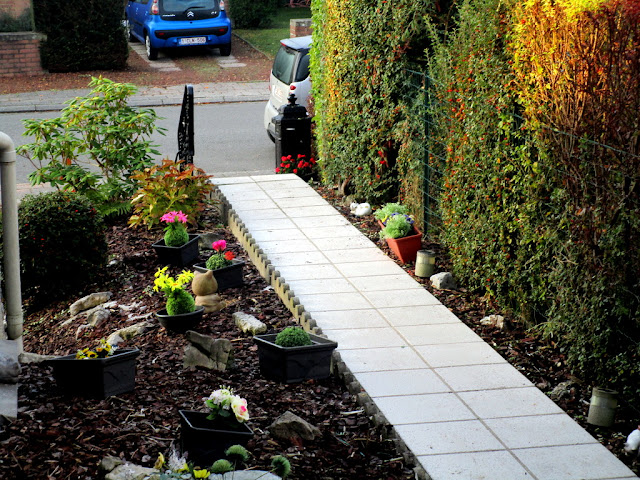 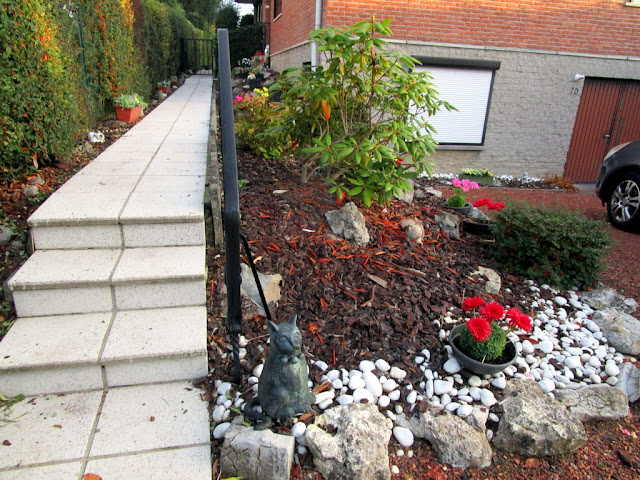 I put fake flowers in my pots so I don't have to water it and nobody can see that they are fake when people walk by our house. 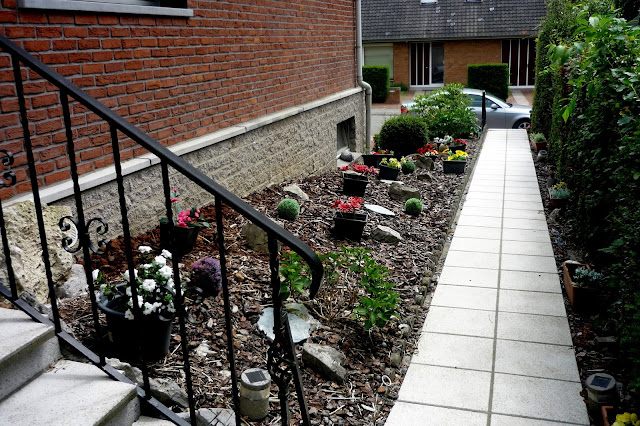 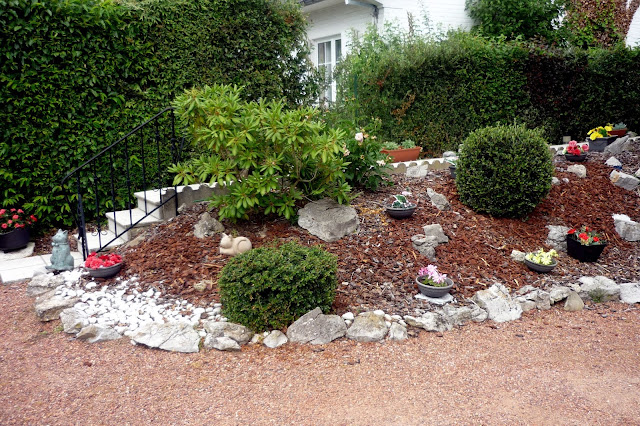 I honestly don't care, the most important thing is that it looks nice and clean. 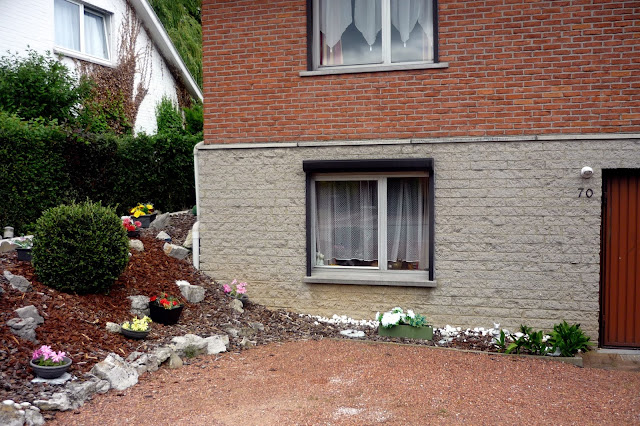 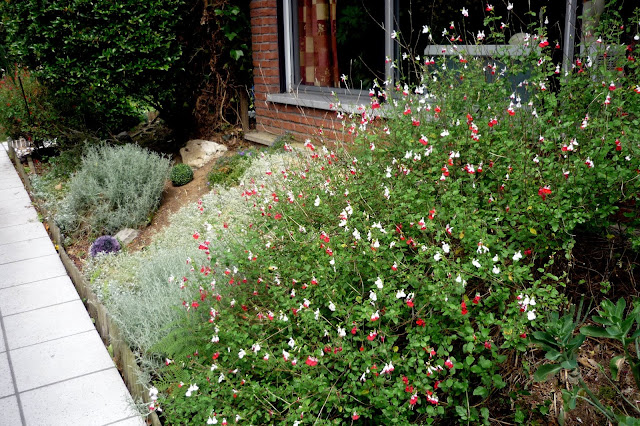 and on the side a rockery

We have been told to let some weeds in the lawn like daisies for the bees because we all have to feed them otherwise they die out. Therefore I have a good excuse not to pull out weeds all the time !

Labels: My garden, Our World

It was the weekend of Pentecost or WhitsundaY. Therefore all shops and stores were closed and a lot of people away to the sea or in the Ardennes as it was a long weekend. Monday is also a holiday and everything closed.

Anyway I had to sort out my photos which kept me busy.

But before I have been in Windsor because I was invited to Harry's and Megan's wedding ! It was a last minute invitation and I badly needed a hat because all ladies would probably wear a hat ! and I found a nice one ! 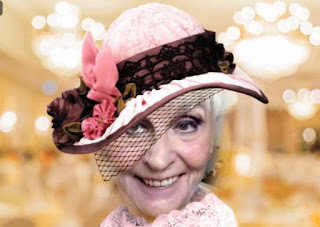 Unfortunately this was only a dream, in reality I was laying on the sofa and watched this very special wedding on TV. I took pictures just for me when I read my blog in a few years. 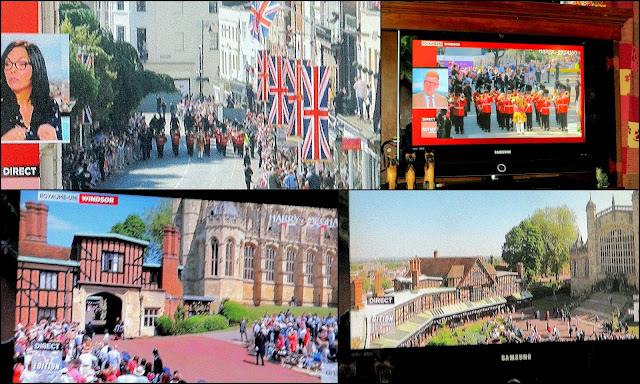 I watched on the Belgian channel RTB where it started already at around 10 am (in the UK it was  9 am) They showed the little town of Windsor the little streets and explained about the castle and its  history. It was very interesting. Then for those who didn't really know the couple, they talked about them both. how they met etc.

Then the first guests arrived 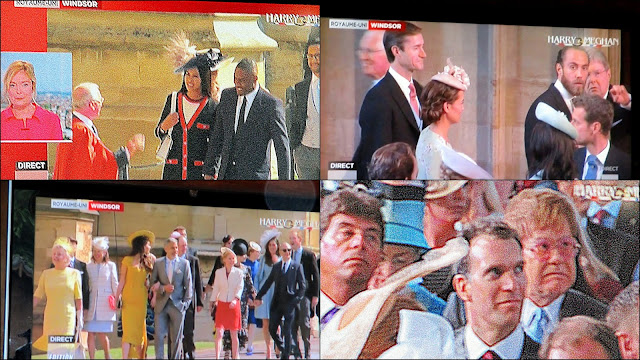 I recognized Pippa the sister of Kate and underneath George Clooney who was the only one not wearing a dark suit but a silvery thing and not very respectfully had always a hand in his pocket. Therefore his poor wife looked a bit overdressed ! There were many more celebrities but I thought I would find better pictures on internet. 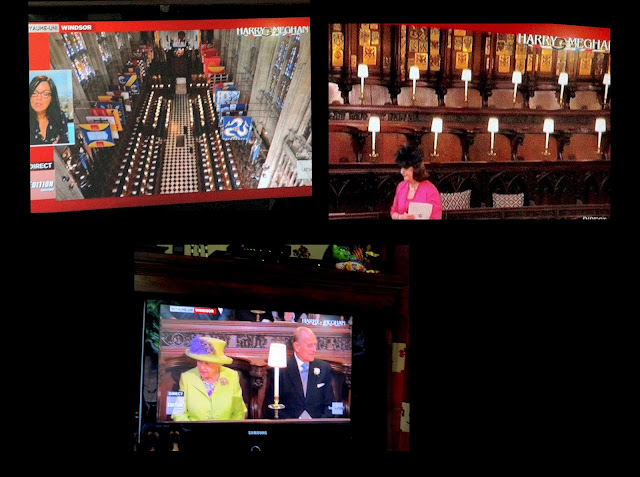 The inside of the church and the Queen with Prince Philip. I had been in this church one day after Edward (youngest son of the Queen) married Sophie Rees Jones in 1999. It was a pure coincidence that I visited the church just one day after their wedding, but I was visiting my son who lived in London at that time and he wanted to show me Windsor and it's castle. I remember that I found the church very small inside and wondered that so many guests could sit in there. There still also was the floral decoration. 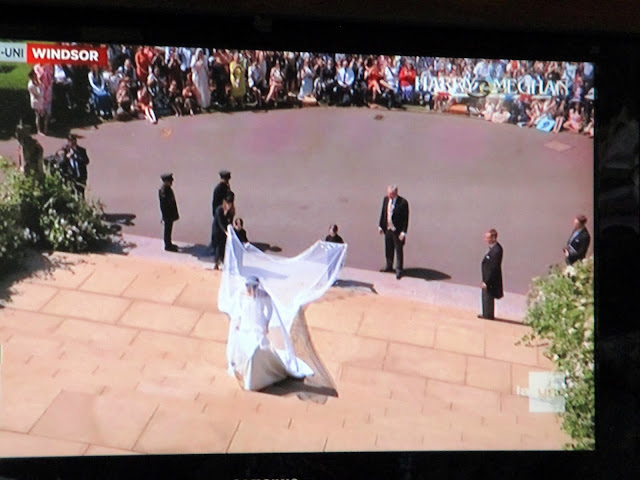 arriving of the bride who walked alone up the stairs and 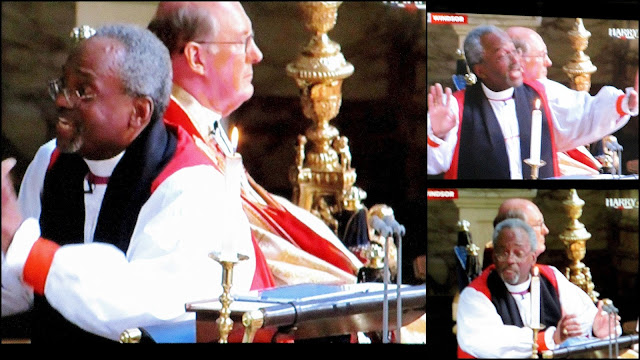 Before the marriage vows, officiated by the Archbishop of Canterbury, the assembled guests – plus many millions watching on television around the world – heard a sermon delivered by American preacher Michael Bruce Curry, the 27th Presiding Bishop and Primate of the Episcopal Church. I loved it ! He was speaking and gesticulating like 10 Italians together and I saw in the public that a few people had to smile (the younger once even laughed) and the others tried to remain serious. Never in my life I had heard a preacher like him in this outburst of temperament !The Bishop behind him didn't move I thought he looks like a figure out of Mme Tussaud's wax cabinet ! The contrast of both men was hilarious. 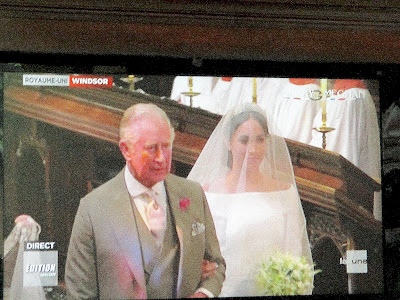 and then took the arm of Prince Charles. 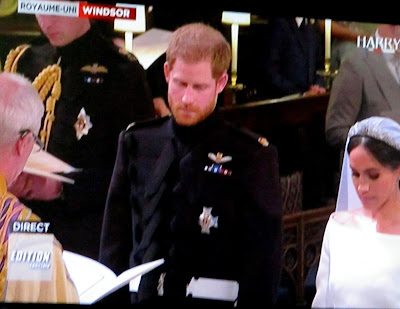 I watched until the end when the TV channel returned to the News ! I didn't want to go from this beautiful wedding to the ugly and bloody news we have each day !

I didn't do anything else I was feeling lazy and a bit tired. So two days staying home and work a bit on my computer was a nice rest. 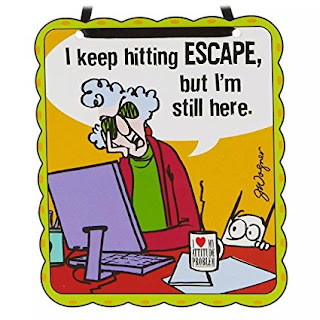