1. Finished the days where you could sit outside, we are back to winter and had to scrabble inside ! Our heads were smoking so much did we think to find words which bring the most of points. At the beginning I always looked for long words which brought little points now the penny dropped and even if I only place one letter and get more points I do it. Result for the first time I won ! 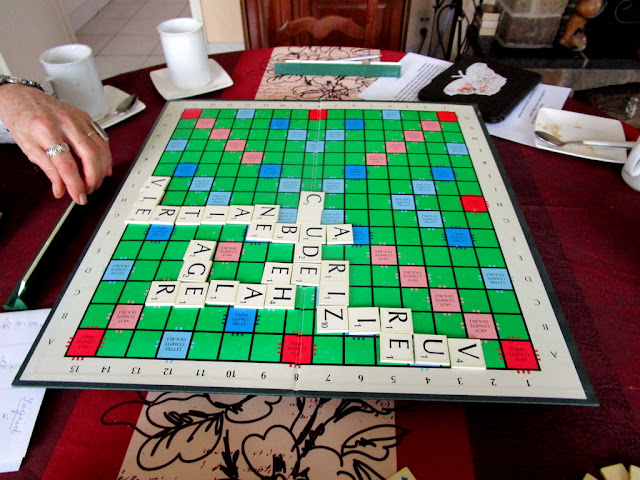 our scrabbble board is a special one for half blind people, with huge letters. This suits everybody because they all need glasses to read, except me, I have to take the glasses off because I am shortsighted !

2. My oldest neighbor Vivi since 1975 had lost first her cat and then her dog one month later and she was in a terrible state. On top of that she is not allowed to drive anymore because even with the shots in her eyes she doesn't see enough anymore to be able to drive. It would be too dangerous.

Being prisoner in your own house is not very good especially when you were used to often go out. Her daughter who lives with her and takes care of her decided to take another dog, not a young one but an older one and she found this cute dog a little female 5 years old which was found on the street and brought to the shelter. 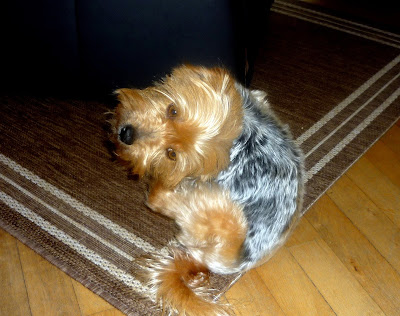 I crossed the street to see the new family member, which is very cute.  They called her "Fripouille" which means "Scoundrel" but in a nice way and now Vivi is happy, at least she has a companion and can walk outside with her.  She is far bigger as she looks on the picture and is not a pure breed neither.

3 After shopping I thought I will have a drink at the Waterloo Lion, to see if there were many tourists climbing up the hill. The sun had come out and I could sit on outside. 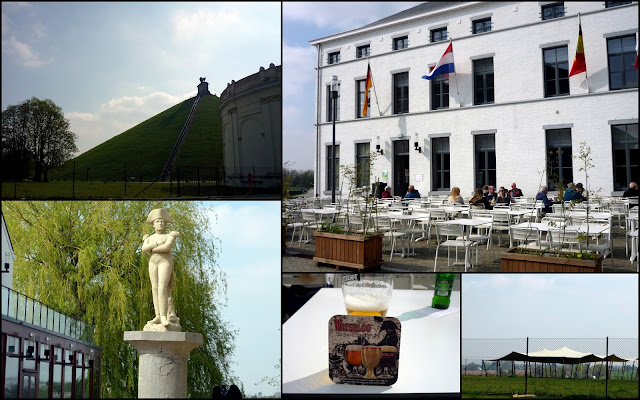 There was a group of Russians and some other nationalities, ever since the renovation of the site for the bicentenary in 2015, where all old restaurant and houses were shaved away, it looks rather empty and Napoleon is not very pleased. I saw a tent for probably a show on weekends to attract tourists and payed 4 Euros (4,30 $)  for a beer which a year ago costed half the price !

4. My friend Nicole had asked me to come with her to the Waterloo Bowling. She wanted to celebrate her 78th birthday not the traditional way but a little different. She wanted to book a bowling party  for her son and daughter plus partners and the 3 adult grandchildren and as she lives nearby afterwards the traditional cake at home. I found that a great idea and we met at the bowling 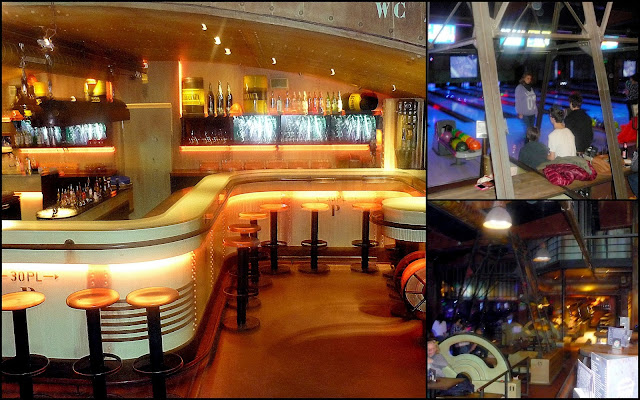 Despite the sunny (but cool) afternoon there were quite a lot of people playing. 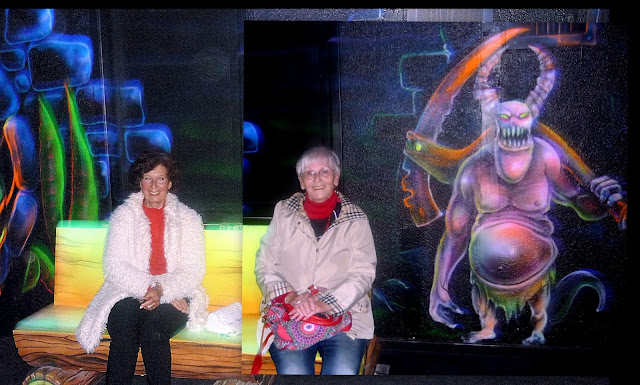 There was also a Mini Golf for children, which she wanted to show me for my grandson. It was real scary in there, dark and full with monsters and everything what little once like today ! The children all wore fluorescent jackets, so that you could see them.There was a group of 6 to 8 year old kids playing, and had a lot of fun.

5. As desert for Mr. G's birthday I had bought a chocolate cake which was made out of
little bunnies. 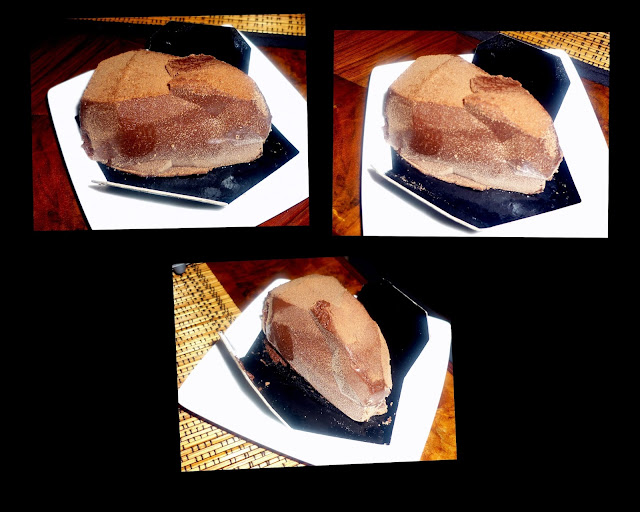 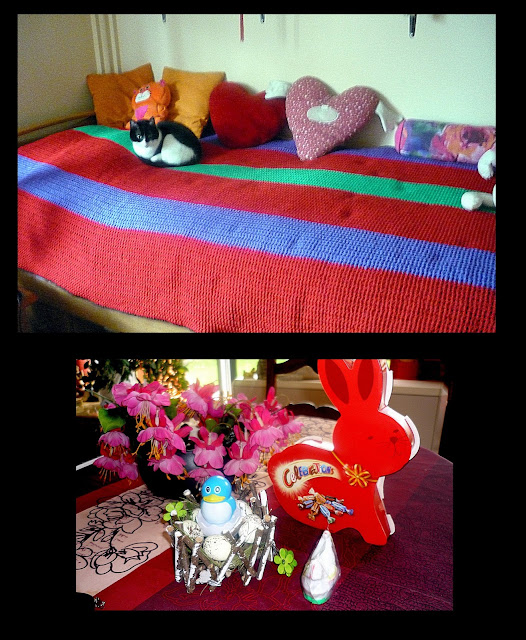 For Easter my cleaning lady had crocheted this beautiful bed cover, which Rosie had to try out of course and a little nest sweets in the red Bunny and a chocolate chicken ! We really were spoiled ! 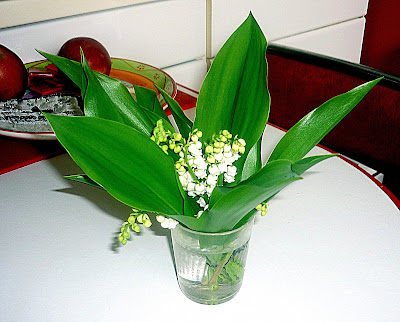 For the first time in my life the lillies of of the valley are blooming in April !! Normally they always bloom beginning of May and it is the use to offer a lilly of the valley for the 1st. of my. But this year I could offer a little bouquet to Ilona's mother for Easter ! She is 90 and couldn't remember either that this ever happened !

more participants at Susanne at Living to tell the Story.
linking to Willy Nilly Friday five 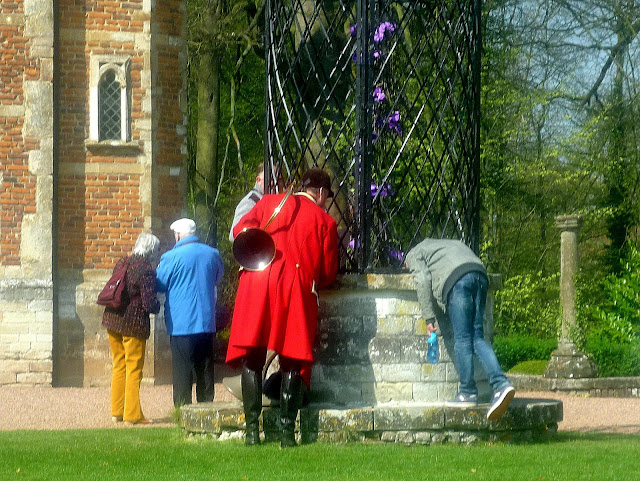 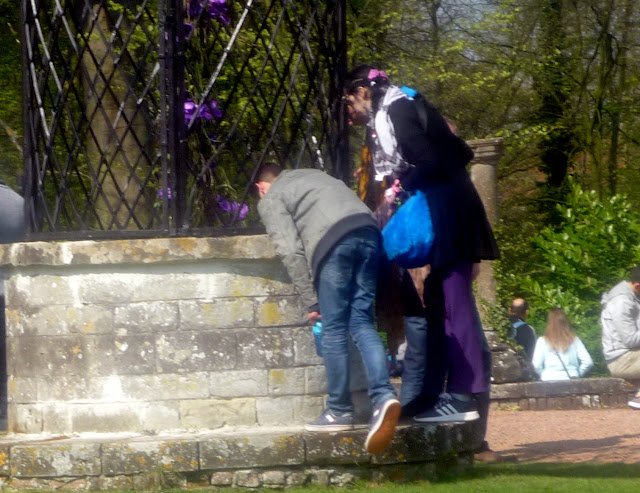 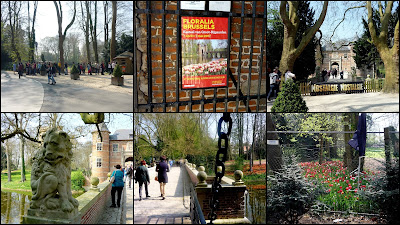 The spring flower exhibition in the park and the greenhouses of the castle of Grand Bigard (Groot-Bijgaarden) offers an unforgettable flower experience. The park of 14 hectares incorporates nearly all spring bulb varieties. For the new flowering time, the gardeners of the castle have planted by hand more than one million bulbs. Special attention goes to the tulips, with almost 400 varieties, hyacinths and daffodils are also well represented. Read more here

This weekend we had a weather just like out of a fairy tail ! It was nearly summer temperature and at one time the thermometer rose to 25° !! Very unusual for April.

Each year there is the "Floralia Brussels" in the park of the castle "Chateau de Grand Bigard" I had always missed it for I don't remember what reason, but this year I went. It was the second day of the opening and it was just beautiful. 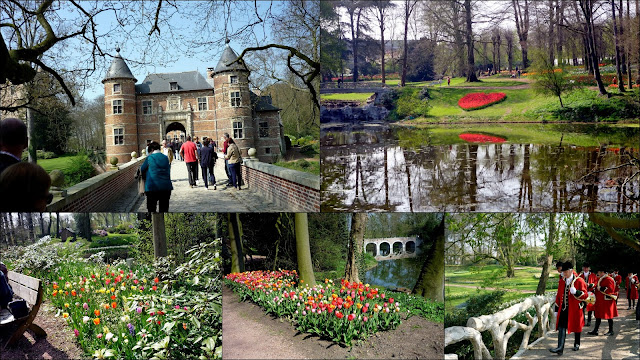 After my two hours I sat down and chatted a bit with the other people, before I returned home, rather exhausted. I will write an special post about this beautiful exhibition. 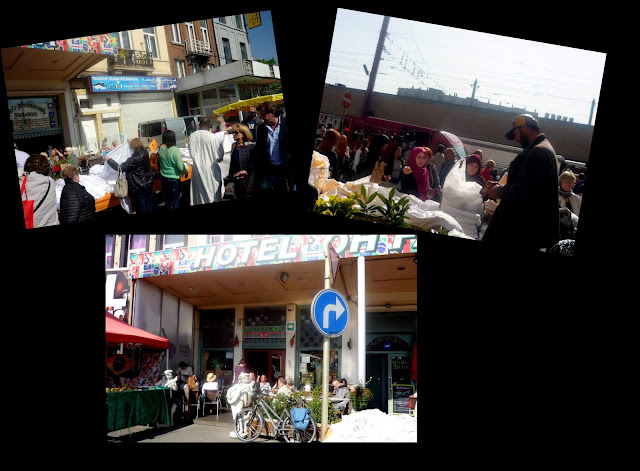 It hadn't been on the Brussels' Midi Market since a very long time, and decided to go there and maybe make a bargain. And I did ! I found two bathing suits Italian models, very chic and very cheap !

I also bought a bag because I had forgotten mine at home and a roasted chicken with vegetables. Once home I put the chicken quickly in a cupboard, because of my house thief, cat Arthur. 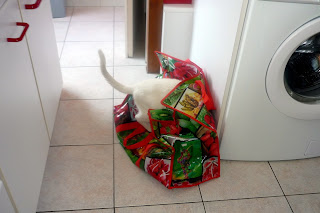 But he smelled the chicken in the bag and desperately climbed in the bag to check if there was not at least a crumb of chicken left ! He got part of it from Mr. G. of course in the evening.

We finished this nice weekend at the emergency service in our hospital ! Mr. G. scratching his back, had found something strange which he couldn't see and showed it to me. I am not quickly impressed by bloody injuries, but what I saw here I had never seen in my life. Part of his back was fire red and covered with black blisters ! I thought he had the pest which of course was nonsense. Anyway as it looked so horrible I drove him to the hospital although he felt nothing, no itches, no pain. There the doctor told him that he had the shingles  ! He has to take antibiotics and I have to disinfect his back. Strange is that it doesn't bother him at all. Besides the fact that he is very tired he has no other symptoms.

This ended our weekend the chicken was very good and Arthur happy !
Posted by Gattina at 09:31 5 comments: