HOW TO BE A GOOD JOURNALIST

Sitting in front of my screen I thought if I would be a journalist and had to write everyday something for a newspaper what would I write if I had just nothing to write ?? For reporters of daily news there is no problem at all. There are every day catastrophes, wars, people killed or kidnapped, that's a very easy job. But the poor journalist who has to write about people what should he write when nothing has happened ??

That really is a big problem but can easily be solved. For example you see Camilla looking a little fat, you write "Camilla pregnant ??" and knit a story around how amazing it is that at 60 she is now expecting a new heir to the throne and the next day you ask the population in which position would then be the other members of the family. After that you can write that it was an error and that her butler was wrong. Or you take the poor Elvis and pretend you had seen him just yesterday on the street eating fish and chips with mayo and that he lives now in Scotland ! Not only Scotland will be very thankful to you because the Tourist Office will have a lot of work, Hotel rooms will be booked and the whole economy increase. Your newspaper will have an enormous sales increase and everybody will be happy. Nobody cares that poor Elvis is still in his grave in Graceland.

There are such a lot of things to write about with a little phantasy and that is also why these papers never run out of subjects.

But I am not a journalst not even a reporter and instead of inventing that I winned a "certain" amount in the lotery and would tell you tomorrow what I intend to do with it (to have another subject for tomorrow) I found something very interesting on my friend and compatriote Sanni's blog ! 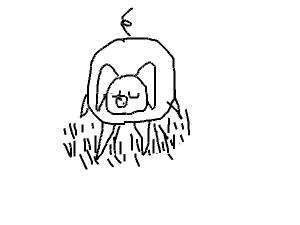 And the pig said :

You drew the pig:

Toward the middle, you are a realist.

Facing front, you are direct, enjoy playing devil's advocate and neither fear nor avoid discussions.

With few details, you are emotional and naive, they care little for details and are a risk-taker.

With 4 legs showing, they are secure, stubborn, and stick to their ideals.

The size of the ears indicates how good a listener you are.
The bigger the better. You drew large ears, you are a great listener!

The length of the tail indicates the quality of your sex life.
And again more is better! You drew medium sized tail (only because I didn't have any room left on the top !!!)

And if you also want to know more about you thanks to a pig, just go here.

Don't forget that tomorrow I will take the Cyber Cruise to the North East coast of the UK ! To become member contact our captain Mrs. Lifecruiser.
Posted by Gattina at 07:19 10 comments: 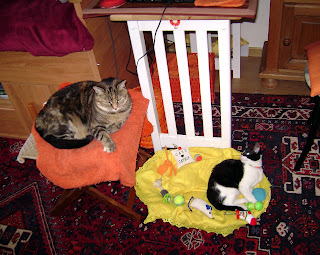 Pookie and Rosie awaiting guests
Appetizer
Describe your laundry routine. Do you have a certain day when you do it all, or do you just wash whatever you need for the next day?

Soup
In your opinion, what age will you be when you’ll consider yourself to truly be old?

I don't know at what age I am laying peacefully in my coffin with folded hands and closed eyes. Then I would say I am old.

Salad
What is one of your goals? Is it short-term, long-term, or both?

The only goal I have long or short term is to enjoy life !

Nothing can surprise me anymore, not even if ET is ringing at my door, or wings are growing on Bush's back !

Dessert
On a scale of 1-10 with 10 being highest, how happy are you today? 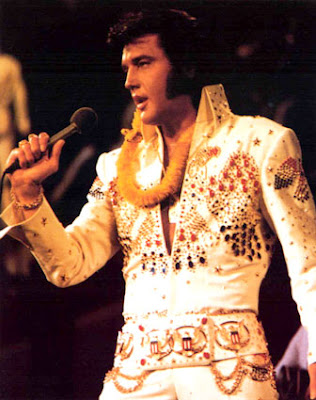 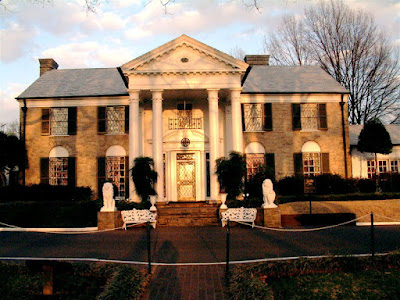 2. I was very disappointed when I saw the house. Instead of a big mansion as it looks like on pictures, it was only a normal house with 4 colons added, I found it rather small

3. We had to quew up and take a bus to Graceland not more then 10 people at the same time

4. Inside it seemed to me to be in a red plush atmosphere. There was a living room dominated by red velvet, and a rather small kitchen.

5. The stairs leading to the bedrooms were blocked. In a room costumes of Elvis and the wedding dress of Priscilla were exposed

6. I found him very short according to the suits he mustn't have been bigger then me.

7. Downstairs in the basement there it became really big.

8. There was a shooting gallery where he excersised, a huge TV room with about 10 TVs and a seat all around the wall. Apparently he loved to watch several programs at one time and when he didn't like it, he just shot in the TV. 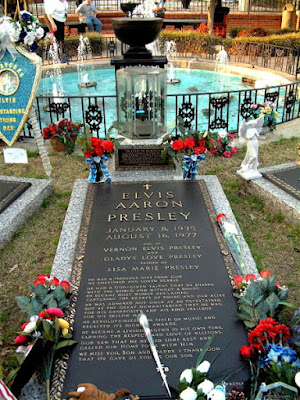 9. In the garden was his grave where still people (mostly women) were moarning. Besides were the graves of father, and mother.

10. Nearby was his private airplane. Inside it looked furnished like a comfy appartment and in the bedroom was a huge double bed with a safety belt. That impressed me the most !

11. There also was his Bus with which he went on tour. Very comfy too

12. In front of the house stood the pink Cadillac the first car he had offered to his mum.

13. After the tour we found ourselves amongst a lot of souvenir shops. From boutons till plates you could find everything. I bought a little Graceland in plaster

Although I had never been a real Elvis fan I loved his voice and songs and he is part of my youth.. 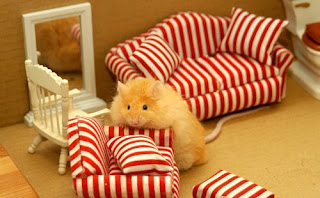 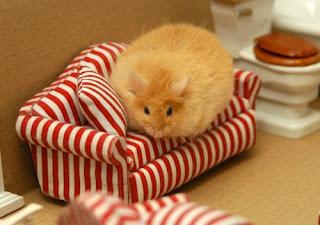 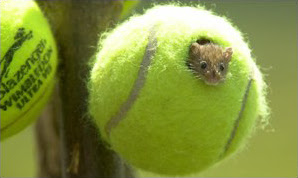 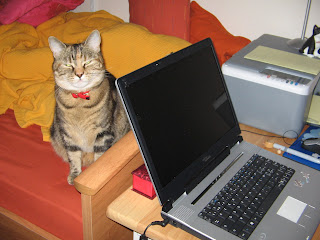 Pookie prepares compiled news
There is nothing to do, the Royals are keeping quiet. No scandal, no marriage not even a little funeral strictly nothing ! It is a shame I am getting bored. But I found something a little royal :
A Briton living in New Zealand in an old car, has denied he is missing aristocrat Lord Lucan. The 7th Earl of Lucan has disappeared in 1974. But I am sure that he is the missed Lord because this man lives together with a goat named Camilla and who else could name his goat Camilla than a Lord ???

Lyrics sung by Pearl Jam Pink Floyd criticising President George W Bush have been censored during a webcast, telecoms company AT&T has acknowledged. He only sung "George Bush, leave this world alone" and I agree fully with him. Would be an excellent idea.

And that was it for the rubric people.

But this is interesting too ! A French teenager is suspected of posting his own complete translation of the latest Harry Potter book on the internet and has been arrested. The poor official Harry Potter translator Jean-Francois Menard, said he is still working on the translation. Instead of putting this translation genius in jail, they should let him help the official translator ! Maybe then the poor Frenchs could also read the book !

Unofficial translations have also been posted by fans in other countries, including China, where publishers fear it could lead to counterfeit books in a country where piracy is rife. Only advice I can give them : Translate quicker !

A man discovered a rare breed of Double-Nosed Andean tiger hound, which has two noses, on a recent trip to Bolivia. This breed could be used for sniffing narcotics because they have an enhanced sense of smell. Poor drug dealers if they have now to deal with double nosed dogs !

Emergency workers are hunting a crocodile which has escaped from a travelling circus in southern Ukraine. So far he hasn't attacked anybody although it would have a lot to eat because Ukrainians are very fat as I could notice during my holidays in Egypt. They should watch their XXXL bottoms when they swim.

And here are good news ! A pizza producer invented an anti-wrinkle Pizza named "Primula" in Salerno (South Italy) The Italian Newspaper La Stampa even pretended that this anti-age Pizza has been very much appreciated by 80 year old Pope Benedict XVI who had tasted it. Honestly even the best Pizza would make him look like an Adonis there would be a lot of plastic surgery necessary !

And then I read that a 73 year old grandmother and her grandson had been arrested in Italy (again !) because she had 4 kgs heroin worth about 1 mill € in her possession, hidden behind rolls and eggs in Grandma's room. They also found two guns in her wardrobe ! Dangerous grandma ! She sat friendly smiling in her window as a lot of old woman do, and waited for her grandson to give him small portions of the drugs so he could sell it to clients ! I will be careful in the future if I see an old Lady sitting in a window ! 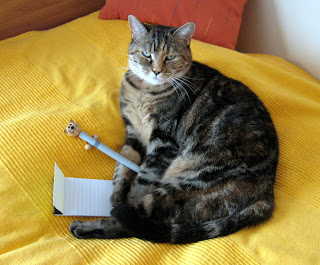 When I came back yesterday from my holidays in the UK, the train I had to take to join the Eurostar was air conditionned and freezing cold. But outside it was very hot. Result, today I have a dropping nose ! That's what I brought back as a souvenir ! So when I saw the word "drop" today for MANIC MONDAY I only could think of the following story, as I haven't dropped away, back, behind, or dead, besides my dropping nose I am very well alive ! Nobody dropped in or out today but I dropped off watching Mr. Monk at TV !

My aunt used to work as a switchboard operator in the 40th when everybody calling had to go through an operator. Sometimes she listened to the conversations when she had time and it seemed interesting, after all she was a woman. But what she heard once on a peaceful afternoon was smashing ! A male voice said that he probably should put more drops in his wife's food, because she still hadn't passed away ! On that a female voice answered that he should give her more drops ! My aunt was first so dazzled that she thought she had misunderstood but listening to the rest of the conversation she was sure that there was a man who intended to murder his wife. She alerted the police who checked on this nice couple and could safe the wife's life in the last minute !

Now it's enough, a drop from my nose just dropped on the keyboard ! 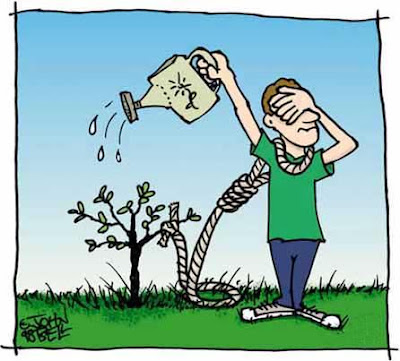