1. As usual the week started with aqua gym in the morning. Afternoon I went to visit Ilona's mother as she was there too. When I came back it poured that much that when I opened the garage door I saw that the garage was flooded. I called Mr. G to clean the drain filled with rotten leaves so that the water couldn't run through and had arrived in our garage. Grumbling he knelt and took out a packet of leaves and then we both pushed quiet an amount of water outside. Next time hopefully he checks the drain regularly as he does usually but now in vintage age he had forgotten.

2. As I am taking Ryan Air to fly to Marseille on Sunday and the luggage is very limited, I thought I sent a gift which was rather heavy by post. What a good idea ! First I had to choose amongst various models the right box which was flat and unfolded. Then I had a battle with the box to get it together, finally I gave up and went to the responsible employee and asked him to make a box out of this flat carton. I must have looked so innocent and stupid that he did it. I only had to write the address and pay. But when he announced me the amount I was flabbergasted it was exactly the amount I had to pay for more luggage on the plane ! 15 € (20 $) !! I could have taken more with me in my luggage ! I was really angry and it told me a lesson, never send something by post again next time I pay for more luggage !

3. I started to prepare my paintings for our yearly exhibition that meant that I had to nail a string to hang them up. It went quiet well and my fingers survived the hammer. As I am in charge of the decoration too, I looked through what I had from last year and also bought some new items, like a little buddha , birds, shells and stones.

4. The weather was awful and I avoided to go out, although I like to drive around with my new car. But I didn't want to catch a cold just before my trip to France. I prepared some scheduled posts. In the afternoon I had a battle with the car insurance there was something wrong. It takes hours on the phone to get the right person. It starts with : for Flemish dial 1 for French dial 2 for German dial 3, for English dial 4 then after pushing on button 2 I heard if it concerns ....push 1 if it concerns .... push 2 etc. finally I got the message that all lines are busy and had to listen to an awful music until finally I got somebody who felt concerned. It was exhausting !

I spent the whole morning sorting out pictures and put them together on the billboards and checked that they had the right distance and were not hanging crooked. It was quiet hard work because we have less and less men who are still able to carry heavy things. Or they passed away or they have backaches.  Fortunately one husband was very efficient and finally it was all done. This year I have only one painting with a cat, the others are my trials with modern art ! At noon we finally had finished, tomorrow we will do the decoration and on Saturday the Exhibition starts with a vernissage at 11 am.
Posted by Gattina at 06:00 11 comments:

The word vintage is more and more in fashion everywhere. Vintage markets are organized, Vintage shops, opened, vintage items from cups to cars you can find nearly everywhere. Even Vintage Hotels are opened.

The word vintage originally only referred to wine, so says the dictionary :

But now it also has another meaning.Vintage are old things !

Each time I see vintage items they remind me my youth. All these items people are after and buy now I had when I was a teenager and in my twenties. When I went to an exhibition "The-golden-sixties", I realized that I am a vintage now too. I was young and followed the fashion now called vintage. Most of my blogfriends are more then a double or triple 20th, they are vintages too. So I decided not to be a senior lady or an old woman anymore, but rather a vintage lady.

I tried out my new title when I bought a "Senior ticket" for an exhibition. I just asked for a "Vintage ticket". The poor girl behind the desk made big eyes and didn't get it immediately, but then she laughed and said, "that's a very good expression, here is your "vintage ticket". Ever since I don't ask for Senior services or reductions anymore, I ask for vintage. I think it sounds much better and nobody can deny that it is the truth. We belong to the "vintage" time which we had lived life. We had the clothes, the cars, the furniture which people buy today for a rather expensive price. If only I hadn't thrown away all my clothes, furniture, radios etc, I could sell them today for good money and become rich. But at that time it was old junk and not vintage at all. I must admit that if you ask for a vintage ticket to go to the cinema or theatre, it first takes some time until people get the meaning, but then they all find it very nice. It takes a little longer if you ask an employee in the social services or administrations. Their brain is rather slow and bonded to the usual words. But even they get it after a little while. Administrations have always worked in "snail" mode.

Therefore my dear friends remember you are not old, you are not a senior, you are a Vintage Lady ! (This counts of course for men too !) 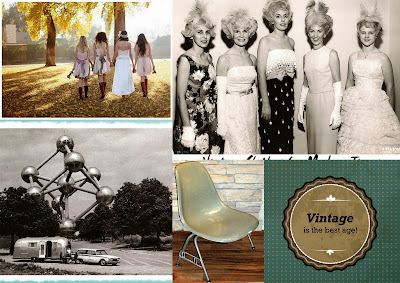 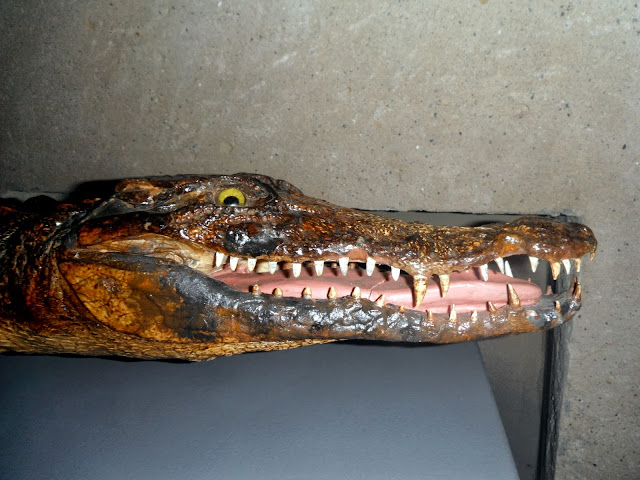 Spending some holidays in Thonon (France) one day when the weather was not so good, we visited the
Ripaille castle, which is located between Thonon and Evian on the banks of Lake Geneva. It is one of the most notable places of history, nature and beauty in the Haute-Savoie. Read more here ....
Posted by Gattina at 06:00 No comments:

MY WEEKEND OF OCTOBER 12

We have celebrated our 44th wedding anniversary, with a nice plate of Sushis as supper and a fruit cake as dessert. Nothing special, as we both considered that a new car was enough for an anniversary gift. We condoled each other to have "suffered" together for so many years. 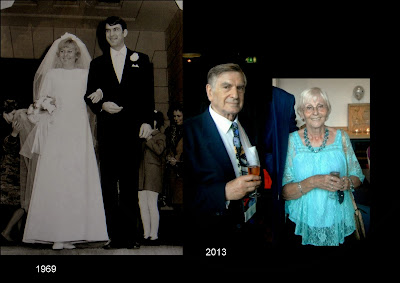 as you can see.

The theatre season has started and we had our first play. We are four to have taken a season ticket. My friends Nicole, Dominique and my other neighbor Vivienne. As I am blind like a mole when I have to drive in the dark, I suggested to take my car and with the help of Madame GPS I hoped to find the way back when it was dark. I just wanted to get used to drive in the dark as the dayslight becomes shorter and shorter. As Dominique has the same car, she could always replace me on the way back. 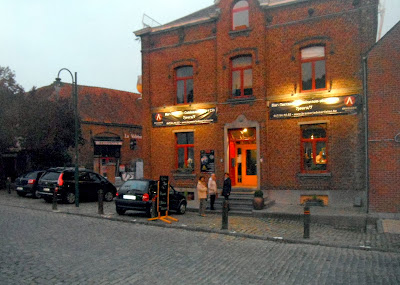 We first went to the restaurant which is part of the old farm which had been transformed into a theatre, and also has a reception room for weddings and other celebrations. After a nice meal we watched the play and it was so funny ! There were only two actors, but they did a great job. The theatre was full, they even had to add some chairs. Still laughing we returned to my car and I managed to drive home without any problem. I just followed the little car on the streets shown on the GPS screen. So even when I didn't see the road, I knew when I had to turn. I was very proud of myself.

Unfortunately like so often the weekends are rainy but I had to go to the Brussels' midi market to buy a few gifts and also of course meet my cigarette supplier.I quickly bought what I had to buy, it rained and the wind was so strong that stand owners started to dismantle their stands because everything blew away.

At the bus stop I met a quiet posh looking lady in late vintage age (old and elderly doesn't sound so good)
In no time I knew her whole life. I must have a face like a confessor. Divorced, 3 children, 1 grandchild and nobody visits her. She is in love with a married man, which I found quiet exceptional as married men usually are not looking for vintage women, but rather young flesh, as they have already a vintage at home. Poor lady waited for nothing because he didn't show up what he was supposed to do. I gave her an advice to rather go out with girlfriends and not bother with men anymore at our age (I pointed out our). But she told me that she would wait for the next bus which was in two hours, to see if he would come. I climbed in the bus and thought that age doesn't protect you from stupidity. 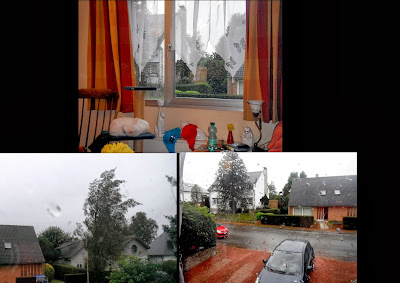 The rest of the day we spent at home with the heating on while it stormed outside. That's a view out of my window. Arthur doesn't bother, he sleeps close to the radiator.

My friend Anne from the UK skyped me apparently they have the same kind of weather and she showed me her new cat. After the last 3 of her 6 cats had died in a short distance, they both swore that they would never take another cat. But one showed up, squatted the garden and then moved in and is now the king of the house. Typical cat !

When I got up this morning and looked at the temperature outside, I couldn't believe it ! From one day to the other we had moved into winter temperatures ! It was only 3° (37 F). I looked at the clothes I had worn yesterday and started freezing, and even more when I opened my blog and saw my profile picture ! 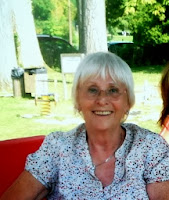 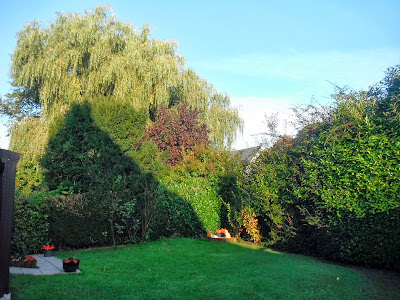 Apparently summer is really gone although the trees around our garden are still green and show now sign of autumn. Strange.

So I started to dress up warm at least in my profile picture and then I will dig out my winter clothes !

Now starts the time I really hate and it makes me angry when everybody says that the leaves on the trees are looking so color and beautiful ! I am blind, I don't see this beauty, I just want to spring right into spring, but my legs are not long enough.

Fortunately I return into warmth of late summer days next Sunday. I am invited by my friend Claudie to spent some holidays at the French Rivera ! Which certainly will give me some energy to go through the short, dark winter days. 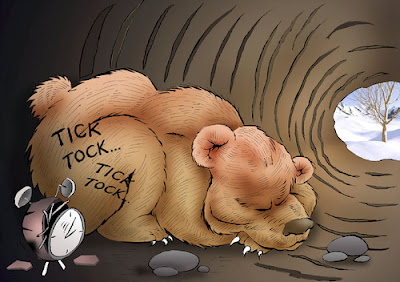 I think that is the best solution after my holidays !
Posted by Gattina at 06:00 6 comments: