1. I still suffered from the cold I had caught in Germany, and couldn't go out at all. I switched from my room to the living room and "suffered" in silence. 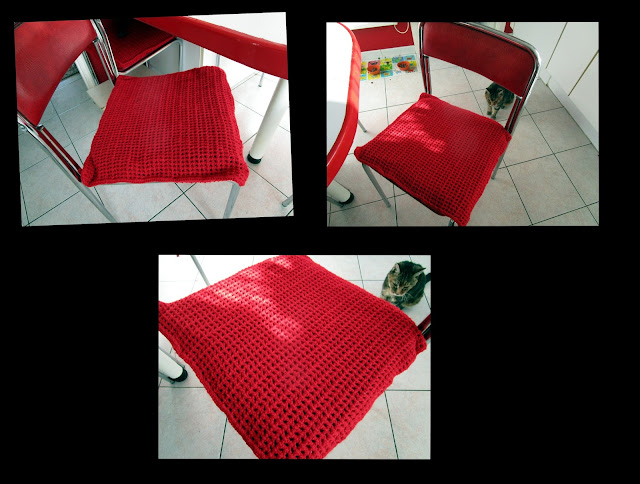 My cleaning lady had crocheted these beautiful covers for my kitchen chairs. The plastic cover had meanwhile some little holes and she certainly thought it needed repair. I was really touched, because she did it just like that without any special reason !

2. We played our weekly scrabble and this time Ilona was the last one. 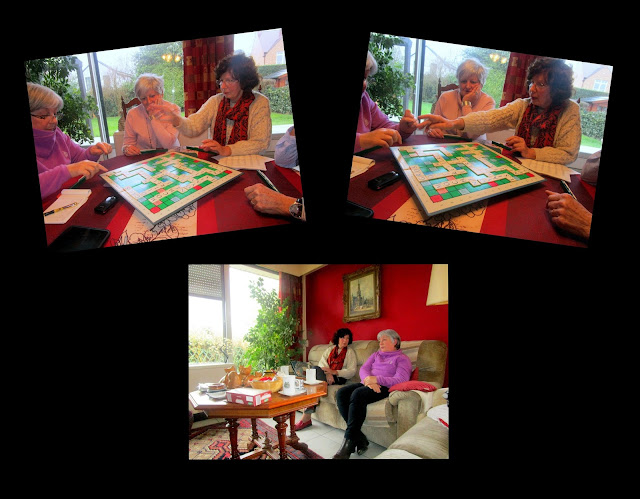 After the first game we had a coffee break and then continued with the second round. While we were concentrated on the game, suddenly a loud snoring filled the room. It was as if an old man snored with all his heart his mouth wide open. Of course it was not an old man, but an not so old dog, Charlie. I never had thought that a dog can snore that loud ! Nicole called him, nothing, those who still could whistle, whistled.  Charlie went on. Finally we shook him a bit and he stopped and continued to sleep without snoring this time.

3.  Mr. Charlie was so happy to come to our house that he first sniffed in all corners and then had suddenly disappeared. My cats were laying in various sofas and beds out of Charlie's view. 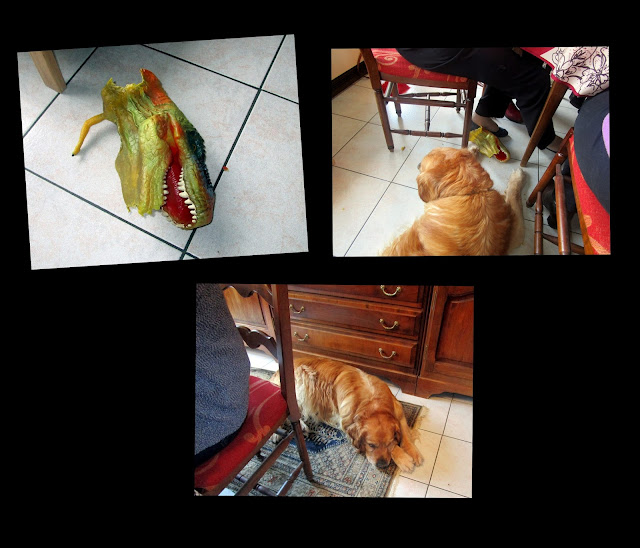 Suddenly he appeared, he had been in the basement and came back with this dinosaur head, which he apparently had found amongst the things to be given away ! He then was busy for a while to pull out all teeth !

This dog is very amusing !

4. The rest of the week I was resting, I felt very weak. As soon as I stood up I thought my legs were out of gum ! Antibiotics make tired ! 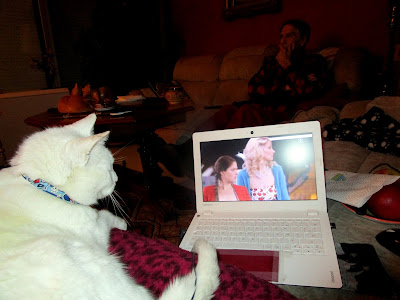 Arthur was my nurse and watched TV  with me ! 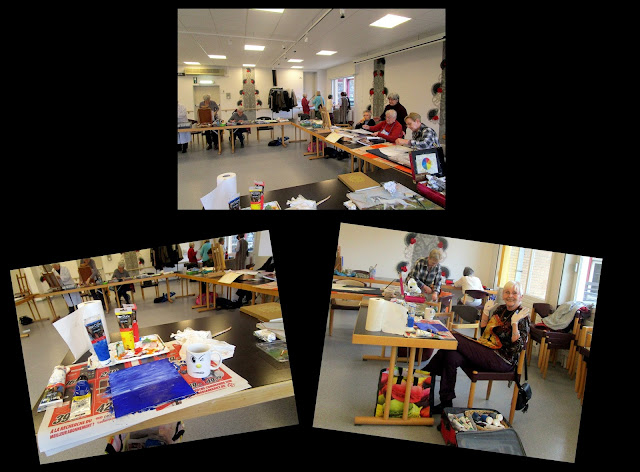 For the first time I went outside but only to my painting course. I just didn't want to miss it. I started a new painting still only with my fingers.

After class I quickly went to choose new glasses I had my eyes checked and my view has dropped a bit. Fortunately I found some very quickly, because  I started to get tired. I just made it home and collapsed on the sofa where I spent the rest of the day !

more participants here at FIVE ON FRIDAY
Posted by Gattina at 06:30 21 comments: 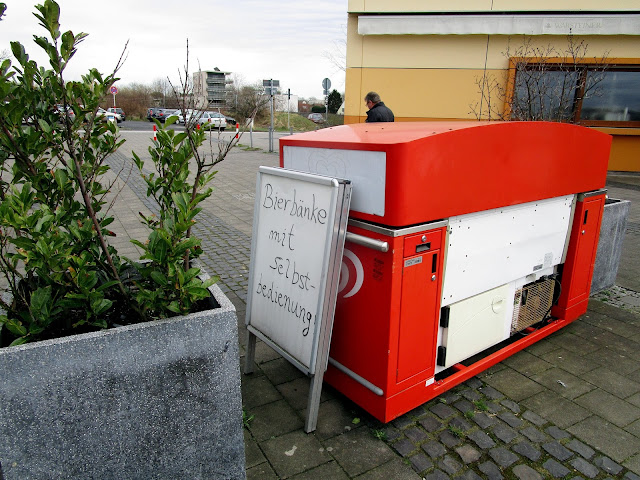 Beer banks with self service (seen in Germany)

2. What's something you find perfectly ridiculous?
Somebody who pretends to be more than he really is. Like people with a huge car in front of the house door and no furniture inside !

3. What's a skill you've developed by way of that old fashioned saying, 'practice makes perfect?
Everything concerning a computer and what you can do with it I learned by myself !

4. What's your idea of a perfect breakfast?
A good strong black coffee with sugar !

5. What's a trip, holiday, vacation, or day outing you've taken that you'd rate a perfect 10? Tell us why.
I have travelled so much in such beautiful areas that it is difficult for me to choose. But I will take one I did 3 years ago. It was a coach trip through the whole UK. From London up to Loch Ness and higher on one side and from Scotland over Wales on the other side. It was perfect !  I have seen such a beautiful landscape and towns !

6. What quote or saying perfectly sums up your life right now? If you can't do perfect, how about one that comes close?
Breathe, it's just a bad day not a bad life ! (I just had a Bronchitis)

7. How would you spend $300 today?
I wouldn't spend it but put it aside for my travel piggy bank

8. Insert your own random thought here.
I think since weeks I have the same thought I wonder when the rain will stop !

When I visited my old schoolfriend from 1951 who lives near Leverkusen, she showed me the surroundings. We couldn't do all we wanted to do because the weather was so bad.

First we stopped at Schloss Morsbroich . 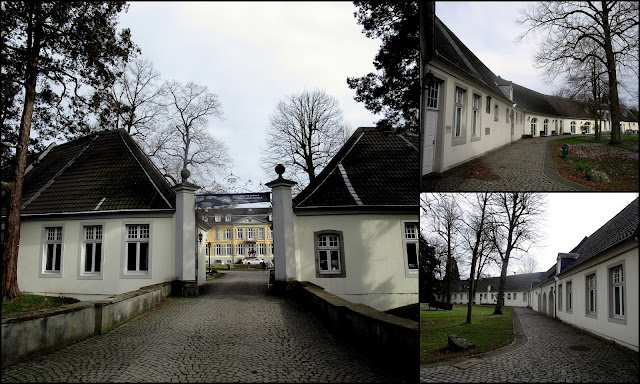 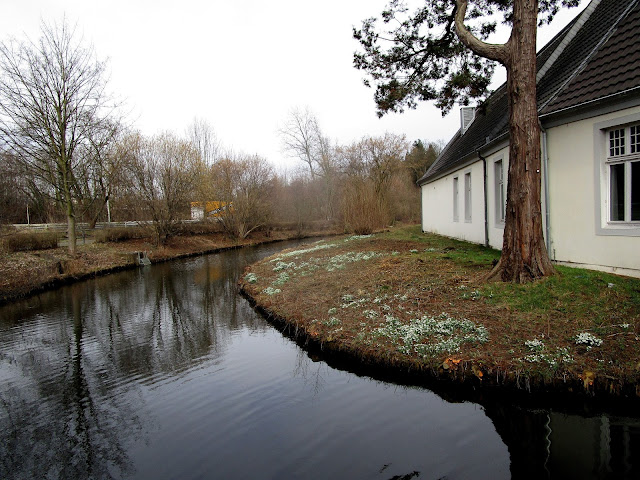 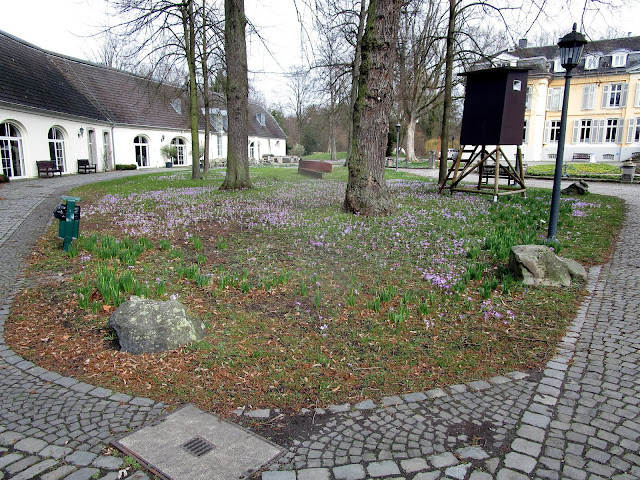 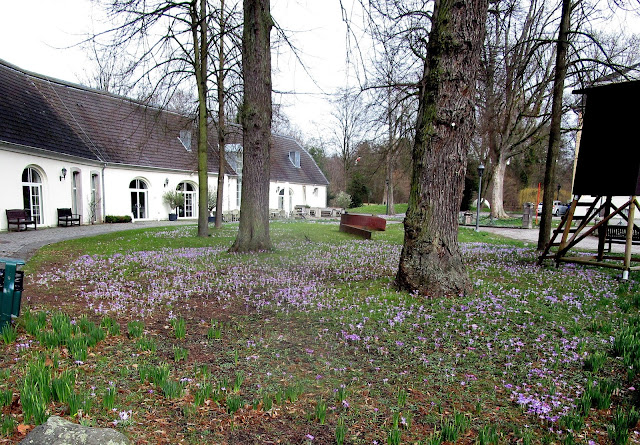 Morsbroich Castle, home to the avant-garde museum, is situated in a vast, well-kept nature park with a sculpture garden. First recorded in 1220, Morsbroich was the seat of the Teutonic Knights from 1619 to 1803. In 1774 Ignaz von Roll demolished the medieval castle and replaced it with a baroque palace. In 1857 Friedrich von Diergardt, a silk manufacture from Viersen, took over the house and added two wings to it in 1885. The city of Leverkusen acquired Morsbroich Castle in 1974. Today, it houses an art museum and a restauran.

Unfortunately it was too windy, and cold, that we couldn't see the garden only a little bit at the entrance where the first spring flowers showed their nose. 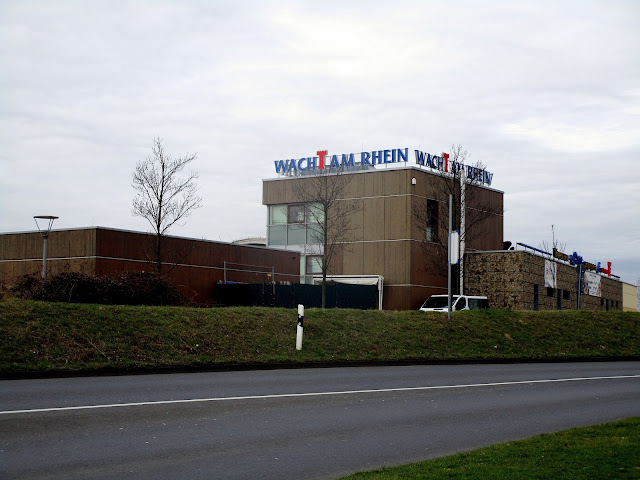 From outside I didn't like the architecture of it. 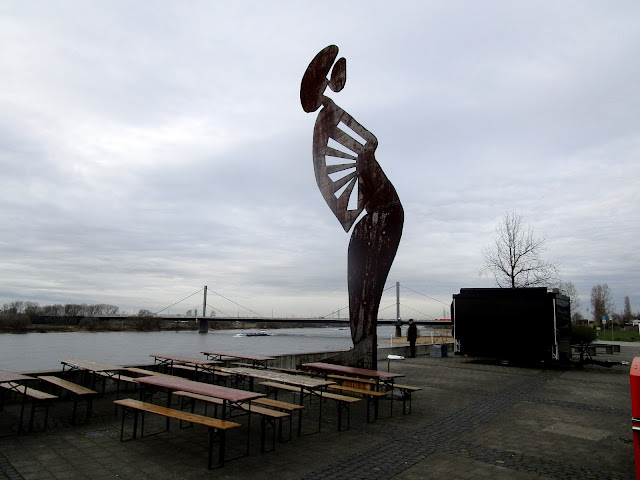 There was a modern sculpture from a famous sculptor, so famous that I don't remember his name. It was out of metal and to me is a question of taste. 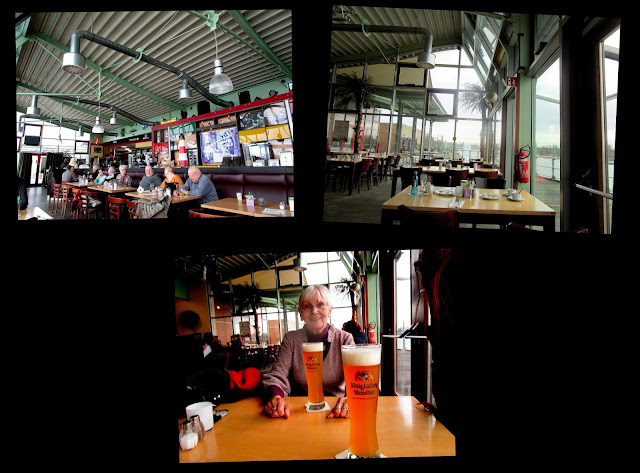 Inside the restaurant was nicely decorated and modern, the food was excellent, they mostly serve local specialities. 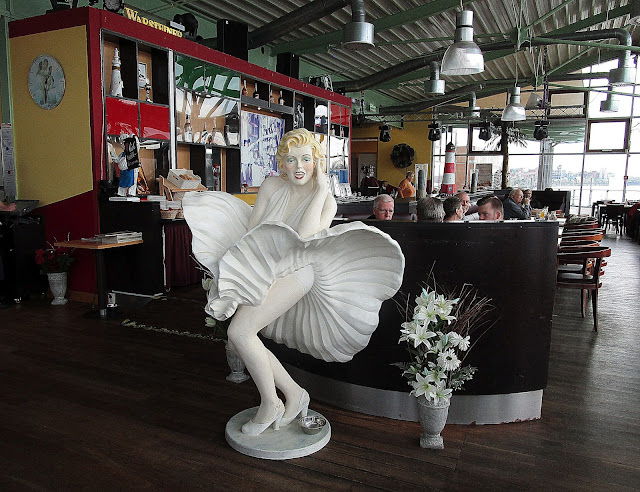 Marilyn greets you at the entrance ! 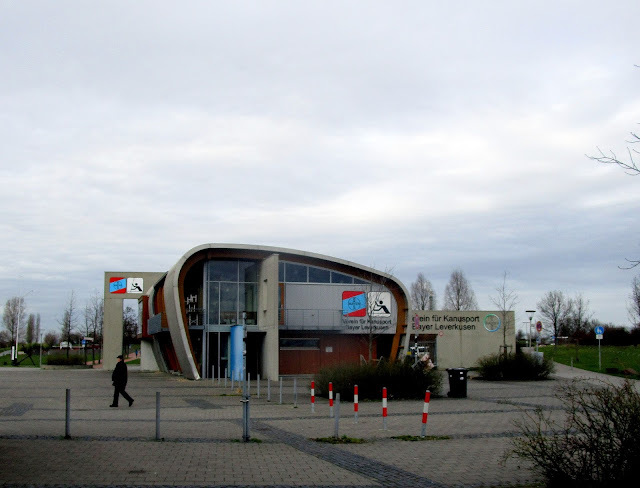 The Bayer Leverkusen company owns most of the area and here was the employees club for canoe and other water sports. 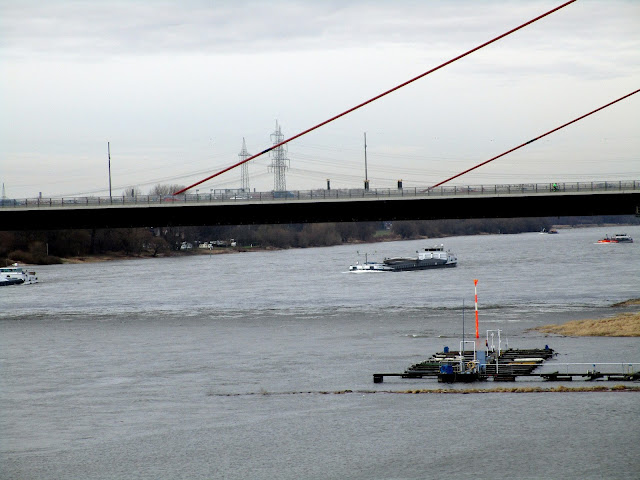 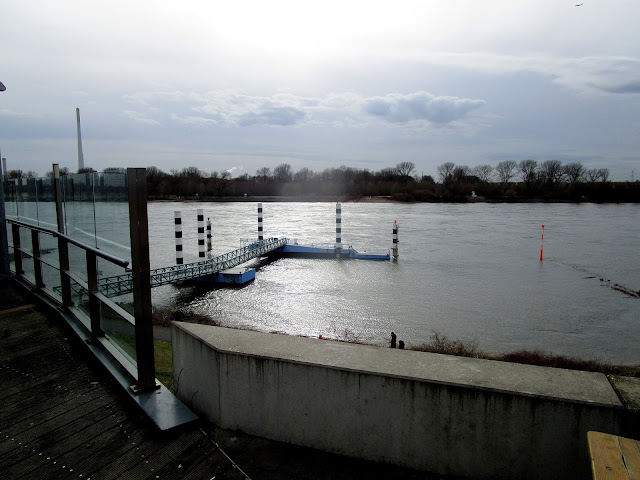 It must be very beautiful there when the weather is nice, there is a lot of traffic on the Rhine.

My friend is living near Leverkusen where Bayer, a multinational chemical, pharmaceutical and life sciences company has its headquarthers. My friend's husband had worked there too, that's why they are living there. I didn't know this area at all only Cologne so she showed me around. 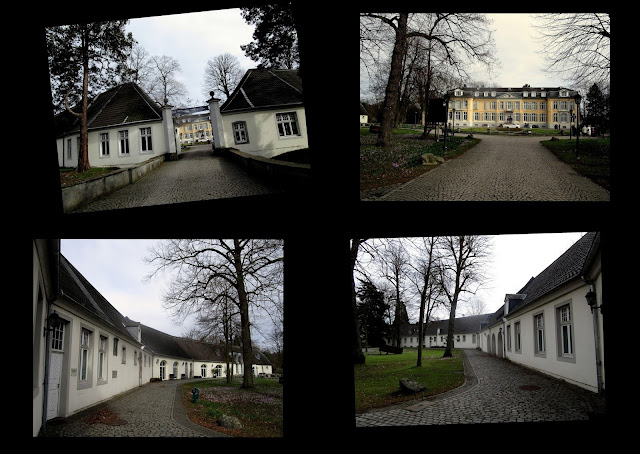 First we saw from outside the Morsbroich Castle formerly a Baroque castle, which is now a municipal museum for the exhibition of modern and contemporary art. It also provides the setting for theatrical productions and other cultural events under the title "Morsbroich Summer". 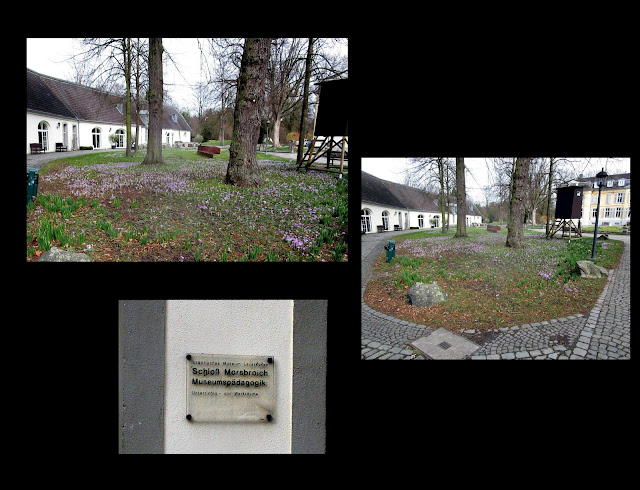 There is also a restaurant inside and when we were there new weds just had their wedding picture taken. A nice background !

Then we went to the "Wacht am Rhein" a very modern restaurant serving typical local German food. 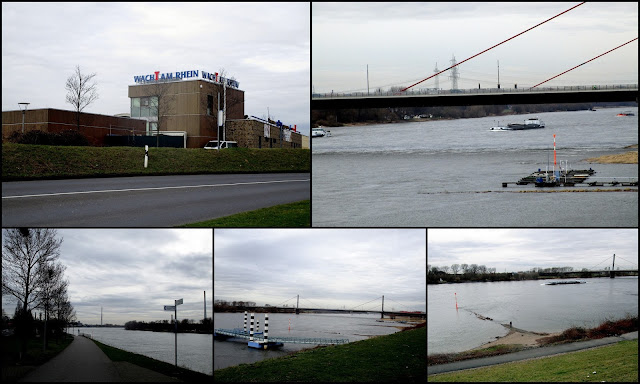 The view over the Rhein is beautiful, unfortunately we had grey and cold weather. It must be very nice in summer. 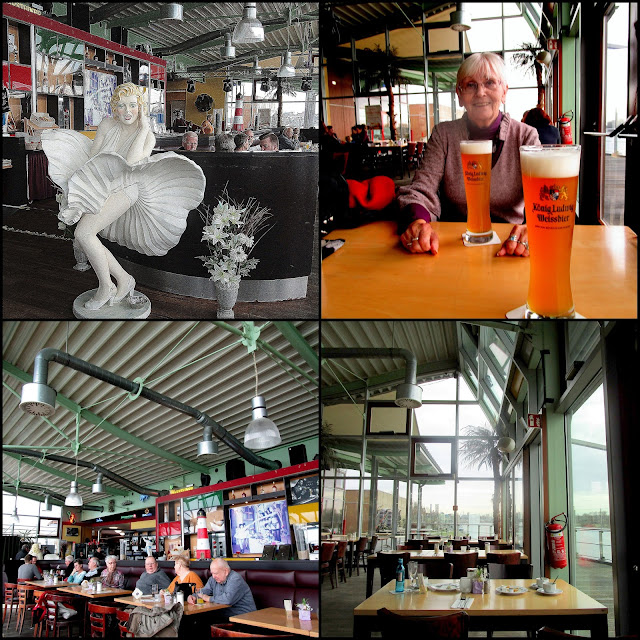 We had lunch there and a huge beer, but alcohol free, there is an unbelievable choice of alcohol free beer in Germany, which is much better than the sweet sodas. I forgot to take a picture of my meal, it was delicious it was an enormous pancake with bacon and onions. 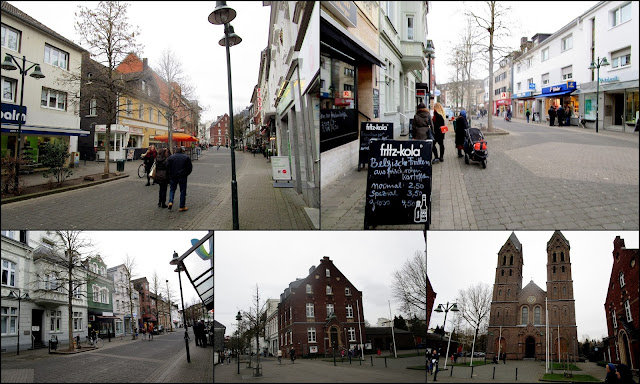 The next little town was Schlebusch which belongs to Leverkusen. It's a nice old little town and certainly worthwhile to be visited when the sun is shining ! I liked the poster "Real Belgian chips", but  didn't try them I was still full from my pancake.

Unfortunately I must have caught a cold when standing in front of the Dom in Cologne when the strong wind whistled around and didn't feel well at all. I decided to drive home before it got worse. What a pity. But I did well, I had no problems and arrived safely home, where I just fell into my bed !
Posted by Gattina at 02:25 9 comments: