1. At the beginning of this week I was still in Southern France. We went to St Cyr sur mer to pick up Claudie's eldest daughter who lives there together with her boyfriend. 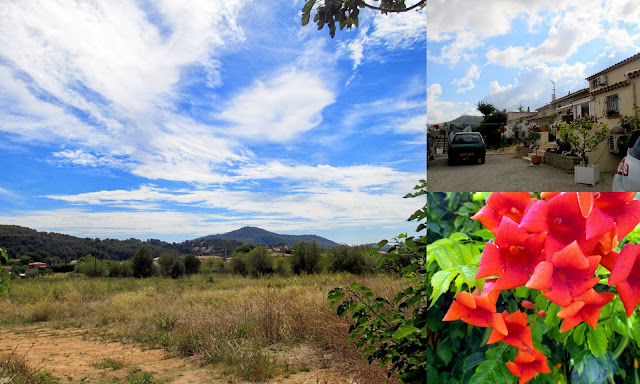 It's a rather romantic place in the middle of nowhere, surrounded by vineyards, fields and beautiful flowers. 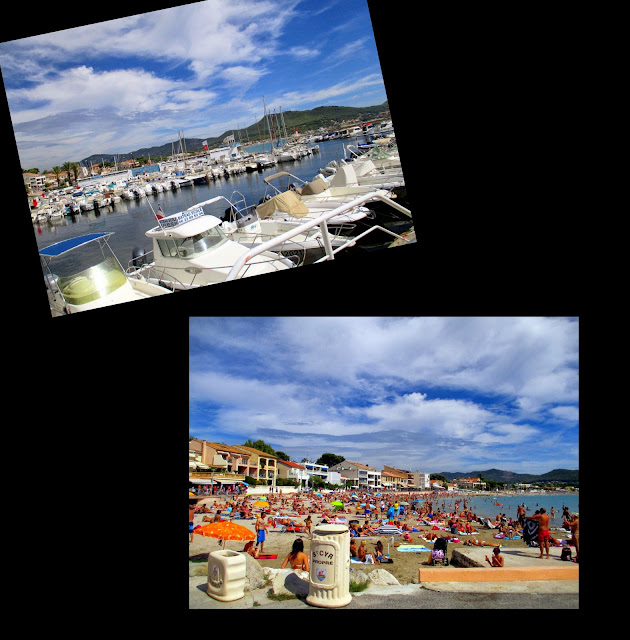 We went to the habour of St. Cyr admired the huge boats and I pitied the tourists on the beach who lay there like sardines in a can, side by side and roasted in the sunshine. 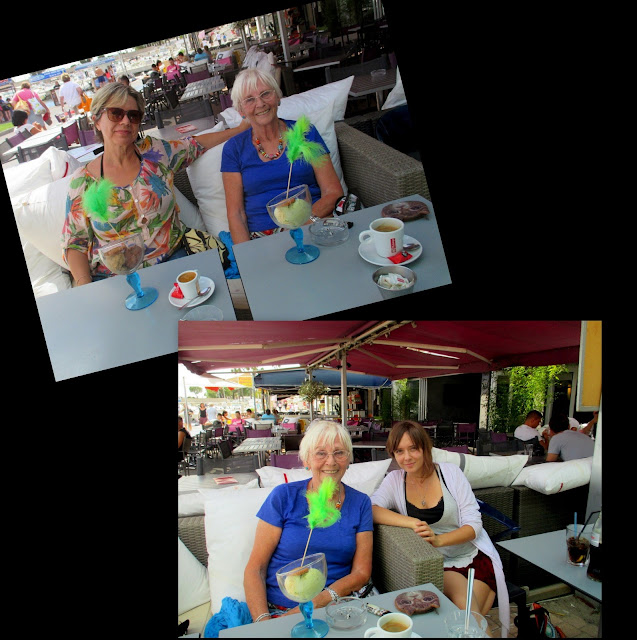 We looked for a nice place to have an ice cream together ! 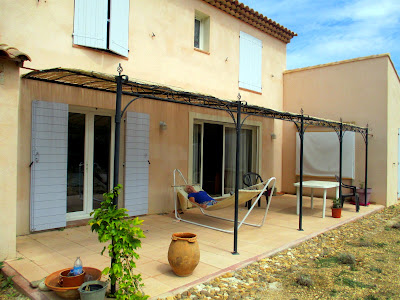 On my last day I enjoyed the sunshine laying on a hammock. First I was a little hesitating to climb on that thing, I thought I would roll over and land on the tiles, but I managed and it was very comfortable ! 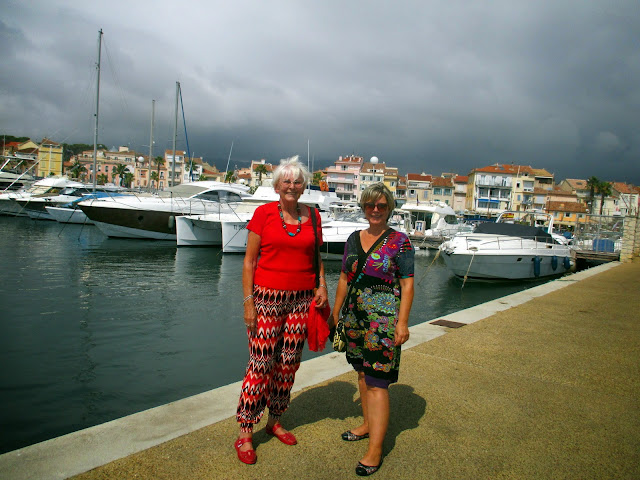 Claudie and I posed in front of the habour of Sanary, which is the closest to Ollioules where Claudie lives. In the evening the whole family gathered for the last meal, (see pictures post below)

4. On our way back there was a terrible smell in our car. It really stank like fertilizer. We closed the window, but it made it only worse. We thought about wearing gas masks, it became unbearable. The mistery was solved when I got out of the car ! I had stepped in dog poo and it was my shoe which smelled so badly ! We bursted out in laughter, I cleaned my shoe as good as I could and the smell was gone !

5. I left France taking the plane in Marseille. It was so hot that I wore just my thin trousers and a light T-shirt. I had some spare trousers and another T-shirt and a thick cardigan left out of my suitcase I knew I would fly into cold weather. At the air-conditioned airport I started dressing for winter ! I put on the other pair of trousers over the once I was wearing and a second T-shirt. In the plane it was so cold that I had to wear my cardigan.

Holidays are finished ! Routine life has me back !
Posted by Gattina at 06:30 8 comments:

Since yesterday I am back from my holidays in the Provence. I stayed with my friends who live there in Ollioules.

Ollioules is a charming little old town dating from the thirteenth and fourteenth centuries and has about 13.000 inhabitants.

Olives, citrus (lemon and orange), fruits and vegetables, are cultivated here, but also saffron, and capers.

In the nineteenth century a new period of prosperity appears with growing flowers. At a time Ollioules was considered as the capital of the flowers. With the arrival of the railway during the Second Empire, the flowers are shipped throughout Europe. 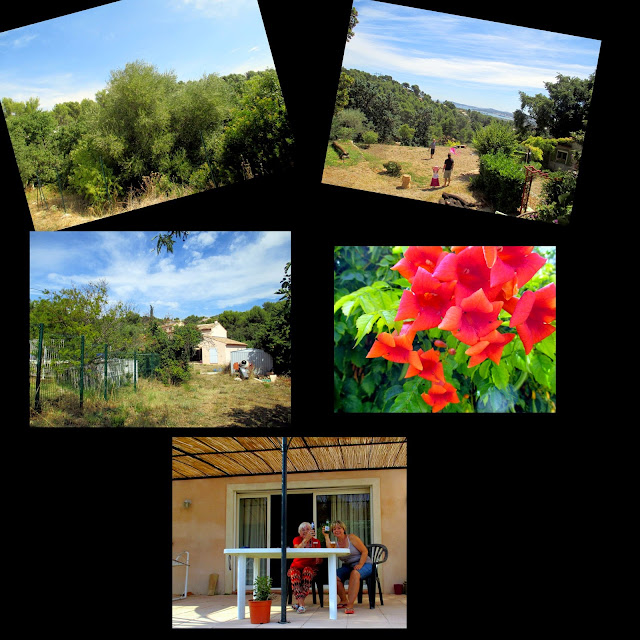 My holiday home and the good bye drink on the terrace 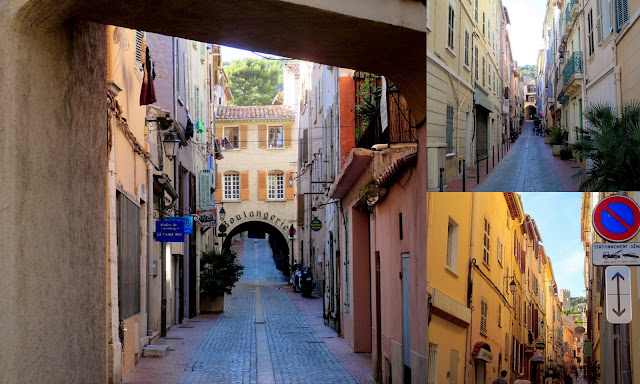 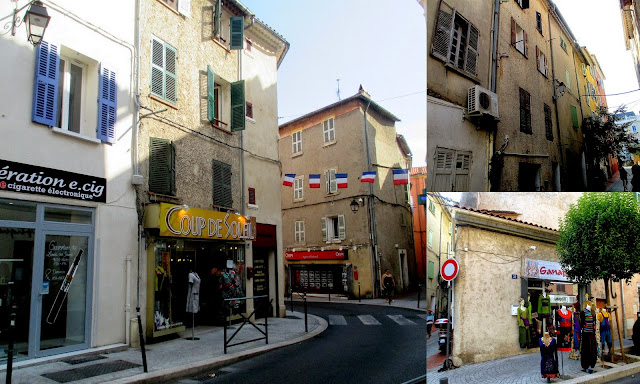 A walk through the narrow streets with cobbled stones. 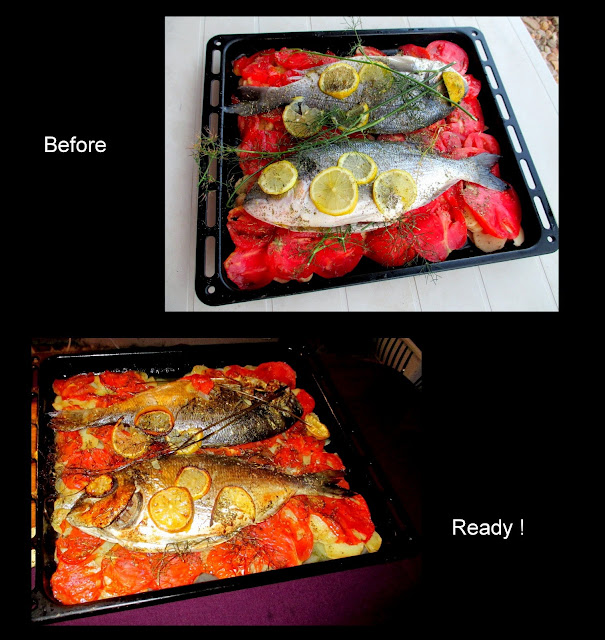 Two sea breams as last supper ! It was delicious. 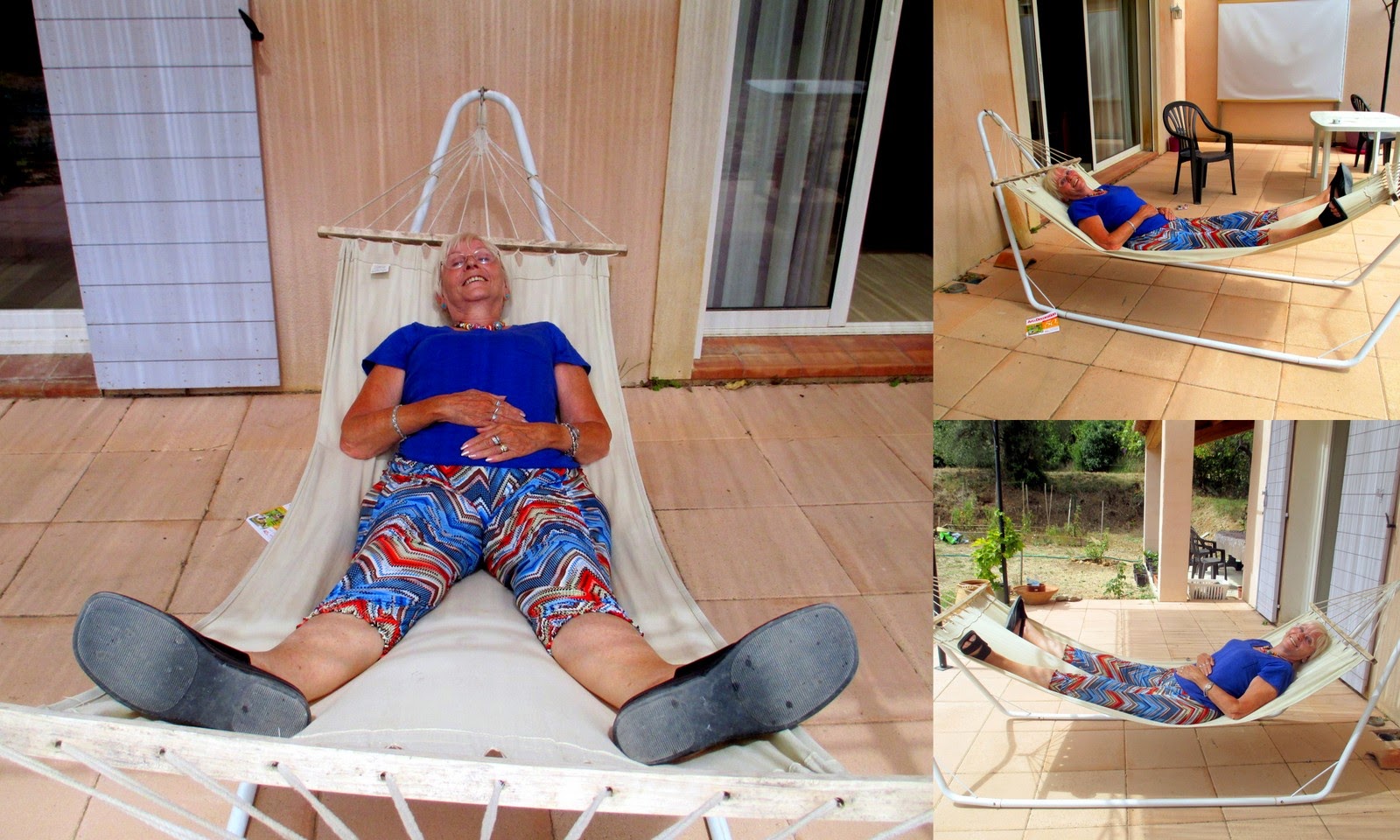 Here is my world for a week ... at the French Riviera 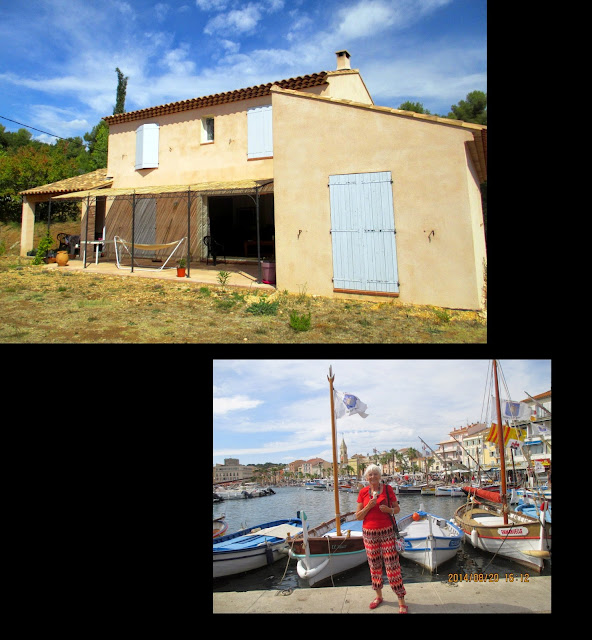 My home and the habour 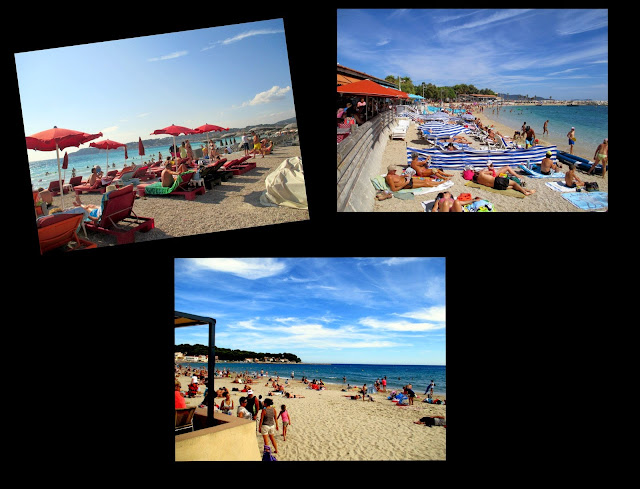 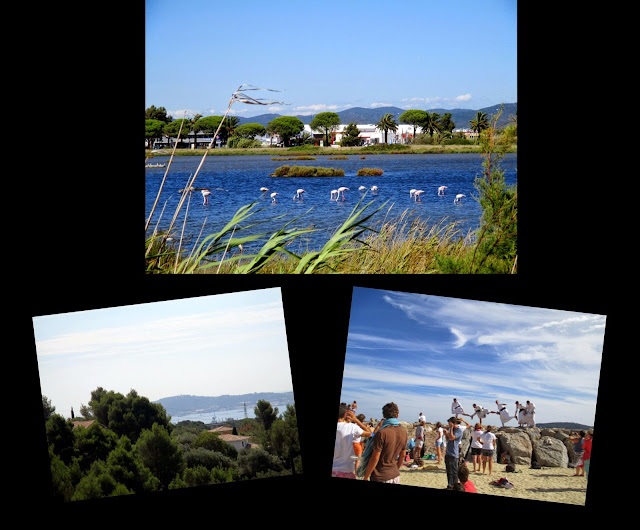 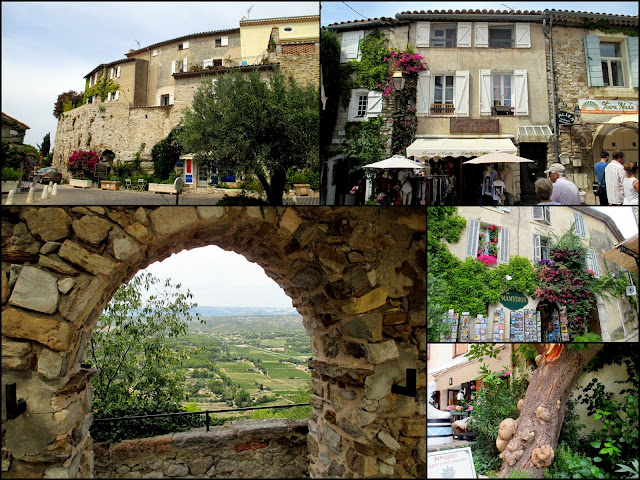 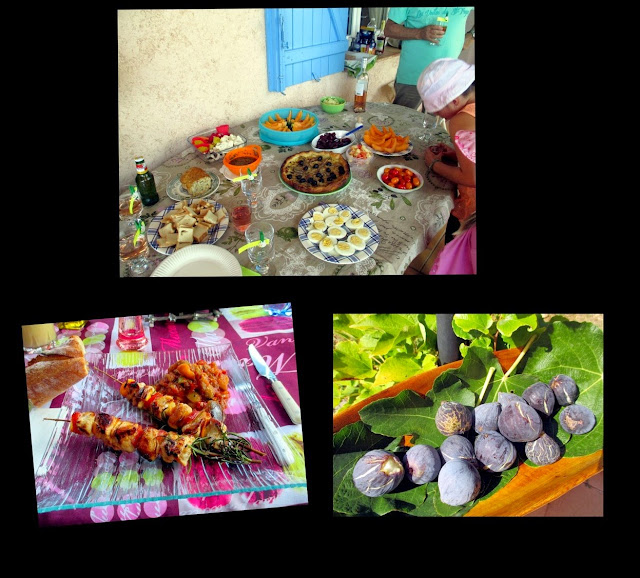 Claudie took me to a place called "Almanar" near Hyères, a seaside resort. It is a very wild landscape, with large beaches and not too many tourists. A paradise for windsurfers too. 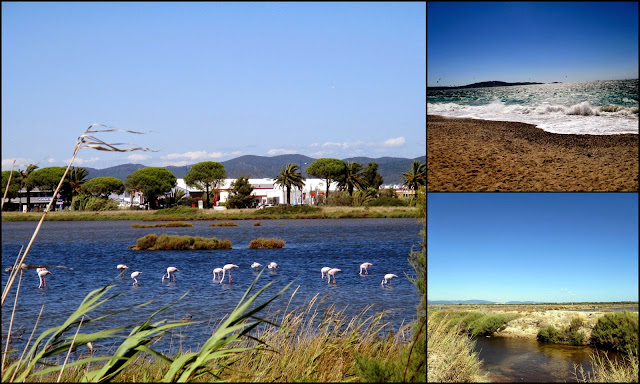 We saw wild flamingos and ancient salt cellars, and I was told that the landscape here looks like the famous Camargue. 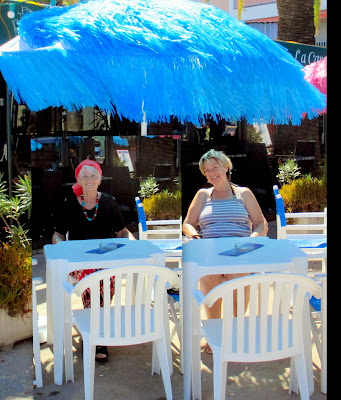 We found a nice place at the harbor and had an ice cream. 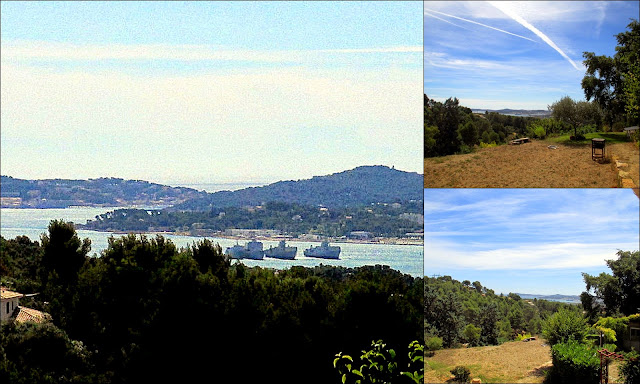 On Sunday Claudie's sister had invited us for a brunch. From her house you have this beautiful view. The warships I only discovered on the photos. Later we even drove by. 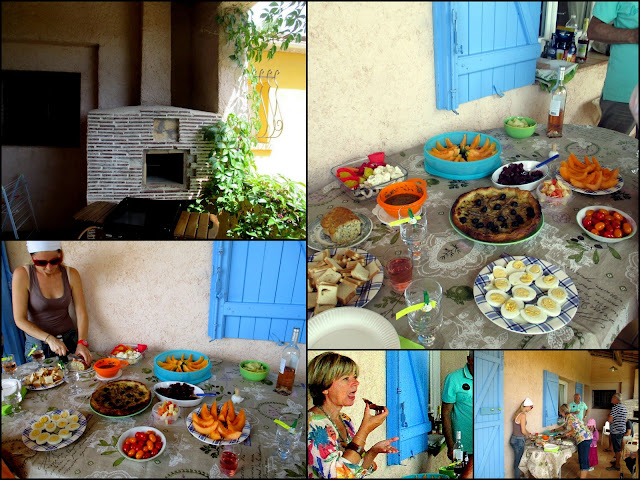 There was an old Pizza stove which the Grandfather had built. On the table was so much food that it would have been enough for a whole army ! We couldn't eat it all, but it was delicious. 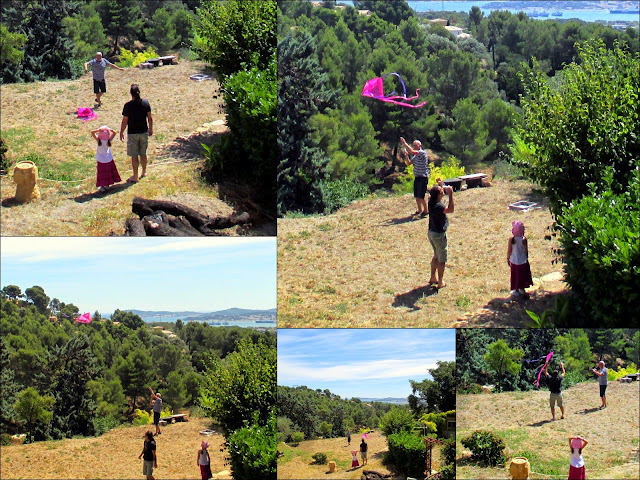 Before the ice cream the men tried to make a kite fly for the two little granddaughters of Claudie's sister.

At 3 pm we returned home and then Claudie took me to another beach called "La Sablette". 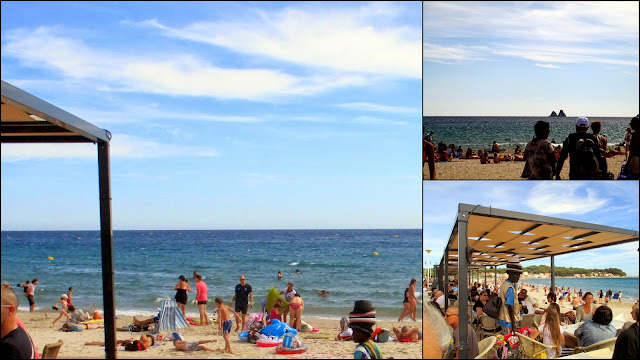 We walked a little along the beach and then had a drink. From far I could see the two rocks called "the brothers".

My holidays continue in wonderful weather, it is warm and my "office" is outside 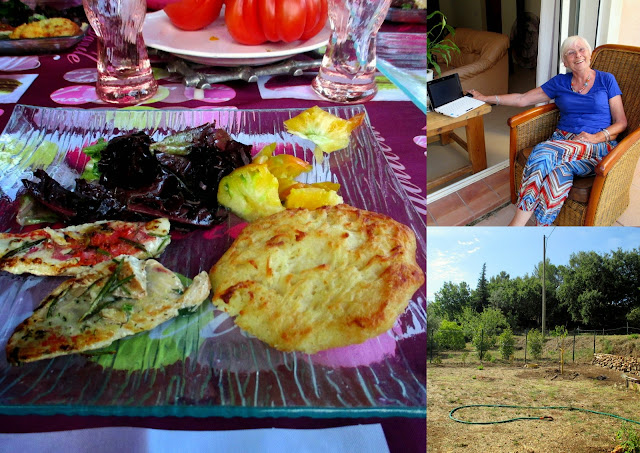 I am spoiled with the delicious food Claudie's husband prepares. He loves cooking. 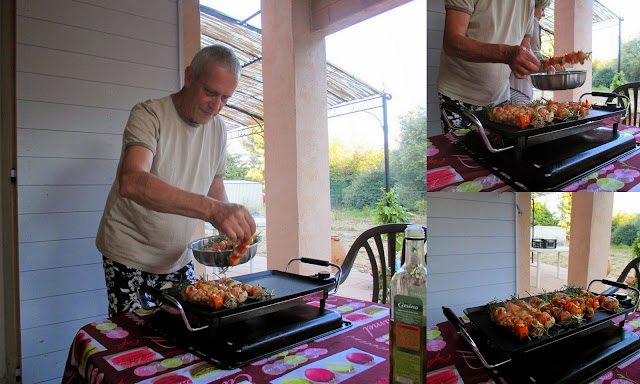 Here he is preparing chicken  brochettes 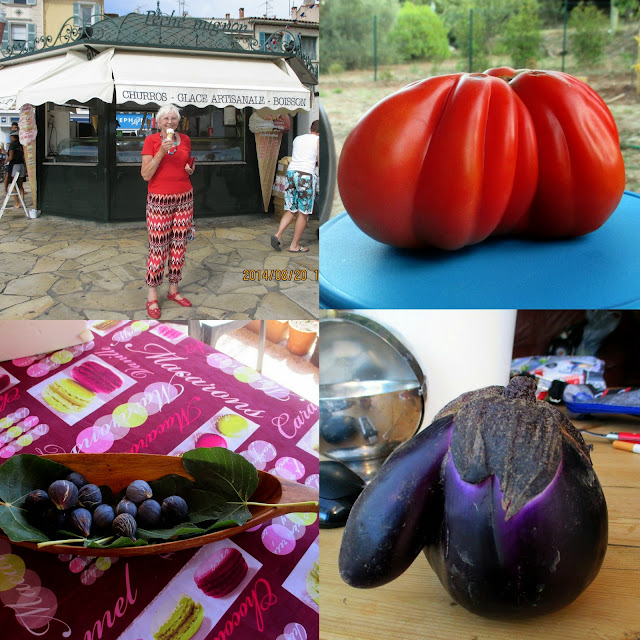 Each day I have an ice cream and the vegetables we eat come from the garden and sometimes they have real funny shapes ! The eggplant looks like a man's head with a huge nose. The figs are growing in abundance you just have to pick them up from the trees. 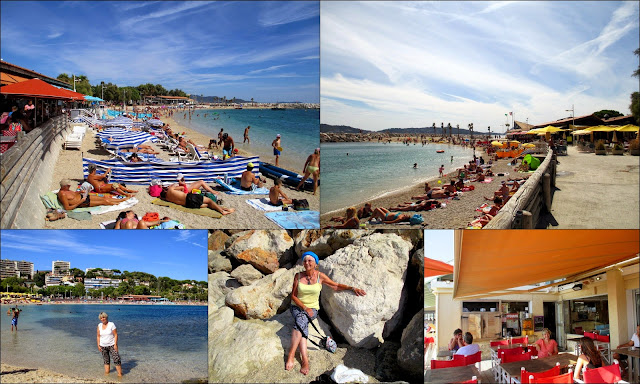 We went along the beach in Toulon and Claudie checked  the water, but it was a little too chilly for our taste ! But at least we could take a nice sunbath and then sit on the terrace of a café to have a drink. 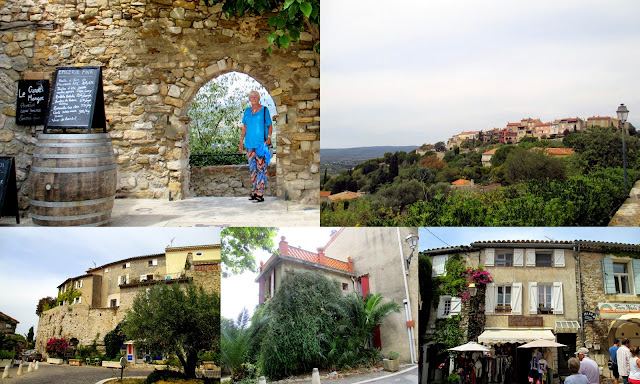 We also went up into the mountains to a charming little village (Castelet) from where we had a beautiful view over the whole landscape.