The summer weather had come back and the week started with a very hot Monday ! It was even so hot that we couldn't sit outside we had to stay inside the curtains closed. Our Scrabble game was cancelled, as Myriam had called that she had a terrible kidney attack which was very painful and that she couldn't come. One was in France to help her brother to move their mom in a retirement home and  C had troubles with her eldest son who was sick ! So Nicole and talked about what wearing when her head would be bald from the chemio therapy and I had found lots of very nice wiggs on Internet. Finally we had a lot of fun with all the wiggs which were on offer and had a nice afternoon. It was the first time her daughter had left her alone to go with her daughter to the sea. This girl is an angel ! As the doctor had said that Nicole could go home if somebody is there 24 hours, her daughter didn't hesitate a second and took mum home. She doesn't work for the moment so she has time but still it does her good to have a break.  I babysitted Nicole with pleasure.

Meanwhile Myriam's condition had worsened and she had to go to hospital. She called her daughter and asked her to drive her to the emergency, but her daughter had guests and no time for her mother !! Finally it was Nicole's daughter, with all the troubles she had with her own mother drove her to the hospital. In the evening I called the hospital and they told me that she was just taken into the operating room !

The next day, she called me at 11 am and asked if I could pick her up, she was already allowed to go home. She had called her daughter, but she didn't answer, then she sent a message that she had no time because she and her husband watched how solar panels were put on their roof ! Imagine ! So I drove to the hospital and found Myriam in a very good shape, she felt a bit tired and said she would go to bed. I wanted to do some shopping for her but she didn't need anything, so I helped her with her bag and she went inside She was very sad and upset about the behaviour of her daughter, who preferred to watch the installation of solar panels instead of taking care of her mother. It was good that I didn't know the street number, I was so furious that I would have driven there to tell her what I think !

It was still very warm in the evening when it was getting dark so that I took my computer outside and did my work there. Rosie sat inside on her cat tower and watched what I was doing. 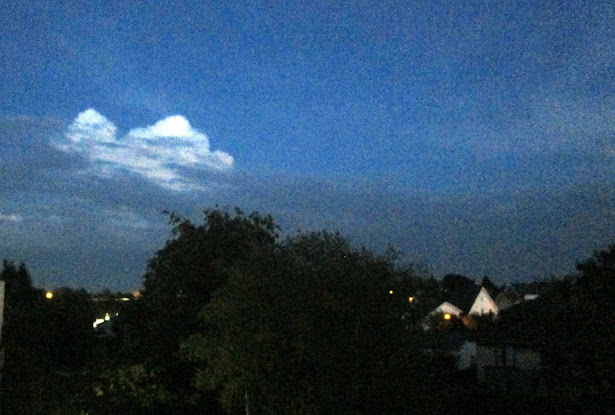 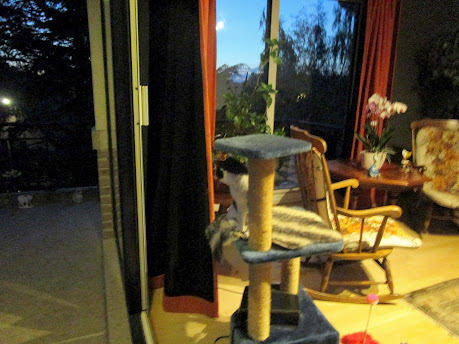 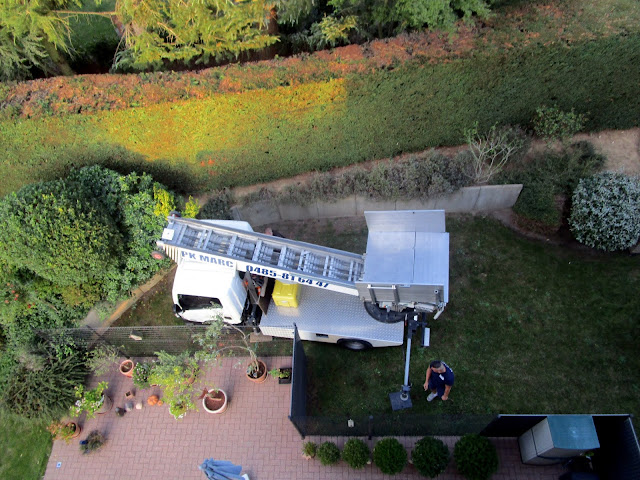 The next morning at 8 am a moving company arrived and had to go on our terrace to move the furniture of our neighbours who moved out. Of course they had told us before, but we are the only access to the next apartment. Anyway it didn't bother us at all, the people were very nice and everything they had moved to make space they put in place once the work done. 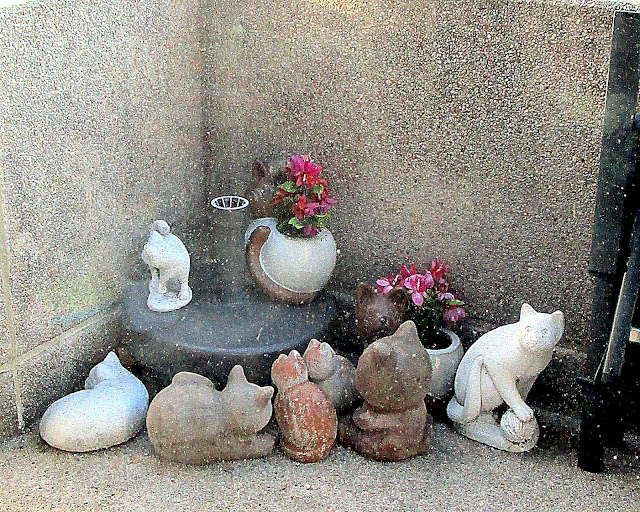 When I looked out of the window I saw my cats in a meeting in a corner, they had put them there because they were afraid to break them.
As usual we went to the "Dolce Vita" this time we were only three, and they joked that poor girl goes out with two old handicapped ladies ! And as usual the lunch was very good !
After lunch I sold my car ! It went very quick. A friend had recommended me a dealer and when I called and told him that I have a Hybrid car for sale, he was so interested that he wanted to come immediately and look at it. Finally we agreed on the price (through the phone) I haggled a bit and got 200 € less and when I arrived in the garage he immediately made an invoice, and immediately transferred the money to our account ! And then he drove me home and we chatted the whole way about Waterloo and how it had changed. He had bought the car for his wife !
Each year I make a collage of Grandson Toby, and this year it should be the same. I asked my son for 8 or 10 photos, new once, and of course I got at least 25 ! 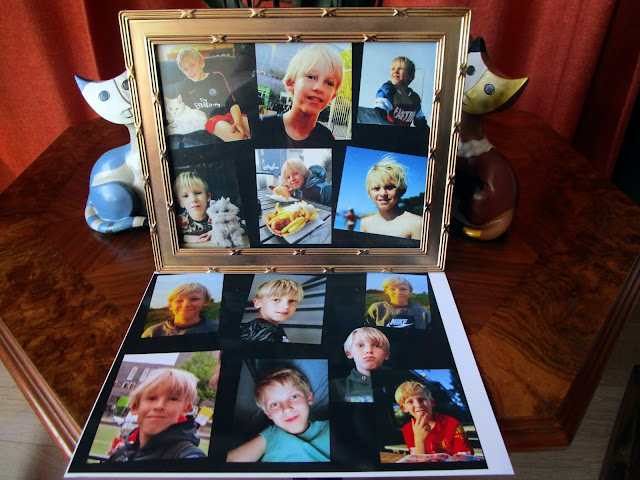 Above is the old collage still framed and the new one 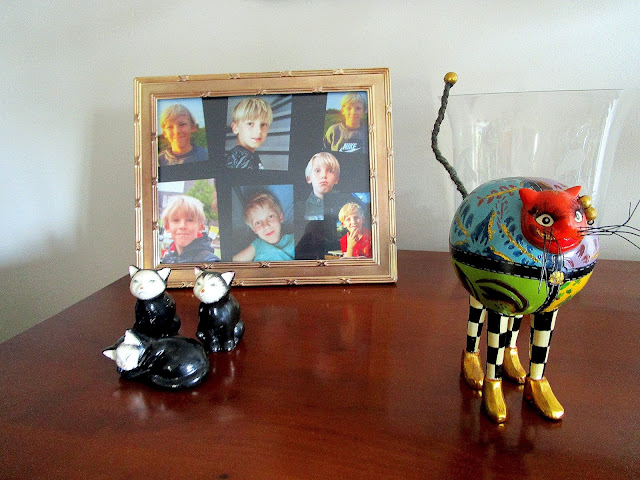 more participants at Susanne at Living to tell the Story.
Posted by Gattina at 06:00 12 comments: 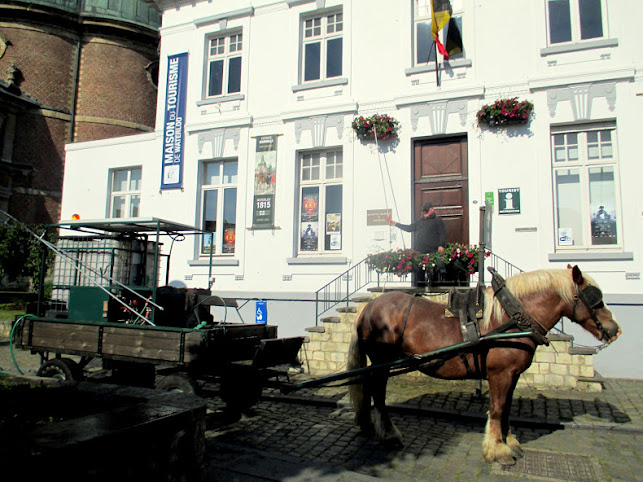 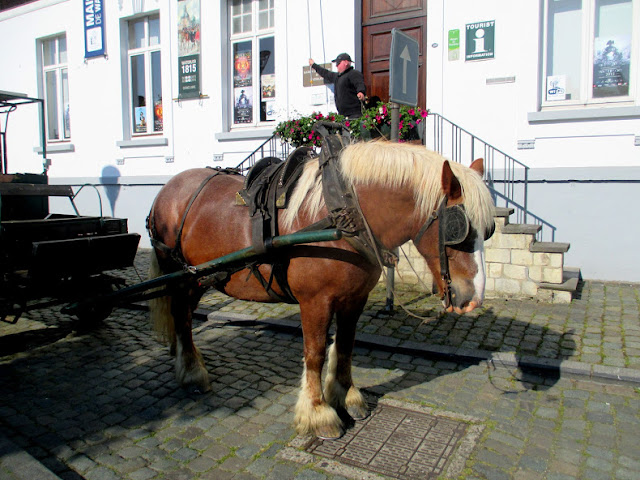 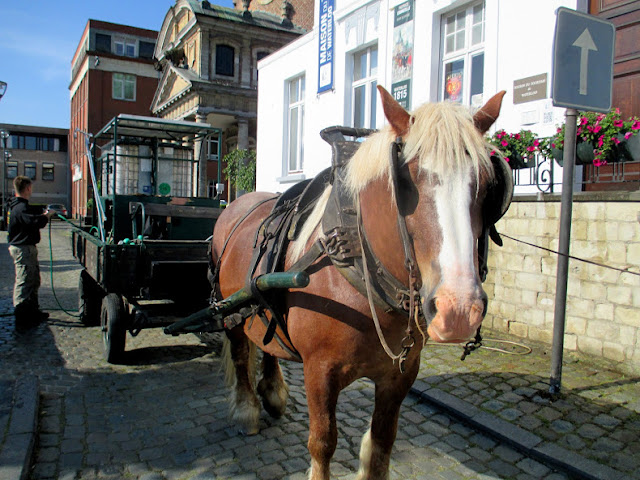 That's how they water the flowers early morning in Waterloo
more participants here, and Image-in-ing

Still more or less confined in my country, which means that I can travel but don't know i I can come back if in the meantime the country turns from green to red ! Therefore I prefer to spend my holidays at home and travel in my armchair. This tim I take you to to Dalmabace Palace in Istambul. It's I think the most beautiul Palace I have ever seen, and honestly I have seen a lot ! 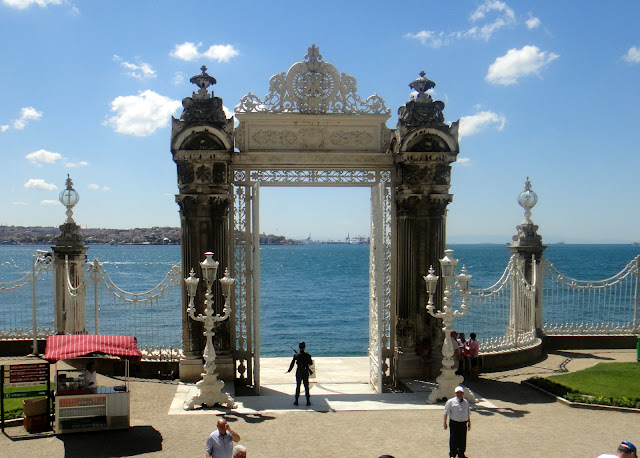 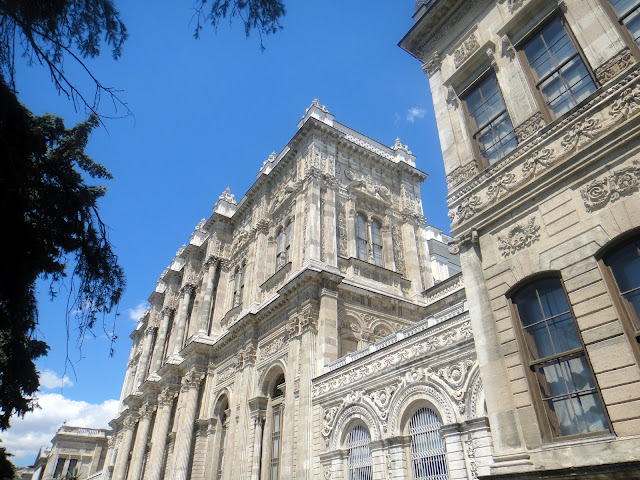 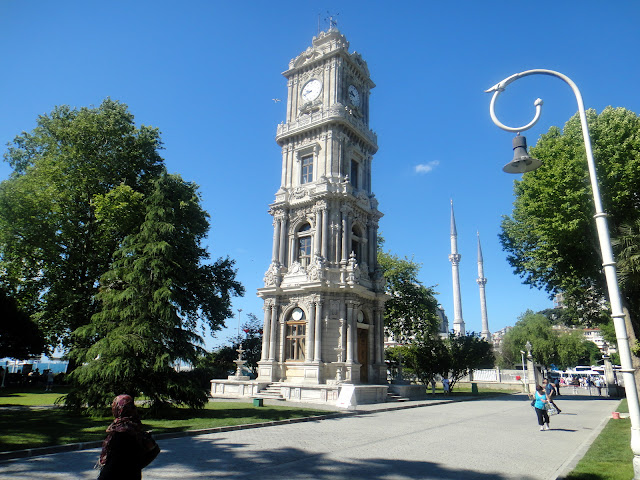 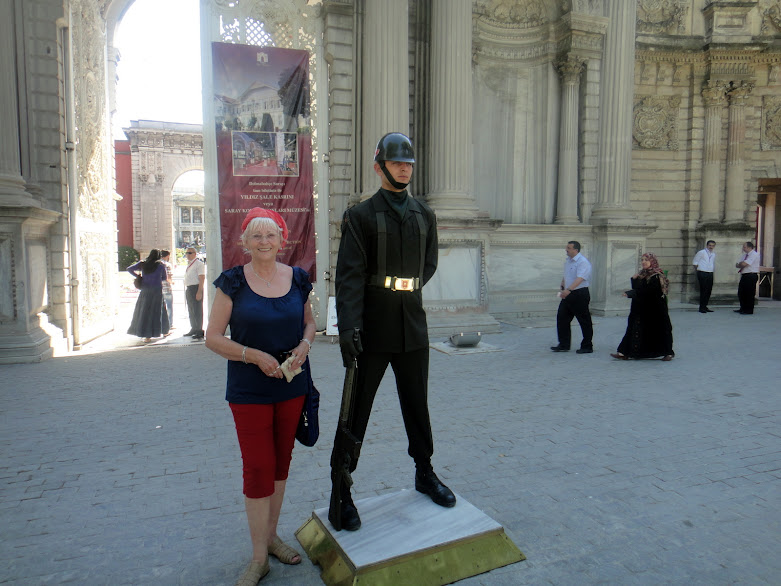 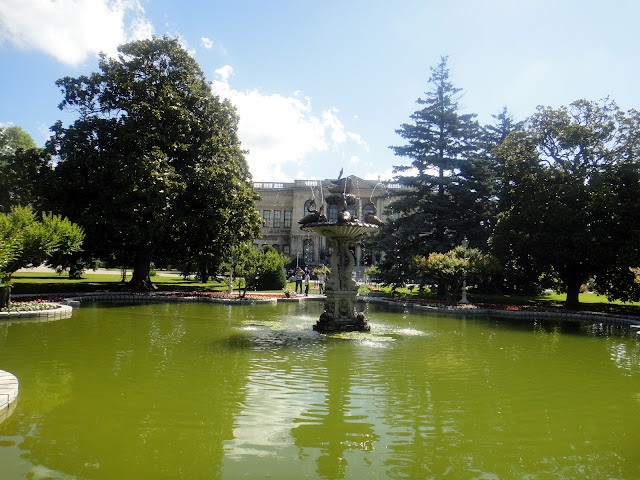 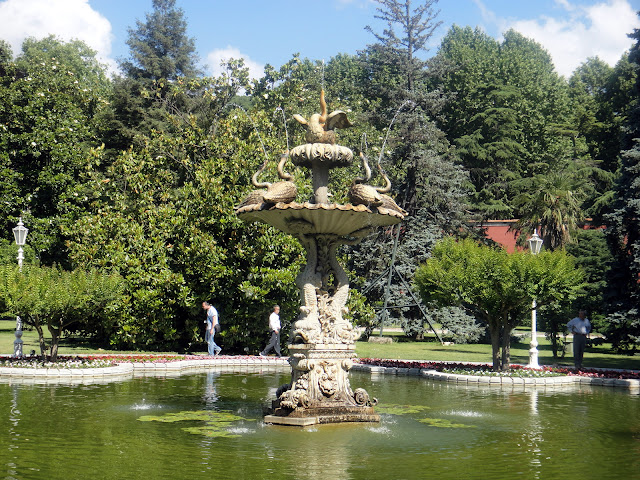 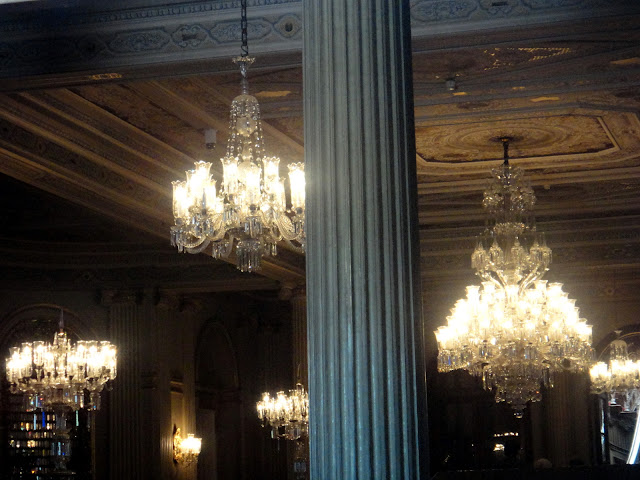 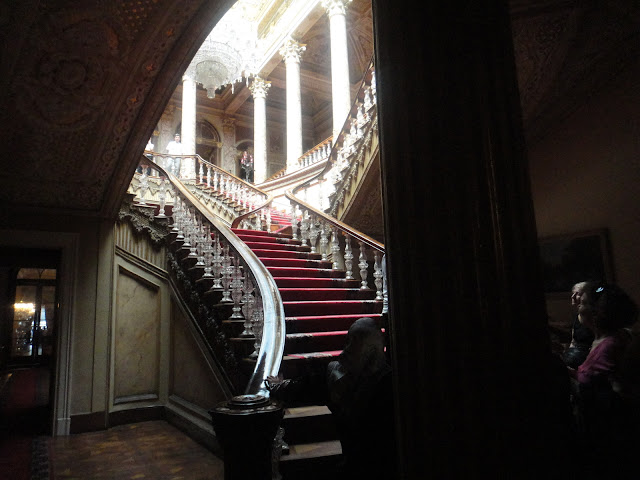 I sincerely hope, that at least next year we are all Coronavirus free and can start to visit other countries again !! 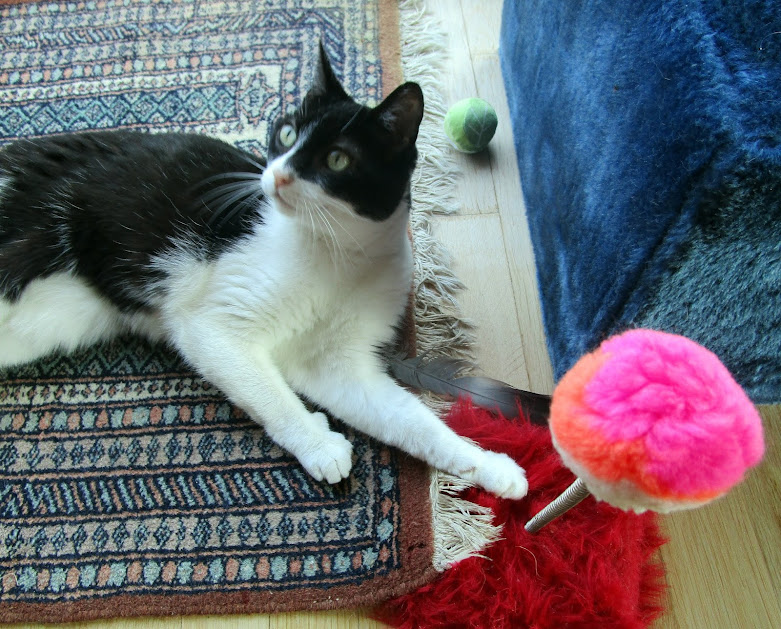 I have got a feather ! 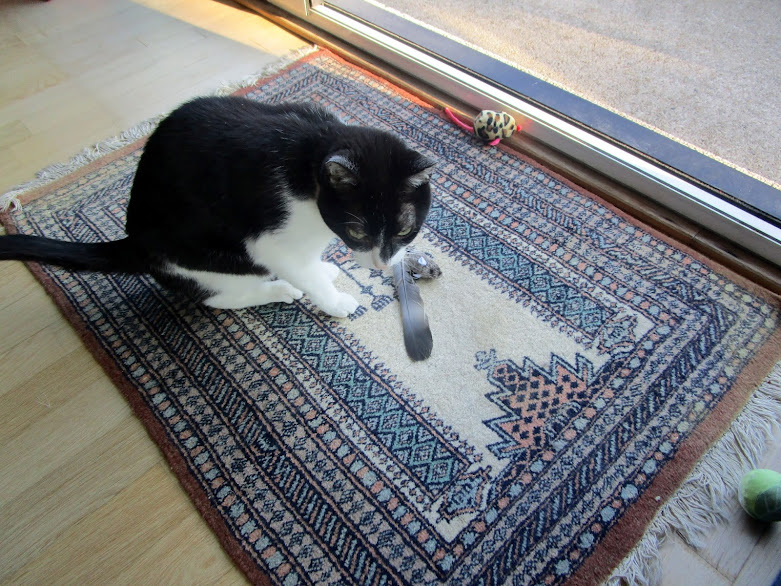 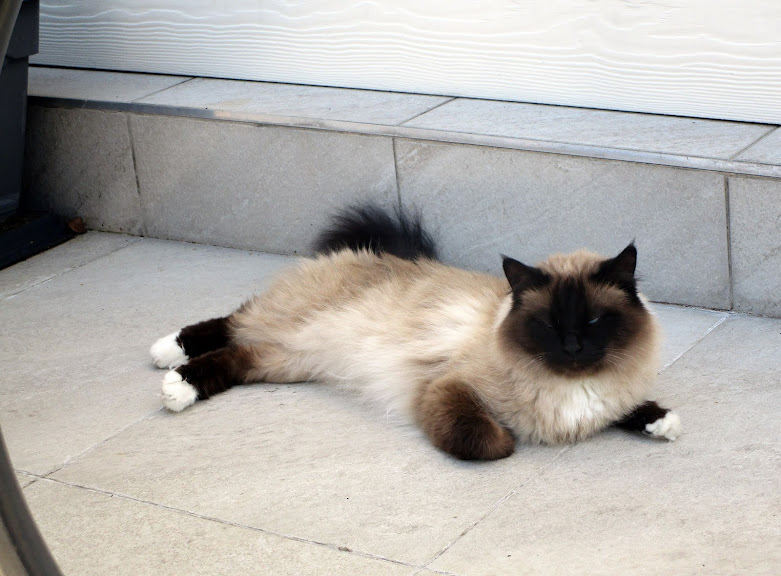 Ever since the year started I haven't bought any clothes. Then came the 3 month long lockdown where I couldn't buy anything, then came our move and I had no energy to go shopping and buy shoes, but this Saturday I thought, now it's the time you really need a pair of red shoes !! I have to add that before our move I had given away some shoes and I had only 3 pairs left. I am not a shoe fan, but when you wear red it looks a little strange if you wear black shoes in summer. 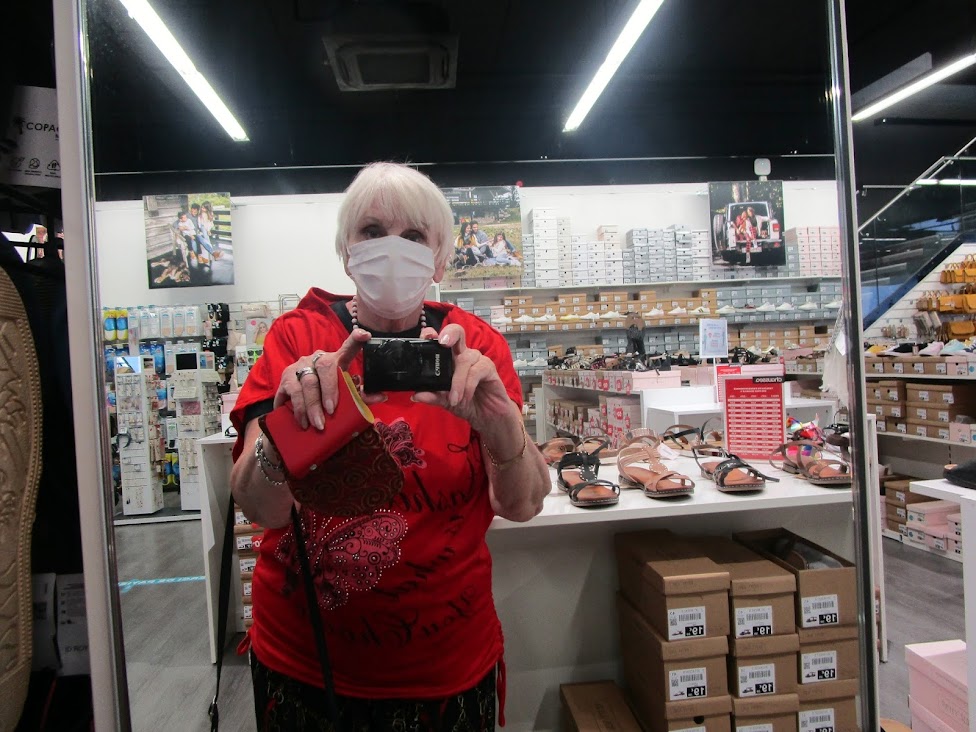 In the shop I had to wear a mask, on the street not anymore, at least in our town. I found a nice pair of red shoes almost immediately and as they were on sales I added another pair in black. At home I stated that I had bought the same model twice, in red and in black. Mr. G. suggested that I wear one red and one black shoe !O

On Sunday the summer came really back and it was warm ! Poor Myriam didn't feel well and couldn't come with me and visit Nicole.

As Mr. G. squatted the TV again with his Formular 1, I escaped, the noise of the cars made me crazy. It was a bit early for visiting Nicole, therefore I went to the Lion's mount to watch the tourists which normally on a Sunday when the weather is ice are there. Unfortunately since this historical site had been renovated for the bi-century in 2015 there is not much to see except the Lion and a Panorama and one single restaurant, not like before a lot of charming little restaurants they had "shaved" the whole place.

I saw a few going to the museum which is underground and very difficult to find, but apparently very nice. I have never been in there I preferred the place like it was before and in some way are still angry of what it had become. 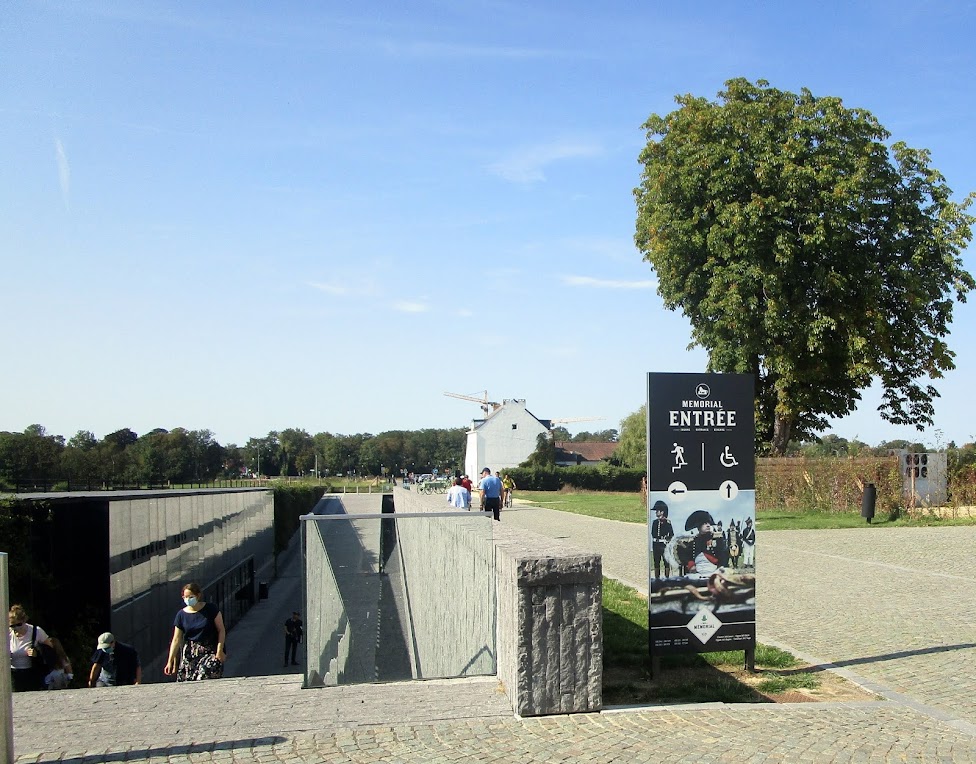 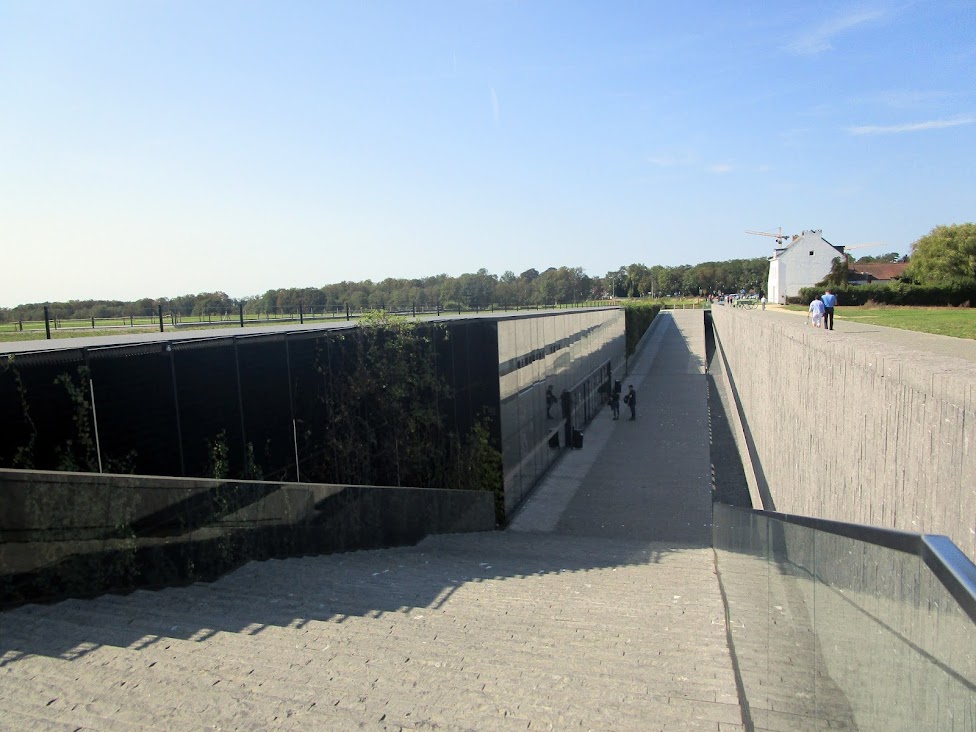 The undeerground museum,  only two Japonese tourists hesitated to go in or not 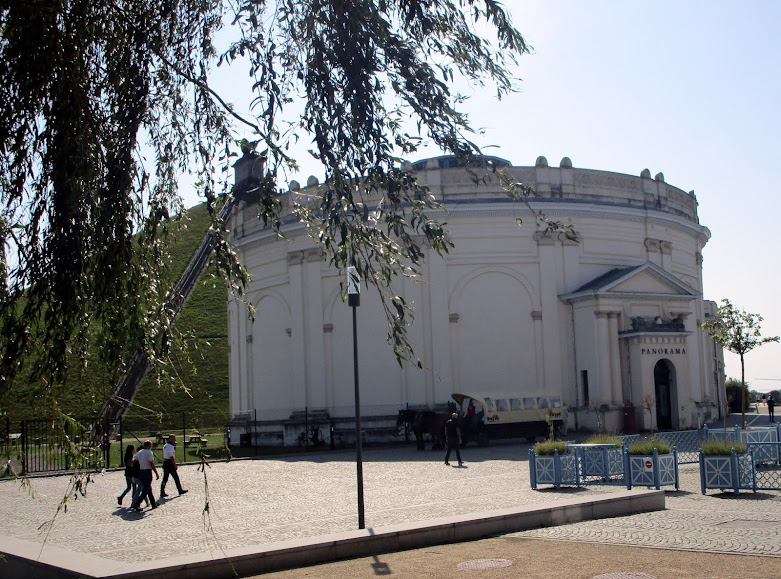 and the Panorama which also shows the battle behind you can see the Lion's tail ! 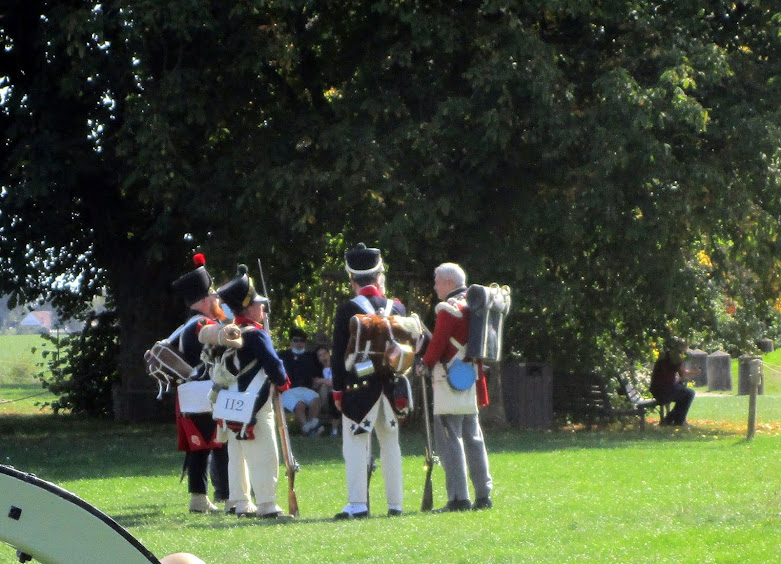 Which had really shrinked to maybe 10 soldiers who chatted and walked around and posed for photos ! 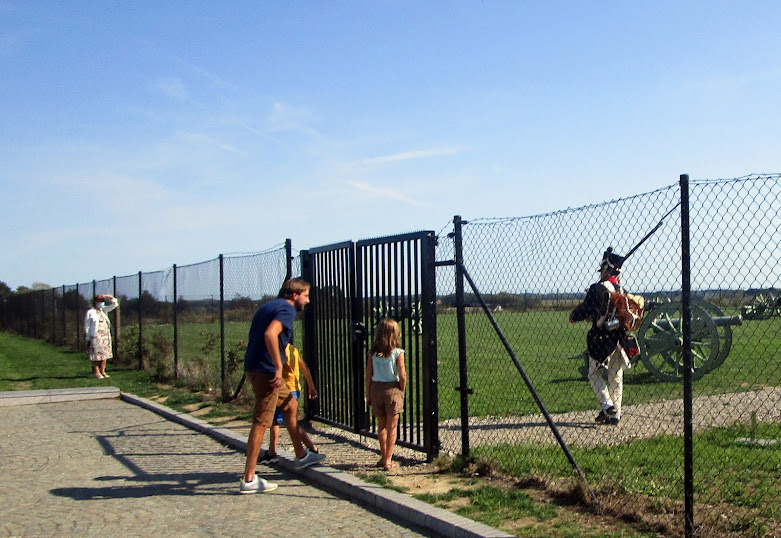 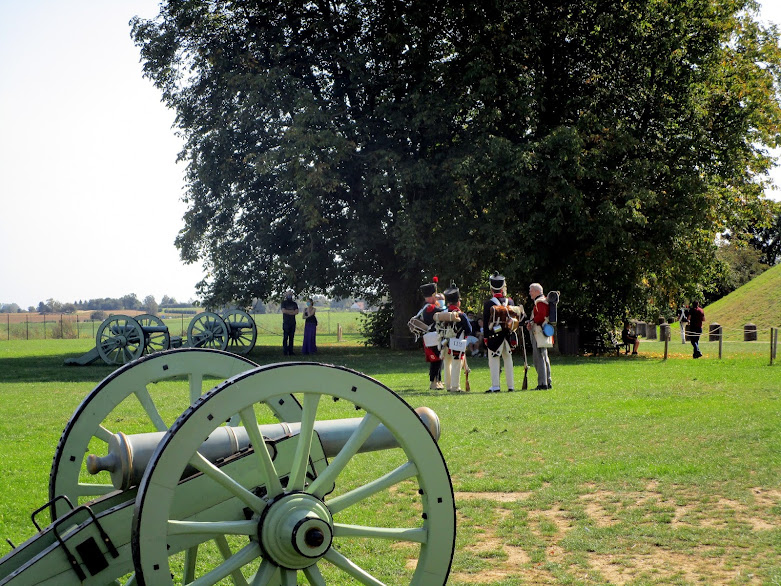 and then I saw Napoleon, whom I had never seen so clean ! He was probably disinfected not to get the Coronavirus. They only thing they had forgotten was, that he didn't wear a mask ! But he had always thought that he was a hero ! 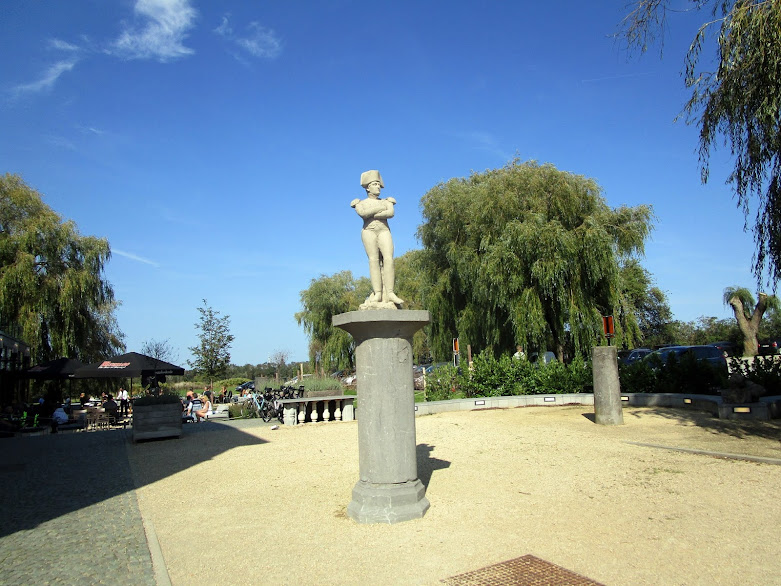 Napoleon as clean as never before and I know him since 60 years ! The statue had always been in an old stone grey !

I had intended to have a drink there, but when I saw the amount of tourists to watch, I thought I better go to Nicole and sit on her terrace, which I did and another Sunday was gone !