1. After my rather hectic weekend with our exhibition, I decided to rest and and shared my time between computer and TV 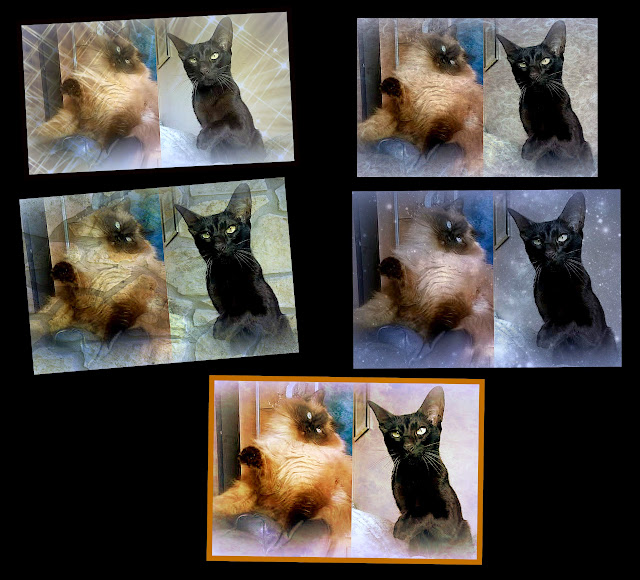 A lady who had visited our exhibition had asked me if I could paint her cats. I told her that it was ages that I hadn't painted a real cat portrait but I could do a composition of her cats on a photo. I showed her what I had done for "Feline Art" and she was enthusiastic ! She ordered a photo composition and that's what I did on Monday. Now I have to see if she likes the result.

2. For one day the weather was beautiful, the sun was shining and Nicole and I decided to go to the Waterloo battle field and inspect the ongoing works of the Hougoumont farm which once had been the headquarters of Wellington. 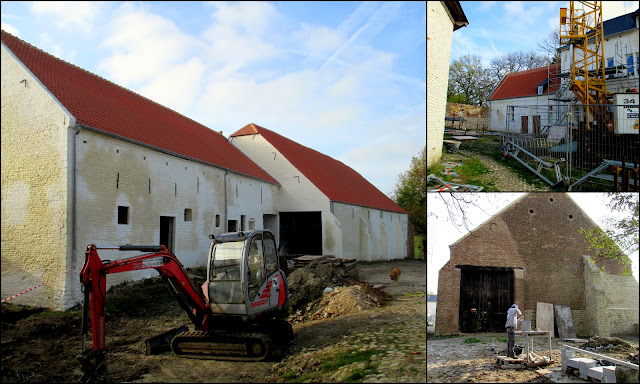 Compared to the last time I had visited this farm, the works had progressed a lot  ! They have to hurry up if they want to be ready for the 200th anniversary celebration of the Waterloo battle in June next year. 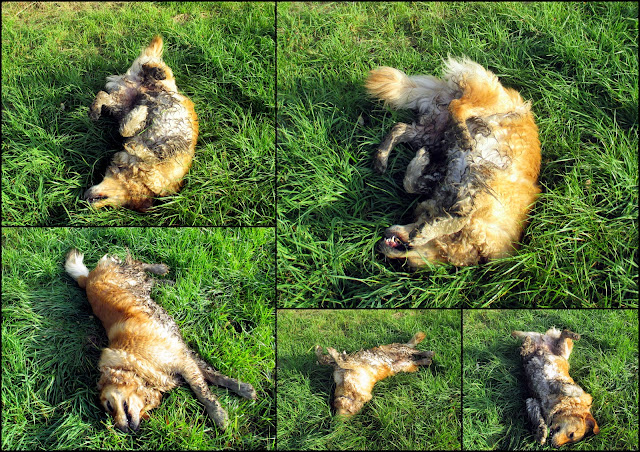 Good for him, but not for us, he found a nice place full of mud in which he rolled happily ! 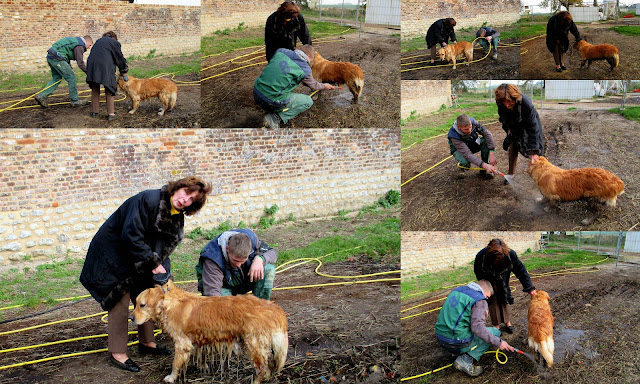 It was impossible to put him in my car in this state. The workers on the site were laughing their heads off ! I asked one if he didn't have a hose, he said yes and kindly washed  poor Charlie until all the mud was gone ! I put a plastic bag on the back seat and a towel and drove with a wet Charlie home !

4. The next day it was raining but I badly needed to go out for my weekly shopping ! 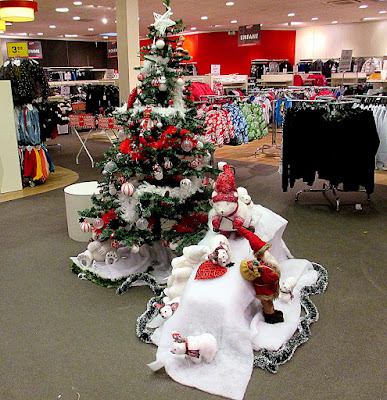 I was horrified when I saw that the shops had already put their Christmas decoration on display ! It seems to me that each year they are earlier, soon they will start at Easter !

5. In order to preserve my vintage beauty, I went to my favourite Indian shop to buy some cream. 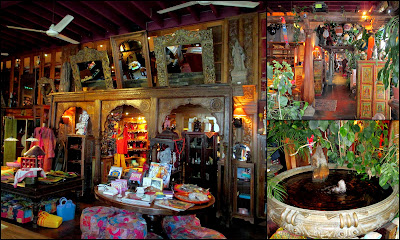 It is such a beautiful place, I could spend hours in there. It doesn't look like a store at all but rather like a private house. All sales benefits go to Indian street children and orphanages.

MY START INTO MODERN LIFE WITH A XEROX

There is not a lot of choice to find an English word starting with X ! Letters yes, like XL, or X-rays. But suddenly I remembered my first start into the modern world with a Xerox word processor !

In 1990 had changed my job and worked in a Financial Company. My Boss always needed to have the last inventions so he had equipped the secretaries with a Xerox word processor ! I had never seen such a thing, but I had to learn to use it for my translations. 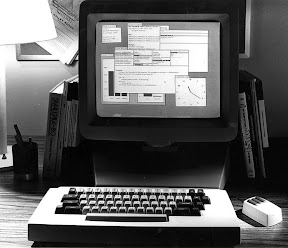 Therefore he sent me to the Xerox company for 3 days to learn how to use this thing ! It was awful. I couldn't get into my mind that there were icons in which I had to put my text. And of course the worst thing was learning to use a mouse.

My mouse had its own will and never went there where I wanted it to be. The arrow always was in corners or at the end or on the top of the screen. My eyes popped out to find it ! I suffered like a martyr !

One day my mouse didn't work at all anymore ! No arrow on the whole screen ! If it would have been possible I would have thrown the mouse against a wall, but it was attached, wireless mice didn't exist yet. And suddenly I realized why the mouse didn't work ! Instead of holding the mouse in my hand and move it around, I had grabbed my cigarettes ! Of course it didn't work. At that time everybody smoked everywhere and you were even considered as an outsider when you didn't smoke. Times have change, now we have to live healthy. Anyway after the 3 days of intensive learning, they send me back to the office where I had to exercise ! I have to admit that I wasn't very talented and my colleagues had to help me out quite often. And now I handle a computer better than my washing machine ! 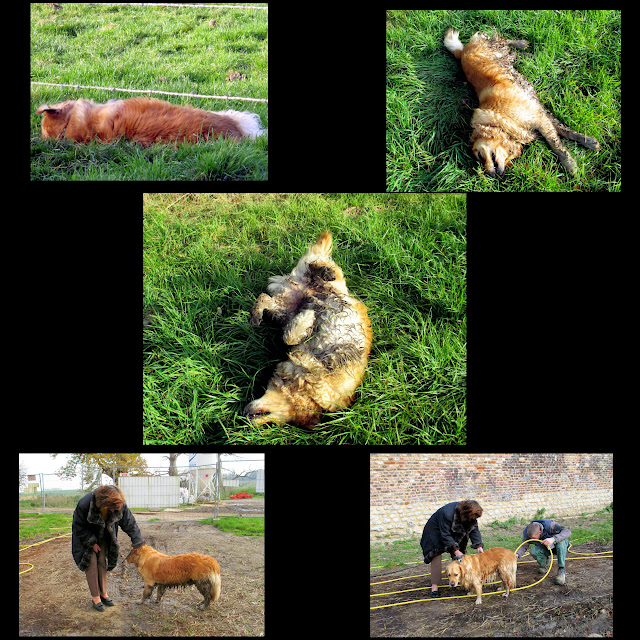 A walk through the country side with Charlie

THE "CENTRAL" PARK OF WATERLOO

In the middle of Waterloo is a very beautiful park. Once there had been a castle there, which had been demolished in the 70th, and even with my Mrs. Marple/Sherlock Holmes skills, I couldn't find a single picture of this castle on Internet !

The only building which the city found interesting enough to keep were the old stables ! It was renovated and transformed into an exhibition hall. 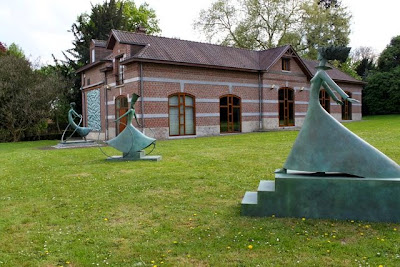 The statues were added a couple of years ago 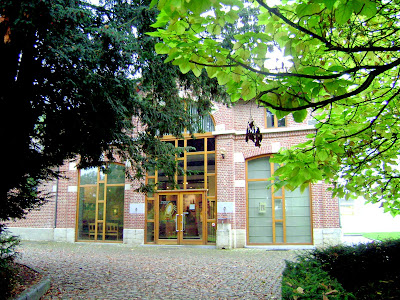 Painters and Sculptors are exposing here 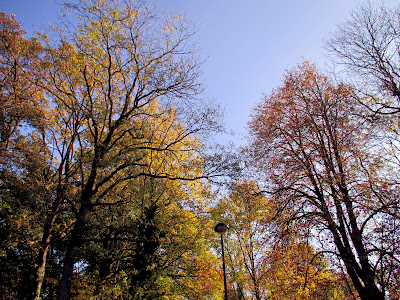 The park is a nice place to walk around 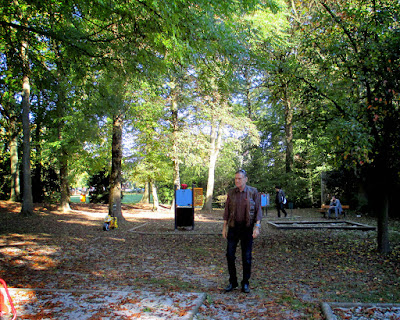 We did it on a Sunday morning 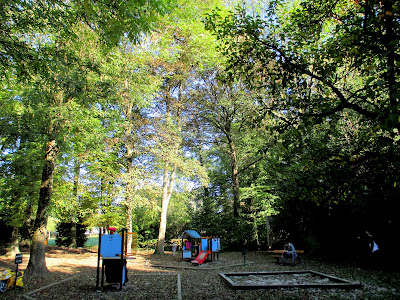 There is also a playground for children 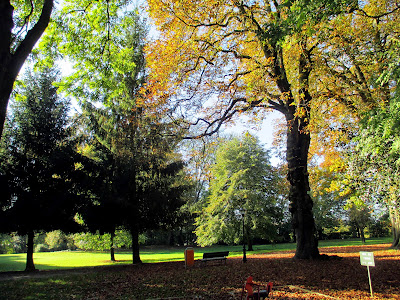 and lots of benches to rest. The trees showed their first signs of autumn 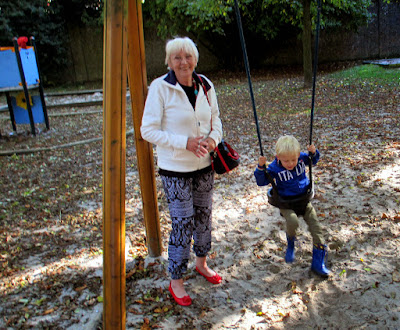 Grandson Toby had a lot of fun 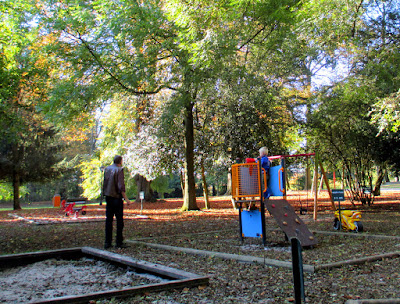 It had been the last summery weekend in the middle of October.

MY WEEKEND OF OCTOBER 25

What a busy weekend ! 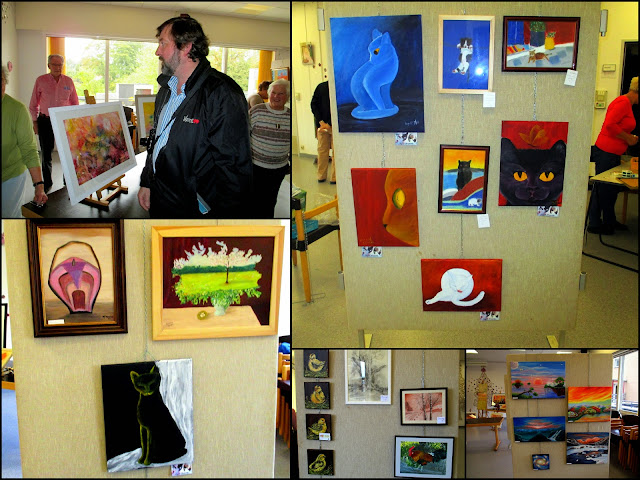 a photographer from the newspaper "L'Avenir" (The future) came and took pictures. 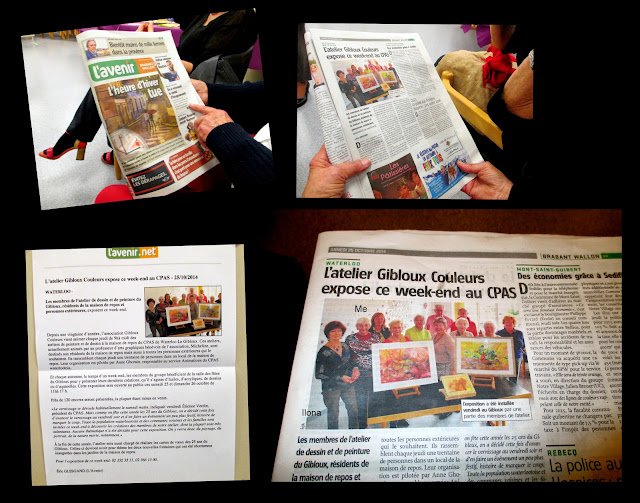 and the article was published the next day ! 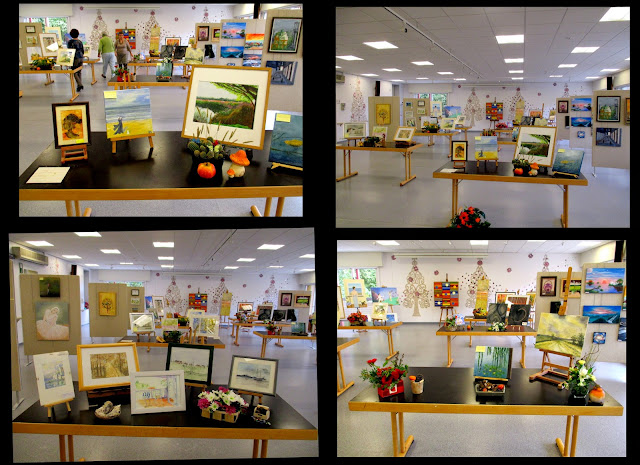 Now the room was ready for the vernissage 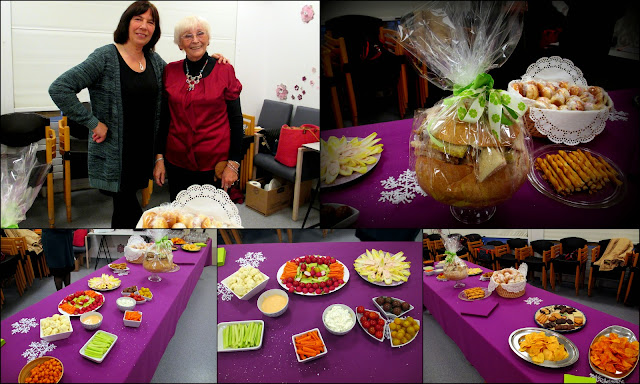 The buffet looked very appetizing, and had a lot of success. Nothing was left ! 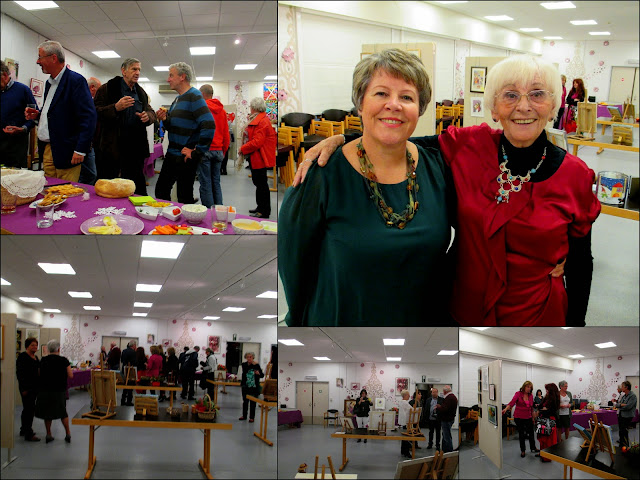 People started to arrive. Mr. G. met our son's math's teacher, whom I hadn't seen since for more than 30 years  ! Micheline (our teacher) and I posed for a picture.

The vernissage was a full success, there were so many people and also some aldermen from the Waterloo city. At 8 pm I left, I was exhausted it had been a very long day ! 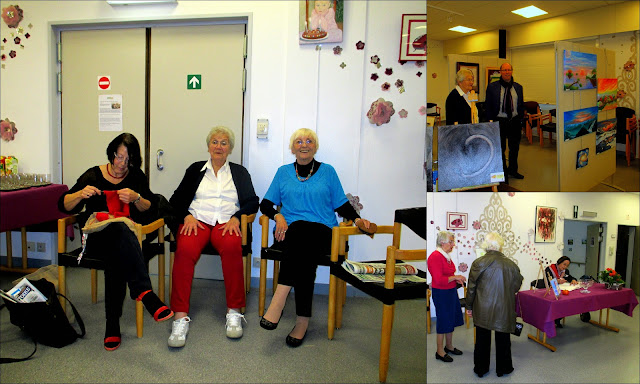 Saturday and Sunday the exhibition was open from 11 am til 5pm. We were the guards, in the middle sits our administrator who will celebrate her 80th birthday on Thursday ! On the right the aldermen for culture showed up for once, all the other years he was there probably as a ghost, because we never saw him and he pretended that he had been there ! Politicians have to lie, otherwise they wouldn't be politicians ! Most of the people wrote a little note in our "golden book" appreciating our work.

There were again a lot of visitors 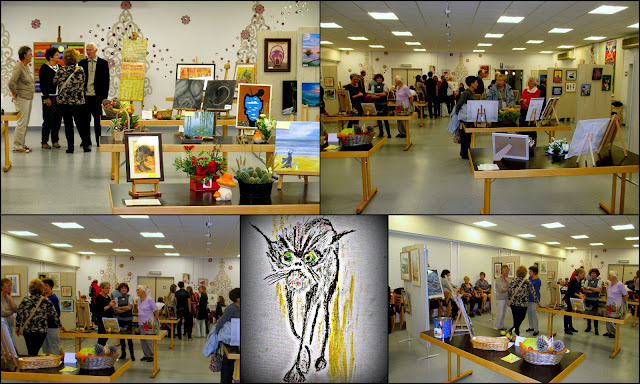 The people chatted and some of them hadn't seen each other in years. This masterpiece of a cat should demonstrate "anger", but everybody thought it was a Halloween cat. 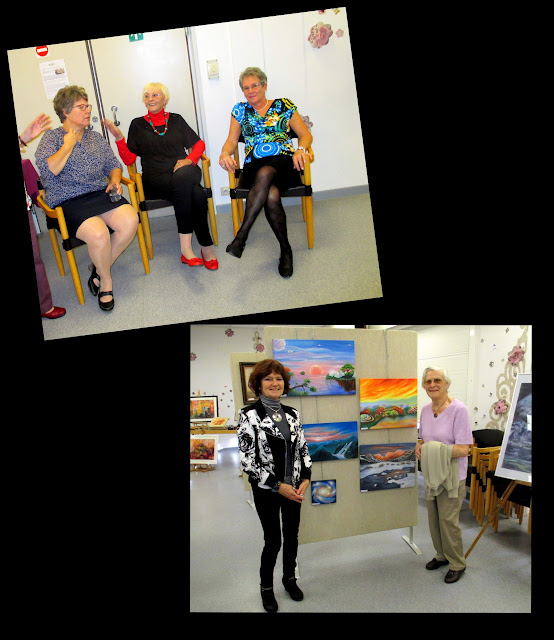 Finally on Sunday the exhibition was over, I was the guard for the last time together with our teacher on my left and Christiane on my right. Ilona came with her mother who is still fit like a fish in the water despite her 90 years !

All in all it had been a very nice exhibition, but now I need some rest !