REPEAT OR NOT REPEAT ?

The trouble when you are married for 50 years there are lots of things which repeat themselves all the time for example stupid jokes. Mr. G. loves jokes I don't like them but I am obliged to hear the same jokes for years  and years, because he repeats them to other auditors. 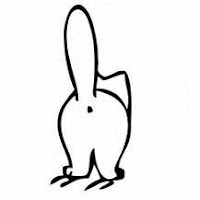 "Close the door is another sentence" which is repeated every day, because he leaves the doors wide open as if he would be an elephant to go through.  I don't like closed doors either but leave them just a bit open so that our cats don't have to scratch the doors ! 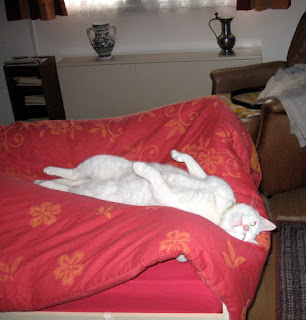 Of course you also have to eat, sleep and drink which is also repeated every day. My cats have their habits which are repeated every day at the same time ! There is no surprise and it's almost boring. Once they have chosen a place to nap, they stay there for at least 4 weeks before choosing another. One uses to sleep on my bed and when I want to make it I have to move her around and she doesn't even open an eye.

Routine things I hate, but they are repeated every day like a train schedule. And things I wish they would repeat themselves don't happen, like going on a cruise around the world, or only travel once a month to another country. 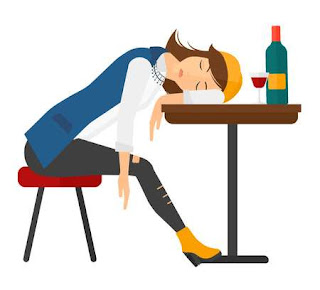 On Monday it was awful outside, wind, rain and of course cold ! When I think that not even 10 days ago I wore a T-shirt !

Since a few days I wanted to buy a one piece suit in fleece to wear at home ! I made a few shops, looked on internet and finally found what I was looking for in a shop who sells everything ! 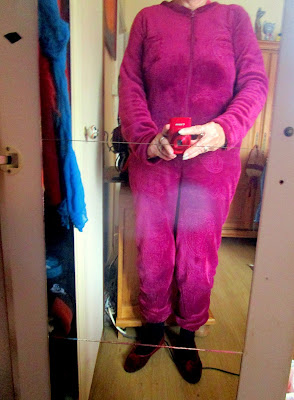 It's so soft, very cosy to wear and keeps warm and with that I even got a long cardigan in the same fabric. The only problem is when you have to go to your "comfort" room you have to undress the top ! So it is not practical for someone who suffers intestinal problems !

Although in our street nothing had been decorated for Halloween and only very poorly in the city, I had put my pumpkin outside in case kids would ring the bell and ask for trick and treats 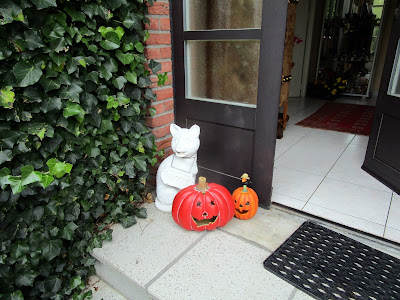 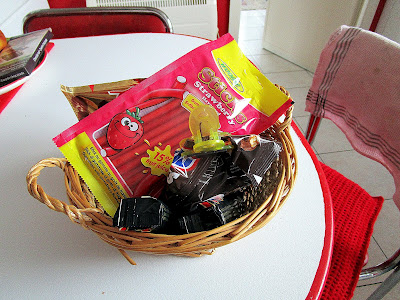 But nobody showed up ! Last year I had nothing and they came, this year I had and they didn't come. Now I have to find some poor children, because we don't eat sweets !

I am still waiting for my new sofas, the delivery had been delayed for a week, so we are still doing our camping, which doesn't disturb me at all ! 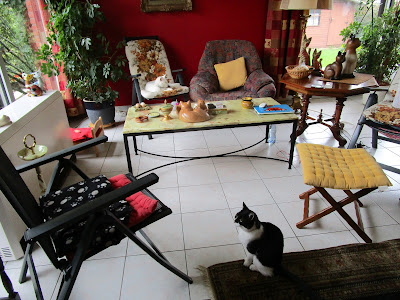 The cats are unhappy, because they can't get used to this "mess" !

I am still very enthusiastic about our new painting style called "Pouring". This was last Thursday 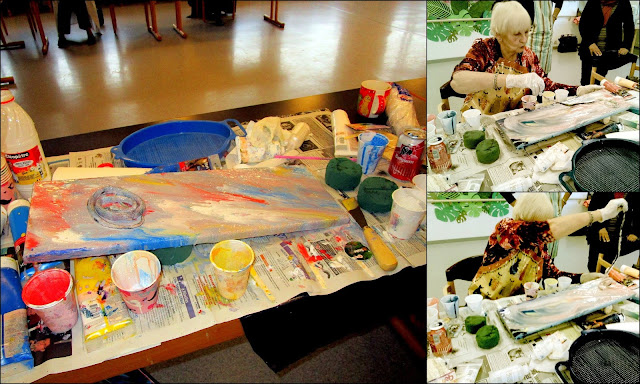 Where I tried to pull a snail over my pour ! Somebody took these pictures because I look so concentrated. Now I have to wait next Thursday to see what is coming out of this "modern" Art !

The week ended with me having caught a cold and feeling lousy ! My new fleet suit came on purpose, I am laying (half dead) in front of the TV and watch a film while falling asleep, making rewind and I am still not sure if I have seen the whole movie ! 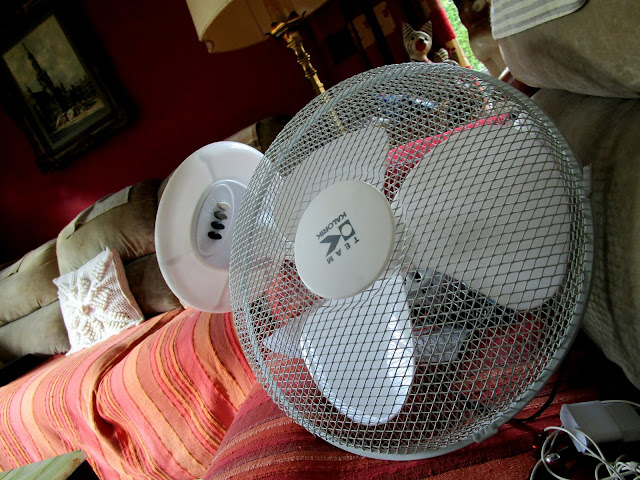 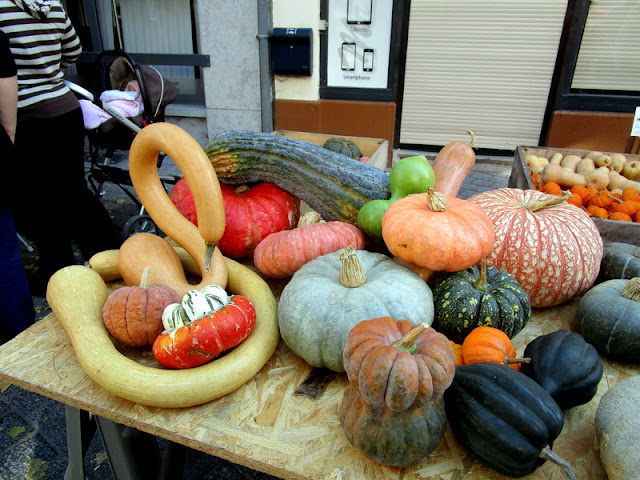 
more participants here
and Image-in-ing
Posted by Gattina at 23:10 7 comments:

Here is a map of the whole tour and how it started.

When we arrived in Warsaw the capital of Poland, I could see out of the bus windows the varied architecture from Gothic churches and neoclassical palaces to Soviet-era blocks and modern skyscrapers. It looked very modern and not at all as I had imagined. To be honest I had very mixed feelings. I had heard so much about Warsaw when I was a child, which had impressed me, like the story of my great grandma who died on the street in a trench fleeing from the Russians. My grandpa's family had a farm in Poland. I don't know very much about it, but it was enough. Today apparently the farm is still there.

We made a sightseeing tour around Warsaw with a Polish young woman as a guide. What we saw looked all very modern and charming, nothing reminded the dark times of WWII. Finally I asked the guide where the Warsaw ghetto had been. First she faked that she hadn't heard me, but as I insisted she pointed behind her where houses stood and nothing special and said it was there. I understood she didn't want to talk about it.

It started to get cold to very cold 3°C (37 F) in the morning ! Last week we were still in the 20° ! This sudden change made me freeze, despite heating and two thick pullovers plus a blanket while watching TV. Mr. G. who has difficulties with the temperature changes and dresses for the Northpole when it's hot and a little T-shirt when it's freezing, caught a cold and spent most of the time in his bed ! 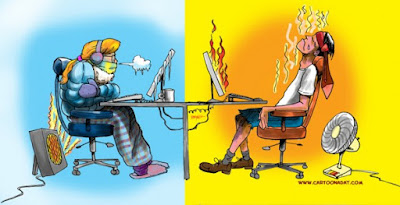 Now  and a few weeks ago

And as usual when somebody around me has a cold, I feel obliged to get it too and was coughing.  I took some wonder pills and today it's better. Therefore I didn't go out and that was good, because the whole Saturday morning I spent to get my Gmail back ! I had realized that I didn't get any emails not even the comments or spams just nothing. Instead there was a red line above the email page

You can't send or receive emails because your're out of storage space. Try freeing up space or purchasing additional storage. I had this sentence for at least 2 months and as nothing happened I thought it was maybe an error, until yesterday. My private gmail worked perfectly. I got very angry paying for using gmail because of photo storage ?? what was that ? I had never asked for Google Drive or Google photos, it just had come with Window 10. I googled for help, didn't get the right one, I clicked on everything and finally I had the right page (after 3 hours) there it was written :

"Compress your photos or purchase more storage" ! Of course I clicked on "compress" had to wait an hour and then my gmail worked again and the Google photos looked as before. The Drive I had emptied before. 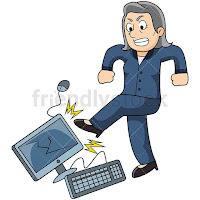 I just did my Blog work and after that I had enough of computers and watched TV while doing the laundry ! Nice to be a modern woman ! 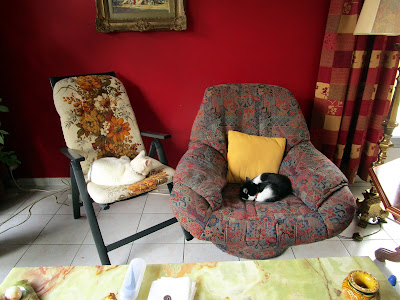 Arthur and Rosie had no other choice then to get used to the fact that their old sofas had disappeared and reluctantly sleep now on what is available ! 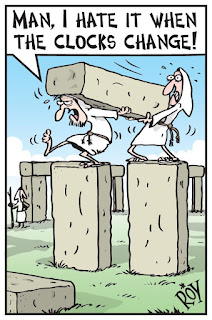 During the night we got the so said "Daylight saving time" ! I wonder what we save ? When you get up early you need light because it is dark and when you come home in the evening from work its dark again. Strange way to save electricity !

Sunday I wanted to go to the market but it was so cold and windy that I preferred to stay home and "attack" my post about Warsaw, slowly I approach the end of my big tour around the Northern Countries. It was quite some work  because there were so many buildings I didn't remember what it was and I had to google to get my post together.

Then I had enough and went to Nicole, who found this Sunday very boring too. As she wanted to do some changes in her Facebook page and learn how to put pictures from the camera to the computer we were busy, but still had time for a coffee and a piece of cake. 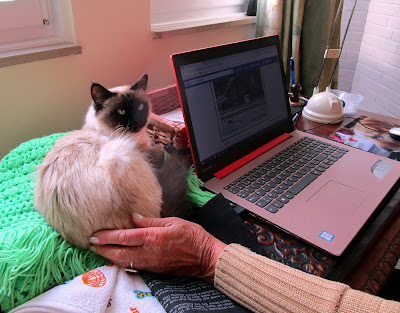