My holidays are slowly coming to an end. Fortunately the last days the sun had come out and it also was a little warmer and less wind. 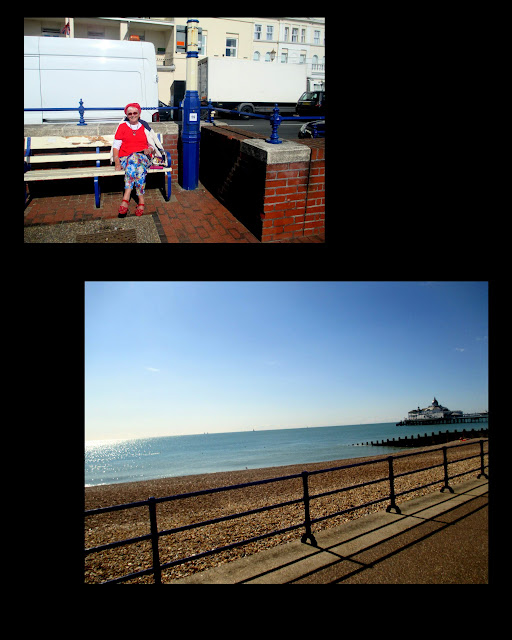 from where I had this beautiful view. There were always people walking by and as I appeal apparently to dogs who came to sniff my feet (I swear I washed them) and so a conversation started. Then I walked along the beach, from time to time sat down and read my Kindle.

In the afternoons I usually went out. 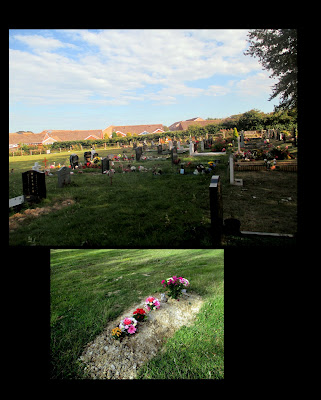 I went with Doug to the graveyard to visit Anne's grave. It was a sad moment. But then we went out for  supper and ended the day with a last drink in my hotel.

I also met Hillary from "Positive Letters ...inspirational stories", who lives in Eastbourn. I had met her already last year and it was so nice to see her again. She proposed to take me to the Herstmonceau Castle in Hailsham, which is now an International Study Center, of Queen's University (Canada) 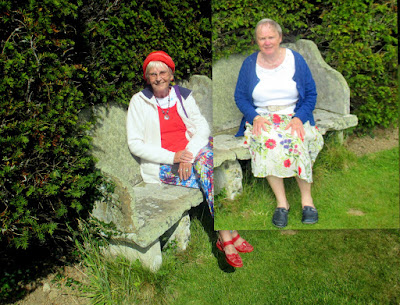 Fortunately we had very nice weather and we walked around in the superb Elizabethan gardens. 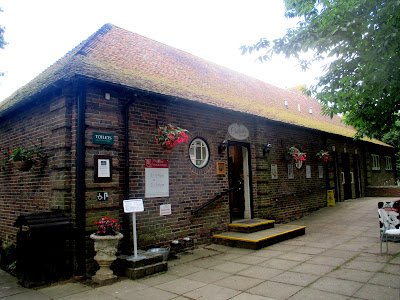 We also had a little lunch in the Tearoom 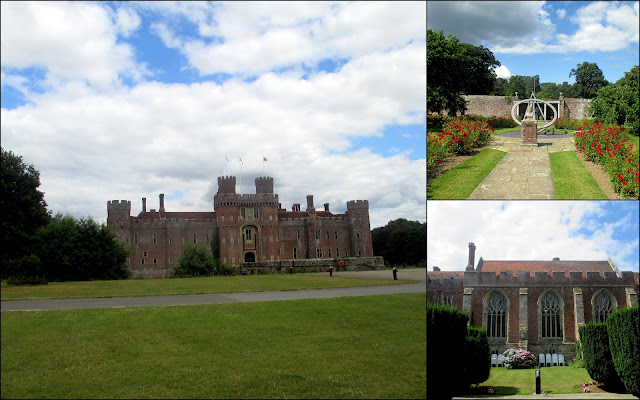 We walked around the castle and admired the Giant Sundial 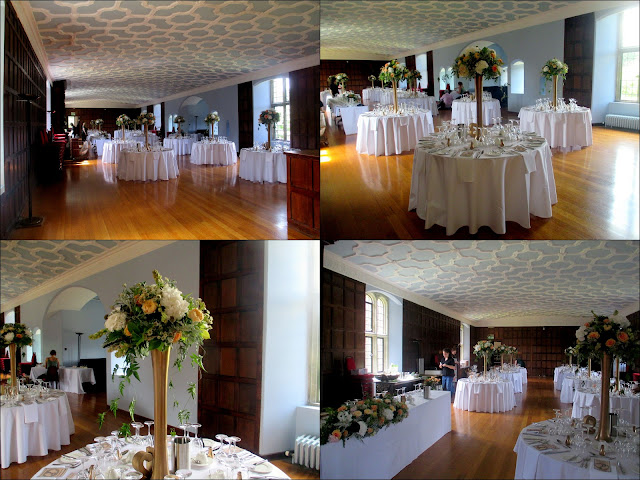 In the ball room tables were beautifully dressed for a wedding ! It was certainly not for the daughter of a toilet cleaner ! It all looked very luxurious and beautiful; 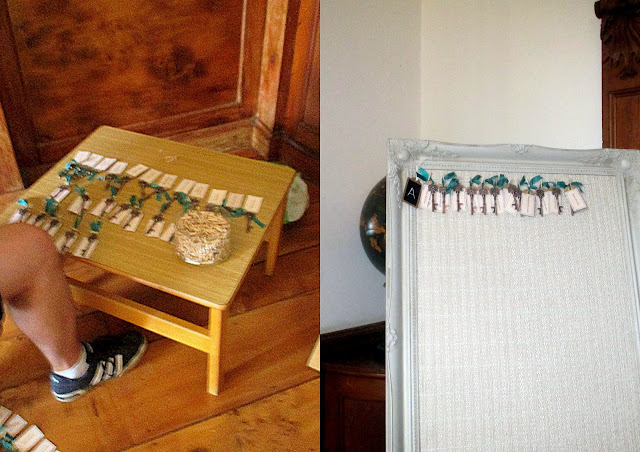 Two men were busy to put little ribbons with the table numbers on keys, which were at the same time bottle openers so people could easily find their tables !

As I had started not feeling very well, I probably caught a cold with this icy wind in the last days, Hilary drove me to my hotel where I fell asleep ! I woke up because I was hungry ate a Sandwich and continued sleeping. 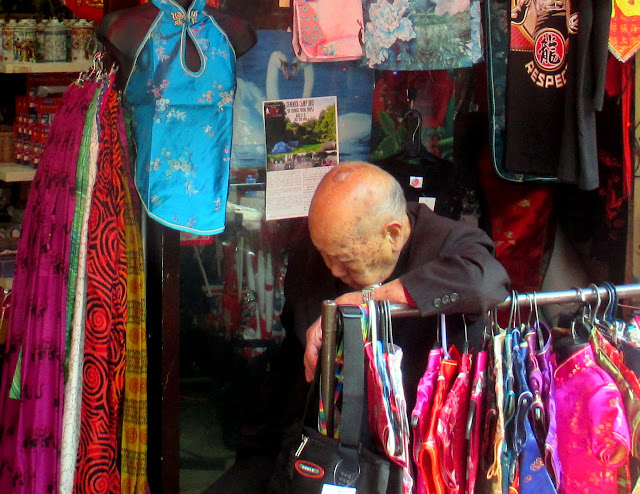 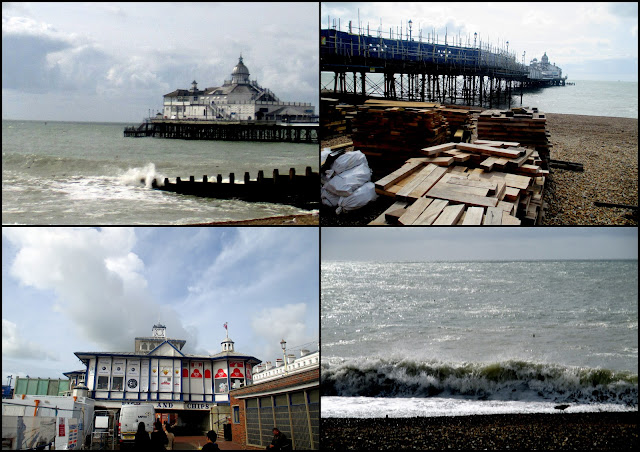 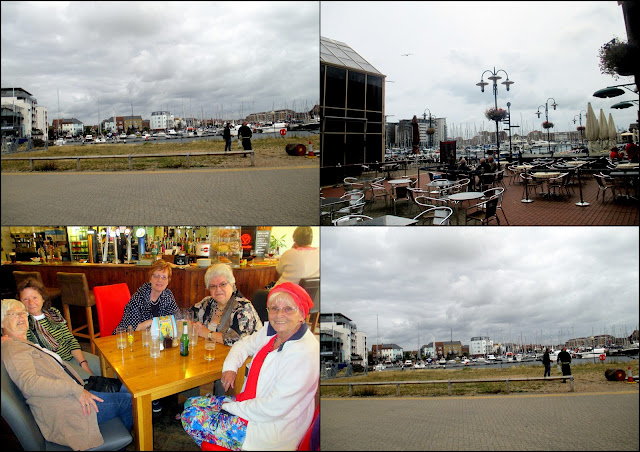 This morning when I woke up and opened the curtains, I saw some blue sky ! What a delight after this horrible weather yesterday ! 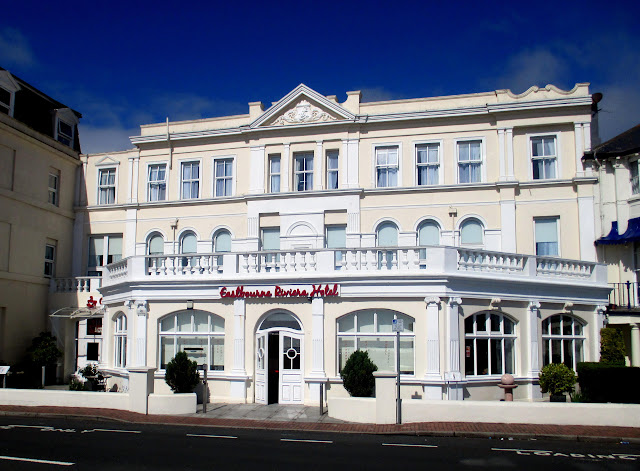 After breakfast I went out and took  this picture of my hotel. It's located just at the seafront. 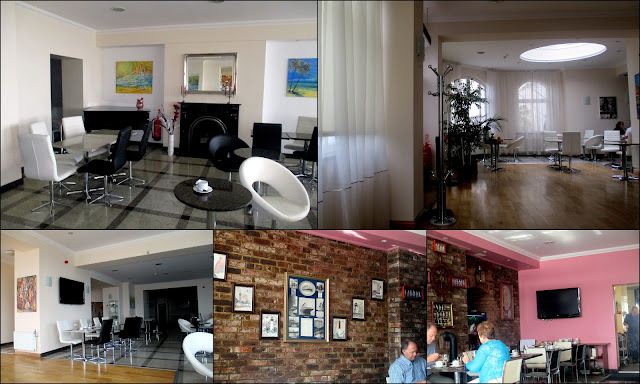 The breakfast and dining room and also a piano in a corner. Here I sit with my little computer and write. 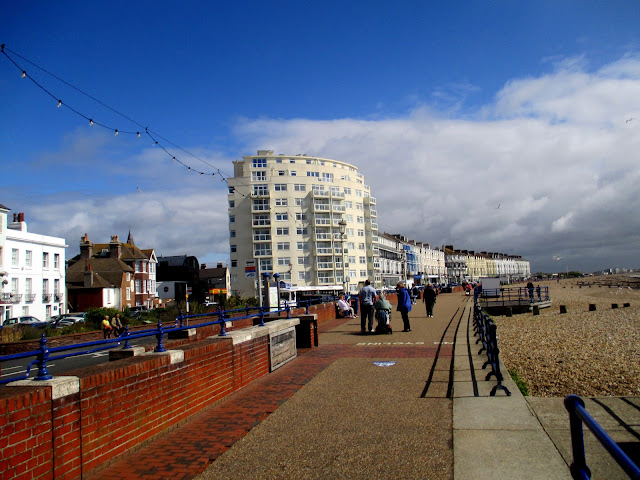 I crossed the street 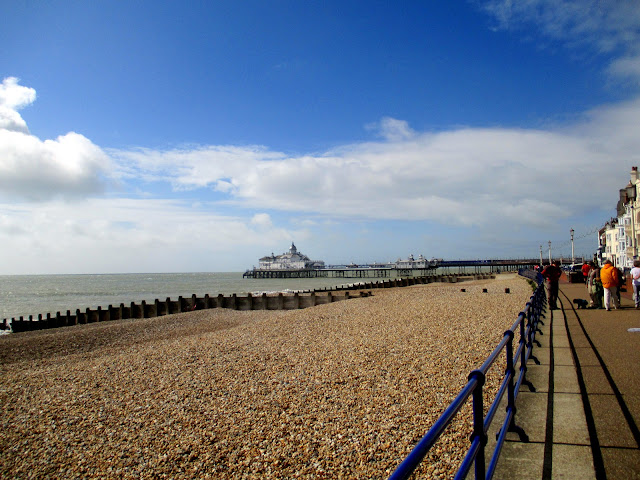 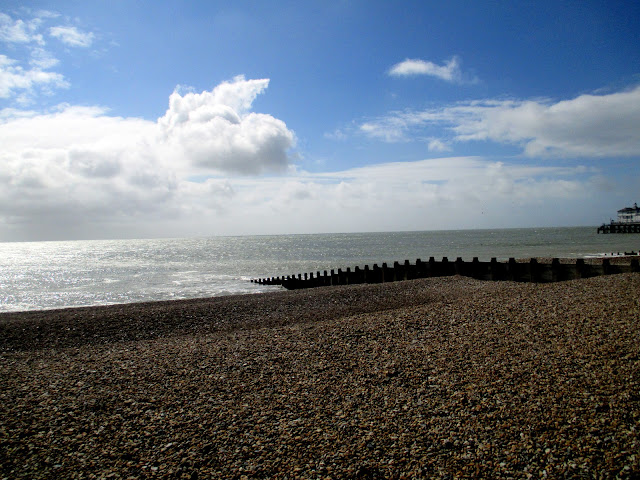 sat on a bench and had this gorgeous peaceful view. I stayed there enjoying the sunshine and watched the people walking by. Everybody is so friendly, although I didn't know these people they all said a good morning to me. 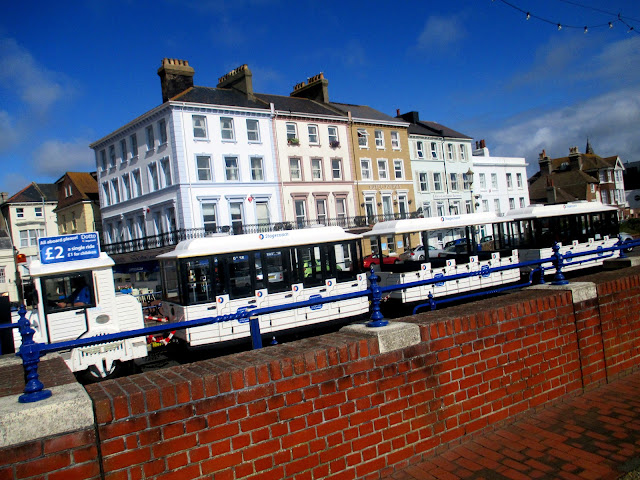 The little train ran already from one beach end to the other.

At 11 am Doug picked me up and we went to friends of him and Anne living in Worthing an hour and something driving. They had invited me as they do each year. It was so nice to see them. 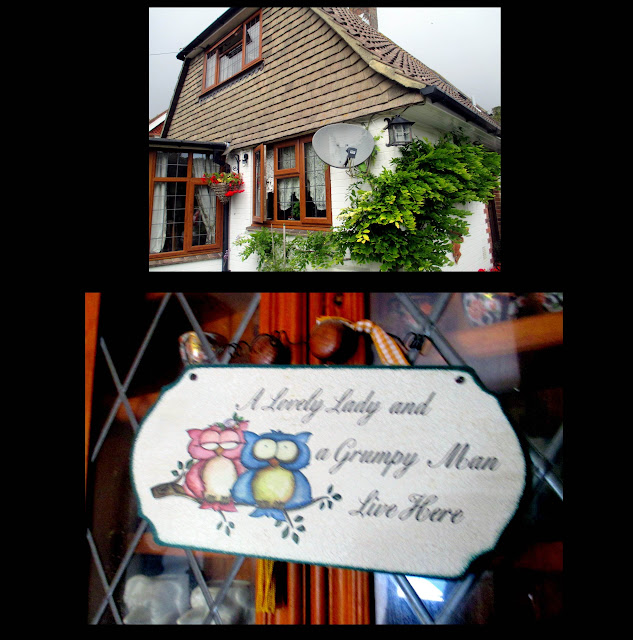 They live in a cute old cottage and at the entrance I saw this sign, which would fit on our house too ! 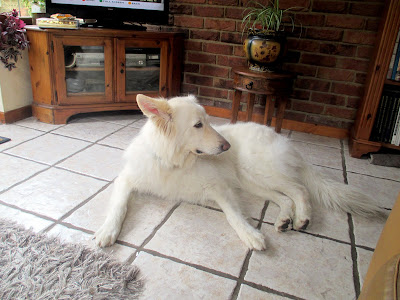 They have a very friendly white German shepherd called Lilli. Another couple arrived and we all walked together down to the beach. 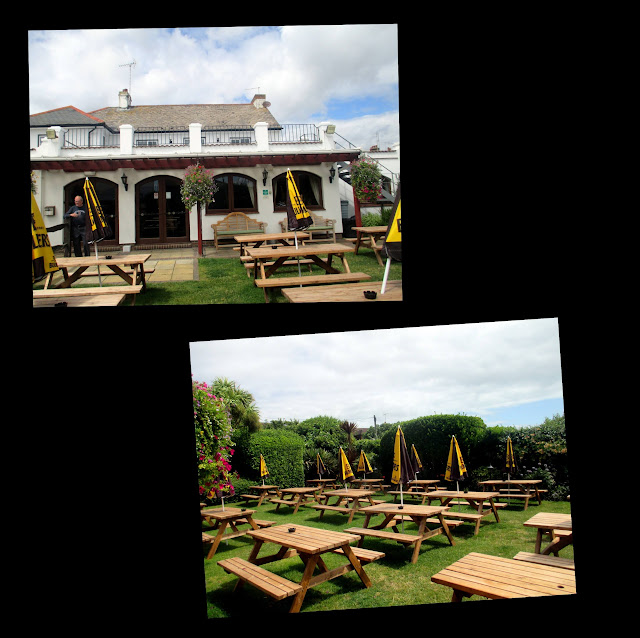 We had a delicious lunch in this Pub 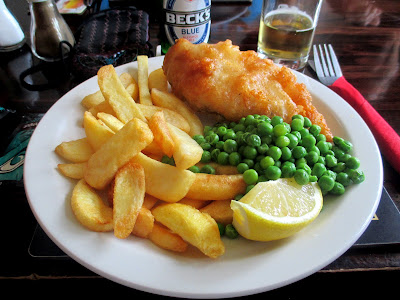 and I of course had my traditional fish and chips ! After an ice cream we returned and had coffee at Moggie's house. We spent a very  nice afternoon all together and left at around 6 pm.

I couldn't eat any supper I was still so full from lunch ! So Doug and I went into a Pub in Eastbourne and had a last drink together. Then he dropped me off at my hotel.

The air of the sea makes me tired and went to bed very early !
Posted by Gattina at 06:30 19 comments:

When I wanted to leave the house to catch the Eurostar to London, it rained so much that Mr. G had to drive me to the Station otherwise I would have been wet like a cat.

But then in London to my surprise the sun was shining ! I had to go to Victoria station to leave my luggage there for the day. Carrying a suitcase up and down the stairs there was no lift, was not an easy task and I told myself I will rather take a bus next time if it would happen again that I had to change the train for Eastbourne. 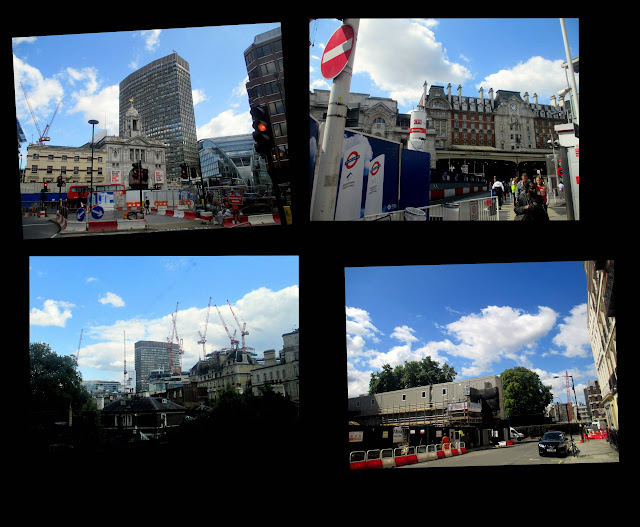 Around Victoria station was big a mess, two years ago it was bearable but now you need 10 GPS to cross the street and find a bus stop ! A real labyrinth ! And what they are constructing is so ugly, when I think what a beautiful old place it was a few years ago. There were works going on a little everywhere and I did a sightseeing for cranes ! I thought building glass boxes had stopped after the Olympic games, but apparently it goes on.

Then I arrived at Covent garden, a nice place to sit and watch people when the sun is shining. 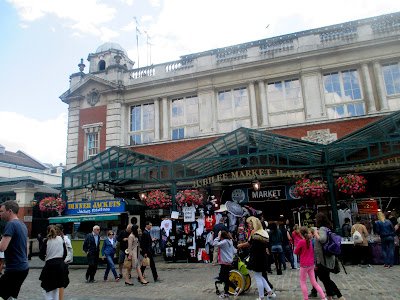 Of course thousands of people had the same idea as I. I bought a jacket potato with Cheddar cheese and found a chair to sit down. 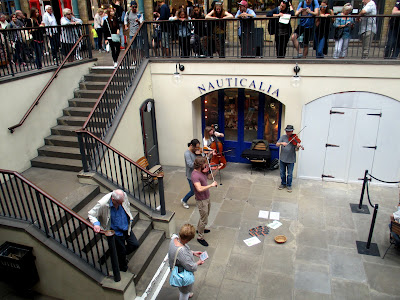 A group of young musicians played some classical music 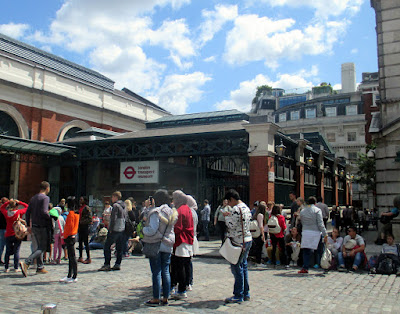 My intention was to visit the transport museum, but when I saw the crowd lining up, I thought it will be for the next time ! 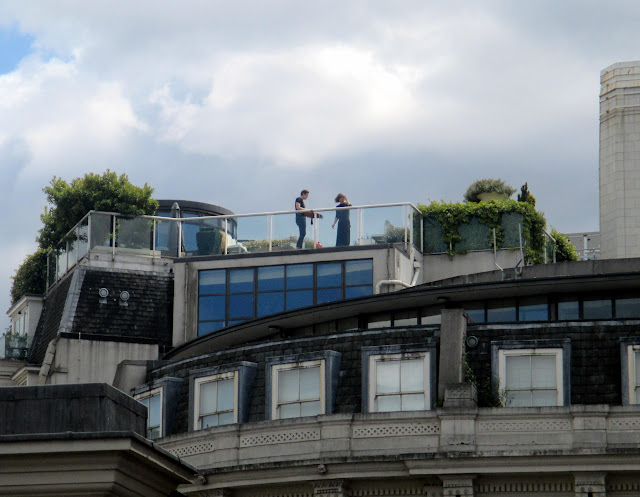 Looking up I saw this penthouse and wondered how much it would be worth, just overlooking Covent garden. Probably a fortune. Maybe it belongs to a company and this was the terrace for smokers. 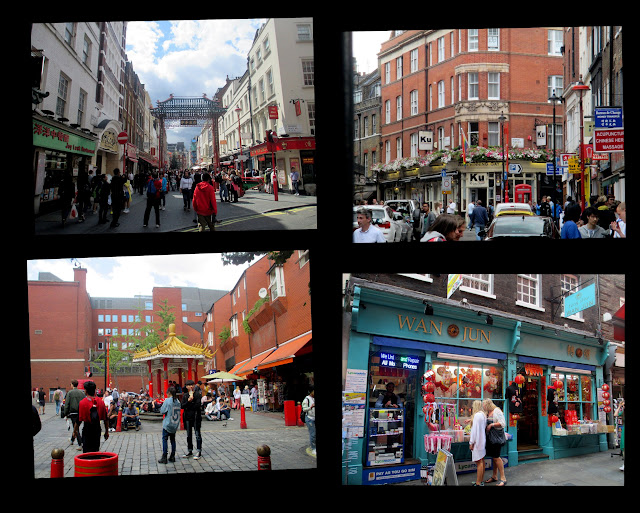 Leaving Covent garden and looking for a bus to take me back to Victoria station, I ended up in China town ! Most of the people were Chinese or maybe British Chinese. When they spoke I couldn't find out if they were just discussing, fighting or telling a joke.

Finally I found a bus, I love to sit on the double deck,  and do real sightseeing. In the tube I feel like a mole ! 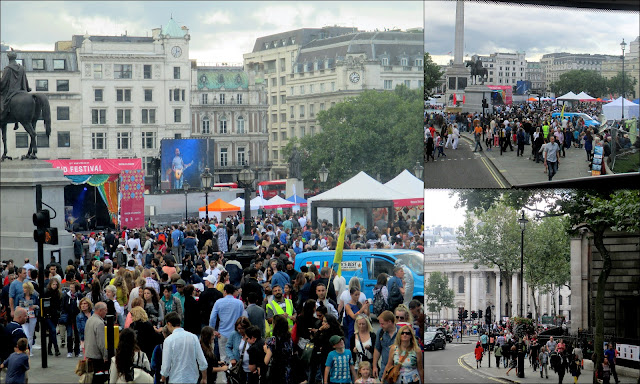 What I didn't know was that there was a concert on Trafalgar square and the traffic was completely congested ! Fortunately I just arrived in time to take my suitcase and caught the train !

My friend Doug picked me up at the station, and it was so strange to see him alone without Anne. He drove me to my hotel and an hour later he picked me up again to show me the renovated house and then we went for supper. The house looks so nice now with a new kitchen new floors and freshly painted walls Unfortunately she only could enjoy this for 3 months before she passed away. so sad.

On Sunday morning it rained cats and dogs and on top it was very windy. Fortunately I kept myself busy with blogging and reading !

I had intended to walk and sit down at the beach,  but the weather became worse and worse. So Doug picked me up at my hotel and we went shopping together and then stayed the whole day at home. A friend of Anne came over and we had a cream tea together and a nice chat. In the evening Doug cooked for me, he was so happy to cook for somebody and we had roasted chicken with Broccolis, cauliflower, roasted potatoes and carrots. It was delicious. Often we were talking about Anne and digged out funny memories.

Despite the terrible weather, after all we had a very nice day !
Posted by Gattina at 08:42 10 comments: