I started the week with a face cleaning. It's years I haven't done that and now I think I have to take a bit more care of myself, to do it for me as I have always done,  and not for others. Rick was always proud of me when I looked good and the people around him made him compliments about his "pretty" wife. And it's also better for me when I look in the mirror to see a human face and not a witch. And if Rick sees me from wherever he is, he will be also proud.

I came out of there with a red face but quite relaxed.

We had a wonderful weather when I went on an excursion to Lille/France to visit the museum Marcel Marlier, who had created the children book MARTINE especially for little girls. 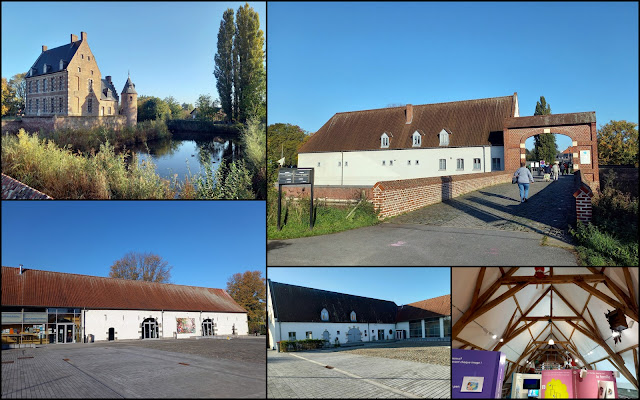 In this old farm the museum was located 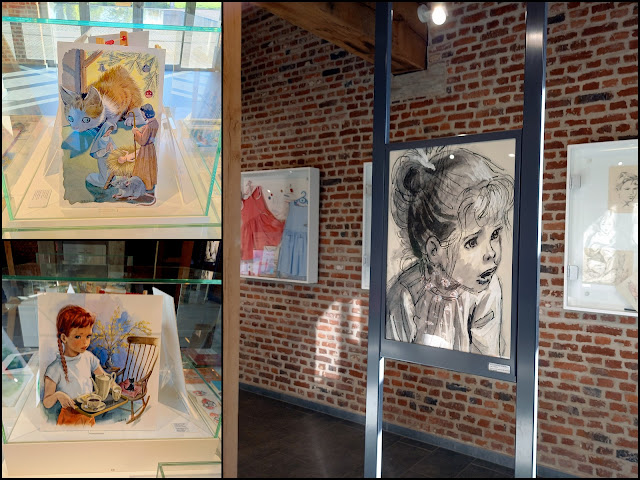 Of course you could see many original drawings of Martine, merchandising articles, and personal belongings of the artist. For me it was very interesting because he had invented a new technique of drawings involving photographs. Lots of my travel companions exchanged childhood memories of themselves or their children, being all brought up with "Martine". 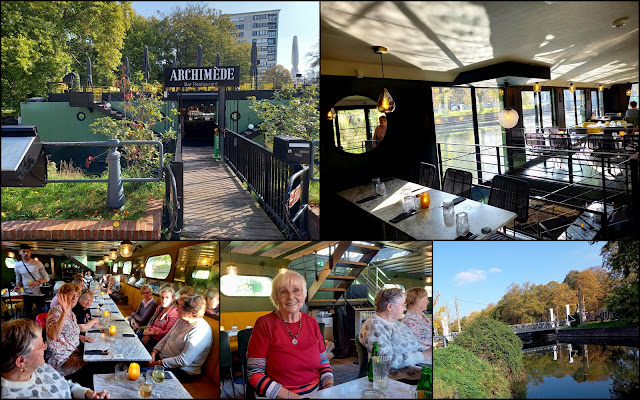 After that we drove further direction Lille and had lunch on a peniche with the name "Archimède". It was fixed to the ground of the little river, and had been transformed to a very nice Restaurant. There was "Carbonade" similar to Goulash with salad and fried, red and white wine, and then coffee with little cakes, which were delicious.
Then we drove for half an hour to the next destination  which was outside Lille. 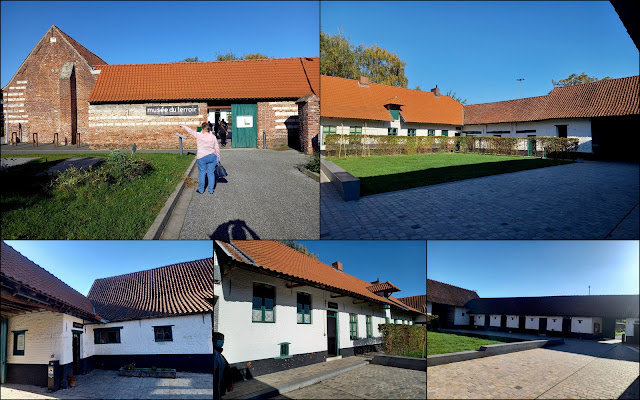 and visited the museum "Terroir à Villeneuve d'Ascq" which the family had taken over and transformed into a museum, to show children and young adults how people lived in the beginning of 1900. 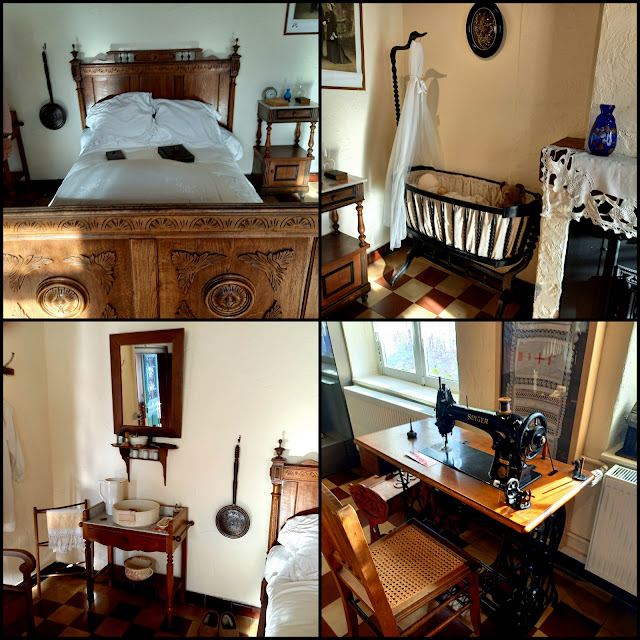 this was their bedroom with "bathroom" and craddle 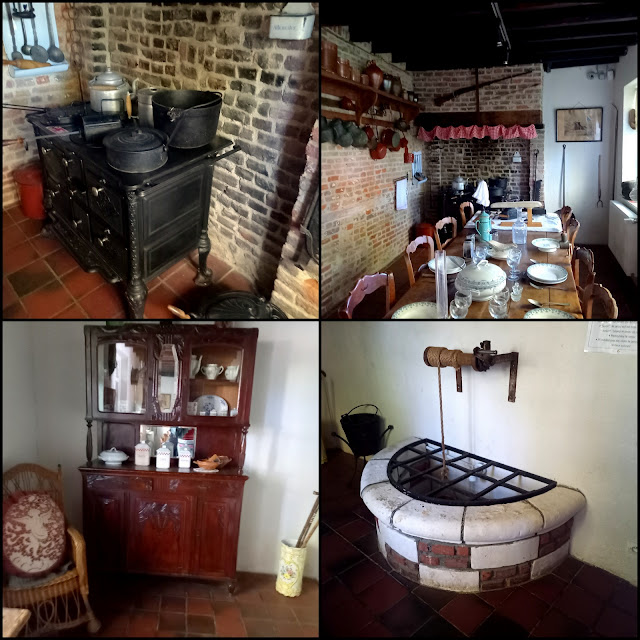 and the kitchen/living room ! Imagine to have to cook on this oven with these very heavy pots ! I remembered most of these things from my childhood when I lived with my grandparents on the country side.

My hair needed badly a cut and Adeline's too. So I took her with me and now we both have new heads and another week went by. 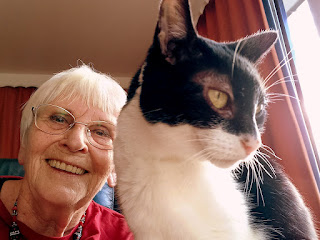 And for once Rosie agreed to do a selfie !

After the hairdresser we wanted to visit Nicole who had to move into a retirement home, the same where we had our painting classes.

She was just for one day in her room, when she got all symptoms of a cold. Of course they did a Covid test and despite her 4 vaccines, she has got the virus ! Now she is in isolation since nearly a week and the worst is we are not allowed to visit her and she is very depressed. For the first time she told me that she was going to die ! I tried to cheer her up and told her to think about all the travels we had made together, what fun we had with her dog, and that she is not allowed to leave me here alone now, that all the other "friends" have disappeared and I still struggle with Rick's death.

more participants at Susanne at Living to tell the Story.
Posted by Gattina at 09:41 11 comments:

1. What's something you wish you'd figured out sooner?

Possibilities to pay with your smartphone instead with a bank card ! I spent one week holidays at the English South-East coast with 50 £ cash in my purse, because I had forgotten my cards !! Fortunately Hotel and breakfast was payed ! It taught me a lesson, even with such a small amount I spent wonderful holidays !! and I learned to calculate again !

2. Something from childhood you still enjoy today? 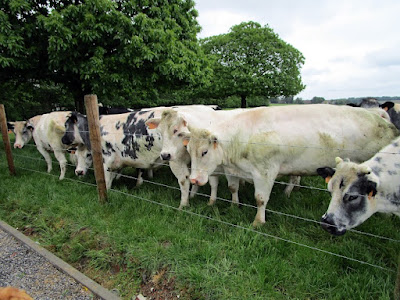 3. Are you a fidgeter? What's the first thing that comes to mind when you hear the word fidget?

My son ! Baby, toddler, teenager, man, he never kept quiet. It's getting better with the age but he used to always have other things in mind.

4. Your favorite fall vegetable? How do you like it prepared?

I don't have a special fall vegetable. I like all vegetables and eat a lot the whole year long. Maybe Brussels sprouts, that I wouldn't eat in summer !

5. What's something you find mildly annoying, but not annoying enough to actually do anything about? Might you now?

Household scores and not only mildly !

Yesterday I visited an old farm from 1900 and something and think the ones  who talk about the good old times and that everything was better, I shook my head when I saw this 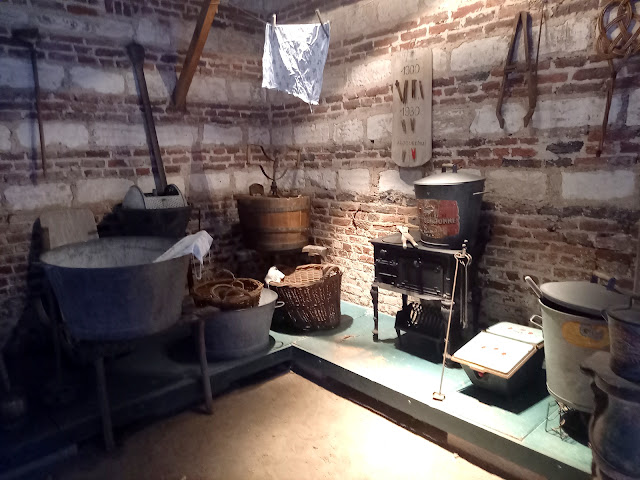 It took at least one day to wash the clothes ! Today you push on the button of your washing machine and then go back to the book you are reading or to the TV and continue to watch the movie you started ! 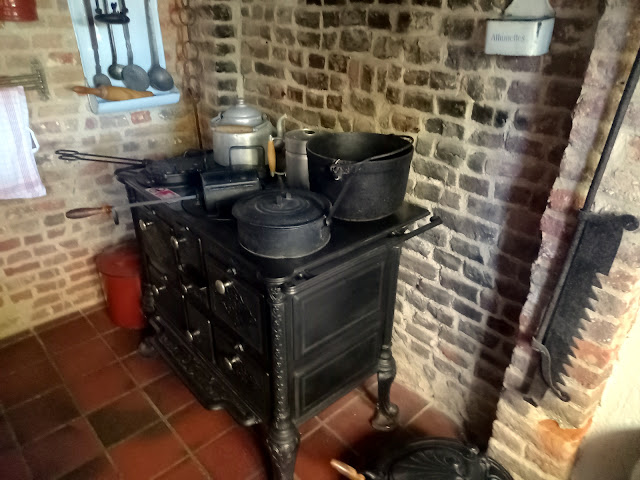 Or to cook for a whole family on this oven with these cooking pots ! You have to get up at 6 and start your tomato sauce ! 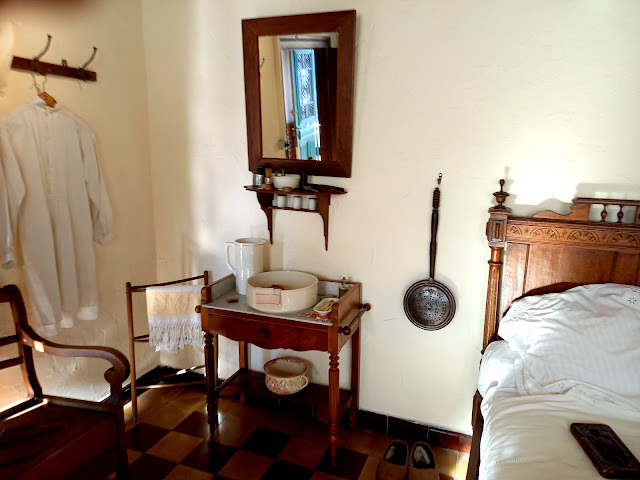 and when the day is finished clean yourself and put the p...pot under the bed, just in case ! 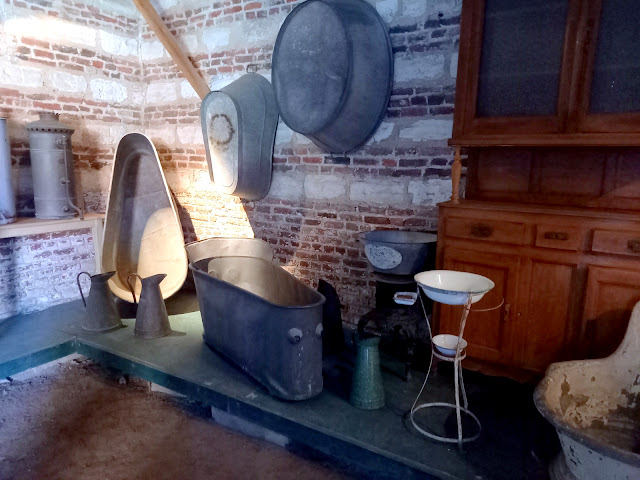 and once a week you could take a bath ! But first  heat the water, carry it to the bath tube and put it in !

I thought how lucky am I not to have lived at this time, but my grandparents did !

It was a nice excursion into the past, it was very well organized and we saw this farm in Lille/France. 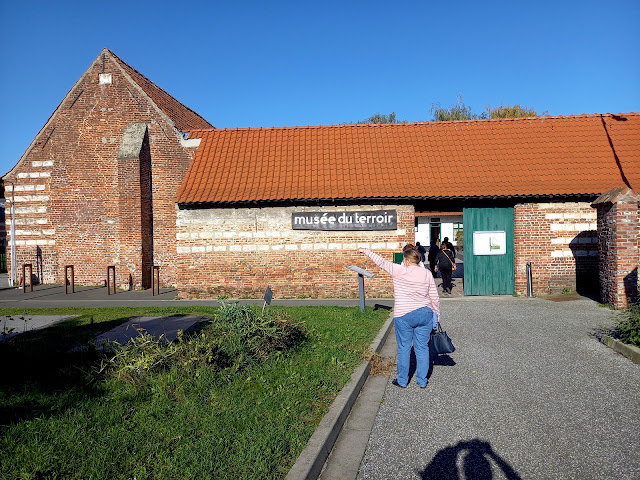 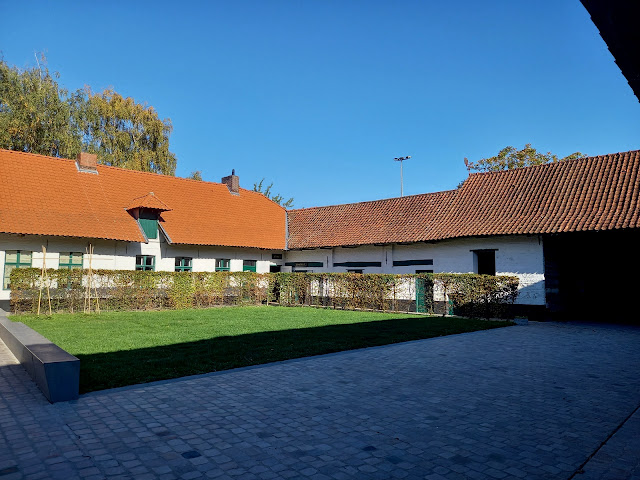 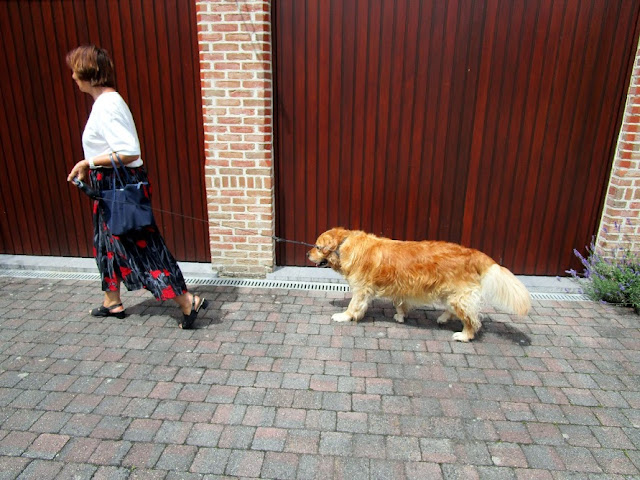 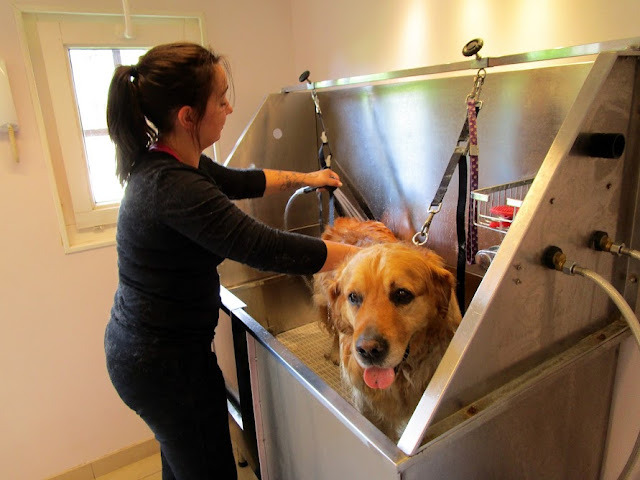 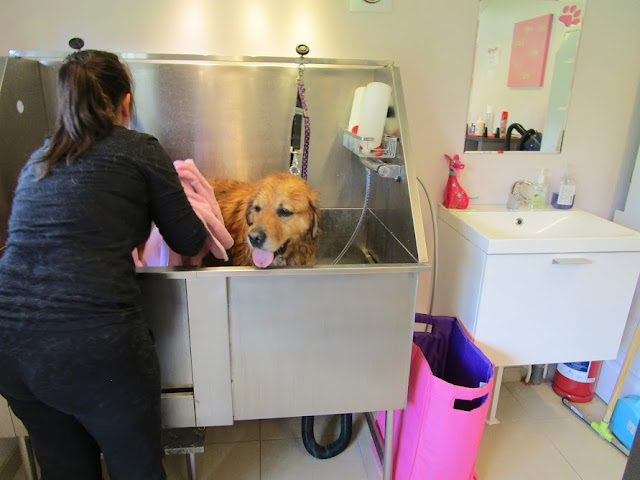 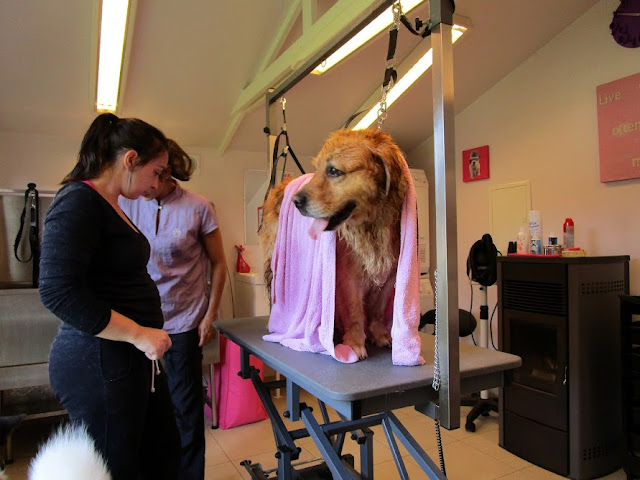 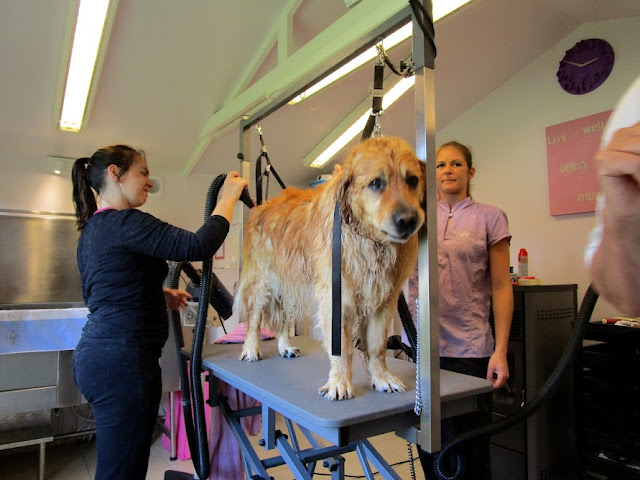 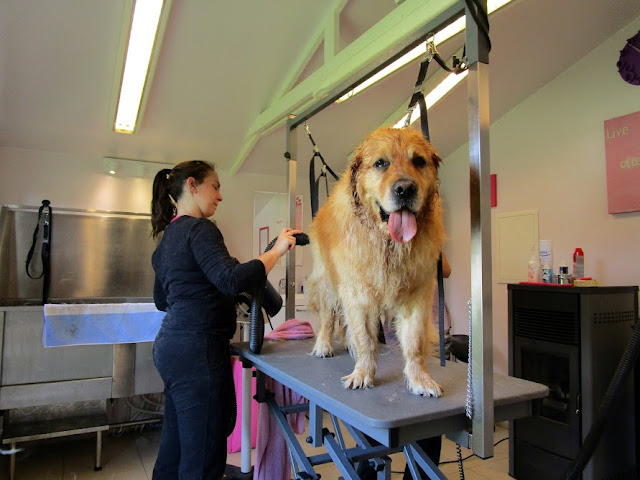 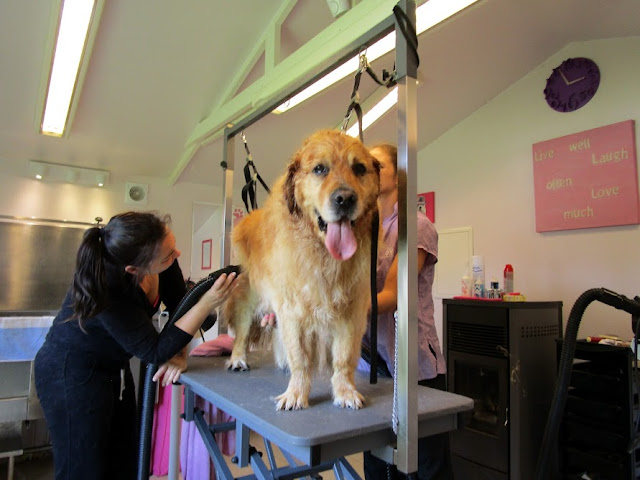 who wants to be beautiful has to suffer ! Charlie the Golden Retriever 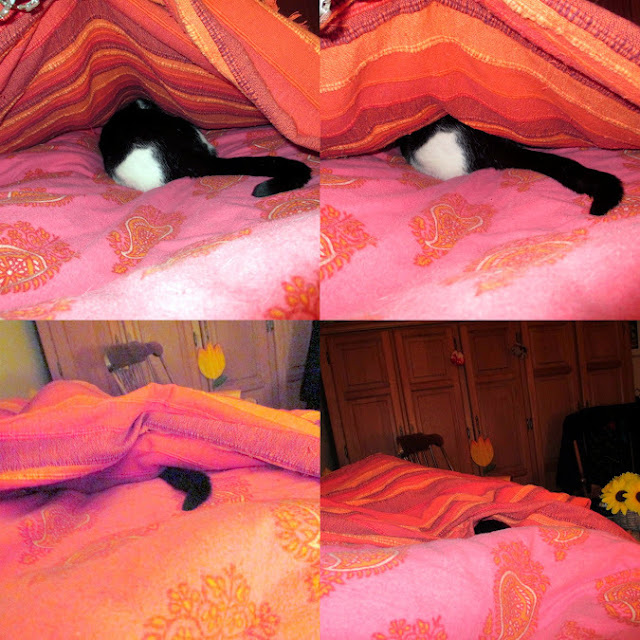 Saturday it rained and I was quite happy not to have to go out. My neighbor from the second floor came in the afternoon to pick up the theater ticket that I had bought for her. Then we started to talk about theater and what we had seen, and stated that we had lots of things in common. Even our husbands had the same disease, Parkinson, and she too had moved in this building for the same reasons than I. They also had sold their house and moved. He died three years ago. In a way he was more lucky, because he had a heart attack and not the bitter end of Rick, loosing his mind and waiting that his heart finally stopped beating.

It was a very nice afternoon and we decided to continue to go together for other plays. Our building is so nicely located that we could walk there. We have everything in walking distance around us, all kind of doctors, a vet, the police, the city hall, the theater, the cinema, a medical center and a gallery with very chic and expensive boutiques, (which closes one after the other due to the economical crisis, and are replaced by others) 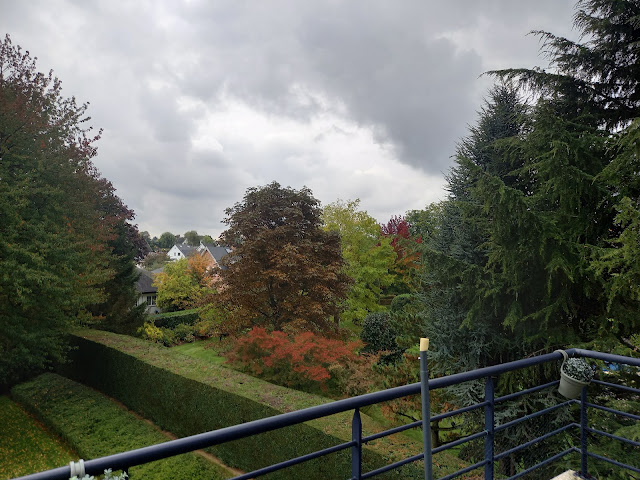 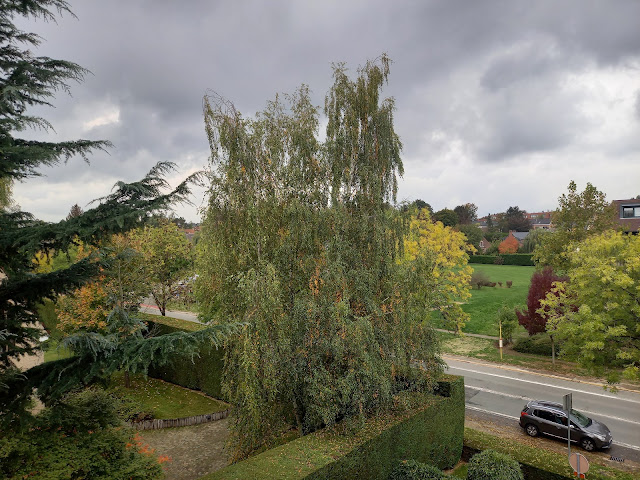 and when we come home we have this view out of our living rooms. As you can see the trees are not yet very colored.

I also went for an annual check up to the eye doctor and was happy to hear that everything was OK. When I had to pay, he didn't want to be payed with a bank card, but either cash or with a scan app in my smartphone. I had never seen or heard about that, so he showed me and it's great. A pity I didn't know that before when I was in England on holidays and had forgotten all my cards at home ! In short, go to your eye doctor and he explains you the apps on your smartphone !

I connected or she connected with me with a lady, living just in the next street, we know each other from our Facebook meetings "Live in Waterloo" ! She loves to go to the cinema and asked me if I wanted to come with her. Of course I wanted. The cinema in Waterloo is rather small but cozy and cheap and the seats are just a dream. You feel like home ! 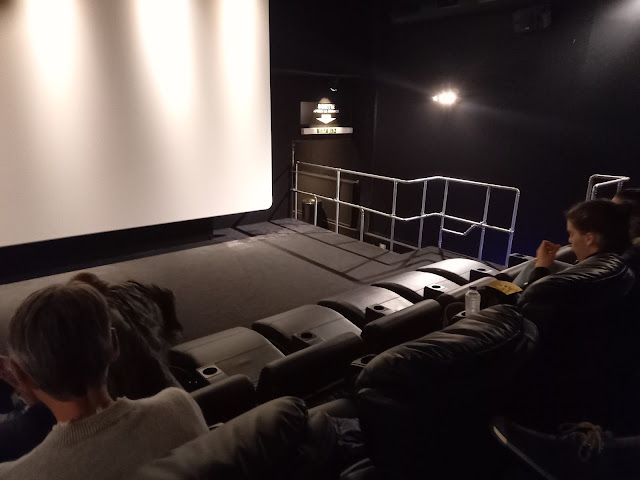 The film we watched, was very moving. The story of a 92-year-old lady who gets into a taxi in Paris and asks the 42-year-old taxi driver to drive her through Paris to all the neighborhoods where she used to live, telling her very interesting life along the way. The first very grumpy driver changed completely during the long lasting trip. You not only had a sightseeing tour through Paris, but also the difficult and interesting life of the old lady describing the old Paris and the reactions of the young man. Film music was also beautiful all American songs from the end of the 2nd world war. When the film ended, people stayed on there seats, I had never experienced that and we both also had difficulties to return into our real world. 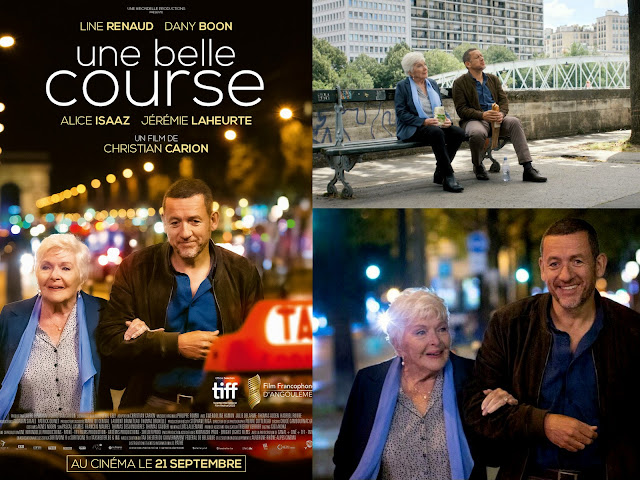 It was one of the most touching movie full of tenderness without falling into cheap love stories. For once a French movie was excellent.

After the movie we went to Rick's favorite restaurant "La dolce Vita" and had an Italian meal, which was very good. Most of the guests had done the same as we, first movie and then supper ! I had spent a nice evening since a long time.

On Sunday, spring break out ! We had 19° and the sun was shining as if payed for. I was very tired and had slept until nearly 10 am. Therefore I didn't do much, a little film on TV made me fall asleep again, cat Rosie who had "worked" during the whole night had put all her toy mice around her food bowls and she was very tired too. This night she probably be fresh like a rose and turn the rags upside down.

I wrote this post and then went next door to Adeline who wanted to know how the movie was, and then regretted that she hadn't come with us.

Tomorrow a new week starts, it's terrible how time flies by ! 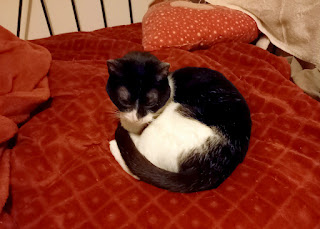 Waiting for me to come into my bed !