The week started with very hot temperatures, although officially autumn had started. We couldn't scrabble outside it was far to hot, but later we had ice cream and coffee on the balcony which fortunately is  large enough for five people !

Because of our move we had to go with our identity card with the new address to the bank to have it changed there too ! Now that we are nicely settled down, the paperwork starts, which I hate now although I did paperwork my whole life ! There was the Electricity and gaz, and water transfer. With the electricity company I had a lot of troubles because for 3 months they sent one invoice with the prepayment to the old address and one for the new address which didn't make me happy at all. And as it always is, in big companies the left hand doesn't know what the right hand is doing, nothing was done. To call them now in Corona times is almost impossible, you stay for hours on the phone and of course there is no email address, Corona is a good excuse that nothing works as it should !

I had the visit of my ancient neighbor, I hadn't seen her since 3 years, she had moved out, had married a guy who was mentally sick, had to hide and stay with her brothers every second day, because he wanted her back. After 3 months she was able to rent an apartment and now she is finally getting divorced ! A terrible story.

We were very happy to see each other again, we had been neighbors for 15 years and had done a lot together, travels, theatre etc. He had sequestered her and she was not allowed to see her friends and the family only with him. Unfortunately she was so blind that she did everything he told her. But now it's over and we start our friendship again.

I ended the week with a birthday ! Unfortunately now autumn seems to have arrived, and it is rather cold and it rains.

We were 8 to celebrate our friend's birthday and Mr. G. was the only rooster between the 7 hens but that didn't bother him! The cake tasted too good !

We ate "the French way" which means we stayed at table from 1pm until 5 pm ..... eating and drinking ! 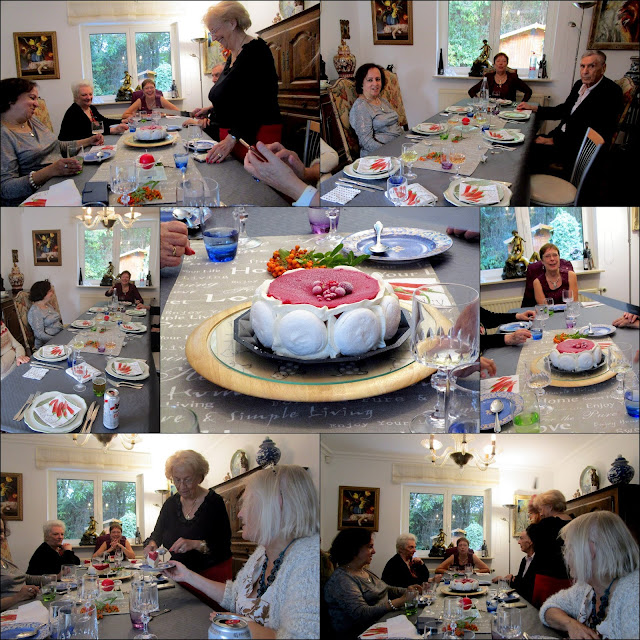 There was a starter, a Turkish salad with olives, wild rice and cheese cubes

The main course was a self made Lasagne, which tasted very good but it was not Italian at all. I had to think of my sister in law, she probably wouldn't have recognized that we ate Lasagne. Didn't matter.

Then came the desert a French speciality, a cake with meringues (photo in the middle)  unfortunately I forgot the name ! It was so good that we ate two cakes !!

After a nice cup of coffee and some more little chats, we finally left after 6 !

Of course we couldn't eat any supper we were still full ! I just ate an apple and Mr. G an ice cream.

My friend has beautiful old chinese vases and also Japanese items, she is the only one who has kept her furniture and decoration since the first day of her marriage, while we others have all changed to light and more modern stuff and no antiques or oriental carpets anymore ! The younger generation doesn't want these precious things anymore, so they are hard to sell !

I wonder if tomorrow I have to turn on the heating, and hopefully it works, it's a gaz central heating and we had a completely other system ! I read the notice and as usual I didn't understand a thing ! I will see tomorrow ! 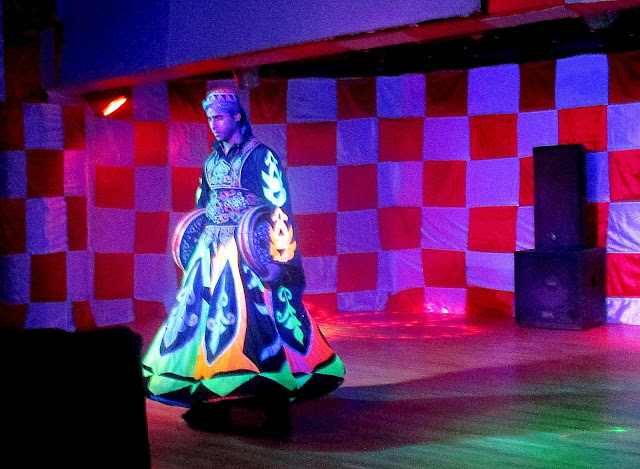 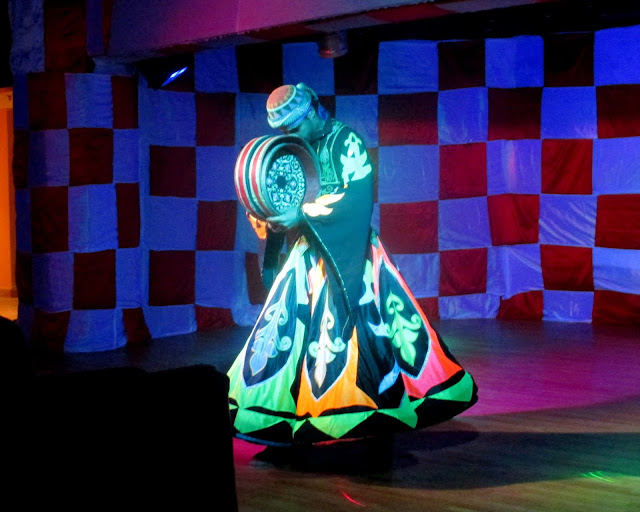 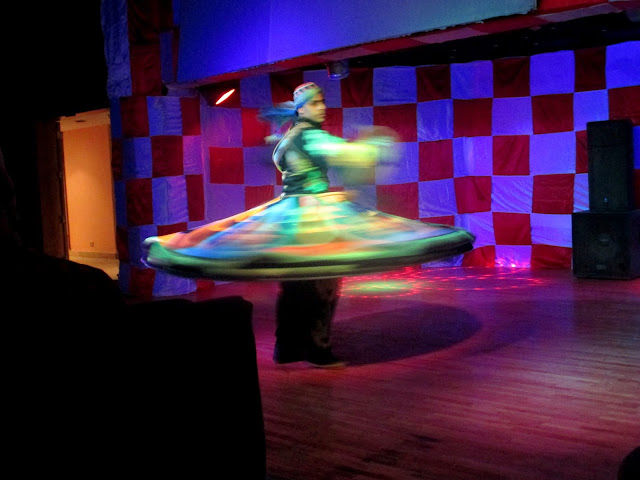 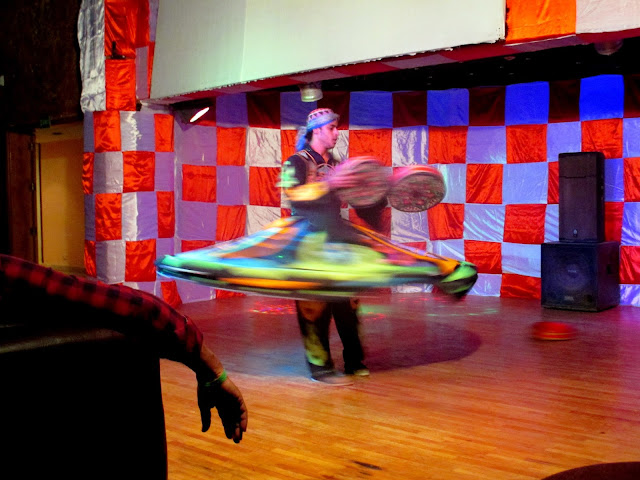 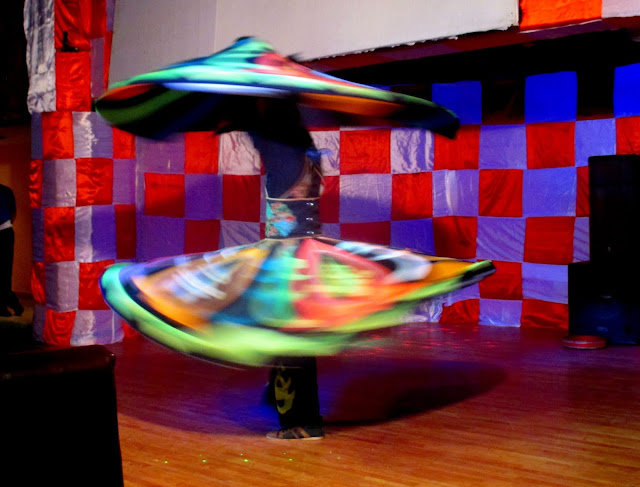 The whirling dance is a form of meditation, a way of connecting with the cyclical nature of life and the universe in order to reach a higher plane of spiritual consciousness. In Egypt, dancers perform a folkloric dance known as tanoura, based on Sufi whirling dervish tradition.

Whirling Dervish, show in my hotel in Egypt

more participants here, and Image-in-ing
Posted by Gattina at 08:00 10 comments:

In 2006 while I stayed in Egypt, I took a one day excursion to visit Petra in Jordan. At that time it was not very well known and therefore there were not a lot of tourist accomodations. The locals were still living there and observed the archeologues who digged out all kind of stuff ! And they sold antique bits and pieces they had found themselves  to the tourists. I have no idea how many vases and potery has disappeared this way.

I will always remember the long cobbled way through wild looking rocks and then suddenly standing in front of this miracle !

The long, long way, you had to walk or rent a coach which were more for goods then for humans. 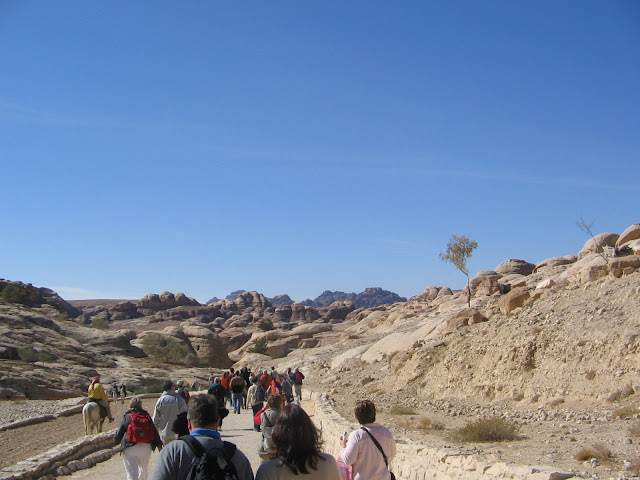 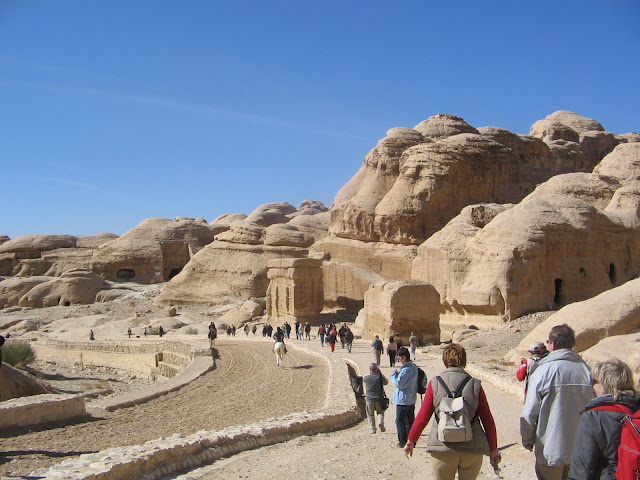 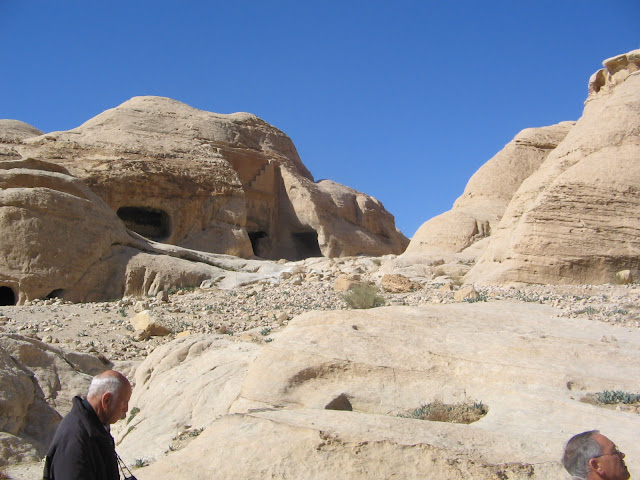 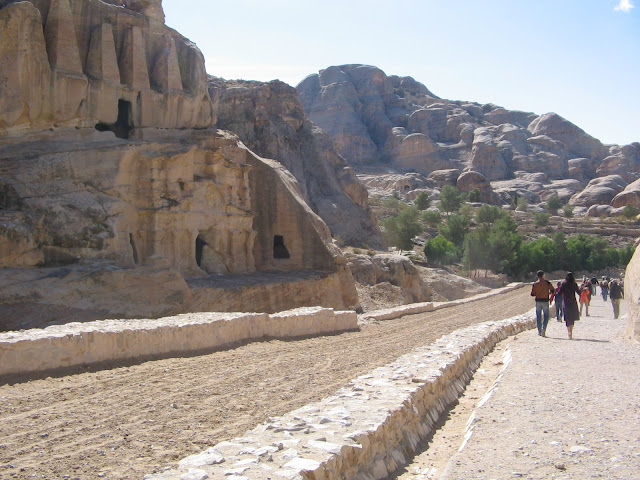 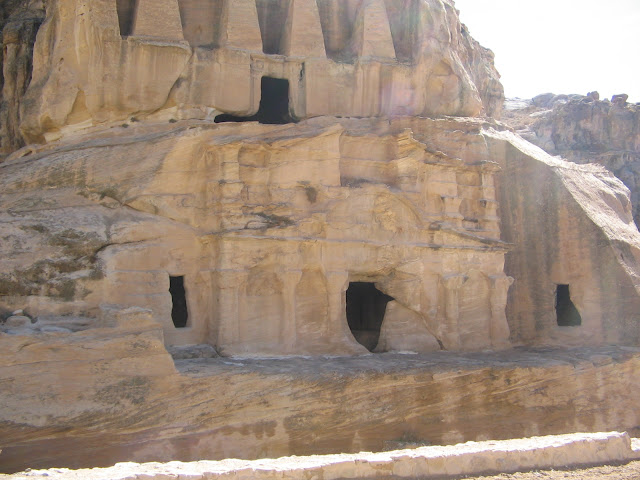 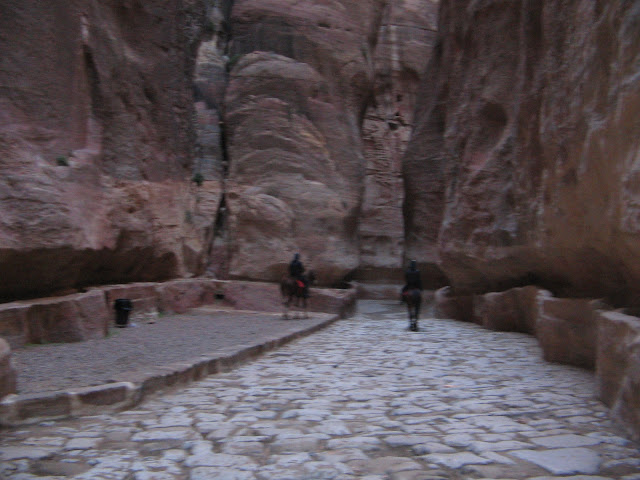 hard to walk on these cobbles !! 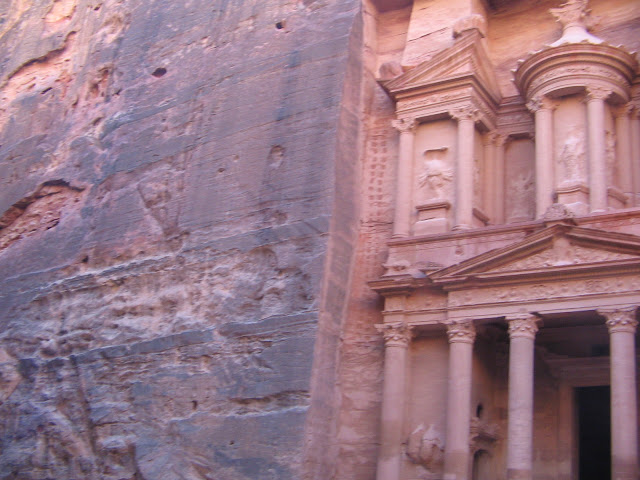 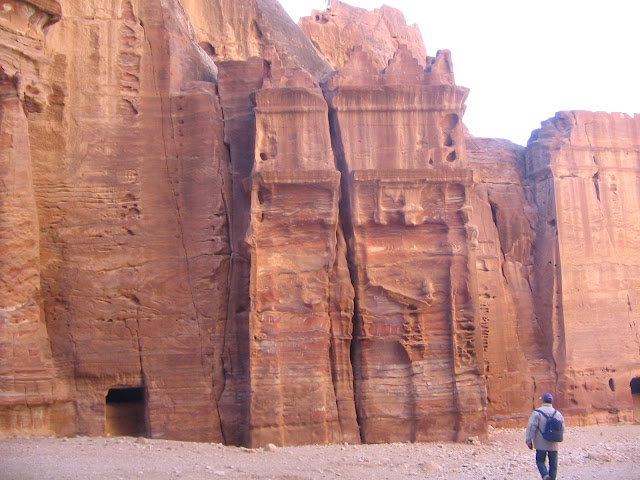 and here it started : suddenly the rocks were finished and you could see this amazing building ! Unfortunately you couldn'tgo inside yet, I don't know how it is today 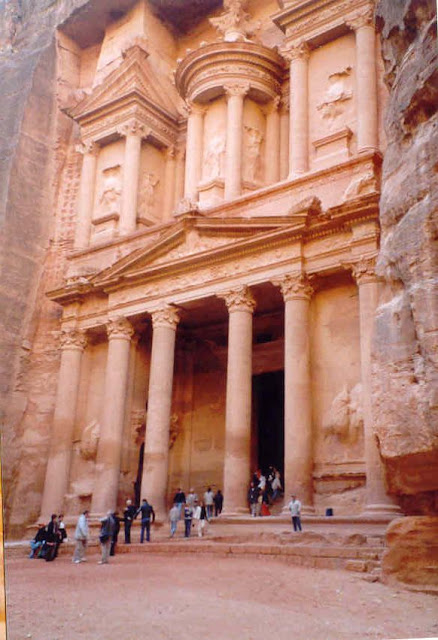 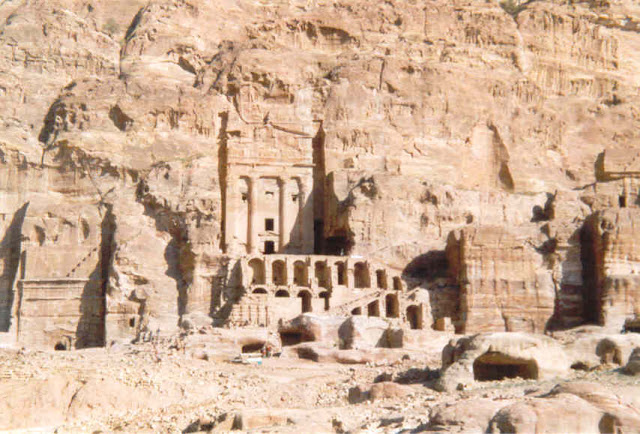 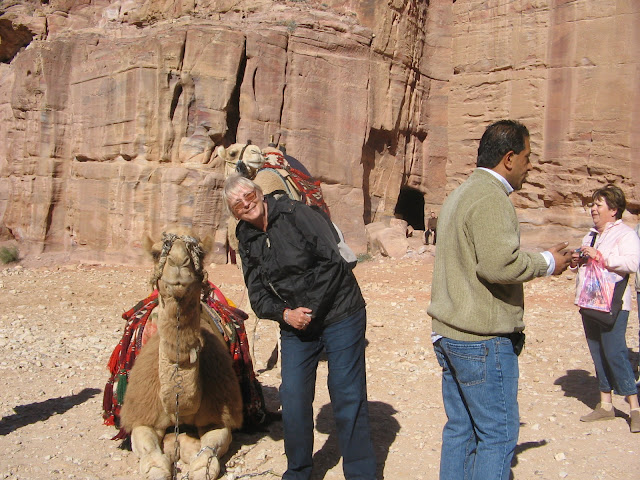 This is me with my favorite animal ! You can read the whole story of Petra in my travel blog Countries & Cities 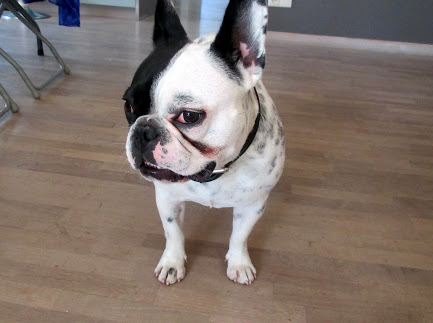 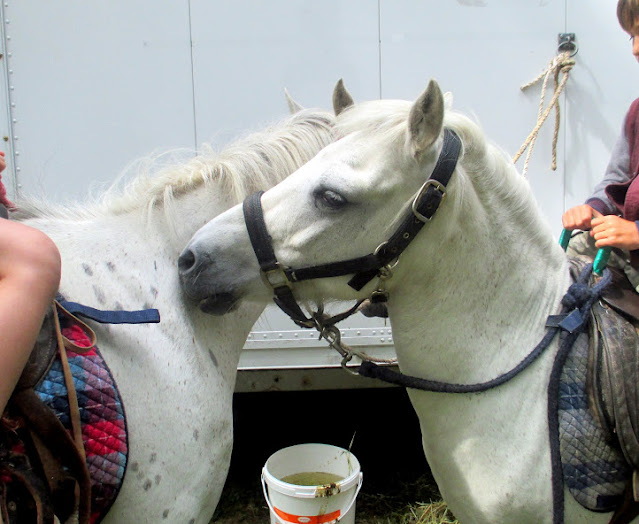 Whisper in my ear 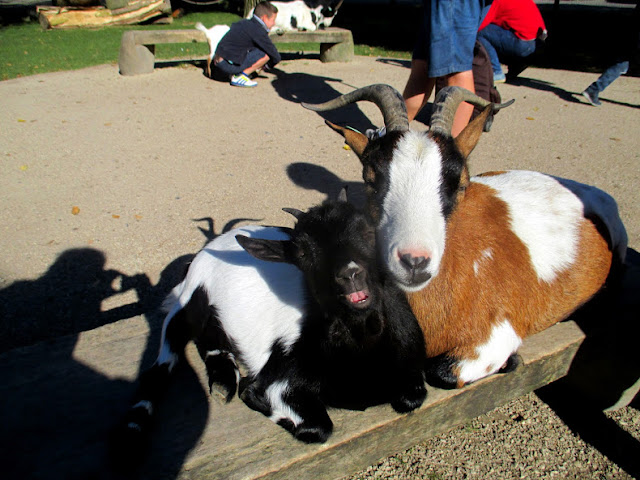 On Saturday I had to pick up some paintings from my ex-neighbor, and a basket. There are still paintings remaining, but I think I will manage to put them somewhere invisible in the apartment and also in our little basement. Then I went across the street to the house where I had lived for 45 years ! Our old fashioned mailbox had disappeared and was replaced by a black modern cube ! The front garden had been cleaned and the old doorbell replaced by a video camera ! The now owner Antonio opened the door, let me in and showed me around.

If it wouldn't have been so unpolite I would have kept my mouth open the whole visit ! Except the bathroom every room had been redone and looked absolutely beautiful ! Not at all my colors or taste, but I had to admit that the decoration, and furniture of the rooms where very beautiful. I have to take some pictures, I think nobody will recognize our old house ! The new owners are really very nice people and he told me that I can take as much photos as I want !

Then I returned home and spent the rest of the aftenoon on our terrace with my computer and wrote my posts and answered emails. In between I saw little squirrels running around chasing each other on the lawn or climbing up the trees ! I really didn't need a TV I had an animal show life !

Sunday we both woke up tired and without any energy. After his breakfast, coffee and 2 wafels Mr. G. returned to bed, he felt dizzy. I didn't know what to do with myself so I did nothing, just surfing the internet a bit for chairs, then we had lunch, I watched a bit TV and Mr. G. returned to his long lasting nap !

Fortunately Nicole and another friend came to see my doll house, and then we sat on the terrace, had ice cream and coffee and chatted together. It was a very nice afternoon !

Sometimes I wish they would let us do what we want, or at least each person decide for himself, but then they say we are a danger for the others, and the others do they think that we are a danger ? Is it right to close the borders there are human beings on both sides ! A border is not visible unless you put a fence around the whole country. Now we have a lot of infected people, so what, if we are all infected, but have no other symptoms and feel good then so should  it be. There are less and less people in hospitals, they stay home in quarantaine, less and less in intensive care, and less and less deaths ! I think that is a good sign, even if more people are infected, more tests are done too ! 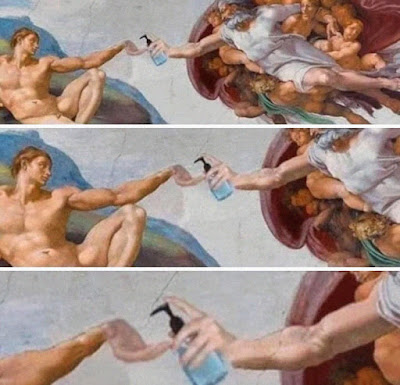 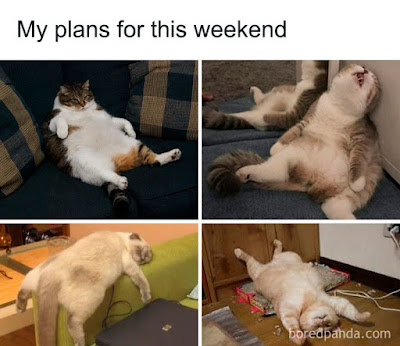 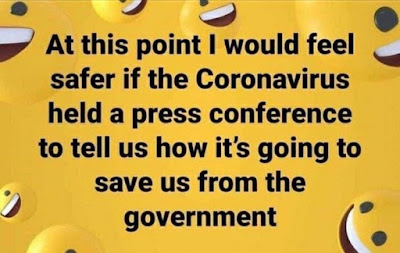 Try to take it with humor !