When our friends from Southern France, Claudie and Pierre, came to visit us they wanted to try out as many different Belgian beer sorts as possible without of course dancing on the table or falling under ! We managed to have them tasted 10 different sorts of beer in 4 days !

Beer in Belgium, dates back to the age of the first crusades, long before Belgium became an independent country. Under Catholic church permission, local French and Flemish abbeys brewed and distributed beer as a fund raising method. The relatively low-alcohol beer of that time was preferred as a sanitary option to available drinking water. What are now traditional, artesinal brewing methods evolved, under abbey supervision, during the next seven centuries. The Trappist monasteries that now brew beer in Belgium were occupied in the late 18th century primarily by monks.  The first recorded sale of beer (a brown beer) was on 1 June 1861. (more to read about the history of Belgian beer is here) 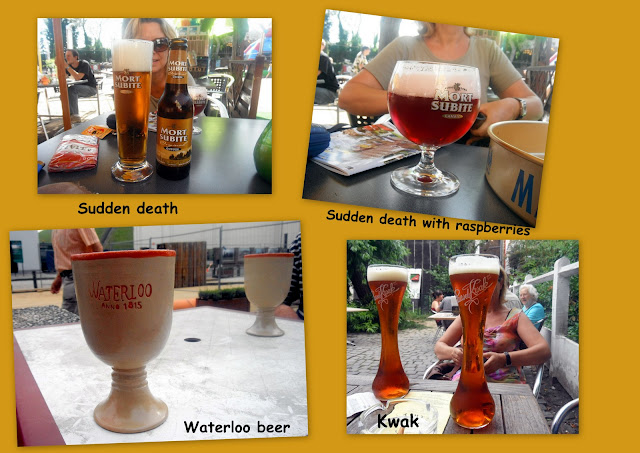 These once were as strong as a good wine. Of course the Belgian drinks as much wine as the Frenchs, but they have to import it. To my knowledge, no wine is produced here. 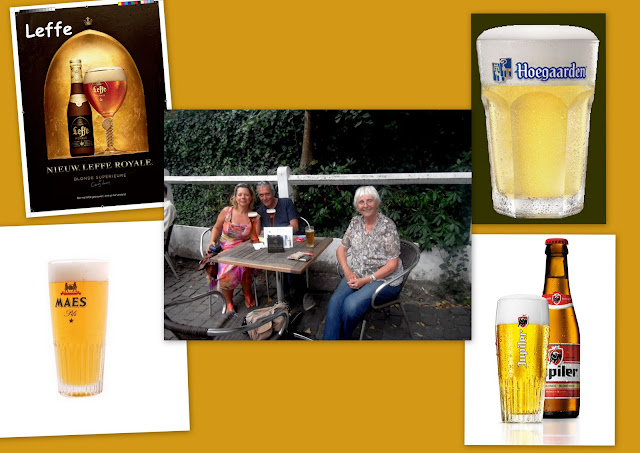 These once besides the one on the top left are so called "table" beers (bières de table)  and are drunk during meals. They usually don't contain more alcohol than 4 to 5 % while the others can contain up to 12 % or more. 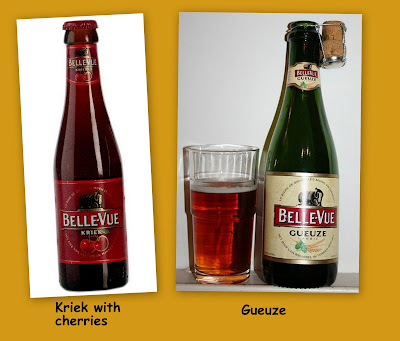 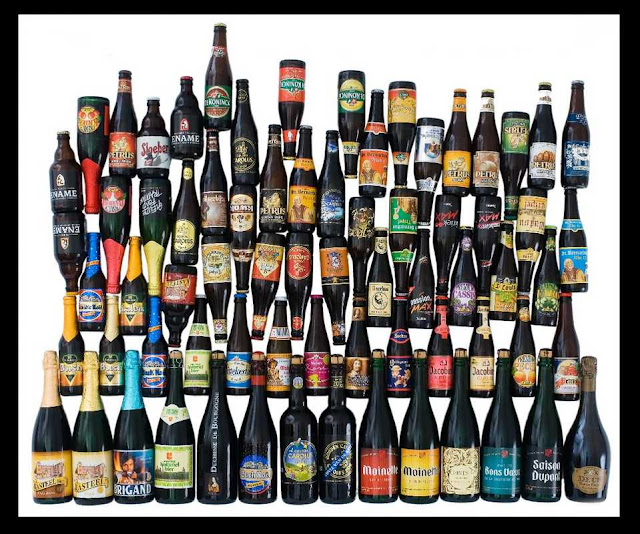 and if you want to get really dizzy here is a list of all Belgian beers (apparently 2442 !)
Posted by Gattina at 06:00 6 comments:

1. I went swimming again, and had a "fight" with a bald human elephant in his late 50th, the line which is reserved for acqua gym and people who swim peacefully up and down the line, he used as a training line for the Olympics and splashed and kicked everybody. When he kicked me hard for the second time in my arm, after having told him politely to please pay attention to the others and I got the second kick, I told him that if he wanted to play a human walrus and splash around and kick people he should go into the line where swimmers do their training. He gave me a killer look, but went out ! That way I could swim again peacefully in my grandma style.

2. Ilona and I hadn't seen each other since our French friends left so I drove over to her and we chatted in her garden about family and friends and nice and bad guests, and a lot more, it took us the whole afternoon !

3. My cleaning lady is finally back from Poland and brought me this cute mug, she was happy to be back again, at home she has even more to do. Her friend who had replaced her had put the whole household upside down, when the first time I told her what to do, she made it clear, she did it her way. Mr. G. wasn't very happy about that and escaped for the whole morning. I only checked when she had finished and the result was perfect. So I didn't care, after all it's the result which counts. 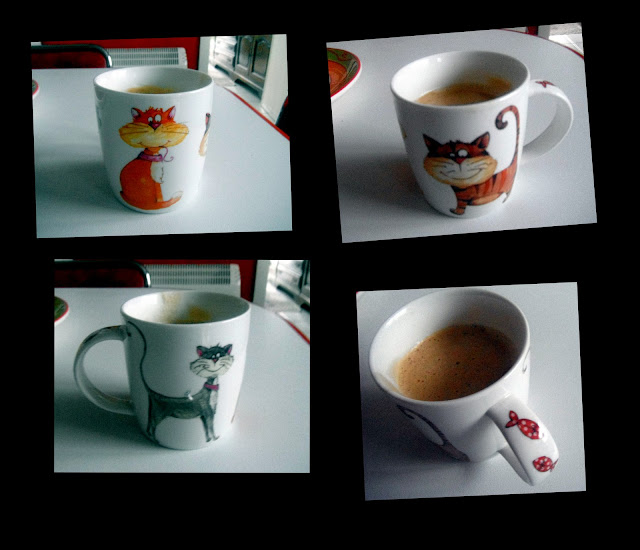 4.  Mr. G's friend seeing a 4 year old picture of me told me that my glasses were nicer at that time, and indeed when I looked in the mirror, mine had become used up and suddenly looked awful. 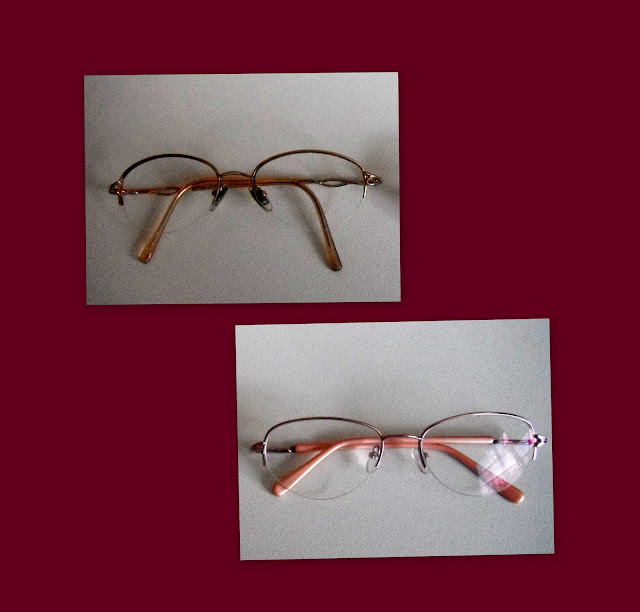 the old and the new

as I was in shopping mood, I went for a new frame, fortunately my glasses hadn't changed because they are very expensive, in 5 min I had found a model which fitted with my glasses, and one hour later they were sitting on my nose ! 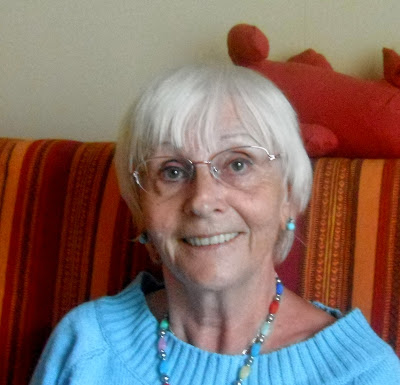 Maybe there is not a big difference, but at least I feel better !

4. My son announced his visit for this weekend with grandson Toby. Mum has a bad cold and needs some rest. 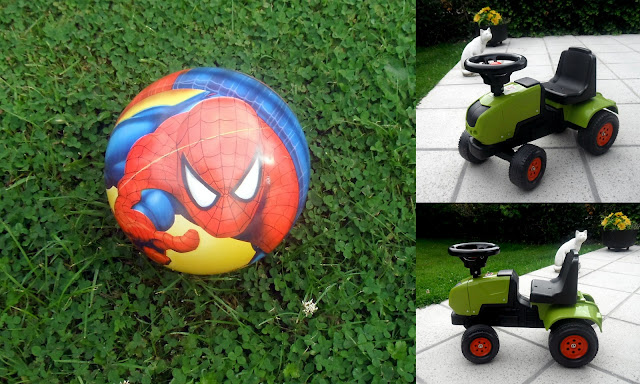 and as the weather will be not too bad I thought that the poor child has nothing to play with outside ! In my shopping mood, I bought this little tractor, but before I asked a young mother if her 3 year old boy could try it out for me (he was quiet short and Toby with his nearly 2 years is tall) First he didn't want but then he climbed on it and it was a drama because he didn't want to get off the thing ! So I thought it must be the right size and thing. I also bought a ball so that Nonno (grandpa) can exercise his old bones a bit.

5. Now that I have rediscovered the Waterloo swimming pool, I go there almost every day. I feel good after that, so good that after lunch while I was watching my little German crime story series, I realized that I had fallen asleep, and the case was broken ! I couldn't even do rewind, because I knew the murderer ! It just was time to go to Ilona's mother who also lives in Waterloo, she is a "young" lady of 88 and the 3 of us had coffee together and a lot of laughter  ! She is a very witty lady, imagine two years ago she went on a roundtrip through Jordan, Egypt and Israel !! I decided to take her as an example !
Posted by Gattina at 06:00 10 comments:

2. A good neighbor is the one who makes noise at the same time as you

3. A little village is charming because neighbors are watching over your wife

4. If you are not happy with your neighbor move your house

5. It is easier to love people in general then to love your neighbor

6. To make peace you have to be two, yourself and your neighbor

7. If you want to live in peace with your neighbor, don't have any

8. Never kiss your neighbor's wife unless he does the same with yours

10. A bad neighbor is a calamity, a good neigbor a real treasure

11. Appels in neighbor's garden are the best

12. We make our friends, we make our ennemies, but god makes our neighbor

13. A hedge between neighbors preserves friendship 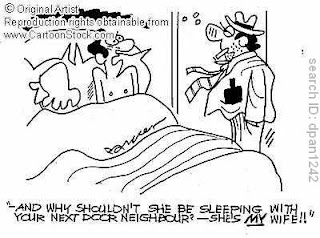 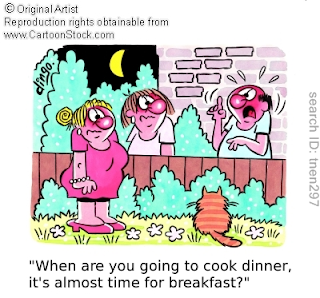 That's me and my neighbor friend Dominique !
Posted by Gattina at 06:00 15 comments: 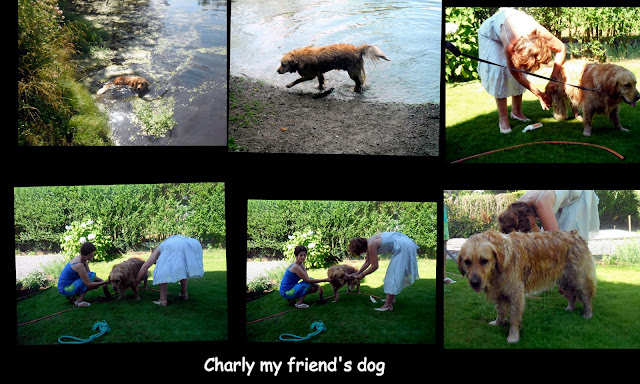 Want to see the important buildings of the main cities in the European Union and its countries in a little more than an hour ? then read here
Posted by Gattina at 06:00 No comments:

When our guests from Southern France where gone, I was surprised that I wasn't that tired as we have visited a lot this last day ! As it was so hot and I didn't want to move anymore I sorted out the pictures I had taken the day before. 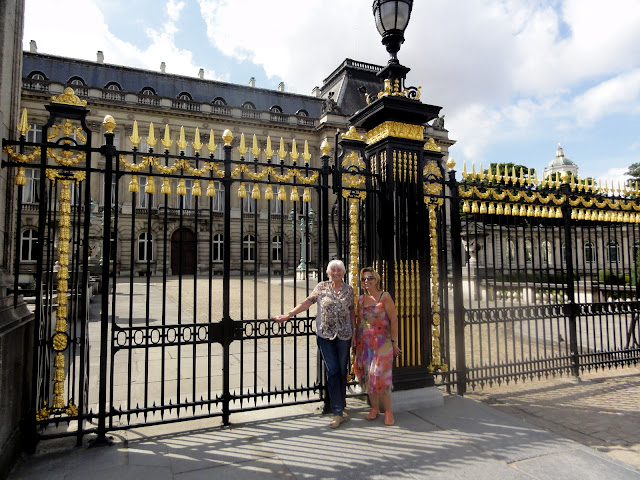 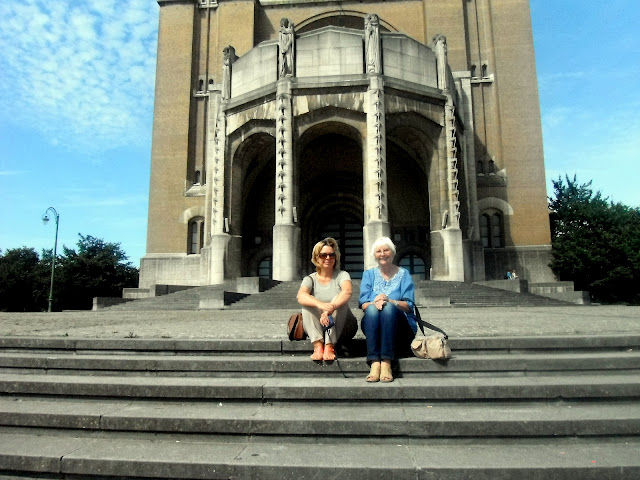 Then I drove to the other side of Brussels to visit the Basilica of Koekelberg on Koekelberg hill, which is a landmark on the Brussels skyline. It is the largest building in Art Deco style in the world 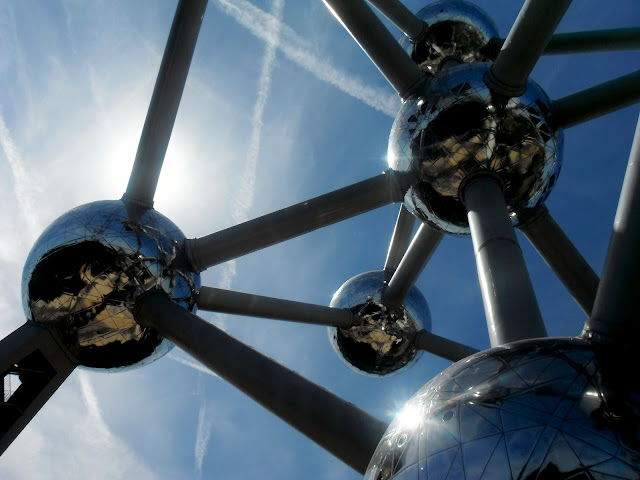 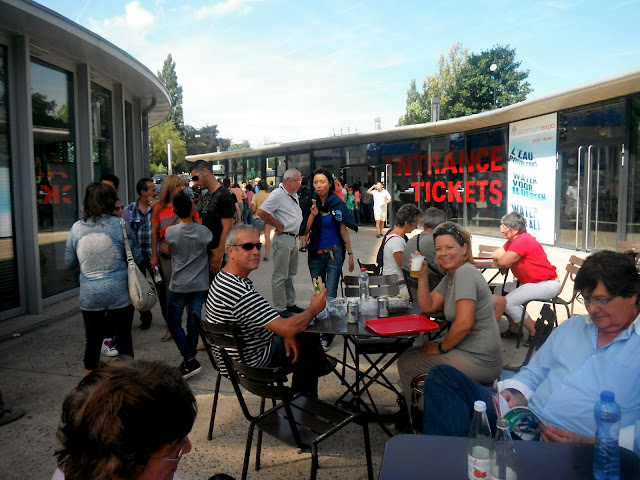 From there we visited the Atomium and had lunch under the huge balls. 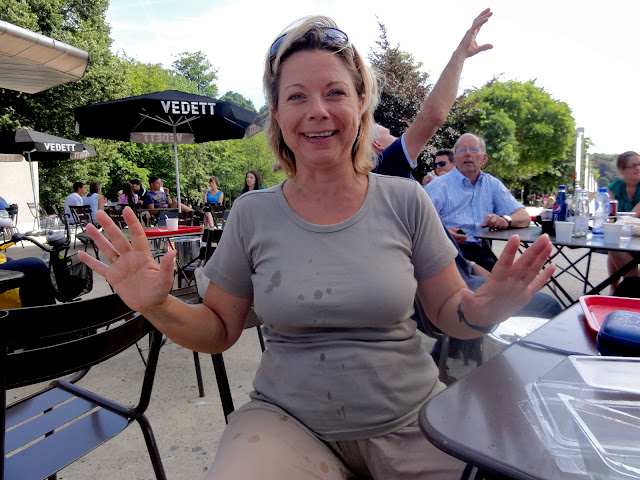 While talking with her hands Claudie spilled her beer over her t-shirt which caused a lot of laughter ! 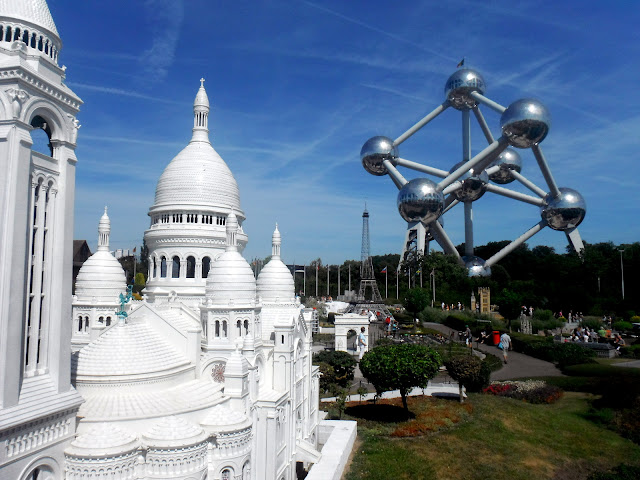 After our little break we went over to Mini Europe, and "travelled" through 28 European countries in about 1 1/2 hour ! Here you see Paris and the Eiffel tower, just under the real Atomium ! 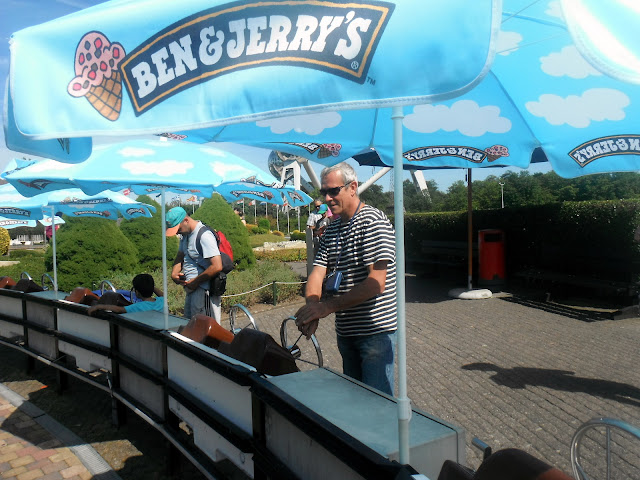 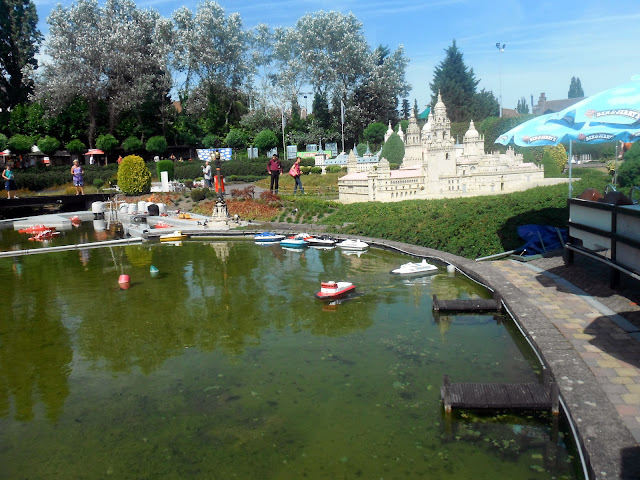 Pierre tried to drive a boat somewhere in the Netherlands 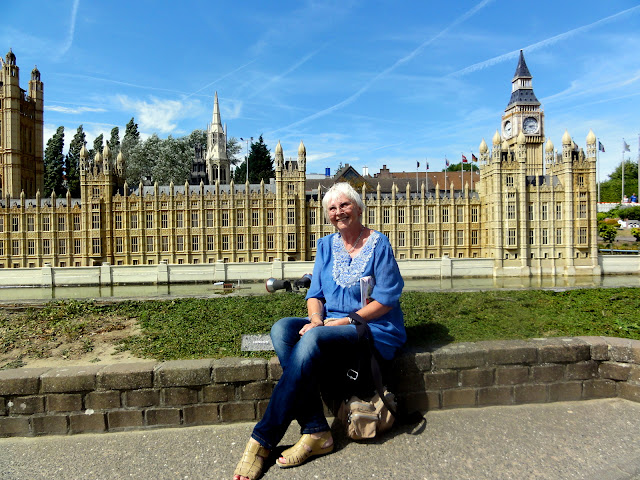 And I was sitting in front of Westminster and Big Ben ! The little copies of these famous buildings are very well built !

On Sunday it was even more hot, we approached 37°C (98 F). Impossible to go out elsewhere then in a nice wood. We choose the Solvay Park, with a lot of wood. 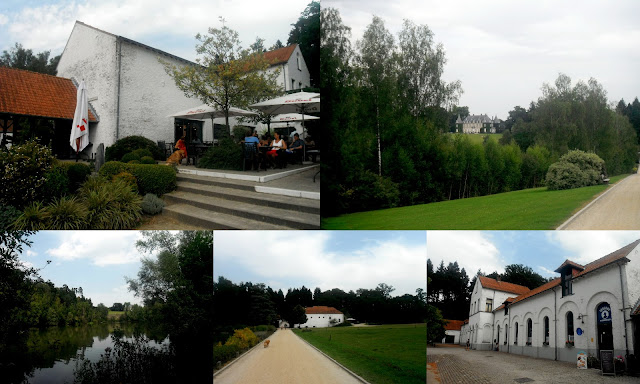 It's a beautiful place with a castle, but we prefered to stay in the wood and after Charly's bath we set in this tavern and had a cool beer. 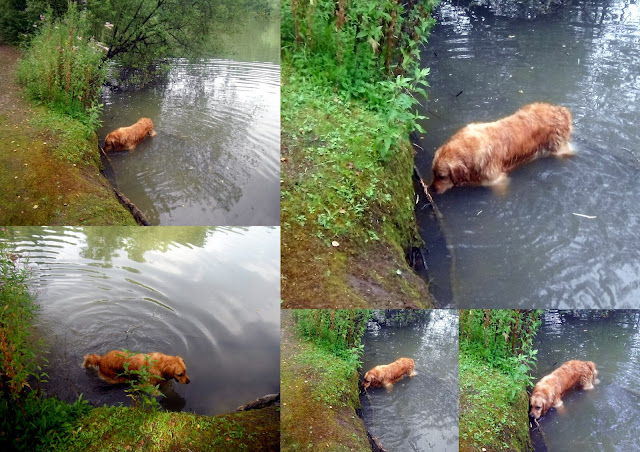 Nicole's dog Charly was more than happy to swim in the cool water of one of the ponds and tried to pull out the root of a tree. We were sitting on a bench and enjoyed the coolness of the wood. 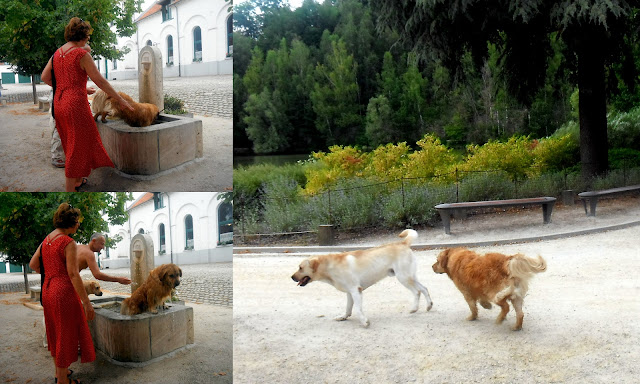 Then Charly met another dog and his owner took us to a fountain, where the dogs cleaned themselves, or rather were pushed in and jumped out ! 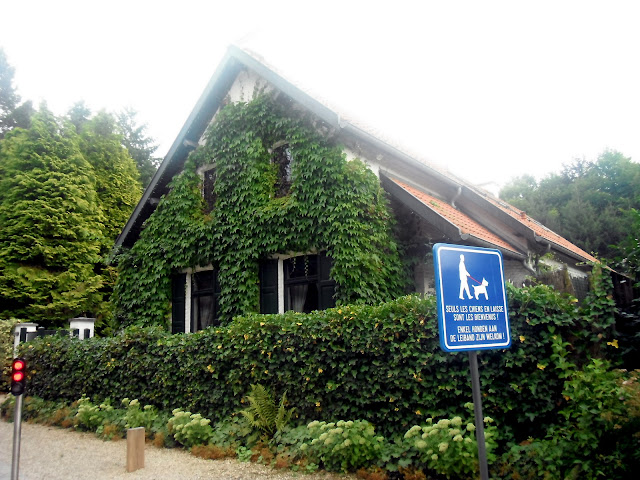 and then slowly we returned home. It was a real nice afternoon.
Posted by Gattina at 06:00 10 comments:

Labels: Fondation Felon, Solvay Park, What did you do this Weekend ? Brussels sightseeing

Today I wrote about my last visit at the South East Coast in England here
Posted by Gattina at 10:34