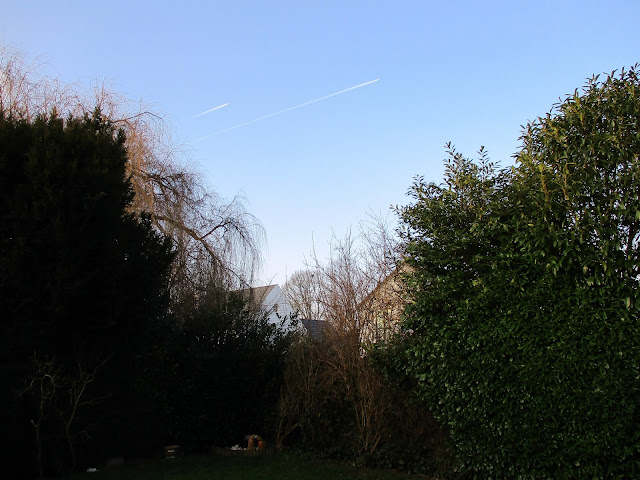 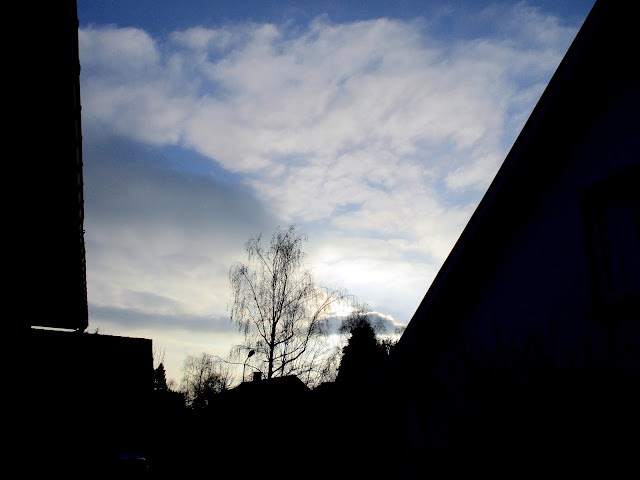 1. After the exciting troubles with the repair of our internet connection (you can read it here I was a bit exhausted from all that stress. 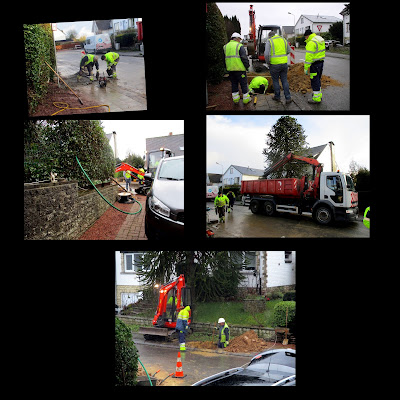 You can imagine the dirt I had in our garage ! It was raining the whole day and the street muddy poor workers.

2. First thing in the tne next morning came somebody from our internet provider called "Voo" and took pictures of the street now without the cable. I took a picture of him too. It even had started to "snow" ! but not for long. 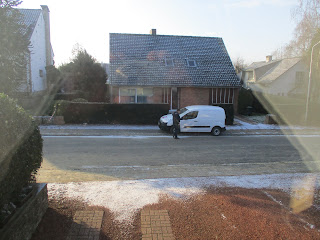 Fortunately we had our scrabble Monday and I could relax. 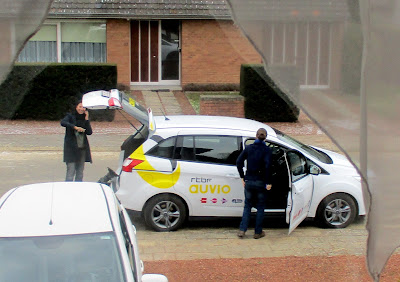 The Belgian TV team came back and checked our street, everything was done.

4. and to conclude the whole story a responsible of VOO came together with the TV team and they made again a movie of the now repaired street and the connection.

We spoke with the internet VOO man too and I told him that our garden looked now as if an elephant had danced the moonwalk in there, barks damaged, it has  to be redone completely.  Of course everybody was very kind we included and then they went away. The next day we got an email that as a commercial gesture we will get 2 month free of charge. OK that's better than nothing and covers at least the costs for the garden.

Next week then I will appear in the TV !  I don't know the date yet.

5. I had a call from Toyota that they had to replace and airbag, apparently they had forgotten when I had the car checked last time. I could wait it was very quick and as Nicole lives nearby I took the opportunity to have a coffee with her and pick up the travel documents for Egypt which had been send to her. Now I have to check my summer clothes ! That's at least a nice work !!

1. February can be a little bit tricky given the weather and the winter and the whatnot. I read a list (here) of things you can do to make your February brighter which included-start planning your next trip, take more baths, make your own chocolate covered strawberries, and exercise in preparation for swimsuit season. Anything on the list you might try? Which suggestion on the list appeals to you most? Tell us something not on the list that helps make your February brighter.

To make my February brighter, I went yesterday to my travel agency and booked together with my friend Nicole 2 weeks holidays in Egypt, where the sun is shining non stop and it is very warm !!
I doubt very much that we will have a swim season here, last year we hadn't !

2. Tell us about something you've seen or done recently that you'd say was 'super'?

The Asiatic "all you can eat buffet yesterday was super ! 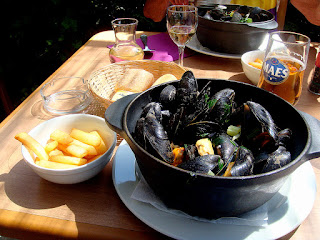 4. Something you're 'cheering' for right now?

To get my suitcase packed and fly away !!

5. The Winter Olympics begin Friday, February 9th in Pyeong Chang, South Korea. On a scale of 1-10 (with 10 being all in and 1 being no interest whatsoever) how interested are you in the games? Which event do you most want to see (you'll find a list here).

I would say 1 or maybe 2 because I like to watch the shows at the beginning and at the end !

6. Insert your own random thoughts here 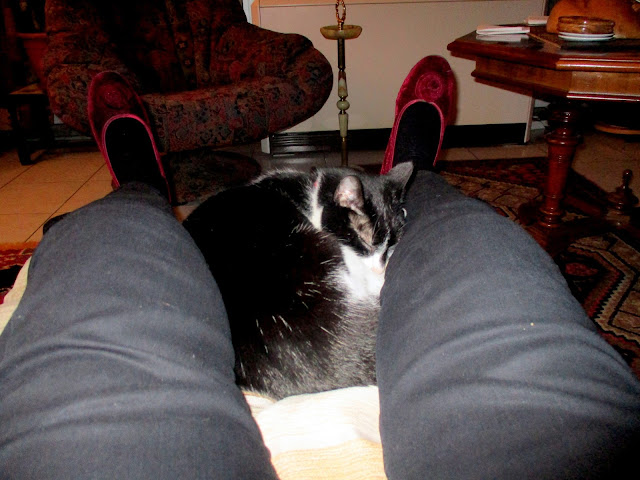 MY TOWN IN BLACK

When we moved to Waterloo (Belgium) in 1975, it was a charming village, with lot of fields, woods and space. Cows were grazing and you had a butcher, a food shop,  a shoemaker etc, and no supermarket or any big store or fashion boutiques. For that you had to drive to Brussels and do your shopping there.

Today it has all changed, the little shops have disappeared or nearly, we have all boutiques you also find in Brussels, the cows are gone and Waterloo became a city, because now we have more then 30.000 inhabitants.

All this is a normal way and the progress, so nothing to say, but why paint houses and new builts in black ?? The weather here is so depressive and the black buildings certainly don't cheer you up.

I drove along the main street which goes all through Waterloo. At the beginning it is called Chaussée de Waterloo and where I live it suddenly changes to Chaussée de Bruxelles.  And along this very long street houses or buildings are now grey or black ! 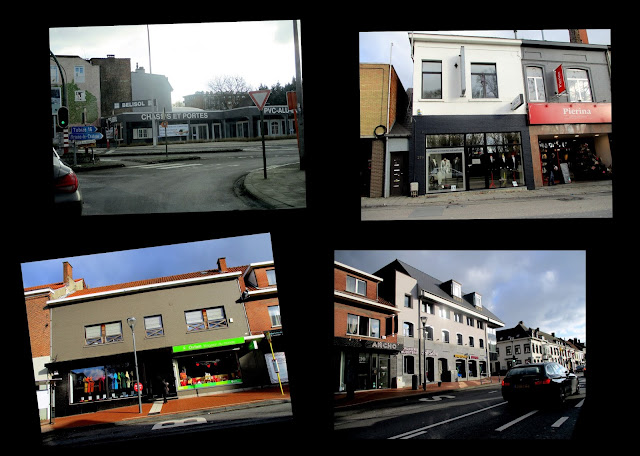 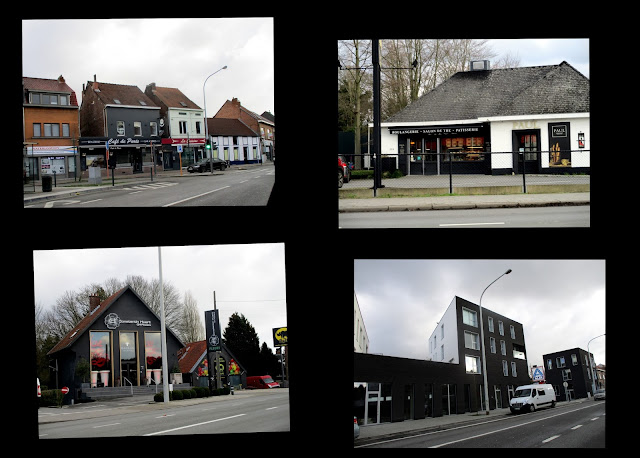 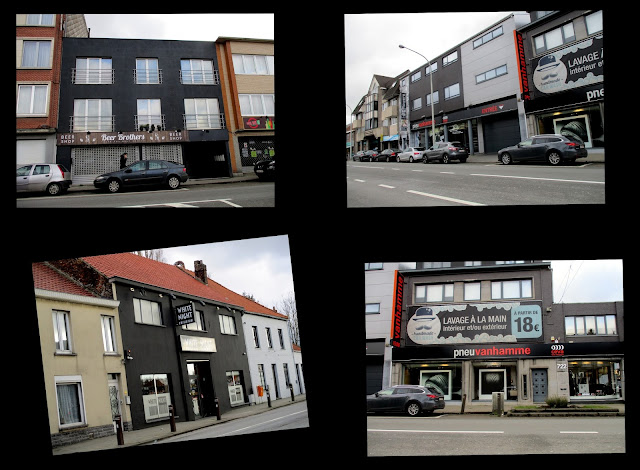 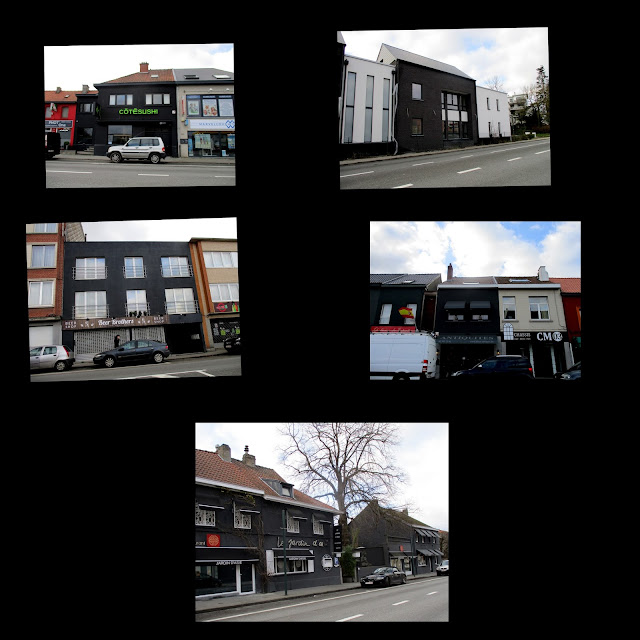 It even looks sad in the sunshine. 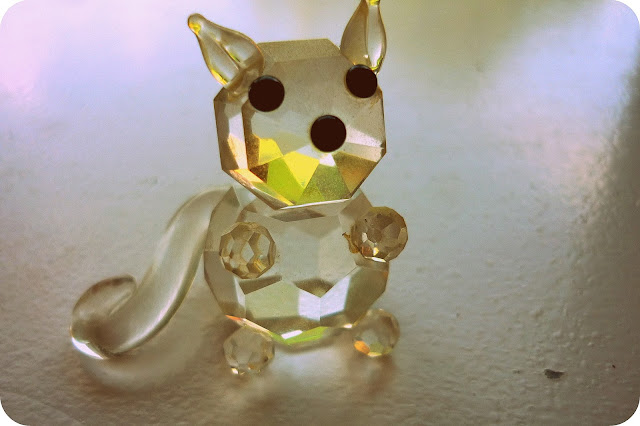 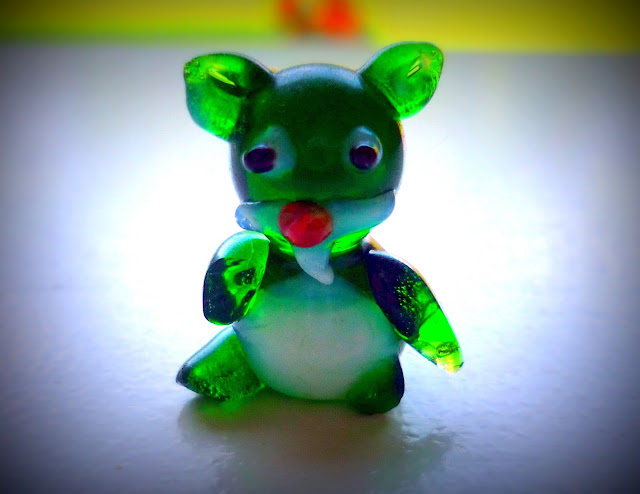 Since a couple of years we have a nearly new TV with a big screen standing in our guest room, and in our living room we had a smaller size. I found it a pity that that big thing was sitting in the guestroom for nobody and we had the little one upstairs. Mr. G. measured the TV cabinet and on a mm right the big one would fit in. 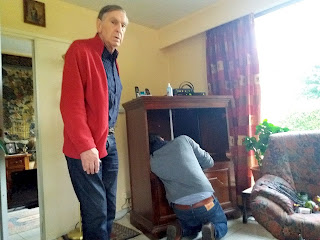 I asked our young friend JC if he could come and connect the big screen TV in the living room and the other in the guestroom. At 10 am he was standing in front of the door and made it. It was quite easy, in 15 min it had been done. Mr. G. had feared that we had to take the whole backside off, but hasn't been necessary because there were a big hole for the cables.

Now all is settled and we are happy with our big screen.

In the afternoon I went to Nicole to try out a new mattress which her daughter had brought. I should have taken pictures because we had so much fun to lay on the new mattress to see if it was not too big or would slip, because Nicole's bed is with a remote control so that she can change positions.

The next day she called me to tell that she had slept like an angel and that it was the best mattress of the world. I wonder how long that will last, because if one time she doesn't sleep well she will pretend the contrary.

Because of the still depressing weather we decided to have a cream tea in "our" newly discovered Tea room and Bunny (another friend came too) and we had a little chat and a delicious cream tea. 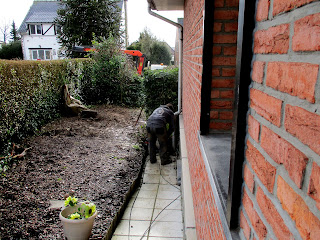 I was quite tired with all the events from the previous days with the TV coming and then the opening of the street, and other works, now our garden at the side looks as if an elephant had worked in there.

We will see what happens now, when the manager from the provider comes on Tuesday.
Posted by Gattina at 09:18 3 comments: