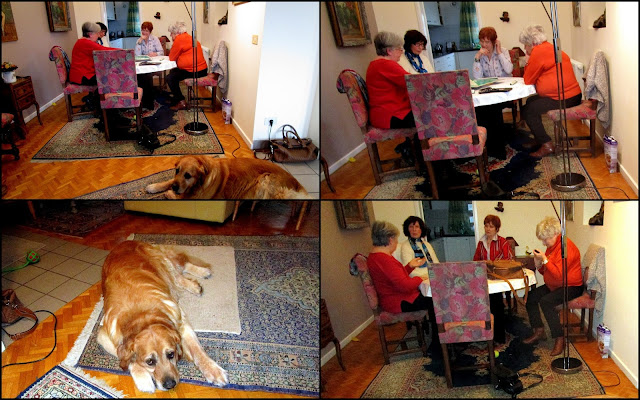 Now as usual the week starts with our Scrabble group. This time it was Nicole's turn. Charlie was happy to have so many ladies around who petted him. But then a thunderstorm came and the poor dog got hysterical. He is so afraid ! He found a nice hide away. Suddenly between 10 legs under the table Charlie was in the middle and shook like a leaf ! We all comforted him and when the thunderstorm was over he came out and collapsed on the carpet. Meanwhile Mireille despite her handicap of being half blind won again and had started with a scrabble which meant 50 points. I was the looser for once but that doesn't bother me at all ! We had our laughing session too without paying for it.

2. I had to do some shopping for my trip to Cologne not exactly the town but in a small village outside. I bought some Belgian specialities for my friend. She was alone her husband was in wintersport with friends.

3. My suitcase was quickly packed, but then a disaster happened, our micro wave had troubles ! For once Mr. G. panicked because I went away and how should he heat up his meals ? We decided that we had to buy a new one. The next morning my eyes not yet open he asked me if I had found a suitable model. I pushed aside my murderous wish to strangle him, and said yes. I had to print out the model and then he hurried away to buy that thing. This was the first time in 48 years of marriage that Mr. G. bought a household appliance ! I have to note down the date.

4. The microwave problem solved, he still uses the old one because it still heats up because he has to study the notice, I loaded my car for my trip to Cologne and in pouring rain drove away. The whole way was terrible sometimes I could hardly see, fortunately there was not a lot of traffic on the highway and 3 hours later with a stop to have a coffee and something to eat I arrived. 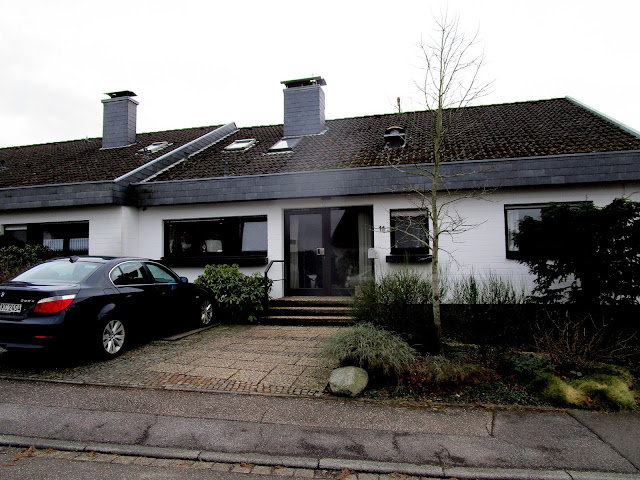 The house from the outside looks small but is huge inside It has 8 bedrooms, a snug, a living room, and 3 bathrooms and a sauna. I had a nice room with a Korean bed and ensuite. As always we had a lot to chat, only this time it wasn't me but her, she speaks like a waterfall and jumps from one theme to the other. It's fun.

5. The weather got even worse, there was a very strong wind and that made the temperature feeling very cold. But we didn't want to sit inside the whole day so we went to Cologne. 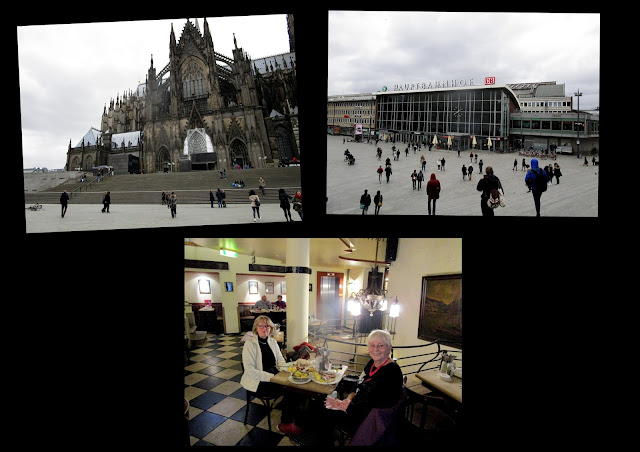 I know Cologne quite well, at least the city center, but it had changed so much that I didn't recognize anything. So many new glass boxes like in all big cities. 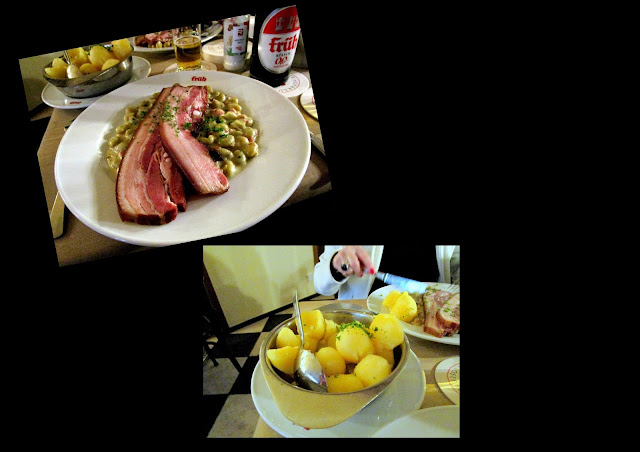 This was big green beans in a sauce, with bacon and boiled potatoes. It was delicious.

I was  surprised about the choice of alcohol free beer, there were so many brand marks nearly like the real beer. I bought 20 bottles for us, as we don't drink any alcohol.

We returned home because it started to rain and we were frozen. But still it had been a nice day.

In the evening we watched crime story in the snug and had a beer ! 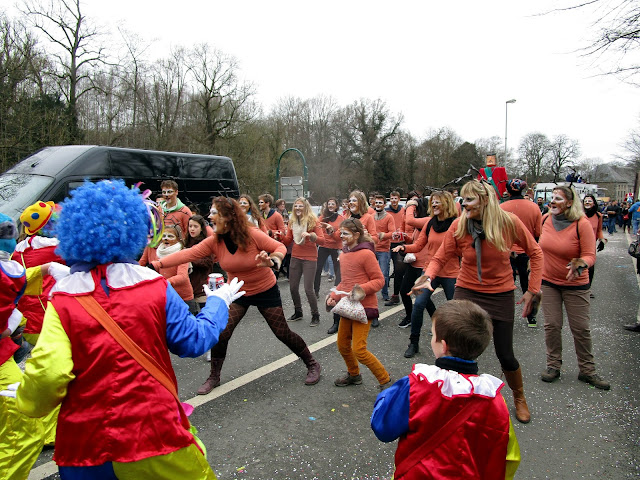 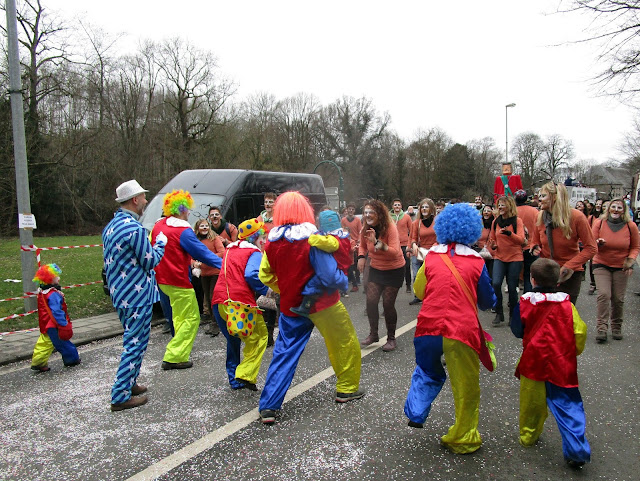 
1. 'Slow and steady wins the race'...tell us about a time this was true in your own life.
This quote doesn't fit at all on me. I am not slow and steady if I want something, I am rather the person who stamps my  foot  on the floor or I use the crafty way to get things happen immediately ! There is nothing in my life I got by being slow and steady !

2. 'As slow as molasses'...Do you like molasses? How about maple syrup? Caramel? Butterscotch? What's your favorite of the slow moving treats mentioned here, and what's your favorite food made with that sweet treat?
Difficult to answer the question, I am not a "sweet" girl ! The only thing I like from time to time are pancakes with maple syrup, but only during holidays.

4. Your favorite thing to make in a slow cooker or crock pot?
I don't cook anymore !

5. 'You may delay, but time will not.' ~Benjamin Franklin Are you more a hurrier or a delayer when it comes to unpleasant tasks that need doing? What are you currently either delaying or hurrying to get through this week or month?

As I can do what I want when I want, for the moment I am rather delaying things !

6. Tell us three thjngs you encounter regularly or even just occasionally that you find to be annoyingly slow.
Occasionally Internet, slow traffic to city center, waiting to be served in a restaurant

7. March is National Craft Month. Are you crafty? Tell us about something crafty you'll try in the next thirty one days. Or something crafty you'd like to try or wish you had the skill to make happen.
I can be very crafty when I want something, but for the moment there is nothing I wish, because I have been crafty already !

8. Insert your own random thought here.
What should I take along for my trip to Germany to visit my friend ?  The weather is so moody, maybe I should take my whole wardrobe along ? Very difficult decisions !

Villers-la-Ville is a small little town with a total population of 9,572. It is not very far from Brussels and a well liked place to live.

In the north of the village, lie the ruins of the Villers Abbey, which was one of the most important Cistercian abbeys of Europe founded in the 12th Century.

This time I didn't go there to walk amongst the ruins but outside to see the carnival procession, which takes place each year. 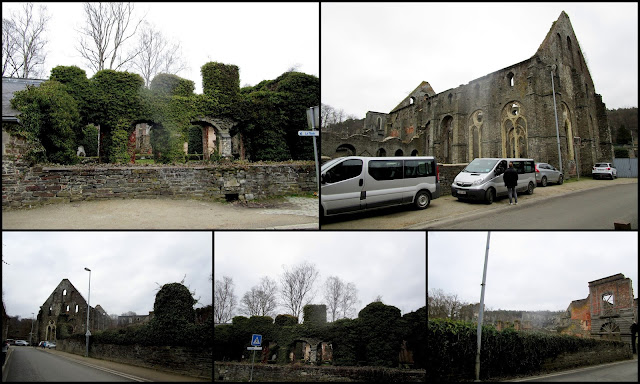 Unfortunately the weather was cold and grey and the poor people in their costumes were freezing. But that didn't matter at all, they all had a lot of fun and beer was warming up anyway ! 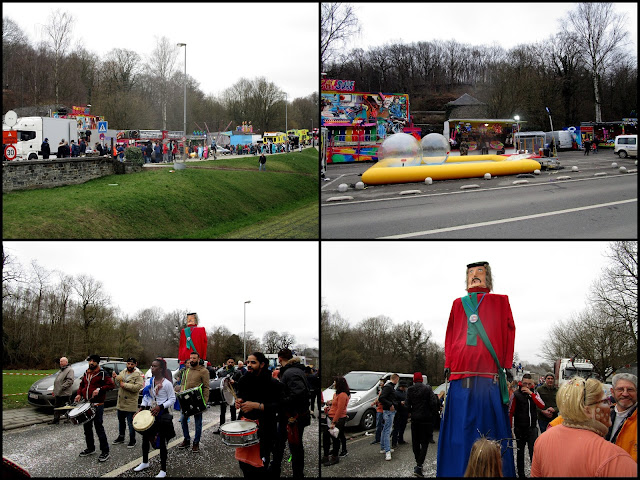 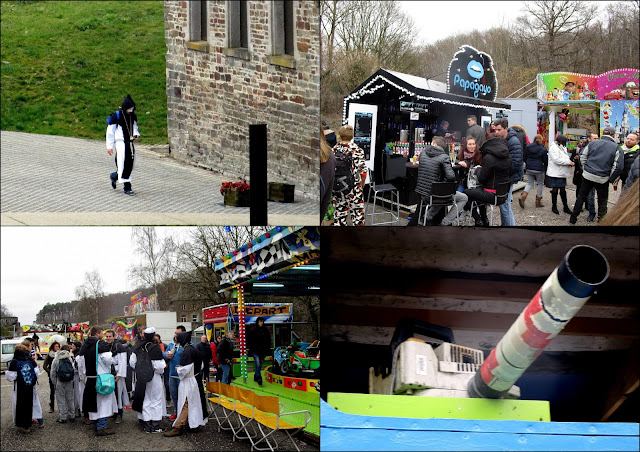 Monks and a canon to shoot confetti on the public ! 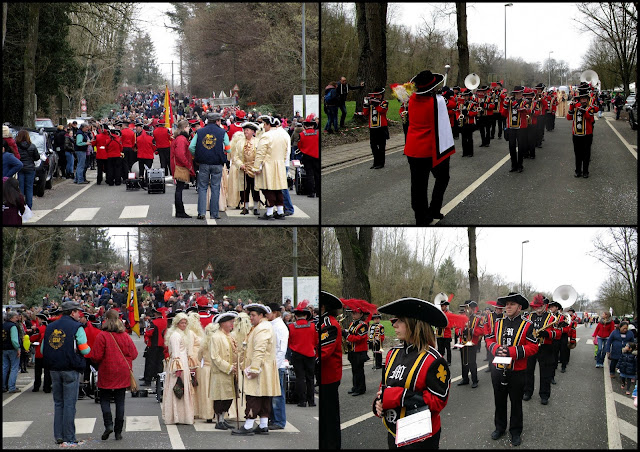 The band in the procession 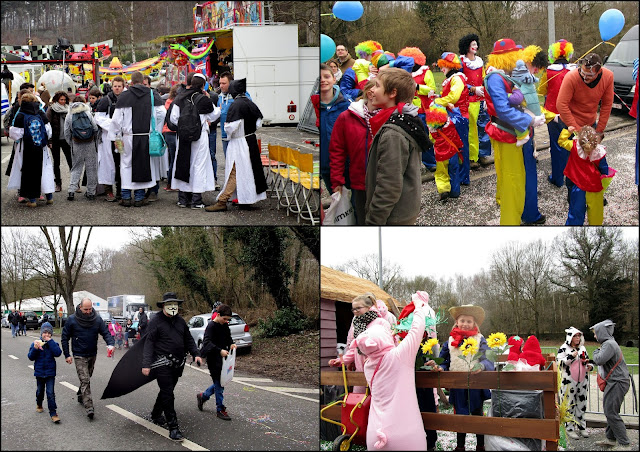 All kind of costumes 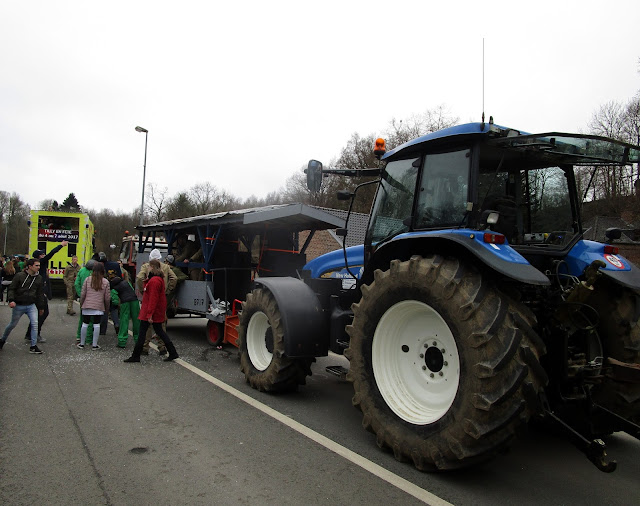 The tractor had to pull the carnival wagons 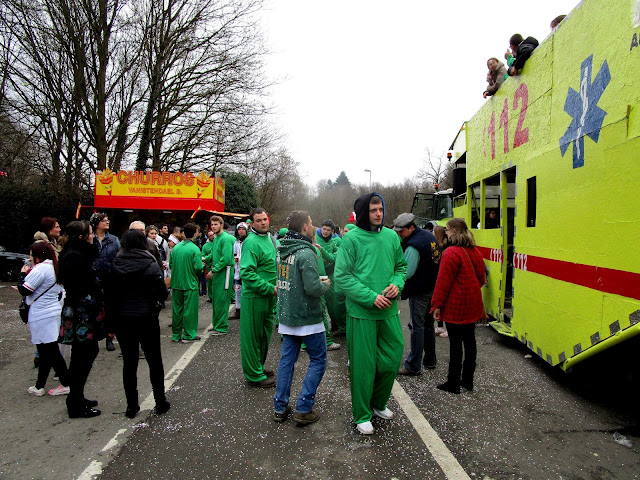 Need a surgery ? here there are surgeons ! 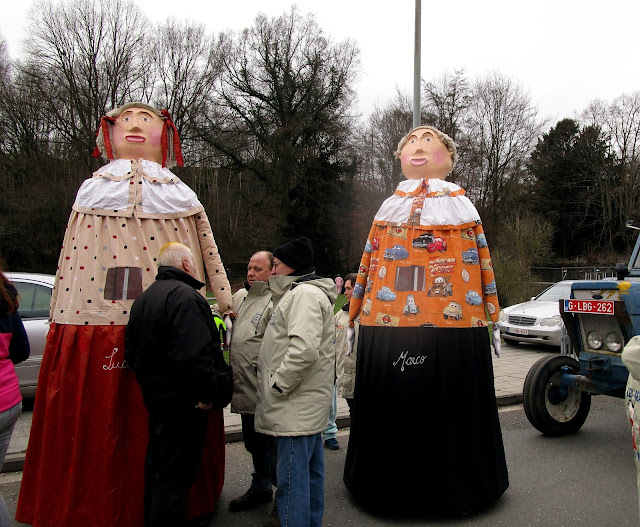 The giants of Villers 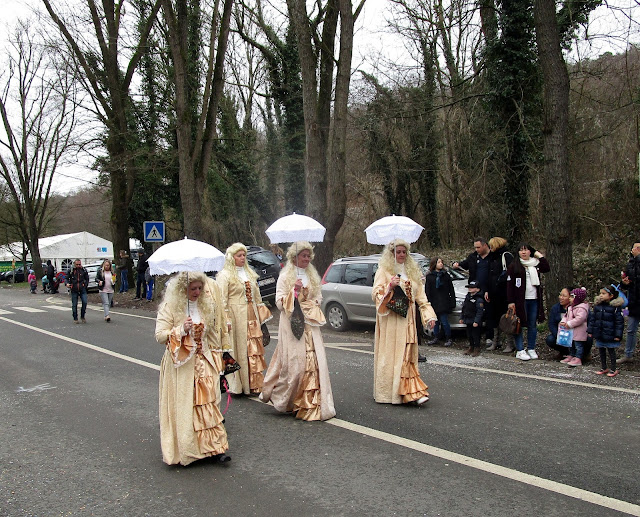 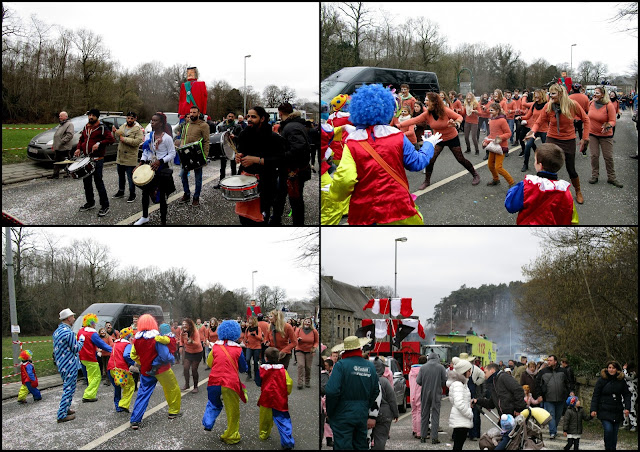 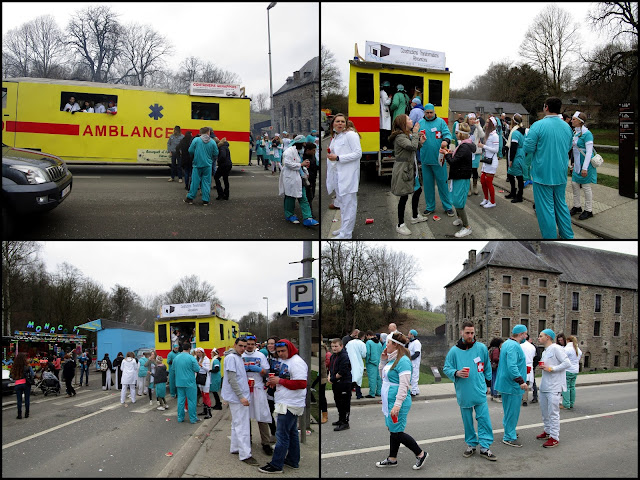 Doctors, nurses and an "ambulance" 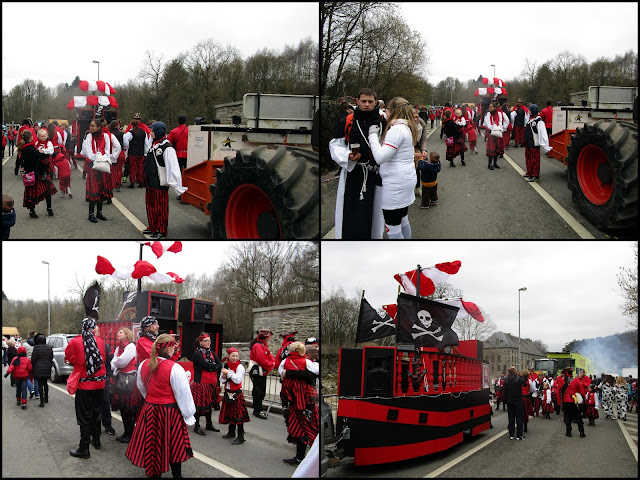 Of course pirates could not be missed 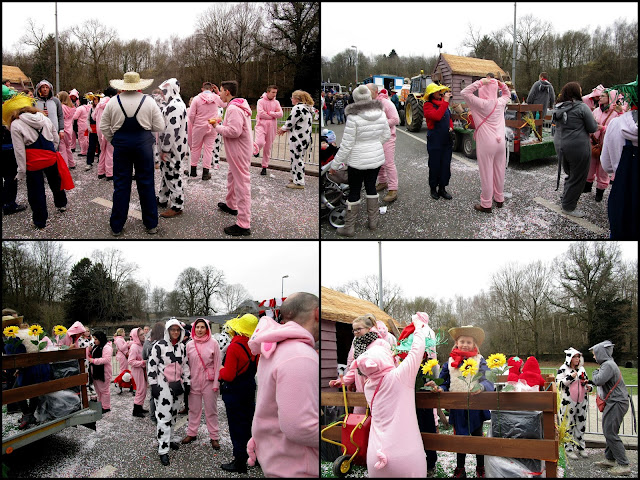 Pigs and cows have fun together 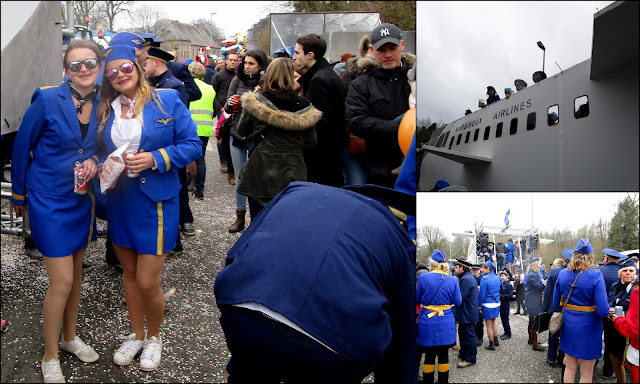 Stewards and pilots in front of an airplane 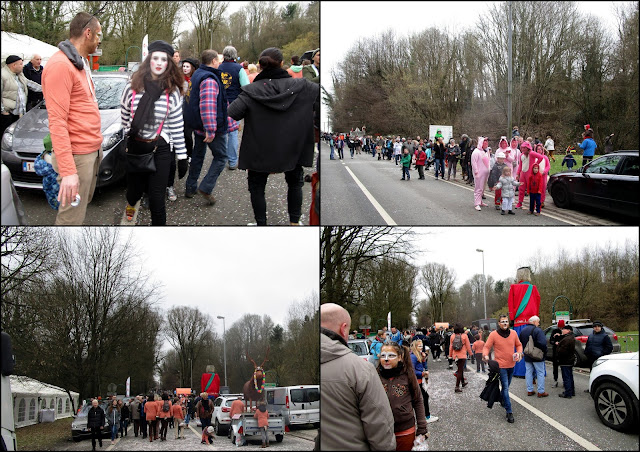 and the others with fancy costume or masks.

There also was a huge tent with a lot of different food and drinks, and a fancy fair for the kids.

We had the visit of our young friend, and he told us that he is still looking for work ! I think he asks too much, he had a very nice job, very well paid, but he was always on the road so that his marriage broke. But he doesn't give up hope.

I tried out my new GPS and am very happy with it. First I was a little hesitating, I thought it would be difficult, but it is so easy and so clear, I had no problems. So I drove around and put new addresses in, just to get used. It's much better than the Garmin I had before. Now I am ready for my trip to Germany, because without it I couldn't drive !

In the evening we had our Facebook party, from the members of the page "Vivre à Waterloo" (living in Waterloo) It was so nice to meet life again, we had done this before. We were about 50 people from the group and our administrator had booked a Greek Restaurant. We had a group of 3 singers, who performed real good. 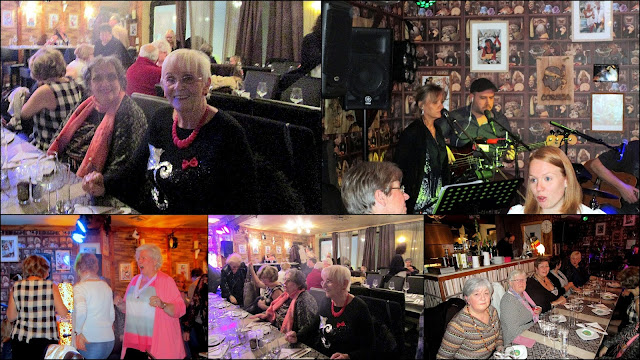 I was with my "teacher" from the painting group (below right) she had such a lot of fun and we danced ! The lady in pink is 85 years old, you should have seen her dancing ! More then Mirella and me ! 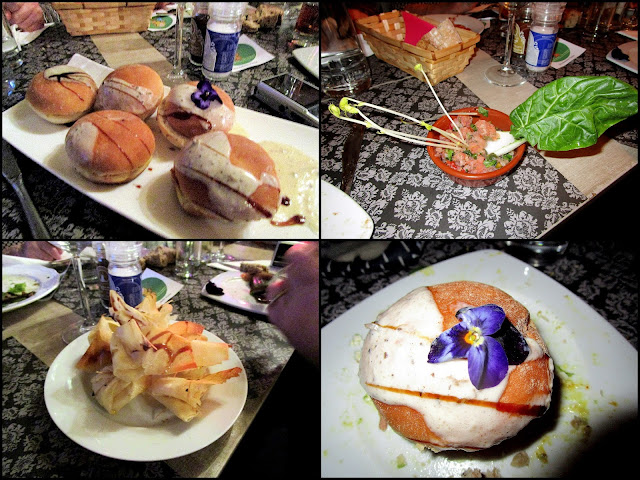 The food too was excellent, after the third round of tapas I forgot to take pictures.  The rolls were with "foie gras", then salmon, and the fancy looking thing was goat cheese in a kind of chips, but of course it werent't chips ! There were also two main courses, but we didn't eat very much we were so full from all these Greek specialities. Everybody enjoyed the evening very much and we finally went home at 11.30 pm.

Sunday afternoon, I went to  to Villers la Ville 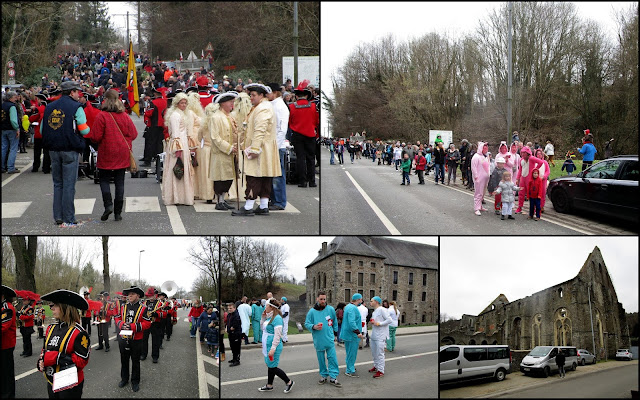 In front of the ruins of the famous Abbey the yearly Carnival procession took place. Unfortunately it was so cold and windy that I just had a look on the costumes but didn't wait for the procession. I took some pictures and  on my returned stopped at Nicole's for a coffee.
Posted by Gattina at 03:10 8 comments: