1. The week started very "nice" ! It had snowed during the night and this in almost mid March ! The view of the white street put me in a very bad mood. 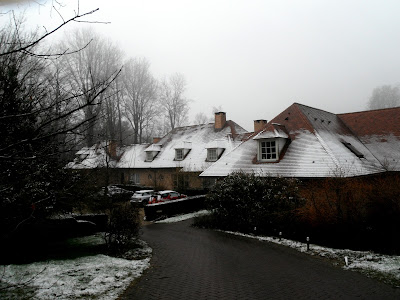 Nevertheless I went to my aqua gym and my misfortunes continued, the water was cold for the first time since I go there ! It got a bit better with the movements but everybody complained and we were freezing. One even left the class ! When I went out the snow had disappeared, but my mood hadn't got better, I am so fed up with this cold, I stayed home pottered around did some blogging and watched TV.

2. Mr. G. had got a big bone for Charlie, Nicole's dog. As it was too big and Charlie protests if you want to take his bone away when it's only half eaten, he took an axe and cut it in two ! 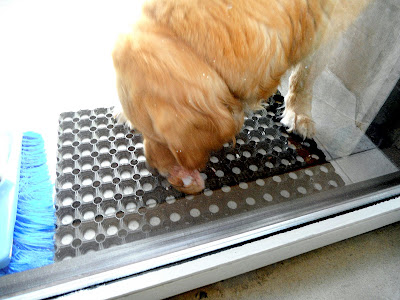 So Charlie had two pieces I gave him one when I went to Nicole to keep her company, she slowly gets crazy not to be able to move around as usual and has to keep quiet. She had gone to another doctor who told her that it was not the muscle, but still the rip which she had broken which hurts so much and it takes long to heal at her age ! The only thing she can do is rest and take strong pain killers !

3. I got a sudden energy attack and cleaned the two boards which are hanging over my bed. 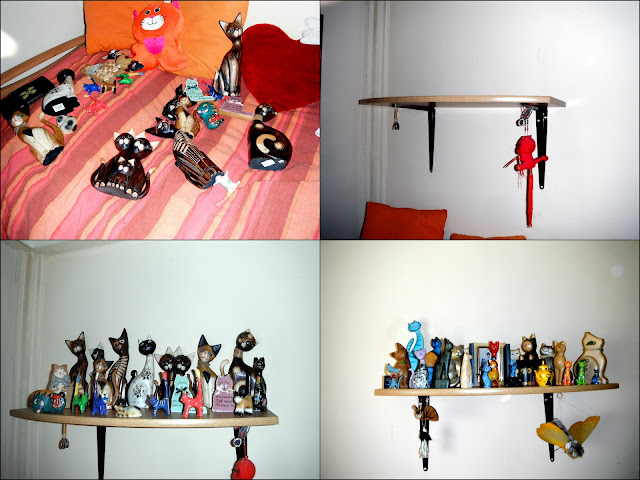 I took all cats down and cleaned them and then the board and then I put everything back. For that I had to kneel on my bed, which my cats found rather strange.

4. The sun had come out and we wanted to go for a little walk with Charlie, but the wind was so strong that it was impossible to stay outside for a long time. So we went to the Mont St. Jean farm, the only place where you get the feeling to sit outside because of the beautiful views over the fields and still you sit in a comfortable leather chair in the warmth. 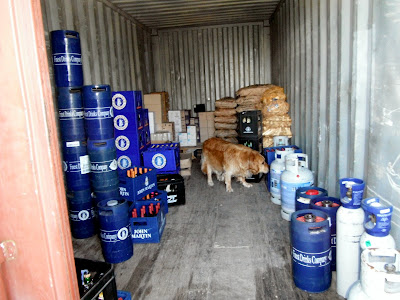 When we arrived we made a little tour and Charlie found a storage room which was full of bottles with wine and wine barrels. We discussed if we should steel some or not, but we are honest women and refrained the temptation. 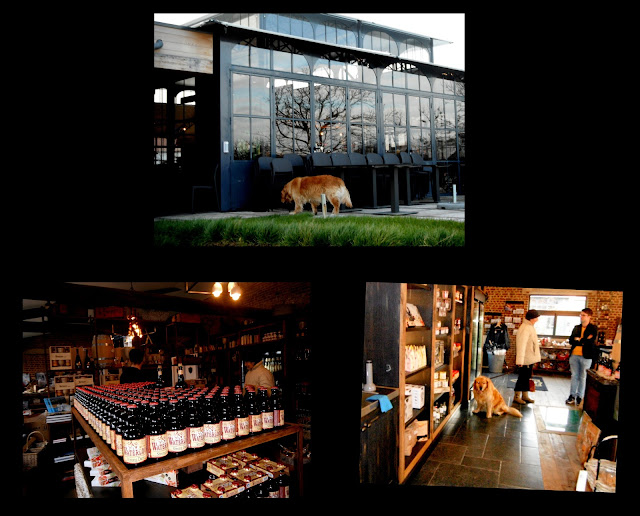 There is also a souvenir shop in front of the Brasserie and we had a look inside. They sell a lot of Waterloo beer, which now exists even as dark beer and in different alcohol content levels. We chatted with the salesman and he said that this beer had a lot of success. It had been created for the bicentenary of the battle of Waterloo.

5. We have two new ladies in our painting class, who are very nice and fit in the group which is very important too. 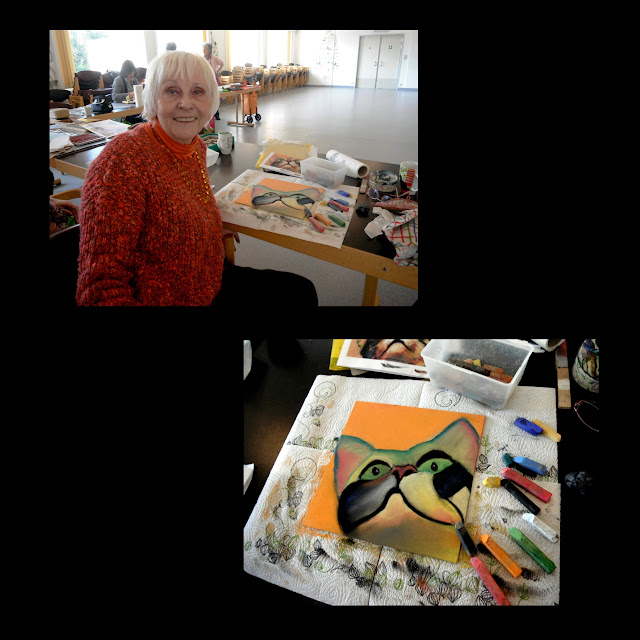 After a few years I suddenly had enough of Acryl painting and switched over to pastel which I had already used long time ago. Fortunately what I had learned about pastel painting came back, just like somebody who had rode a bike and after a long pause is surprised that he had nothing forgotten.

A LITTLE GIRL AND THE HORSE

My best friend when I was 9 or 10 had a one year old little baby sister who had to go out for a walk every day. For my friend it was a burden for me a pleasure. I was the same age and was very proud when I was allowed to take little Anna out in her stroller.

One day I thought I will take her to a field where horses grazed.

There was a fence so that the horses couldn't escape. I have to say that at that time I really was terrorized by horses, I liked to watch them but from far, very far and I really don't know why I just choose this way. When we arrived at the field I showed little Anna the horses which were at the other end.

Suddenly to my horror, one of the horses probably thought I was there to bring some treats and galloped towards me ! I screamed and turned around and pushed the stroller as fast as I could. The horse had managed to get out despite the fence and followed me ! The picture must have been something for the hidden camera. Me running with the stroller Anna screaming and the horse behind us, it even tried to sniff at my head. It was a friendly horse, only I didn't know for me it was a monster.

Finally a man saw me running and the horse behind, he came over, stopped the horse and comforted me. He tried to explain that a horse is a nice and friendly animal, but I didn't really believe him. Meanwhile other people had gathered around us and comforted me and the baby, somebody informed the farmer to lead his horse back. I returned home my heart still beating at 100 miles/hour, returned Anna in her stroller back to her mum and went home.

This fear of horses lasted nearly my whole life, although I really found them beautiful. And one day I have no idea why the fear suddenly stopped, but I was already 60 by the time. Today I pet them talk to them and my wish is before I leave this world to once ride on a horse !

Labels: story of a little girl and a horse, Warm heart Wednesday 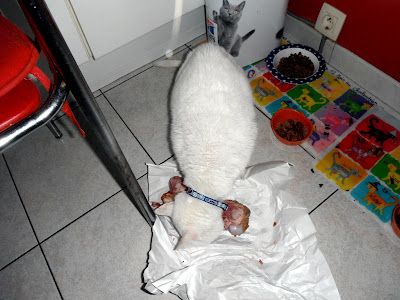 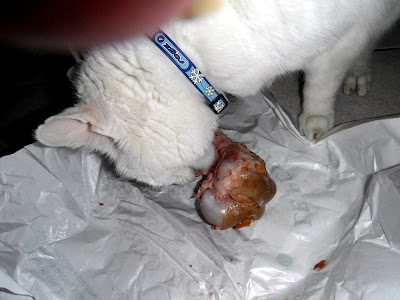 (he stole a bone)

I went with two friends visiting the Exhibition : "Sarcophagi Under the stars of Nut" in the Cinquantenaire museum in Brussels Museum.

Fortunately I have enough to do with sorting out my pictures and I have also started to clean out some drawers in the kitchen. The weather continues as bad as possible, it rains cats and dogs (the heaven must have a huge refuge) it's grey and humid and the doctor's consultation rooms are full.

So far we escaped the general colds and flues even the cats don't sneeze. Nicole's muscle strain which she had got when she broke a rip, is still not healed after 3 months and she suffers a lot The worst is she is a girl who can't sit still and that's why it lasts longer. The fact that Charlie also pulls sometimes when they walk together is also not ideal. So I went over to keep her company. She was busy with painting Charlie's portrait. It's not yet finished but it is real good. As she has a new remote control and another screen on her TV (she had changed the supplier) she asked me to show her how she could record movies. Our remote control is completely different and the screen too, but I managed to find the place where it was. To her surprise she had recorded already 10 films out of a series about rape and sex ! I teased her when I saw the first one and she was horrified and swore that she had done nothing. Nothing maybe not, but she must have pushed on the wrong button ! Now we tried to delete these series, no way ! They always came back. We laughed our heads off and Charlie wondered what we were doing. Finally we gave up. I told her to read the notice ! 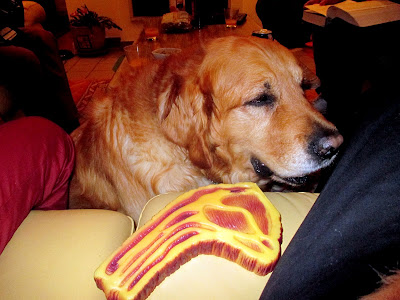 Charlie brought me his toy and asked to share the steak with him.

On Sunday I went to Ilona we wanted to see the carnival parade in her little town. I arrived through a potpourri of weather, I started with rain, continued with hail, then sun again, then snow and finally rain. We decided not to go and to catch a cold and getting wet.

Instead she lighted her stove and we chatted not about men or our sons, but this time about what happens in the world ! The invasion of refugees in Europe and then the elections in the States. Elections there are always funny to watch on TV because they make a real show which doesn't exist in other countries. It's like making a comedy movie. Every candidate promises the heaven on earth and people believe it. But this time it takes the biscuit, with a candidate like Donald Trump who seems mentally handicapped or bipolar.  How is it possible that people with a normal IQ take this clown for serious ?
It confirms money allows everything even a presidency ! Last time it was a 15 year old boy who wanted to be president, and that was also funny, but this man is a dangerous fool.

We came to the conclusion that we couldn't change anything, only hope that somebody has the guts and put him in a psychiatric clinic, where he belongs.