1. There is nothing exciting to do for the moment so besides aqua gym as activity, I pottered around in the house, blogged and watched TV. 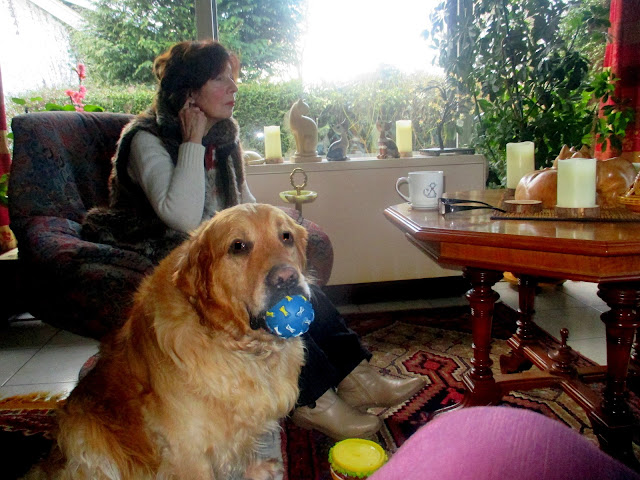 Nicole was in the same case so she came over with Charlie, who was very happy to sniff at my cats, who were less happy but didn't run away. Only Pookie who is deaf hadn't heard him coming and saw this huge head as big as her whole self suddenly sniffing at her head. She ran away like a flash, poor thing was shocked !

2. The only outside distraction I had this week was going with Kim to the groomer !

She is an unbelievable hair producer it's a pity that I can't spin and knit ! 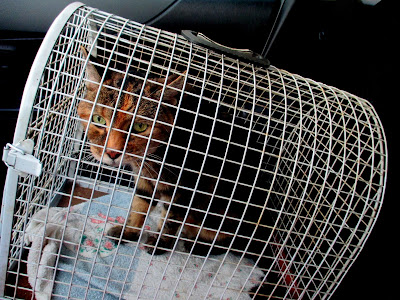 the next day I went with Pookie to have her claws cut. She is 18 years old and doesn't go out very much. After that I was happy to be home in the warmth, because outside it was cold and wet. 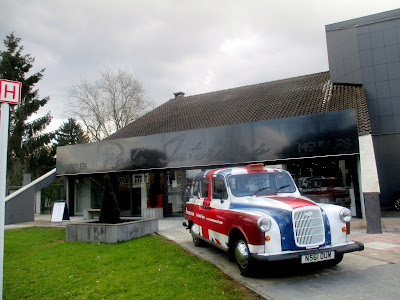 We had a British store in Waterloo which became to small, so they moved into a bigger space. I was curious to see how it was and indeed much bigger. I bought some Chili beans and a special bread flour for my bread machine. I hope it tastes as good as it smells. 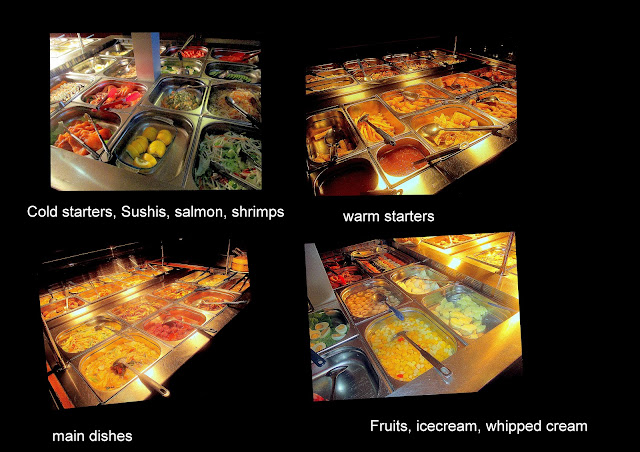 After our painting classes we went to "our" Asiatic food restaurant. As usual the food was delicious, and we had a lot of fun ! and ate a lot ! The whole menu plus a coffee is for 12,50 €, no wonder that this restaurant is always full.

Chantal (now 61) showed us a tattoo she had had made just the day before ! Nicole and I made eyes like saucers, we both hate tattoos. I had never thought that Chantal's dream was a tattoo ! So now she wears a feather inside her left arm, and 3 little birds in her neck. We suggested a little cat !

I told her that it must be the midlife crisis ! We stayed there for about 2 1/2h and then finally returned home. It snowed a bit.

HOW TO MAKE EASY THINGS DIFFICULT

For that once a year he has to prove that he is still alive so that his dear wife doesn't get this generous pension after his dead. 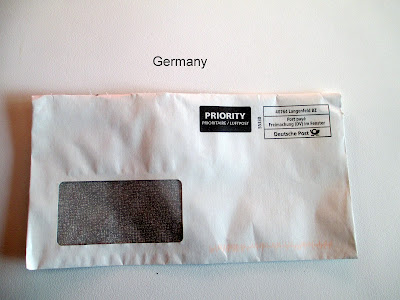 He got a letter from Germany, from the "Deutsche Post" 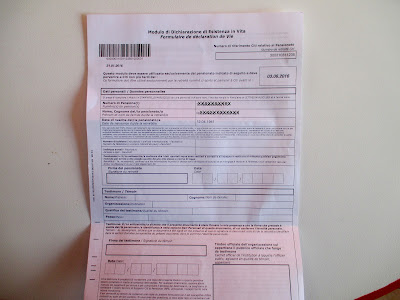 Inside was a form in Italian on one side and French on the other, to be filled in by the Belgian authorities that Mr. G. is still alive. So yesterday morning he presented himself in full glory to prove that he is still part of Waterloo's citizens. The employee checked the form, could only state that he is not dead put a stamp on and a signature. 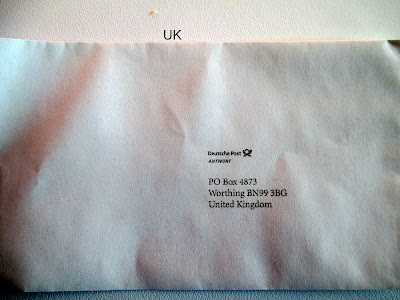 Then he had to send this form to the UK which fortunately is still member of the European Union.
Hopefully the office there understands French or Italian.

Now I try to understand the logic of the European Union ! Why sending an Italian form from Germany and then to the UK, for an Italian pension ?? 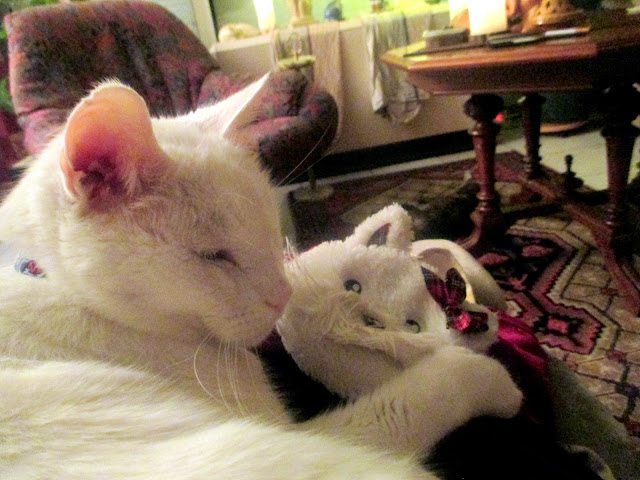 Maybe in your country "Day Cares" for dogs already exists, but here it was the first one which opened. I had never heard or even thought of it, but a young couple who was looking for work and didn't find any had this clever idea. To my knowledge it is the only one around Brussels, which keeps dogs for an hour or more or for half or full day.

Of course Nicole wanted to go to the inauguration and I was curious too of course. Charlie was wondering where we would go. 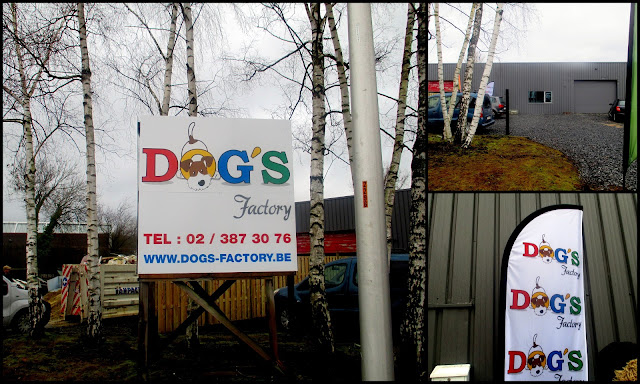 and then we saw the sign and a lot of people with their dogs standing outside ! 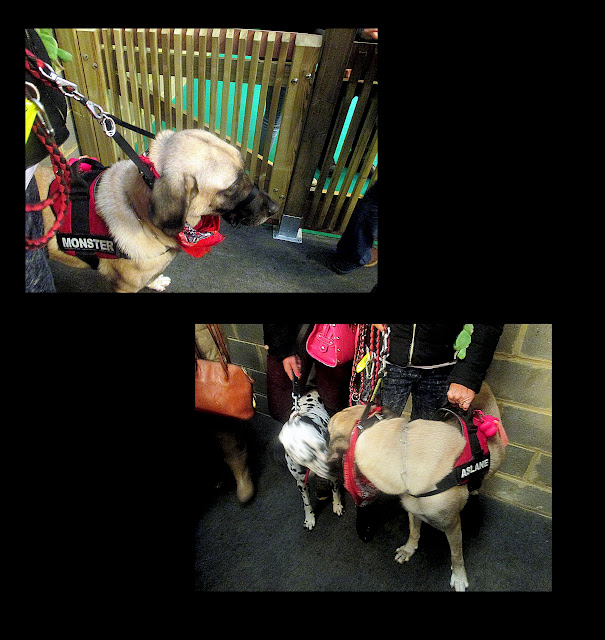 The first dog I saw was "Monster" dog who looked very dangerous and impressive but was the friendliest dog ever ! 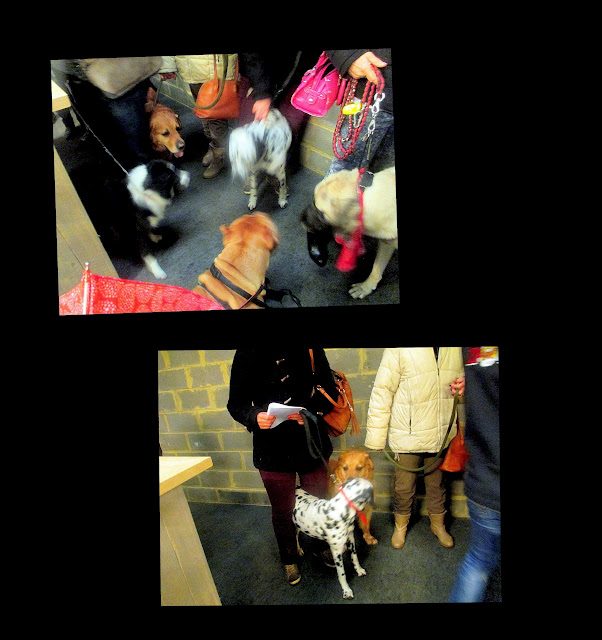 Charlie made friend with a Dalmatian girl, and they were all standing there with their owner waiting to get into the play ground. 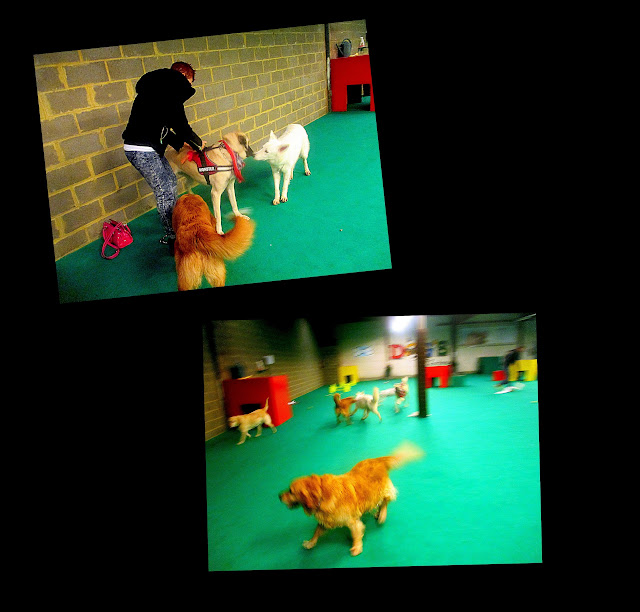 Then they were let in. The big dogs were separated from the small once. I forgot to take pictures of the mini dogs. 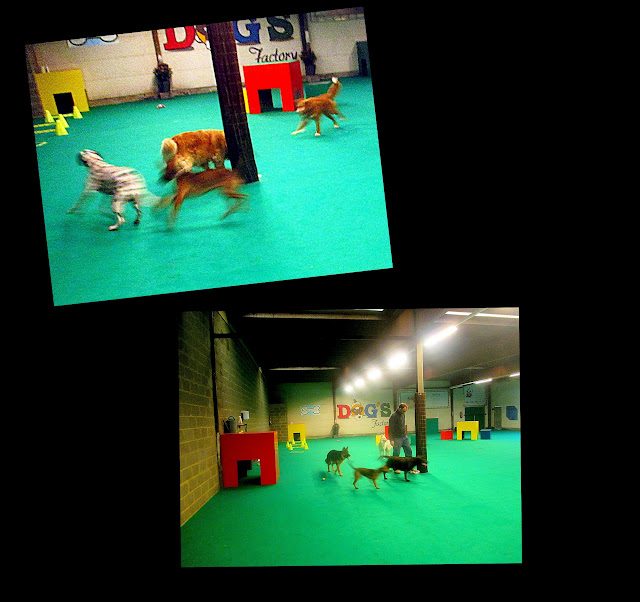 The playground was full of toys, huts, fake trees and water bowls everywhere 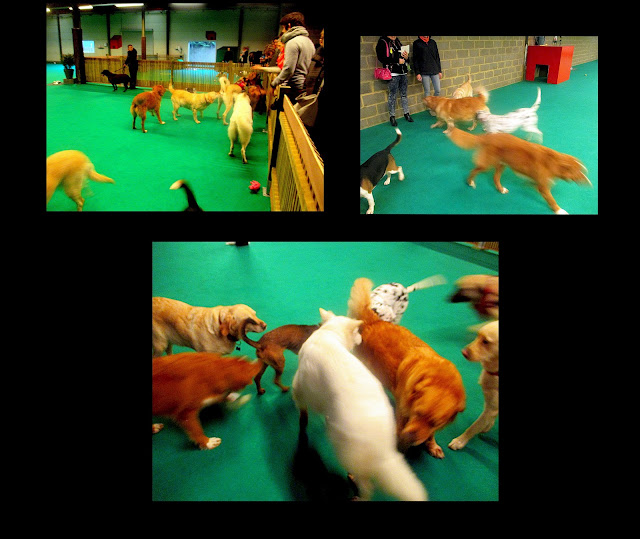 They were all running around and playing, no fights nothing, only one running behind the other ! From time to time just like kids they came and checked if their owners were still standing at the fence. 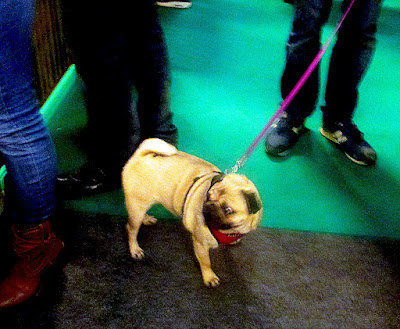 The only little one I saw was just besides me and looked at me with these outstanding eyes which makes these dogs look so funny. 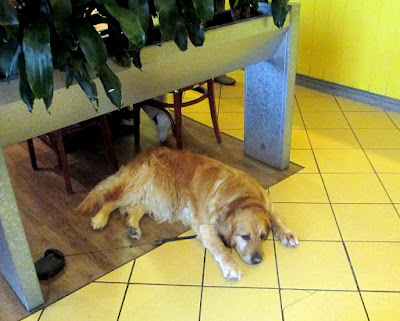 Poor Charlie was exhausted after 45 min of playing with the others and was happy to rest while we had a coffee.

When I came home my cats didn't appreciate at all the smell of dog I probably had on me !

We wanted to try out one of the old restaurants which are still standing at the beginning of the road to the Lion's mount. 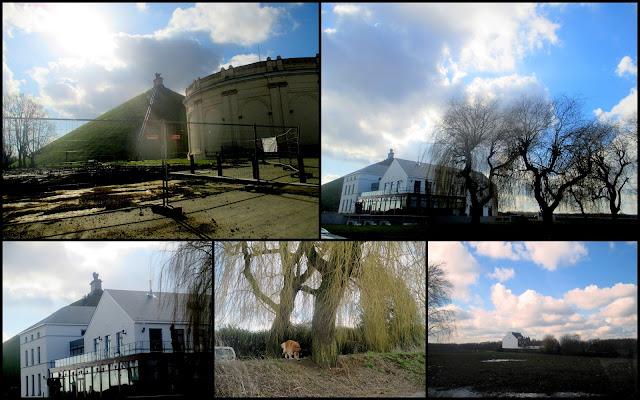 The site looked dreary, no living soul around besides us and Charlie,  some cars on the parking space probably belonged to the staff of the new built restaurant. What a difference to the site before the renovation, the cafés and restaurants which had been demolished were always busy especially on weekends. 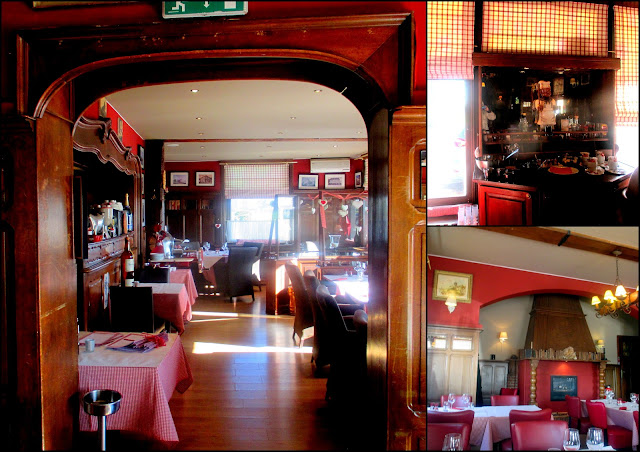 So we ended up in the "Estaminet de Joséphine" which had a warm feeling decoration, but unfortunately the lunch we got was not very good. It had been a steak, with salad and French fries, the salad was 2 leaves, the fries too fried and the steak stemmed from an old cow. I got one piece stuck in my throat and couldn't breeze anymore, I thought my last minutes I would spent in this historical place, but Nicole slapped me on the back and the piece decided to go up and my life was saved. 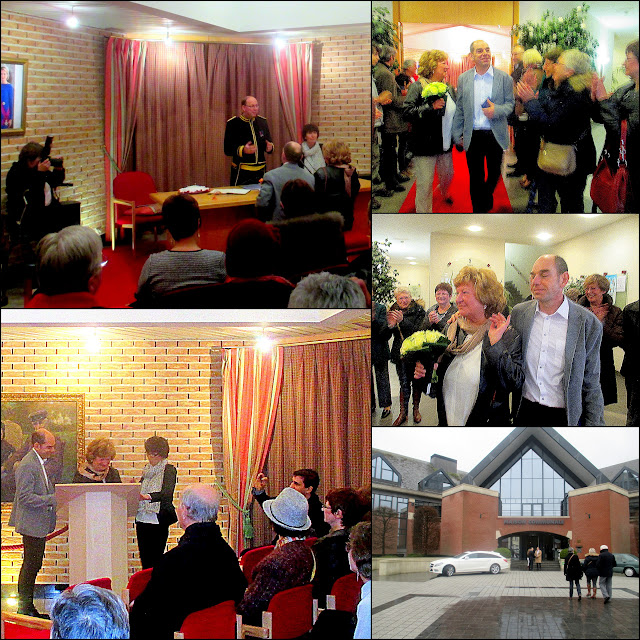 One friend of my painting class got married after 28 years of common life. The ceremony in the city hall was so funny we all laughed so much. The groom had forgotten the jacket of his suit and also the tie, so a friend ran over to his house nearby and borrowed him a jacket, which was slightly too large, but nobody cared.

Some young people had an excellent idea, they opened a "day care" for dogs ! Of course Nicole wanted to visit it and we went to the opening. 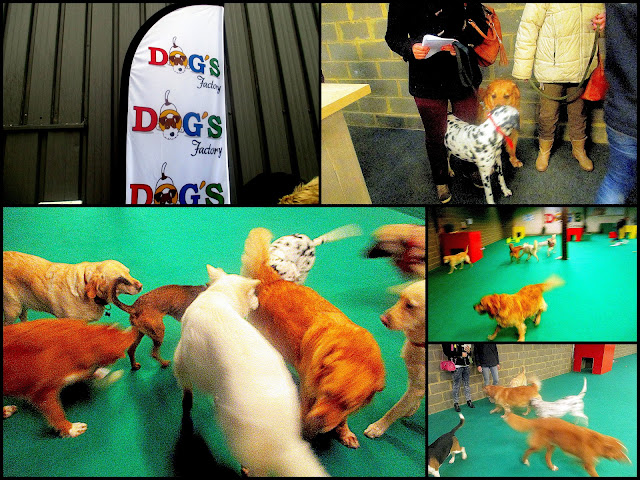 There were so many people there with their dogs of all sizes ! But the big once had their own space and the little once were apart. Charlie had a lot of fun and the dogs played all together, there was not one who got aggressive ! Charlie flirted with a Dalmatian lady. After a while he had enough and we went home. I think it's not a bad idea at all, some dogs just can stand to be alone the whole day when their owners are working.

Sunday afternoon Mr. G. went with me to Ilona to upgrade her computer from Window 7 to Window 10 ! It took 2 1/2  only to download and then all the rest ! Ilona and I meanwhile chatted and from time to time she looked what he had done, and then finally after another 2 h everything was up to date and she was very happy ! He had done the same with mine and I have to say I have only noticed very few changes compared to my Window 8.1, but besides Internet using and emails I don't do very much with a computer ! It's mostly my typewriter for my blogs and photo storage.
Posted by Gattina at 06:30 2 comments: