I am still in energy saving mode and besides reading blogs and watching TV I forced me to do my weekly shopping, met a neighbor in the lift who complained about piling up cartons in the garage. I agreed with him and then he complained about other things which apparently don't work in the building but which I hadn't seen. I let him talk but by the time I finally was in my apartment I had already forgotten what he had said.

I put all things I had bought in the fridge and stated with horror that I had forgotten Princess Rosie's cat food ! That was a crime ! Fortunately I had enough for the evening and thought I do it tomorrow my energy reserve was empty ! I needed a recharge on my sofa ! 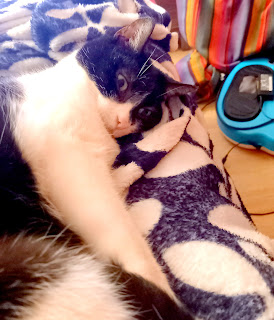 Rosie lives her life as usual she is in energy mode the whole year and settled down on my lap.

The next day I quickly bought Rosie's food and as it was so cold and windy I returned home immediately.. In the afternoon Adeline came over and of course we talked about the actual situation which means since Putin has done his marching in to Ukraine, the Corona Virus as disappeared from our TV screens. We don't know anymore the statistics how many hospital beds are free for Covid newcomers, how many died and how many left the hospital. We don't even know if the mask rules are still the same !

Late afternoon I went to my doctor lady, and as she had put  me at the end of her consultations (probably on purpose) I told her all about my booboos and she listened, told me what to do and gave me some medication against stress. 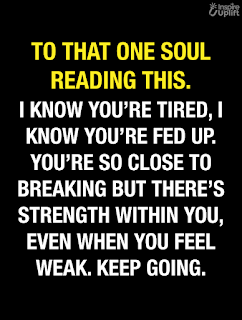 In short she told me something similar like the quote above, strange because a blogfriend had sent this to me two weeks ago.

When I brought Rick his personal laundry, already at the reception they told me that he wasn't feeling good at all and that he ate in his room instead with all the others. He was in his room and slept. I put the laundry in his closet and tried not to wake him up, but suddenly he opened his eyes and saw me. He wanted to sit up, but it didn't work, so I told him to continue to sleep and that I would come back another day. My doctor had told that I don't have to insist, that his condition had worsened and that I should now think of myself first and not make me ill. It's not easy but I have to try.

Fortunately Nicole's brain cancer doesn't show any signs, she feels, and looks very well. It seemed to me she has won over the cancer, she has no chimeo therapy anymore. I was so happy to see her in this state and she really was like before the cancer was detected ! Hopefully it will last, I would feel less alone. She has invited me together with my neighbor Adeline, for the first time this year we could sit on her terrace outside it was 20 ° ! 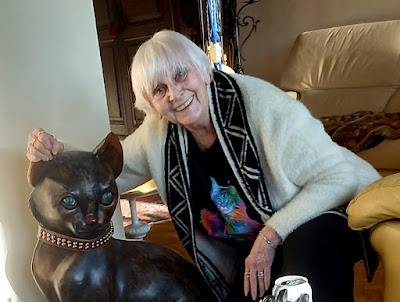 Adeline took a picture of me besides the wooden cat sculpture, which is very heavy and sits besides the open fire. She also took photos of Nicole and me but I don't know what happened there were no pictures of us !

We had a very nice afternoon and could forget all our worries. Laughing is still the best medication ! 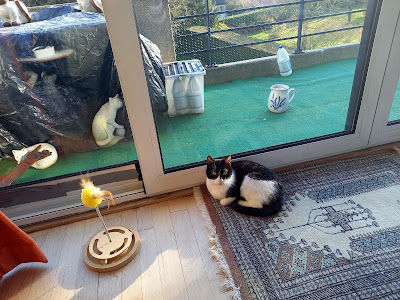 When I came home and told Rosie to go out a bit, she refused, she prefered to stay inside and watch the birds from there.

1. Somehow it's March? Is it coming in like a lion where you live? Tell us one fun thing on your March calendar.

March doesn't come in like a lion where I live, it's rather like a turtle. We have the same weather  from autumn til now and even further probably,  the whole year long with some little breaks where it's hot and the sun is shining. You don't even need  summer and winter clothes it's cold and rainy all the time. In the past we had real seasons and I put my winter clothes away now my closet looks the same the whole year long. And the only "fun" thing is that weeds start growing and maybe some flowers.

For the moment I don't have an own drum,  I walk more to the rhythm of a lullaby

3. The Hodgepodge lands on Dr. Seuss Day (March 2nd). Do you like eggs? How about ham? Share a favorite quote from one of his books. 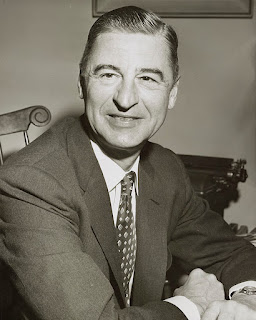 Thanks to this question my general knowledge was enlarged ! Now I know that Theodor Seuss was a writer, poet and cartonist. and was born on March 2, that's why he is celebrated on this day. I had heard about Dr. Seuss thanks to my My cats and funny stories blog, As some cats celebrated the Dr. Seuss day I always thought it was an American cat story. Now I know, thanks to Google and Wikipedia. Here in Belgium it's not celebrated, but I love eggs and ham for whatever reason.

4. Have you read Little Women? How about Alice in Wonderland? Did you love them, like them, feel just eh about them? Why is this question in the Hodgepodge today?

I have no idea why this question is in the Hodgepodge today, but I know Alice in Wonderland very well when I stayed in OXFORD (my travel blog) I had the oppportunity to see where she lived how she looked and the little shop where she used to buy her sweets was still there .... 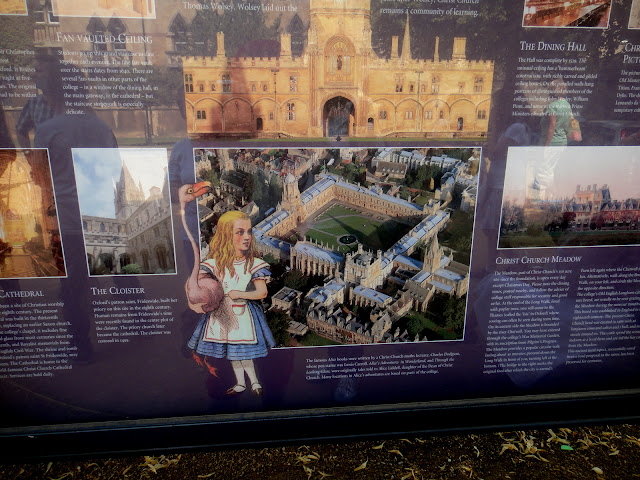 5. How do you meal plan? How often do you shop for groceries? One homemade meal that was on your menu last week or is on your menu this week?

Since Rick lives in a retirement home and I live in our apartment alone, I don't cook anymore. I buy ready made food for one person which is a French brand and real excellent. As it is frozen I buy for the whole months and each day eat a plate from another country ! Yesterday I had a Couscous from Morocco, and the day before Ravioli from Italy. Besides that I eat cheese sandwiches for lunch with tomatoes or cucumber and appels. Shopping I do once a week.

The corona virus has been gone since Putin attacked Ukraine. All day long you only see ruins, fleeing people and the rubble on the streets instead of Corona Virus statistics, The rules which changed all the time, once we were locked up, then set free under a lot of conditions so that a lot of people  got confused. The result was 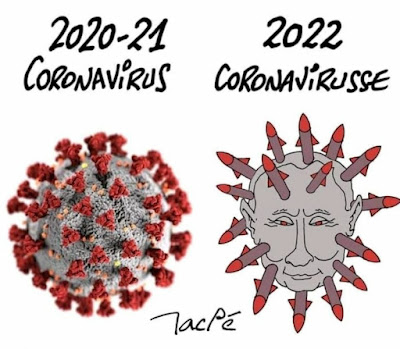 Why can't we live in peace, and why doesn't the Corona Virus and all its variations don't move and stay forever in Putin's fortress ? There it would be certainly safe and could infect all body guards for a start !

Nobody wants war today except crazy mentally sick people ! As behind each soldier stands a mother, and the Nationality doesn't matter they probably prefer a son alive then a hero !  I in any case I don't want a war hero as son I want him alive !! And Russian mothers probably too ! I hope that the economic measures will force Putin to withdraw. 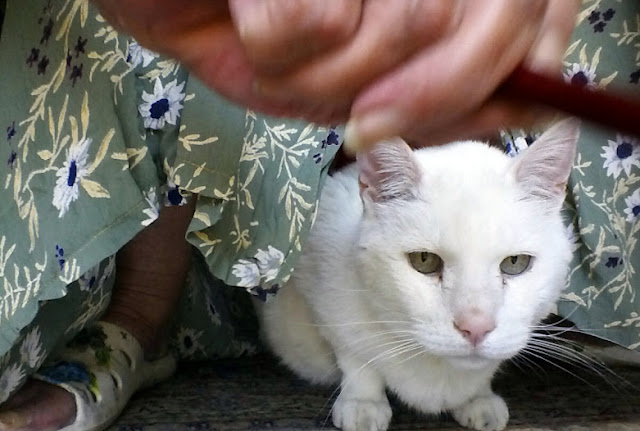 What's going on in the world ? 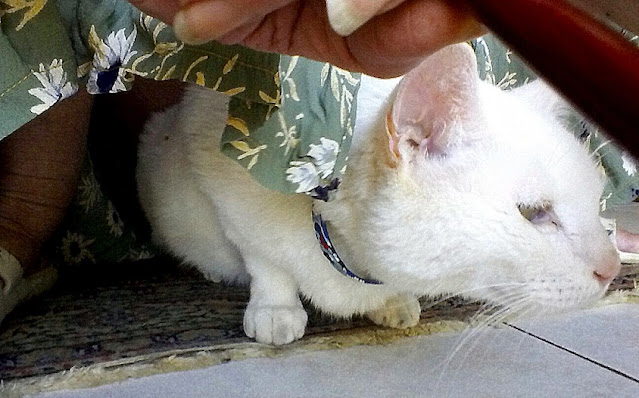 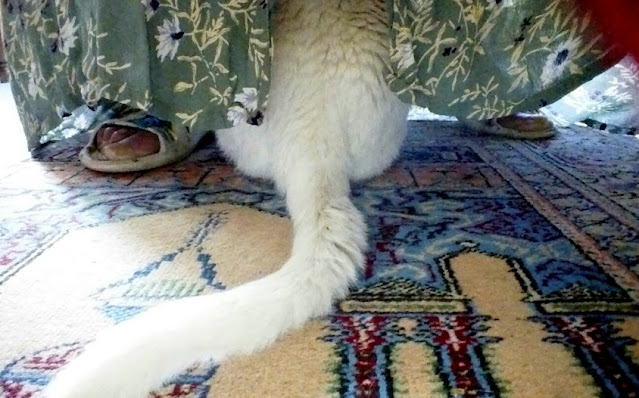 I better hide and sleep where nobody sees me !

more participants here, and Image-in-ing
Posted by Gattina at 06:00 5 comments: 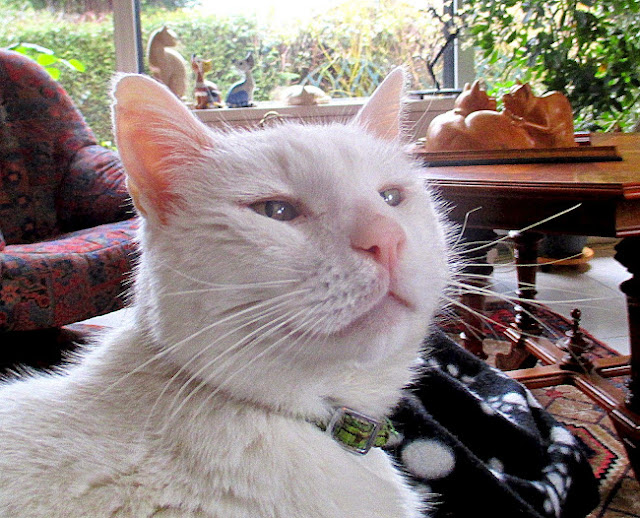 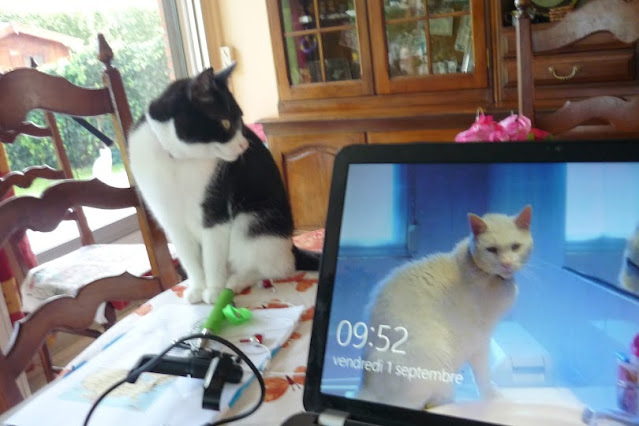 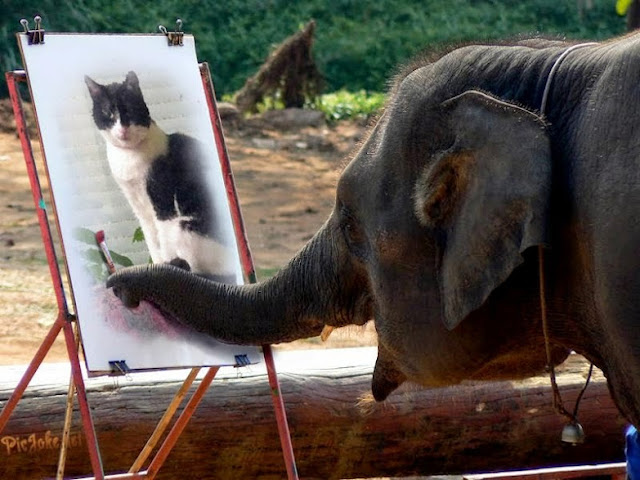 This weekend we were spoiled ! The sun was shining. Unfortunately there was a cold wind and I had difficulties to breath outside and did some phone calls to Italy. Rick's sister who is 10 years older and is now 91 still lived with her daughter, but since a month she is in hospital because once again she fell. Now the poor girl looks for a retirement home which is rather difficult to find in Italy  because it's still the use that old people stay with their children until the end, especially in little towns or villages. The public once were awful, and the private once very expensive. The Covid rules didn't help either but now she has found one which looks nice and is above the Garda Lake, where we spent our holidays for 15 years when our son was little. 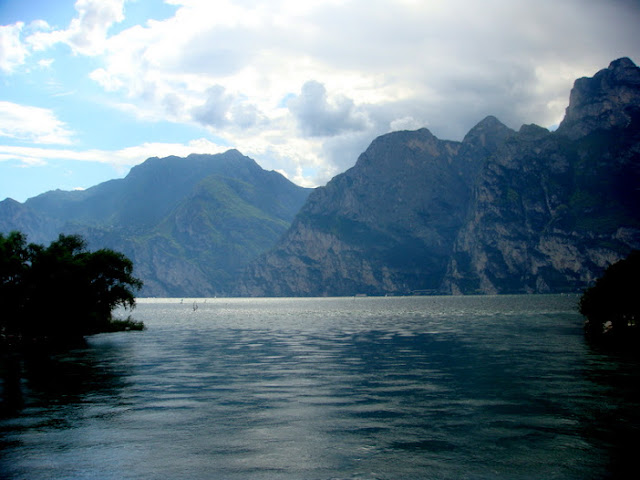 In the afternoon I visited Rick. As usual, he complained that I put his laundry in the closet instead of talking to him. Of course I talked, but he claims he didn't understand anything because my head was in the closet. I spoke as loud as I could. Then he wanted to go down to the drawing room and then again he didn't. His walking is getting worse and he will soon be in a wheelchair.

After my visit I was so stressed that I didn't do anything anymore even though I still had to go shopping. After I also slept badly I decided to make an appointment with the doctor tomorrow, in any case it can't go on like this.

My son sent me again some pictures from his ski holidays, unfortunately Toby had broken his thumb on the last day, fortunately it was the last and not the the first and has his arm for 3 weeks in a kind of cast now. He was very disappointed that he couldn't ski the last day. 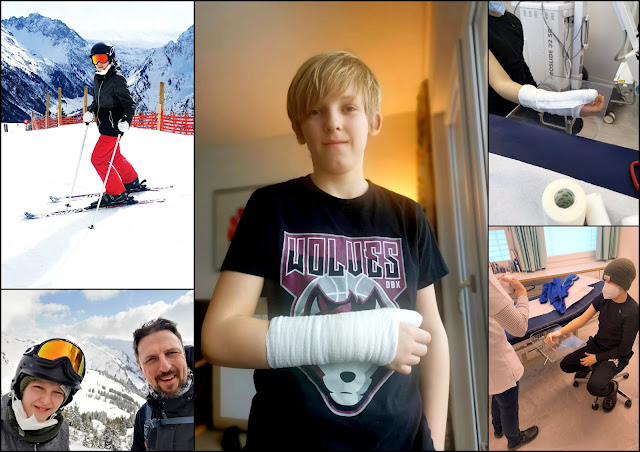 Sunday I got up late, it was nice and warm in my bed while outside the grass was white, it had been freezing this night.

As the sun was shining and it looked very inviting to go out somewhere I googled to see if there was something where to go. But when I checked the temperature on the terrace there was a strong cold wind and it was really not warm at all.

Finally I enjoyed the sunshine in the living room,  flooding through the window doors and as I knew that Adeline was alone too, I called her to come over and share my sunshine and a coffee. Finally we had a very nice afternoon and watched on TV how cats and dogs were adopted and found a new home. Adeline loves animals above all and was happy that this afternoon 5 dogs and a number of cats were adopted. 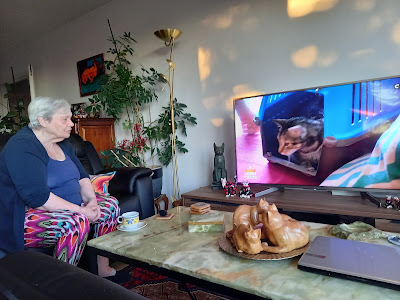 Here a cat is adopted

When she was gone I finished my computer work and then listened a bit to the News, but it made me so angry because except of the crazy war in the Ukraine the Covid was completely forgotten and the Russian soldiers could enter without masks and vaccines ! (joking) It's a crazy world. I am happy that I am not a Teenager anymore they have already lost two years of their lives. 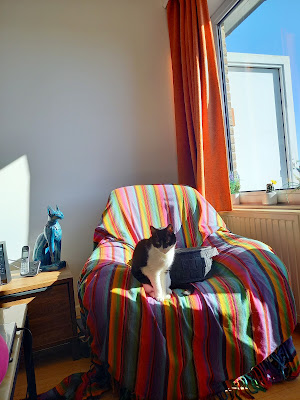 Only Rosie has no worries and enjoys the sunshine 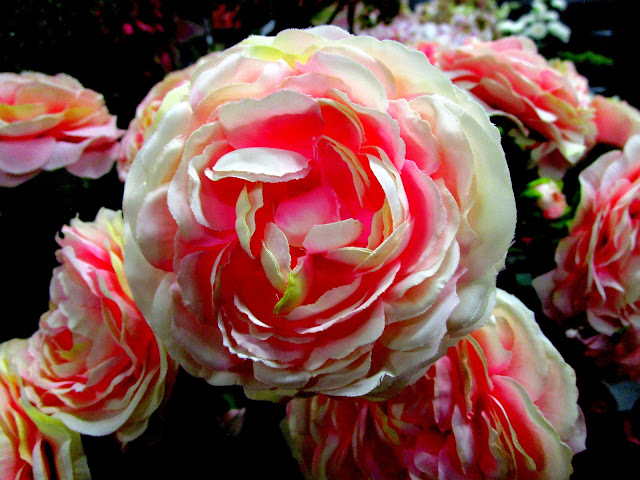 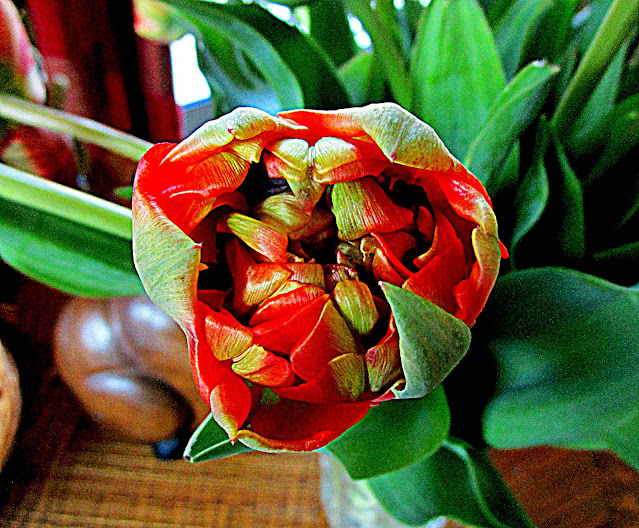 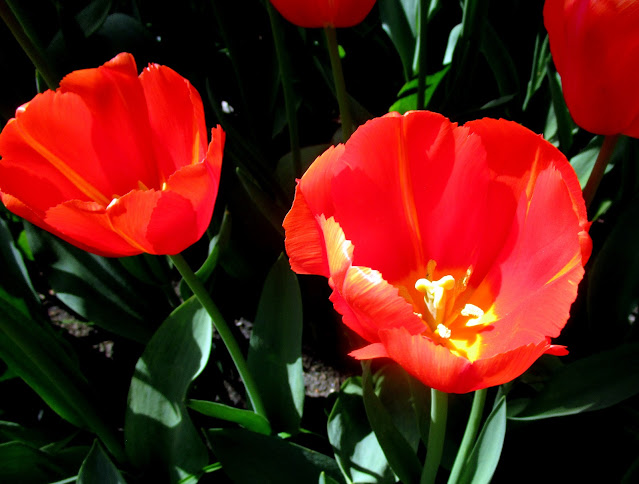 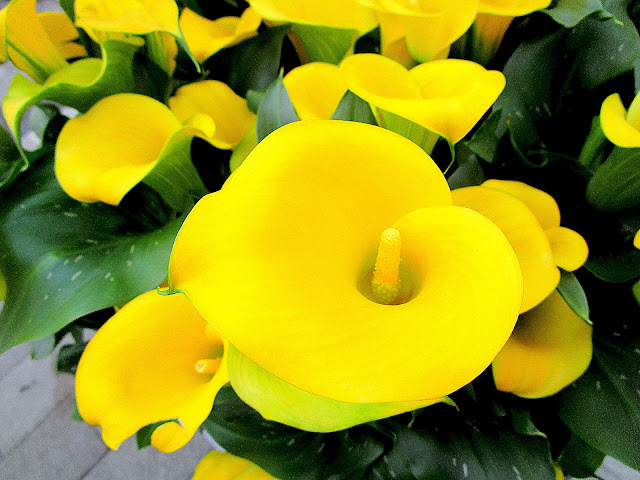