1. Ever since I had moved my desk under the window, I became "Big Brother is watching you" only that in my case I am the big sister ! I never thought that so many people walk their kids and dogs through our little street !

They are mostly grandmas and grandpas with their grandchildren. Our house is always a long lasting stop. 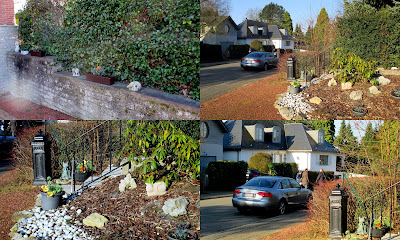 The little children love my little cat statuettes and always pet them, especially the one sitting besides the letterbox. Sometimes I hear cries or even real tantrums when the naughty grandpas or mas want to drag them away.

While I took these pictures, I saw my neighbor with his new dog showing him to other neighbors. The dog is rather big and a mixture, 6 years old and he had got him from a shelter. At least for that he is a good man, because otherwise he is in war with almost everybody in the street !

2. Each time I go to my friend Dominique next door, cat Arthur thinks that I need a body guard and comes with me. 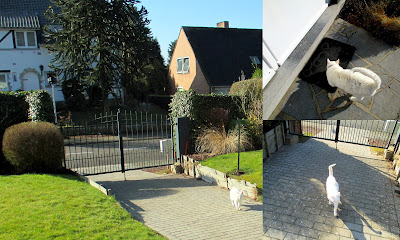 He walks me til the entrance, does his pedicure on the doormat and when the door opens he disappears. Dominique had asked me to help her with sorting out her photos on the computer, she had quite some difficulties.

3. Each time the sun shows its nose, I need to go out ! Dominique feels the same so we went for a walk through the neighborhood. 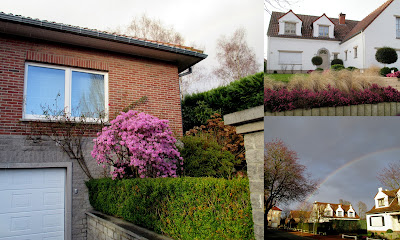 We were surprised to see so many plants already blooming and even had the opportunity to see a beautiful rainbow.

4. I visited Ilona, she wanted to show me her freshly painted living room. It looked like new ! 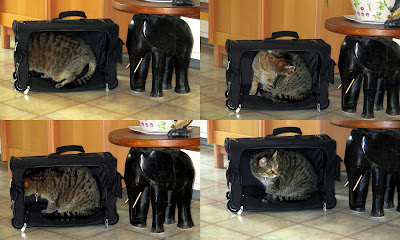 I also brought her a cat carrier which Nicole doesn't need anymore and the cat settled in there immediately, apparently not knowing the use of this thing !

In the evening I went with Dominique and Nicole to the cinema and watched a hilarious movie, with the title "The super hypochondriac".  The title says it all ! Our bellies were hurting when we came out and had a little supper in an Italian restaurant. I was so hungry that I forgot to take pictures of this nice place in a very old house in a small street in Waterloo.

5. My son and grandson announced their visit for this weekend, so I had to go shopping and fill in the fridge for 2 and a little half men all with a good appetite !

Sunshine and nice weather have also their negative side, you suddenly realize that a lot of things are dirty ! Therefore after shopping I continued (and finished) to scrub the rest of the terrace and the long entrance to our garden with water and chlorid, and hope that the moss is all gone. 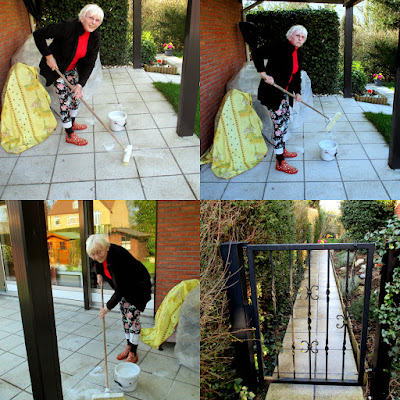 After that I was exhausted and collapsed behind my computer with a cup of coffee !

More participants here at A rural Journal.
Posted by Gattina at 06:30 22 comments:

When I was a 7 year old little girl, my parents and I lived in Bonn which at this time was the capital of Germany. We lived in a 3 floor building which had been built in a hurry for the employes of the different government ministries. My father as he worked for the ministry of economics was lucky he got an apartment for his family while other people were still living in the basements of their destroyed houses, were squeezed together in still standing houses or in the bunker which stand nearby where we lived. It was only 6 years after the war and Bonn had been severely damaged through bombings.

There were 6 families living in our building, all couples and two with children, only one single lady was living alone on the first floor. Of course to me as a child she was old. I have no idea if she really was old, but she was strange, very skinny and pale looking, always dressed in black, and had short black hairs. The children were a little afraid of her, she didn't like kids and always chased them away. She had no contact to the others in the building, who formed a nice community and helped each other in these difficult times.

But one day she opened her door when I just wanted to go up the steps and called me in. Although I wasn't shy I didn't feel very comfortable with this odd looking woman. She was, as always dressed in black. In her hand she held several handkerchiefs of different colors and led me to a mirror.  She put a green one under her nose and asked me if it would match her complexion. I was a little startled  and didn't know what to say, but as she wanted my opinion so I told her that with this color her skin looked rather green around her nose.  Apparently she agreed and took a red one. I didn't like the red one either. Finally she choose a purple one, with white laces around and had some embroideries. It looked really funny and I had difficulties not to giggle. Suddenly I was in a hurry to leave this strange place where somebody made a fashion show with handkerchiefs ! So I told her the purple one looked perfect and suited her nose very well. She seemed happy with my advice, put the other handkerchiefs away and kept the purple one. Then she thanked me and relieved I hurried upstairs home.

When I told this story to my mother she had to laugh too. And still today after 53 years I haven't forgotten this event. It has happened only once in my life that somebody asked me if a handkerchief suited her complexion and if it looked well on her nose ! 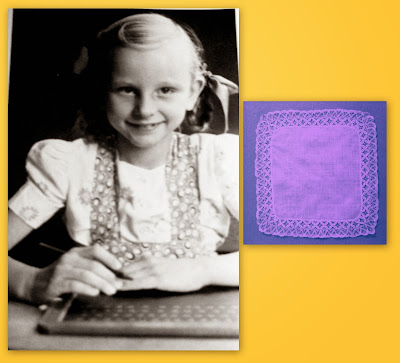 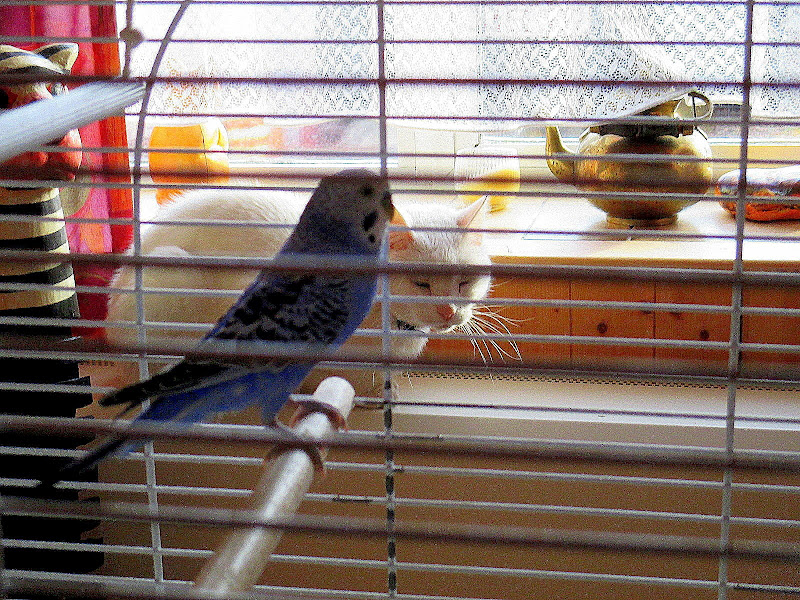 Each week I am writing about what had happened (or not) during my aqua gym, but I had never the opportunity to show you the place. 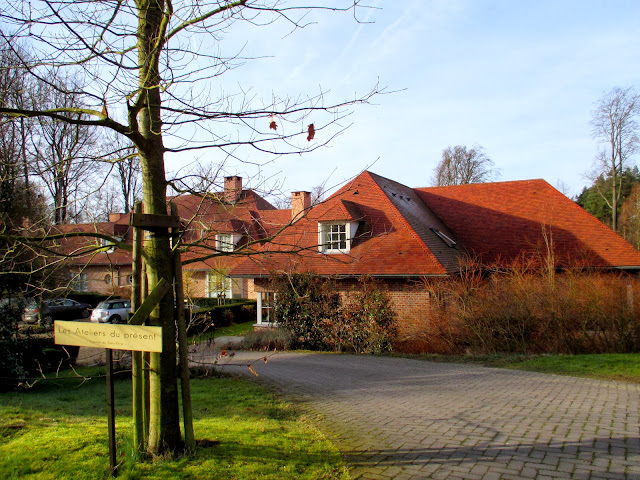 It is a big and beautiful villa, in which the classes take place. The owner is an ancient Belgian Tennis Champion, she also does the classes together with two other girls. The picture shows the entrance. 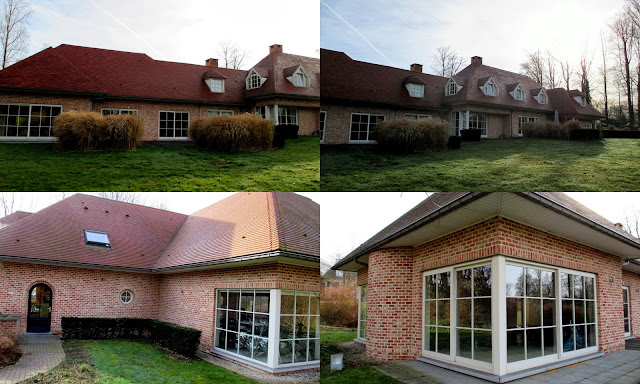 The other side of the house,  and behind these windows there is the swimming pool. 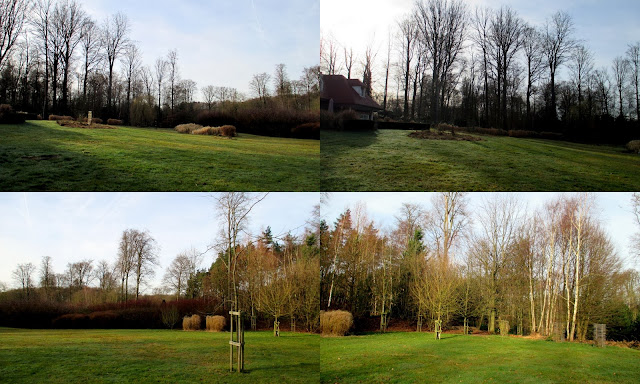 There is a huge garden (yard) behind the house, and from the pool we can watch the seasons going by through the large windows in the swimming pool area. 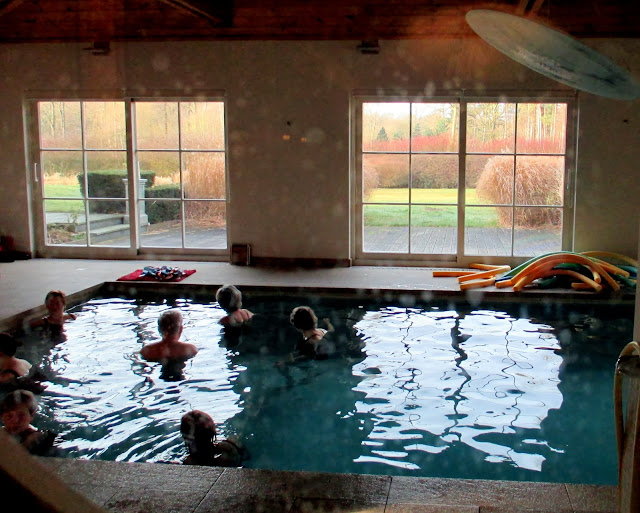 The pool in which we do our gym 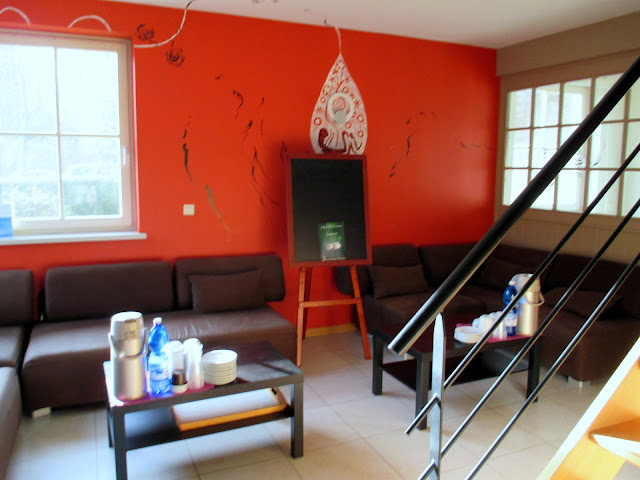 and the tea room, where we have our chats and tea after classes.

MY WEEKEND OF MARCH 1

After some blogging in the morning, I went with Ilona to her son's new scooter shop. The old one had become to small and the new one was nice and big. I bought a little Vespa from 1953 for Mr. G. as he is a little nostalgic, he had a Vespa as a young man and went on female tourist hunting with it. The Garda Lake in Italy was ideal for that. 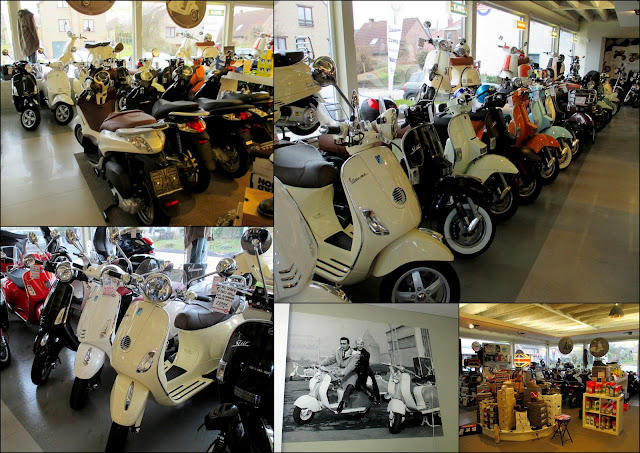 I am not a motorbike fan at all in fact I don't like them, but these Vespas looked so comfy, that I thought it would be ideal to ride one in the city. Ilona said that the picture below in the middle looked like Mr. G. and I on a Vespa ! We made a little tour, and looked at the other things on display, like shoes, clothes and helmets, said hello to her son and left. It was very cold and humid and we were glad to return to her home and had tea together with the fire burning in the stove.

On Sunday morning the sun was shining and for the first time the temperature was just around 0°C (32 F). I had heard in the News that we had the warmest winter ever since weather was recorded, the average temperature during whole winter was just - 0,5°, and instead of snow we had a lot of rain.

I took the bus to the Brussels Midi market, which was packed because of the sunny weather. I bought grapes for less then half price, and a pajama, sat on the terrace of my usual café and chatted this time with a Greek lady. She spends winter in Greece and summer in Belgium.

After lunch Nicole and I decided to walk Charlie in the nearby La Hulpe park. It was rather the other way around, because he walked us. 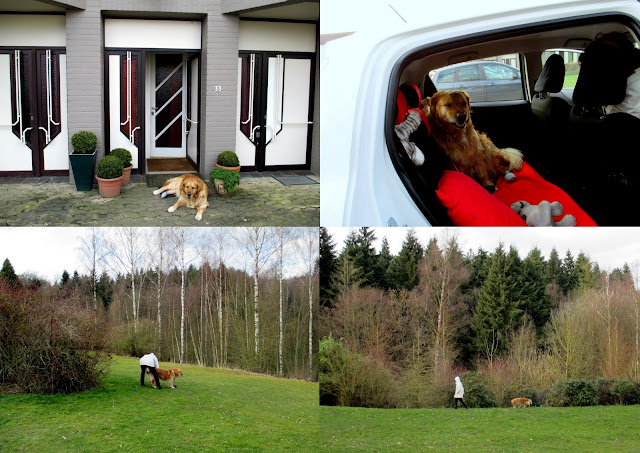 He was sitting already in front of the house door and waiting and then was happy to ride in my car, as Nicole's had a flat tire. I was not used to have a big dog head laying on my shoulder while I was driving. That was really fun ! I am not sure if he didn't tell me the direction instead of Mrs. GPS. 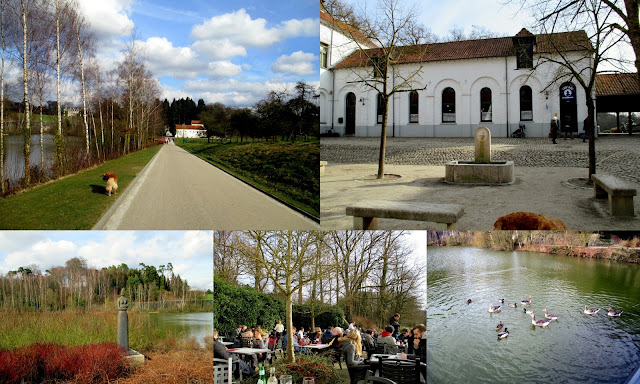 After a not so long walk, Charlie is a rather lazy walker, we wanted to have a coffee on the terrace of the restaurant, as usual. It was full, and after having waited 45 min for our coffee which still didn't arrive, we left, because we started freezing. The waiter was not in sight.

We returned home to Nicole's and had our coffee there in her warm living room. I certainly had enough sunshine and fresh air this day !