This week I was really spoiled ! I got two emails ! One announcing me that I won 1 mill £ in the British lottery ! Now isn't that something ? The whole evening and night I was thinking of how to spend all this money and found out that really I had no use for it. But then in the morning I got another email, this time a company offered me to buy land on Mars ! Imagine ! I living on mars and with my win I had the money to buy the whole planet because the land was very cheap ! But then I thought it over, what is on Mars exactly ? I had heard in the news that there is water so there must be a sea which I love ! But are there also cats ? and how would Mars cats look like ?

What a difficult situation for me ! I racked my brain over and over !

Like this ? A little boozed and a little curious ?

As I could buy the whole planet I would be a kind of Queen of Mars or Mrs President without elections !

After a careful consideration in all directions I finally found the solution !

I wrote the British lottery with the email address they had given me. I wanted to stay anonymous because of the generous decision I had taken ! I told them that they could keep the money, that I really don't need it and at the same time I gave them the address of the company where they could buy land on Mars ! I thought they will be very happy that they can keep the money and do a good investment on Mars.

To the Real Estate company I answered that British lottery will buy the whole planet because I had decided to stay here on good mother earth where I have the sea and mountains, and not to forget, cats !

I also advised the friendly person who asked me to invest 1 mill $ for her to better keep it and put it under her matress because of the actual bad situation on the financial market. I think this was only my duty to tell her

The weather was bad cold, rainy, grey so I needed something blithful to cheer me up and inspired by my American blogfriends especially Hootin Anni who is a Halloween fan, I also fell in Halloween feever and decorated ! 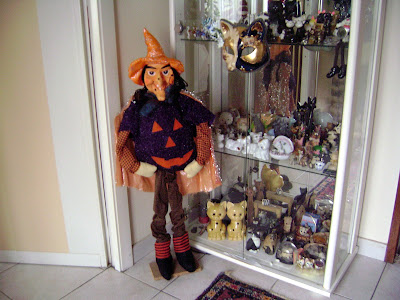 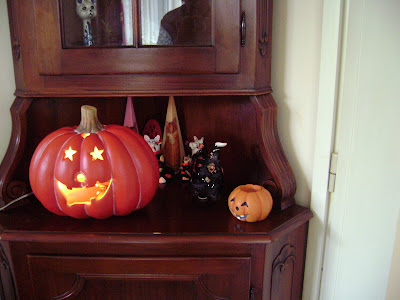 I bought this pumpkin and put a light inside 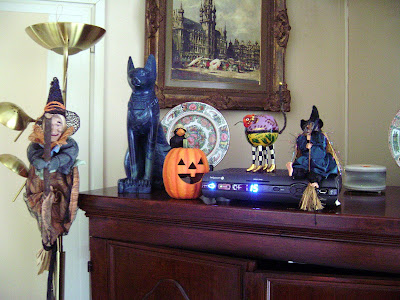 Some witches on the TV set 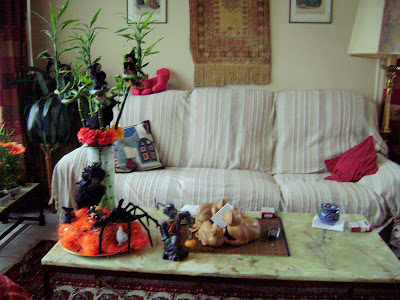 A spider on the living room table 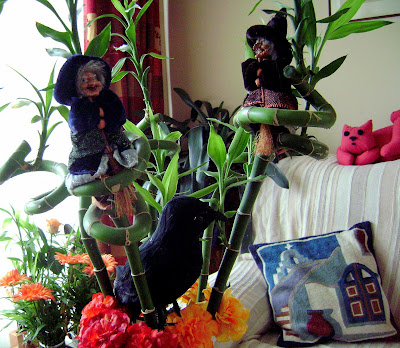 together with a raven 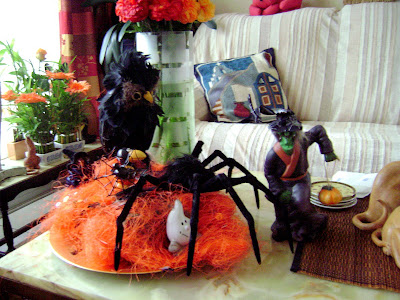 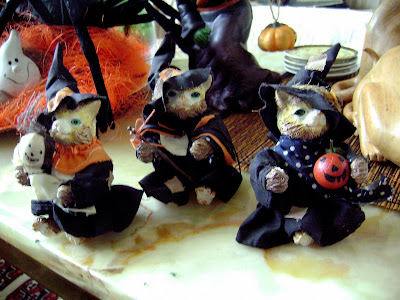 little cat witches a gift from long ago, 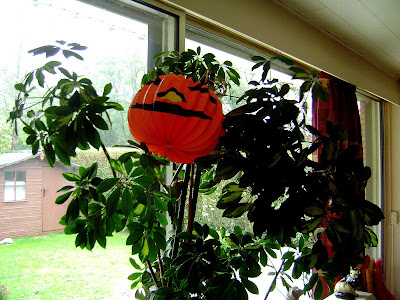 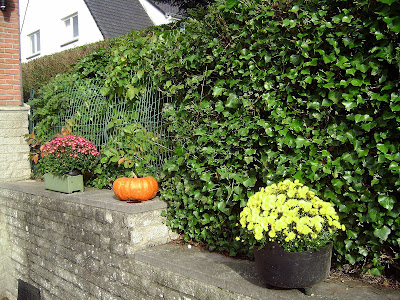 Outside flowers and a pumpkin so even when it's grey there are some colorful spots ! 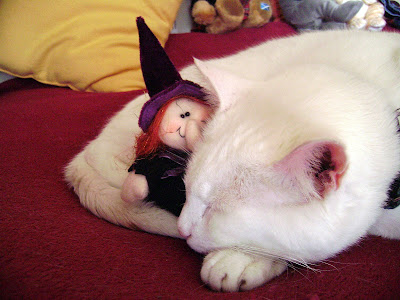 The only one I couldn't decorate as a Halloween cat is Arthur ! He remains white and white definitively is no Halloween color !

Now Mr. Gattino fears that I would dress as a witch the last week before Halloween and scare the neighbors to death.

My friends simply think that I am reasonably crazy as usual, because they don't do any Halloween decoration. Its not the use over here.
Posted by Gattina at 06:33 21 comments:

2. Politicians are the same all over. They promise to build a bridge where there is no river.

4. Politics is perhaps the only profession for which no preparation is thought necessary.

5. In Mexico, an air conditioner is called a 'politician,' because it makes a lot of noise but doesn't work very well.

6. There is hardly any difference between a piano-player in a whorehouse or a politician.

7. Politicians are wonderful people as long as they stay away from things they don't understand, such as working for a living.

8. Giving money and power to government is like giving whiskey and car keys to teenage boys.

9. A good politician is quite as unthinkable as an honest burglar.

10. A politician is a fellow who will lay down your life for his country.

11. We would all like to vote for the best man but he is never a candidate.

12. The art of politics consists in knowing precisely when it is necessary to hit an opponent slightly below the belt.

13. There is one sure way of telling when politicians aren't telling the truth—their lips move.

Some of the penguins are thought to have travelled 3,000km. Hundreds of penguins have been returned to their native territory in the south Atlantic ocean by an air force plane after being found along Brazil's coast. I am really happy that the penguins landed in Brazil and not in the USA ! can you imagine the work of the anti terrorist department to check hundreds of penguins if they are not carrying weapons or plans for terrorist attacks ?

WRIGHT CITY, Mo. - The Elvis is Alive Museum will not live, at least not for now.
Andy Key tried to sell the Missouri museum twice on eBay. He received no bids by the time the auction ended Friday. He did get one bid at his first asking price of $15,000, but it turned out to be from a child playing on a computer, the St. Louis Post-Dispatch reported. If you have some money left from the economical crises, here is a sure investment to make !

Once 1,230 pounds, Uribe was declared the world's heaviest man

Manuel "Meme" Uribe, 42, kisses his girlfriend Claudia Solis during an interview with the Associated Press in Monterrey on June 9, 2008. Once declared the world's most obese man, Manuel Uribe is getting hitched. The Mexican native says he will wed longtime girlfriend Claudia Solis on Oct. 26 in Monterrey. The two will be married in a civil ceremony at a location still to be decided. Uribe is unable to walk, and leaving his house means being towed through the streets on his specially made bed. Love can fall everywhere. Hopefully he is still able to make babies, although I think they might have some technical difficulties.

The olor is held in place by a rope or an elastic strap. Maasai herdsmen in Kenya have turned to an age-old contraceptive device, the "olor", to protect their precious goat herds from an ongoing drought. The olor is made from cowhide or a square piece of plastic, and is tied around the belly of the male goat.It prevents the bucks from mating with the female goats.
Doesn't that look sexy ? I think a fashion creator should adapt this for men maybe in different colors and with little flowers ??

Recycling litter funds honeymoon
A couple spent three months collecting and recycling litter to pay for their honeymoon flights. It took thousands of cans and bottles to a recycling centre. For every four recycled items, they earned a reward point which was then converted into BA air miles. They amassed 36,000 miles, which they used to fly back in business class from their US honeymoon. Isn't that a good idea, instead of taking a credit to finance your next holidays dig in your bin and collect money or flight miles !
Posted by Gattina at 07:39 11 comments:

FUN MONDAY - A VISIT BY MY MOTHER IN LAW

Mamma Wizdom asks for a "Wordzzle". I couldn't find the meaning of this word neither in my dictionary nor in Wikipedia but apparently our job is to write a story (true or made-up), poem, song, letter... whatever strikes us ABOUT one of the three themes. We must INCLUDE all 10 words. Wild cards (????) words may be used in addition to or in place of the main 10 words.

OK I choose the visit to the Mother in Law as Bed(time) stories belong to the past and bringing up teenagers too.

A visit by my Mother in law

My mother in law was an imposing woman ! she was very tall grey haired and had a big bossom. She could easily put a glass of wine on it without any problem. Never a cup of coffee, that's for sure. She always wore a big pink hat, even inside the house, with ostrich plumes who hang down to her nose. Every 5 seconds she blow them up and sneezed quite often. This was especially irritating when she spoke or when she ate her noodle soup. She spat the noodles out all over the table. Looking at her eating gave me goosebumps. Her cats were sitting around her and waited for some chicken pieces which were swimming in the soup. The oldest cat looked quite lethargic but woke up when she smelled chicken.

In a corner lay a stack of magazines which mother (in law) wanted to read after her lunch. When she had finished her meatballs and tomatoe sauce was all around her mouth, she went to the kitchen to pick up some biscuits and a bottle of tequila. She loved tequila very much and had always a couple of glasses in the afternoon. When she had to go to the bathroom, she usually was so nicely filled up with tequila, that she missed the doorknob and had to try several times until she could open the door.

I always was happy when I could go home and wondered if she would wear her ostrich feather hat in her bed at night !

PS. This MIL is a creation of myflowering phantasy filled mind !
Posted by Gattina at 05:46 23 comments:

This week I haven't been in some special place and anyway it has rained the whole week. Not so easy then to make weekly winners. But I found some ... 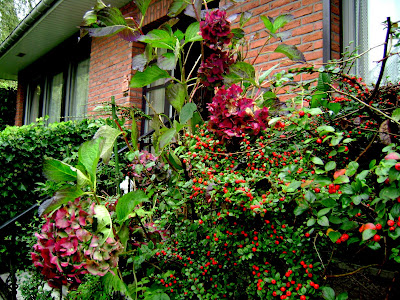 The automn looking flowers at our front door 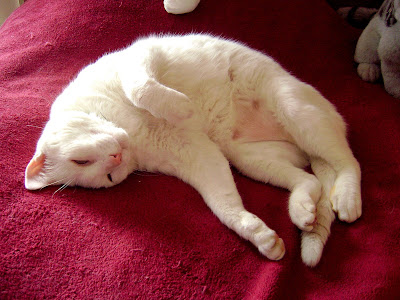 Cat Arthur resting on my bed 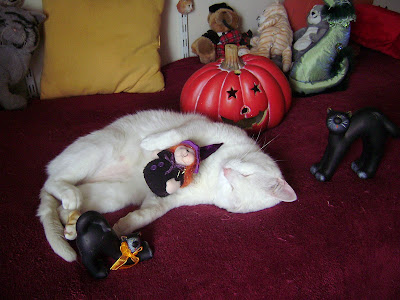 together with some Halloween decoration. 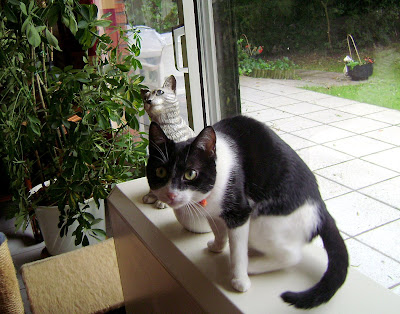 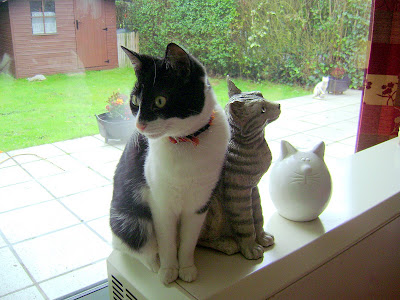 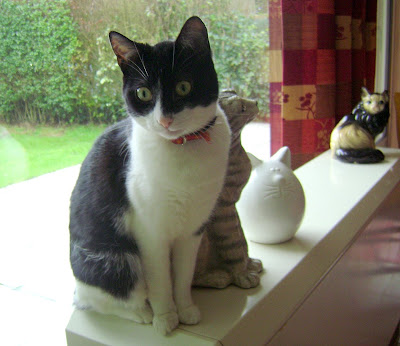 Rosie found it too cold outside and then she doesn't like rain, so she found a nice place on the radiator
Posted by Gattina at 06:02 24 comments: