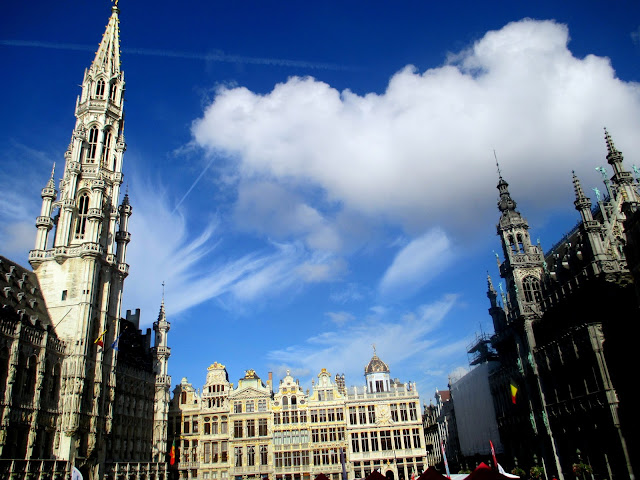 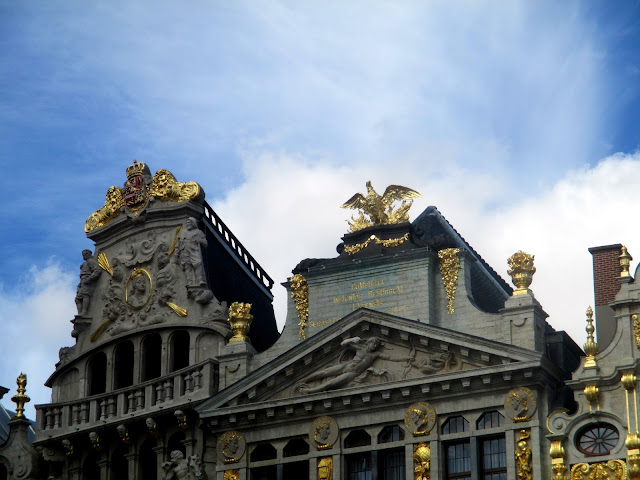 1. Another week  went by, I get the impression that when Monday starts, a few minutes later it's already Friday. ! 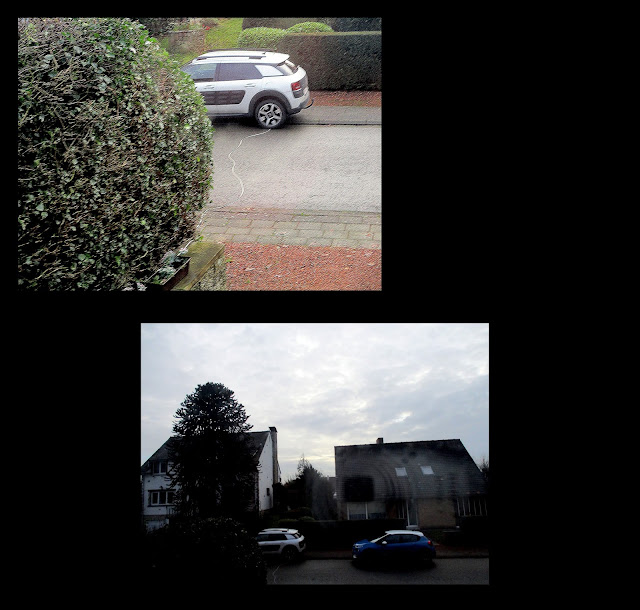 Our wifi is still laying on the street, it must be 3 month by now, the permission to open the street is in the hands of the city administration and there of course they work with the efficiency of a racing snail. I only hope that the cable will not break.

2. We started with our scrabble group again, during the two weeks Christmas holidays we were not fresh enough to play on a Monday !! This time it went a bit better with me, I was not the last but the third and we were five. 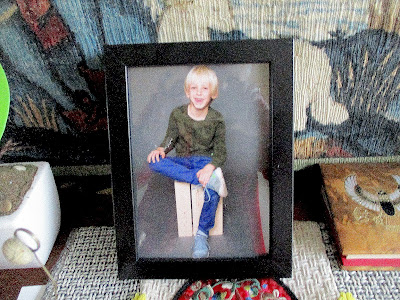 I found a nice place for the photo frame we have got for Christmas, just at the entrance. It is the official school "portrait" of Toby for the year 2017. He is now 7 ! 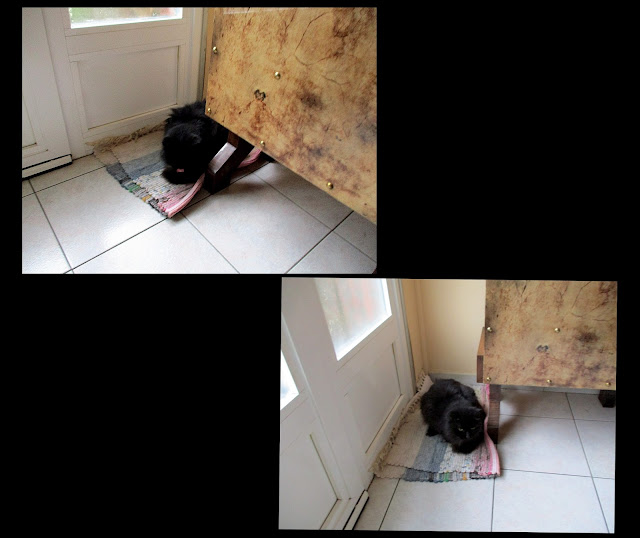 Our oldest cat (18) choose a strange place for napping at least 23 h per day, the entrance. Maybe she thinks that she is the watch dog cat of the house. Fortunately the doorbell doesn't ring very often, because then she runs away. And it's not the warmest place in the house either ! 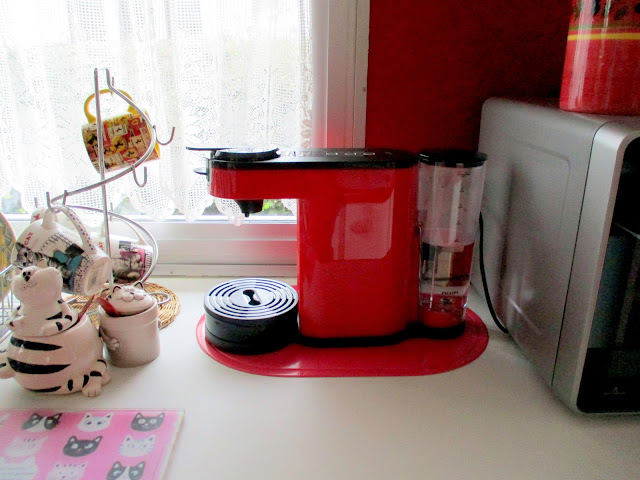 I had to buy a new coffee machine our old one died ! I bought the same Philips Senseo, but with this new model you can also make a coffee pot for 7 cups, or one cup, or two cups. Very practical. It works with pads. The coffee is very good.  With the old model we only could make 2 cups at one time, which was rather annoying when we had guests.

5. Our painting class has also started again an we were nearly all there. For the moment there is a flu epedemic in Belgium and lots of people are sick. I hope I won't get it anymore, just finished one ! 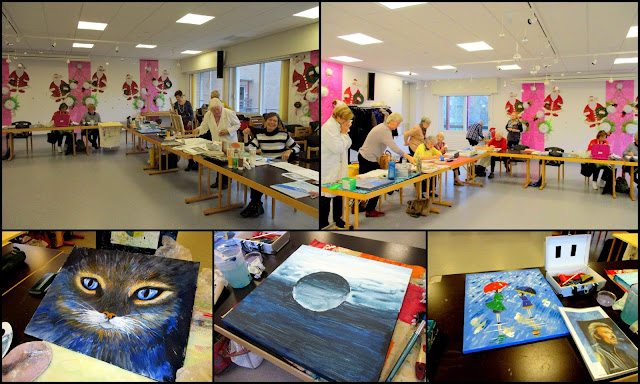 It was nice to meet again and there were a lot to chat about our year's end celebrations !

Now  the days are getting longer, if only the sun would show it's nose ! 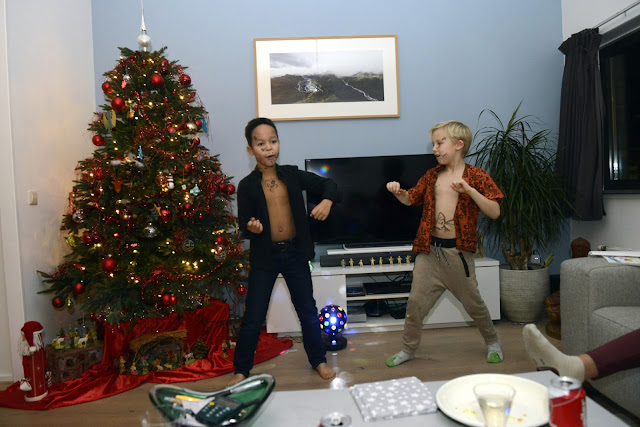 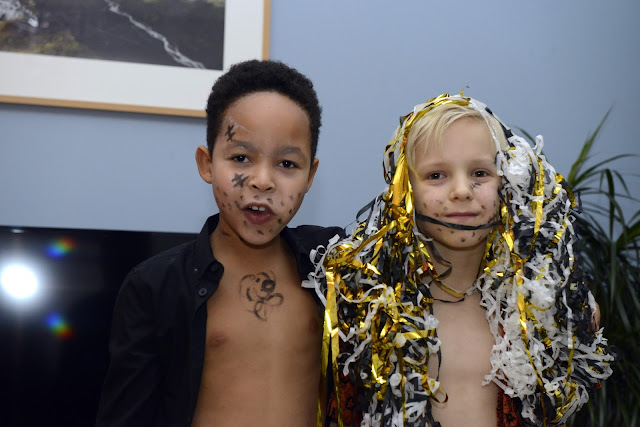 
1. January is National Mentoring Month. Have you ever had a mentor? Been a mentor? How would you rate the experience?

Can't rate any experience, because I never had a mentor or I don't remember, maybe I have been a mentor to somebody, but really I don't now.

2. What current trend makes no sense to you?

The sexual harassment witch-hunting.  Maybe it will get a bit better but I doubt that it will stop ! The line between agreement and harassment is very very thin, and both can easily be switched. Revenge has always been sweet ! In the 60th when I started working, it was considered as normal. Was up to you to refuse or accept. Men have harassed me but nobody reached his goal. I think it is a question of character and social situation. A woman in need is more vulnerable then one who doesn't need anything.

3. I saw a cartoon on facebook highlighting a few 'weird' things that make you happy as an adult. The list included-writing with a nice pen, having plans cancelled, freshly cleaned sheets, eating the corner brownie, cleaning the dryer lint screen, and sipping coffee in that brief time before anyone else wakes up. (Credit for the cartoon goes here) Of the 'weird' things listed which one makes you happiest? What is one more 'weird' thing you'd add to the list?

Sorry but I couldn't find the list in these cartoons. Anyway I love sipping coffee any time even if Mr. G. is up (he does the same) of course fresh sheets, driving through the countryside looking for good photos to make.

A self made marble cake after our scrabble game.

Going out, dancing a lot, having fun,  travelling and a job I loved !

I am so fed up being locked in due to the humid weather and rain ! 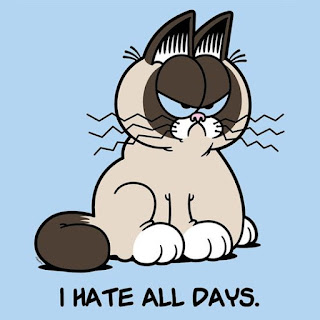 From this side of the pond
Posted by Gattina at 07:00 9 comments:

January in general is a rather boring month. There had been too much in December now people rest. I haven't been anywhere since the New Year started because of the bad weather.

So I thought to show you through a potpourri  of Waterloo near Brussels where I live. 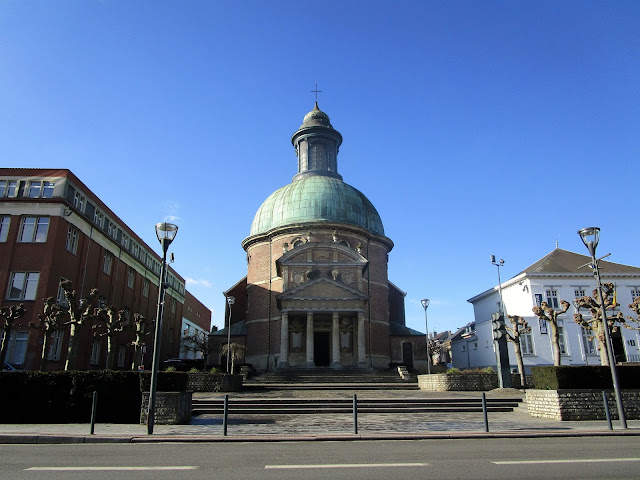 The main church where in 1850 the wounded soldiers of the battle were taken care of. There are a lot of British memorial plaques inside. 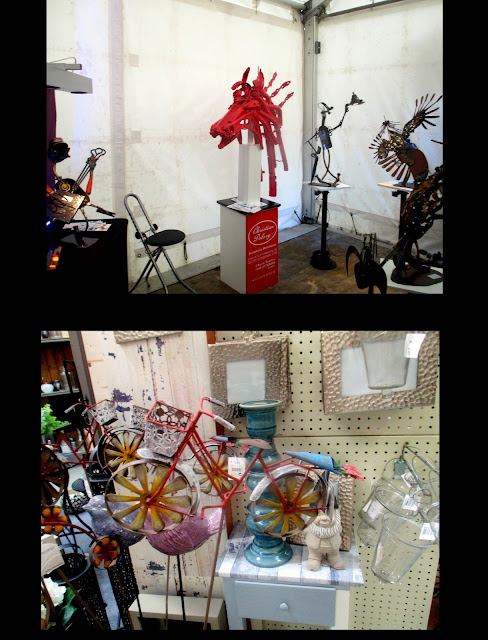 I saw this fancy artwork in a garden 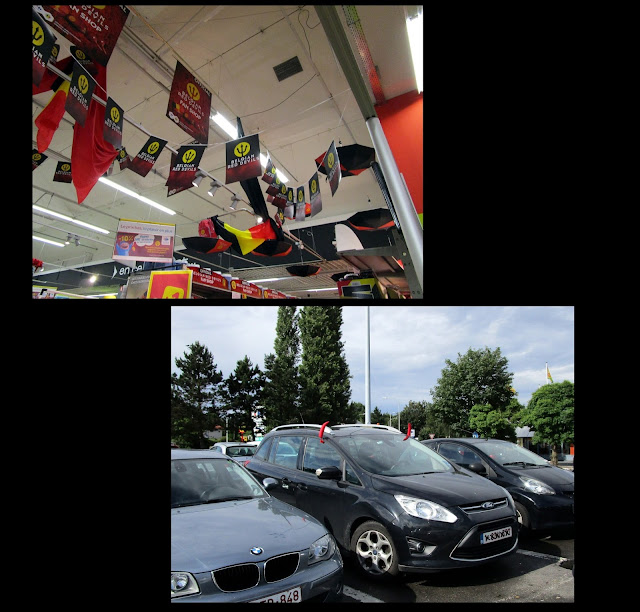 There was a very important football (soccer) game in Belgium and our city too was decorated for the Belgian team the Red Devils. Therefore the car here has red horns ! 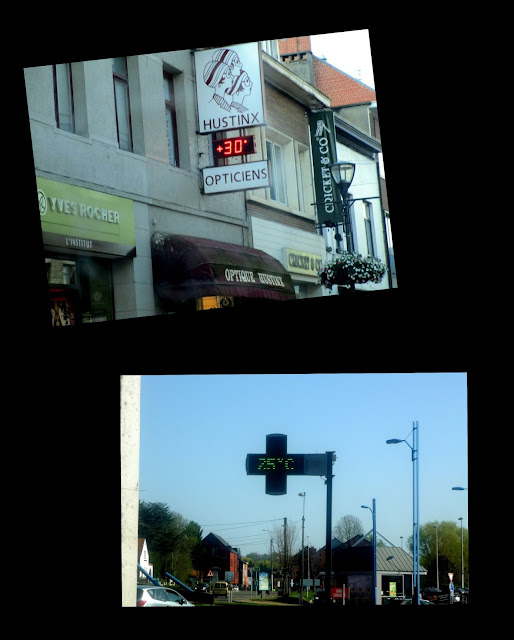 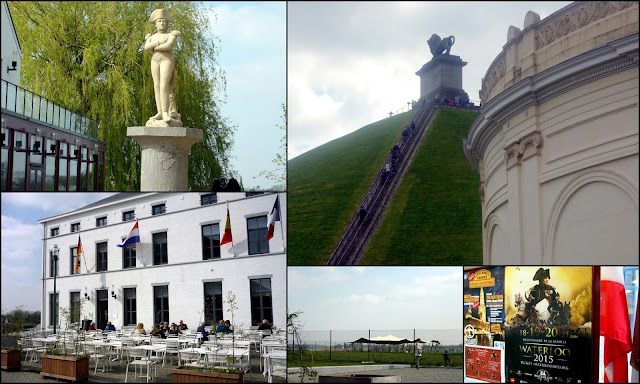 The site of the Waterloo battle. Wellington won, but you only see Napoleon ! 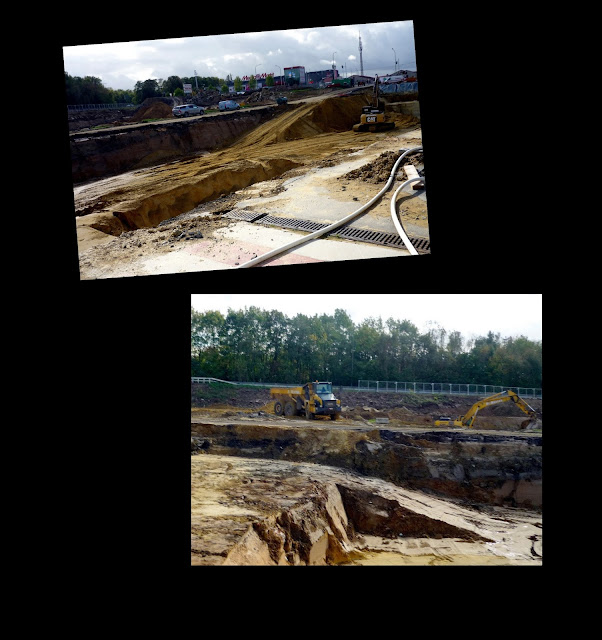 a lot of works are going on Waterloo seems to be the victim of moles ! 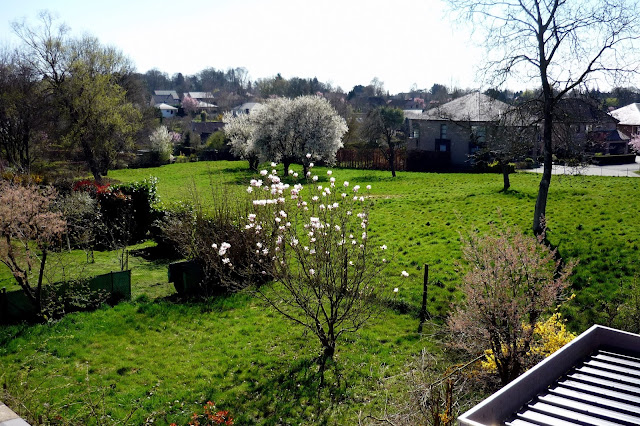 The view from my friend Nicole's terrace, I wished spring would arrive ! 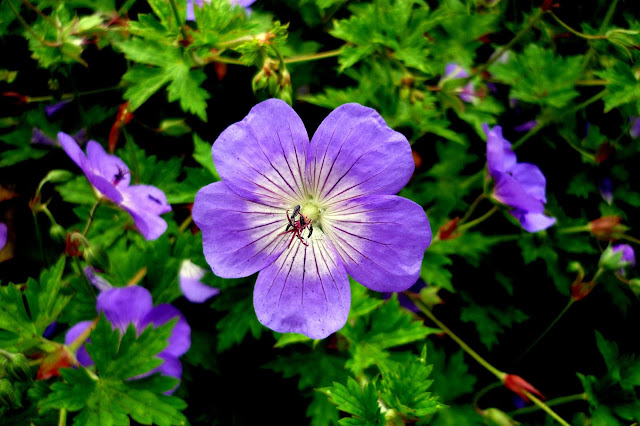 
When other countries disappear in tonnes of snow, but at least the sun is shining and the sky blue we are sitting (not dancing) permanently in the rain ! 12 h sunshine in one month, 2 h more then last month ! What a progress !

The result is that I still avoid to go outside because of the humidity. Fortunately it's the use here to invite or visit people to wish a "Happy New Year". My friend Bunny had invited the whole group from our New Year's celebration for a coffee and cake. 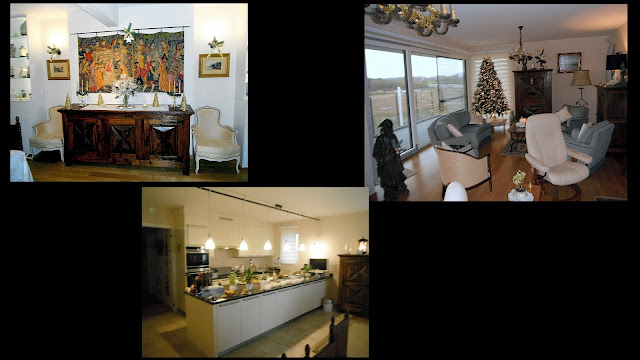 Everybody loved her new apartment which is very big and she had decorated it for Christmas in a very tasteful way. All in silver. 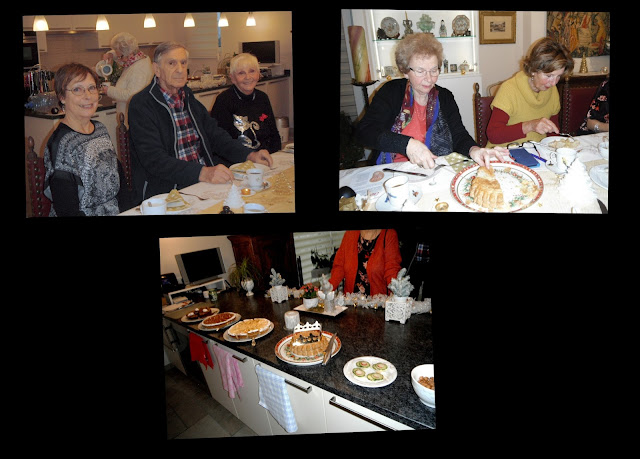 Chantal, Mr. G. I, and Nicole and Irene, enjoyed all these cakes !! The lady cutting the cake is nearly 80, has a laptop, a computer with tower and a smartphone ! So there is no excuse for old ladies ! 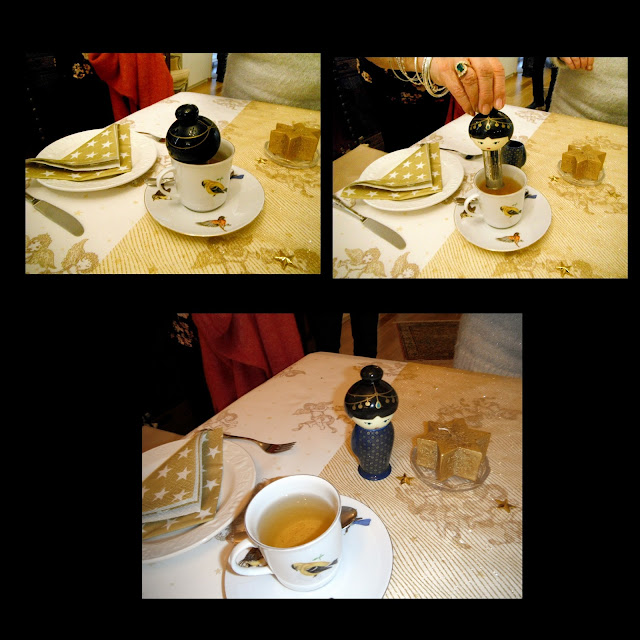 This is the cutest tea maker I have ever seen. First you see only the head sticking in the cup, then after the right time it's taken out and at the end you have a little Japanese doll. 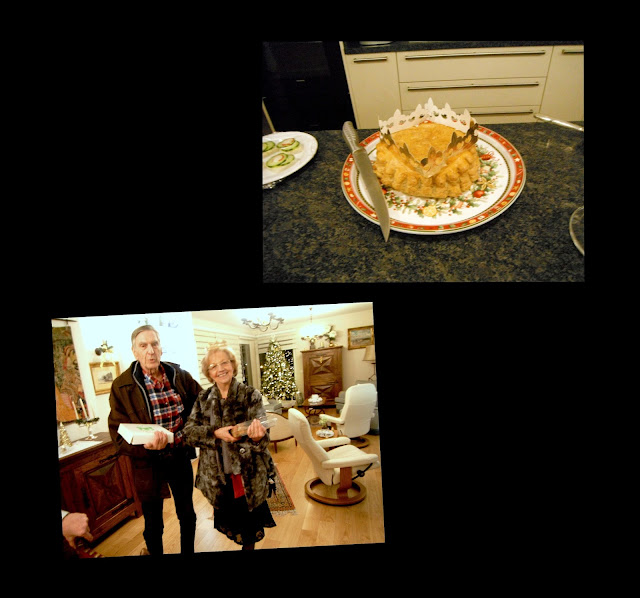 Normally "La fête des rois" (Three kings day) is on January 6, we celebrated one day before, everybody cuts a slice of a special cake containing a little statue or something else 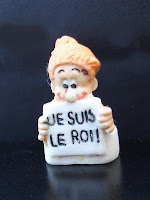 and the one who gets the charm becomes King or Queen. In our case it was Monique who became Queen ! It was a very nice afternoon.

Ilona and I hadn't seen each other since before Christmas so she invited me for a Three Kings cake
As she had eaten a piece for breakfast, she had gotten the little statue which was inside and was the Queen of the day. We had a lot to chat about our New Year celebrations and then her daughter and husband came to wish her a happy new Year. It was funny because Ilona always speaks French, but with her children Flemish (Dutch). I understand Dutch very well but have difficulties to speak, so we had a mixture of French/Flemish, because the daughter also speaks French but the husband less. It was easy, they spoke Flemish I answered in French and vice versa.

They had just come back from one week in Moscow and had celebrated the New Year there. It seems that it is very beautiful town and doesn't look poor at all. The metro is beautiful they said and they preferred Moscow to St. Petersburg. It was very interesting to listen to what they told.

Then I returned home and another day is finished. Tomorrow whole Belgium will go back to normal as the school holidays have ended.
Posted by Gattina at 07:00 4 comments: