THERE IS NO AGE TO BE A FAN

A few years ago the Italian singer Eros Ramzotti gave a concert in Brussels. A friend of mine Jacky in the respectful age of nearly 80 but very fit, was a big fan of Eros Ramazzotti. She got so excited and asked me if I wanted to come with her. 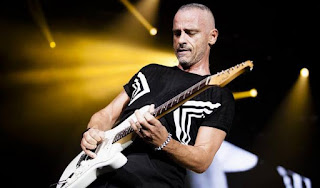 Since I also like the songs of Eros very much, I agreed immediately of course. We just got two tickets, the concert was sold out since a long time.

Eros Ramazzotti's fans were of all ages, young and old.

When he started to sing, a few fans screamed in the front rows, but Jackie jumped up as if a wasp had stung her in the bottom  and shouted "Eros, Eros, Eros .... Throwing her arms in the air and jumping up and down !  I thought it was pretty funny, seeing an old lady behaving like a teenager, but for me it was hard to understand why such a calm and reasonable person suddenly turned into a hysterical fan. I had never been a fan in my whole life, even if I really liked certain actors or singers very much.

It lasted the whole concert and during the break she raved about her Ramazzotti. When the concert was over and he really didn't come back on stage anymore, we could finally leave.

My car was parked on a small lot that I happened to see when we arrived. When we came back there was a big camping car next to my car, with two enormous men standing outside smoking. The door of the camping car was open.

With a loud screem "that's his camping car" she ran as fast as she could to the entrance and wanted to climb up the few stairs. Of course the body guards stopped her and explained in English that she wasn't allowed to go inside. But Jacky didn't hear or understand anything managed to get herself free and entered the room, followed by the desperate bodyguards who tried to hold her back. Nobody would have thought that there was so much strength in an old lady, before the bodyguards pulled her gently back. She was so happy to have seen Eros live and where he slept when he was on tour.

While I pushed her towards my car I turned around and excused her for her behaviour, but the two men only smiled and waved us away. I am pretty sure they laughed their head off once we were gone.

On the way back home, I learned the whole life of Eros and drove a very happy Jacky home ! It had been an exciting evening !!

Here is a song from him which made him famous I guess.

Our moving date comes closer and closer and I spend my days between paper work, blogging, and to relax visit a friend.

Now that we are more free and the lockdown rules have changed a bit, we started Scrabbeling again ! What a pleasure. Only one was missing she was not feeling well.

A miracle happened I was second ! And I had never played since March 13 when the lockdown started !

Poor Mr. G is a nervous wreck and no help at all, on the contrary. He doesn't like when his routine is disturbed like a lot of seniors (to be polite)

Before we get the keys to the apartment, an inventory is made to see that nothing is broken. For this I needed household insurance and a special account with the amount of two months' rent as a guarantee for any damage that we could cause !

In normal times that wouldn't be a problem, but in lockdown times everything becomes a problem.

No way to see people in person everything has to be done by phone and confirmed by email. Each time you call a number in my case it was our bank,  you get a robot on the phone who asks you to push button nr 1 for French, n°2 for Flemish, n°3  investments etc etc bla bla. After having listened to the whole menu, what I was asking for wasn't mentioned. I called our agency and asked for an appointment. Without appointment they just do nothing. Now the problem was that I should do it per phone. I told the lady that I had done that already and what I needed was not listed. 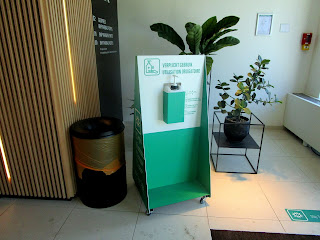 Everywhere you go you have to wash your hands !! Even at the bank !

As I had to pick up a new bank card, I thought I will ask her in person. She was very reluctant, because the appointment was only for the bank card,  so I changed my tactics and said that I didn't understand anything, that I was 77 and didn't hear well and had no idea about computers. Suddenly everything was possible ! (Seniors are supposed to have a lot of money to invest in the bank in Belgium) she did what I asked for in no time and of course proposed me if ever I had money to invest, that they were there !!

My cleaning lady is incredible ! I had asked her to empty the furniture of an entire room, wardrobe, shelf, desk and a dresser and put the content in suitcases. One hour later she called me to have a look and to my surprise it was all done ! Wonderful, at this speed it will be quickly done.

To downwind a bit we had our lockdown meeting at Nicole's and for once it was raining since a long time. We spent a nice afternoon.

THE AFTERMATH OF THE LOCKDOWN

On March 12th I went for the last time for lunch with my painting class girls after the course.

The next day it was Friday the 13th and suddenly everything was closed. All restaurants, bars, cafés, etc  except food shops.

We weren't allowed out either, we were locked up in our houses and apartments. Nobody was in the streets and nearly no car.

The first three weeks I thought it was funny, everything was closed so I didn't have to make any plans. Every two days I met two friends, although this was actually forbidden, but both had large apartments and a house so that there was more than enough space to respect the distance rule of 1.50 m and we were always the same girls.

Thank God we did it otherwise we would probably have gone crazy. After a while I felt tired even though I didn't actually do anything, I was tired of doing nothing and without any energy and I wondered is it just me ?

I asked around me and also in my blog and noticed  that many people had the same symptoms.

And now that we are almost free there is another strange behaviour with people. Now a lot of them just don't dare to go out yet. There were only few people when the boutiques and all other shops opened.

I am also reluctant to do shopping and this is also not just me ! The signs on the floor, the masks we have to wear, the long lines outside the shops all this looks so unreal I just have the feeling to be in a game.

I should buy the new TV but when I see the people lining up outside the shops, I just return home. I don't want to order it on Internet because I need the installation which is included in the price. So I wait for the day that only two people are waiting outside ! 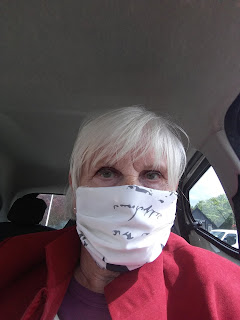 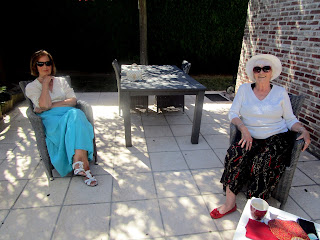 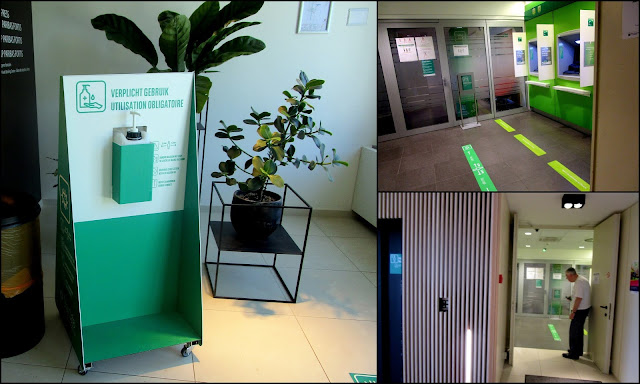 Waiting at the bank : Disinfection, lines, closed doors .... only open with an appointment !

Linking to Linda G. Hills One liner Wednesday  Is it just me ? 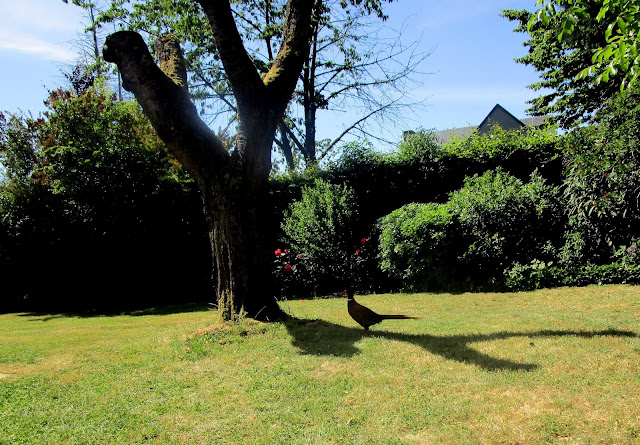 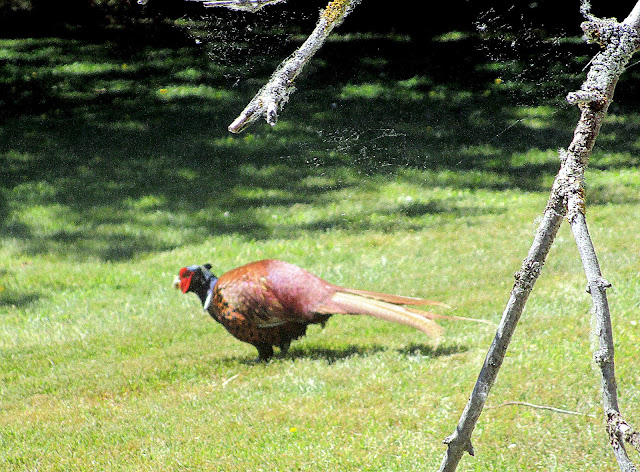 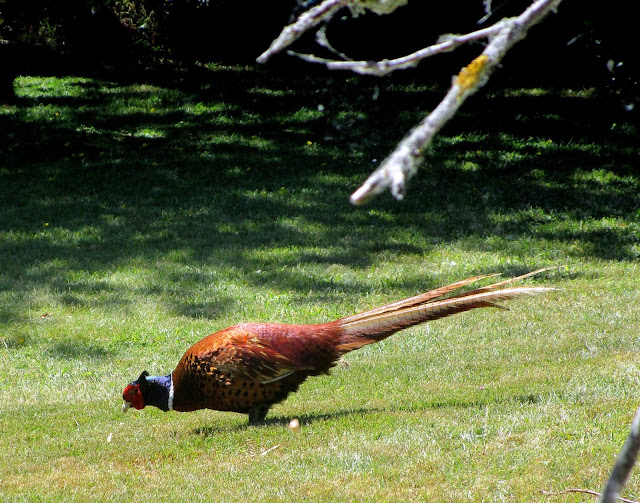 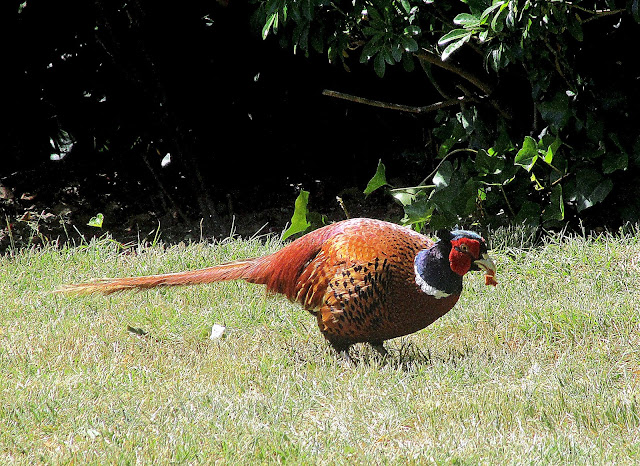 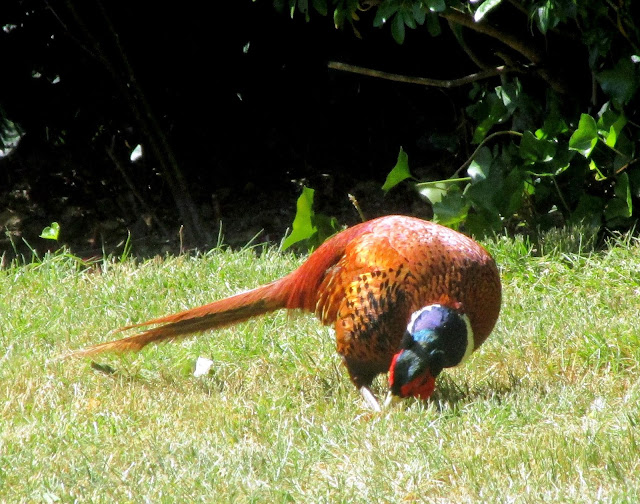 Sitting in the garden (yard) of a friend and drinking a glass, we suddenly had the visit of a pheasant who wasn't shy at all and was pleased to get some pieces of our cake !

more participants here,
and Image-in-ing
Posted by Gattina at 07:00 11 comments:

In 1722, the Dutch closed off the entrance to the harbour of Antwerp and Ostend rose to prominence. In 1838, a railway connection with Brussels was constructed and Ostend became a transit point to England a few years later when the first ferry sailed to Dover. Ostend grew in stature during the reigns of the Belgian Kings Leopold I and Leopold II, who both liked to spend their vacations in the city. Important monuments and villas were built for the Royal Family and the rest of aristocratic Belgium soon followed, leading to Ostend being called "The Queen of the Belgian sea-side resorts".

Today it's still very easy to go to Ostend from Brussels. It has become a city with a lot of very modern buildings in the city center and along the beach. All old houses very demolished and replaced by modern high buildings. The seaside has become real ugly, but of course there is much more space for tourists.

Lots of wealthy retired Belgians bought or rented an apartment along the coast, it's only 100 km from Brussels. You have the sea and also a city at the same time. 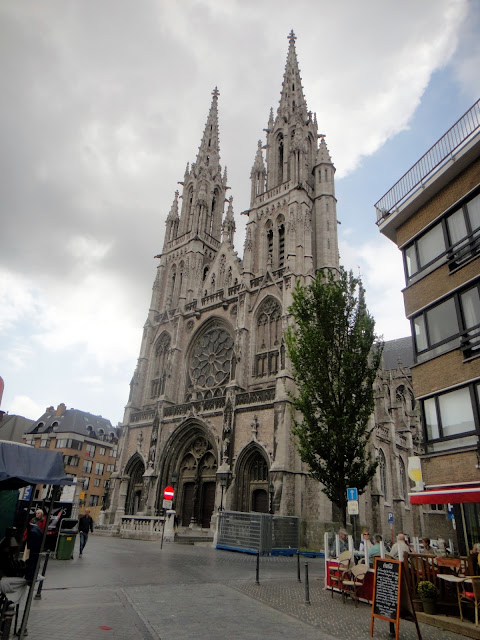 The church of Ostend 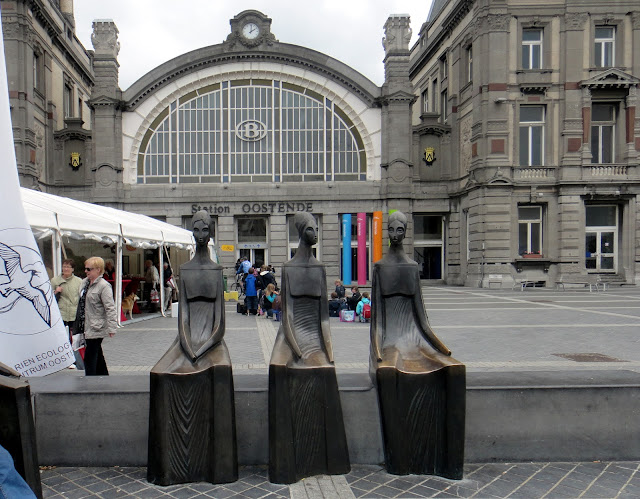 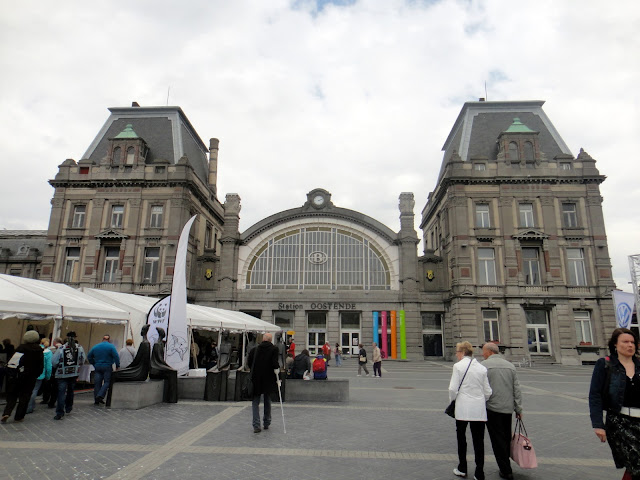 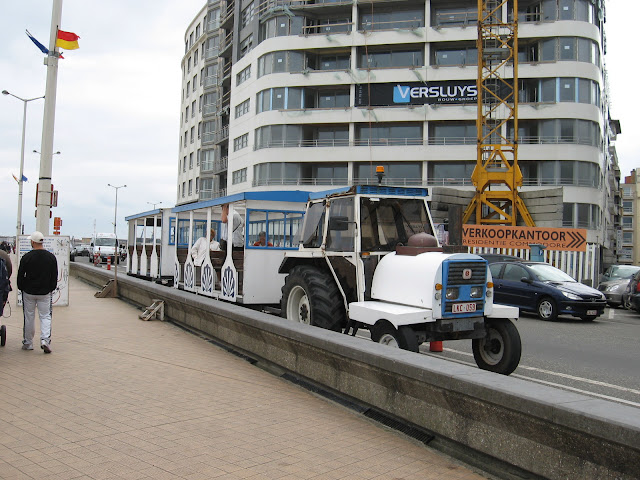 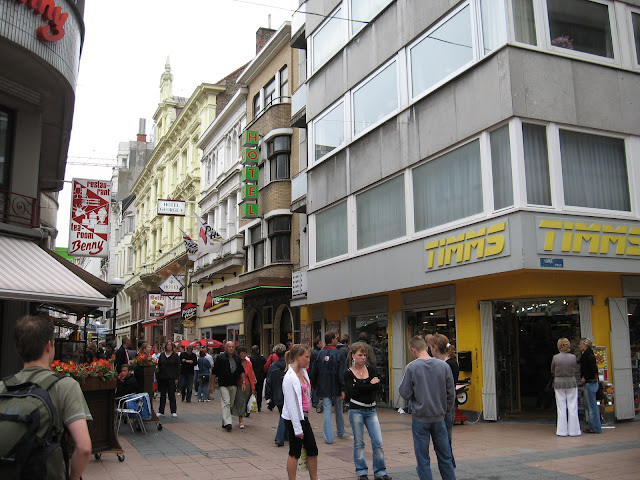 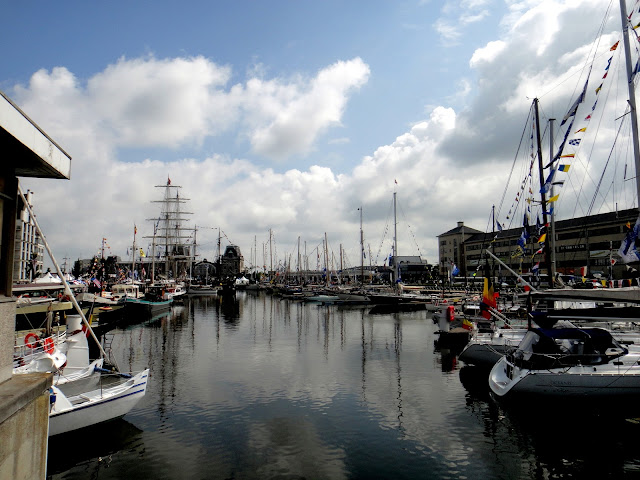 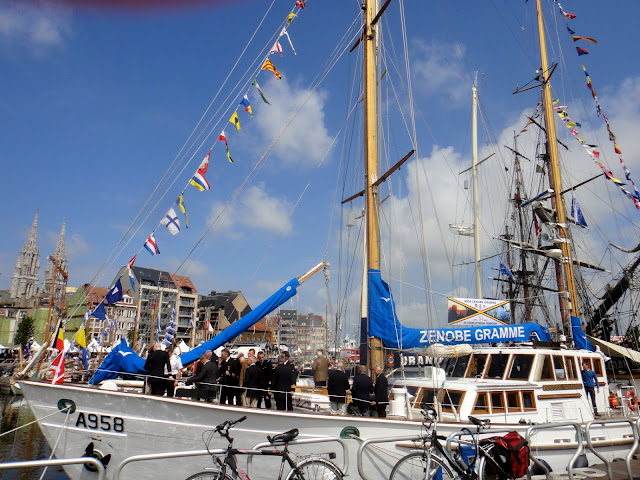 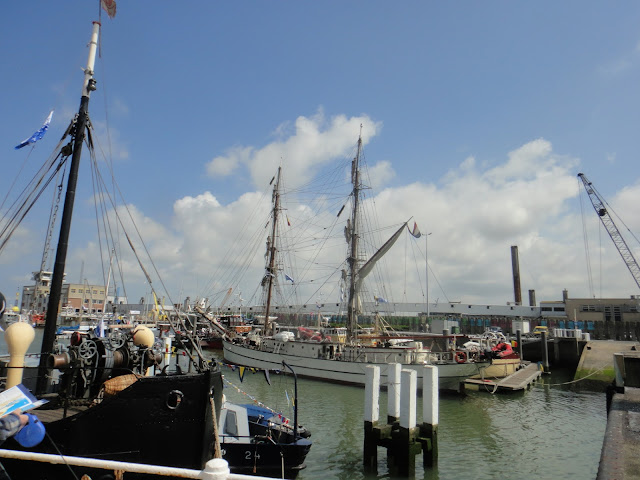 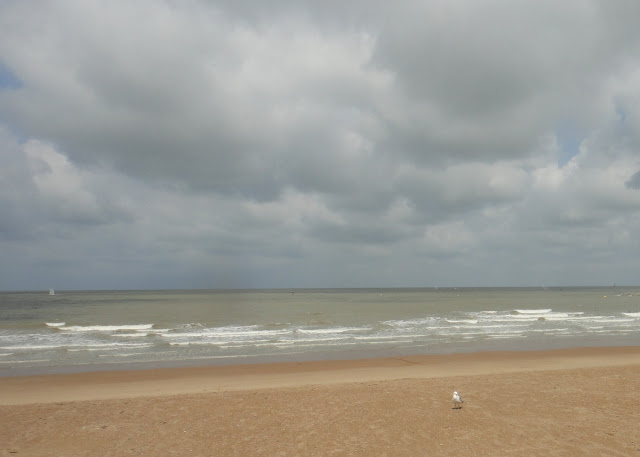 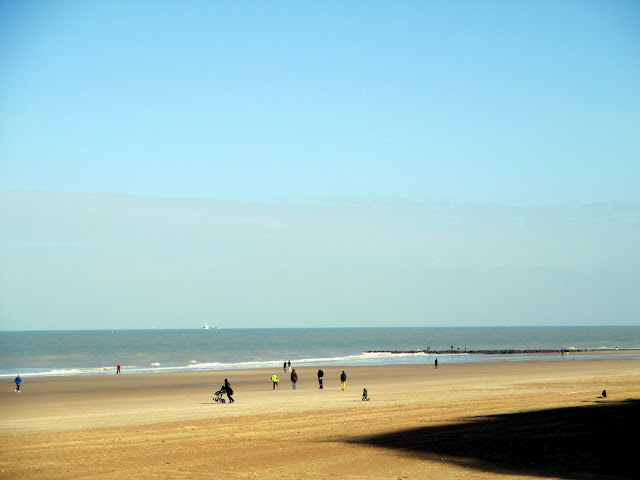 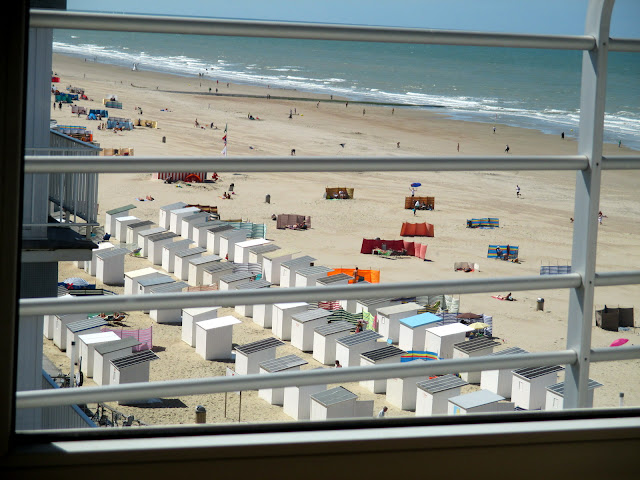 This is the view of my friend's flat at Ostend.


More about Ostend here in my Countries & Cities Blog 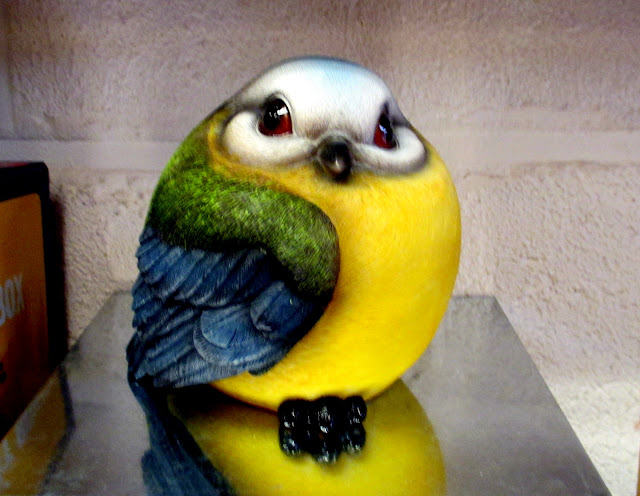 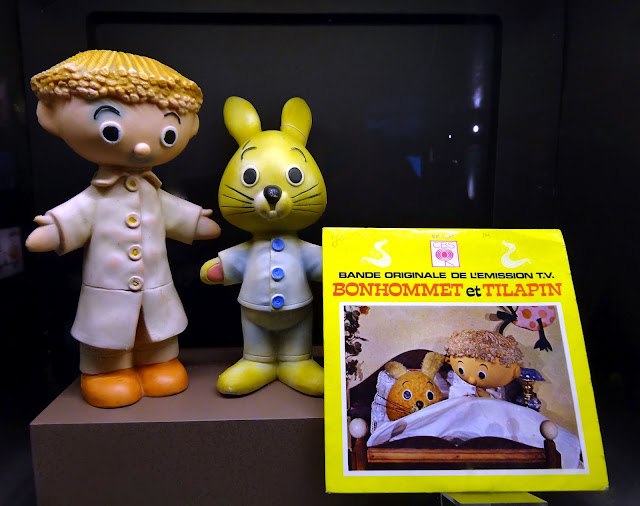 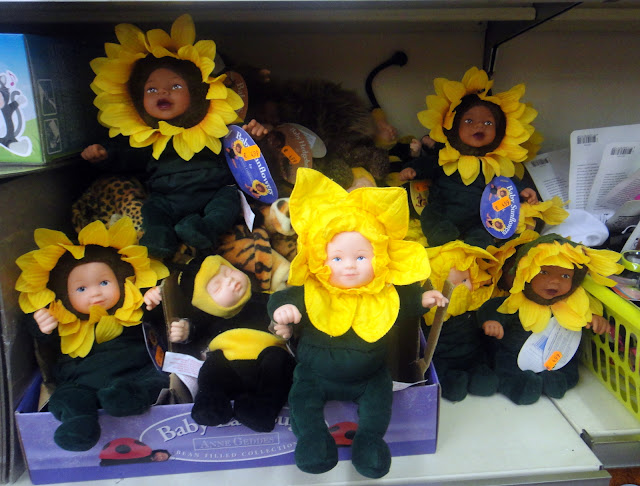 Our TV is quite old and before moving I wanted to buy a new one. After lunch I drove to the first shop ! When I saw the line of at least 10 people with their masks standing on a yellow line, my heart sank and I decided not to stand there in the sun and wait until it was my turn. I went further to a big store and there it was the same.

As Nicole lives just around the corner I stopped and asked her if she wanted to come with me, she agreed because she needed a new vacuum cleaner. We decided to first drink a cup of coffee and sit a bit on her terrace in the sunshine. We thought that maybe later there would be less people. Suddenly I realized that it was Saturday ! With this lockdown I never know what day we are. Shopping on a Saturday was suicide and as we were so nicely installed we became both too lazy to get up, take the car and probably line up at the shop.

I will go on Tuesday, as Monday is Whit Monday and everything closed !

On Sunday we were invited by Mr. G's friend with whom he plays Whist, together with my lockdown friends ! It was beautiful summer weather and we could all sit in the required distance. 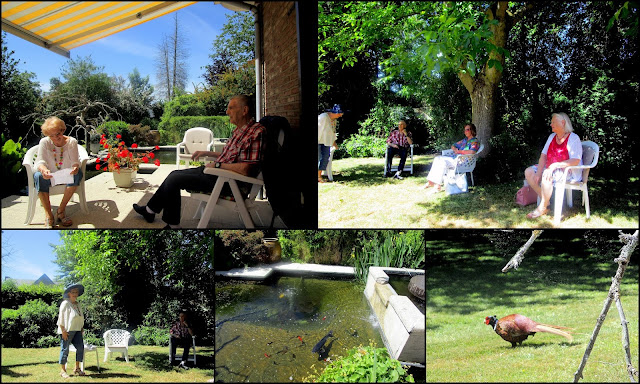 We chatted together and they had a glass of white wine, while I drank my alcohol free beer. The fishes in the pond were waiting for food and suddenly we had a new guest who kept us company the whole afternoon and wasn't shy at all ! A pheasant !! He had beautiful colors the back golden, a white collar and a shiny green head !

It was a nice afternoon despite the fact that I was very tired from all the papers I had to do for the moving and the whole organization. Mr. G unfortunately is no help at all,  he is afraid of the moving and is rather disturbing me than helping. For the first time I felt really alone and down and was rather happy when the afternoon was over. Maybe we were too many. When I meet with my "lockdown" girls they rather cheer me up.
Posted by Gattina at 07:00 9 comments: