It seems to me that I always start my weekly report with the weather ! It had cooled down and it's difficult to dress, because it's very cool in the mornings and sometimes gets hot in the afternoon, so it happened that I changed 3 times per day ! And I am not a princess !

In our painting class we had since the last 5 years 3 classmates who died of cancer at a rather young age just around 60, and yesterday I was informed that our beloved teacher had passed away too, after a long battle against cancer. I am so upset ! Millions are spent to discover the moon and there is not enough money for researches to be able to heal a cancer ! 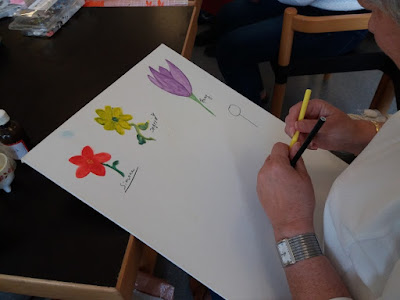 On Saturday is the incineration and instead of a wreath one of us had the great idea to let us paint on a canvas a little flower and sign it. This "painting" we will put on the coffin.

My friend Chris had got it too, and so sudden. I finally could visit her at home and was a little worried to see her, because she had told me that she had lost 20 kgs and she wasn't a big woman. But I was so happy to see her in such a good shape ! She really looked good of course more than slim, like some models today, I told her she could now work for Dior and we laughed. She still has some treatments because there is one metastases left. But she has no pain and apart from feeling quickly tired she feels good. All good news and I was really happy for her. I stayed for 1 1/2 h and then left, because I saw that she was tired. But we had a lot of laughter together and that was good for both of us.

My Russian Visa adventure continues. Finally we had all papers and sat already in the car. I typed the address in my GPS and this stupid thing didn't find it. My friend tried with hers same thing. I checked again the address and found two post codes. I tried the other one and it worked !! Why having two post codes ?? To be sure about the office hours I called before starting our route, and was told that the office is open from 9 to 6 without interruption from Monday till Friday. Just before ending the call the girl said in a very strong Russian accent that today the office is closed !!

I wanted to check on my computer and what did I see, it was the Russian National Day and everything was closed ! Can only happen to me. We will give it another try today !!

As it was early I went with my friend to the Indian shop she had never seen. 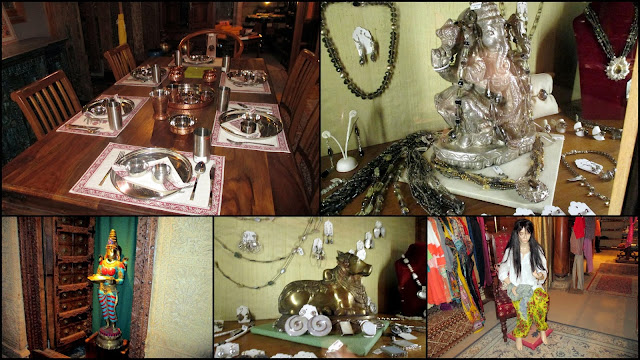 She was delighted of what she saw and bought a few little things to offer to friends.

After the shop we were hungry and had the first mussels of this year ! The national Belgian dish : Mussels prepared in different ways, natural, with white wine or à la provençale !  We took natural.

Two days later we tried the Russian Visa center again. It went smooth until very close to the indicated address. Poor Mrs. GPS had to find ways and ways to get us there because there were street works everywhere and we turned around in circles. Finally we found it but no parking of course and we had to walk for 10 min. The office was on the 5th floor and when we arrived there were just one person at a glass protected counter. Nevertheless we had to take a ticket like in a butchery on a Saturday morning. There were two counters with one French speaking elderly lady with an awful accent which I could hardly understand and the other counter was occupied with a young English speaking lady. Fortunately we had all our documents in English and ready. So far so good. But then she said that we had no statement of our bank that we dispose of enough money. We didn't know that and it wasn't mentioned in the list. I told her and she answered that's because we are retired ! She was very friendly and printed out all bank address nearby. Unfortunately mine was far away. But the girl found a solution, she said my friend could add me on her statement and with a declaration that she will take care of all crimes and debts I could cause.

Off we went to the bank which wasn't nearby and  again full of street works We were in a hurry because the Visa Office closed by 2 pm although it was written that they are open until 5 am !
While I was sitting in the car in front of a garage entrance, there was no parking space, my friend went in the bank and asked for the requested attestation. Then we returned to the Visa center ! I stayed again in the car and Bunny gave her paper. Suddenly she came back with a letter I had to sign, apparently my passport was damaged and I had to declare that it hadn't been damaged by the Russians !

Of course when your passport is 9 years old and has 9 Egyptian Visa stamps in it, it doesn't look very new ! I signed and she returned again. And then came the bill ! We had to pay 126 € (146 $) per Visa ! I thought with the Football (soccer) Worldcup they will become rich  ! There is around a million  of fans going to Russia right now ! 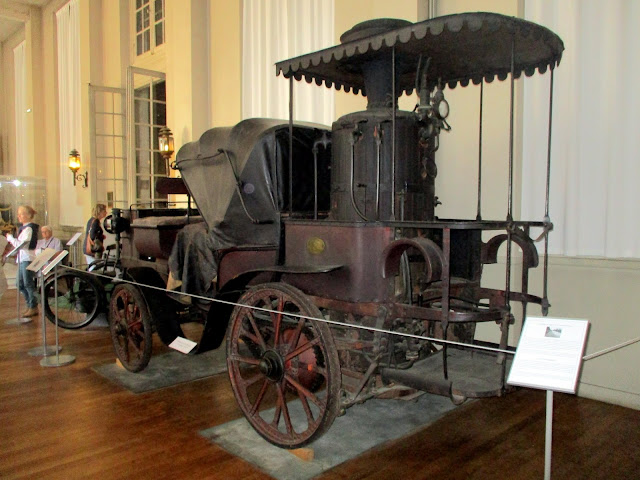 1. What happens to the mail at your house?

Nothing, we don't get any mail anymore besides invoices, which are paid and filed. Less and less paper fortunately. The snails who squatted our mailbox and ate one invoice, were killed and now there is none anymore. Nothing to eat !

2. Something you always splurge on? Any guilt associated with the splurge?

3. There are many, but what are two important questions you think every bride and groom should ask/answer before they plan their walk down the aisle?

Living together at least for a year and then ask questions if there are any. The walk down the aisle maybe romantic but can be tricky too.

4. What's the best advice your father ever gave you? 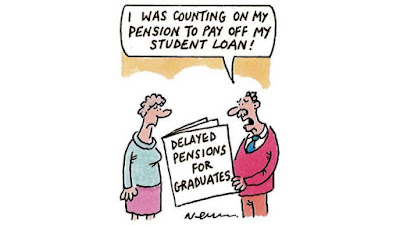 Never count on the government to pay you a decent pension ! and he was right !! At least for Belgium.

5. Your favorite movie where a father features heavily in the storyline? 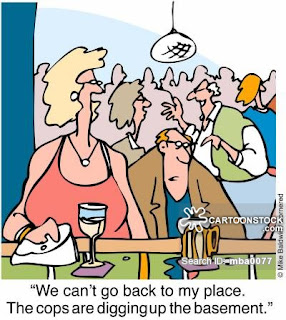 Not my kind of movie unless the father is a serial killer !  I like psychological crime stories.

I have to go to the Russian Visa center this morning and I rake my brain if I have all papers needed.
Amongst a filled in form, and two pictures (where I look like a criminal)  they request full health insurance certificate, probably because they don't want to pay for tourists.

..... After this delicious lunch, the bus took us  to the Clairiere de l'Armistice a war memorial commemorating  the armistice with the signature of the Germans that ended World War I in 1918. During World War II, Adolf Hitler deliberately chose the same location to sign the Second Armistice at Compiègne after Germany won the Battle of France.

You can visit four main attractions: the Glade of the Armistice with a statue of Ferdinand Foch, the Alsace-Lorraine Memorial, the Clearing of the Armistice, also called Rethondes Clearing, and a replica of a train car.


This year is the 100th anniversary of the end of the First World War, which finally came with the signing of the Armistice in a railway carriage in the middle of a wood 80 kilometres north east of Paris on 11th November 1918.....

I don't know why, but this year it seems to me that time flies by so quickly ! Now we are already beginning June ! Soon the school Summer Holidays will start and we probably will have a lot of tourists.

Meanwhile we had our monthly Facebook "Vivre à Waterloo" meeting and as usual it was very nice. 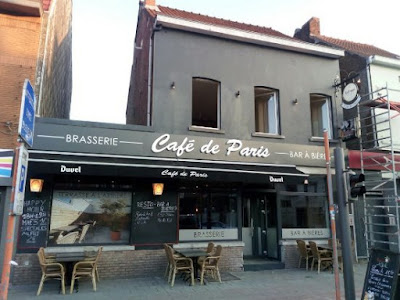 This time again the Café de Paris was chosen and I have to say they have real good food. 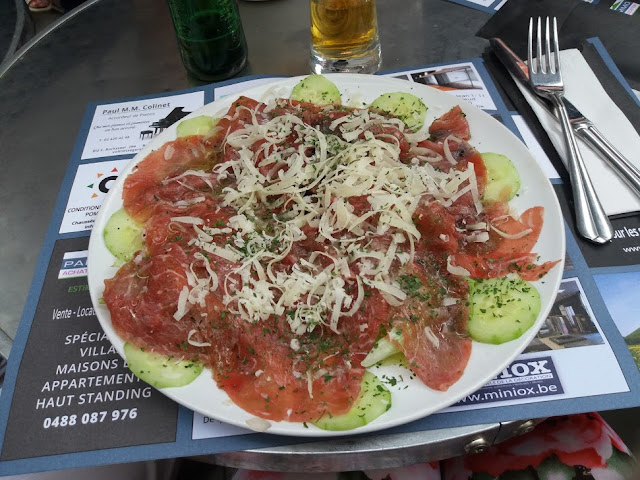 As it was quite warm we ordered a plate of Carpaccio which was excellent ! 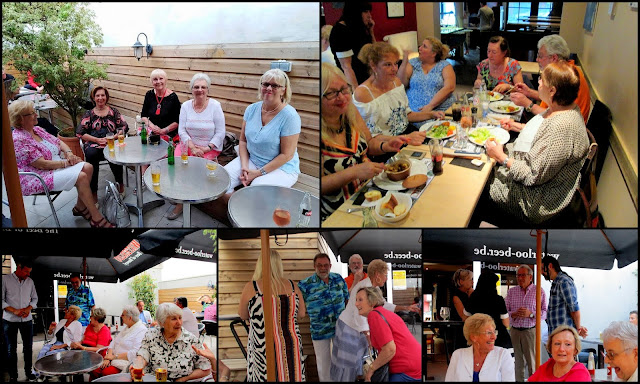 And here we are on the left Monique, Nicole, me and Bunny my little group of best friends. There were about 30 people maybe more, and we chatted and laughed the whole evening. Around 9 - 10 pm we all left.

That was about the only thing I did on Saturday, besides household stuff.

On Sunday I went to our market nearby and bought some tomatoes, potatoes and pieces of chicken, I want to make a salad for tonight.

I spent the whole afternoon outside, watching birds and cats and also a movie, it was quiet hot and there were dark clouds in the sky announcing again a thunderstorm. 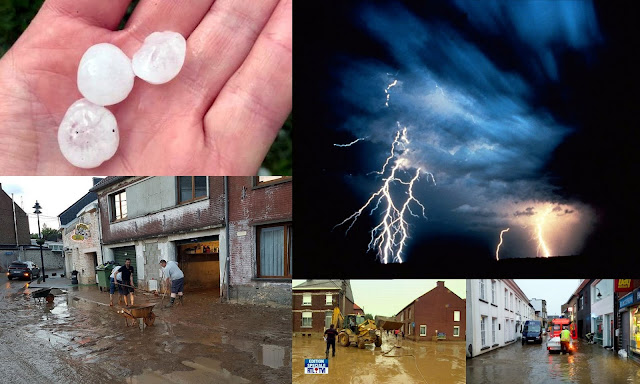 It had never happened that since a couple of weeks there were thunderstorms in different parts of Belgium nearly every day. Above you see hail in a size of a marble, spectacular lightening, flooded streets and streets full of mud. Some people had just cleaned their house when the next storm arrived.
! We were really very lucky, besides some hail we had nothing in our part of Waterloo, but on the other end streets were flooded too !

Really unhappy are the insurance companies ! Now they have to pay ! Responsible of the insurance company
Posted by Gattina at 07:00 8 comments: