1. Days are flying by when there is nothing special happening as your daily routine. It's Monday and then suddenly Friday and you wonder what you have done during the week !

2. As usual I hopped around in the swimming pool during Aqua Gym, taking care of my health and body.

3. I spent a lazy day on my day "off", day "off" means that Mr. G. is out of the house playing cards (Whist) in a group. I used this day by watching a movie, which is too romantic for him.

4. And then came the day which recompensed the days which seem to me like a pearl on a pearl necklace every day looking the same.

Nicole had invited us, Ilona and me, we wanted to talk about our forthcoming trip through Cornwall with an old train, still using a steam locomotive. But it didn't happen. When we arrived we found a very unnerved Nicole, telling us that she was completely out of her mind, which we stated with no problem. She tried to tell what happened and I understood she had found a corpse in front of her entrance door, fortunately I had misunderstood, it only was an injured bird. She had taken it in and had put it in an open box on her terrace. She had been in the garden with a spade to dig out worms for this little thing, but despite all efforts it refused to eat. One sleepless night had passed and then we arrived ! 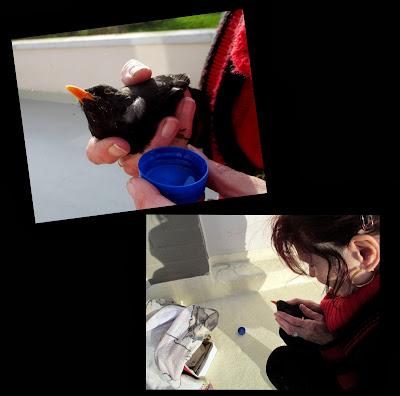 We followed her on the terrace, where the worms had dried meanwhile and Ilona tried to give the bird at least some water. The ungrateful thing bit her in her finger, so I concluded that he was not that injured, but it couldn't fly and always fell on its back. We had to do something. Kill it ? No, nobody could do that, spending another night on Nicole's terrace, impossible, then she would have landed in a madhouse. She was so concerned about the little birdie. We thought it was a raven baby.

Finally I had the good idea and googled for a shelter for wild birds or animals. I found one not very far from Waterloo. But Nicole in her nervous state had written the address with only one wrong letter, and of course Madame GPS couldn't find it. We arrived in the little village, but still nothing on the GPS. I asked Nicole to call the shelter again, which she did and my GPS  found the right street. Only there wasn't any  animal hospital but a beautiful park with fitness equipment, swimming pool etc in the middle of the woods and of course closed in this season.

I asked a man who seemed to work in the woods for the hospital and he told me that it is a few meters further on the same street. I called Nicole and Ilona but they had ran off and were out of view and too far away to hear me so I had to ran after them. Meanwhile my patience was coming to an end, I had driven around and we still weren't there after more then an hour ! We were in a hurry because the shelter should close at 5 pm and it was already 5 ! I hurried them back to the car and asked to call again. Apparently we were very close, but couldn't find the entrance. Now I had enough, I asked Nicole to dial the number again and give me the mobile so that the woman on the phone could direct me while I was driving. Nicole's mobile was dead, she had forgotten to charge the battery. I gave her mine, she dialed the number gave me the phone and I told the woman where we were and followed her instructions. She said that we would see a sign with a blue owl. 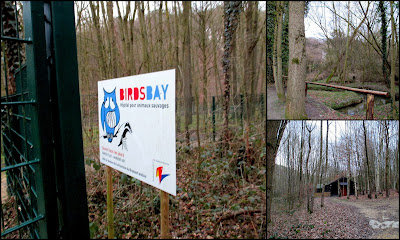 and finally I saw it, well hidden behind trees and a fence and no street of course. You had to walk to the animal hospital. I parked the car in front of the fence and we three plus the bird, still sitting in his box ran down to the entrance. 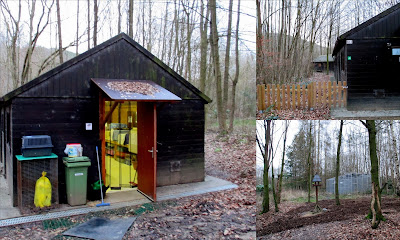 The bird had stronger nerves as we had, because it still was very much alive. And I had thought it would die of a heart attack in the car. Instead it had bitten Nicole again who pushed loud screams which nearly directed me into the next tree while I was driving. 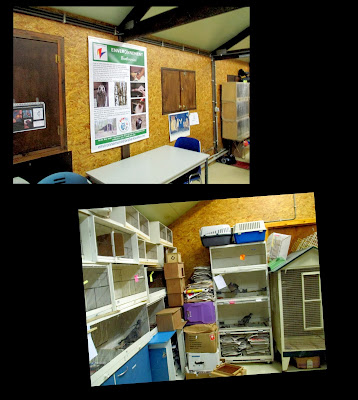 A very friendly lady greeted us three vintage ladies a little out of breath, looked at the bird and told us that it wasn't a  raven baby but "only" a blackbird ! All three of us as cat lovers have no clue about ornithology ! 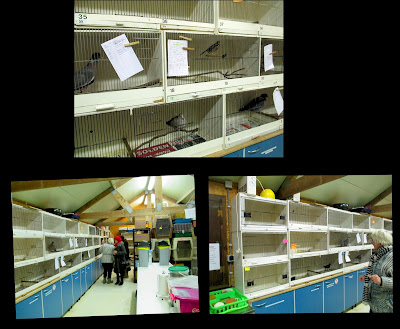 The lady showed us her patients mostly injured birds, 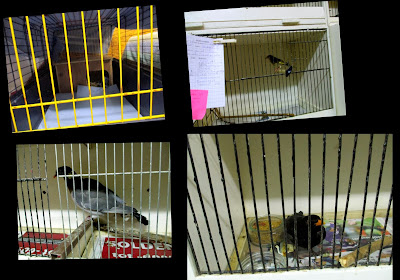 but also wounded hedgehogs. I tried to take a picture of one, but it was hidden in a box behind the yellow grids. We said good bye to our little problem child, went back to the car and returned to Nicole's. This time without any problem and it only took 20 min instead of 1 1/2 h !

Now relieved from her troubles, Nicole served us a well earned drink and then we sat there looking at each other and bursted out into laughter. We saw us like in the "hidden camera", the three vintage ladies running around with a bird in a box and one with a camera shooting around. Besides all the fights and rather animated discussions we had in the car about streets and directions !

5. In my painting course, I just did nothing, I had no inspiration at all and sat in front of my painting which looked like a dart game, without the arrows.

More participants here at A rural Journal.
Posted by Gattina at 06:30 22 comments:

KILOMETERS, KILOGRAMS, NOT SO EASY !

To write this post I wanted to know since when kilmeters (km) and kilograms (kg) were used and where the definition came from ! I learned a lot ! I tell you Blogging enlarges your general knowledge ! First I learned that both are "SI"s and is an abbreviation of " International System of Units". Kilograms and Kilometers were used already from 1791 onwards and today the whole world uses it except the USA. In the UK  miles and pounds is in a form of transition, the elderly people still use miles, while the young generation learns km and kgs at school.

My son of course learned it too. Unfortunately he was the victim of a school teaching reform, which made everything more complicated. One day I realized that he didn't know what a km or a kg meant except the two letters k and m and k and g. To him one kg rice and one kg sugar were two different things,  one was sugar and one was rice that the weight was the same was another thing. The school didn't use a visual teaching but only an "abstract" one.

I was horrified and angry ! I complained to the director but was told that yes before they showed children sugar and rice and weighed them on a balance so that they could see that a kg was the same weight for sugar and rice.

What did we do ? I took rice, sugar, flour and whatever I could find in my storage, and let him put it on a balance so that he realized that all of the products showed 1 kg !

I probably wasn't the only parent who complained because the teaching reform was reformed again and today the children  have a visual teaching again ! 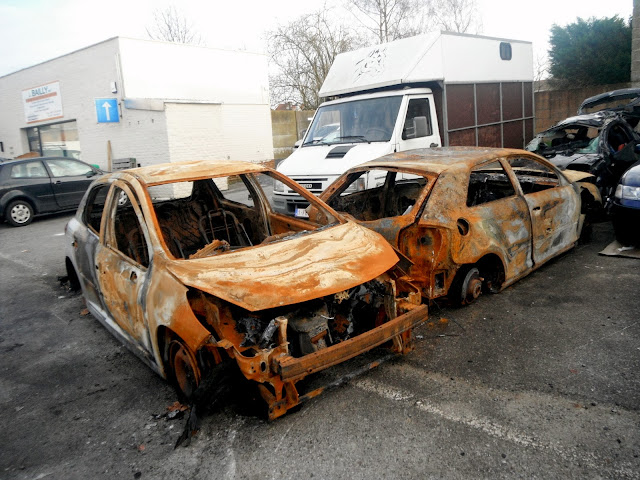 MY WEEKEND OF JANUARY 25

Photo hunting becomes a real hunting, the only difference is that you don't wait for animals to kill, but for the sun showing up to have some decent light, at least for half a day. Which happened this weekend. 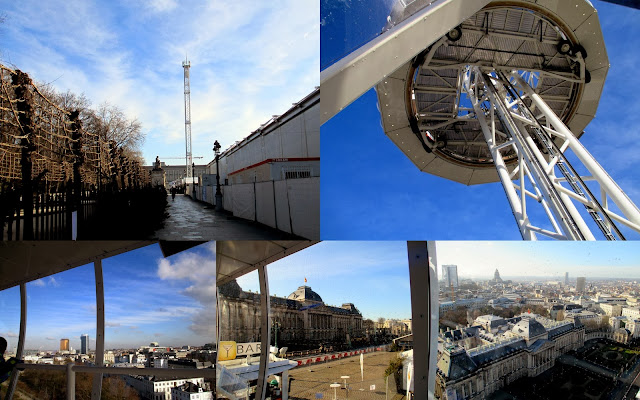 When I saw the sunny weather in the morning, I jumped in my clothes, then in my car, and drove to Brussels, got stuck in the tunnel leading to the city center for 45 min, blessed my car which drove in electric mode, and didn't consume any petrol, found a parking space which was a real miracle and went off to the see the Skyliner !

It is a steel tower, 85 meters (279 ft) high, which gives you a full panorama of Brussels. The glass cabin with a capacity of up to 60 persons, turns very slowly around its axis. It was beautiful and I really enjoyed it. For the first time I saw the Royal Palace from above ! 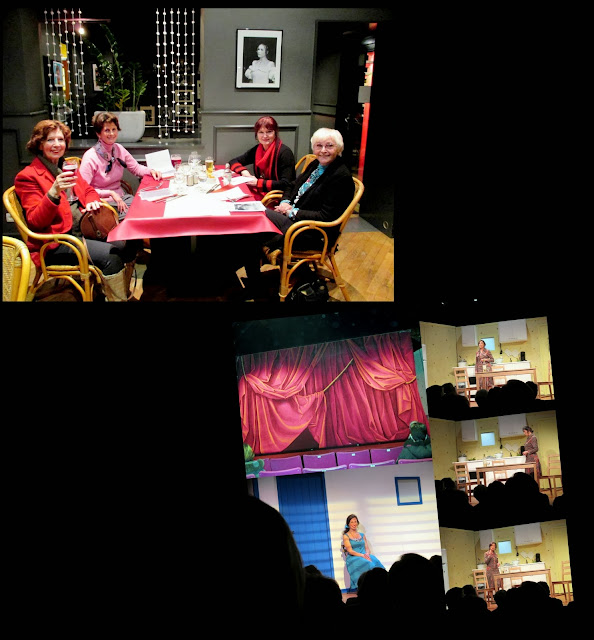 On Saturday evening we had our monthly theater play and as usual our supper before in the the Theater's restaurant. We had a lot of fun, especially with the play ! There was only one actress playing a housewife who had sacrificed her whole life to husband and children and then decided to follow the invitation of a freshly divorced friend to spend 2 weeks in Greece. It was hilarious and so true ! She always spoke to the wall in her kitchen, which she called "the wall" as if it was a person and while she cooked, she emptied a whole bottle of wine ! 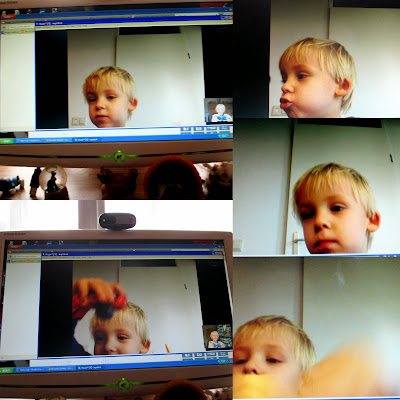 On Sunday morning we got a Skype call from Toby, of course with the help of his Dad. He was in a very good mood and showed us some of his toys and spoke like a waterfall. I probably repeat myself, but it is a great invention, even if you live far away you can follow the development of your grandchild.

Three weeks were over and I took the bus to the Midi Market in Brussels. At least it wasn't raining. I bought fruits and then waited for my cigarette supplier in the usual café. Suddenly 4 policemen came in and sat at the table besides me. Not really the ideal place to buy tax free cigarettes ! I went outside and looked for him and after a while he showed up. I told him that there are a lot of police around despite the not so nice weather, but he told me that it doesn't matter, he has no problems with them, he knows them well and they don't bother him at all. You should have seen my face, because he laughed ! I got my cigarettes and I gave him the money and we shook hands saying good bye.

I bought a nice warm shirt for Mr. G. and some Spiderman socks for Toby and then returned home.
At least I had taken some fresh air, because it rained again the whole afternoon. I checked the paws of my cats, they still have no flippers growing.