On our way from Vilnius to Warsow in Poland, we stopped in Trakai still in Lithuania. It was an absolutely lovely place, with its red-brick, fairy-tale castle, quaint wooden houses and pretty lakeside location. Fortunately we stopped there for a couple of hours and not only a short moment.

Trakai is a popular tourist destination and the administrative centre of the district municipality. The town covers 497.1 square kilometres (191.9 square miles) of area and, according to estimates, is inhabited by 5,357 people. A notable feature of Trakai is that the town was built and preserved by people of different nationalities. Historically, communities of Karaims, Tatars, Lithuanians, Russians, Jews and Poles lived here. 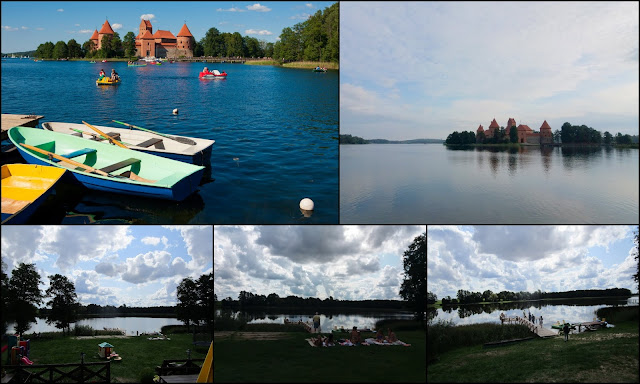 On Monday I felt exhausted from our Exhibition ! I hadn't thought that staying there from 11 am to 5 pm would be so tiring but it must have been the noise and the fact that I was often standing and explaining. Therefore I took it easy, and spend my day working on my post about Vilnius (Lithuania).
This took me nearly the whole day, because some of the photos I didn't remember where and what it was ! Fortunately I could google !

This time our Scrabble was at Nicole's. Since I had served scones with clotted cream, she had proposed each time to serve a speciality of a country. Unfortunately she had gotten a cake from her son who had bought it in France as a speciality ! It was called "Broyé du Patou"  (crushed Poitou)  a cake from the New Aquitaine region of France, made of sugar, flour, butter and eggs.The ground does not cut but breaks into uneven pieces, and normally you have to break it with your elbow or with a hammer.

I think the one who had invented this recipe must have an agreement with dentists, because that thing was as hard as a stone ! Mireille had to break it with a wooden spoon as we had no hammer and were worried about our elbows ! 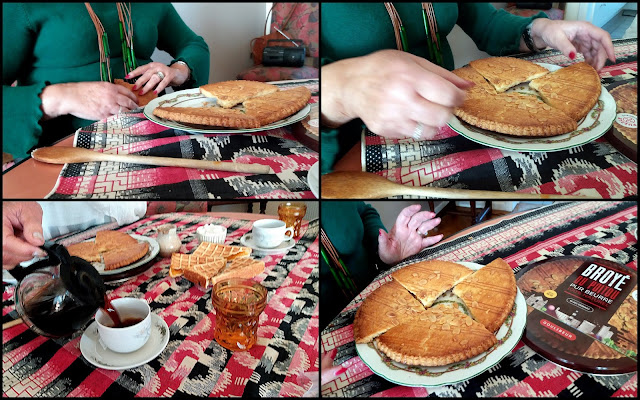 Strangely it broke into four quarters. We bravely ate each a piece, but had to dip it in our coffee, so hard it was. It tasted not too bad, but I would never try this French speciality again ! But we had a lot of fun in breaking the cake. I already saw the pieces stick at the walls.

Since we had learned Acrylic pouring in our painting class most of us are excited to try it out ! 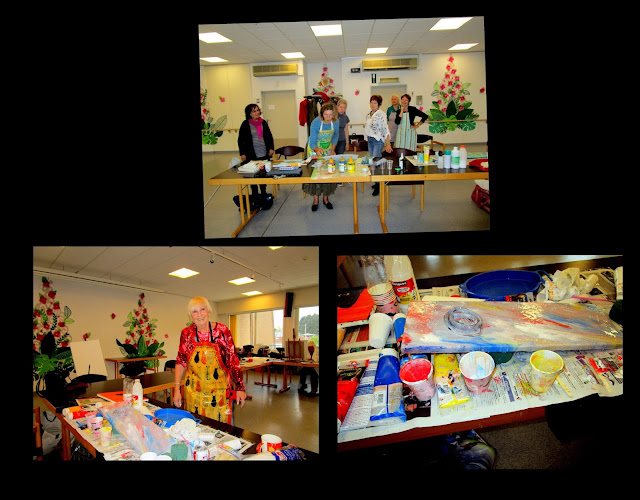 It's not a very clean job, and for once we wore aprons ! We have to mix the colors with glue and water, I tried beer, and then mix it well and pour it on the canvas. You never know the result, but it's just amazing ! The beer with the glue caused a special design in my color ! Next time we will try liquid soap !

The leaves slowly start to color, and it has become quite cold. We are not used to these temperatures anymore ! 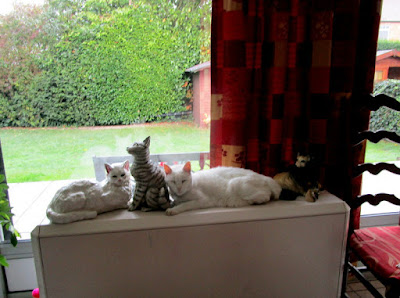 Arthur has found the right place, he sleeps on the radiator ! 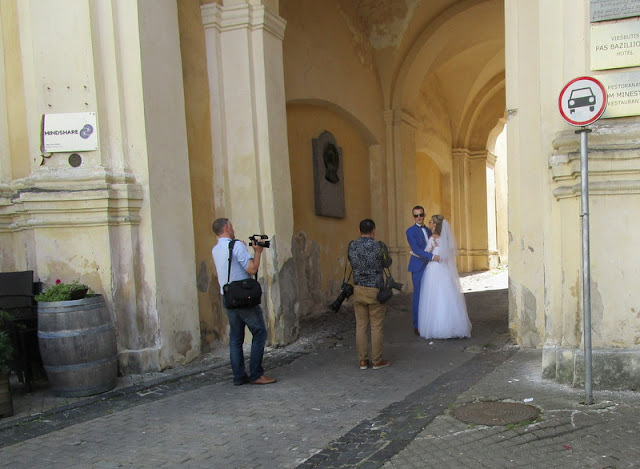 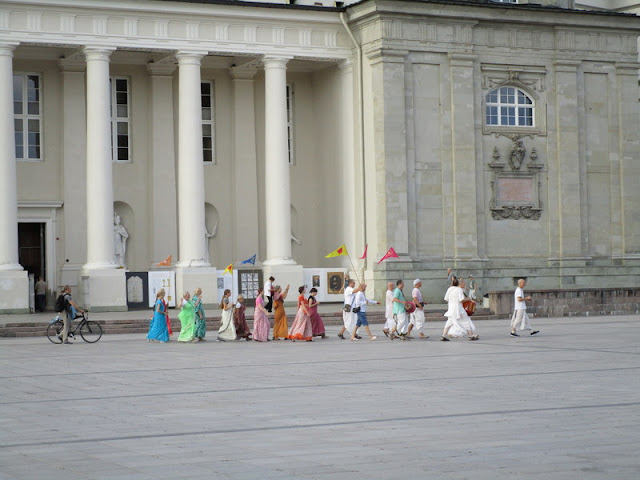 The first time I heard about Vilnius was because a French singer had murdered his girlfriend a French actor. So a part from this drama I knew almost nothing about this town.

When we arrived and drove through the city I immediately liked it ! It looked so homely and the buildings and houses were just beautiful.

Of course I wanted to know a bit more and learned that the city was founded in 1323 by a grand duke who attracted Jewish and German tradesmen and merchants with generous tax exemptions.

Saturday was the first day of our exhibition. A few of us arrived before the opening at 11 to dress the table, put the drinks in the fridge and adjust the last paintings.

Then it started we congratulated ourselves, the only stranger was Mr. G. who had suddenly showed up to check what we had done. 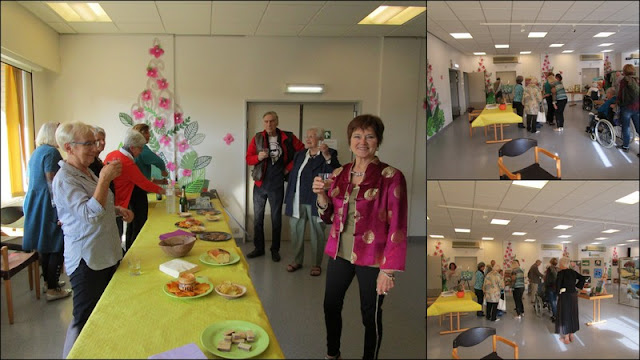 And then slowly the visitors arrived mostly in the afternoon. On Saturdays the shops are open so most of our visitors did their shopping first. 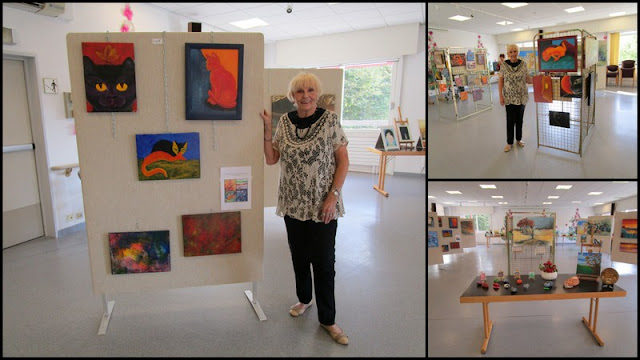 Here I am with my "master pieces ! I also had changed pebbles into cats by painting them. 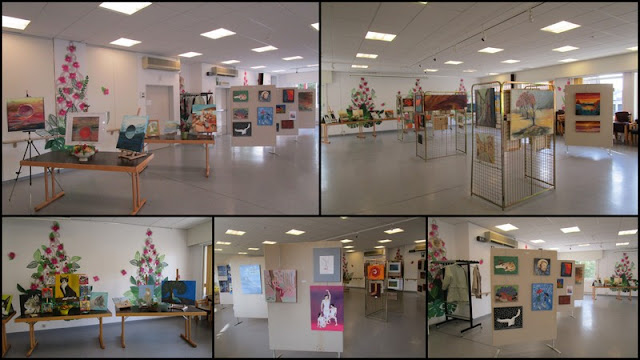 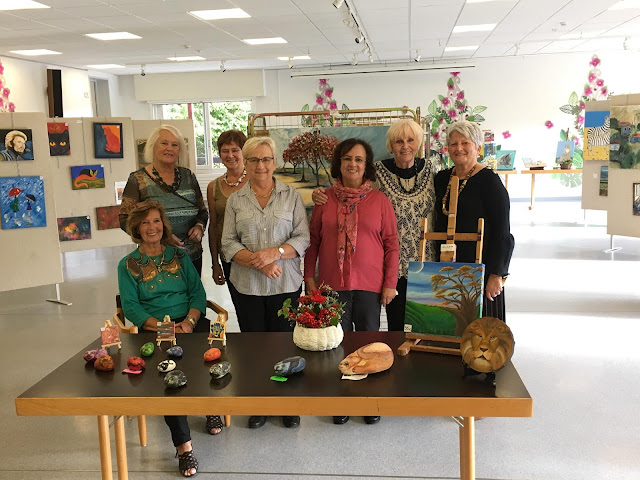 and the little helpers. We had quite a few visitors 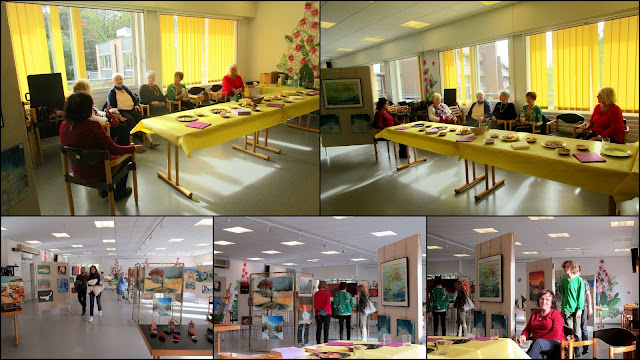 Except during lunch time we couldn't complain. I even sold 3 little cat pebbles, others sold paintings. We were all satisfied. Many people complimented us because the exhibition looked so nice.

Too soon it was over 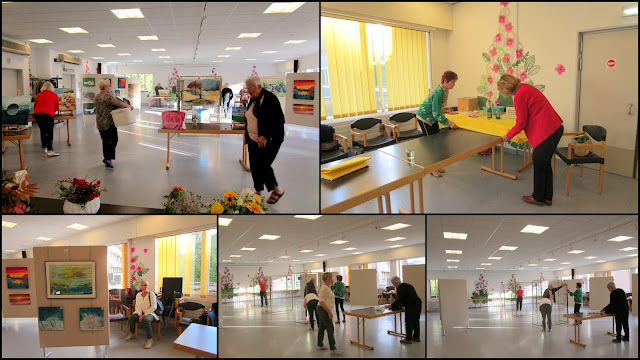 Now we had to dismantle everything and put it away.

I have to say that after these two days I am a "little" tired ! Fortunately tomorrow I have nothing special planned and can rest and recover !!