I had noticed that many American female bloggers are talking about Christian writing. I wonder what that means. Why should only Christians write and not Jews, Buddhists or atheists ? Not everything is nice in the Christian religion.

A writer shouldn't be influenced by a religion when he doesn't write about one. You can also be a good person and help poor people or people in need or do charity work without believing in a Christian God.

Writers should be open minded and not be limited in whatever they believe, as if all the others are all outsider when they are not Christians.

The reason which made me write this, is that I had decided to participate in a meme (why meme and not theme) which is called Five Minutes Friday "Encouraging and equipping Christian Writers",  and made me think why "Christian" ??

The suggested word this week is "Complete" ! Not very adequate to smuggle into my text which I had already started because I didn't really know how this meme would work. When I had looked, it was too early and nobody had written anything, as there is the time difference. When we get up in Europe, people in other countries in the world are still sleeping or are already half a day ahead. That's nice in Blogworld, there is no time limit to complete.

I like the idea to give us one word each week and you have to knit a story around it. That's a bit like a painter sitting in front of a white canvas and doesn't know what to paint, except maybe the title : "Landscape in the snow" as the canvas is usually white. This title would theoretically complete the painting which isn't really paint.

I am proud to have managed to put at least twice the word "complete" in my text, as it is not such an easy word it can have different meanings too. 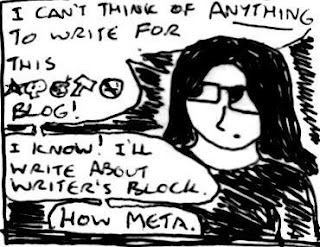 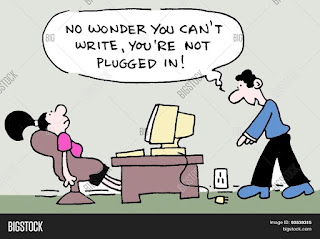 Linking to Five Minutes Friday
Posted by Gattina at 10:16 6 comments:


I had to bring my car for the yearly inspection before going through the technical control, which is obligatory when a car is over 4 years old. Then you have to go each year to have it checked if it is still OK. Of course all two years would be sufficient, but it brings money to the always empty piggy bank of the government.

Just opposite of the garage was a sport wear store and as I needed badly a new swimming suit for my aqua gym class, I went there and found one a bit special, it is black and the top red with an inscription "Harley Quinn". I thought about Harley (Davidson) and only looked at the model of the swimming suit. At home I tried it on and it fitted perfectly exactly what I needed !

As usual it was scrabble day and we played in Myriam's garden, it was very warm but very windy too and we had to pay attention that the letters didn't fly away. This time I was again the last one, I think that's why the sun will shine until the end of the week. 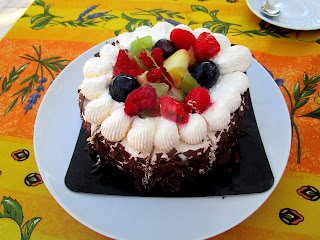 Myriam had bought this delicious cake and we ate it all !!

In my aqua gym class the young man who is our "teacher" noticed my new swimming suit and asked me if I knew what was written on my suit. I said no, something with Harley. He laughed and told me that it is the name of Batman's wife and a bad tempered one. None of us vintage girls knew Madame Batman and we had a good laughter. Now my name is made ! And I improved my general knowledge ! 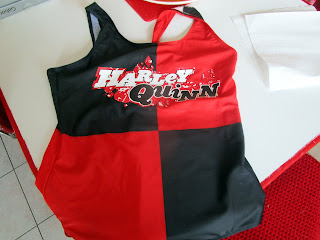 My swimming suit and Mrs. Batman ! I hope my grandson will appreciate !

In our painting course we learned a new technique for painting modern art acrylic ! 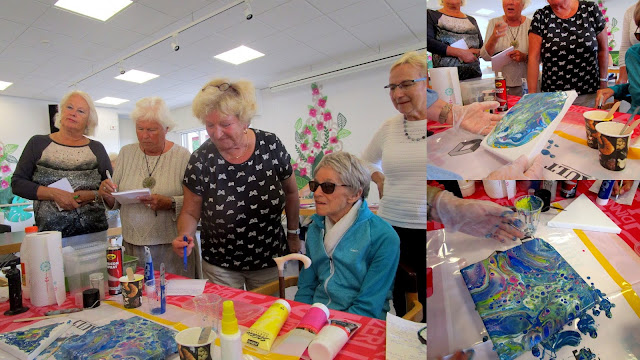 It was really very interesting you don't even need a brush, you just need a canvas your colors, glue, water and a silicone spray, mix the whole stuff and let it run over the canvas ! It gives amazing results !!

Waterloo has communal elections and one politician asked me if he could put his picture besides our mailbox. As he is the only one I like from the whole lot, I said yes of course immediately 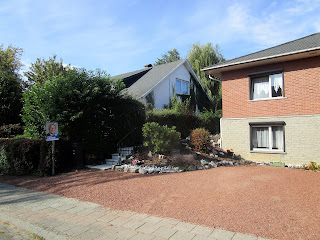 In the afternoon two guys came put up the pictures and now he smiles besides our mailbox ! I hope the stick is not an invitation for disrespectful dogs !

WORDLESS WEDNESDAY - WHY DO I WRITE ? 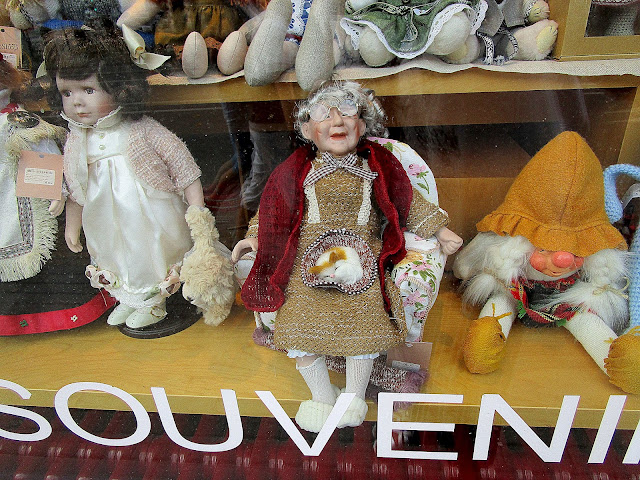 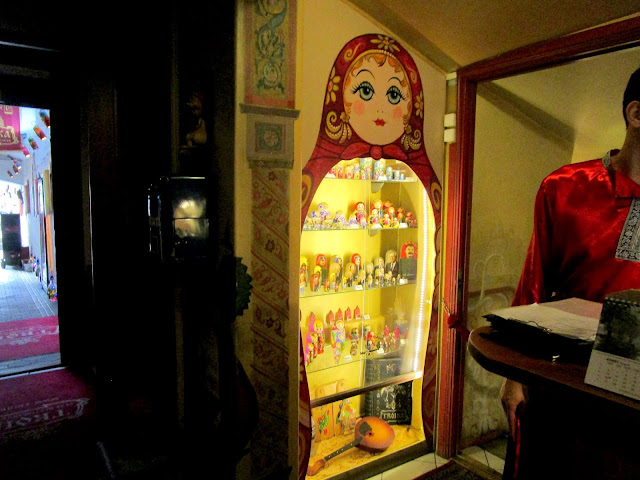 
I have got an email from Kate at Five Minute Friday, asking me why I write or want to write.

The reason is simple, since I learned to read and write, I have always loved writing and honestly the best notes at school was for my writings. My friends too enjoyed my letters, at that time there was no internet of course but  I wrote in my diary. I also invented little stories, which nobody read besides me.

When I discovered Blogs in 2006, I thought that's it ! Now I can write to my hearts content. But the big question was, in what language should I write ? My mothertongue being German I thought then I will only have German bloggers and in 2006 there were almost none. It was not very well known. The same was for French, I could have written in French too, but France was even more behind, there were only a few Canadians who had a blog in French. There were no translation facilities on the blogs neither, they were very simple.

I decided to try in English, and to my big surprise it worked, not so in the beginning because I had a big lack of vocabulary and when I read the posts today I have to laugh sometimes ! But I started
a blog ! I wrote and was surprised that I didn't get comments. I don't even remember where it was, but then I discovered Blogger and it started !  First it was one blog, where I mostly told stories about my cats. But soon it became too small for all memes and I split it into two, this one and  My Cats and funny stories there are so many cat lovers around I had to make a blog apart.

Now I couldn't imagine my life without blogging. It has become my hobby ! Over the years I have learned so much and been in contact with people from all over the world.

I write stories about my childhood, my life, my adventures, my travels .... Writing lets me forget all worries, I am in another world. I only regret one thing, that Websides, Blogs and Internet in general didn't exist when I was young. I was already 63 when I started but I also learned that it is never too late to learn new things and go with the future ! 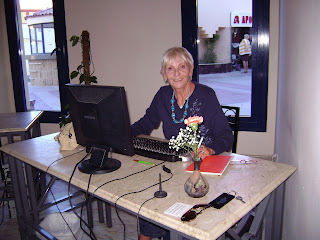 After Amsterdam we had a quite long drive to Copenhagen, with real fantastic views, before  we crossed Europe's longest bridge The Oresund Bridge which is an approximately 16 km long road and rail link between Sweden and Denmark.

When we arrived in the Copenhagen, we made a tour of the city, and our tour leader showed us highlights of the city, including the parliament house, Tivoli, town hall, Rosenborg, and the little mermaid statue. I took a lot of photos, but unfortunately I don't always remember what building or place it was. At least it gives an overlook of the city and for me personally good memories of my short visit in Copenhagen, one of the largest cities in northern Europe. 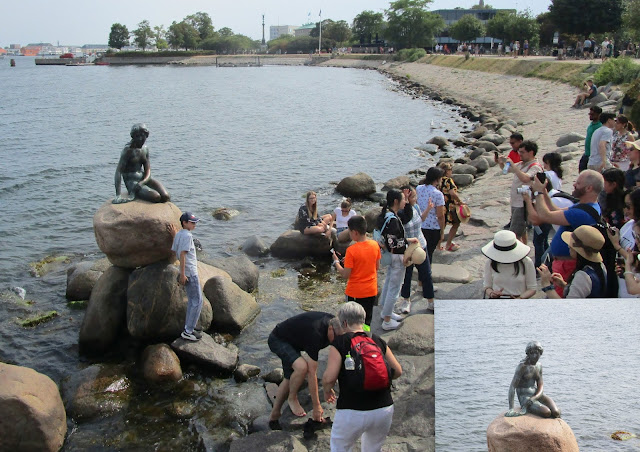 Saturday I wanted to bring over a cat tower to Nicole's but she wasn't there, so I took an appointment in the nearby garage for my yearly car inspection. And as just opposite was a sports shop I bought a new swimsuit for my aqua gym classes. The old one had become bigger and bigger and was not fitting my body anymore but hanging around in folds ! Although I didn't try it on it fitted perfectly once I tried it at home. 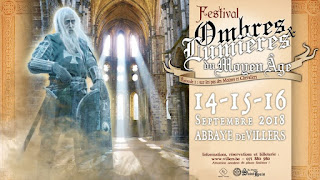 I wanted to take some pictures of the ruins and the medieval village they had built in. It really looked beautiful. 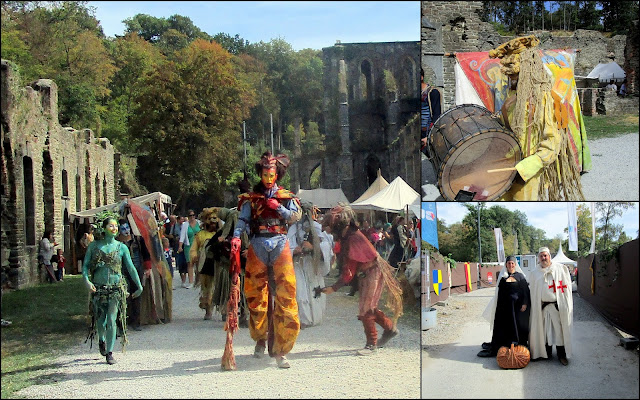 We met a lot of people directly out of the middle age. A bit scary, but we are used to worse ! 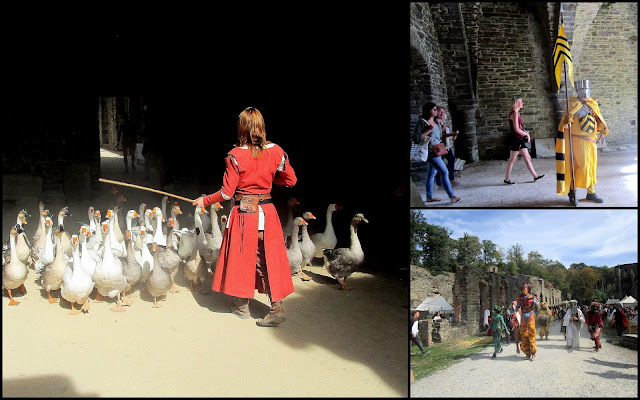 The girl who walked the geese was really brave, a German shepherd dog helped her. 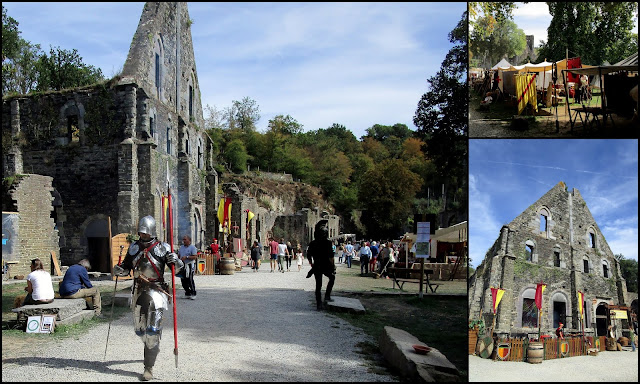 I had been often in these Abbey, in all seasons, because it is just so beautiful and seems always to be different. 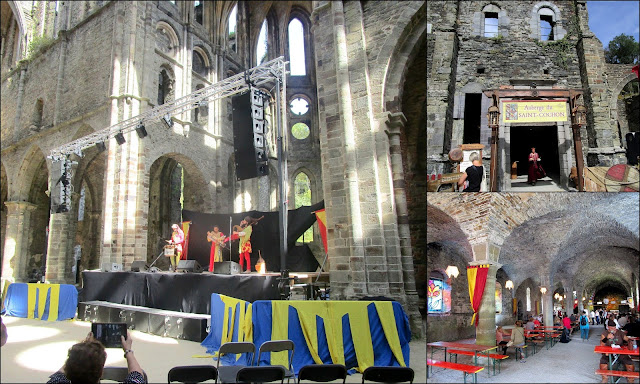 So much life and laughter and fun in these ruins, seemed almost unreal. And all people were in such a good mood, 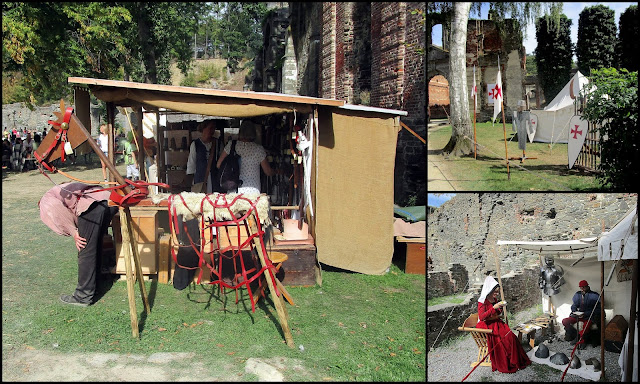 we were laughing and joking together, although we had never seen each other. There was this skinny metal horse and the lady who ate a deliciously smelling onion soup ! 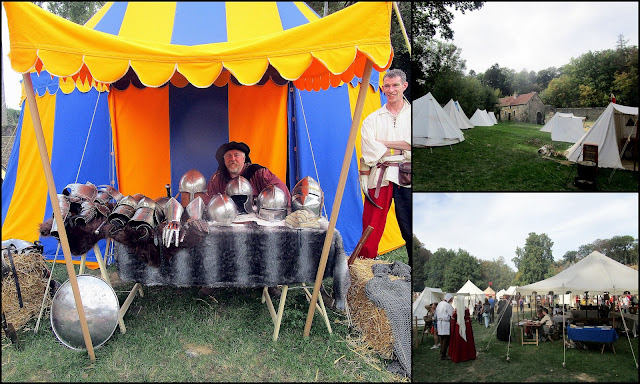 This man showed me proudly his helmets, a little boy tried one on and had difficulties to take it off ! 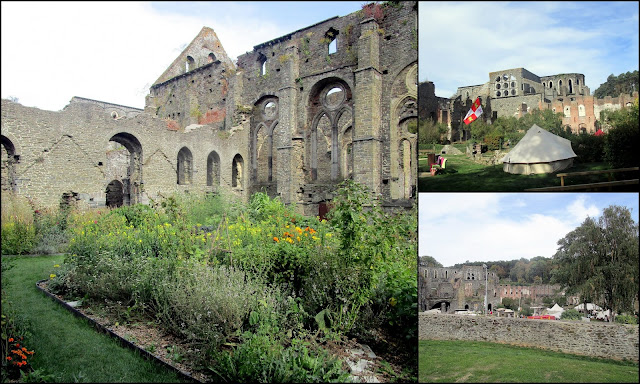 some places remained untouched, like here the garden with different herbs and wild flowers, good for the bees.

After two hours of walking around, we left and had a drink in the opposite located Brasserie. The sun was shining and it was warm, what a beautiful day !
Posted by Gattina at 00:27 7 comments: