1. After Aqua Gym, we celebrated Christmas a little, but nobody had thought of bringing a bottle of bubble wine, so we did it like old ladies with tea ! Nonetheless  we had a lot of fun !

2. I still had some bits and pieces to buy for Christmas, so I went to my favorite Indian shop !

I like to walk through and admire all these beautiful things they sell in favor of an Indian region to support schools, orphanages and street children. All sale benefits are for them. Not only you can find very original little gifts but you help the children at the same time. And then a miracle happened Mr. G. suddenly became curious about this shop and went with me the next day, to choose my Christmas gift !

I think that was the first time since at least 6 years he went with me out for shopping !

3. My son sent me the last pictures of grandson Toby which he had taken on St. Nicolas which is very much celebrated in the Netherlands. Even more then Christmas. 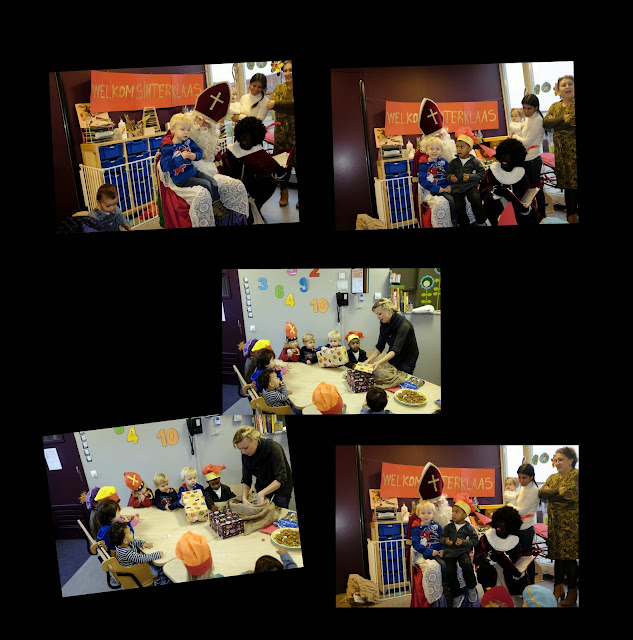 Toby with St. Nick at Kindergarten, where St. Nick brought gifts in a big bag 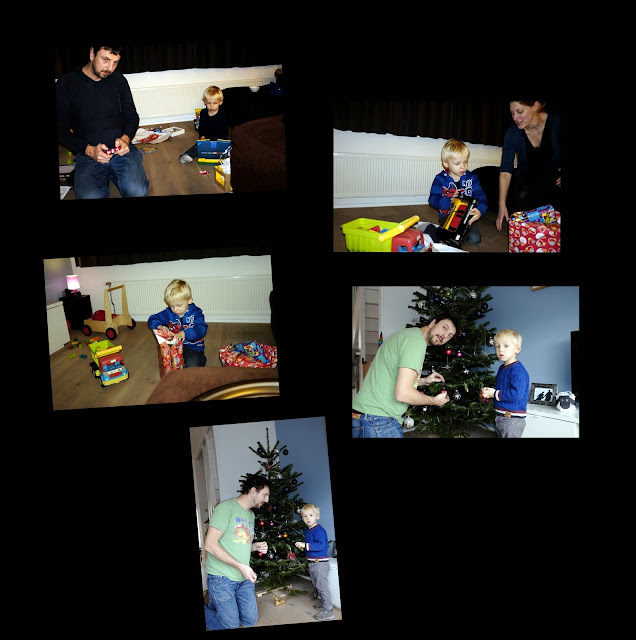 He also came to his home, where he celebrated with Mum and Dad, and Toby also helped Daddy to decorate the Christmas tree, which they had chosen together 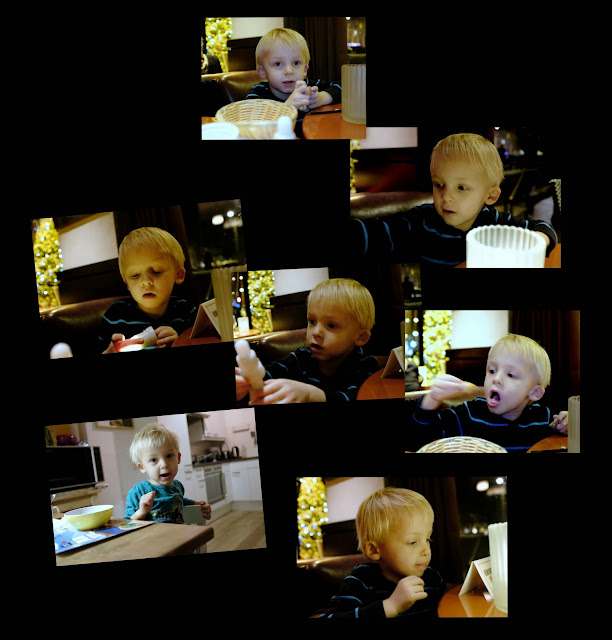 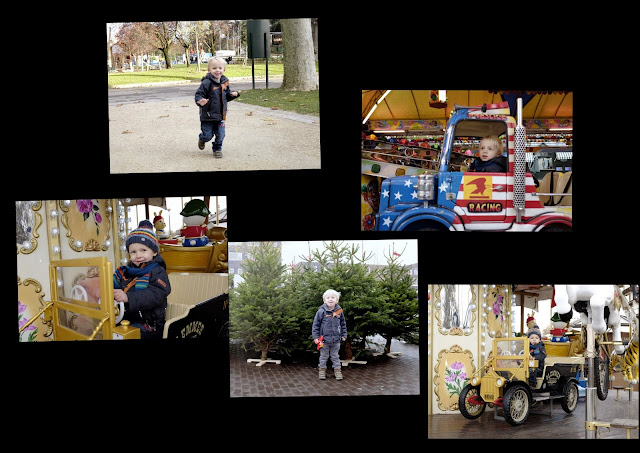 My son is a professional photographer and his little son is his favorite model ! It's so nice to get all these pictures, because it allows us to participate a little in his daily life. Now when I receive photos from Toby it seems to me as if I had seen this face long time ago and then I realize, that we have almost the same face (especially when he is angry) when I was his age from what I can see on the few pictures I have which my father had taken in 1946. 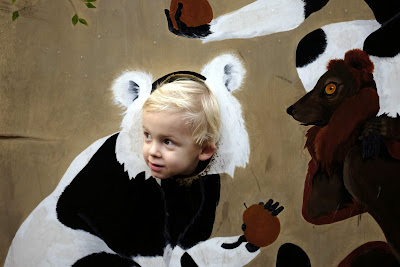 And from all these photos I like this one the most ! 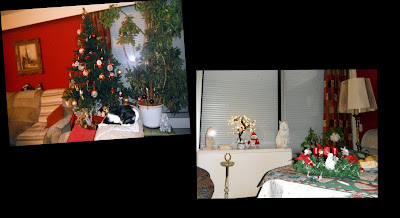 Dominique popped in to see our Christmas decoration and also to give  back her key, fortunately we always have her spare key, because it happens quiet often that she forgot her keys inside ! And while we chatted about her grandchildren another neighbor also arrived, she asked us to take care of her cat during their holidays in France.

5. In our painting group we also celebrated Christmas and I think after a couple of bottles of bubble wine, some paintings turned into modern art ! A classmate and I had brought cakes, but it was too much and I returned home with my Panettone the traditional Italian Christmas cake.

AN ENGLISHMAN IN NEW YORK

If ever you are an English-English speaking person and visit the States, you will realize that the Americans apparently also speak English, but sometimes it leads to confusions. First there is the accent. Every sentence is pronounced as if the person has a very small to a very big potato in the mouth. The smallest potato is in Boston, the biggest one is in Texas.

That's why in Texas people asked me if I came from Boston. Belgium they didn't know at all, but Brussels they had heard of probably due to the European Union which is located in Brussels. And TV talks about Brussels and not enough about Belgium.

The Englishman shouldn't ask for toilet or loo, but for the restroom, although he had no intention to rest there, especially not when he is in a hurry.

Biscuits become cookies, which the English only knows from his computer, which has the advantage not to get an indigestion.

There are no chaps or lads anymore but guys and please pay attention to pronounce it correctly otherwise it could became "gay".

Cars have no boots but a trunk and don't think that you suddenly have a trunk of a tree in your boot.

In the front of your car you don't have a bonnet anymore but a hood. Very confusing because bonnets are worn on your head.

Goods are not transported in a lorry but in a truck, although thanks to American movies, trucks are also existing in the UK by now.

He doesn't sit in a garden but in a yard and tries to calculate how many yards are in a meter, which is used nowadays, but elderly Englishmen sit in their gardens, but still calculate in yards.

Little children are not sitting in a buggy but in a stroller and that means  not a stroller in a park walking around and looking at girls.

There is no lift in a building but in an elevator which elevates him to the 10th floor, which doesn't really matter when both go up and down and don't get stuck.

His clothes are not hanging in a wardrobe but in a closet which in old English means a restroom. Strange.

The letter box becomes a mail box but it is "The postman always rings twice" and not the mailman maybe he doesn't ring at all.

He does not wearing trousers in the States, but pants. Fortunately underwear is the same word.

On TV there are no films but movies, but a film is still filmed and a movie is filmed too.

A Flat is the word for an apartment. He could meet someone in in the States who had broken down in his car and tell him that he has a flat he would probably think,  it was a strange moment to tell where he has an apartment.

The other way around is also confusing for the poor American who visits Europe. Some help is here, because in non speaking English European countries, they learn British English and not American.

But all this doesn't matter as long as we can communicate together even only with hand and feet ! 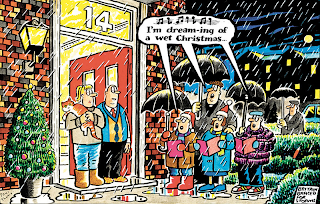 MY WEEKEND OF DECEMBER 14 AND MY WORLD

This weekend was so busy that I even neglected my blogging duties and have to put two days in one post !
Saturday morning a groaning Mr. G. carried up from the basement, one suitcase and several boxes filled with Christmas decoration. After having put up the tree and draped the lights around it, he escaped, and I started the decoration. After a while I was fed up and stopped, I lost the overview of all this stuff !

Instead I went to the Waterloo Christmas market. When I came back I continued and here is the result. 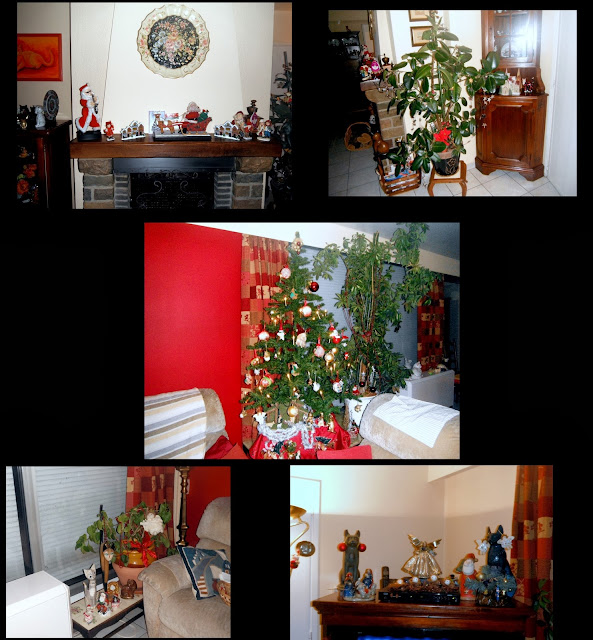 The living room now looks christmassy and I love our tree decorated with some new balls and decorations. 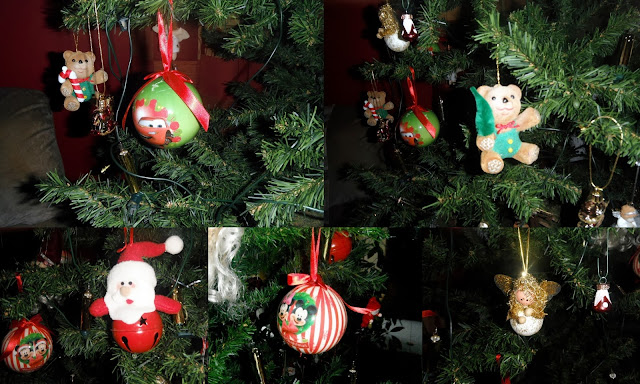 For little grandson Toby I added some child friendly things. In the evening when it was dark I put on all the lights and we were both satisfied with the result.

On Sunday morning I went to the Brussels' market met my cigarette seller and did some shopping especially fruits and at 3 pm my friends came and we went together to a Gospel concert in the nearby church. Last time I had been in this church was for a funeral and that was years ago.

As my neighbor's daughter was involved in the organization of the concert, she had reserved us the best places just in front of the singers. 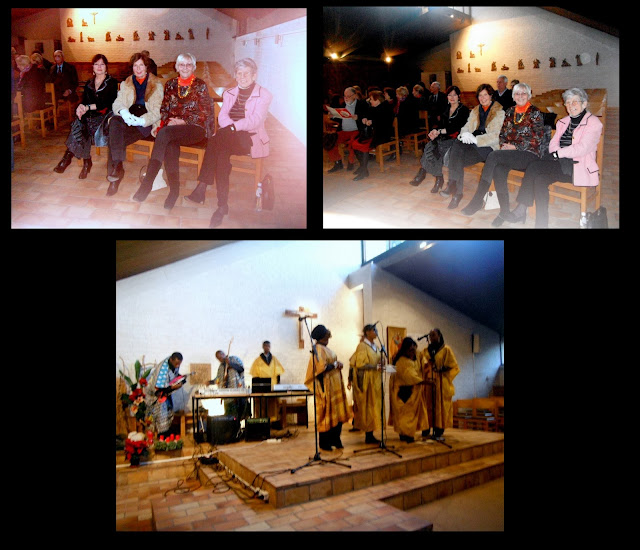 From left to right, Ilona, Nicole, me and Vivienne.

The group came from the Congo an ancient colony of Belgium. They sang in their language and also two songs in South African language in honor of Nelson Mandela. Only two were in English, "Amazing Grace" and "Oh happy Days". 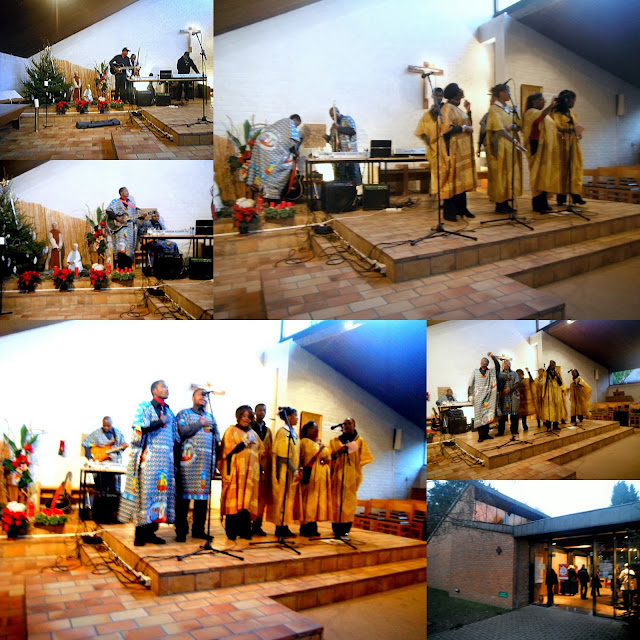 There was such a rythm in their songs that it itched in our legs and despite our vintage age of  70 to 75, we stood up and danced ! I thought if Mike Jagger still hops around with 70 we can do that too. The singers were delighted and invited the others too. We had a lot of fun and I thought it's never too late to experience new things, like dancing in a church (and in a catholic one !) !


Oh when the Saints

In excellent mood we went to my home where I had put some bottles of Champagne in the fridge and with the cozy Christmas lights we ended the evening. Mr. G. celebrated with us and we laughed so much that our bellies hurt.

It was around 4 and getting slowly dark when I arrived Saturday at the Christmas market. It was the first time that Waterloo had a real one with around 20 chalets. 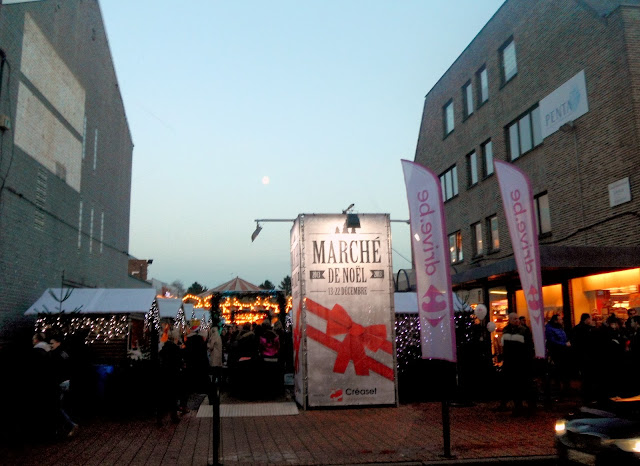 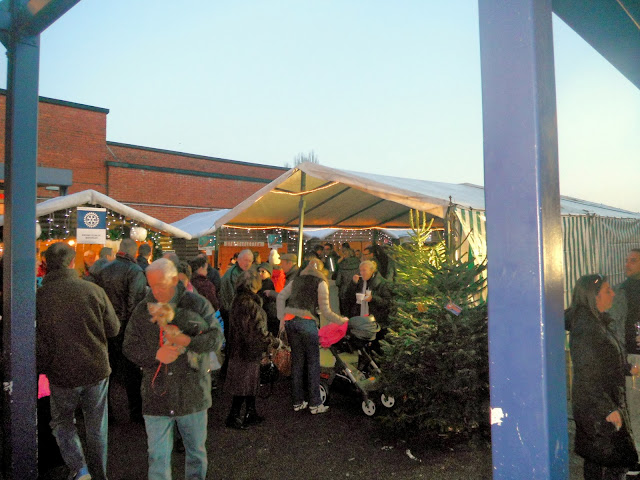 There were a lot of people and as it is in small towns I also met some people. 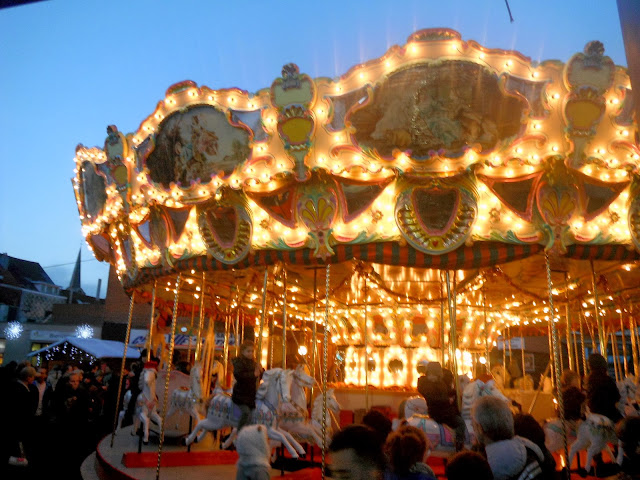 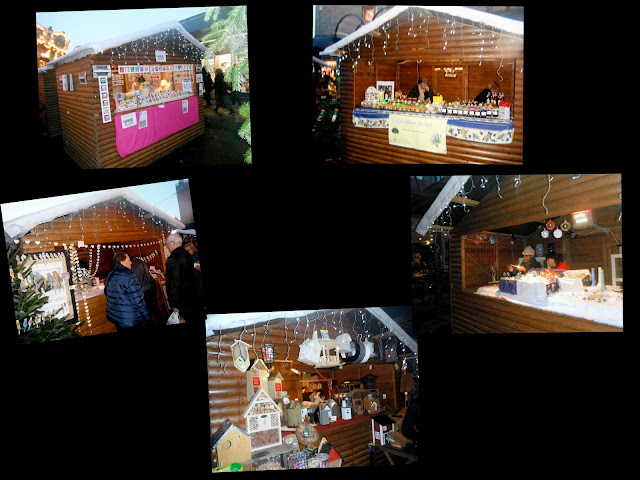 There were a lot of chalets selling delicatessen and some also handmade things. 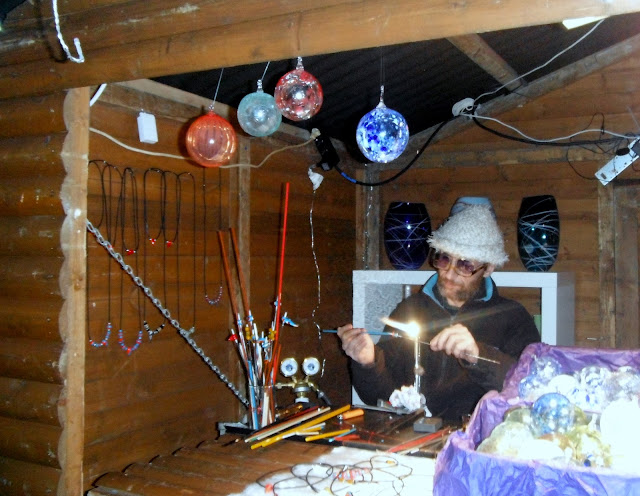 I watched a glass blower for a while 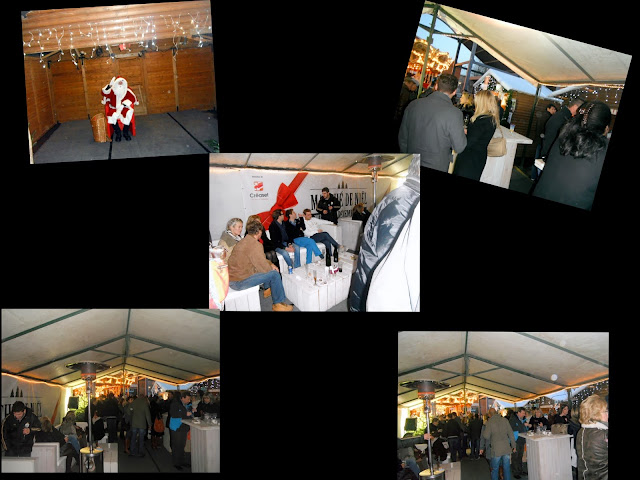 In a big heated tent, people ate and drank mostly Champagne with oysters or other seafood, but also the never missing snails. Father Christmas watched over the crowd and greeted me when he saw me with the camera. When I had seen all the chalets I left 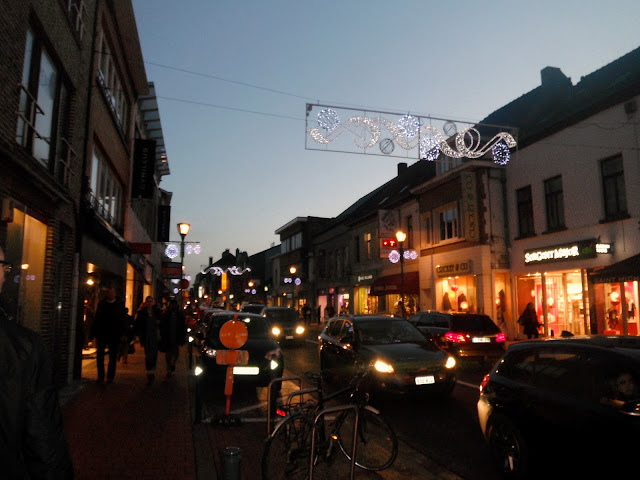 and saw the main street of Waterloo in its Christmas lights.