1. It was unusually hot more then 30° up to 36°C (86 - 98 F) and we are not used to such temperatures in Belgium. I was lucky to live outside Brussels, because in the city it was even warmer and sticky.

As we have no aircondition, (it's not worthwhile) I opened all windows early morning to cool down the house, and then closed the shutters and left the windows a little open. This helped to keep the house more cool.

2. With these temperatures I really had no courage to move or to do anything which asked some effort. I just did some household scores when it was still cool but then I watched TV with a big fan standing besides me. In the afternoon I could blog outside under the Pergola and blog as there was a little wind.

3. Fortunately I remembered that we have a wonderful swimming pool in Waterloo, and I decided to go there each morning at noon time, when all people left for lunch and had enough space for me alone to swim and do some acqua gym for 45 min. When I returned home I felt like a newborn !

4. Then came a thunderstorm and rain and it cooled down a bit, so I could sort out the clothes and stuff to put in my suitcase. I also prepared some pre scheduled posts for themes and played "Easter egg hunting" by looking for my cables, adaptors, battery chargers etc for my camera, notebook and Kindle. As usual they were all at the same place, only the places had changed.

5. And while you are reading this now, I just arrived in Eastbourne UK to spend a week with my friends as I do each year. Of course the first day I won't have time to write anything ! 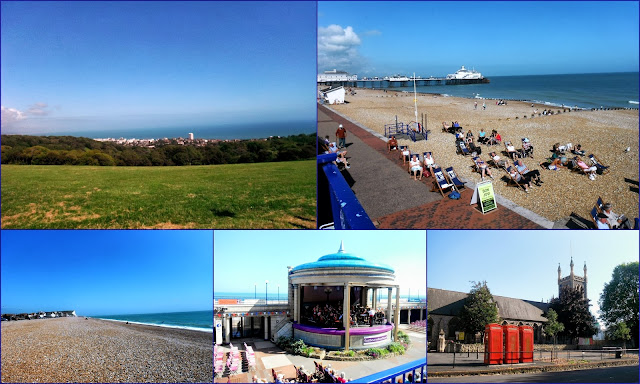 Maybe because I can't find the right potatos in Belgium for this simple plate,  I adore eating them when I am in the UK !

So while you are reading this I am sitting in the Eurostar train on my way to London, where I stop for a few hours before I take the train to Eastbourne to spend a week with my friends at the English South East coast, as I do each year.

As soon as I  am in London and it's lunch time I go "Jacket potato" hunting ! I usually take them with bacon and cheese, but sometimes also with shrimps. I just love them. It reminds me my childhood when my grandma baked them because in the part of Germany where she lived it also was a common plate. Usually it was served with quark and salad. In Belgium, France and Italy it is completely unknown.

As part of the upsurge for more healthy fast food, the baked potato has again taken to the streets of the UK both in mobile units and restaurants. The fast-food chain Spudulike is specialized in baked potatoes. Personally I have never tried them out. 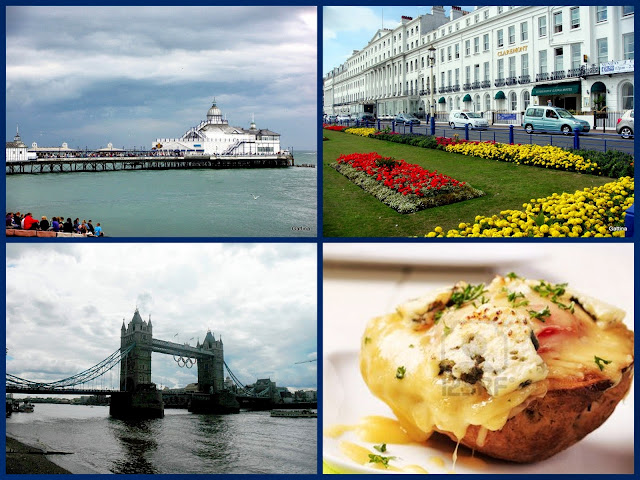 Concerning the new Gmail presentation, in case you want to change it into "normal" again !

I got some help from a blogfriend to turn it back to "normal". Go to the little wheel on the right side of your incoming mail box, just besides the arrows, click on it and you will have the settings. Click on "configure inbox" and set it to "Primary". Then it will appear like before ! 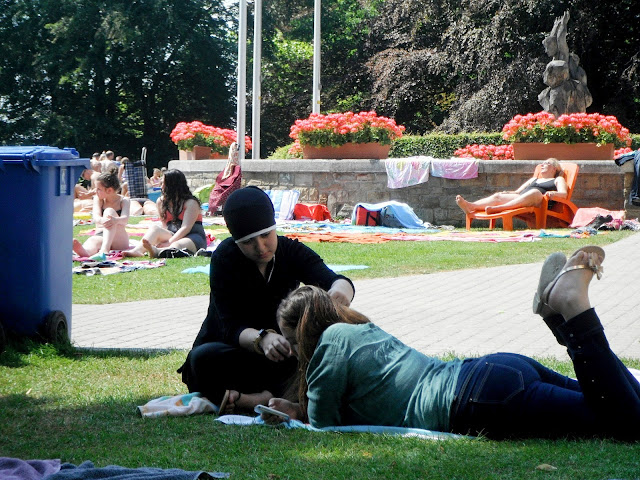 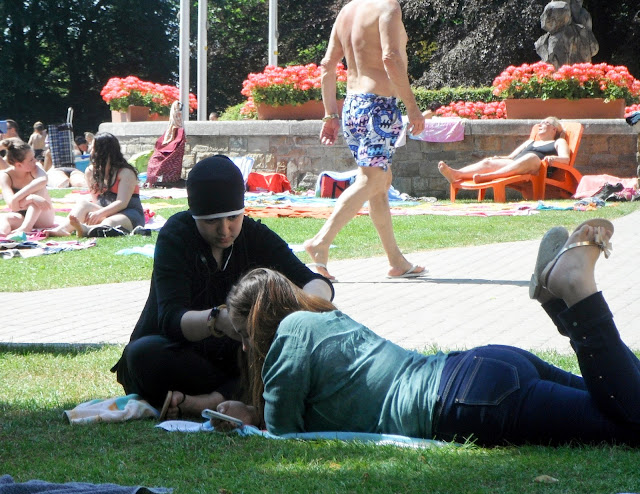 Friendship
Posted by Gattina at 06:00 7 comments:

CORONATION OF THE KING OF BELGIUM

The country which became mine got a new King on Sunday July 21, the National Day. He is the 7th King of Belgium.

The ceremony capped a day of transition which started when Philippe’s father, the 79-year-old Albert, signed away his rights as the kingdom’s largely ceremonial ruler at the royal palace in the presence of Prime Minister Elio Di Rupo, who holds the political power in this 183-year-old parliamentary democracy. Of course I watched both events on my computer and tried to take pictures, as I was not invited ! Or I didn't get the invitation. Can happen with  our mail service 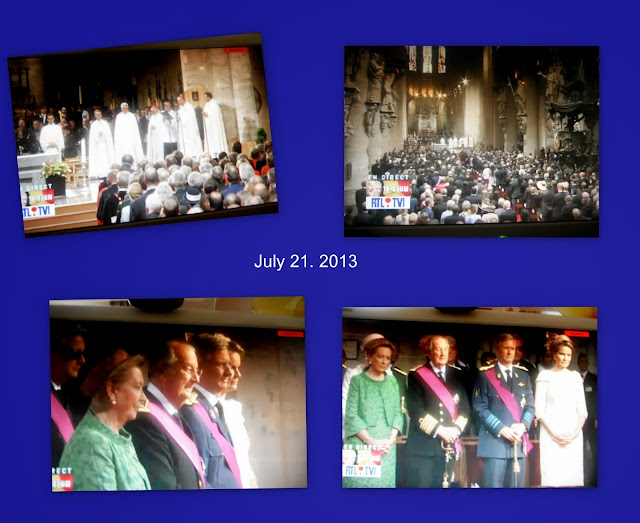 But first they all went for a mass to church., where the whole Royal family and the Government members were present.

I didn't listen what the priest said, but rather looked at the dresses which the Royal females wore. 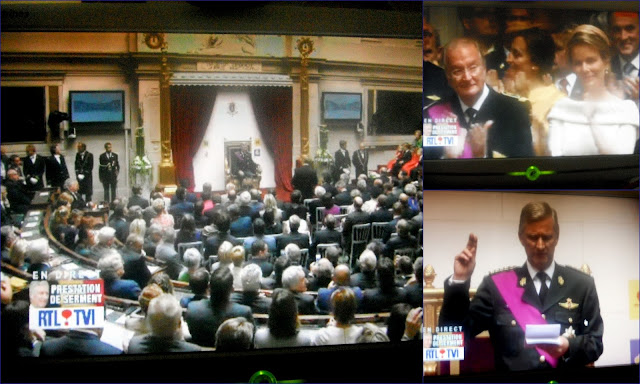 After the abdication of King Albert, which I missed, I watched the coronation without crown. I was disappointed. King Albert in his last speech thanked his wife for her support and sent her a big kiss; This was quiet unusual but very much appreciated. It just was so cute. 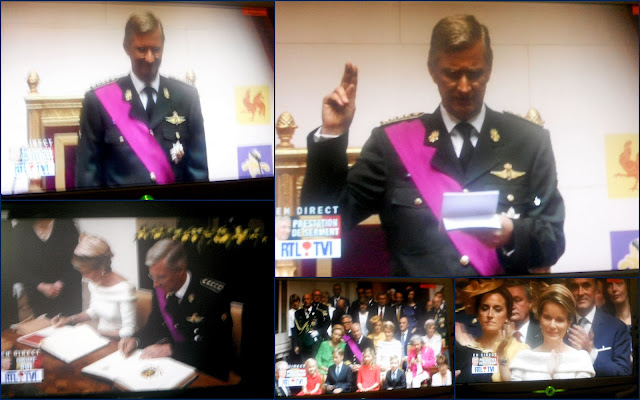 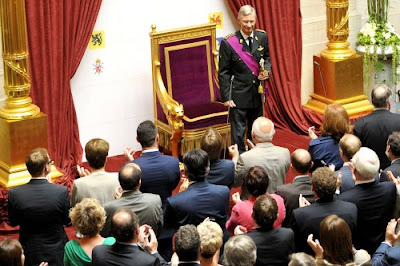 Less than two hours later, the nation got its seventh king when Philippe, 53, pledged to abide by Belgium’s laws and constitution.

The new King astonished all Belgians he made it real good. People had been a little doubtful about his capacities because he is a very reserved person. But on this day he suddenly became another man. 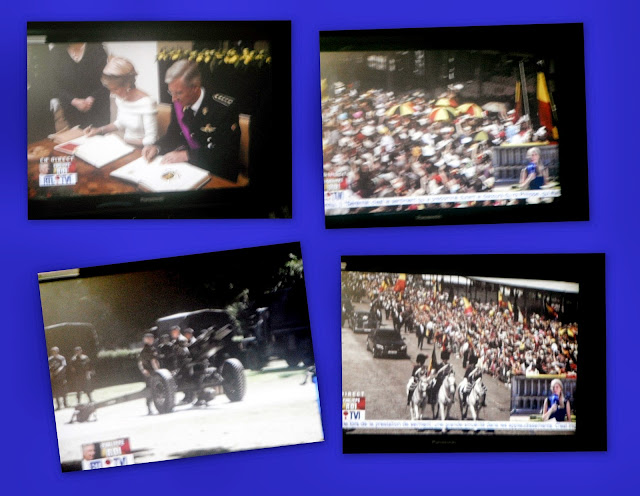 After both had signed, 101 canon shots started in honor of the new king. 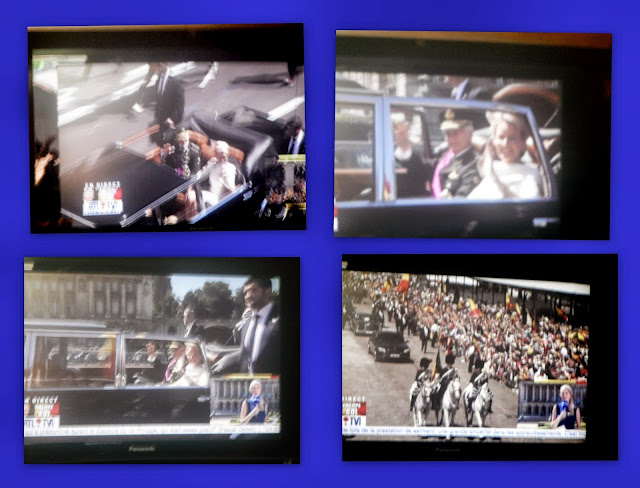 They then drove in the open car which they also had used for their marriage, from the parliament to the Royal Palace.  Belgium has no golden state coach. Crowds of well-wishers cheered the royal family’s every move, Belgium was happy with the new king.

Then they all appeared on the balcony of the royal Palace in Brussels. 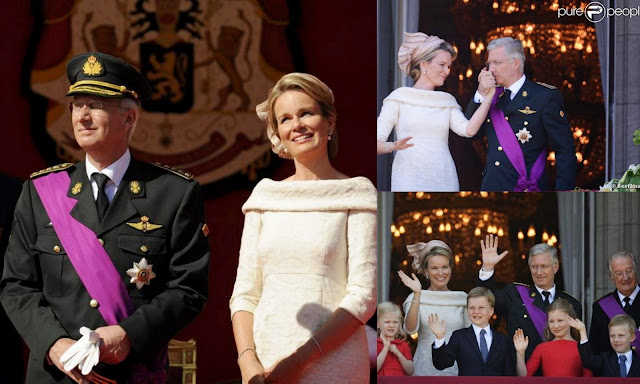 To have some better pictures I "stole" these somewhere on Internet. 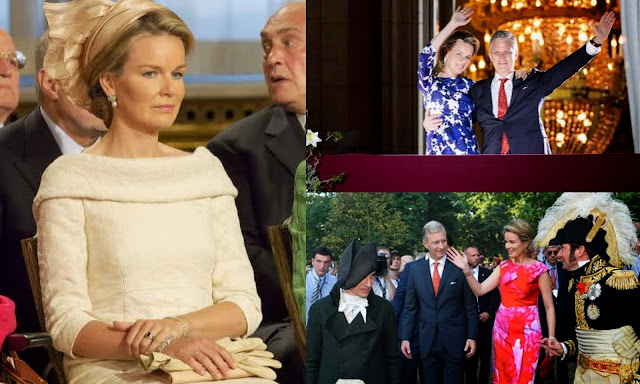 It was a terrible heat (32°C) and it must have been very difficult for all of them and the other participants.

The Queen changed dress 3 times, for the coronation she wore this creme dress, which made us all think of the wedding dress of the old Queen Fabiola which she wore in 1960 ! To greet the people in the Brussels Royal Park she wore a red dress, which was already better and in the evening for the firework a blue one. Usually Mathilde has a very good taste but this time she disappointed a little.

I left my computer and the ceremonies and continued life in the Waterloo Park together with friends and lots of people ! 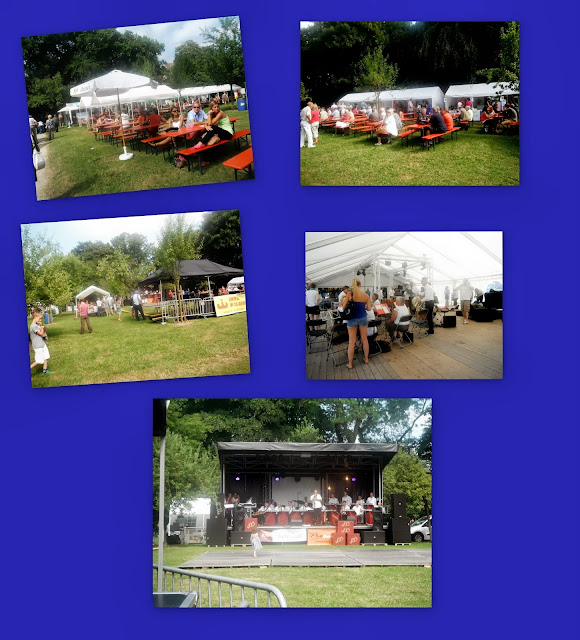 It was a very cheerful atmosphere, lots to eat, drink and dance ! 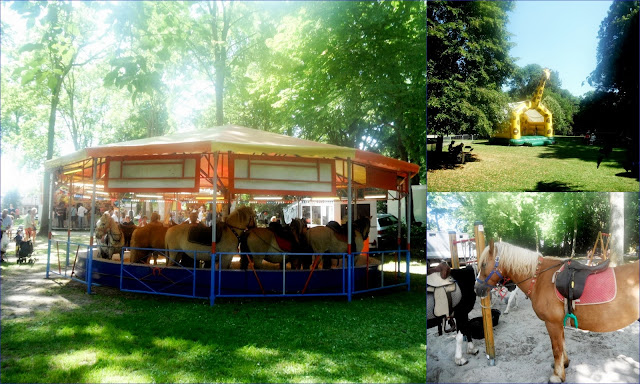 For the children there was a carousel with real little horses and other things to play on.

The day ended with fireworks a very big one in Brussels and a smaller edition in my town.

If you want to have a look here is a BBC video of the coronation
Posted by Gattina at 06:00 15 comments:

Labels: Our world. Coronation of King Philippe of Belgium

Helps you to remember what you have done on the weekend of July 20 . If you participate please put the little logo on the top of your post and leave your link.

This weekend was very special, because Belgium celebrated its National Day as usual on July 21, but this time there was also the abdication of King Albert II and the enthrownement of his son Philip. All on the same day. 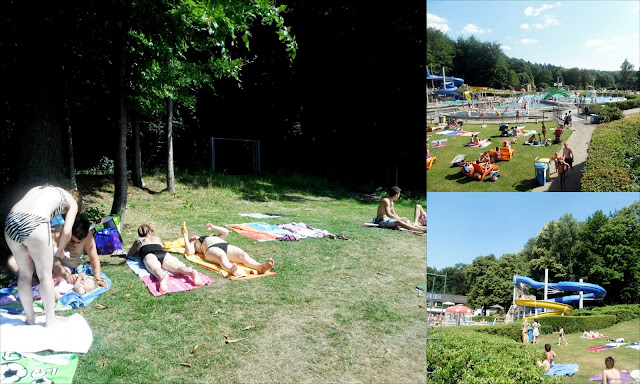 So Ilona  and I decided to go into a park near Brussels which has also a huge swimming pool and is surrounded by trees, so we could lay in the shade. Ilona tried to get some colors while drying her bathsuit. I prefereed not go into the water, because I am still under antibiotics. We had a real nice afternoon !

On Sunday morning I watched the Royal celebrations. 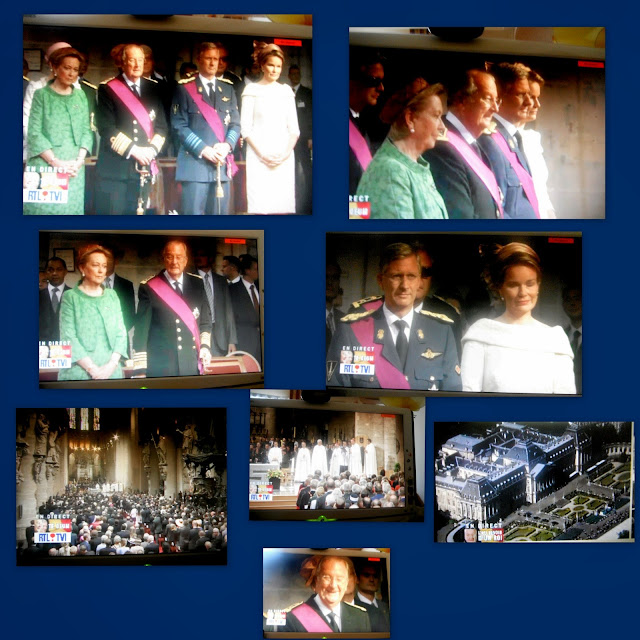 It started at 9 am with a "Te Deum" (mass) in the St. Gudule church, where royal weddings and funerals are always celebrated. This time it was the enthrownement of the new King. The whole royal family was present (except the little children, the new King has 4) Above you see the "old" King and Queen and the once to be, Philip and Mathilde. The church was packed with government members and no one else ! No royal guests at all, which was rather disappointing.  I saw the old King laughing in the church I thought he is certainly happy to retire and enjoy his hobbies.

After the church they were driven to the parliament where the abdication and enthrownment took place.

For the first time since I "know" Philip, he wasn't shy, not a sleeping pill, but a completely other man, very cool and he swore on the constitution without any hesitation in his voice as if he would do that every day.

After the ceremony they were driving in an open car to the Royal Palace and waved from the balcony to the crowd.

Of course my friends and I hadn't the courage to go to Brussels in this heat and preferred to celebrate in
Waterloo. 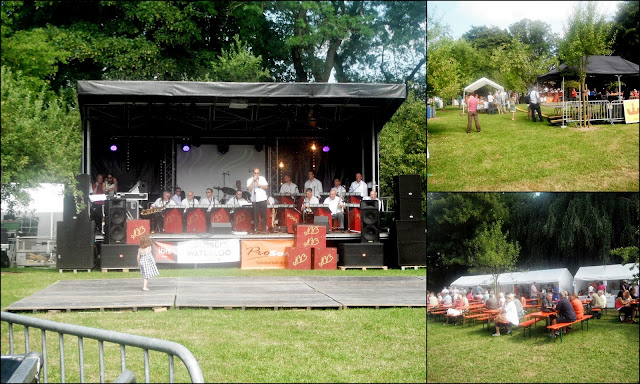 In the Waterloo park everything was ready for the National Day and to celebrate the royal events. We went there for a drink and listened to the different bands which were performing. There was also a tea dance.. From Rock to Pop over Glen Miller we heard everything.

Of course we discussed the dresses of the two Queens, and had all the same opinion. Green didn't suit Queen Paola, it gave her a green face, and the white winter dress of Mathilde looked a little old fashioned.  We sat there in the shade under a tree and discussed and laughed and had a very nice afternoon. If you live so long in a little town as I do here in Waterloo since 38 years, you know a lot of people too, so finally we were a whole group sitting at a table. The mayor and some other members of the municipalty greeted us and we joked together.

Tonight there will be a big firework in Brussels, but also here in Waterloo, maybe I can see a little bit from our house because I am too lazy to go out at 11 pm, although I could go to my friend who has a balcony just there were the firework will take place. I pity the poor dogs who live there !

I think Google's employes have too much time, so they invent so said ameliorations to things which work perfectly without ! Now that I have learned to avoid the senseless G+ forced subscriptions, since a few days my Gmail box had been improved too ! 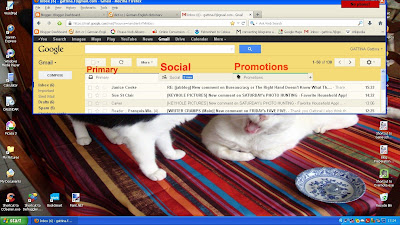 Suddenly the comments of my Blog friends are filed in 3 categories. Some of them became "Primary" (not primate) and others became "social" as if they had been unsocial before.

Honestly I don't know why  my blogfriends  are devided into two cathegories. Sometimes I find the Primaries in the Socials and the other way around, there is no logical reason. In the promotions are not always promotions but other things too, like train time tables and fares, for which I had asked for, and wondered that I didn't get an answer.

To allow people to loose a little more time, you have to open 3 files  to see who wrote you a comment or gave an answer to a request. Can anybody tell me why the Gmail box is now better ? I prefer to have an overlook on all incoming mails and decide by myself what is what !

I think the only solution is that I google "Why is the Gmail box now better" ? To know the answer !