FLOWER CARPET ON THE GRAND'PLACE IN BRUSSELS

Since 1986 a flower carpet is made on the Grand'Place in Brussels.

The Flower Carpet is 70 m long by 24 m wide. 1,680 m² of begonias, dahlias, grass and bark.
A hundred volunteers assemble the carpet in less than six hours.
The first Flower Carpet of Brussels was created in 1971 and has been a showstopper every two years on the Grand-Place since 1986. It is exposed from August 12 to 15th.

As it was so hot I thought I better watch on the Webcam of the Grand Place. As it should start on the 12, I  looked at the Webcam already at 6 pm on the 10th and what did I see : 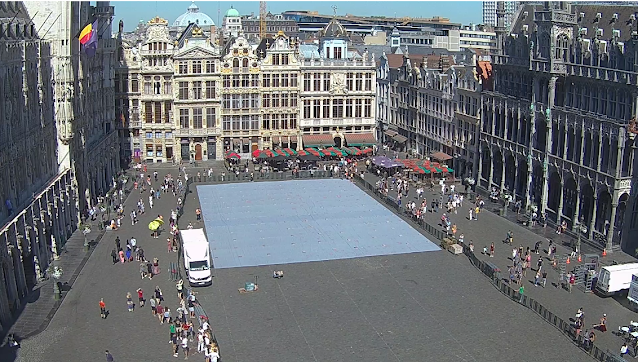 the place half covered with a fabric or plastic 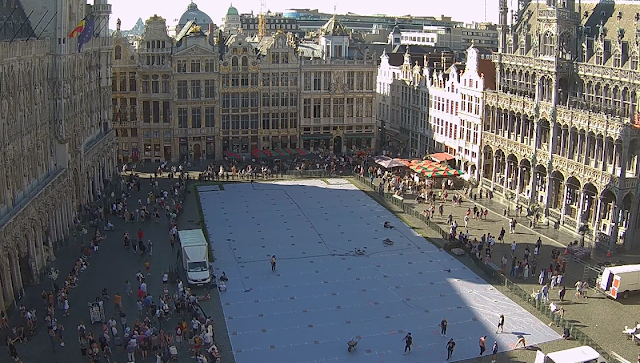 on the 11th morning it hadn't made a lot of progress !

I thought they have to hurry up if it should be ready for the next day in the morning, but the Webcam showed me this at 11 am 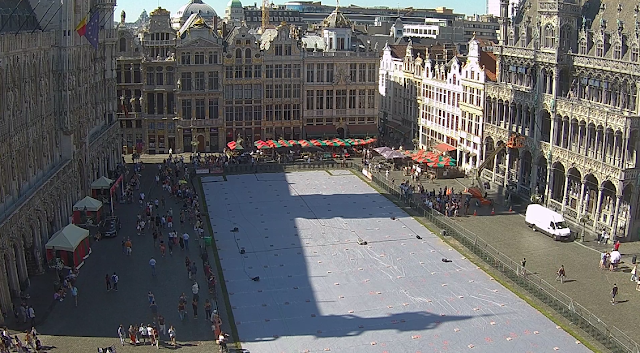 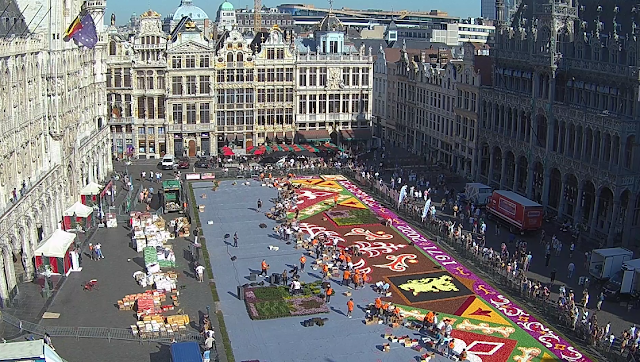 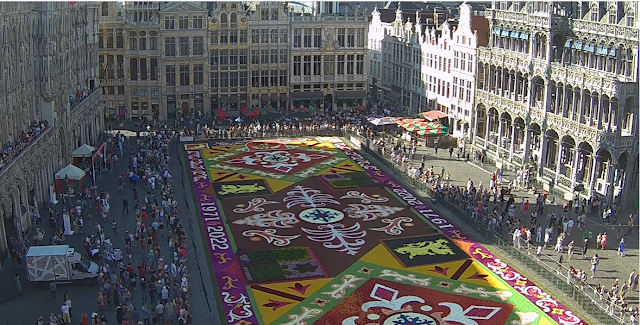 and at 10 am on the 12th it was finally ready and people arrived or were already there. The poor flowers in this heat ! There were not so many people probably because it started to get more and more hot. They probably arrive late afternoon or evening.

and this is the pattern of the 2022 carpet, the first one since 4 years ! Usually it's done each two years, but due to the Corona problems it had to wait !

On Sunday 35° are announced, clouds and a thunderstorm .... I sincerely hope the weatherman is wrong !

All pictures I took per screenshot and am quite happy about the result. (except the pattern of course)

When I opened the curtains on Monday I said a not very elegant word, but it came out from the deep of my heart ! The sun was shining and the hot weather continued ! When I think that I complained in my posts about the cold and rainy weather at least to 80 % now it's the opposite.

Fortunately on my terrace it seems to be cooler, because there is always a bit of wind because my terrace goes around the corner of the building. I asked Nicole if she doesn't want to come, because in her apartment it's quite hot and she doesn't support the heat very well with her brain cancer. She agreed immediately and I picked her up, as she is not allowed to drive anymore and also she couldn't. She became very very slow when she walks or in doing something, but her brain still works probably better then mine !

We spent the whole afternoon sitting under the two parasols and chatted. She still can't understand that from our scrabble group or even from the painting class nobody calls her or answered her calls, it's really disgusting that the so called friends, once she is so ill dropped her like  a hot potato ! I have to say it's the same with me, they must be afraid of widows ! No support at all ! I learned a lot about friendship ! Two of them met a man and forgot the girlfriends. I hope it will last and the men stay and if, then it is because there is money behind. Women that age should not be so naive as teenagers !

As the weatherman announced even higher temperatures, I went to my deep freeze shop and took my neighbor with me as she can't drive. I bought my daily plates for at least 3 weeks and also ice cream and fruits. Now it can stay warm I don't have to go out.

While I was sitting behind my computer suddenly the sun shined on my head, one of the parasols had flown away ! I looked around me but couldn't see it at all, not even on the lawn beneath.

I went to the girls on the first floor and  asked if I could have a look from their garden on the balconies, and we did ! Finally we found my parasol on the balcony of the second floor ! It looked so funny that we had to laugh ! It was only the upper part which had flown away !  The only man of our building lives in this apartment, he was not there and I left a note. In the evening before I went to bed I just checked the entrance and there on the floor lay the parasol ! 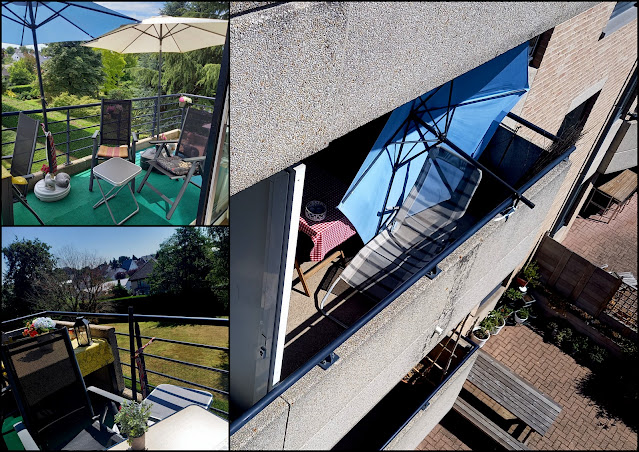 The next day I fixed it with a tape and a cord and now I hope that not even a storm can blow it away !

That's what I thought but in the afternoon while I was on the phone, the wind again lifted the parasol, this time the whole thing but couldn't fly away it only made it over the barrier and was hanging there on the cord. I interrupted my phone call, pulled the thing inside and in it's place. Then I took a very strong tape and fixed the other side too. Now I hope that even a hurricane can't blow it away !

The heat continued and will continue until past the weekend which paralyzes a lot of outside jobs.

My two neighbors and I decided to escape the heat and go to the Lunch Garden where it was nice and cool and where they also had mussels ! As it is the same restaurant chain the mussels were as good as the once we had a few weeks ago and after lunch we stayed there for two hours, I had a coffee and one went shopping it's in the same building.

At 3 pm we returned home and the rest of the day I spent on my windy terrace so I didn't feel the heat that much.

Another week is over and I wonder when we can finally disperse Rick's ashes. It's complicated because my son has just finished his Covid and feels quite tired and Toby has school holidays and is in a summer camp. I think we have to wait until the holidays are over in September. 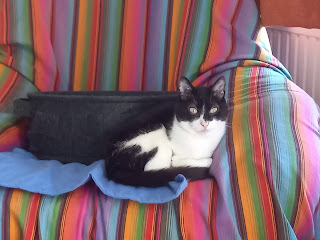 It's so hot that Rosie sleeps outside her basket !

more participants at Susanne at Living to tell the Story.
If you have difficulties to comment, just scroll down to :
Subscribe to: Post Comments (Atom)
click on it and then you can comment !
I have the same on other blogs and it took me quite some time to find out !
Posted by Gattina at 07:00 7 comments: 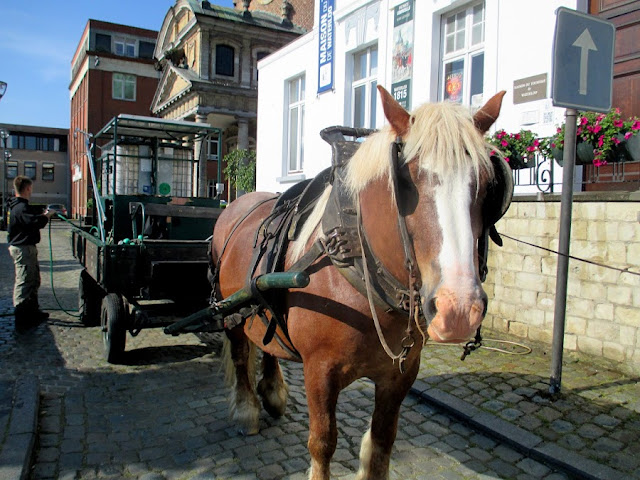 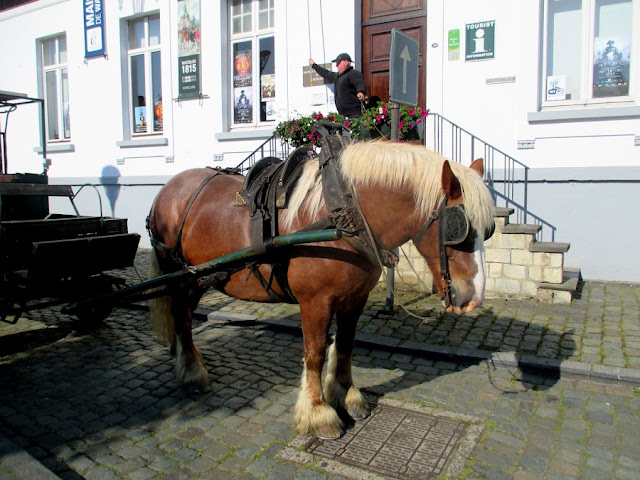 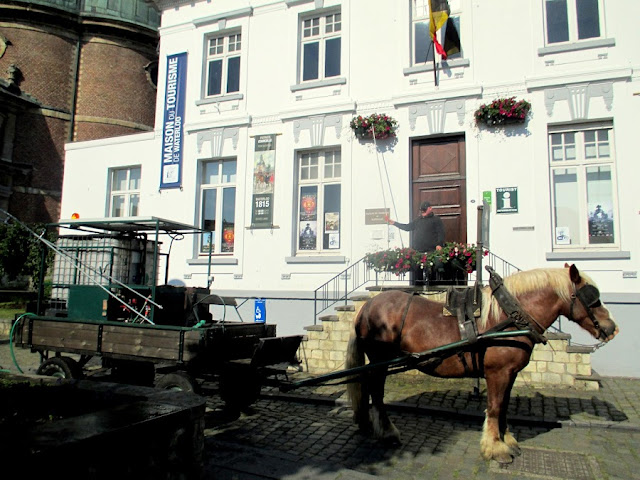 Early morning a man with a horse and carriage filled with a water barrel will make a tour to water the plants hanging on the street lamps. 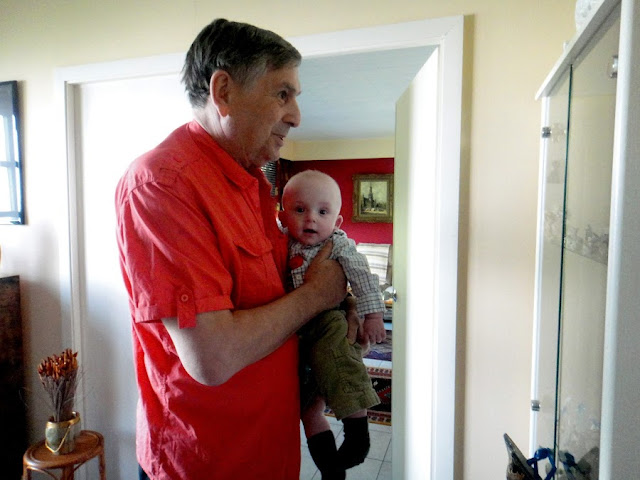 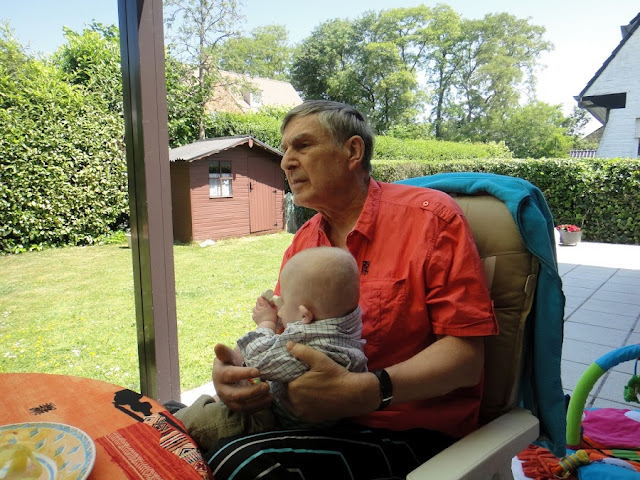 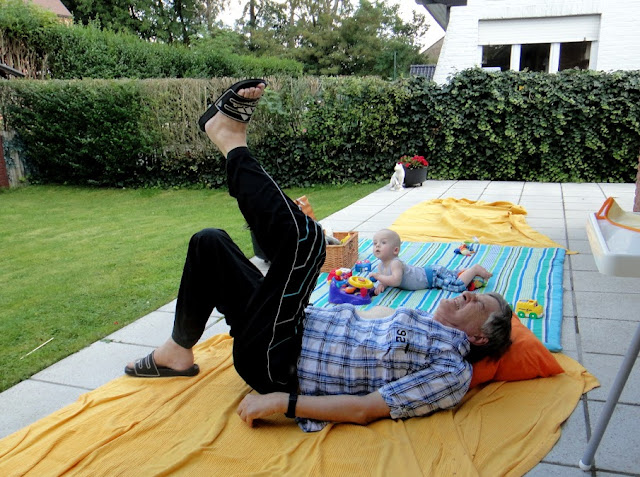 Nonno (Grandpa) looks a bit stiff, when he wants to copy me !  thinks Toby

more participants at AWWW MONDAYS
On Saturday  I woke up and saw the world in black, everything was negative. I hadn't slept very well, I woke up all two hours to the delight of cat Rosie, as her day is the night. As always when I have the blues I go on my terrace, sit down and breath deeply hoping to see the little fox or a squirrel, but they were probably in a bad mood too. 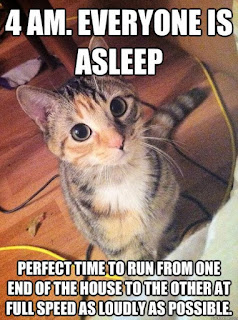 I finally got up at 6 am and waited for Maria, my cleaning lady, who had shortened her holidays in Poland, because she couldn't stand the noise of her little grandchildren anymore, because she had thought she would be alone with her son and that her DIL and kids were at the sea on holidays. But they were also there. She decided to come back one week in advance and have her holidays here, but as we became very close over the years, she came and cleaned the apartment. What an angel !
I wanted to do great things and go out at least or invite my neighbor but at the end I fell asleep while I watched a movie after lunch and then decided to do some shopping and maybe go to the Horse riding Club watching the horse training from their Clubhouse.
It ended that I just made a tour to the Waterloo Lion to see all the tourists on holidays learning about the Battle of Waterloo and climbing up the stairs to the Lion sitting on his mount. 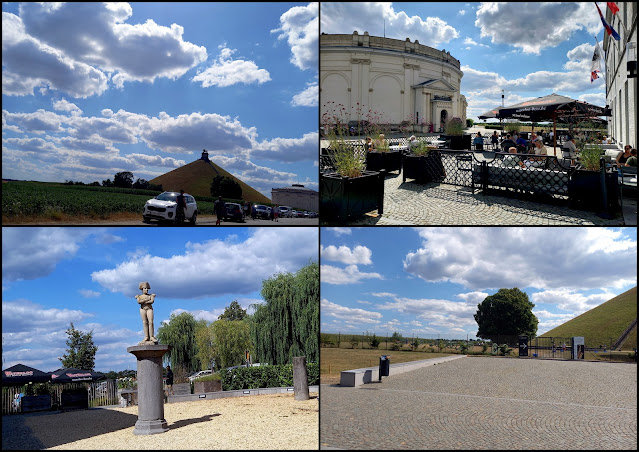 It was depressing, ever since the site had been renovated in 2015 for the bi-centenary of the battle, and they had demolished all restaurants and bars there, there were a few sitting outside the new built restaurant, for a Saturday with such nice weather it would have been crowded in the past. I took some pictures just to get angry and returned home.

Sunday I felt a bit better when I woke up, this time I had slept 5 h in one shot ! Dario called me and we had a nice talk, I emptied a bit my heart, he is still not fully healed from his Covid and feels a bit weak.

Luckily my DIL has nothing and Toby is OK again. Unfortunately they can't come next weekend either. There is the flower carpet again on the Grand'Place, after 3 or 4 years due to the Corona Virus crisis, a pity, it takes only place every two years, but there is nothing you can do about it, I'm going anyway, if I'm not too lazy again. 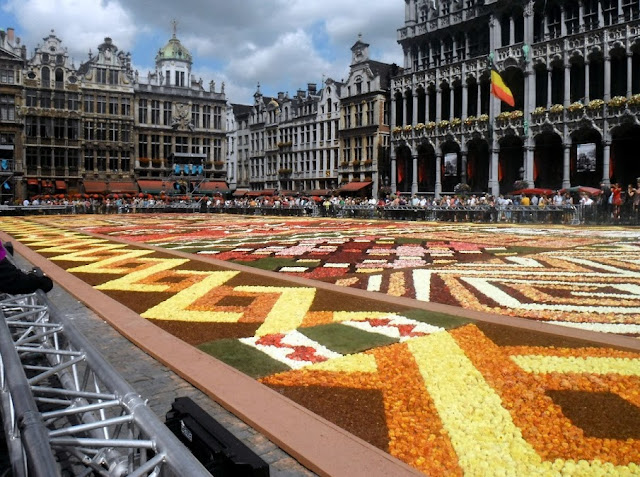 In the afternoon I made myself comfortable on the terrace and surfed the internet a bit. 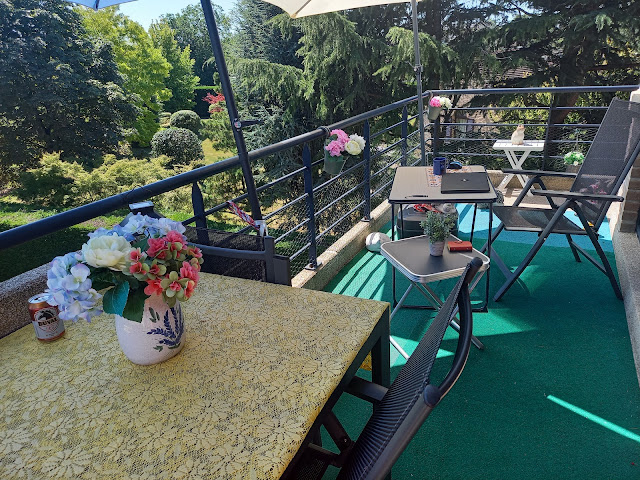 Then came "my daughter" Isabel to try to connect my computer to the printer, which still didn't work.

This time she managed and I could finally print ! I never needed a printer but now with all the administration papers for Rick I really needed one. It's unbelievable on what I have to pay inheritance tax ! Even on my own little Toyota Aygo the half of the worth, and on our house we sold, because it was sold in less than 3 years !!

I start to understand why the children of Princess Margret of the UK had to sell their mother's jewels to pay the inheritancee taxes ! Looks as if it is in all countries the same ! 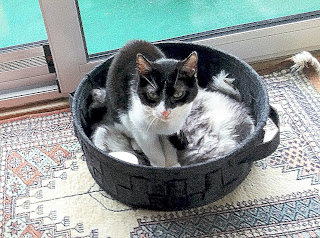 Hope I don't have to pay taxes on half of Rosie !

If you have difficulties to comment, just scroll down to :
Subscribe to: Post Comments (Atom)
click on it and then you can comment !
I have the same on other blogs and it took me quite some time to find out !
Posted by Gattina at 06:00 8 comments: