1. I have a wireless thermometer in my room which shows the outside and inside temperature. As the temperatures in Belgium are like a rollercoaster, it allows me to know if I should dress like going to the Northpole or rather to Africa. I noticed that my outside temperature was missing. I thought the little box for measuring the outside temperature was misplaced by the wind and asked Mr. G. to put it right. But there was no box. He looked everywhere even in places where it was impossible that the wind would have pushed it. The little string with which I had fixed the box was still hanging in the bush. Conclusion, somebody had stolen the box, why, was a mystery to me because with only the box you just can't do nothing. That was the first time in 39 years that something had been stolen from our front yard !

I had to buy a new one. Which I did. Only I didn't pay attention and bought a thermometer with a wire ! Mr. G. unpacked it, put it together and then we were there with the new thermometer and a wire which of course didn't go through the window ! I returned to the shop and asked for an exchange. As the package was slightly damaged they didn't take it back. I asked for a wireless thermometer a simple one, but they only had thermometers with weather station ! Weather station, that's a joke. How can that thing forecast the weather when even the weathermen is unable to do so. When sunshine is announced it rains and the other way around. And to know if it is bad or good weather I have my window, that's cheaper. I told the salesman who laughed and went out without thermometer. Fortunately I had another idea, near the shop was another one who only sells second hand things and there I sold my new thermometer and only lost a few Euros. I returned home, and bought one on Internet which was far cheaper and was exactly as my old thermometer. Until it is delivered, I have to put my nose outside and feel if it's cold or warm, to dress appropriately.

2. I had installed Skype on Nicole's new tablet, but it didn't work. So after shopping I went there to fix it, but lost patience, it was so nice and sunny, that we preferred to sit on her terrace and profit from the last warm sunny days.

3.  I did the same in our garden and read my Kindle book, while Oscar, the lawn mower robot, mowed the lawn, and during the night while I slept peacefully, I baked a bread which was ready in the morning. Modern life is great !

4. Dominique as rather delayed birthday gift (my birthday was in July) offered me to go to a theater play, so I went next door and we choose a play and booked it. I also helped her with sorting out her pictures, even after 6 years that she has her computer, she still hasn't got it how to copy and paste ! After that we sat in her garden and chatted.

5. Although I had reduced our garden to a minimum of work, adapted for a vintage couple, ivy is growing so fast that you can almost watch it ! So with a big sigh I cut ivy wherever it was hanging over. 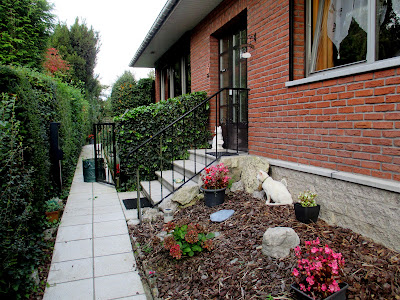 Cat Arthur did the supervisor. At least now it's done hopefully for the last time this winter ! 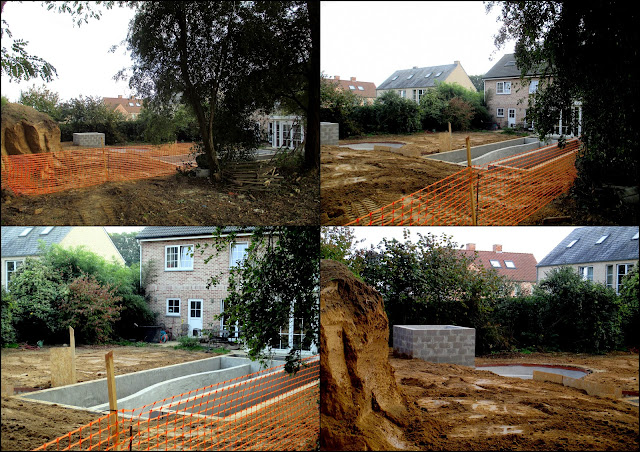 One neighbor who moved into our street not so long ago and whom we don't know (yet) has an ecological swimming pool built in his handkerchief sized garden. Now there is hardly room to sit in there. When I first saw this thing I thought it was a bunker against atomic bombs ! Other neighbors arrived too and we discussed how to swim in this pool. It's just large enough for a walk in the water. Maybe when it's finished, he will invite us all for a walk through his ecological swimming pool !

HOW TO INVENT NEW TAXES ?

Inventing new taxes to fill in the big hole in the government's accounts, makes all treasury secretaries of the world very happy. If in normal life they are quite boring and unimaginative and usually not creative at all, when it comes to invent taxes, they suddenly develop an extraordinary fantasy ! With hungry eyes and pointed ears they look everywhere where they could get some more taxes to collect !

I suppose it's in every country the same, and in this one our treasury secretary, hasn't slept either ! After taxes on house, ground, car, bikes and motorbikes, heritage, income, pensions and fortune (yes even that, it's better you remain poor !) he now saw his chance in air pollution, world warm ups, smog and ozone.

He happily rubbed his hands and his heart was full of joy ! What kind of taxes could he create to also profit from our sick globe ? The garbage ! Yes ! that's a good idea but how ? He thought it over and over and then had the idea of his life ! Just banning the heavy metal garbage bins and only allow special colored plastic bags. The garbage men also would be happy (and then vote for him) because it's less heavy to carry. But what color ? He looked to the sky and choose light blue for cans and plastic bottles.

He looked at the white (short) skirt of his secretary and choose white for household trash. Of course you have to buy these bags in the city hall and if ever you put another "ordinary" plastic bag on the street, it is not taken or you even can get a fine.

But what to do then with paper and cartons ? So he added a little tax on the house tax and allowed the garbage men to pick them up twice per month. To make the tax again a little bigger, he also added a little bit for street cleaning.

He racked his brain and hurrah ! he found something else ! Pollution caused by cars and trucks ! Little more taxes to pay on the trucks and some more fine to pay for car owners if they don't respect the speed limit when there is smog.

Finally he thought, it's not so bad. With the VAT (value added tax) on all bills and invoices there is also some money coming in. And then last but not least, as it is so warm already why not invent a tax on barbecues ? It pollutes the air too ! To watch over all the culprits who make a barbecue in their gardens he would create a special police unit who should overfly the gardens by helicopter and send a special agent to this house to collect a barbecue tax.

But there was a problem. Sausages do more smoke then steaks, and pork and beef is also different so what to do ? Easy ! For sausages it will be 40 € and for steaks 30 € tax on barbecue, payable immediately. For pork he is not sure yet, he first has to try it out himself when he makes his next barbecue !

The last tax invention was reported to the population in the news as an April fools joke. It created hot phone lines, overcharged internet and almost riots !

The abattoir of Brussels Anderlecht, is an outstanding example of industrial architecture of the 19th century. 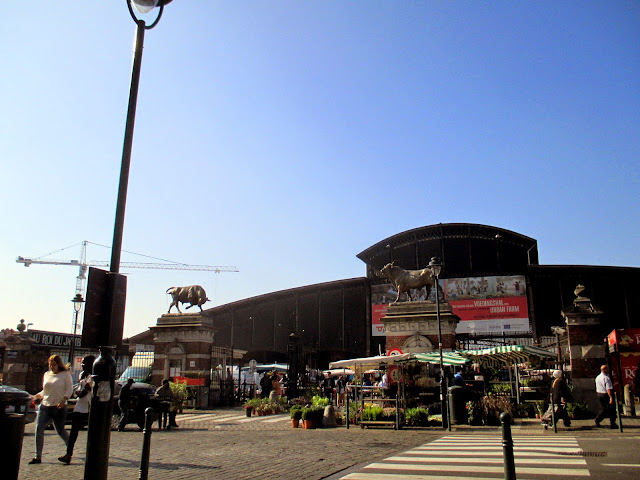 MY WEEKEND OF SEPTEMBER 27

Although it's a little cool in the mornings, it seems that summer has come back !

A nice opportunity to return to the Abattoir market in Brussels, this time with Nicole who had never seen this market as it was the abattoir of Brussels before, and of course that's not really a place you want to see ! We walked around bought fruits and Nicole found a case for her Asus tablet, perfectly fitting for less than half price she would have paid in a shop. I found finally a purse for winter, I had looked already for a long time, but all purses looked so dull, or were too small or too big, but here when I had no intention to buy a purse I found the right one. 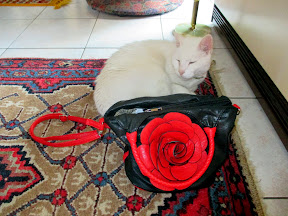 I love it, everything I need fits in it ! Arthur seems rather bored. But as a white background he is OK.

After our walk we were hungry and as there are lots of restaurants or snacks in the market, we had a nice lunch.

Before we sat down we picked up Charlie whom we had left in my car to protect it (you never know). Nobody can approach the car he becomes ferocious ! He put his head on my lap, waiting for some pieces of meat and was delighted that our portions were too big for us so that he could clean up the plates just like a dishwasher !

A friend of my painting class has put her house on sale and to get rid of a lot of useless stuff, she did a Garage sale. 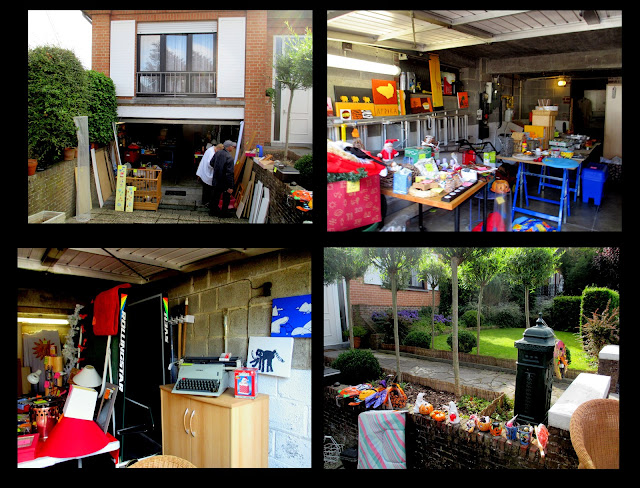 Of course I went there not to buy something, we have enough useless stuff ourselves, but just to say hello. There were others too and we sat on the street and she served a glass of Rosé. We had a lot of fun and she also sold several items. I finally bought a seat, which when you unfold it becomes a bed. This can always be useful when you have guests overnight.

On Sunday morning we had a chat with grandson Toby who enjoyed his breakfast. Skype is really great when you have family living far away from you.

Maybe for the last time I could sit outside in the garden, it was summery warm. Fortunately we hadn't put away yet the garden furniture for the winter  !
Posted by Gattina at 06:30 7 comments: