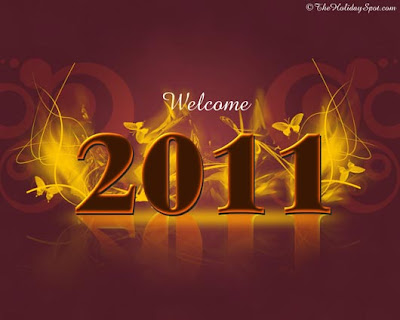 Today is the first day of the new Year at least in my part of the world. Some others are still waiting for midnight or they have the first day already behind them.

For a long time I believed that the whole world celebrated at the same time, i.e when it was midnight in my country. I realized that it wasn't quiet true when I got a phone call from Australia in the morning wishing me a happy New Year ! They were zipping their champagne and I was sipping my morning coffee. 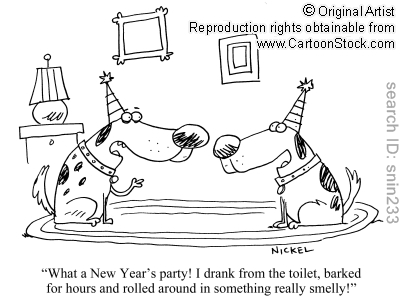 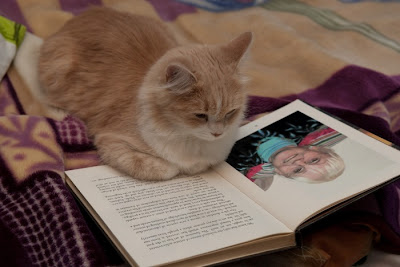 I hope you all had a nice New Year's Eve !

I swear it's not like that I was feeling yesterday night !
Posted by Gattina at 06:00 9 comments:

1. Since we came back from Amsterdam where we had celebrated Christmas, it had started to snow again and for 3 days we were litterally prisonners of our house ! 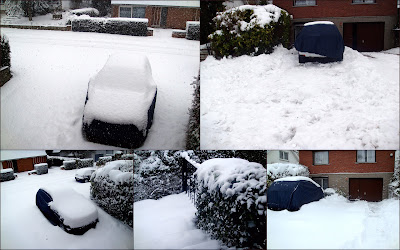 On TV they only talked about the snow, the chaos at the airport, people without electricity and of course car accidents just like in an action movie where it is normal that cars fly through the air and turn around. Car insurances suffer nightmares !

3. Dominique was able to get her car out of the snow and did the shopping for us and my other neighbor. She delivered everything and we took the opportunity to have a cup of tea together and I showed her our Christmas pictures.

4. Vivi my 72 years old other neighbor had needed cigarettes, which I have to keep, because officially she has stopped smoking because her 92 year old boyfriend doesn't allow that she smokes. So she came at 9 am to pick up her cigarettes and we had a cup of coffee together and chatted about Christmas etc until finally she left us at 11 and now we know everything what is going on in our street ! Fortunately nobody died, but the neighbor's son has finally found a girlfriend and left his parents after 29 years of commun life. I hope for them that he won't come back.

5. The rest of my time I spent with snow shuffling, sorting out my pictures, answering Christmas and New Year wishes and watched some crime stories on TV and of course with blogging. 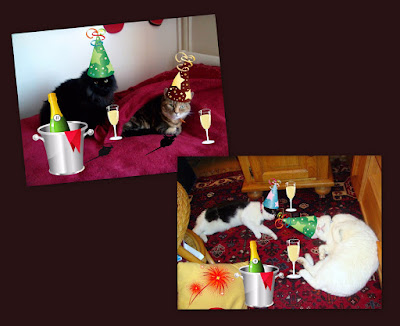 A LINK INTO THE NEW YEAR

Our letter topic for this week is to make a "New Year linky".

Therefore I make a linky from 2010 to 2011, which in any case I can't avoid as worldwide the year will change as we all use the Gregorian calendar. If I would use the Hebrew calender I would be now in the year of 5700 and something, which makes me older while the Islamic year is now in 1400 and something. Honnestly I am too lazy to calculate my age and keep the one I have in my passport.

Since I started blogging I heard for the first time that people make "New Year's resolutions". Not used to this costum I had looked in Wikipedia which always helps me to get more and more instructed and wiser. Soon you can call me Wikipedia II. So I learned that :

"A New Year's resolution "is a commitment that an individual makes to a project or the reforming of a habit, often a lifestyle change that is generally interpreted as advantageous. The name comes from the fact that these commitments normally go into effect on New Year's Day."

The problem with me is, I don't know what kind of resolutions I could make ! I don't want to reform my habits or my lifestyle, I had 50 years of time to do that.

The things I should improve are :

Improve health: loose weight, exercise more, eat better, drink less alcohol, quit smoking.
Fortunately I have no health or weight problems, I don't drink alcohol, I eat nothing greasy, and I pretend that I don't smoke.

Improve finances: get out of debt, save money. I never had debts and am happy with my finances.

Improve career: get a better job. I now got the best job ever, I am retired !

Improve education: improve grades, get a better education, learn something new (such as a foreign language or music) Nothing to improve (besides learning Wikipedia by heart) not even learning languages I think 4 are enough and music I don't want to learn but listen.

Take a trip, to where or with what ? My travel planning is full

The only thing which will change my life is the fact that I became a grandma for the first time in November, but for that I don't have to make any resolutions ! 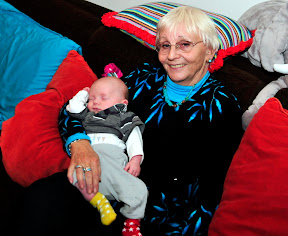 In fact this is a new job ! 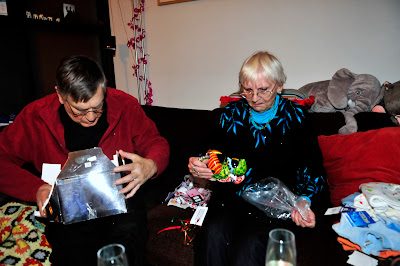 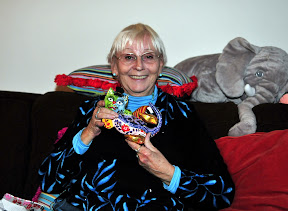 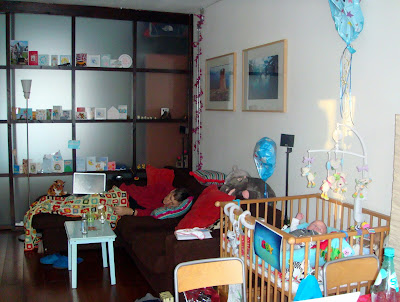 My world hasn't changed since last week, in fact it became even worse ! 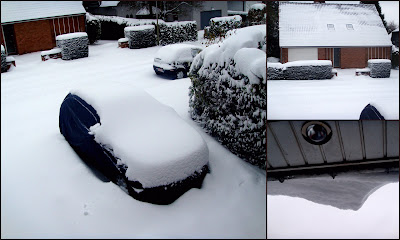 This was the view out of my room on Friday the 24th ! Even an ice block covered with snow hanging over the garage. We could have made a bet of who goes out first and be killed first ! 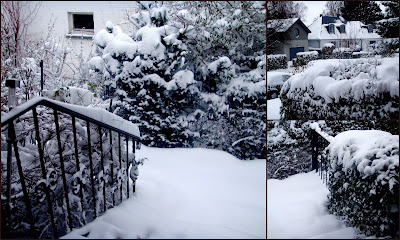 We had no steps anymore leading to the housedoor 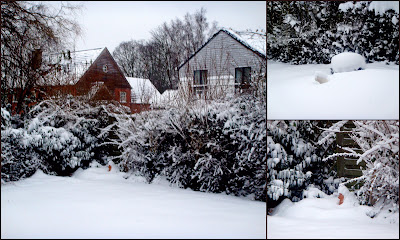 and my little animal cimetary in the corner of our garden was also almost invisible. There weren't even paw prints from our cats. 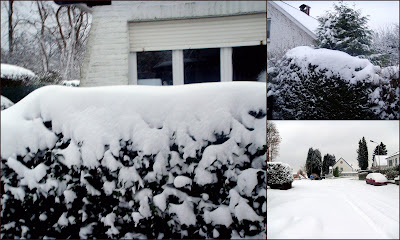 I couldn't look into the kitchen of my neighbor Domi to see what she was cooking, and the other neighbor had also disappeared in the snow. Our street looked as a village in Alaska only the houses looked different. 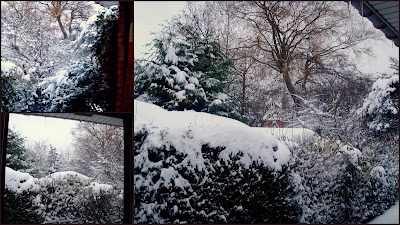 Although the view out of our living room window was quiet romantic, we were rather nervous because we had to go to Amsterdam which is about 220 km from Waterloo. 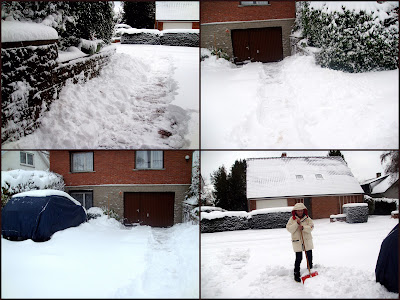 After digging out our Garage door and making a little way to get the car out, we managed to get on the street and could drive without major problem to Amsterdam and celebrate Christmas. See post below.
Posted by Gattina at 03:00 7 comments:

Helps you to remember what you have done on the weekend of December 24. You never know if you need an alibi ! If you participate please put the little logo on the top of your post and leave your link.

When on the 24th I looked out of the window, I thought we would never be able to drive the 220 km to Amsterdam to celebrate Christmas with our son and family.

We were litterally burried in snow. I couldn't even open the garage door. With a snow shuffle which dated from Matusalem (I don't even remember when we bought it) 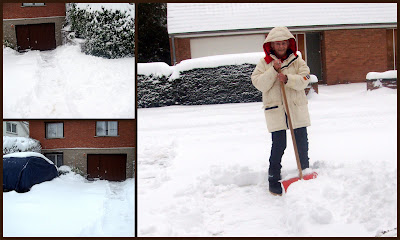 I managed to shuffle enough to get out of the garage with my car. Mr. G's was sitting deeply in the snow. We had to put a kind of socks around the front wheels not to slip and slide on the frozen snow. The city confronted with such a new problem hadn't thought about buying enough salt and didn't have snowblowers. It was a real adventure. Fortunately the highways were clean and there was no problem and finally we arrived just a little later as foreseen in Amsterdam in our hotel.

This time we had to sleep in a hotel because with the new baby, there was no spare room left for guest. 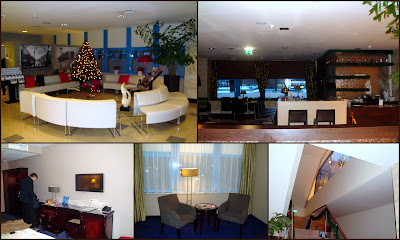 But we were very happy with the Hotel I had found, it was the Best Western and had a nice view on the canals and what is very important in Amsterdam it also had a garage, as parking on the street is very expensive even in front of your own house !

Then we drove to our sons flat and started our Christmas celebration ! 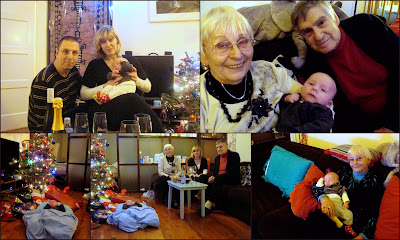 First thing we noticed of course was that little Toby had changed and had become a big boy ! He is now a little more than a months. Above you see the young and old couple with little Toby and then he acted as little Jesus in front of the Christmas tree. 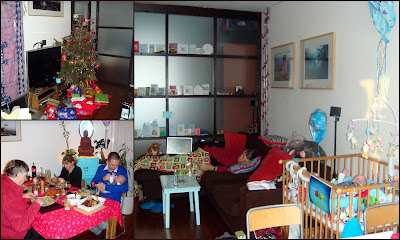 We had a raclette on Christmas Eve and on Christmas day a delicious turkey with couscous and broccolis gratiné. Nonno (Grandpa) Mr. G and Grandson Toby both full had a little nap together. 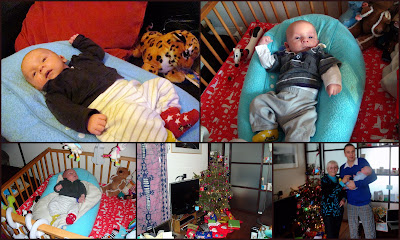 and here he is admiring his toys with music and was also very intrigued by my glasses. 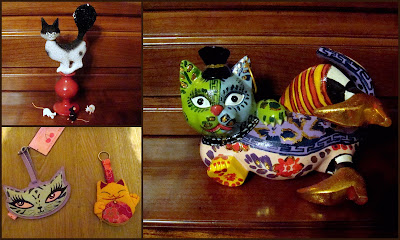 Last but not least, here are a few of my Christmas presents and .... of course I was spoiled with cats !

We haven't been in the center of Amsterdam at all, it was so cold and the sidewalks were also a little slippery. It will be for the next time. 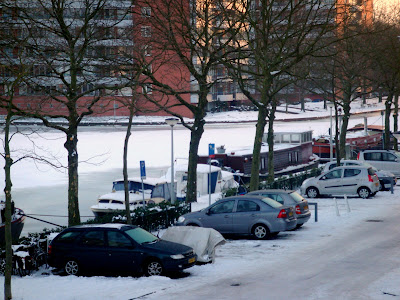 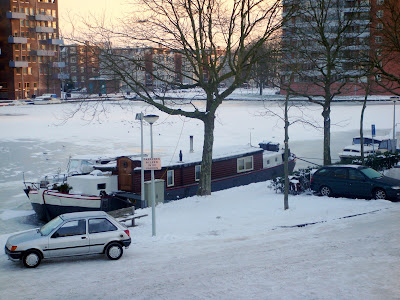 The ships were frozen in the canals, as I could see out of our hotel room.

Sunday we drove home on a cleaned highway and arrived again in our messy Waterloo, where the cars were stuck and burried in the snow. We pushed a big sigh of relief when we managed to drive in the garage without damaging anything !

We watched a film on TV and recuperated from celebrating and eating and were not hungry at all ! Christmas definitively is not made for people on diet !

Labels: What did you do this weekend ? Christmas celebration 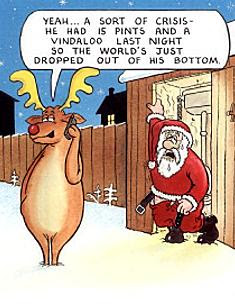 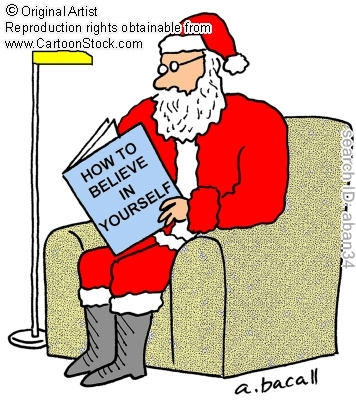