1. The week started with aqua gym, and we felt our muscles ! It made also hungry so Dominique and I returned to the restaurant where we had been last week for another plate of mussels ! It was delicious.

2. Probably for the last time this year I put Oscar the lawn mower robot on the grass and he turned around in circles ! The grass had grown rather high and was still a little wet so he had a lot to do ! And while he was working I prepared my posts for the next day.

3. We still have very sunny weather although it is very cold in the mornings around 7°C and then in the afternoon more than the double. I did some garden work, so I hope now its finished, except I have to take out the plants from the pots once they have all faded !

4. It was already a long time that I wanted to visit Pairi Daiza a privately owned 55-hectare (140-acre) zoo and botanical garden. 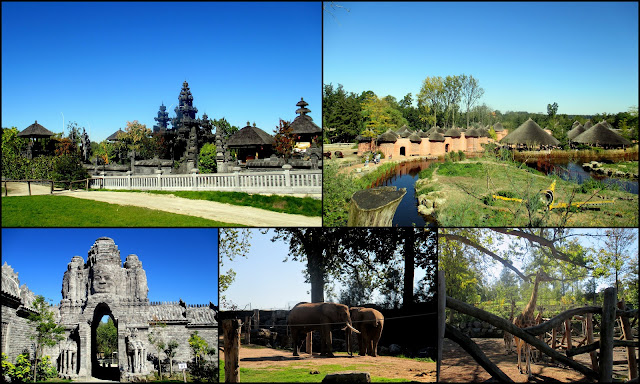 Ilona and I walked from India to Africa to China and Europe and admired the beautiful buildings, tropical gardens, plants and semi precious stones. For animals it is a real paradise as the the enclosures are so huge that sometimes we couldn't even see the animal. The well being of these animals comes first and the visitors only in the second place. But different cafés, restaurants, tea rooms and snacks could comfort them and goats and ducks were asking for food ! One duck pinched me in my leg because I didn't want to feed it with a chips ! I will write a separate post about this amazing place !

5. Next weekend is the "parcours des artistes" (the path of artists) in Waterloo. There are 128 participants. Our group is also part of this exhibition which leads to different houses, exposition rooms, and shops all over Waterloo. 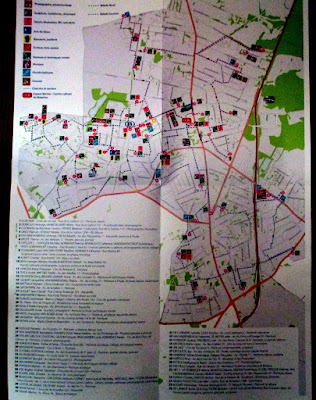 It's quite a long way to visit them all !

To prepare our exhibition room we all brought our paintings which we wanted to expose and put them on the panels. 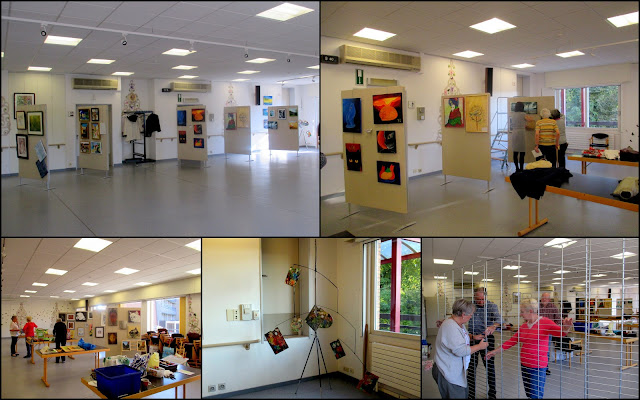 It was a lot of work but also a lot of fun ! By noon we had finished !  My panel shows the colorful cats of course !

Over the weekend we will be very busy and hope that we have a lot of visitors and of course also buyers !

As usual we were watching the news on TV, when suddenly I thought it was an April's fool joke, a little too early or a little too late !

What I saw was the benediction of tablets, smart and other phones in a church in a little town near Namur. The priest was blessing the devices which people hold up sitting on their benches in the church.

Then the priest walked through the rows and sprinkled the tablets etc with holy water ! Apparently the water didn't do any damage because nobody complained.

The priest was proud of his idea, that's what he told to the reporter, because he never had so many people in the church ! He said that the church should go with the time and be modernized. I agree, but they should start with more important things then tablets ! At least the normally empty church was full and it wouldn't surprise me if other priests would follow this idea ! Belgium is a catholic country, but there are less and less people going to church.

The journalist ended his reportage with the words : The holy virgin Maria will not appear anymore in a grotto but on tablets now ! So please pay attention ! 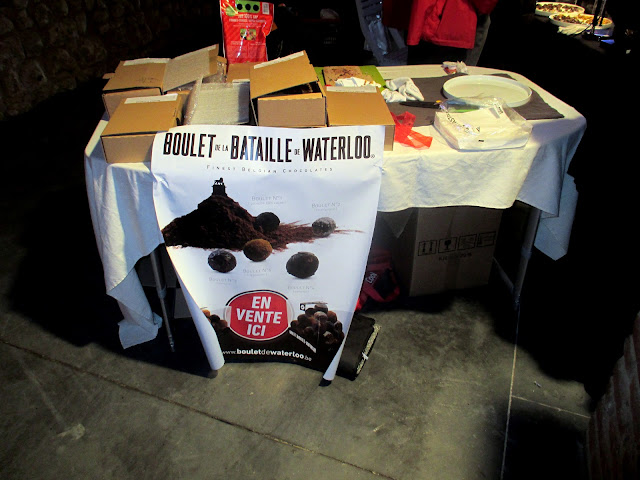 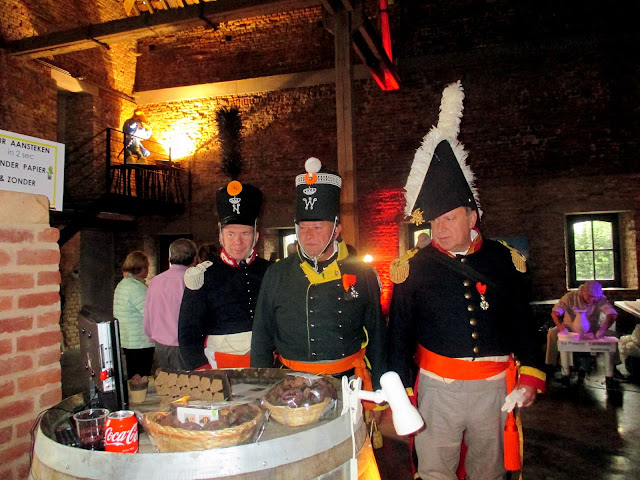 Each year at the same time a pumpkin festival is organized by a local farmer on his grounds and fields. It is always very cheerful and for all ages. The weather was also beautiful and warm. 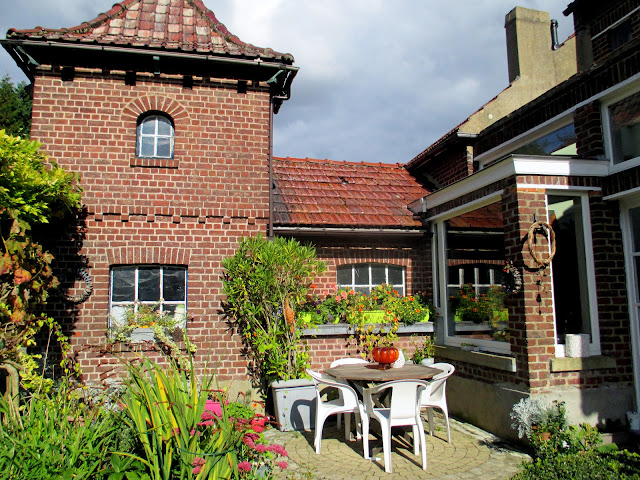 The back of the farm house 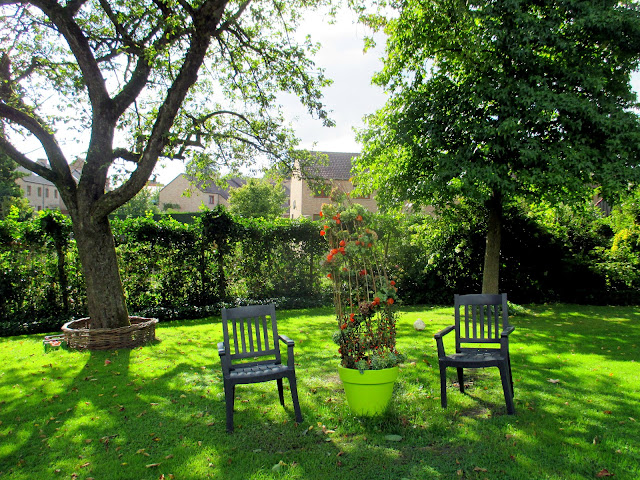 A part of the garden 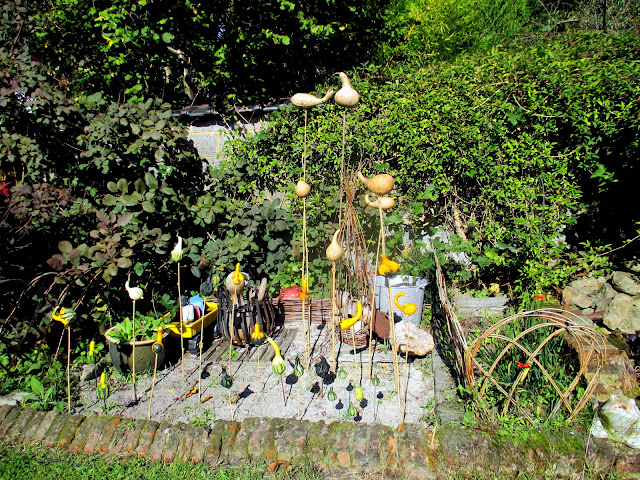 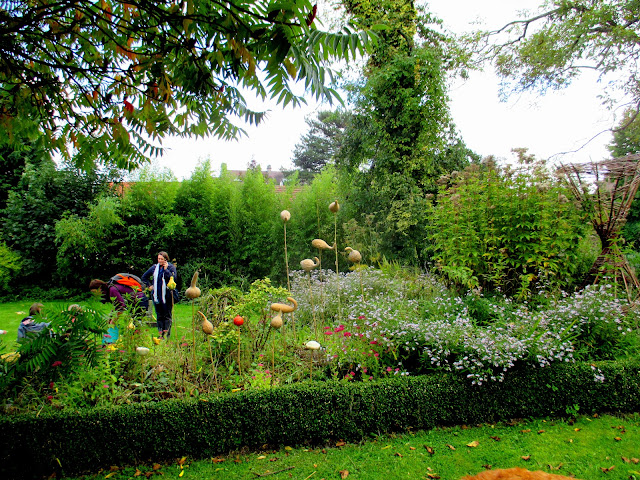 and very original decorations all around 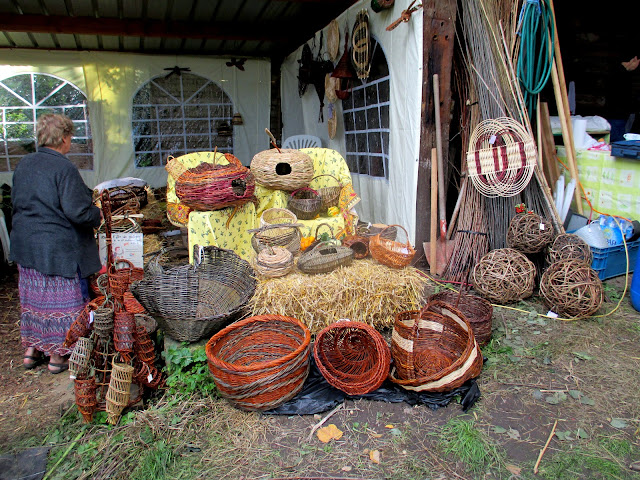 There were baskets for sale, but also all kind of food made out of pumpkins ! Besides the classical pumpkin soup, there were jellies and jams, cakes, cheese and even pumpkin chips ! I never thought that you could do such a lot of sweet or salty plates with pumpkins ! 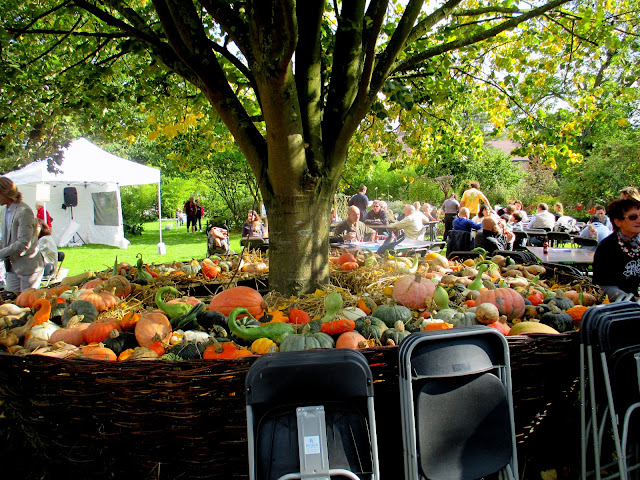 a huge basket around a tree 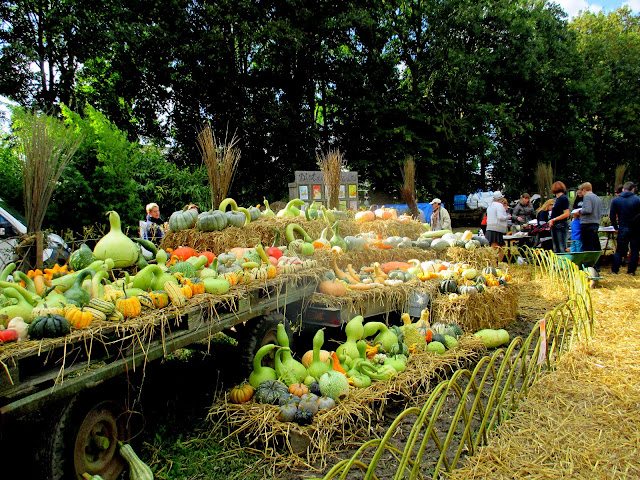 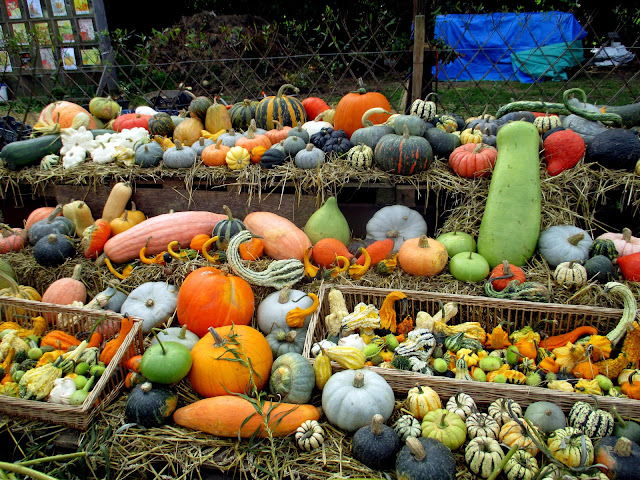 and all varieties of pumpkins ! 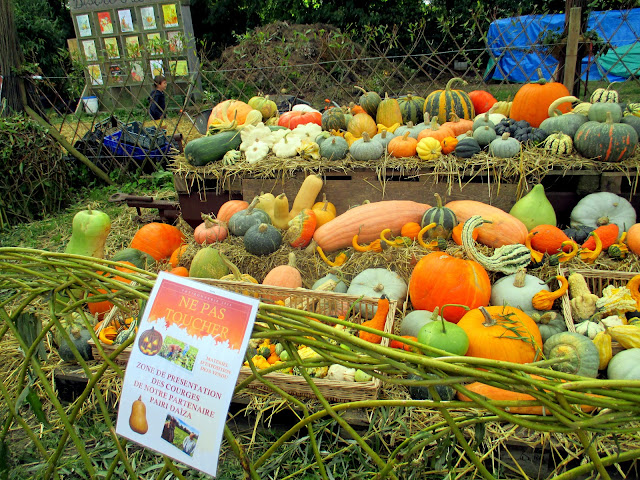 These presentations were created for the very huge animal park Pairi Daiza, which houses for the moment two pandas and white tigers. The pumpkins will decorate the park entrance and later they are fed to elephants. Apparently they love them. 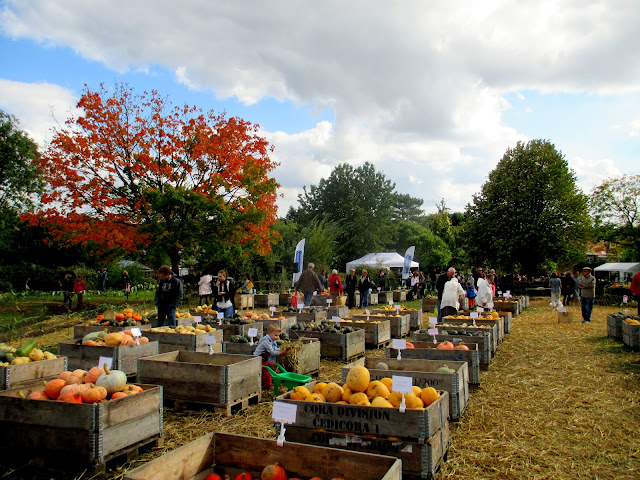 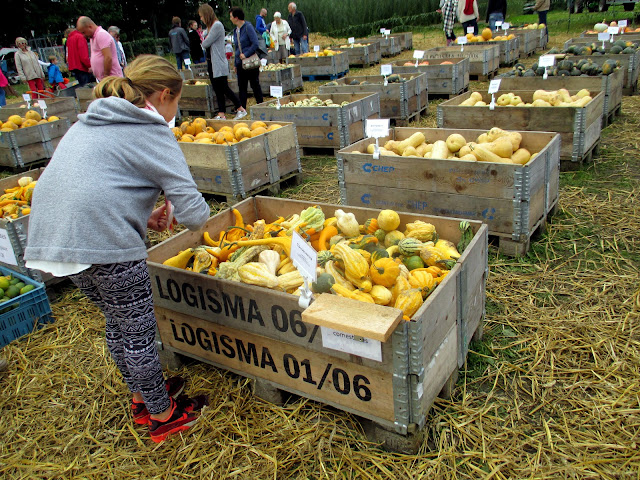 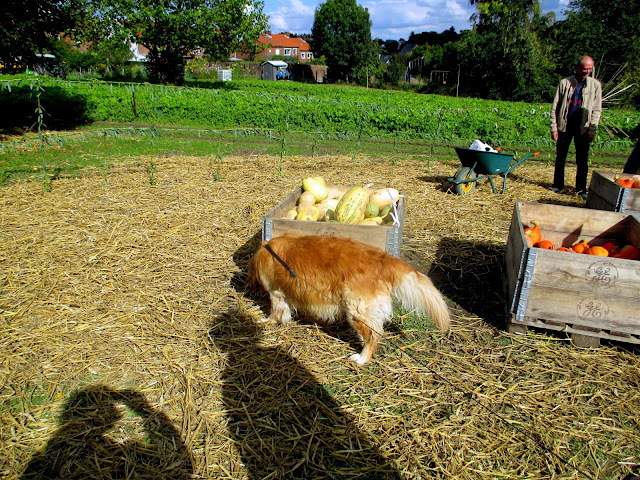 Charlie was delighted about the smell of the straw 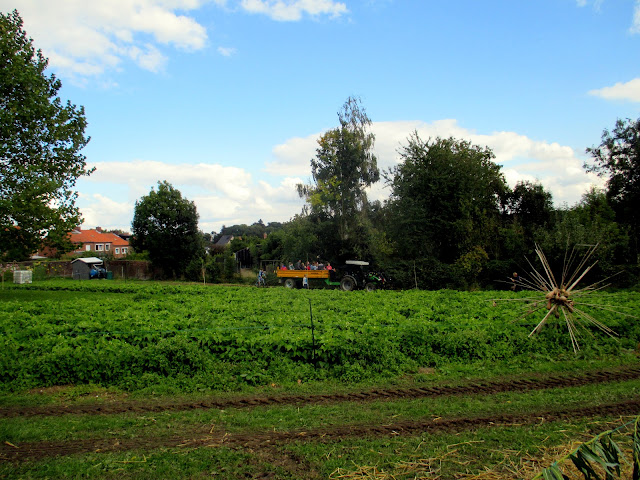 The farmer had loaded kids on his tractor and drove them around the fields. 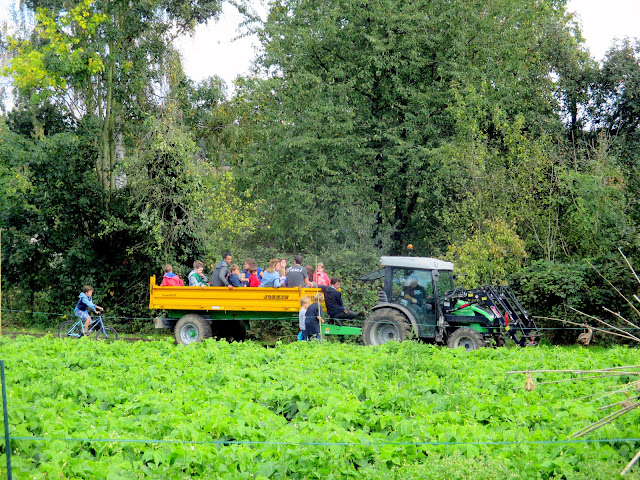 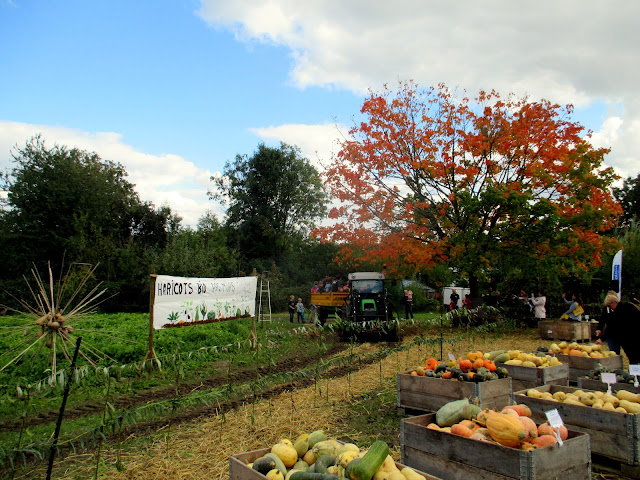 We should have done that too ! 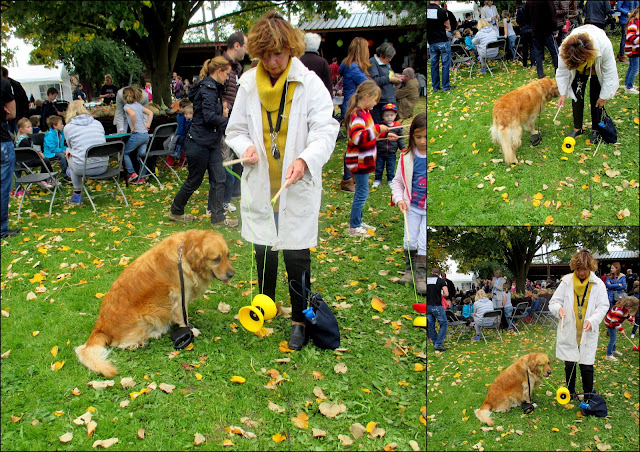 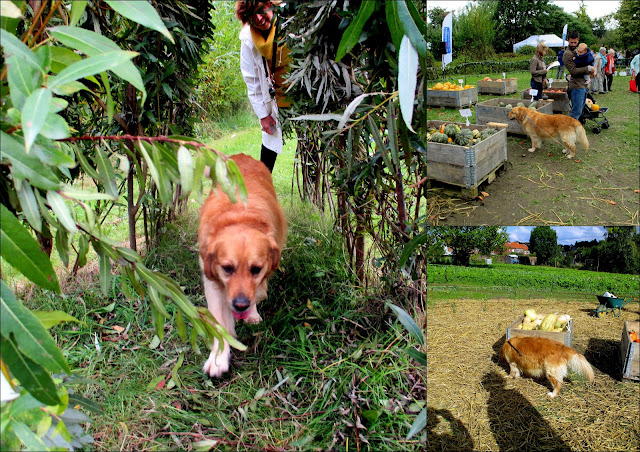 He preferred to go through tunnels and sniff at the pumpkins.

Before we returned home we tried out some of the pumpkin specialities but didn't buy anything.

Ever since we started autumn I have to go out and distract myself, otherwise the ceiling would fall on my head and everything becomes black.

The Waterloo city had organized a walk through the city to explain the old buildings which are still there since the 18th century. We should walk from building to building and listen to the explanations. It turned out that the two more than vintage guys explained with the help of an old map, buildings which didn't exist anymore. It was freezing cold and we stood there and listened but we couldn't understand a word, the guy had not enough strength in his voice to be audible in the last range. 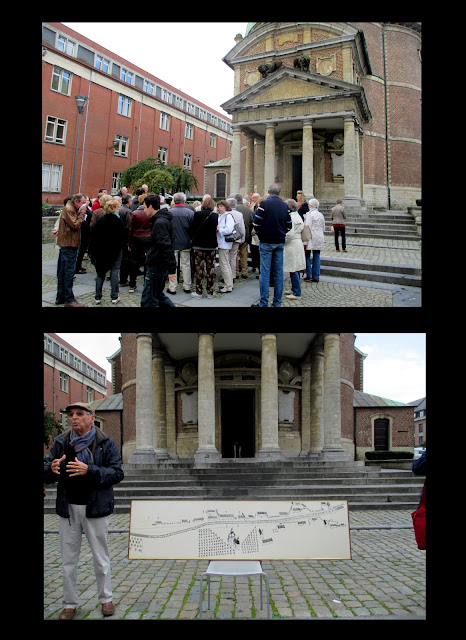 After 45 min of listening what didn't exist anymore and still standing there, I thought I can read that on Internet too and be in a warm room. Nicole who was with me thought the same so we left the group and had a coffee instead. An hour later we saw the group just leaving for the walk, they all looked a little deepfreezed and like a group of Jehova witnesses.

In the afternoon the sun was shining and it was warm too. In the next little town was a pumpkin festival organized by a farmer who does this every year. 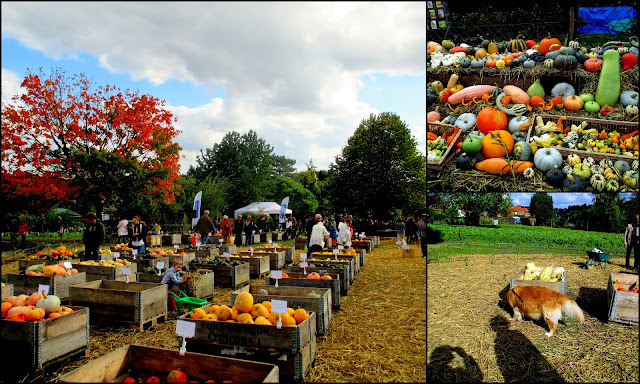 The whole garden was decorated so beautiful, you could buy pumpkins, or taste all different things made out of pumpkins. I even had a pumpkin chips ! Charlie was happy and couldn't get enough from the hey and straw smell much to the fun of the people he was rolling around happily. We had a coffee there and were chatting with other people and spend a very cheerful afternoon.

On Sunday was a show with Napoleon's soldiers, horses, canons and of course all in historical costumes from 1815. Nicole and I thought it would be fun to see and we went to the Waterloo Lion to watch the show. We had just arrived when we heard a loud boom, which was a canon shot. Poor Charlie who is very much afraid of everything which reminds a thunderstorm panicked and ran off pulling Nicole behind him who nearly fell on her nose ! Impossible to stay, Charlie shook like a leave in the wind and we had to put him in the car. We didn't want to leave him alone so we decided to go to the nearby Mont St. Jean farm and sit down there on the terrace. 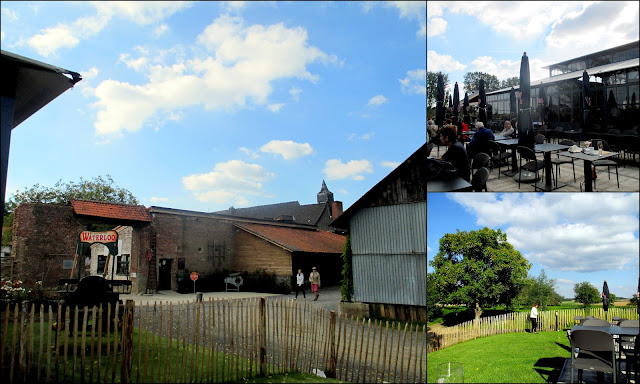 There were lots of people who had the same idea and we enjoyed the green fields around and Nicole had a "Waterloo" beer. 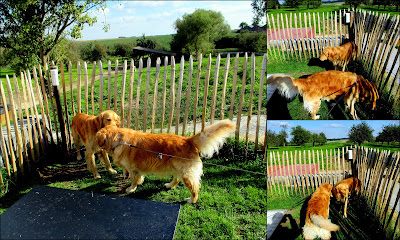 Charlie had recovered from his shock and even found a girlfriend. 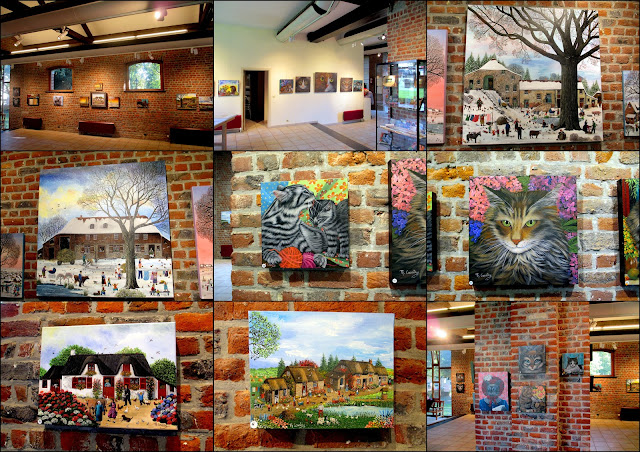 On the way back I stopped at the exhibition of a local female painter who paints cats and naive landscapes. I very much liked her work and we chatted a bit together.

Tomorrow starts another week !
Posted by Gattina at 06:30 7 comments: