1. As usual I take care of the neighbor's cat when they are gone on holidays. Unfortunately this time the cat was sick and had to take medication. That is normally no problem only that the cat didn't eat !

In the middle of my Christmas preparations came the worries about the cat.

2. After three days he hadn't eaten, I decided to call his vet and he asked me to come over. 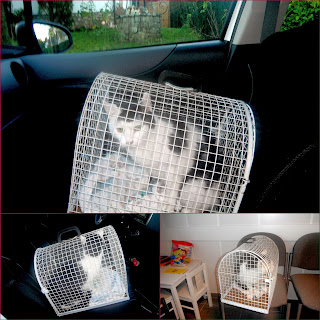 What I did. The cat was very good, didn't protest when I put her in the carrier and then she got two antibiotic shots. The afternoon I had some last shopping to do and at the exit there were 21 people before me and two cashiers open ! On top of that the whole bank card system in Belgium had broken down and people had to leave their shopping because they didn't have enough cash ! A real mess which we could see in the evening in the News. I had a lucky hand when I payed with my card it suddenly worked, somebody told me that I had a fairy hand and was applauded because now they all could pay with their cards. To my knowledge I am not a fairy godmother, so it must have been pure coincidence.

3. Unfortunately my DIL had to work on the 24th so that they arrived quiet late from Amsterdam for the Christmas Eve supper. 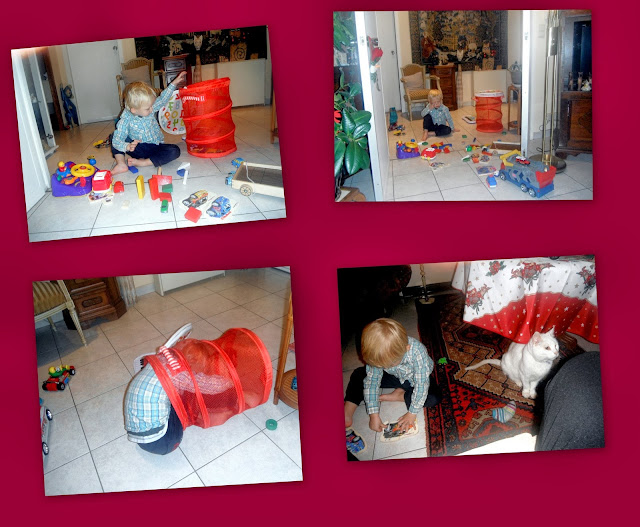 Grandson Toby discovered immediately his toys which I keep for him and started to play. Then we had our Christmas Eve meal, a Pierrade 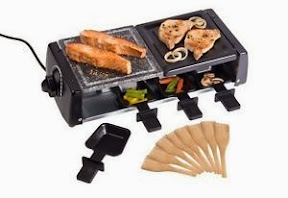 A very easy plate to prepare because everybody does the cooking himself, on the top you roast different kinds of meat and underneath you can melt cheese. It's served with baked potatoes and vegetables. 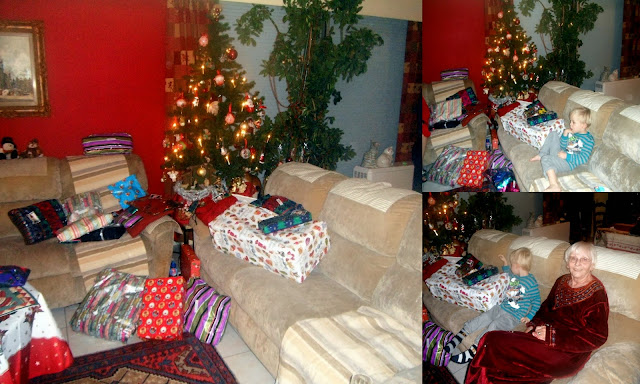 When Toby was in bed we put all the gifts under the Christmas tree and the next morning at 8 am we gathered half asleep around the tree, we even had to wake up Mr. G. He didn't like to celebrate on Christmas day early morning, he was always used to open the gifts on Christmas Eve when we are a little more fresh. It didn't bother me, but honestly I agreed with him. Toby didn't seem to be very interested in all the packages either but then he started to look and was in charge to give the gifts to everybody. I had put little photos of us on the packets so it was easy for him but he also could read his name ! 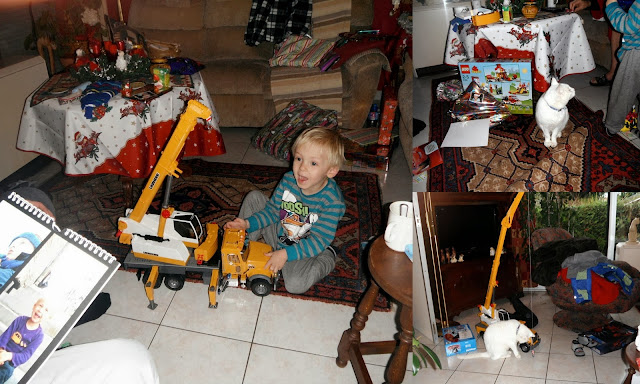 Once everything unpacked he was happy and played with his new gifts, our cat Arthur helped him. He is the only cat who loves little children. The others were hiding ! 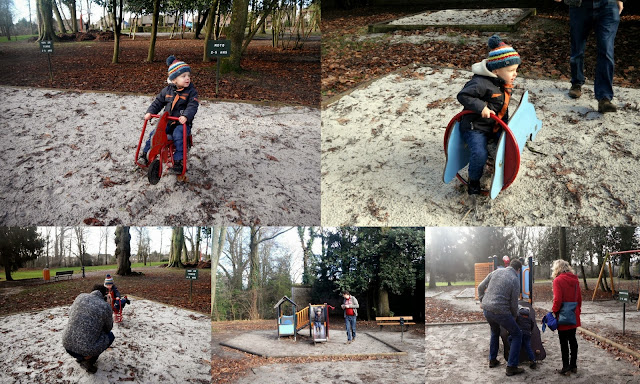 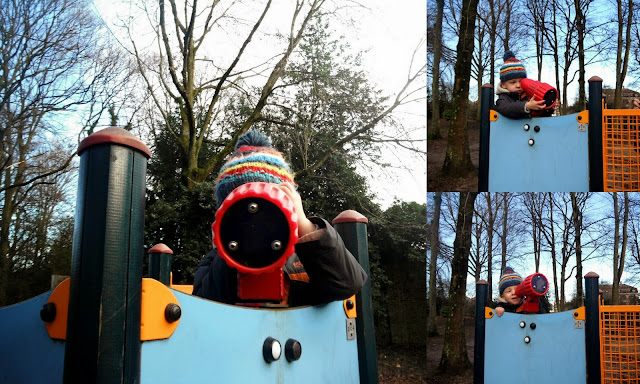 As the weather was quiet nice we did a little walk through the Waterloo park and Toby had a lot of fun on the children's playground. 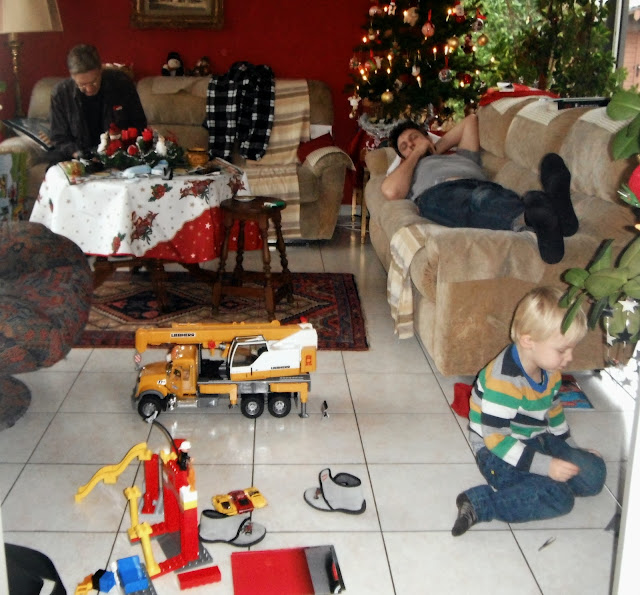 After a brunch the men looked very "fresh", except Toby who refused his afternoon nap and played ! 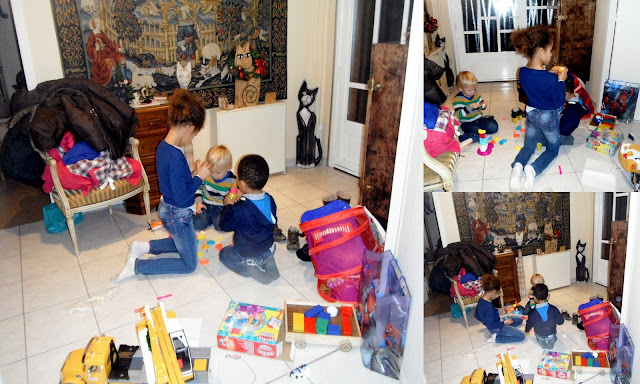 Late afternoon a friend of our son came with his wife and the two kids and they played while we were chatting. That was a real nice afternoon.

The Christmas meal, as starter scallops, was less cozy. Toby was very tired and was not hungry. So between the starter and the meal a roasted Guinea hen with vegetables he had his bath from which he didn't want to get out and got very angry.

We ate the main meal, when he was finally in bed. Then we too were quiet tired and we finished the evening talking a bit and then went to bed too. 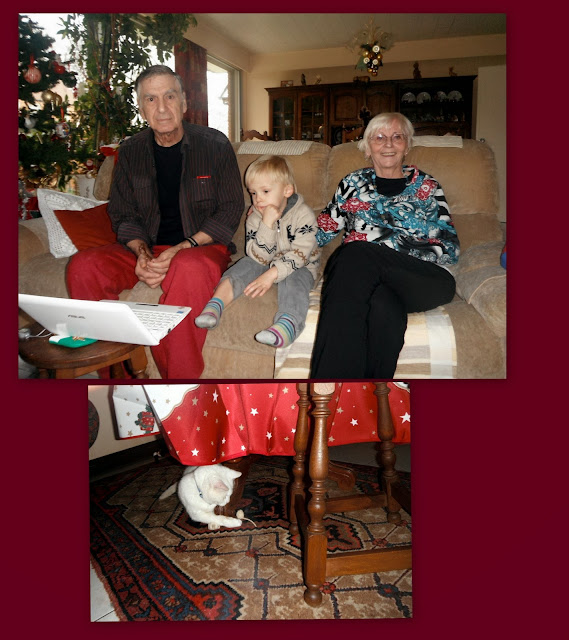 The next morning before they returned to Amsterdam my son made this picture of us while Toby was watching "The smurfs", and Arthur played with a mouse.

Late afternoon I went over to Dominique who was happy to see me and report what a wonderful Christmas she had for he first time since her divorce and then the death of ex-husband, her 93 old mother, the youngest son with girlfriend and her eldest son with the three little once (5,2 and 1 1/2) came on Christmas Eve. And while they had a glass of champagne the little once stormed on the gifts. She said  it was the best Christmas she ever had since a very long time. I reported her mine, and she knew how hardly I had tried to make out the best of this for both of us new way of Christmas celebrations and she laughed when she saw the pictures of us hanging around the tree so early in the morning, fresh like roses ! Toby with his old age of three didn't anyway understand a single thing and was happy, and finally that was the most important. Mr. G. was completely "out of work" and collapsed on the sofa when they were gone. Ilona had no problem with her children, they are more Flemish then Waloons and had more celebrated St. Nicolas. Christmas they don't celebrate although she had brought them up celebrating Christmas. She went to her sister with her mother and rest of the Waloon family. I remembered my childhood Christmas and also the Christmases with my little son, and was a little nostalgic.

We are probably all sitting in the same bath, at least in our Western world. Believers and disbelievers, we all celebrate Christmas and business is business the shops are the first once to show us the festive days. We run around in circles to buy Christmas gifts, although now we have the possibility to stay with our bottom fixed on the chair and buy on Internet. The only thing we have to do is to check the mailbox or the mailman (but not literally) to pay attention that the parcel doesn't get into the wrong hands.

Then the majority of women start to compose menus, to count the heads they have to feet, then they whirl around in the kitchen to prepare all special plates. Sometimes in couples there are disagreements, because mother 1 had always prepared a turkey while mother 2 had always prepared a duck, or a special fish and as we all keep to our traditions we have to compromise.

In the past at least we had no family problems. There were parents and kids. Today with patchwork families, there are several parents and several kids and everybody wants to celebrate on Christmas day, which becomes a brain raking problem for the now grown up kids, where to celebrate, with mother first and her new husband or companion or with father and his new wife or girlfriend. The children are pulled in all directions and have to celebrate several Christmases in two or three days, in advance or nearly in the new year. Difficult to keep up with traditions. But as it is with all in life we adapt to the new way of life.

What hasn't changed is the Christmas tree, the ornaments or decorations, everybody wants to have a tree. It sits there in a corner in each family and listens to the fights, disagreements, cries or happy moments. The only really happy once are little children. They appreciate to have so many Christmases to celebrate and therefore get far more gifts then in a so said "normal" family, which is only composed of a couple and two couples of grandparents.

It even becomes more complicated when relatives live far away and the Christmas victims have to drive or fly for hours to celebrate with the respective parents. Our grandparents had it easier, there were no cars, no airplanes and they stayed in their own town or village. 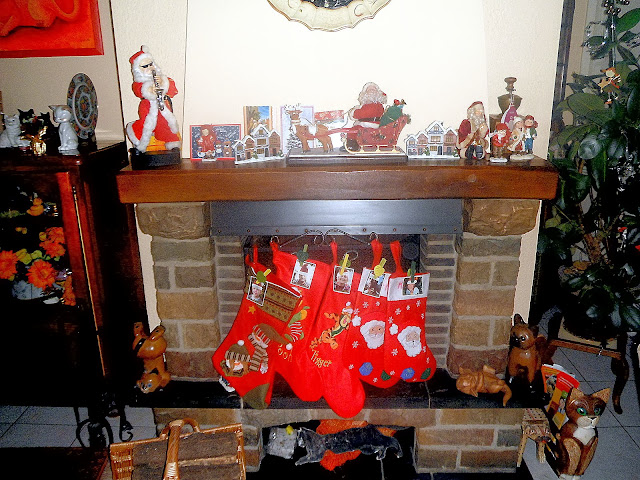 I did my duty too, composed the meals run around for the gifts, and now everything is ready for Santa to come. Even the chimney is cleaned so that Santa doesn't spoil his red coat, with all the visits he has to do in the world. Climbing in and out of chimneys must be a hard work for the old man ! He earns a medal ! 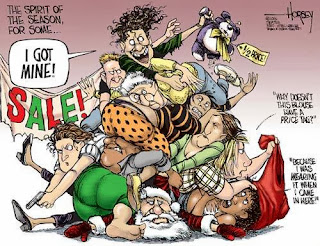 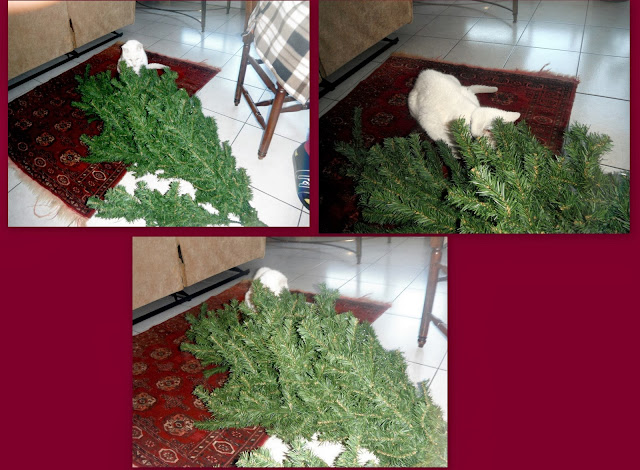 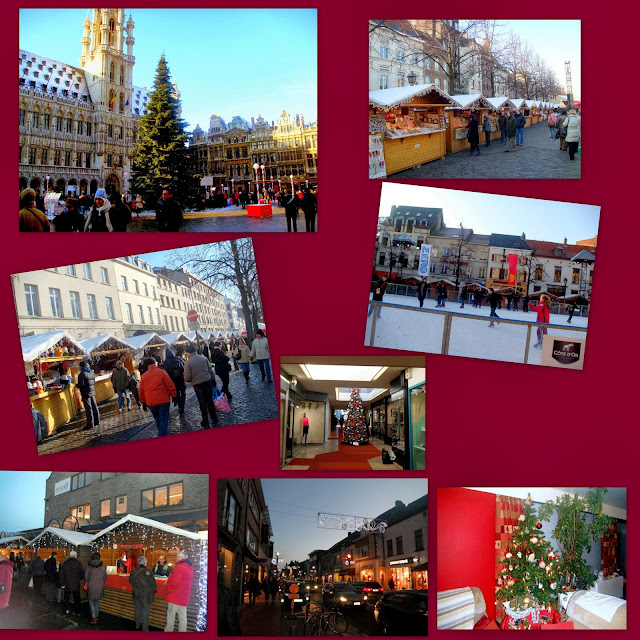 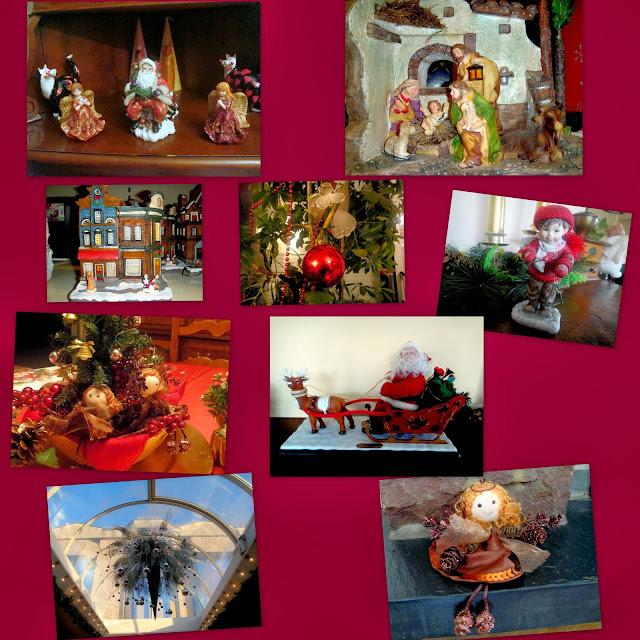 In my world as probably in "Our World" too, we are all surrounded by Christmas ornaments, decorations and markets, at least in the Western world. I am no exception ! 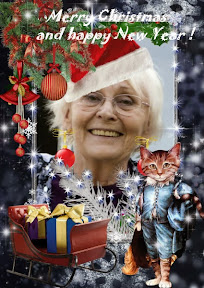 MY WEEKEND OF DECEMBER 21

I thought I had everything for the Christmas suppers, but as usual I had forgotten something ! The cheese for the Pierrade we have  on Christmas Eve. It was so cold and stormy that I didn't stay long and returned quickly home ! 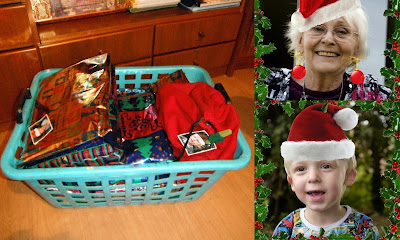 The whole afternoon I spent with working for Santa Claus, I wrapped all gifts he should put in the stockings or under the tree. He should think about bringing wrapped gifts ! I had created little labels with our faces on, so that also Toby can "read" whose packet is for whom. Then I hid the laundry basket in Mr. G's room. As Santa is supposed to come through our chimney I also cleaned the open fire, so that he doesn't get too dirty. After that I pushed a big sigh of relief and spent the rest of the afternoon with sending Christmas greetings per email. Last year I had written two by snail mail, one for the State
s and one for another country far away and they arrived "already" end February. I should have included the Easter bunny at the same time ! That was a real slow snail !

Our neighbors went on holidays and we are in charge to feed the cat. He is a purely outside cat and lives in a spacious doghouse. But as it had rained so much he was wet and therefore the blankets in his house were wet too, so I took dry once I had laying around and replaced them It breaks my heart to know him outside, in this awful weather but that is his way of life. He only stays inside a couple of hours when my neighbors are there in the evening, but then he wants his freedom again.

I wanted to make my little walk on the market, but it was so rainy and the wind blow that I feared I would land on a vegetable stall, and decided to stay home. I don't remember what I did, but suddenly it was supper time and besides chatting with Dominique on the phone and "working" on the computer the day suddenly was  over.