1. After aquagym I had to buy a new grass cutter for the borders, our old one had broken down. I had the good intention to do some garden work in the afternoon. But with intentions the work is not done, especially when you change your mind and rest watching a discussion about twins on TV. It was very interesting so I had a good excuse.

2. As the weather was so nice, Ilona and I decided to visit Maastricht in the Netherlands, which is located near the German and Belgian border. It is not that far only around 100 km (62 miles) 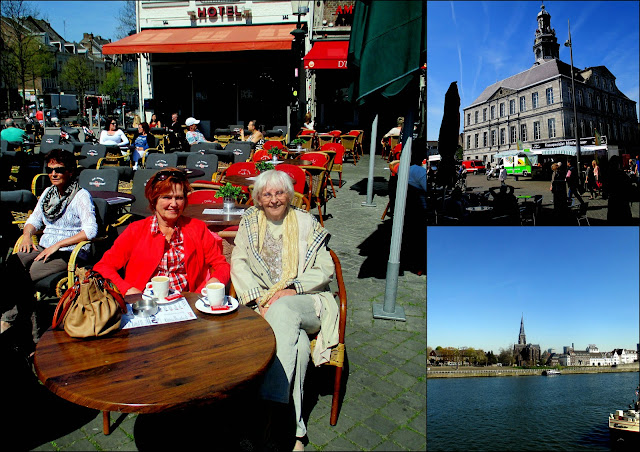 It is a beautiful little town and we walked around, had lunch at the border of the river Meuse and then a coffee on the huge place in front of the city hall.

Under the watchful eyes of cat Arthur I finally cut all the borders of the grass and dead twigs, but after one hour and a half, I was fed up, I don't like garden work but it has to be done. Now our garden looks nearly perfect.

4. My friend Sylvia from Linens and Royals, had sent me a DVD about the visit of the Queen in 1954 in Australia. 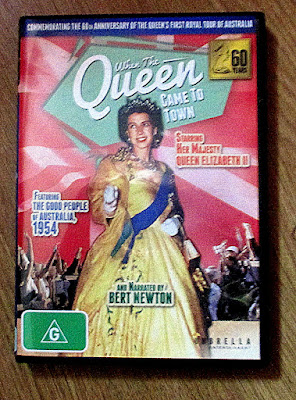 It took a month to arrive in Belgium, maybe the mail had walked the parcel over here. The movie is excellent, the old films were of such a good quality and I was amazed to see the big reception the Australians gave for the Queen. The shows and performances all over the country were better than all Olympic game shows of the last years. It was unbelievable. Sylvia was in the movie too, she gave an interview about her mother who had bought an entrance ticket for her and showed the ticket. Then she showed her Royal collection which is really impressive. I recognized her immediately, we had met in Brussels, when she had come over to London to see Kate's and William's wedding in 2011. 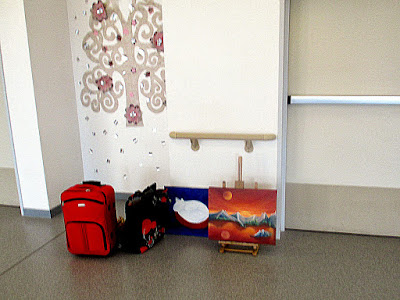 Before leaving the painting class I took a picture of my unfinished cat together with Ilona's finished painting. Although we have a lot in common, our paintings differ ! She is always up in the space and the future and I am always down on earth with my cats ! 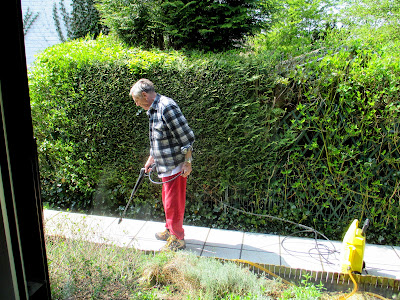 I watched TV, while Mr. G. cleaned the tiles around the house. During winter they always become a little gray and dirty. But then I joined him and salted the gravel which is now weed free thanks to the weed burner to avoid that the weeds grow back ! Salt is very cheap and efficient !

My second job was in an American company. We were only about 6 people, all Belgians except me, but I can't really remember as I didn't stay very long.

The accountant was an old woman in her 40, at least I thought so because I was only 22 ! She had long blond hairs was rather short and round, always wore mini skirts and on the body sticking clothes, which made her look everything else than an accountant. She was very funny but also very moody, but I liked her.

One day she was absent and I had to look for a file in her office. I went to the filing cabinet and started my searches. I took out one file after the other and suddenly when I reached the one I was looking for, I saw behind 3 empty bottles of Whisky and one half full and the other untouched.

At first I didn't understand why Whisky bottles were standing behind the files and not in the bar we had in the kitchen. The office was in an old house. And then suddenly I understood, she was enjoying her Whisky out of the bottle as there were no glasses while working and that explained too that she was so cheerful most of the time while in other moments she got moody probably because she had run out of fuel.

Of course I left the Whisky bottles were they were, but moved the files a bit so that nobody could see them. I took my file and left her office. Honestly at that time I didn't really get what happened to her, but an instinct told me not to tell what I had seen to nobody in the office as least.

I couldn't keep my mouth shut with my friends and we laughed about the stories I had to tell. There were a lot !

As I left the company just before it went bankrupt, I will never know if the Whisky bottles were involved. 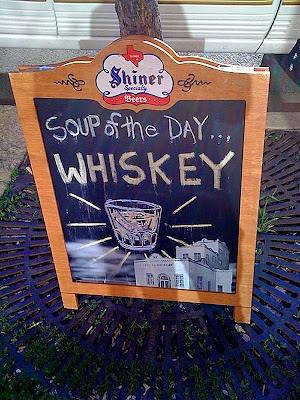 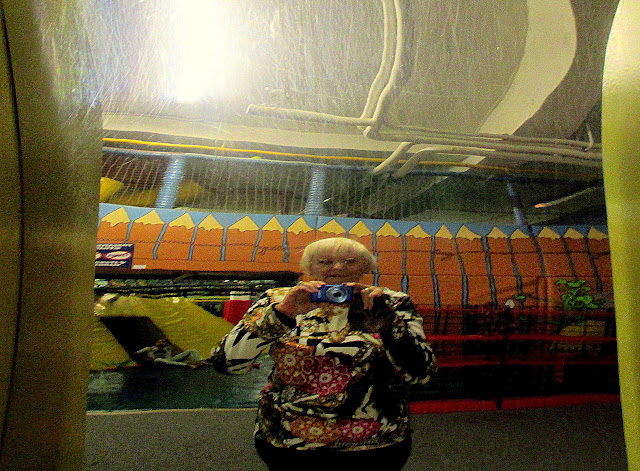 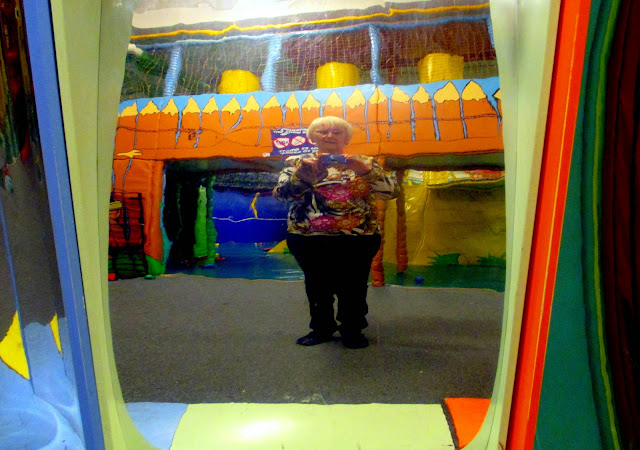 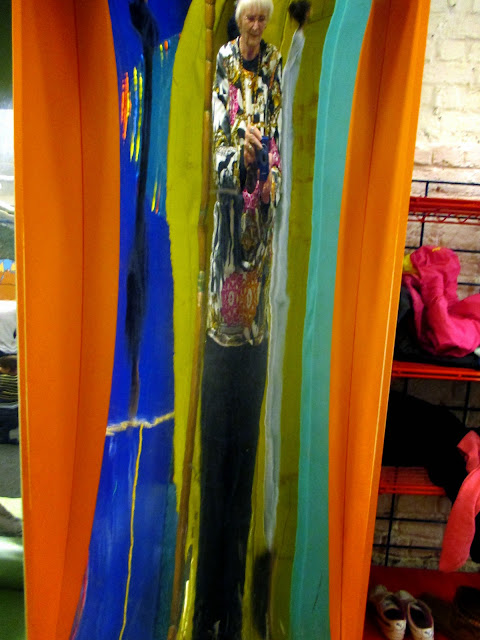 A WALK THROUGH THE LA HULPE PARK

After this long winter I enjoy walking in a park around my city. Not far is the Solvay/La Hulpe park which surrounds the castle built in 1840 and was bought in the late 19th century by Ernest Solvay who was a Belgian chemist, industrialist and philanthropist. Ever since the park is  known as the Domaine Solvay. Today the property is owned by the regional government of Wallonia, and is classified as an "Exceptional Heritage Site in Wallonia." The grounds are open to the public. 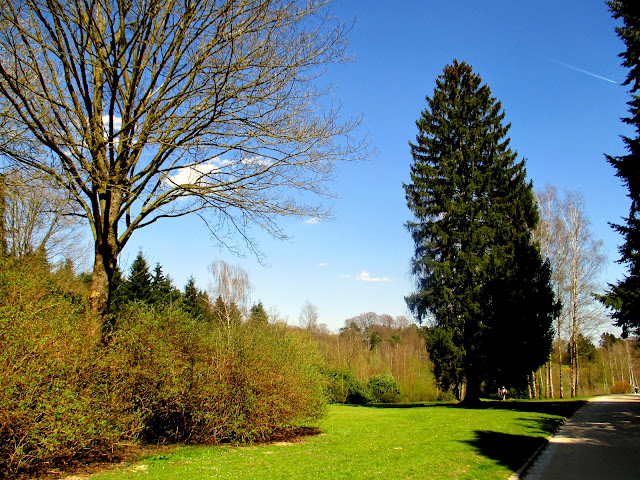 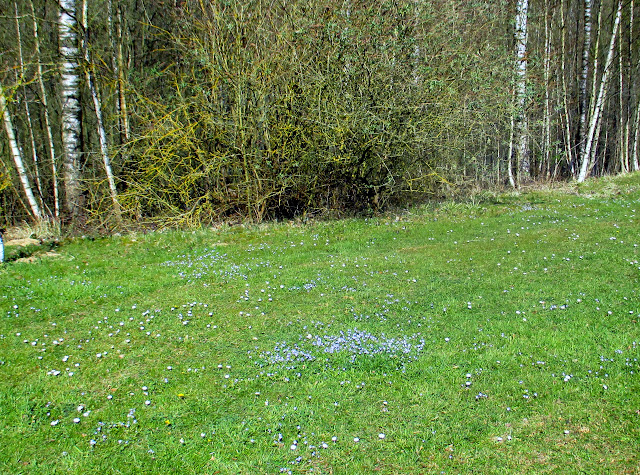 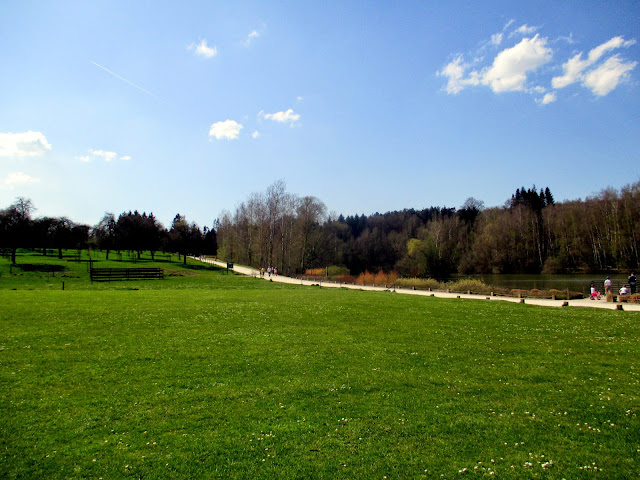 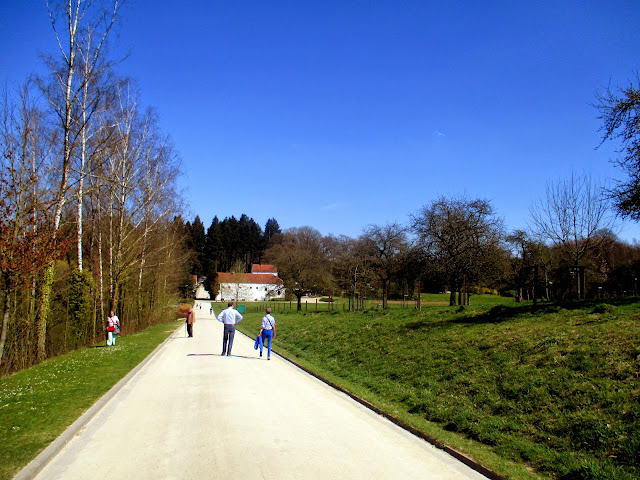 We walked the long way through woods, meadows and orchards 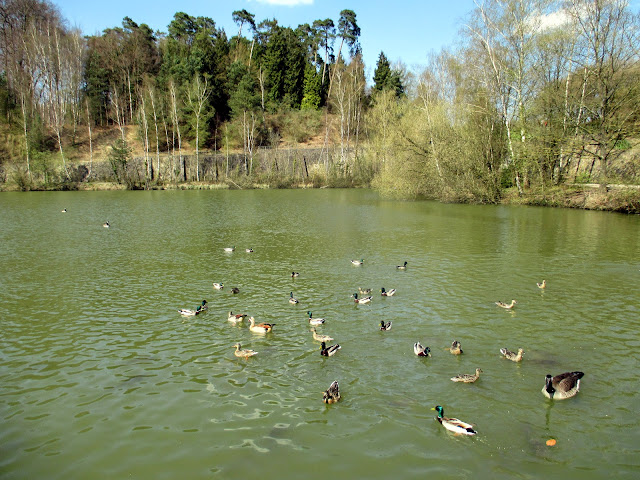 along a quite big pond 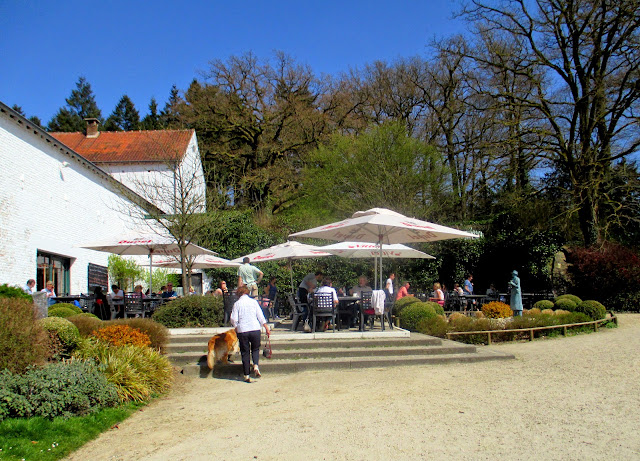 until we arrived at the Brasserie. 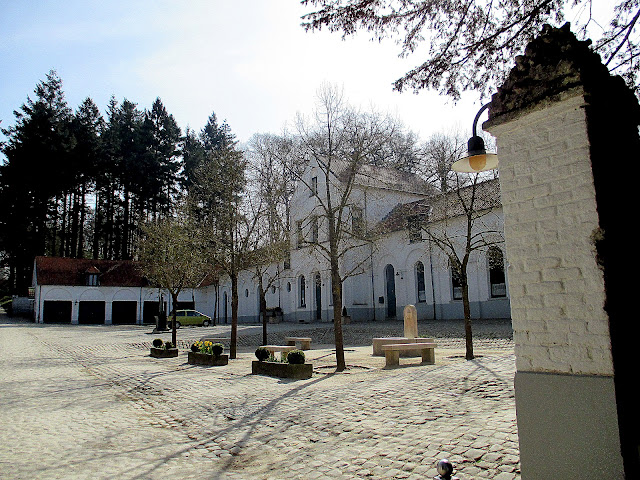 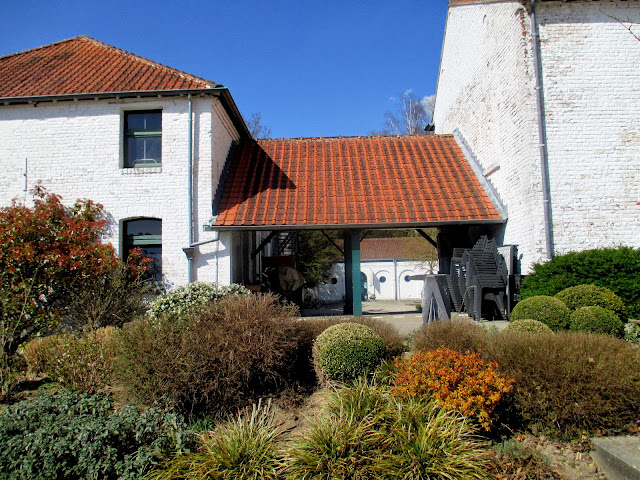 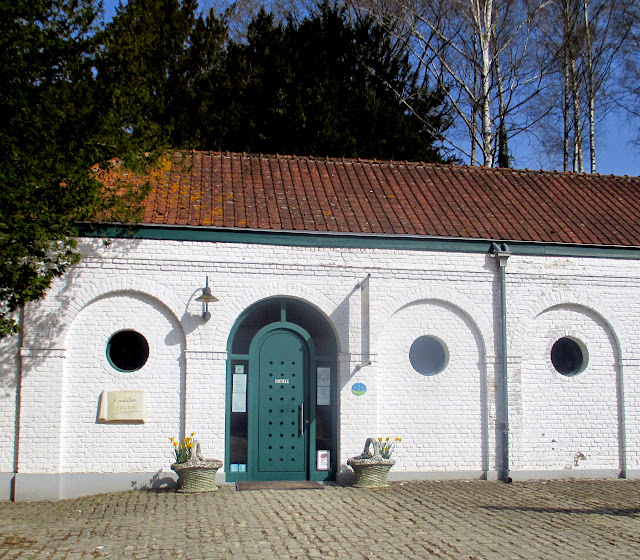 This building was once the farm which belonged to the castle. Today it contains a restaurant and an exhibition hall for artists. 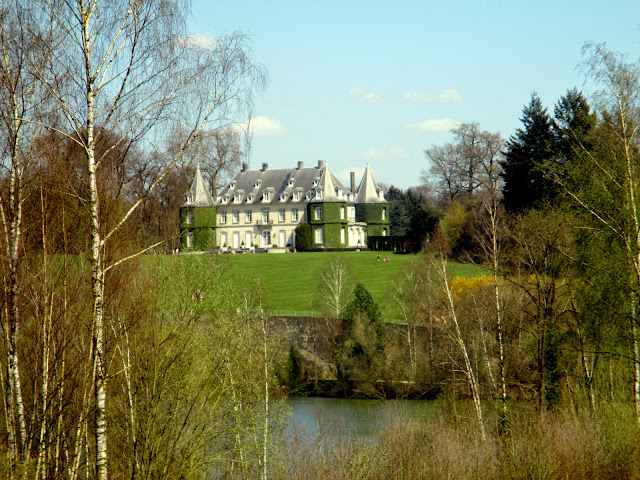 from far away you can see the castle. 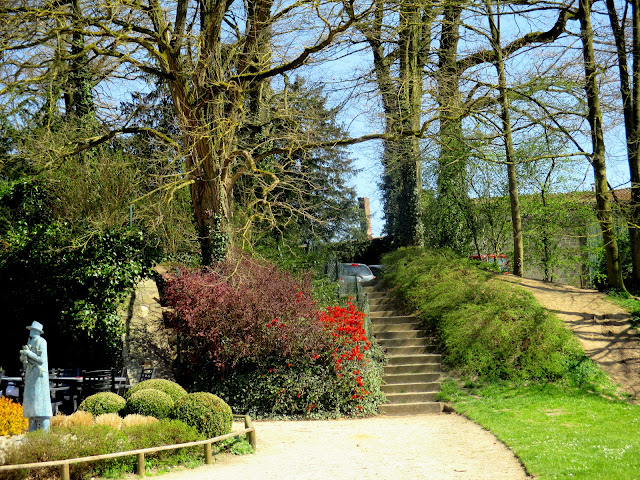 steps besides the farm leading to the castle 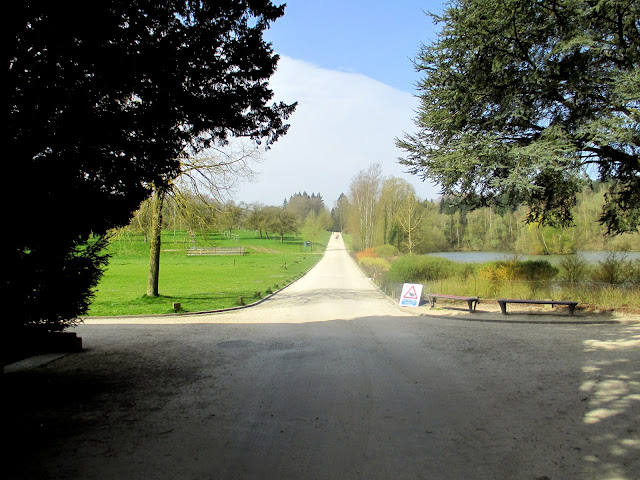 And then we had to walk this long, long way back ! 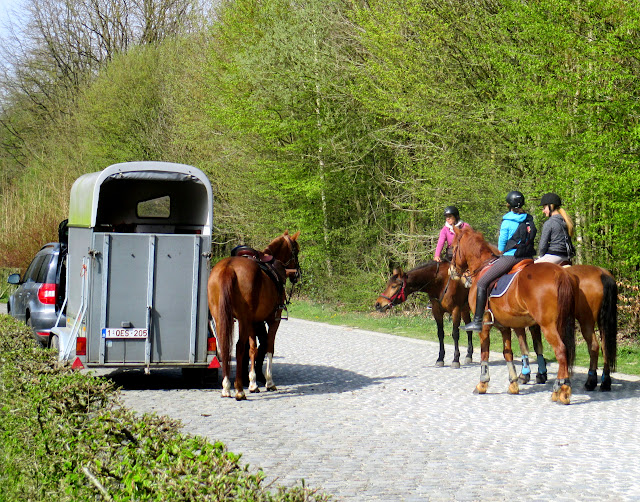 The park also contains a riding school for hippotherapy for autistic, physically and mentally handicapped children

Just before we arrived at my car, we saw a group of riders with their horses, ready for a walk


I wrote about the castle here

On Saturday morning I took out the bread of the bread machine and it looked like a pancake ! Unusable, it was hard like a stone. I had noticed lately that the machine didn't do it's job correctly anymore. 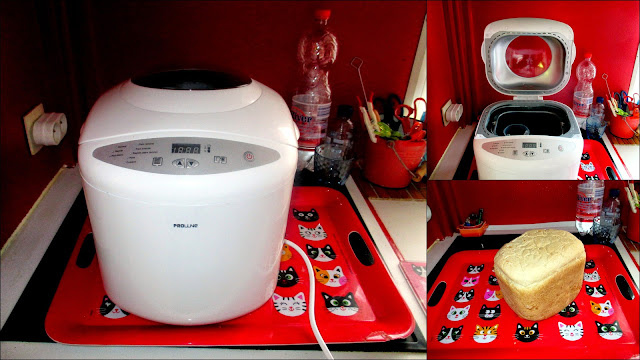 A decision was quickly taken ! I bought a new one a little bigger than the old one, because I had to bake nearly every day as Mr. G. is a big break consumer. He eats bread with everything as they do in Italy. In a restaurant you will always get bread, olive oil and salt, to eat before the meal arrives. I tried it out in the afternoon, and while I was chatting in Ilona's garden, the bread baked and when I came home I was very happy with the result ! It was just perfect and tasted very good. 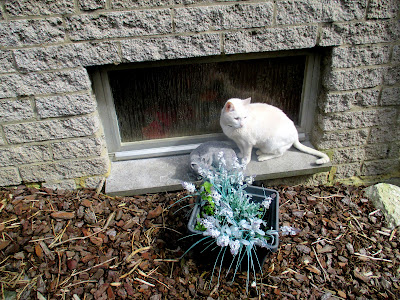 I also trimmed some bushes growing in our rock garden into a more round shape. Of course Arthur had to supervise my work !

On Sunday morning I went to the Brussels Midi Market to buy some shirts for Mr. G and for a friend, unfortunately I didn't find the one's I wanted. 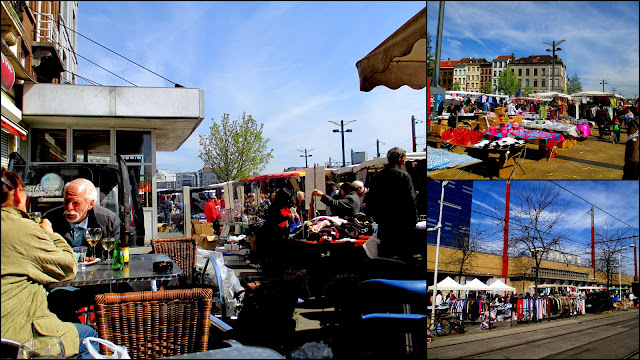 While I had a coffee on the terrace, I saw this gentleman drinking a huge glass of beer together with 3 glasses of wine. I hope he returned home safely. The market was full of people, the sun was shining, but the temperatures were rather cool ! 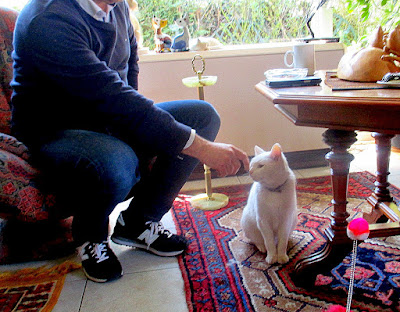 In the afternoon Mr. G's friend came for a visit and Arthur as always was happy that we had a visitor. He only was disappointed,  that he hadn't put on leather shoes, because Arthur loves to sharpen his claws on them. The friend knows that and now he always comes with basket shoes !
Posted by Gattina at 06:00 4 comments: