I have to look at my calender to know which day we are ! With Monday being already a Sunday or nearly, everybody is a little disturbed.

In the last minute my son had asked me if on Christmas day his friend and family could come to us and of course I agreed ! It is his best friend and now his little son also 8 years old became best friend with Toby. 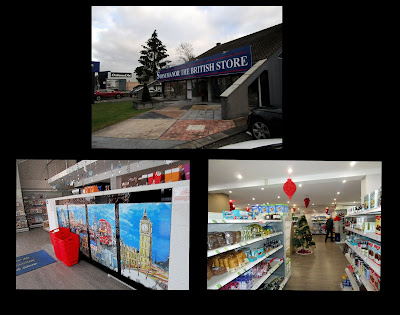 Now I  had to run to buy some cake, and fortunately I thought about the English shop very close to us, where I could buy very good English cakes, except a Christmas Pudding which was sold out. The shelves were empty all Christmas things had been sold. But I found a Fudge cake and Apple cake etc and it was enough.

The friend's wife is English, so I thought it brings a bit of home to her.

We celebrate the German way (and also the Royals in the UK) on Christmas Eve. 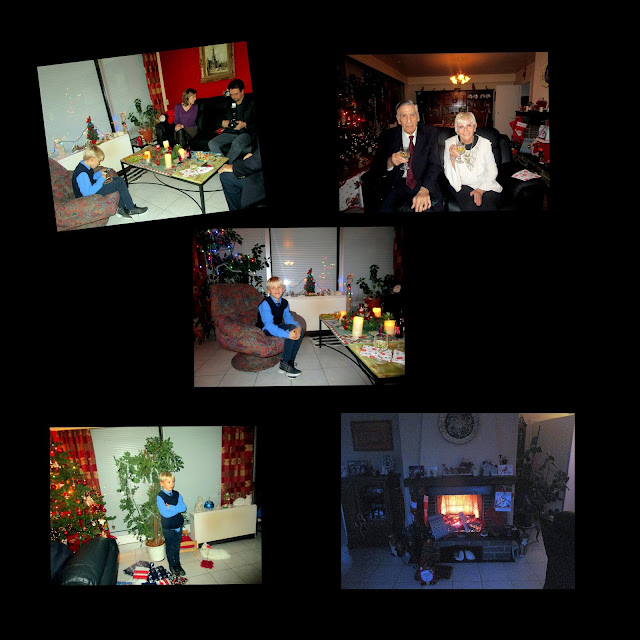 Listening to Christmas music, looking at all the parcels and boxes under the tree and the open fire, while we had a glass of Champagne. Toby too had Champagne for kids, called "Kiddie bubbles" which he liked so much that he almost emptied the whole bottle before we even started ! 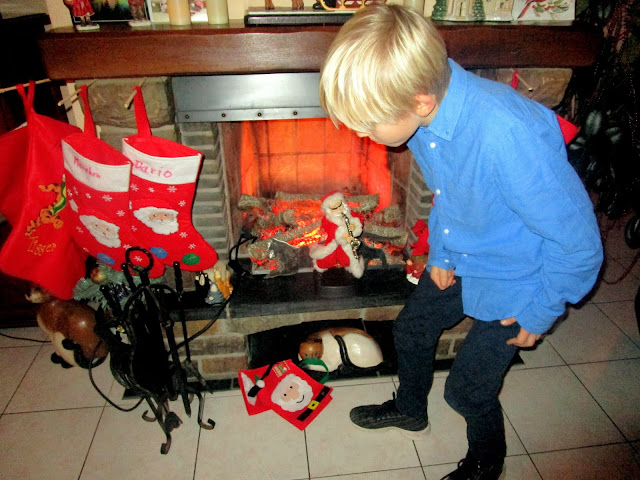 Toby checks if there is no gift left ! and then the gifts were distributed. The one who got a gift, had to pick up another one to give it to this person and so on. Of course Toby started. 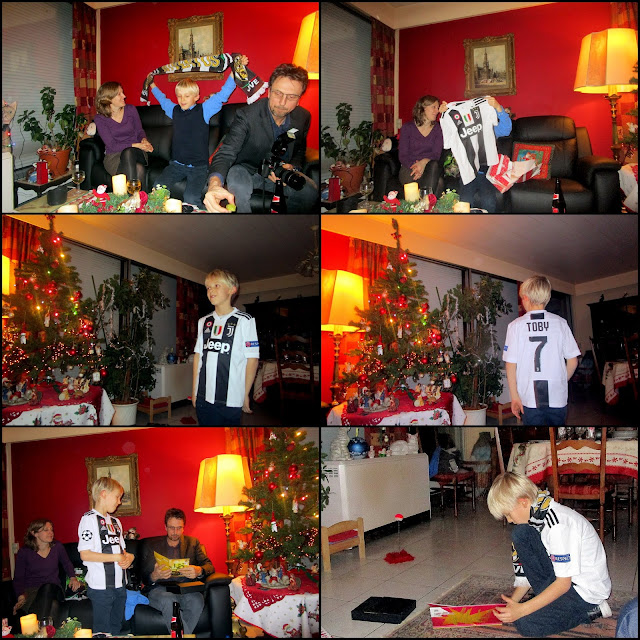 I think what he liked the most was the scarf of his beloved Football (soccer) team which I had found here with some difficulties and from his parents he had got the matching T-Shirt. That was perfect. Of course the other gifts he liked too, but there is always one which is a favorite. 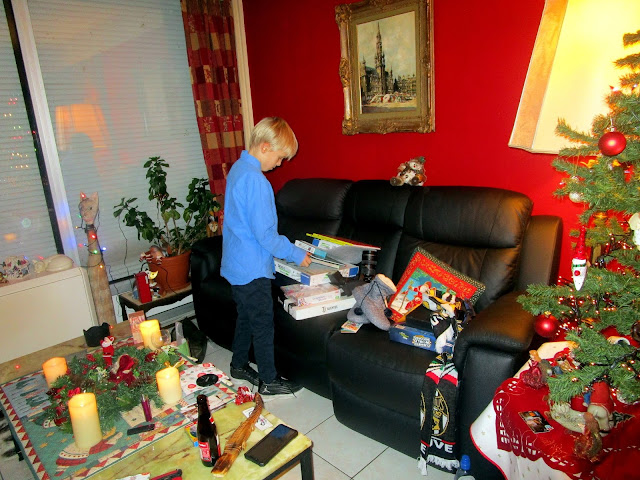 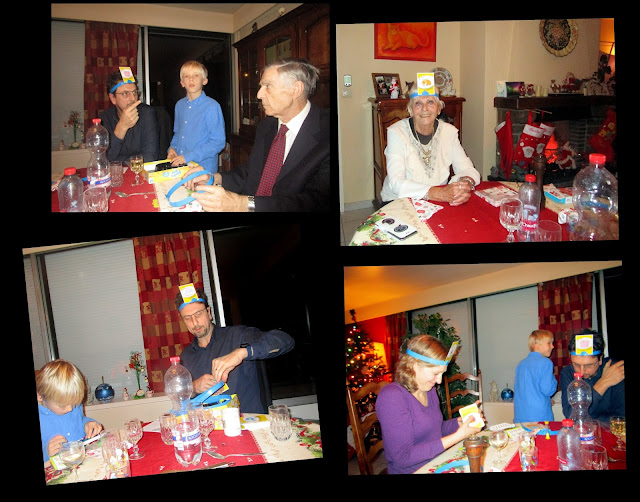 The rest of the evening we spent playing a very funny game, you wore a card with an object written on it and you had to find out what it was. It was so much fun that my belly hurt so much I laughed.

The next day son and family came earlier, he had bought a lot of different things for a buffet. He put everything on the table and I added my cakes, the coffee and the cutlery and dishes. 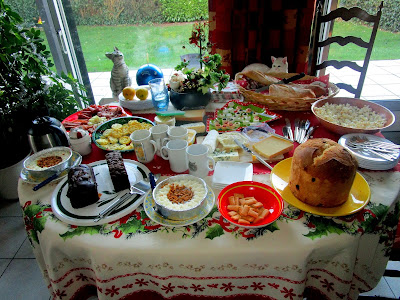 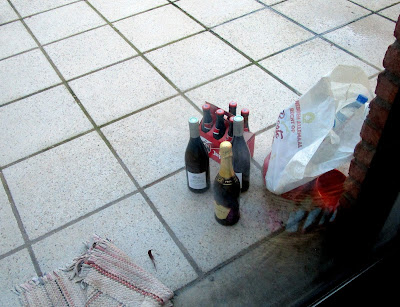 The drinks were standing outside, as it was probably colder outside then in my fridge ! And then they all arrived and we started eating, drinking chatting and at the end another funny game which we played together. The "United colors of  Benetton" as I call Toby and Benji played and had a lot of fun and we too. Before they went away, everything was cleaned up, little Benji just put a broom away when I came back from my room. It was as if nobody had ever been there. I was really touched, I had nothing to do anymore, then going to bed !

On Wednesday they arrived late morning for a cup of coffee before returning to Amsterdam. 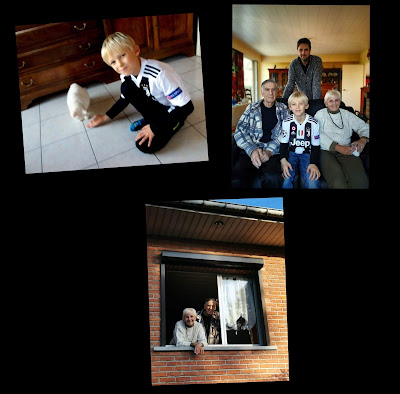 And my DIL took a photo of the three of us and Toby said good bye to Arthur and we waved when they went away.

I was hanging on my sofa almost the whole day to recover from I don't know what, because I can't say that I was overworked ! But a movie cure on TV was nice too. I also had some phone calls to do !

The next day I had invited my friends for a coffee and cake, so that we could could chat to our heart contents about our Christmas celebration. 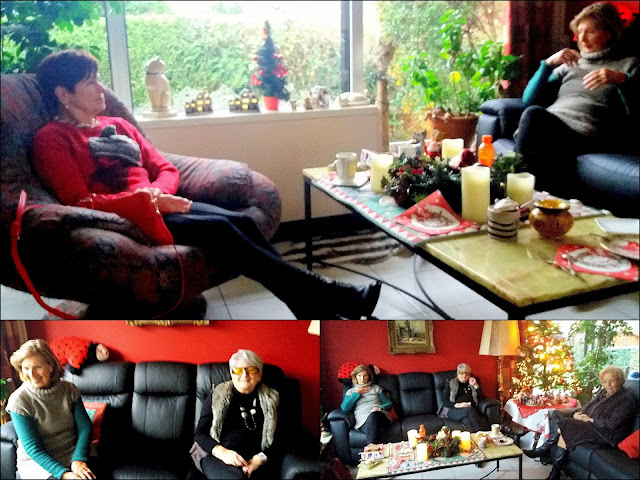 Everybody had a nice family celebration without catastrophes, not even a few broken plates or glasses. It had been a nice afternoon. 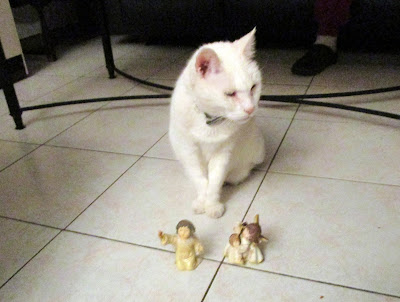 Of course Sir Arthur didn't leave us girls alone, he went from leg to leg and was so happy about the company ! But he didn't play with the angels one had offered him to play ! Anyway he was a good entertainer, because he played with a garland hanging from my plant !

Our little town Waterloo had it's own Christmas market as usual each year, unfortunately the weather was so bad, so that less visitors were coming, it rained and I couldn't take a lot of pictures either 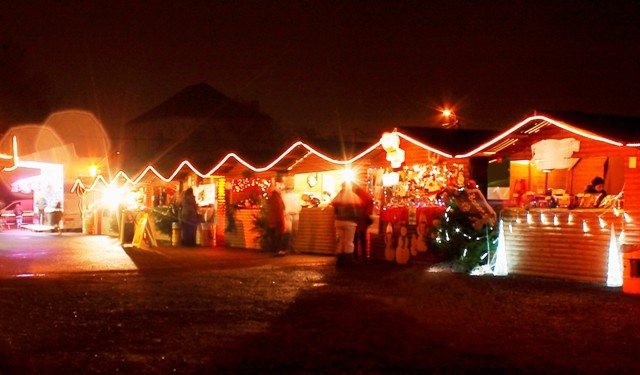 part of the market 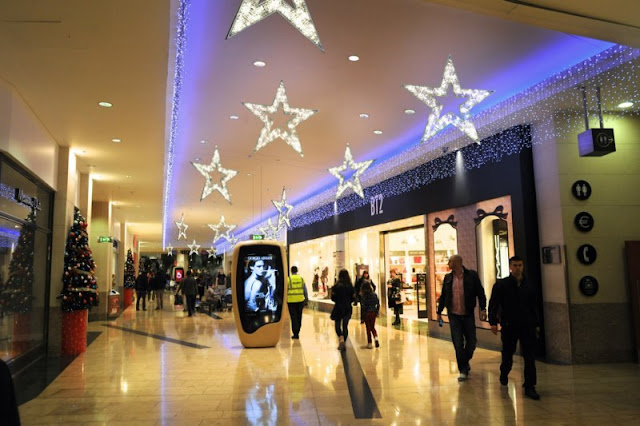 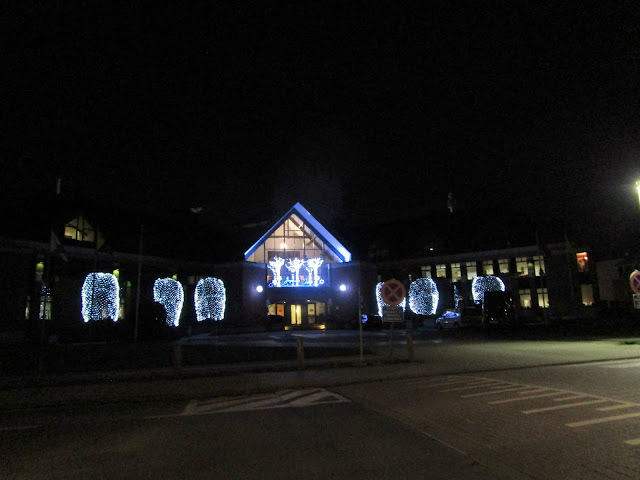 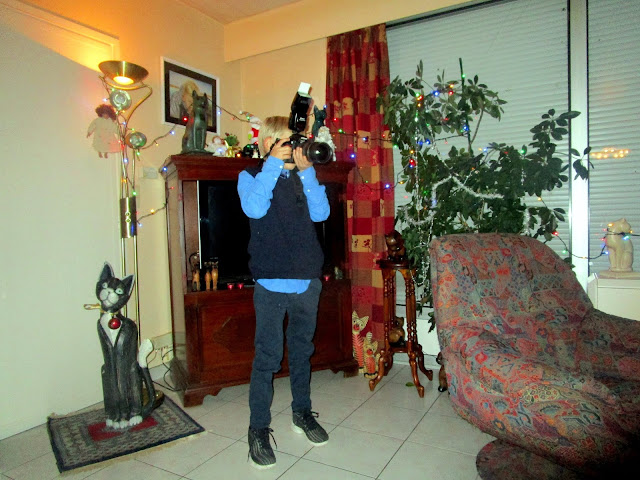 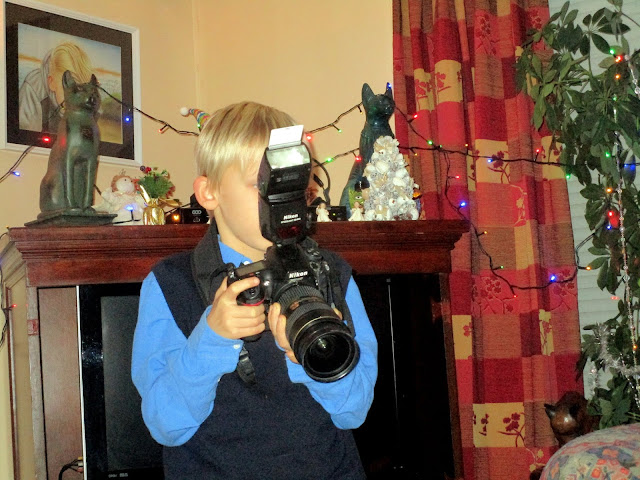 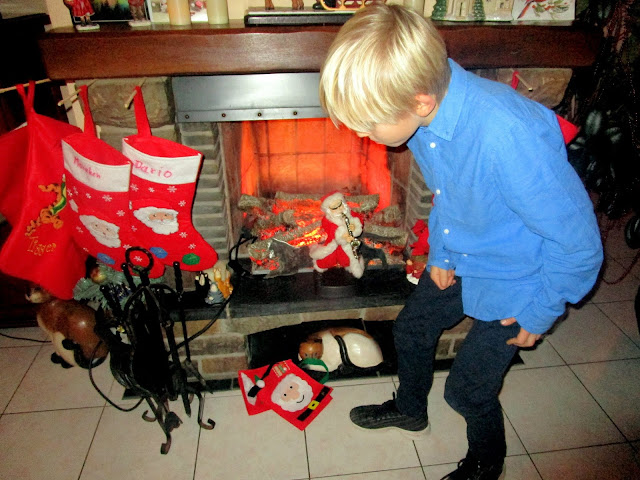 where are the gifts ??


more participants here
and Image-in-ing
Posted by Gattina at 11:53 9 comments:

To all of you I wish a 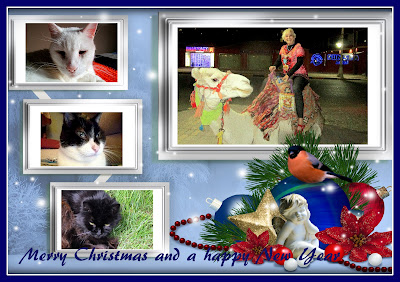 The weekend was a bit hectic, with shopping for Christmas Eve the arrival of son and grandson DIL will follow today. 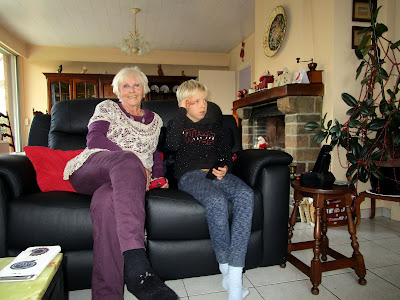 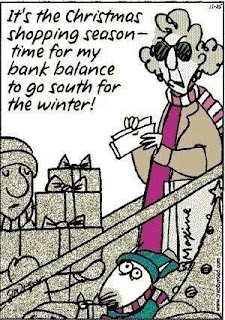 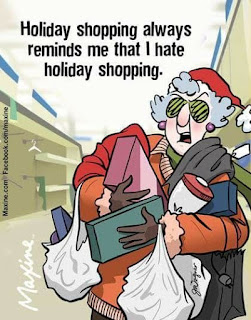 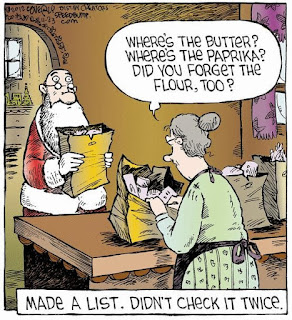 Besides running around for food which was in itself a challenge,  the shop where I went was so packed as if people feared a 3rd WW !

Now it seems to me that everybody only thinks of food, and expensive wine which at least here in Belgium is so important. Whoever I talked to these two days was "What do you eat on Christmas Eve (or day) " ? The hit here is "foie gras" which is quite expensive and in my eyes disgusting when you read where it comes from and how it's made. But it is a "must" for Christmas. I don't buy it and nobody in my family eats it.

We always celebrate on Christmas Eve and while drinking an aperitif we open the gifts and after that we have our Christmas meal, and  on Christmas day it starts again !

So these to days I spent with preparing everything I just made a break yesterday afternoon when I went to see son and grandson at his friend's house and forgot to take pictures !