A DAY ON THE YVOIR ISLAND

We had booked a daily excursion to Yvoir a little town near Namur at the beginning of the Ardennes. It had been important for the resistance against the German attacks in 1940.

We were very lucky this day it was sunny and even a little too hot 30° !

Our first stop took us to Spontin a little town where the train station was located. We took an old train which was built from 1890 to 1907 and closed for public use in 1960. In 1992 volunteers restored it  for tourists throughout the summer. It allows to discover a beautiful valley.

The train inside had wooden seats and we were happy that we didn't have to travel for miles and miles !

After this adventure with a few stops because there was something to be made at the engine, but don't ask me what, we returned to the Spontin station and our bus. 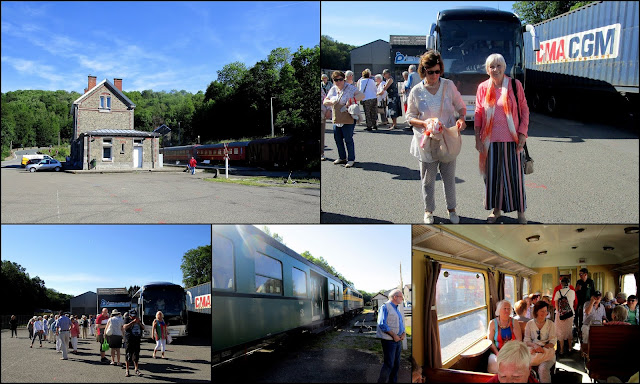 We arrived at the station and climbed in the train. Nicole and I in front of the bus, and then Myriam and Nicole in the train. 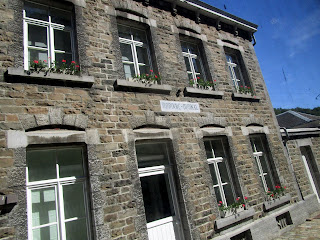 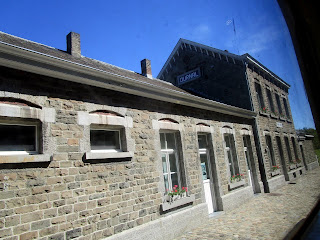 I loved the local bricks which were used for all buildings. This was the station. 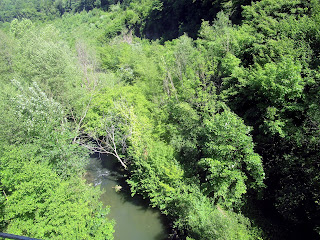 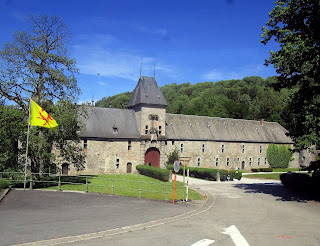 We saw a lot of green, but also very rocky wild looking places and then buildings 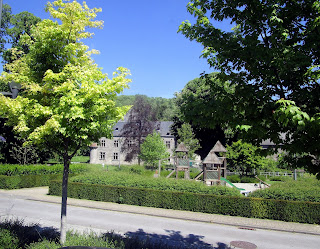 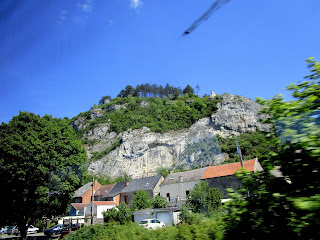 The next stop was the Yvoir Island. We drove through a beautiful landscape and picturesque little houses and villages and arrived at the Meuse river where a little ferry which took us to the island only 400 m long and 100 m wide, it covers an area of ​​2.5 ha (6.1 acres). 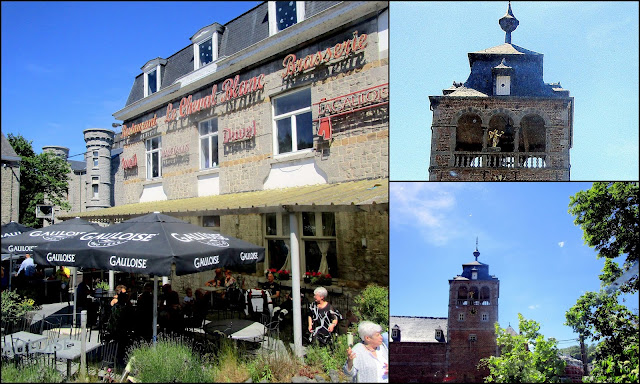 Our bus dropped us off and we walked through the city to the ferries. 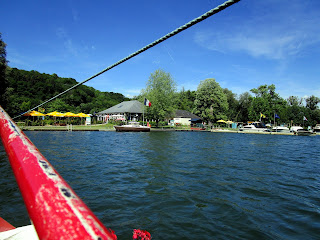 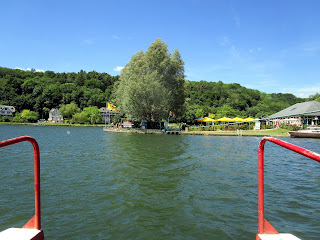 There was a restaurant on the island, a playground for kids, a beach and boats of course. We had a nice meal, a barbecue and a Tiramisu and coffee. 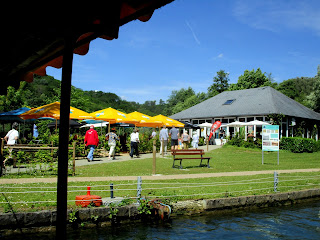 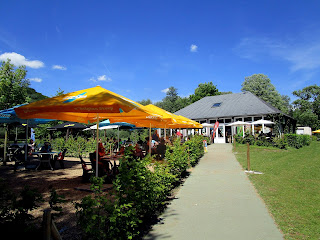 Walking towards the restaurant where we had our barbecue 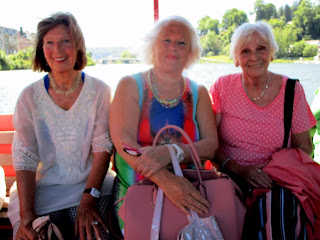 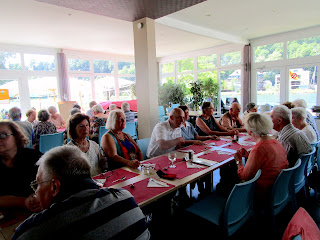 Nicole, Myriam and me 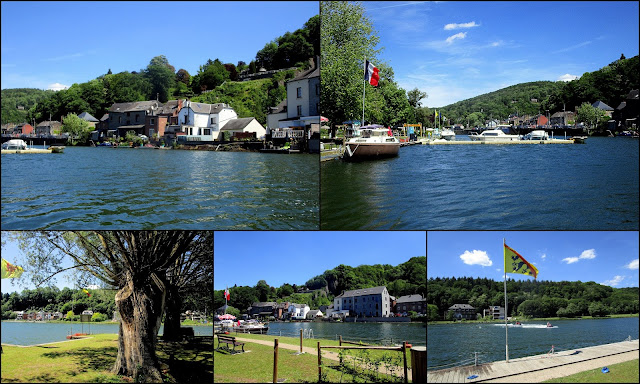 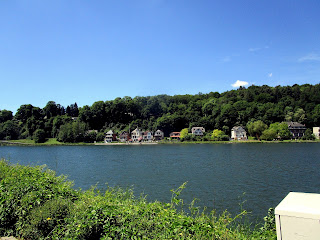 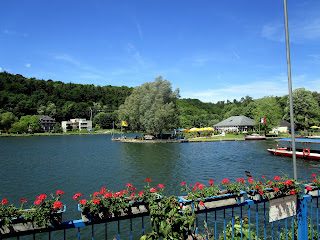 Views from the island

After 3 hours the Bus took us to a Brewery which was built in 1858. It started as a little Brewery annexed to a farm. The beers were only sold locally. With the creation of the beer "La Gaulloise" a dark strong beer, the brewery became too big and was bought by another Brewery.  Today the annual production is 94.000 l ! 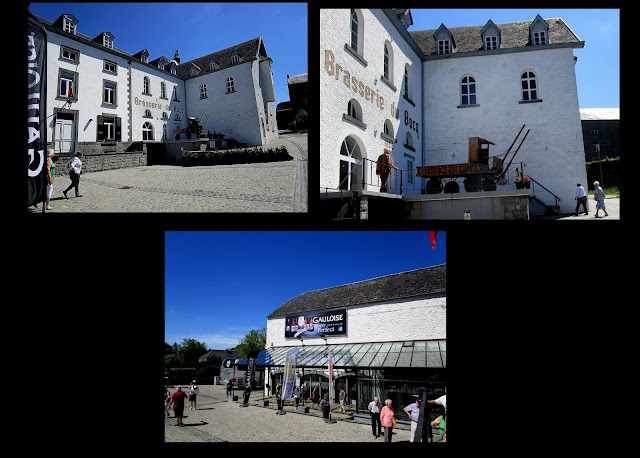 The brewery and its Brasserie where we got our drinks. 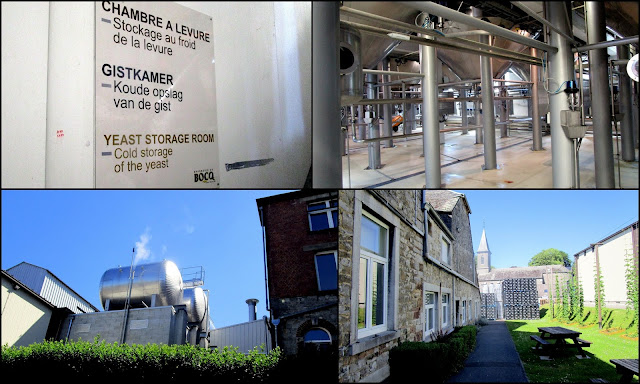 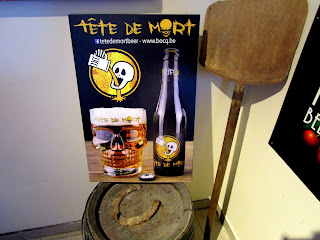 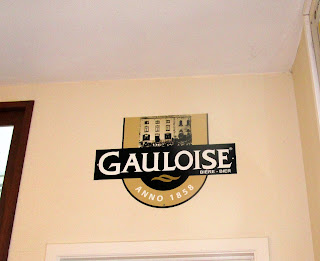 A very strong beer called "Skull" and the label of the Gauloise which made the Brewery so famous.

We just assisted politely the tour a little bit 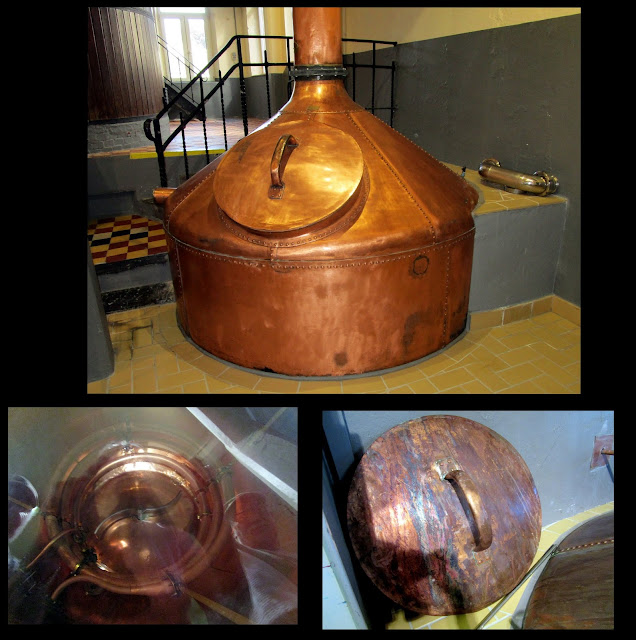 admired the huge copper container from inside and outside 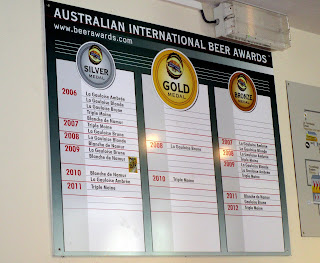 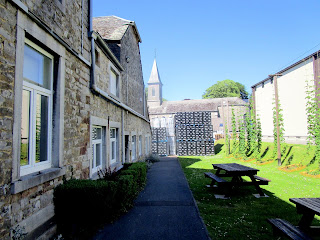 and the awards and then we disappeared and went outside to have our free drink in their Brasserie's garden, unfortunately I forgot to take a picture ! And I hadn't even tasted the beers ! 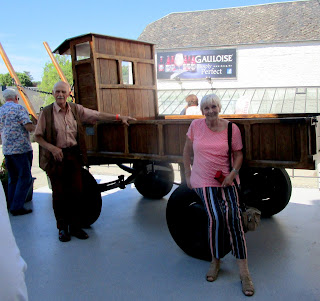 Just in front of the Brewery stood this old carriage pulled by horses, with which the deliveries were made.

We have enjoyed our day very much, it felt as if we had spent a few days of holidays !