1. On Monday it had cooled down enough to finally be able to clean the house without melting to a pile of skin, bones and grease ! My cleaning lady is on holidays so I had to replace her. After pulling around the vacuum cleaner, suddenly the tube went off the screw was broken ! Fortunately there was only one room left ! I went to the shop where I had bought it and got a new tube the vacuum cleaner was still under warranty.

2. Together with Ilona we went to see her mother who had a hip surgery at 90 (!) She was now in the new built wing of the hospital in the recovery section. She looked great and had recovered well and could even walk alone. This was such a nice place, with 2 persons huge bedrooms, shower, fridge and TV. It's not a private hospital, and the obligatory health insurance pays everything. There was a fitness room, and also ergotherapy section. We chatted for a while and then I went back home.

3. I did the last shopping, bought a new pair of shoes, then I packed my suitcase because on Thursday I am taking the Eurostar train to London and from there to Eastbourne ! I had to pack my suitcase which was quickly done, 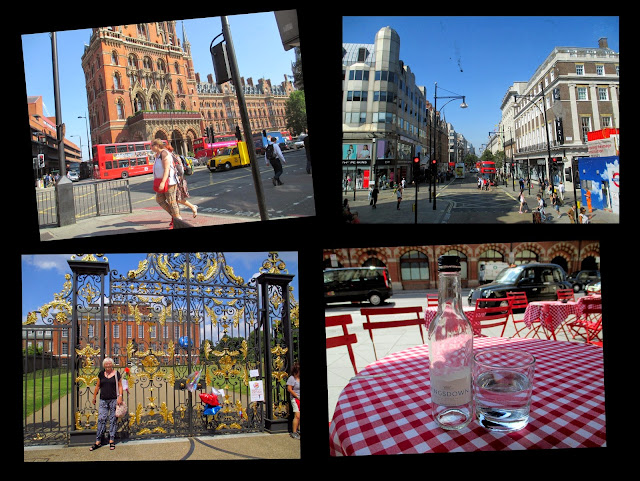 I took the Eurostar to London and arrived early morning,  you can see that I am in London, it's the only city in the world where you have these red buses ! I decided to go to Kensington Place and stay there in the park as it was very warm. While I was sitting on the bus, Marie, who lives in London asked me if we could meet. Initially she wasn't free this day. I was delighted and we decided to meet at Kensington Park. Of course I missed the stop, had to take the tube and arrived and didn't know exactly where I was. Finally Marie told me to just walk down the main road and suddenly she was standing in front of me. We had a drink in a Pub and I had something to eat, because I was hungry and then we walked to Kensington Palace and through the Park. We had so many things to chat about that time was flying by and I had to go back to the station and catch my train for Eastbourne. 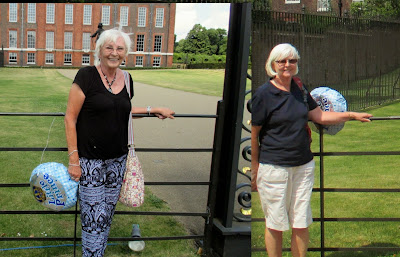 Mary and I in front of the Palace.

I arrived in Eastbourne at 6 pm and my friends picked me up ! Today my holidays start !

more participants at Susanne at Living to tell the Story.
Posted by Gattina at 10:37 11 comments:

THE JAGUAR AND I

Years ago I worked in Waterloo in an American Merchandising company. One evening when I drove home I had to stop at a traffic light. I felt that somebody was starring at me. I turned my head to see who it was and .... 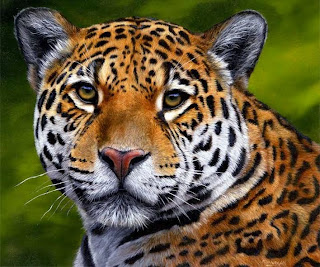 it was not a man or a woman but a Jaguar ! 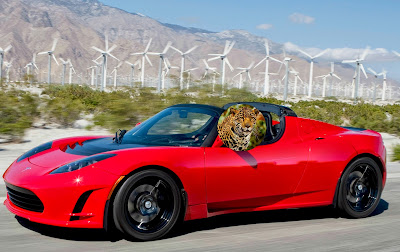 He was sitting in an open sports car and looked at me. He just was beautiful. He wore a red collar with sparkling diamonds. I will never know if the diamonds were real or if it was another stone, but still the effect was the same and considering the car and the one who owned it together with a living Jaguar must have been without any doubt very wealthy.

I don't know who was driving the car, probably a fat bald oldie, that's usually the kind of sport car owners, unless it belonged to the son. Anyway the Jaguar and I looked at each other and I even got the feeling that he smiled,  which is completely ridiculous as even my cats never smiled to me ! When the traffic light went green and the Jaguar in the car disappeared in a roaring noise, I forgot to drive until somebody horned behind me and I woke up !

I will never forget this beautiful face it is graved in my memories. So it was easy for me to find adequate pictures on internet and did a little montage. 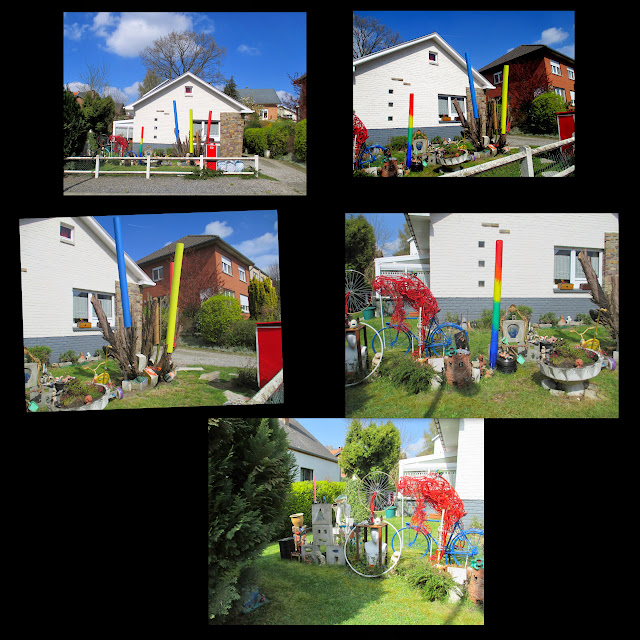 a rather special front yard decoration ! 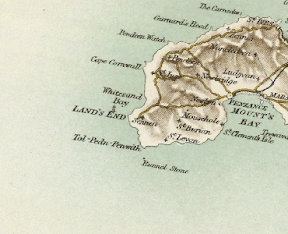 Land's End is mainland Britain’s most south-westerly point and one of the country’s most famous landmarks. From the 61 m (200 ft) high granite cliffs that rise out of the Atlantic Ocean you can gaze across to the Longships Lighthouse, the Isles of Scilly 45 km (28 miles) away and beyond that, America. For that you have to have eagle eyes !

MY WEEKEND OF JULY 19

On Saturday it was unusually hot, we had already 30°(95F) early morning and in the afternoon it was unbearable. Nevertheless I worked very hard ! I did laundry, made a bread and blogged, all at the same time ! My grandma would be proud of me ! 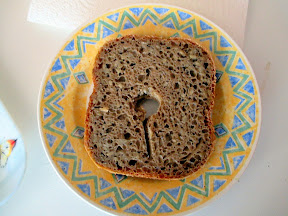 The bread slice had a funny pattern, it had a keyhole and tasted very good ! 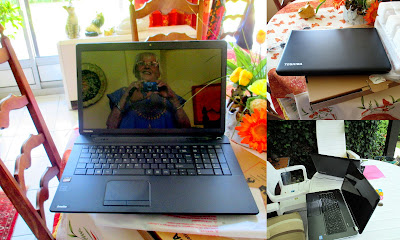 Mr. G's ten year old computer went on strike, it moved like a snail. We decided to buy a new one. As all little boys he wanted a Ferrari of course and not a simple city car. It took some time to convince him to be reasonable, for what he does on a computer which means keeping our huge 2 person household administration up to date, pay invoices and play cards, a normal one would do it too. And finally the reason won and he bought a Toshiba laptop with Window 8.1 ! 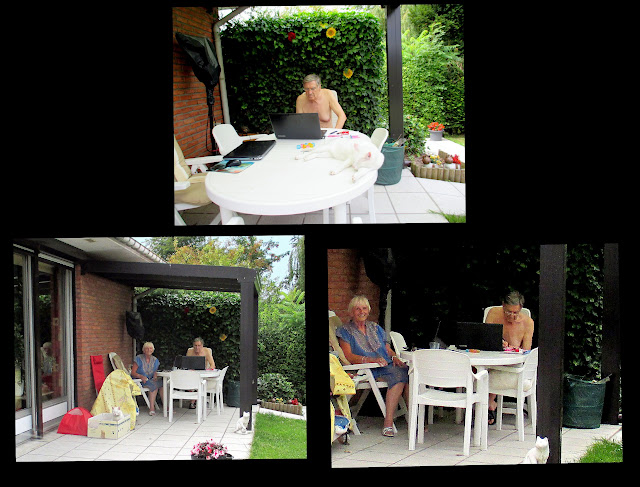 And for the first time in his life he worked outside ! Normally he never sits in the garden only when we have guests. So Dominique, our neighbor took this historical picture, both of us sitting side by side working on our computers. This has never happened in our 44 years of marriage ! Even Arthur the cat was surprised and watched us out of a box !

On Sunday we had a little thunderstorm and it cooled down. 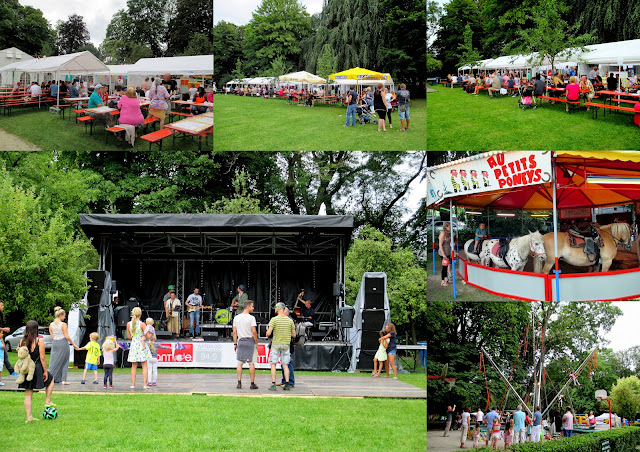 Belgium celebrates its National Day on Monday but the festivities began already Saturday. So Sunday I met a friend and we walked through the Waterloo park, where the festivities had already begun with different orchestras, lots of food stands with local specialities to eat and drink and lots of games for children. 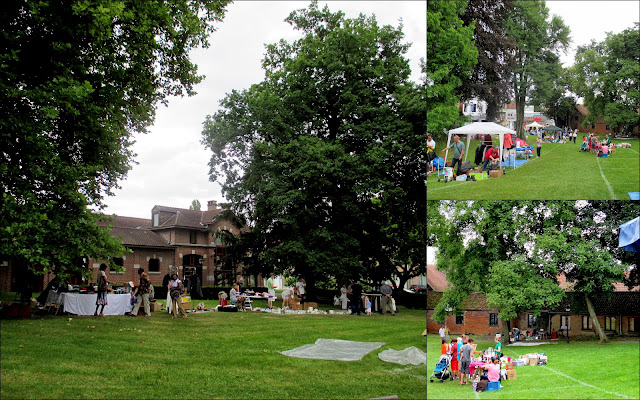 There was also a "junk" sale going on, but there was really nothing to buy and when we arrived most of the people had already left. We had a drink and watched the people, and everybody seemed to have a lot of fun. 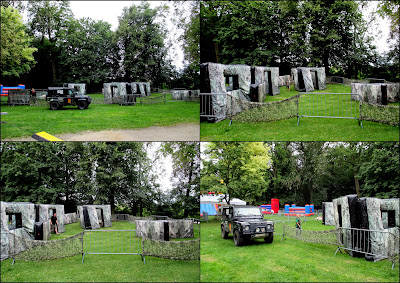 What I didn't like at all was this Military Camp where kids could hide and run around with plastic machine guns. I found this a shame for the city, with all the real wars going on to play war games ! It didn't look as if it had a lot of success, I only saw one boy !

The rest of the day a spent outside sitting on the terrace and writing.