1. We have a new teacher in our aqua gym class, a young woman who is all  round and short. She could have been the ideal model for the painter Rubens. Her head was just over the water and to show us the exercises she had to climb out. We all thought that sport doesn't mean that you become a "Twiggy" ! But she is very good and a very nice person too. 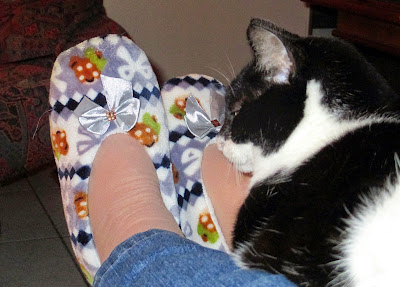 The result of the hopping around in the pool, made me fall asleep after lunch in front of Poirot on TV !

2. The Waterloo city had invited all seniors for a movie. I first had lunch with Nicole in a Chinese restaurant and then we all gathered at the entrance of the cinema. 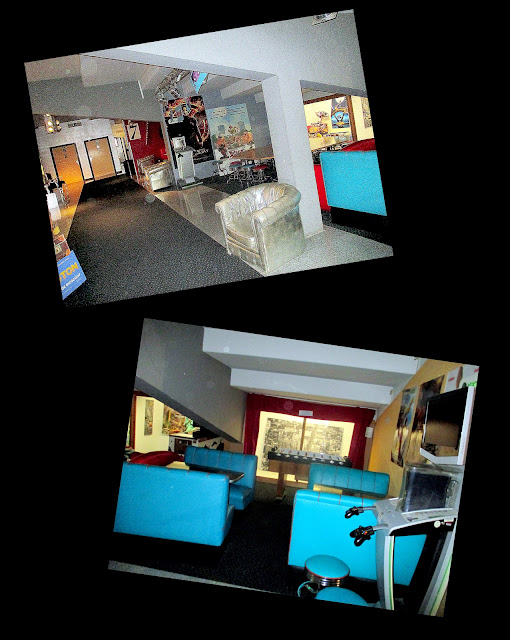 It's still the good old cinema which I have always known since we live here, only meanwhile it had been modernized. It is rather small and really cosy. We all got a little box of Belgian chocolate and then watched the movie. It was really very funny a French comedy, the story of a couple who wanted to divorce but none of them wanted the three children ! It ended with a happy end.

3. There was an exposition of young painters from Azerbaidjan. I had to google first to see where this country was ! It is near Russia, ever since the Soviet Union fell apart, there are so many new countries ! 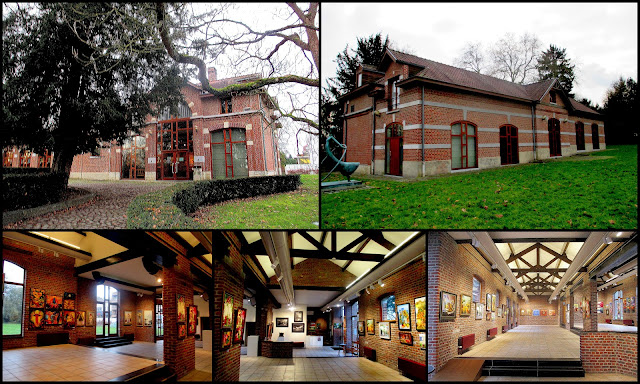 The exposition was in the old stables of a castle in Waterloo, which they had demolished, and had only kept the stables to transform it into an exposition center. It looks nice with its old beams. 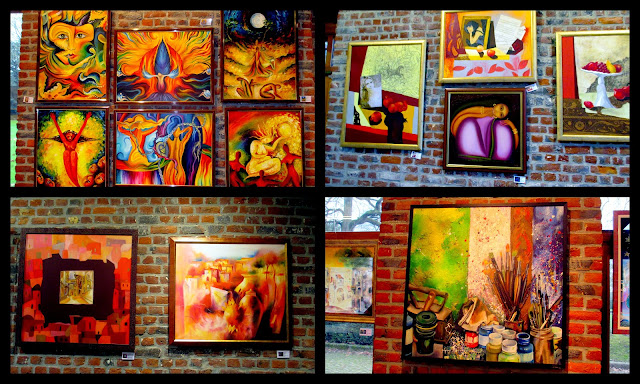 The paintings were very colorful and we really liked it.

4. I went to Ilona's again to install Skype on her tablet, it was impossible. Now she has to come to us, Mr. G. has the same tablet, to see why her tablet refuses Skype. We gave up and spent the afternoon chatting together.

5. During our painting class, it started to snow so much that we all thought we would get stuck when driving home. Coming out of the building, it had all melted and there was only a little bit of white on the grass. Fortunately none of us had left the class before the end.

The Newspapers published today an incredible printing error on a official card from the Royal Palace. Beginning December the Queen Fabiola died. In their thank you note, instead of writing "Fabiola" they printed "Paola" who is the Queen and mother of the actual King Philip and still very cheerfully alive !

"Their Majesties King Albert II and Queen Paola thank you wholeheartedly for the comforting words received following the death of Her Majesty Queen Paola" which of course made the joke of the day.

When I came for the very first time to London to visit my son who had started to work there, I went to a supermarket to do some shopping. I had never been in one before.  I realized that our weight measures were not yet the same, and had to do the conversion. A year later in 1995 it was easier for me because besides the lbs the kgs were mentioned too.

What surprised me the most was the kindness of the cashiers everywhere I went. They greeted me with "Hello my love" and "how are you today" Never ever in my life a Belgian cashier had called me "my love" or even "my darling" I was used to sour looking faces who didn't even look at you or just said "Good morning" If I had a good day or not was not even a question.

I experienced the same with bus drivers, our bus drivers are not even polite, they just ignore you or grumble something if you don't show your ticket quick enough.

What a difference to be greeted like this when you have done your shopping and you pay ! I wished I could import this cashier's behaviour or at least that they learn to smile !

When I returned home and did my shopping I wasn't "my love" anymore I was just an anonymous transparent person and the first bus driver I met had a rant with somebody who only had a banknote and no coins ! 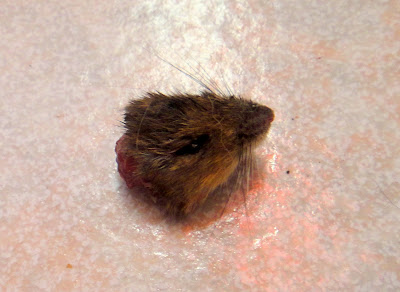 One morning in the kitchen, a mouse head looking at the cat bowls. A butcher couldn't have done it better !

In less than 200 days, Waterloo celebrates the bicentenary of the Battle of Waterloo. The festivities will take place over five days, from 17 to 21 June 2015.

The organizers expect more than 120 000 spectators. 5,000 soldiers will participate at the reconstitution of the battle with 300 horses and 100 cannons !

As there is no much time left and I live nearly on the battle field, I went there yesterday to see how the renovation works had progressed since my last post in January 2014.

MY WEEKEND OF JANUARY 31

On Saturday I went to the theatre where I have a season ticket together with Dominique and Nicole. As Dominique was on holidays, Nicole's daughter came with us. 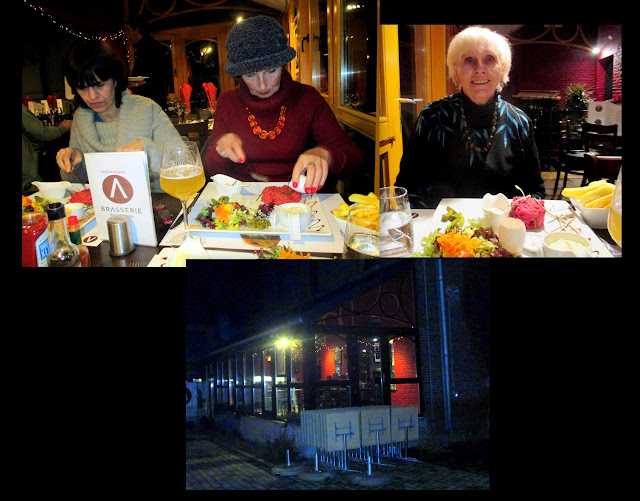 As usual before the play we went for supper to the theatre's restaurant, where we always order the same plate Steak Tartare with chips and salad. They have excellent meat for eating it raw !

The play was quite funny, it was the story of two men who met in front of the grave of a woman, one was the husband the other the lover for 50 years ! Of course the husband didn't know ! It began with fighting but at the end they became best friends. We had fun and we also were lucky with the roads, as the theatre is located in a little town in the middle of the countryside. Snow had been announced, but nothing fell from heaven. 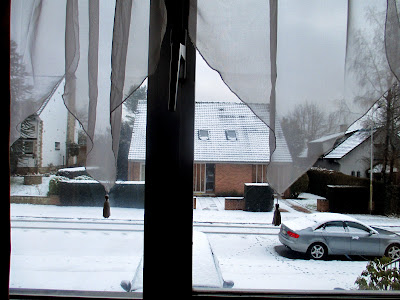 But Sunday morning, I had this view out of my window ! All in white ! 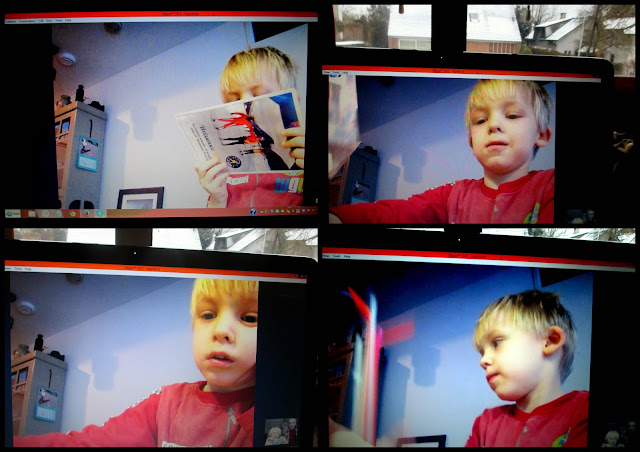 My son skyped me and I had grandson Toby on the screen, he showed me what he was doing and we had a little chat together. It was a long time I hadn't seen him, because my son was away the last two weekends.

On Sunday I wanted to go to Ilona to download Skype on her tablet, but it started to snow again and the roads were too dangerous. 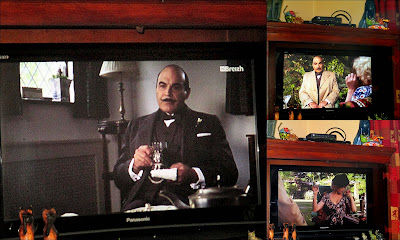 So I spent my time with blogging and Hercule Poirot and thought that these films are not good at all for the anti smoking campaign, because everybody men and women smoked like chimneys everywhere. The women had beautiful long cigarette holders an object you don't see anymore ! Fortunately these films are not yet X rated. 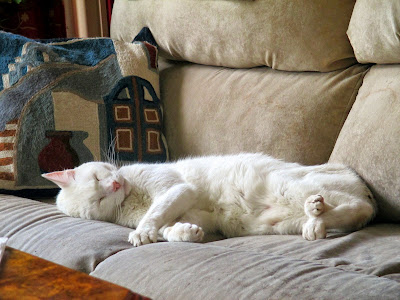 Arthur kept me company laying on the other sofa. He is not keen on snow either !
Posted by Gattina at 06:30 7 comments: