1. I had seen that the first mussels of this year had come out and couldn't resist to order a plate. 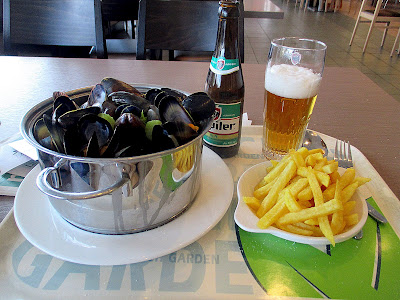 It looked and was absolutely delicious. Mussels and chips are one of the typical Belgian plates.

2. My nearly 17 years old cat had to have her last teeth pulled out, to avoid infections. 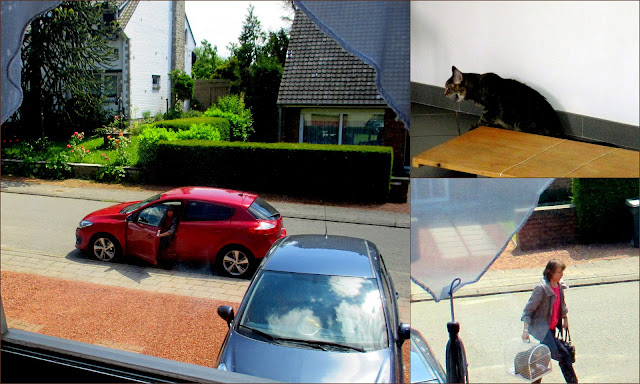 I dropped her off early morning and to my surprise my vet called me to say she will bring Pookie over because she was in the area and thought that way I don't have to pick her up ! I don't know any vet who would do this ! Pookie behaved like a drunken sailor, but the next day it was already better.

3. To know a little more about the renovations of the Waterloo Battle field site, for my volunteer work at the Tourist office, I drove there and had to state that the site is still not finished, 10 days before the bicentenary celebrations. 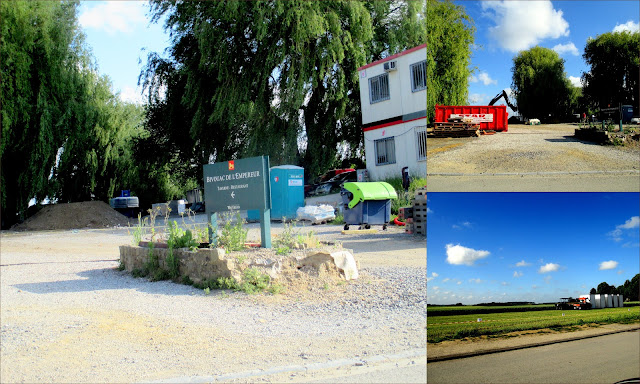 There was still a lot to do, at least the fields were clean now to put up the "village" !

4. When I arrived at the Tourist office to answer the phone 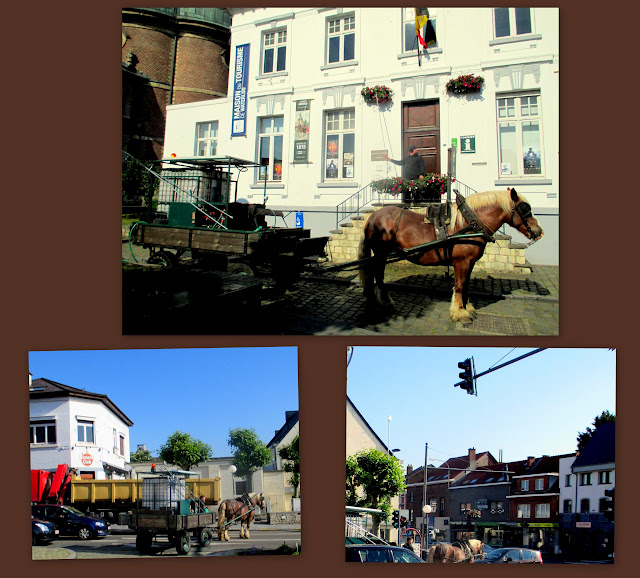 I saw to my surprise that a horse with a carriage full of water containers was standing in front of the building. It was real folklore, they water the hanging pots with the help of a horse instead of a vehicle !

This time I was very busy with answering more or less stupid questions, like "do you rent costumes for the battle" or "How can I drive my son in law to work, when all streets are closed". Of course they are not all closed, only around the Lion's Hill. Many also asked for tickets, but all the 180.000 tickets are sold.

5. I picked up Mr. G at the Brussels Airport late at 11 pm. To find a parking place was easy and according to Internet informations it should have been Parking 1. It turned out it was for arrivals. There was not a single soul and no numbers on the floor, in short no indication at all to find your way back to the car ! I took out a paper and noted how many colons I passed, that I had to cross a blue way and the exit was in front of the "Help Desk" where nobody was at this hour. I had to take the elevator down to the "Arrivals". Mr. G, didn't have a suntanned face as he should have, no he looked as if he came back not from Italy but from the Rain forest. He was happy to be back, after having been with two like machine guns talking girls, his sister and niece, and all the food they prepared for him twice a day ! I think this was the last time he went there he hadn't even seen the beautiful Garda Lake ! 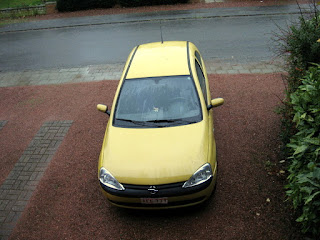 Some years ago I had a yellow car. I didn't order a yellow one on purpose, but I needed a new car immediately because my car had been stolen and I had to take the one they had in stock and that was a yellow car !

It didn't look bad, I wouldn't say so, but it was not very discreet. I could never have been a detective and follow a car with an unfaithful husband, a secret service agent or a spy. I was immediately noticed by everybody.

At the very beginning as owner of a yellow car I wondered why so many people had seen me and knew where I had gone. But after a while I understood. It was because of my yellow car !
The worst was when I heard from my car supplier, that I was the only person in the whole city with a yellow car !

So there was nothing to do, as long as I had my yellow car, I had to behave correctly, I couldn't go anywhere without being noticed : visit a lover, robbing a bank, dealing drugs or only be a drunken driver !

I had to have a perfect lifestyle and drive my yellow car without attracting attention, which was not always very easy ! When my yellow car gave up it's soul, I bought a black one, not a very good idea when you have four cats which take your car as their personal boulevard ! Now I have a white "goes everywhere" car and pawprints are less visible ! 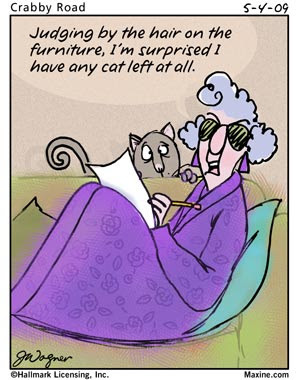 Most people know that Belgium is famous for its excellent beer, but what is less known is  that only  one hour outside Brussels — where busy streets are replaced with endless green fields, and the bumpy country roads are shared with tractors instead of shiny brand-name cars — is the Distillerie de Biercée, Belgium’s only fruit liquor distillery. Read more here....

After some shopping in morning, I sat the whole afternoon in our garden together with my computer.

My neighbor's daughter had invited friends for a birthday barbecue in the evening and she invited me too.

When I arrived three Harley Davidson were standing in front of the house. 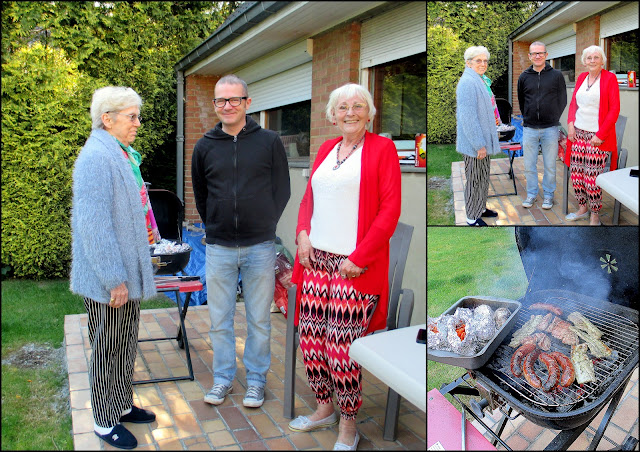 We posed in front of a delicious looking barbecue. 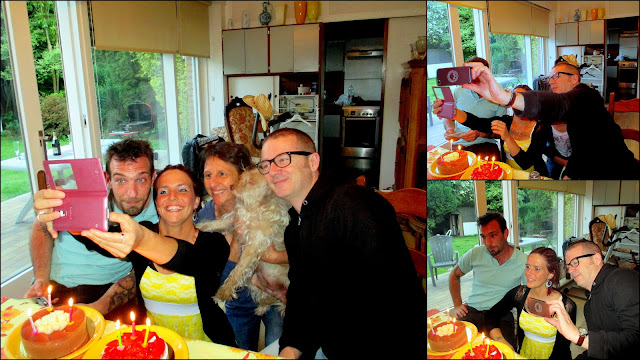 When everything was eaten up they took selfies with the birthday cakes, and we had a lot of fun.

On Sunday I started my first working day as a volunteer tourist guide for the Waterloo battle bicentenary. 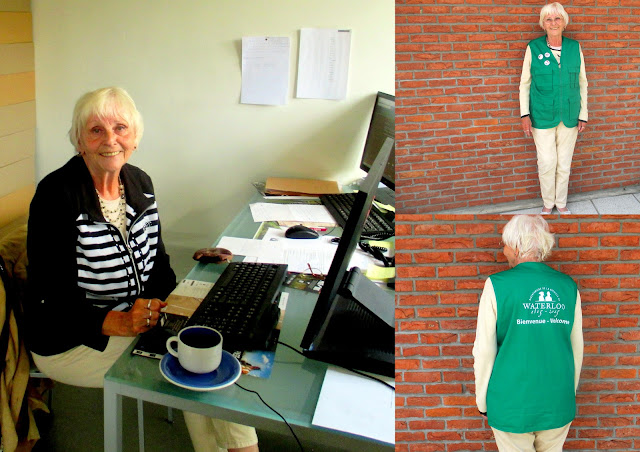 I had to answer the phone for German, English and Italian tourists. The vest I have only to wear outside. On the three pins, the languages I speak are written. To answer the phone was not very difficult, mostly they wanted to know if there are still entrance tickets, but for all the three re-enactments all 118.00 tickets were sold. Tourists from around 60 countries are expected. Some of them also asked if it is suitable for children under 10, but they are not allowed, the battle is too frightening for them. 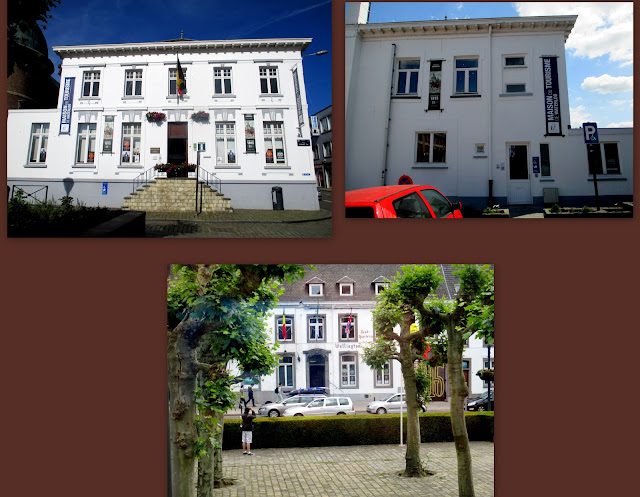 and this is my temporary "office" the Waterloo Tourist center. Just opposite of the building is the Wellington museum.

In the afternoon my friend Chantal came over for a coffee, and I told her all about my first day.
Posted by Gattina at 06:00 13 comments: