Apparently vintage people remember more the past then what they did during the week ! I think I also start ! But still I managed to remember.

I was quiet tired when I started the week because I had just come back from France on Sunday. 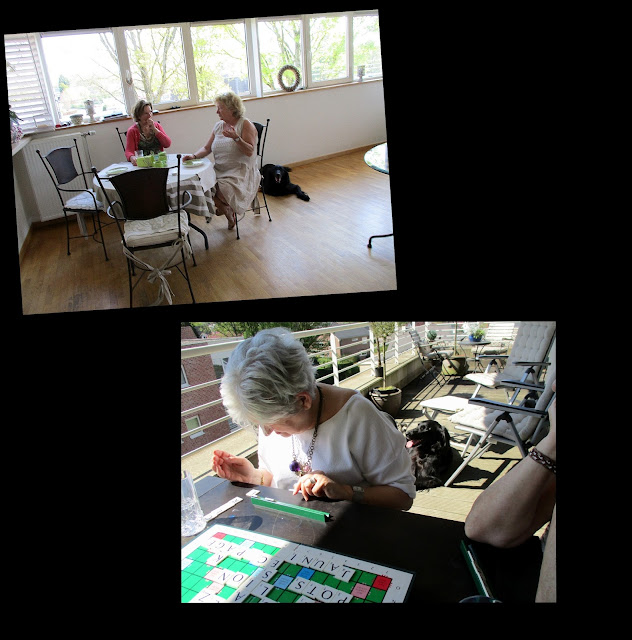 Although I felt lazy I pushed myself and went to join my scrabble girls. And that was good because I forgot that I was tired and wasn't the last.

My grandson Toby (7 years) with help of his school started a business and they had chosen his design to sell on mugs etc. 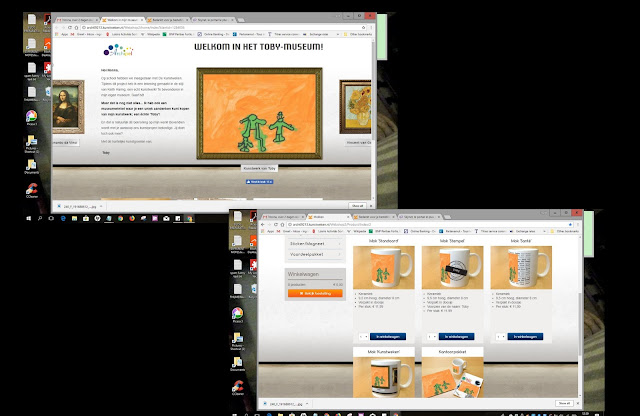 He had his own webpage and the items were sold for the benefit of the school. I ordered a mug !

I did some laundry and spent the whole day quiet behind TV and Computer, I had my medication for the lungs changed and had to get used to it. It made me a little dizzy and tired. 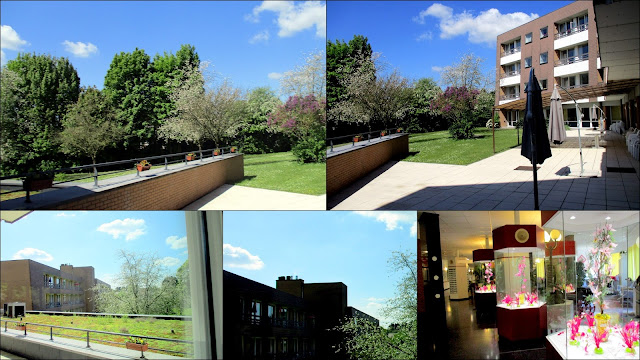 I went to my painting class, but didn't paint I really felt too weak, I even forgot to take photos for our Facebook page, but I took some of the retirement home where we paint and its beautiful garden and the nice inside decoration. 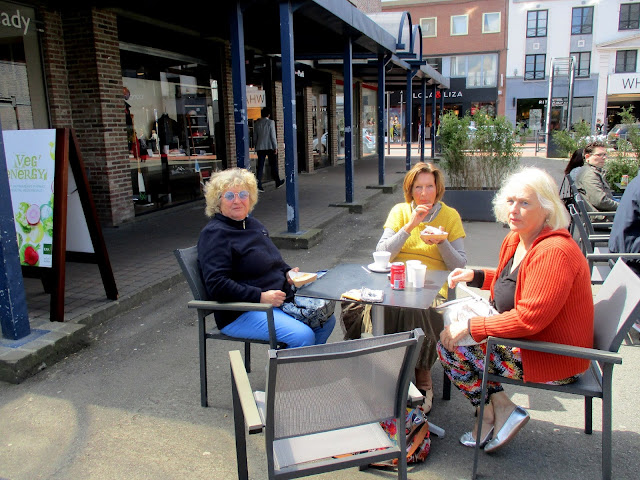 After the painting class we went together in a little snack and could even sit outside in the sunshine. It's starting to get warmer. 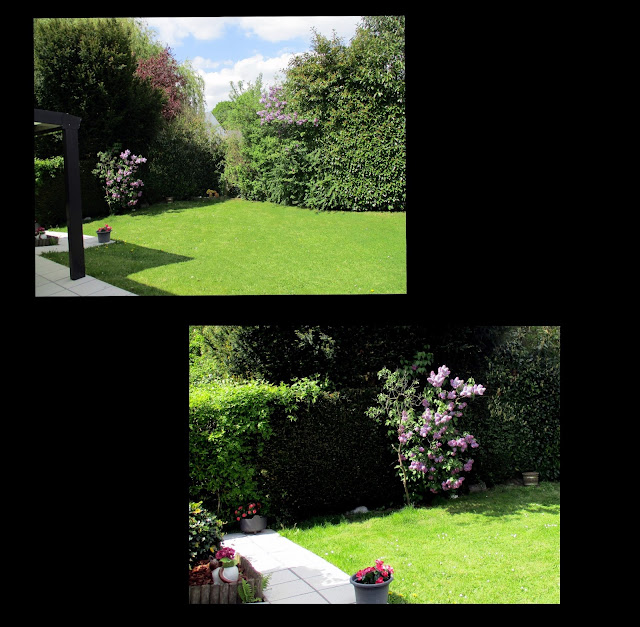 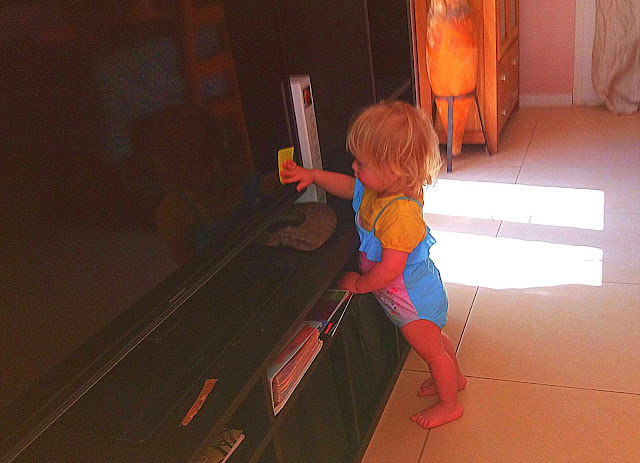 
1. April showers bring May flowers or so the saying goes. Is there a flower you associate with a particular memory? Explain.

In Belgium it is the use to give a little bouquet of a lilly of the valley which is our mayflower  to family friends and neighbors. You can see stalls all along the main roads, or children selling little bouquets. 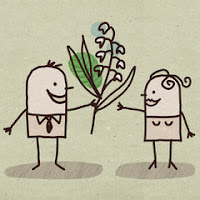 This year it had been too cold, they are just coming out, but I could offer some to my friends.

2. Last time you helped someone? Tell us how.

I gave some tips to a young woman who was looking for a job and was quite depressed that she didn't find any apparently it helped she got other ideas and was suddenly cheerful and full of hope. She speaks English which is rather seldom in France so she has even more chances.

3. It's National Salsa Month (the food, not the dance) so tell us, do you like salsa? Hot, medium, or mild? Homemade, store bought, or from your favorite restaurant only?

I don't know salsa it looks like chili con carne sauce when I googled and found a recepe. I would rather try out mild ! I don't like it too spicy.

I did a lot of roller skate with my friends and we started listening to Elvis Presley and I bought my first record. He was in Germany as soldier at that time I guess. 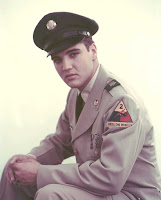 5. It's the first of May so let's run with it-first things first, don't know the first thing about it, first dibs on something, first impression, first rate, first cousin, first string, first come first served, at first light-which phrase can best be applied to something in your life currently or even recently?

Difficult to answer that question at my vintage age ! It all had been probably, nothing is first !

I just got back from the South of France where it was very warm, (see post below) and now I think that I am sitting here in a thick pullover with the heating on and think what I all have to do in the next days.

I spent a week in Ollioules where my friend Claudie lives. It is located between Marseilles and Toulon, a sweet little town where the time stood still a little bit the Italian style, because sometimes I got the feeling to be in Italy. Only the people were speaking French ! 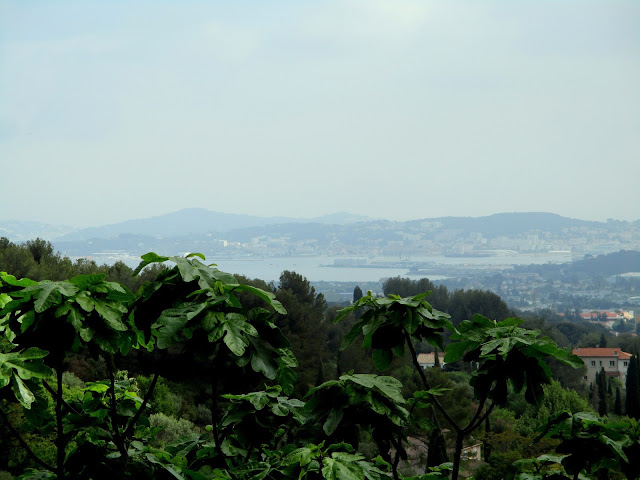 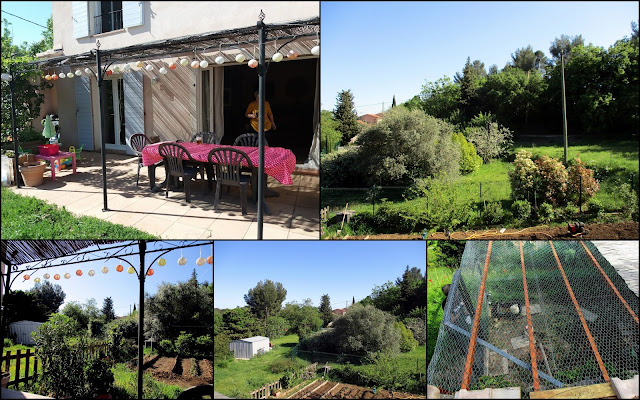 The terrace where I lay in the sunshine, the garden and there were even chicken ! 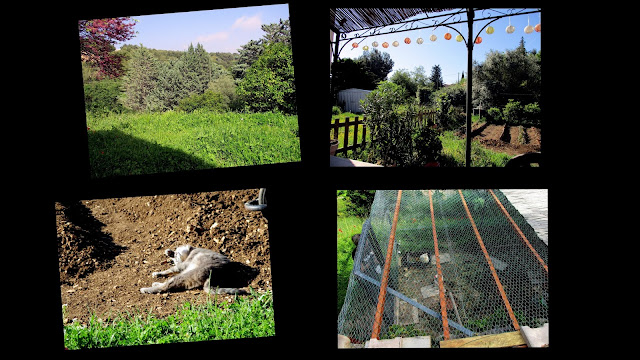 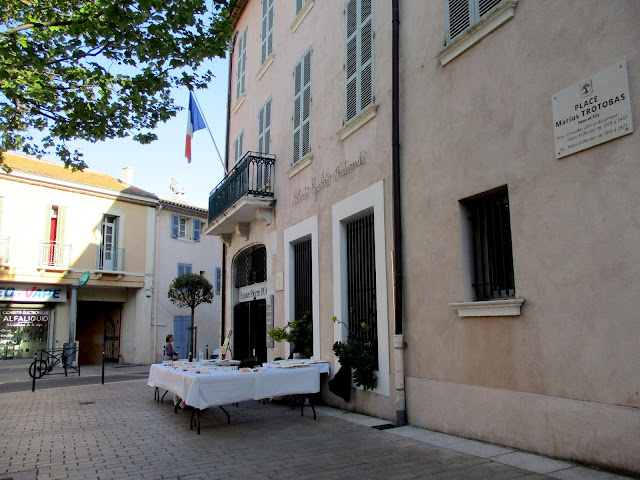 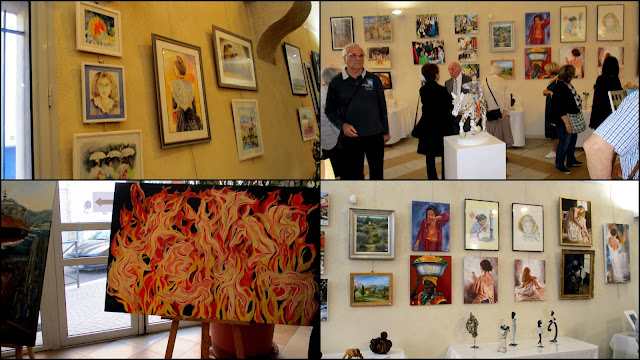 The exposition was real nice 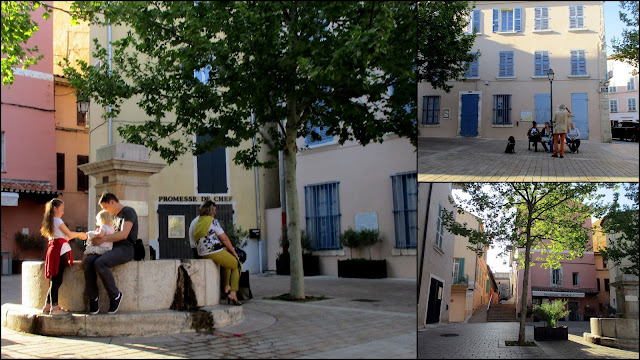 It was in the middle of the town where nothing had changed. People now use the well to sit down and chat. 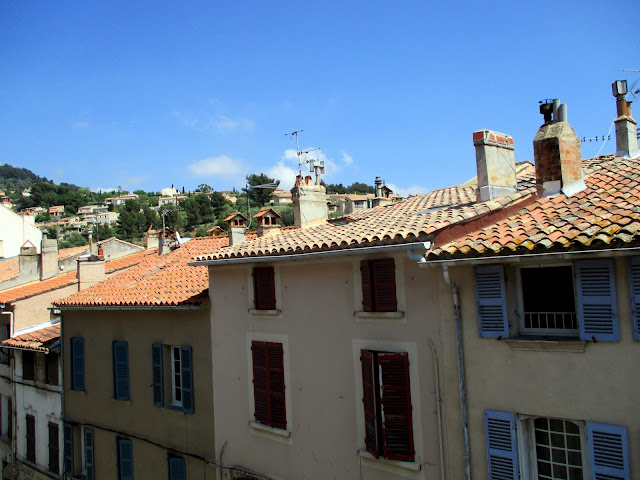 Claudie's daughter lives in the center of Ollioules in an old house on the 4th floor. I took the pictures 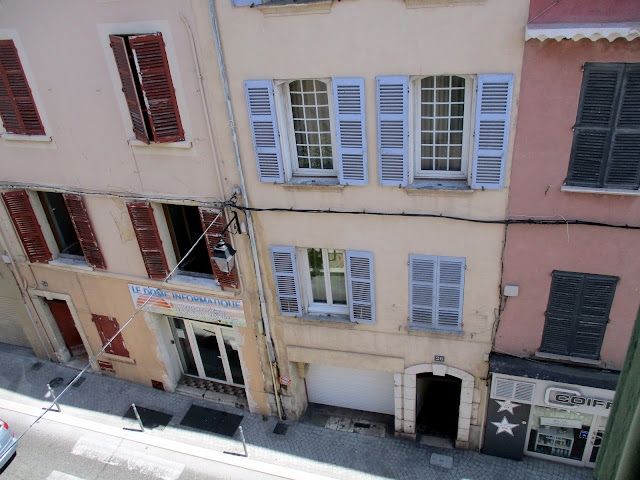 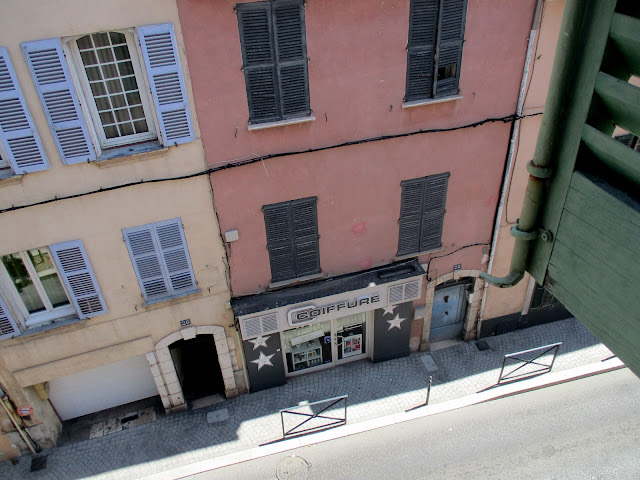 out of her window 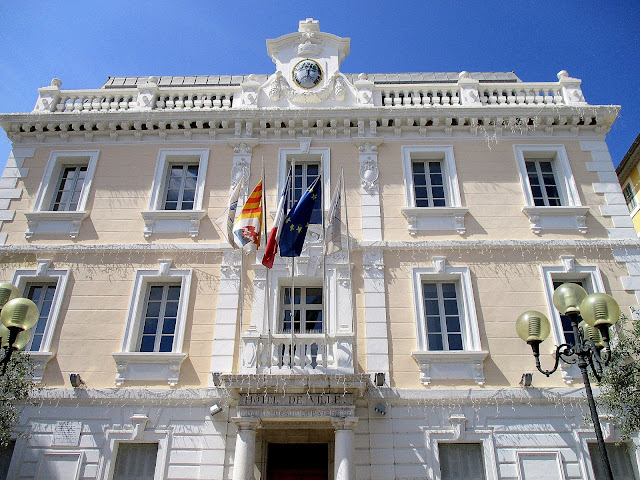 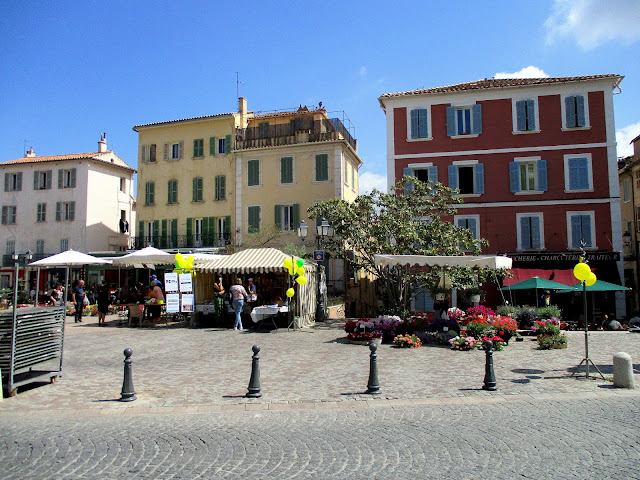 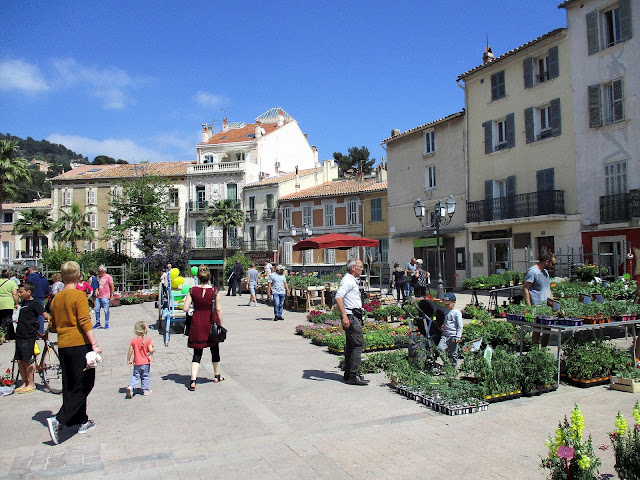 and a flower market 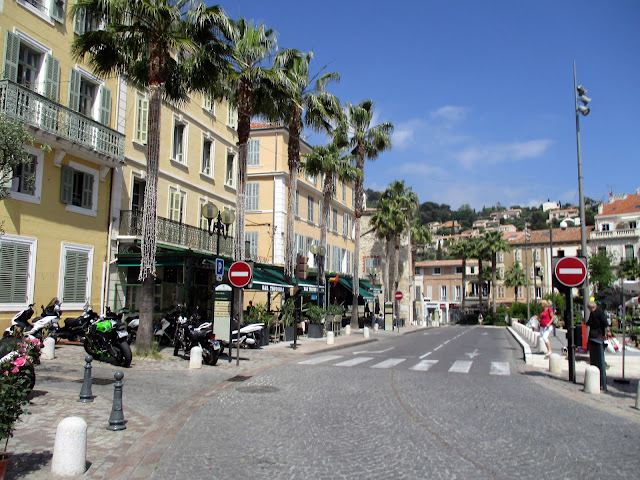 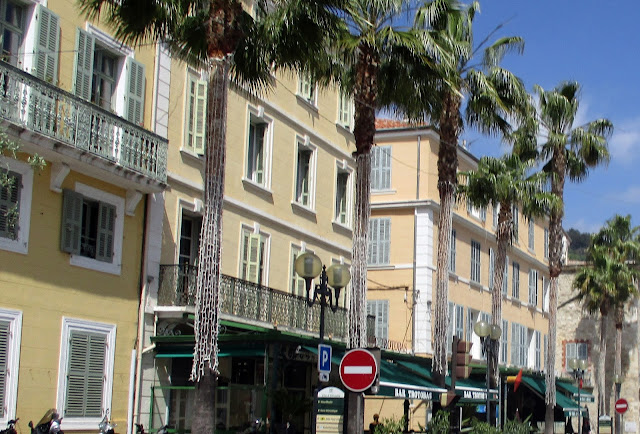 The palms were covered with a net, protecting the stems from insects killing the palms 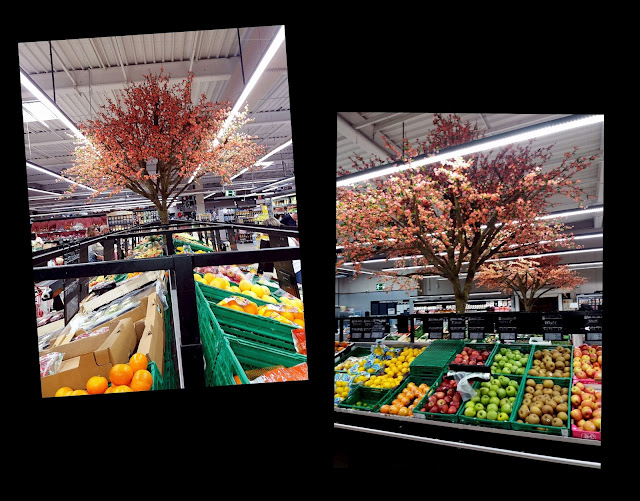 We went to a super market which looks so colorful. I noticed that the prices are more or less the same as in Belgium.

On Sunday I flew home into the cold and stormy weather. The French air traffic controllers were on strike with the result that we sat one hour in the plane before taking off !

Probably due to the wind or the pilot wanted to catch up the hour, we were shaken like a dog's tail when he sees a bone ! It was terrible, the hostesses couldn't serve food or drinks and no sell on perfumes etc, they had to sit the whole flight attached with the seat belt !! We also had holes where the plane lost height. Fortunately me and my female neighbor weren't afraid, but the man besides me was in panic and a lot of others too ! We landed with a strong boooommmm, but safe and sound.