Today we start our second week at the Red Sea in Egypt. 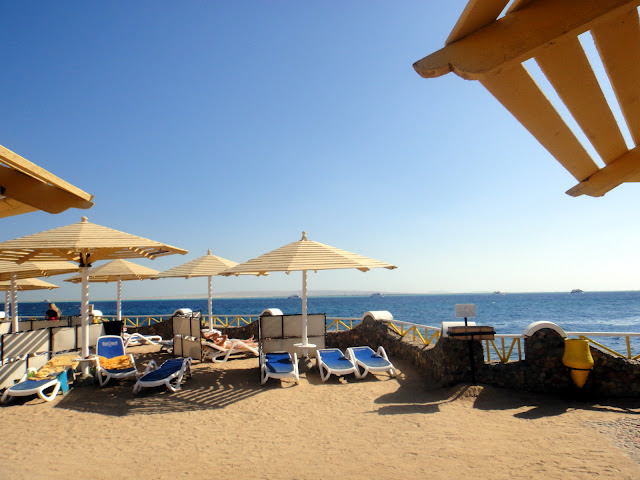 selecting the place and put the towels on the beach beds

After swimming getting dry

Observing people, not the Western world tourists but the Egyptian once.

Grandparents with two grandchildren, the girl in a Bikini ! I didn't want to take a picture it would have been too rude. 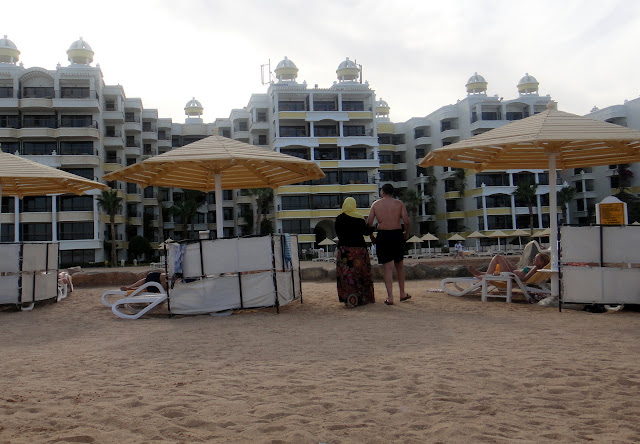 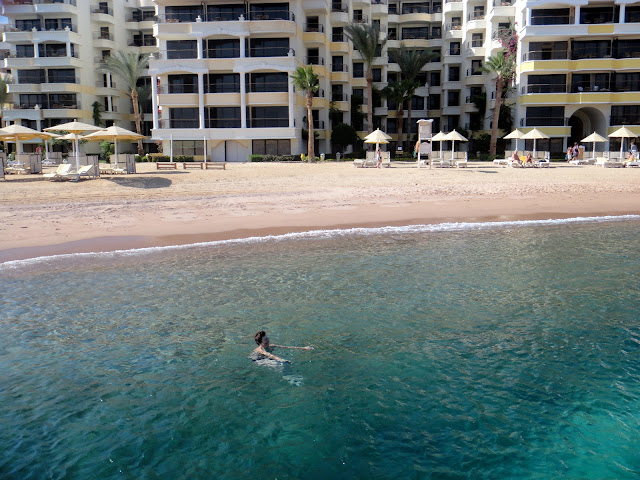 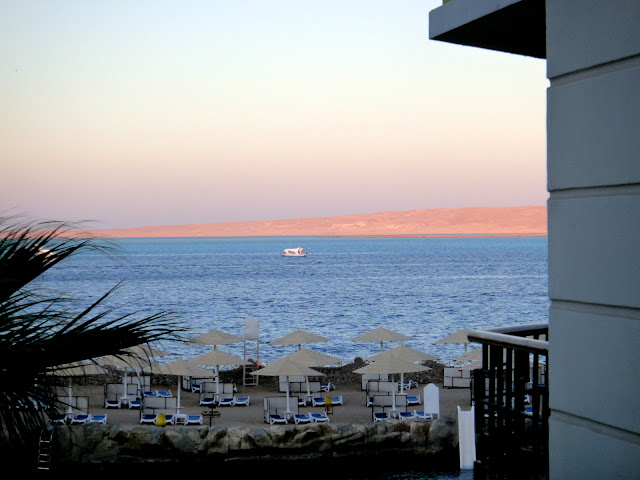 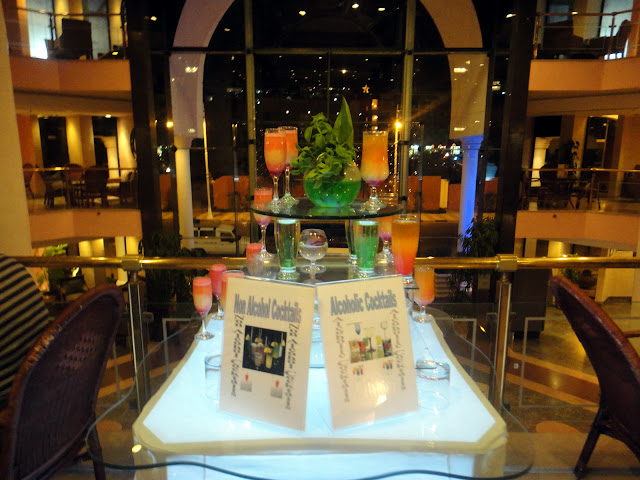 and drinking our apperitif on the second floor

5. After supper there are shows like here the whirling Dervish 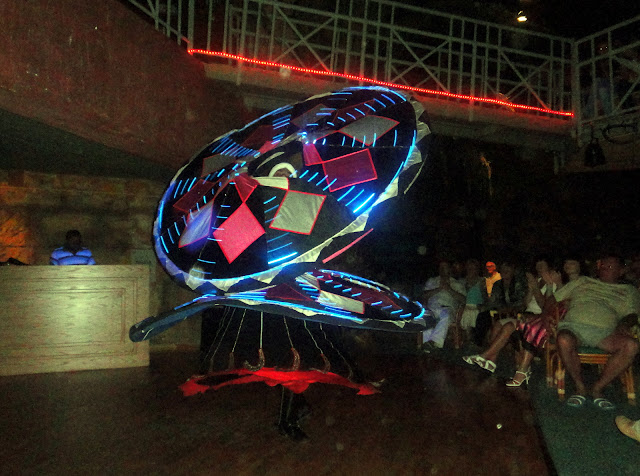 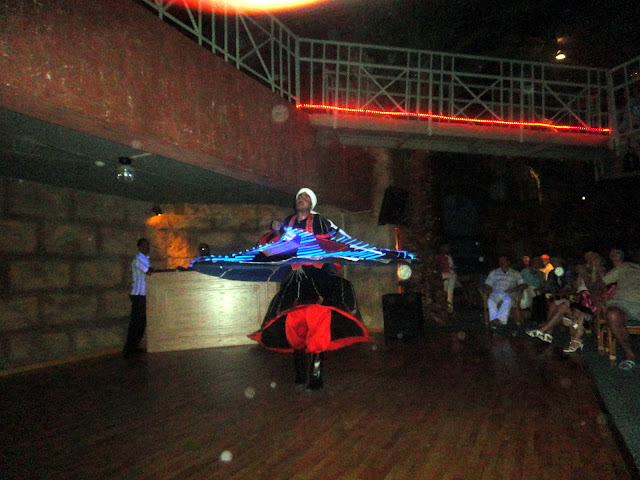 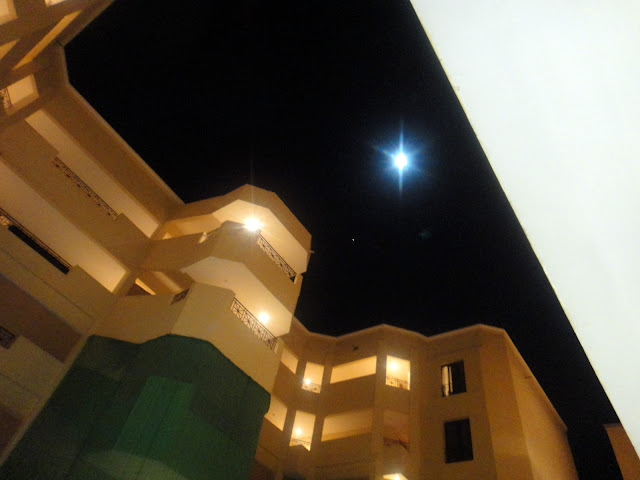 and observing the sky with full moon and lots of stars.

Now you understand that we had an exhausting week !

I WILL BE WITHOUT INTERNET UNTIL MONDAY
Posted by Gattina at 05:00 14 comments:

Each morning it is the same scenario. To get a nicely placed beach bed you have to be early. There are really enough and for everybody. So far in this hotel people are very civilized and wait until the office opens at 8 am where against two cards with your room number you get two towels which are then brought by a beach boy to a place of your choice. Very nice.

But there are always people without any scruples who go over corpses to get the beach bed of their choice. For that all means are good. Some are getting up at 5, put a shoe a bath towel or a magazine on the beach bed and return to bed until 10 while others put on their alarm clock to be at 8 am sharp at the beach office.

Fortunately these people have no chance anymore. Everything is removed before 8 unless you sit yourself on the beach bed. That's why so far there weren't any problems. But in the hotel where I stayed two years ago it was a real war with the Russians, they pushed everybody aside, stole the beach towels or they took them into their room for the whole week so that they could put them very early mornings on their beach beds.

After swimming in the warm sea, I am drying on my beach bed before I put on a dry bathing suit. 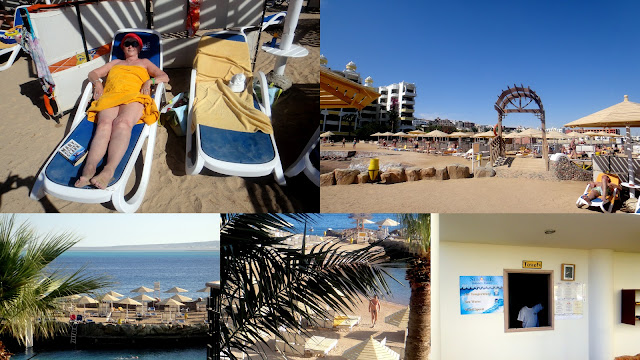 Empty and full beach beds and one who put a yesterday's towel at 7 am ! I watched him from our balcony ! Watching people and reading is a lot of work in one day !
Posted by Gattina at 05:00 15 comments: 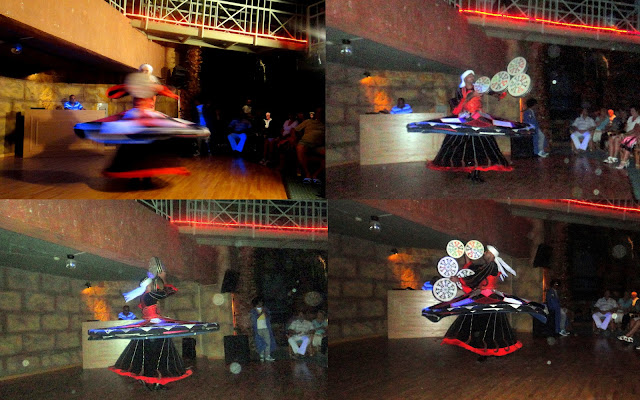 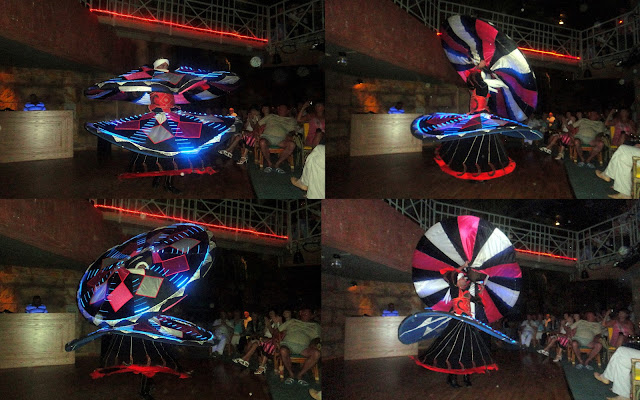 Show of a Whirling Dervish 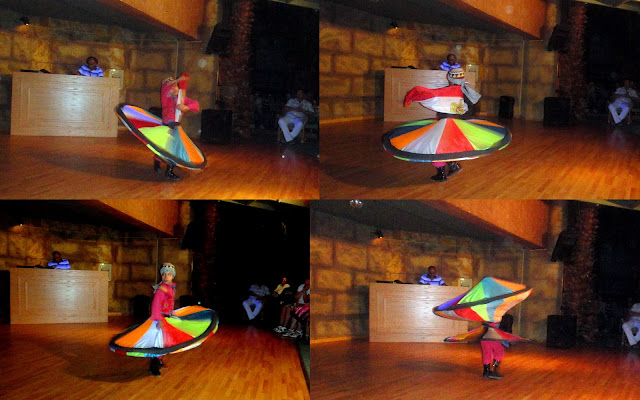 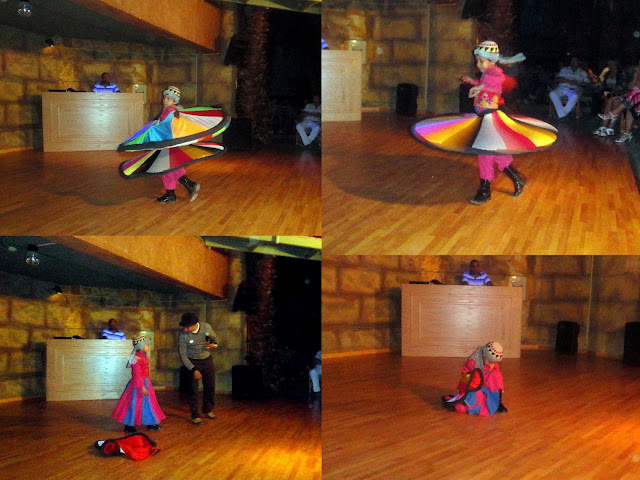 and his little 7 year old son


I am actually in a very sunny part of our world. In Egypt at the Red Sea. While at home the trees loose their dress and become naked, it IS cold aNd people have to put on the heating, I am laying at the beach and enjoy the sunshine and the warm weather. 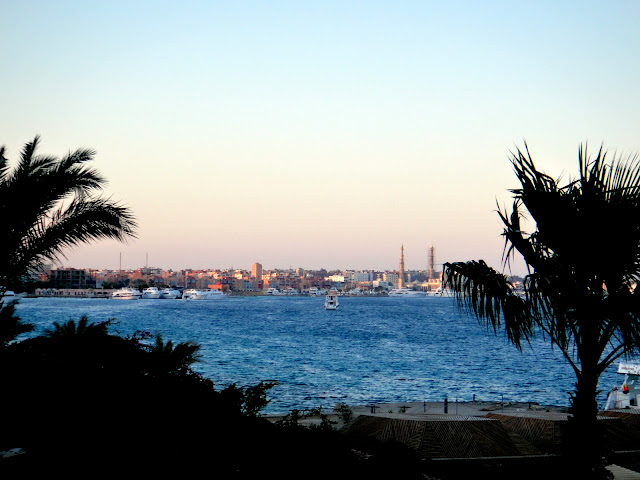 The view from our balcony to Hurghada 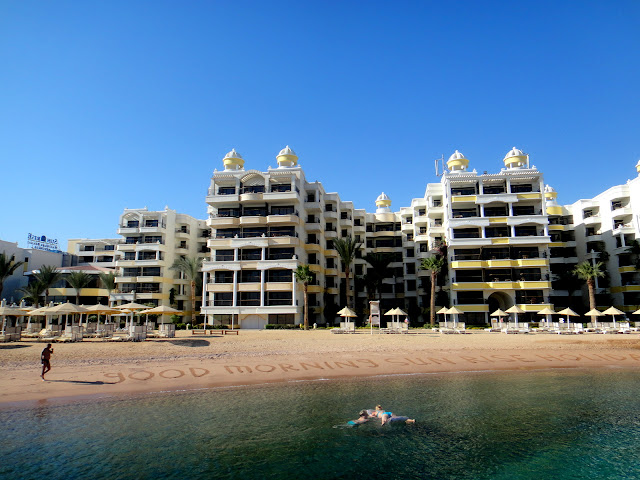 We are welcomed at the beach with "Good Morning Sunrise Holidays" somebody has written in the sand. 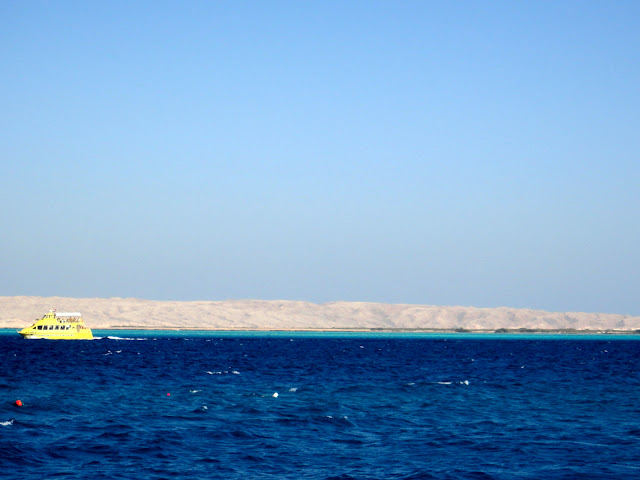 View from our beach bed 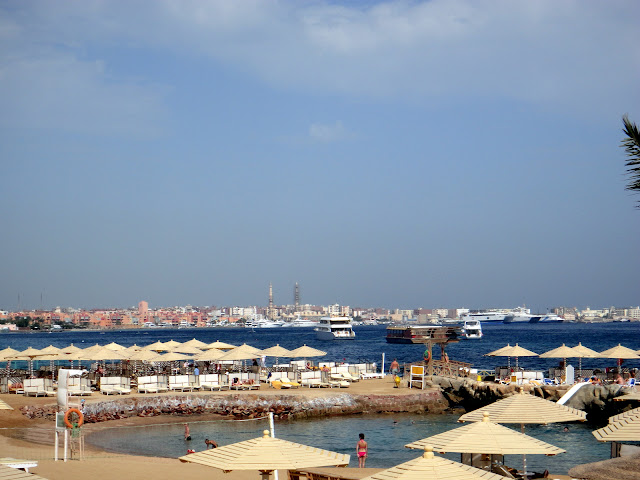 and the beach itself 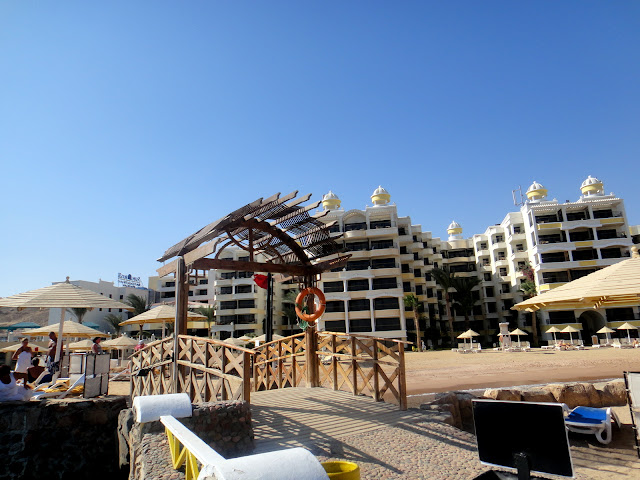 A little bridge leads us to our place 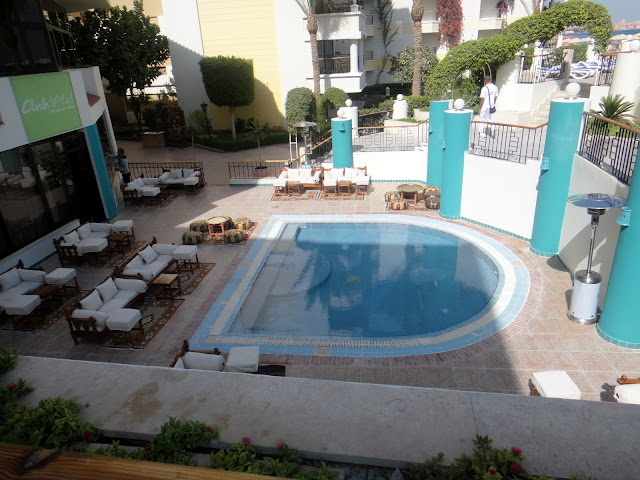 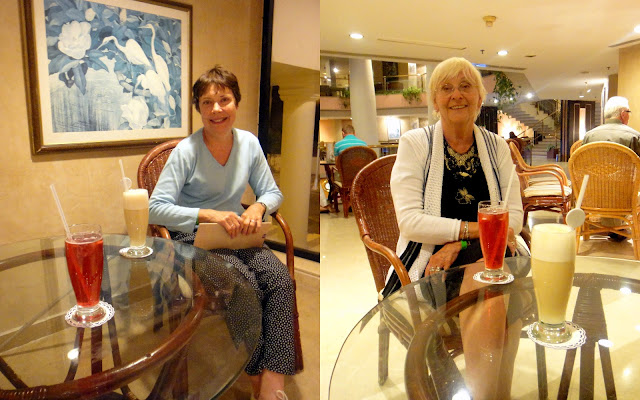 Chantal and I with our drink before supper 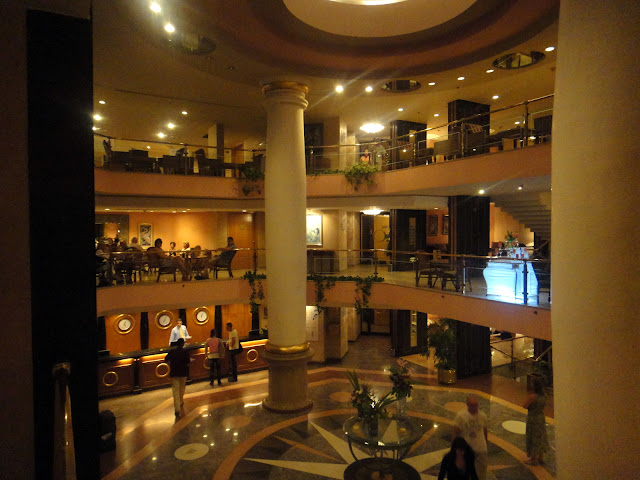 view on the reception and the bar on the second floor 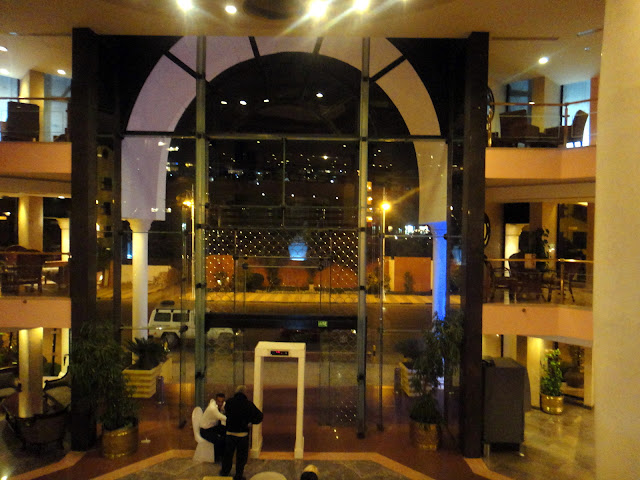 Of course we watch who goes in and out 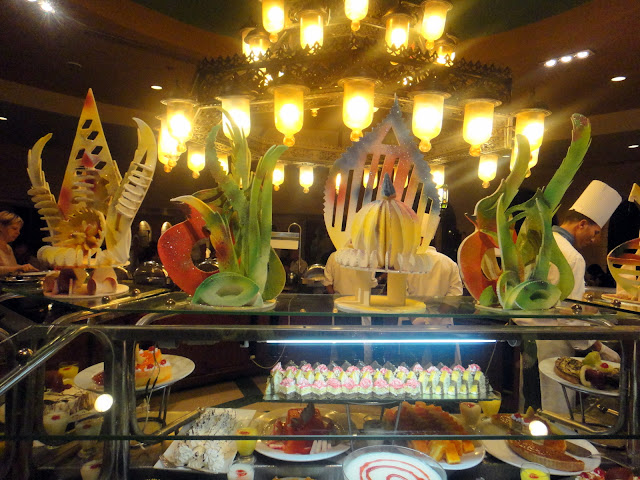 The buffet is always decorated by real artists ! everything you see is made out of fruits and vegetables.
Posted by Gattina at 09:30 20 comments:

of Nov 5. If you participate please put the little logo on the top of your post and leave your link.

Our weekend was very exciting ! Breakfast at 8.30. Before getting a towel, choose a nice place and put the towel on the beach beds. After breakfast laying in the sun and when it's too hot swimming in the sea surrounded by little fishes and some human whales. Of course also reading and observing the other guests. Unfortunately this year everybody looks so normal !

These activities are interrupted by lunch at 12.30, and then we "work" again at the beach. When at 3.30 pm the sun disappears behind the Hotel it's getting cool in the shade and we return to our room.

And then our weekend troubles started. While I was still chatting at the reception, Chantal tried to get into our room. No way. She lifted, pushed, pulled the doorknob without any result. She came back and told me she couldn't open the door. I followed her, took the key put it in the keyhole turned, and the door opened. Chantal was surprised : "that's impossible" she said because she had tried for 10 min without success. Feeling stupid, she closed the door again (for our security I remained inside the room) opened it and it went without problem. We laughed but she still felt offended because of this stupid door. When we had showered and were dressed, we wanted to go for supper. I turned the doorknob to open the door, the door remained closed. Chantal tried, I tried, we were locked into our room. No way to get out.

I called the reception and told them that we were locked in inside the room. Omar, Hassan or Mustafa probably thought "again this woman", but they promised to send somebody to open the door "immediately" we sat down and waited. Of course nobody came. After 10 min I got angry, we were hungry and wanted to get out of the room. I turned the doorknob and .... the door opened without difficulties and we found ourselves nose to nose with the guy who had finally arrived to free us. We felt rather stupid.

When we came back the door opened without any problem. In the morning we were again locked in and our male chamber maid got us out after whe had shouted for help. I asked for repairing this rotten lock and of course they promised to do this later. Now I don't know when "later" is maybe in a year or so.

Then it happened that we wanted to get into the room again and this time the door opened but the security tongs had fallen down so the door only opened a few centimeters or inches. 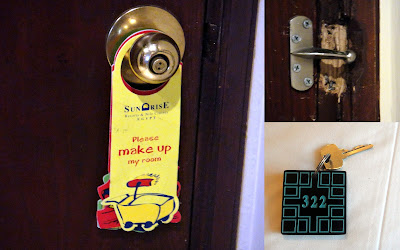 Two men tried to lift that thing with the door hanger "Please make up my room" which of course didn't work. Finally one brought a screwdriver and the other a hammer and they managed to get the door open. Now we are without security and maybe I won't post tomorrow because we were kidnapped.

But despite this adventure our weekend was very nice ! 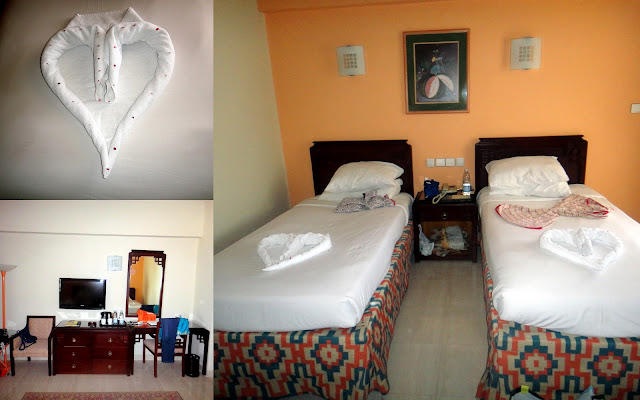 and our room which a very friendly young man cleans and makes hearts out of our bath towels and on them rose petals ! Isn't that romantic ?

Now each time we have to go in or out it's the big question : "Does it work ?"

At least one man told me the truth the lock wouldn't be replaced because the whole hotel gets new once not working with a key anymore but with a card.
Posted by Gattina at 06:00 6 comments:

Labels: humor, key story, What did you do this weekend ? Hurghaday

INTERNET FOR WOMEN OF THE 3rd AGE ?

The first thing I did once the suitcases in our room, was asking at the reception about Internet connection. Behind the counter stood 3 handsome tall guys, one a kind of Omar Shariff at the times of Doctor Zhivago, a George Clooney/Mustafa and a Pierce Brosnan/Hassan.

When I asked for Internet, the 3 made eyes like saucers and probably thought that I was a little disturbed. Finally "Omar" told me to go to the Internet café. I asked him if it was still at the same place as last year and he said yes. So I crossed the huge hall, went to the shopping area and entered the door where the Internet café was last year and where I had to buy a card to get a username and password for my computer.

Instead, I found a barman behind his bar and a big snooker table in the middle of the room where the computers had been. He told me that I had to go to the reception, buy a card and ask all information over there.

I felt like a ping pong ball. I went back to the reception, and as Omar was busy on the phone Clooney/Mustafa smiled and told me to go to the 4th floor where the Internet café was now. I said I don't want to go to the forth floor, I just want a username and password and that I had my own computer, I turned around, went to my room and came back with my little Notebook.

A chaos broke out. Omar dropped the phone (or nearly) Brosnan/Hassan left his German clients and they all gathered around me to admire my little notebook.

They called another guy the computer specialist who would come immediately and help me for the username and password. Knowing that "Immediately" could last at least 1/2 h I said they should call me when he is ready and has what I need. But this time like a flash he came out of his boxroom and then suddenly all went very quick. Probably he wanted to show me that he too was able to handle a computer ! In no time I had a username and password written on this little piece of paper, because in their surprise to find a woman of the third age able to handle a computer they forgot to give me their sophisticated new card they were so proud of and which they had shown me before. 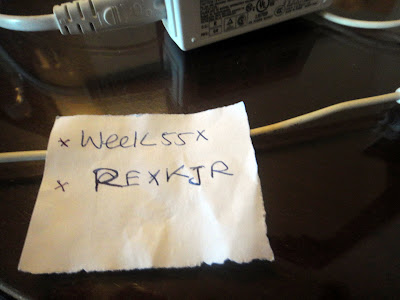 I didn't care, the most important thing was I now had my internet connection.

Ever since when I cross the hall, the three beauties give me a respectful smile and ask if everything is OK. I smile back feeling like the Queen of England.

So I saved the reputation of the 3rd youth women, and that we are not all complete idiots in this male world when it comes to Computers ! 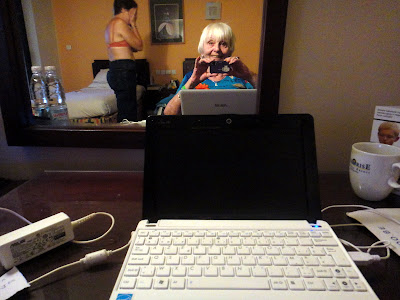